My coworker loves to cosplay, and one of his favorites to do is Conan. His new girlfriend wanted to do a cosplay for Wondercon, so they decided on Red Sonja. He ordered the bikini online and she had the boots, but they came to me for the gloves, leg bands, and sword.

We agreed on terms about a month before, and due to obligations I had only a couple weekends and some small time during the weeks to work.

Reference
The reference we decided to follow was based on the comic books. The legband style was based on a cosplayer I found on Deviant Art

Gloves, Leg Bands, Sword
Build posts to follow. The Sword really wasn't anything other than an eBay foam LARP sword with some spare leather wrapped around the handle. The tip was all wonky from the mold, so I did some cleanup on that too

Wondercon Pictures
And finally, here are some pictures of the final result! This is her very first cosplay, and I think she did an AWESOME job embracing the community!

I've never made gloves before, so I did a lot of googling before deciding on an approach. Originally I wanted to use a heavily interfaced stretch pleather, but I couldn't find the right thing at the store, and my samples came in too slow from Spandex House. Plus after making a mockup in some spare pleather I had laying around I decided it would be much too hot.

Instead, I ended up with a pigskinsuede split from Tandy,thinking it would breathe more. It is a 1 - 1.5 oz hide and was approximately 6 sq feet according to the site, although I feel like mine was closer to 4. For the pattern I used Butterick5695 because it was laying around in my stash. I knew all those 99 cent pattern sales would come in handy for something.

When laying out the pattern I was trying to make the fourchettes on the thinnest part and the cuffs/gauntlets on the thickest, but to be honest the whole freaking hide feels pretty tough when you are hand sewing!

Even with glove needles sewing the fourchettes in was very very tough. I was able to do machine sewing on some of it, but the corners and finger tips had to be hand sewed.

The cutouts are from the reference pictures and are surprisingly sturdy. For the cuffs, I used fusible interfacing on the lining (which was a polyester whatever), then reinforced the cutout with another piece of interfacing after I folded the edges in. I determined the flare by slashing and spreading myprototype.

Overall I'm pleased with how they came out. The fingers are not as even as I would like them to be, but once they are on the flaws don't show as much. I mean.. I made GLOVES! For some reason that is so much more satisfying than the normal things I make! 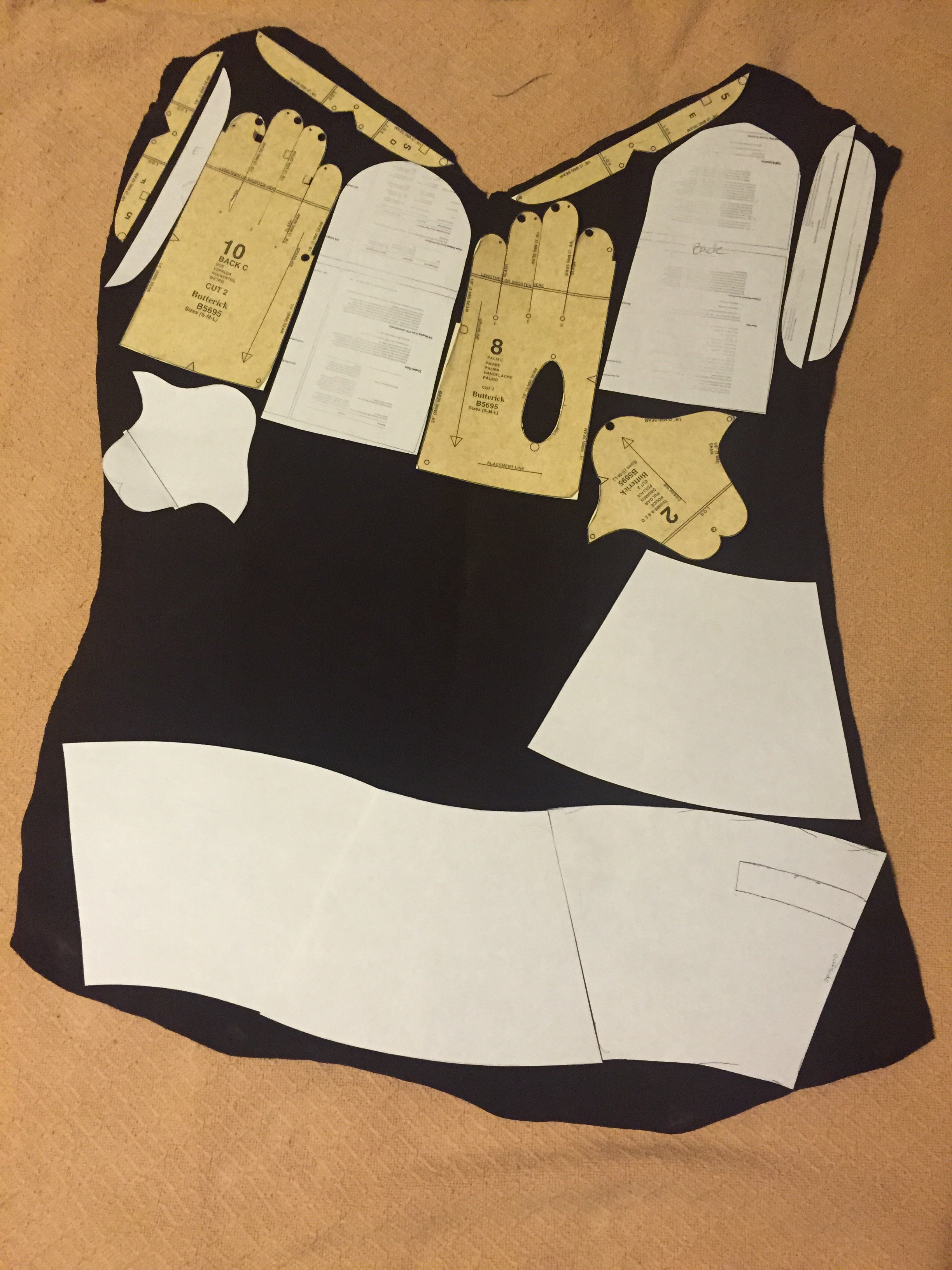 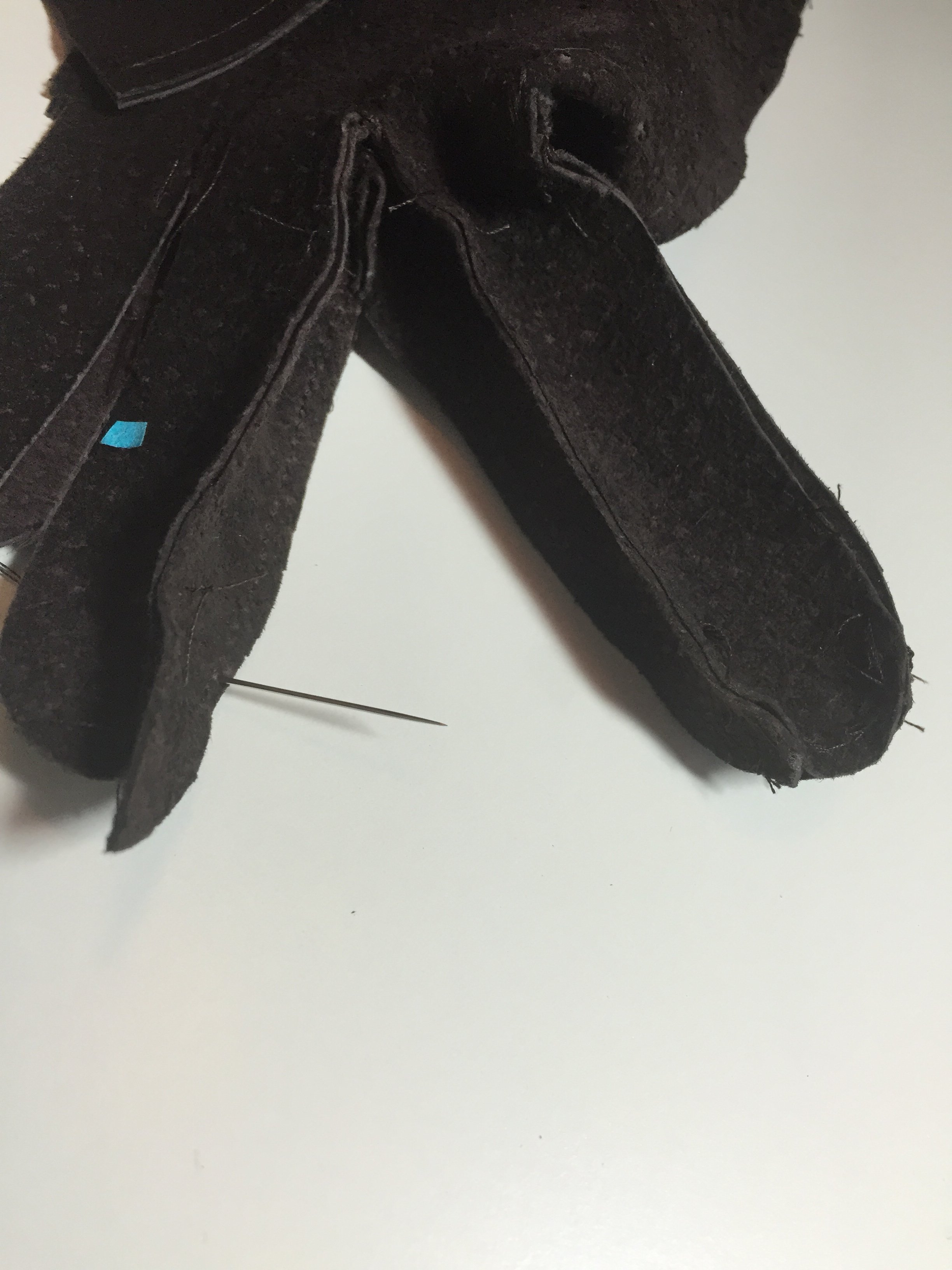 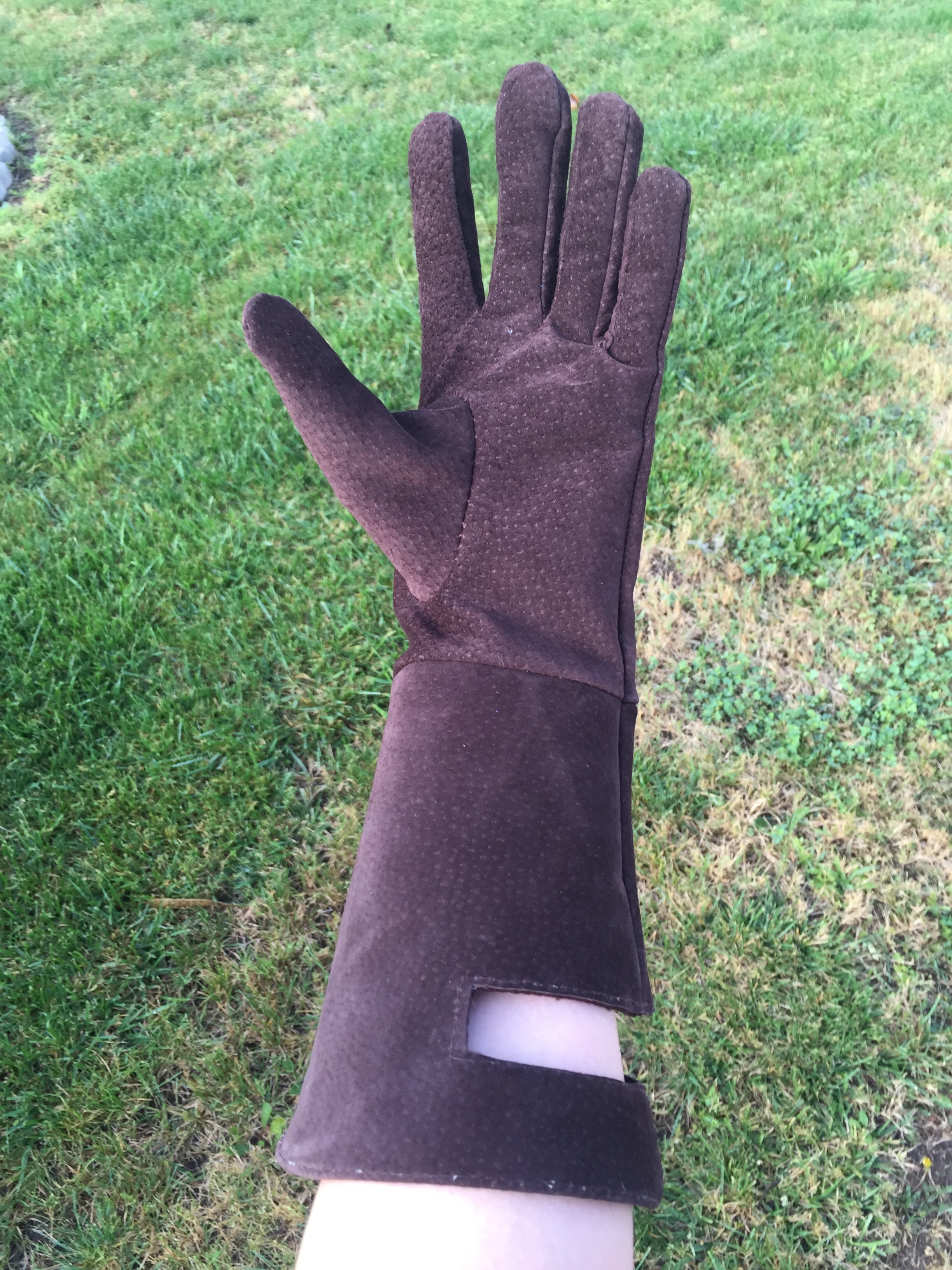 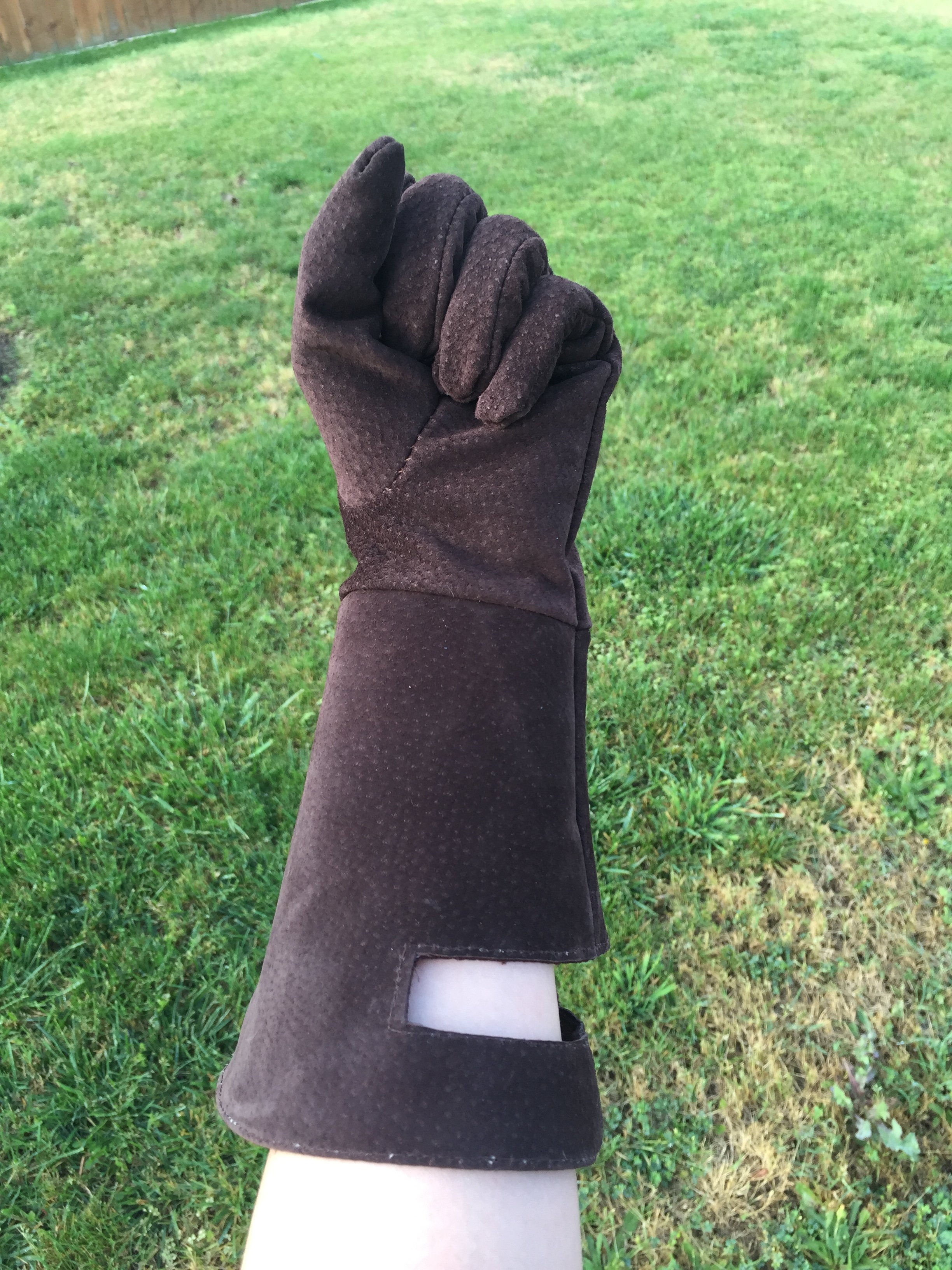 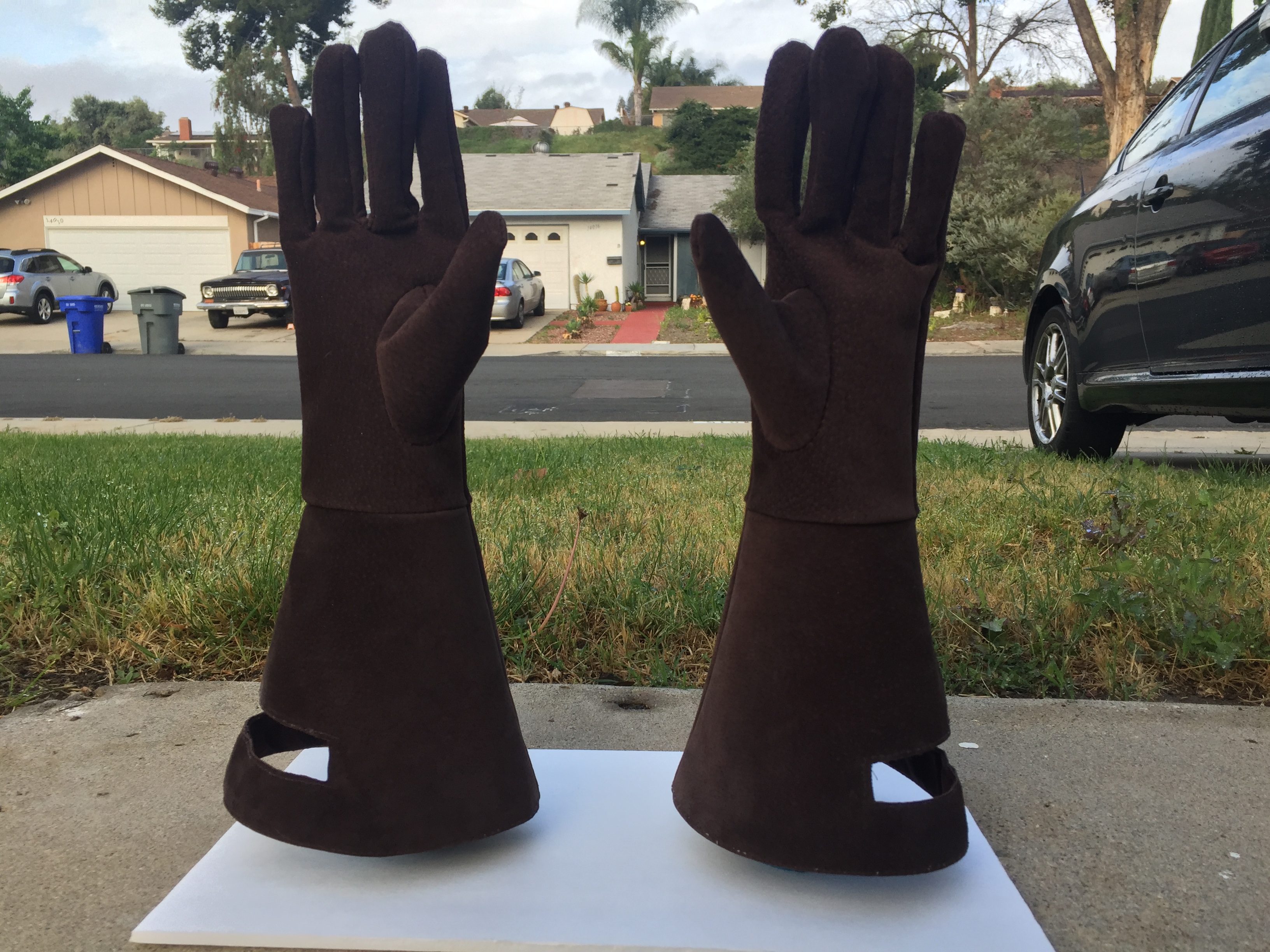 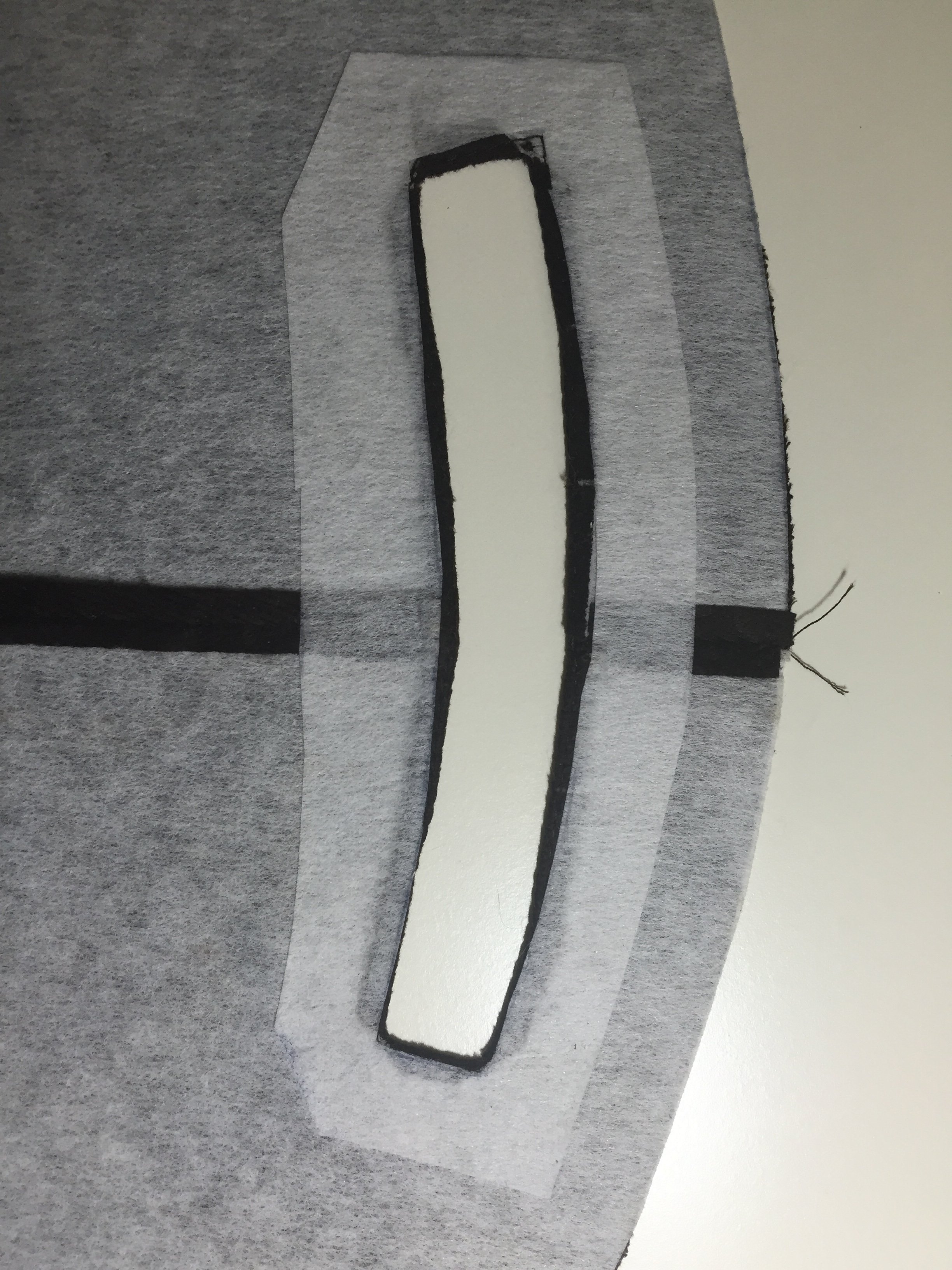 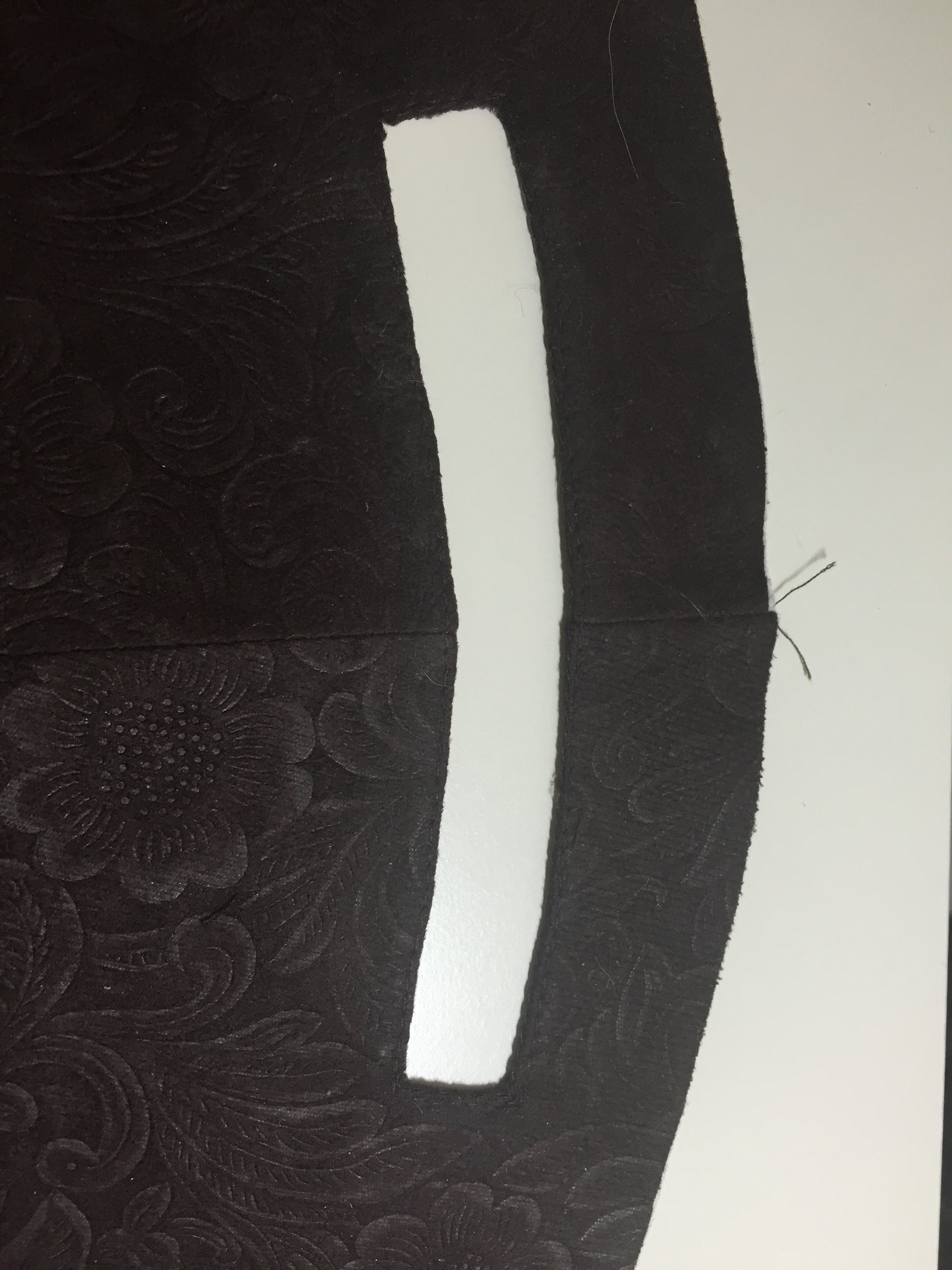 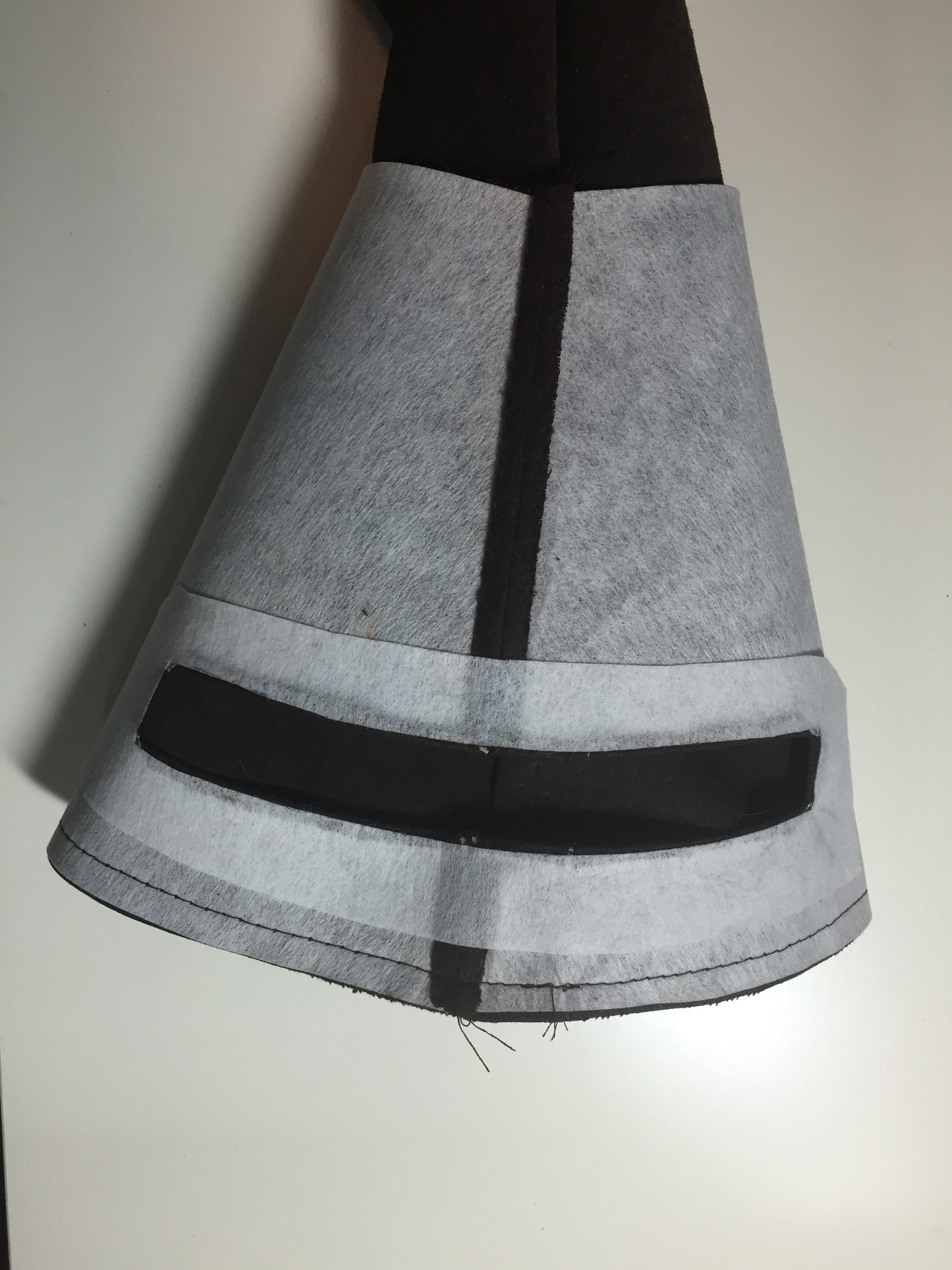 The leg bands were constructed out of worbla, craft foam, elastic, and some leather.

The pattern was free handed and roughly based on the cosplay reference above. I was going for a sort of hammered look. The bands ended up being about 1.5" x 15". I wanted them to wrap most of the way around the model's legs (19") but not all the way. The core is two layers of craft foam (one cut, one not) and then wrapped in worbla.

This was my first experience working with worbla and it was a lot of fun. Definitely understand why everyone loves this stuff! After wrapping the foam, I used the heatgun to soften the material and work it into the depressions created by the foam. The round head of a pin worked surprisingly well. Then I added D rings using worbla scraps as fasteners. The rings move freely once the worbla cooled down. Then I heated and bent the band into the shape I wanted.

Once cooled, I covered the front and backs with PVA glue to smooth out the surface a little bit, then I painted it. First starting with a layer of black, followed by a metallic silver from Krylon, and finally dry brushing some black back in before finishing with a gloss clear coat.

To fasten them to the legs, I decided to go with an elastic/velcro contraption, which was covered by a silver leather scrap I found at Joann. I would have done this different if I had made it for myself, but since I wasn't sure how tight it would need to be to stay on her leg without cutting off circulation I wanted to make sure it was adjustable. The silver piece is meant to be trimmed and lie flat once the elastic is taught against the skin, to make the transition between the band and elastic more seamless.

This is real good work! Good attention to details.

Thanks, guys! This community gives me the confidence to attempt things I've never done before It was kind of nice to do some commission work, since then I don't have to figure out where to store everything after, haha.

"Doctor Who: The Ultimate Adventure" - the Sixth Doctor's redesigned costume