The book does deal with quite a bit of time, as Paul grows older. I get that it would be better to have secured and filmed them simultaneously, but being overly optimistic this give the actors time to grow and mature a bit, as the actor for Paul looks very young right now.

p51 said:
Well, half of it, anyway.
The fact that there are no firm plans to film the second half, I find it disturbing that hardly anyone seems to know that or among those who do know, they don't even seem to care.
Click to expand...

Totally with you. Got burned a few times before with games and movies where they planned a trilogy, sequel etc and they were never finished due to sales, I was effectively sold an incomplete product.
If this goes down the same way I'll be gutted. Unless it's terrible which I doubt it will be.

Question: are these Guild members? I LOVE the costume on the right... 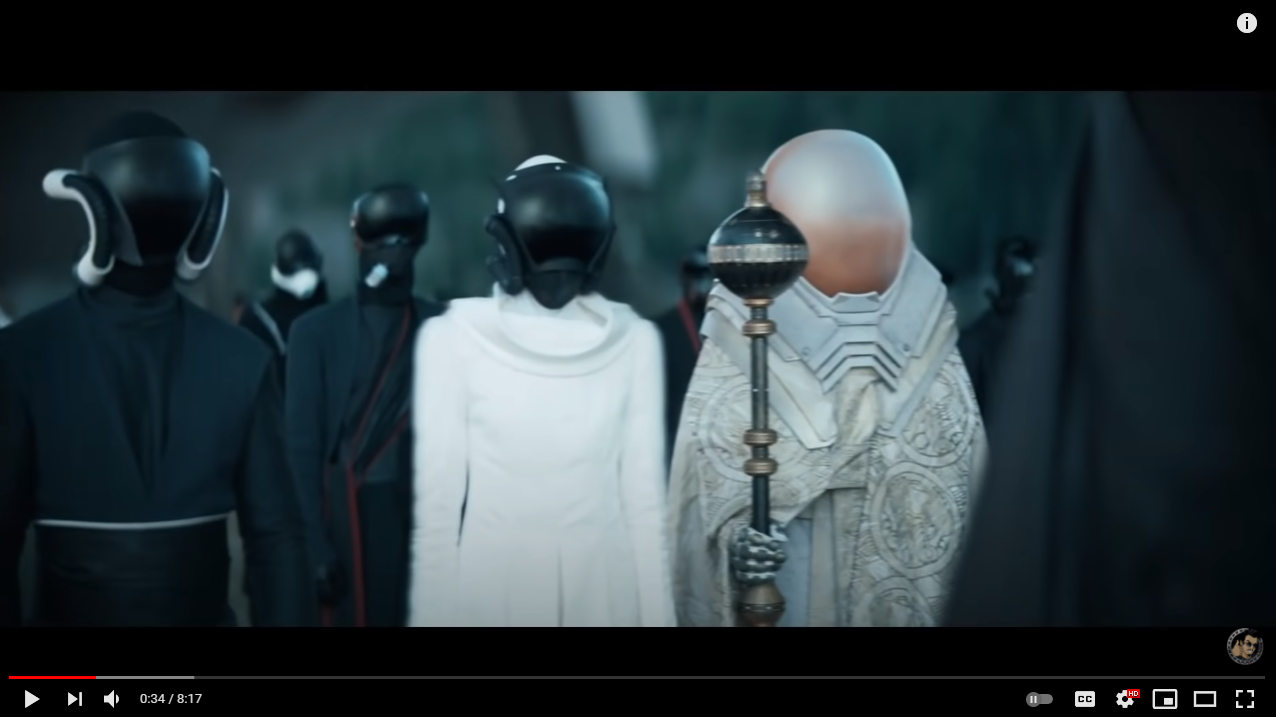 This came out in several European territories last week and managed to catch a screening some days ago.

To sum it up briefly: an overwhelming experience. Visually stunning, bold. Greig Fraser's cinematography is some of the best I've seen in a long time.

People saying it feels like a combination of 2001 and Star Wars aren't far off. Also lovely and surprising to see some Giger influences sprinkled throughout.

There are some issues with pacing and character development, but I'm curious to catch it again and see how it plays on a second viewing. The structure of the movie in some ways feels like a dream.

I watched the Lynch version afterwards to compare and Villeneuve's version actually improved my liking of the former - making it far more relatable for someone not familiar with the book. Villeneuve's version is a vast improvement over Lynch's adaptation, but perhaps that's not too surprising.

If you have the chance, go see it on the big screen.

Should this thread not be appropriately renamed?

Watched it yesterday. Was definitely entertained. I like it. Feared I would be bored, but wasn't. Hope there is an extended cut coming and hoping they'll make part 2. They HAVE TO make part 2. I want more.

RPF PREMIUM MEMBER
Seen it 4 times now. I absolutely love the movie. I will be heartbroken if a part 2 isn't made.

Dune is absolutely one of the most amazing novels and series that I've read. I grew up on it and the Lynch film, which was good, but had it's flaws. There were a lot of incredible moments in it though. I still remember the abject horror I felt as a kid seeing Baron Harkonnen pull out the heart plug for the first time. For me this is one of those I wish I had read the book before seeing the film. Would be great if this is more of a reimagining of the novel as opposed to another remake.

A few friends whose opinions I trust have seen it and couldn't say enough great things about it so I'm more excited about this than most other films on the horizon.

Just noticed that the OST is on Spotify, guess I'll be spending some time on it today. Never been a fan of Zimmer, so curious how it's gonna be.

Well the score is exactly what I was concerned about, the usual wide sounding nondescript Zimmer drone. When did themes go out of fashion? Even Zimmer knew the importance of a good theme with Pirates.
I so wish Frank Klepacki had scored this, he captured the world of Dune even better than Toto for me.

It was a fun movie, but I'm annoyed that they neutered Vladimir Harkonnen, a monster that's barely even still "human".

I really enjoyed Dune. Denis Villeneuve knows how to make movies and is probably my favorite director. There's something missing for me, though, and I think it's simply the possibility that we won't get the second. How did they not film both at once?


sztriki said:
Well the score is exactly what I was concerned about, the usual wide sounding nondescript Zimmer drone. When did themes go out of fashion? Even Zimmer knew the importance of a good theme with Pirates.
I so wish Frank Klepacki had scored this, he captured the world of Dune even better than Toto for me.
Click to expand...

Just curious. At what point in the story does the first movie end ?.

It ends when Paul & Jessica join w the Fremen

Cappy said:
Just curious. At what point in the story does the first movie end ?.
Click to expand...

Halfway through, after Paul and Jessica overpower the Harkonnen guards and escape into the desert.

History of the World Part II

Yesterday at 1:54 AM
Apollo