Raphael Adolini is a fictional character from the Predator series. He is an Italian-born Moroccan-raised Barbary pirate. He was one of the most feared pirates of his day, but because of the mysterious disappearance of him and his whole crew at the height of his career, others like Blackbeard have been remembered with more notoriety. His ship, the “Muerte Negra,” was feared especially because unlike many ships which flew the Jolly Roger, Adolini’s ship flew a red flag, the “jolie rouge,” which signaled to its captives death to all. The phrase “dead men tell no tales,” has been ascribed to Adolini. It was carved above his cabin door, when his ship was found floating vacant, east of the Bermuda Triangle in 1718, The flintlock pistol rumored to have been one of Adolini’s favorite prizes was taken from Ivar the Boneless after Adolini attacked and plundered the ship of the Viking pirate in April 1715.

At the end of Predator 2, Michael Harrigan is given that pistol by the Predators as a prize after he kills one of their own. This is the first reference to his existence. The story of Adolini's demise was later told in the Dark Horse comic book series. 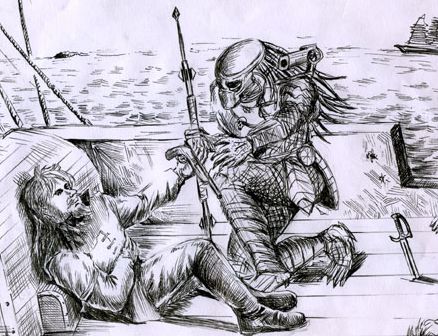