Some work in the back, creative use of greeblies, squaring and fitting, things, lots of sanding and f-bombs... 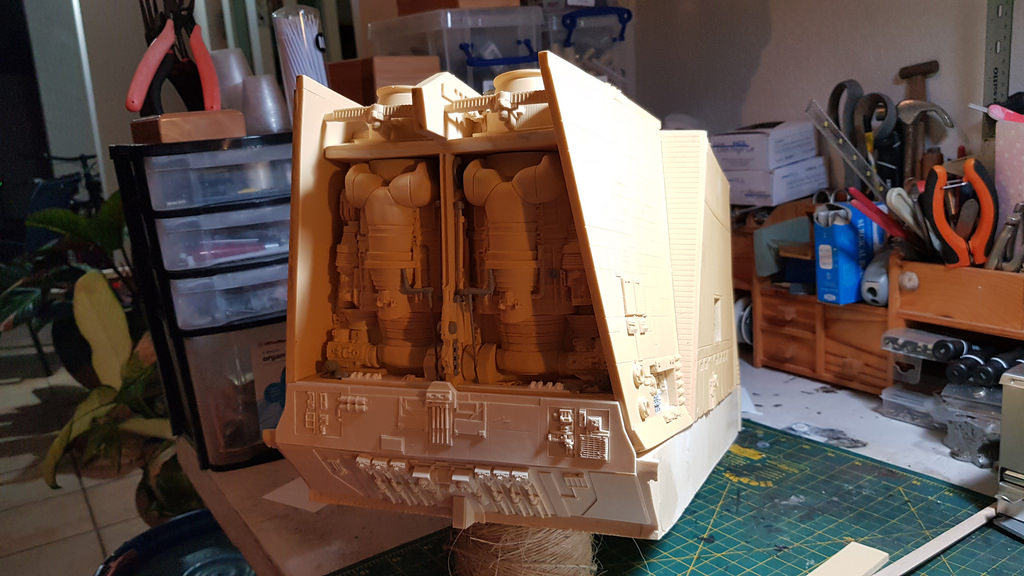 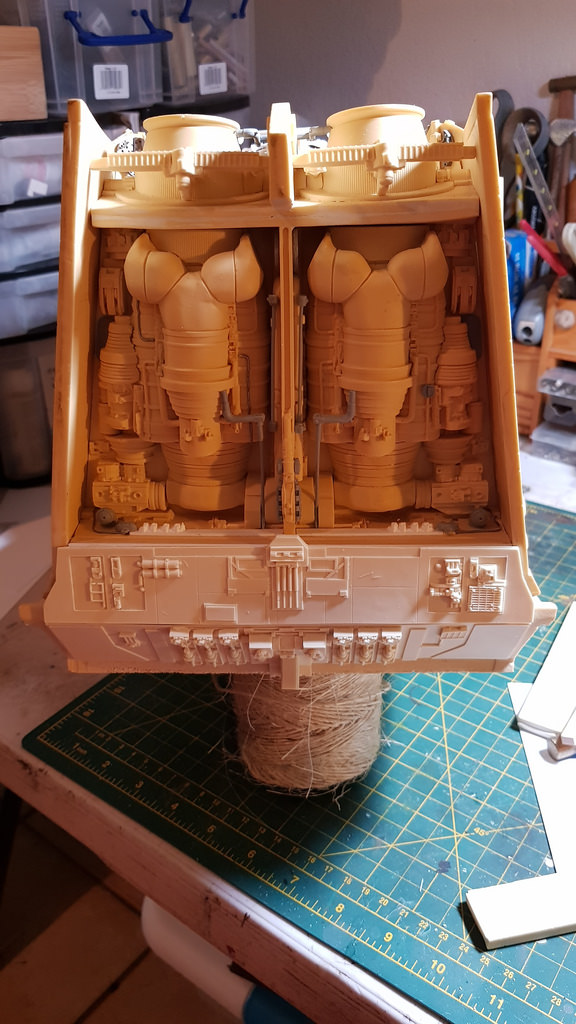 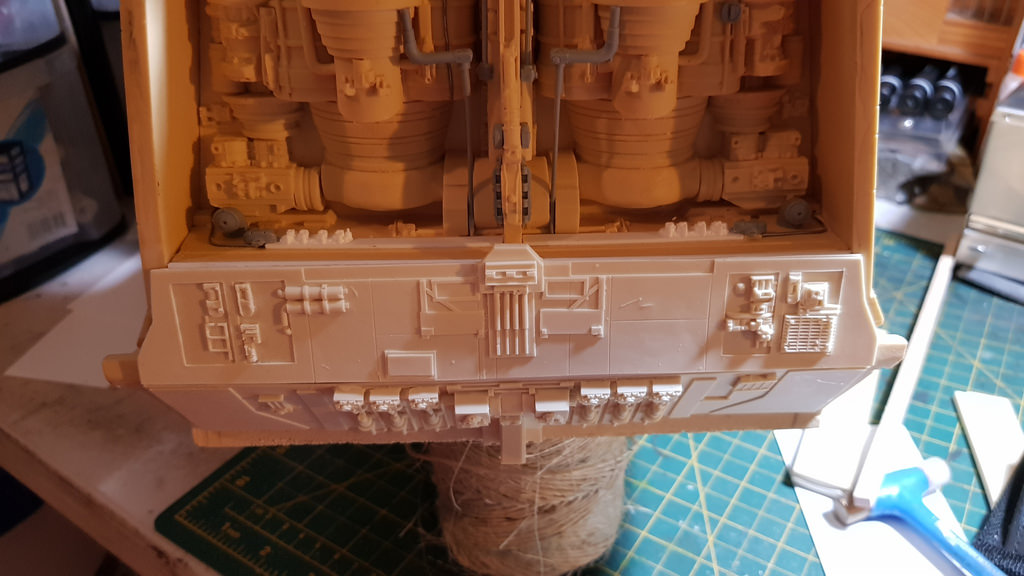 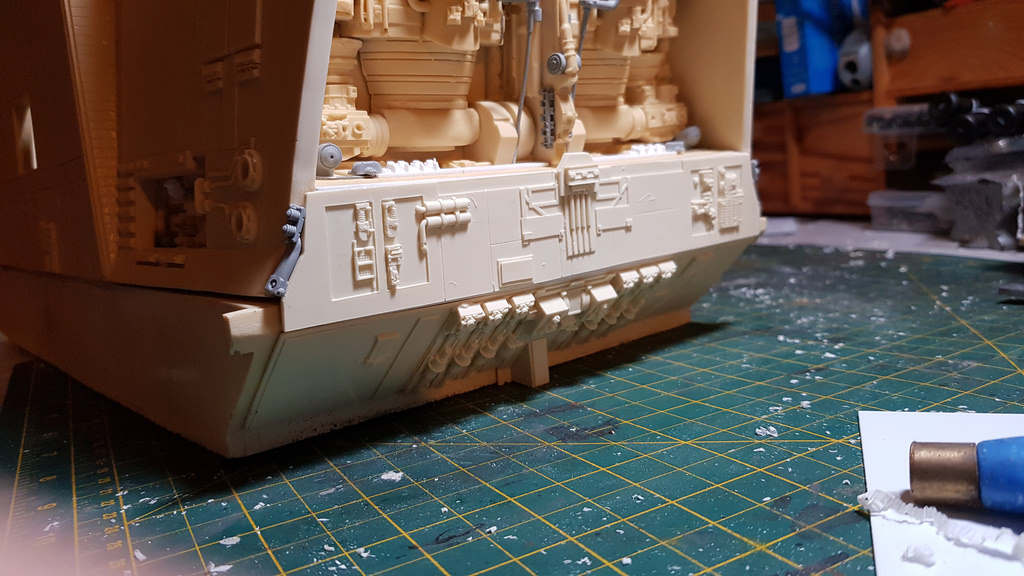 Did those greeblies come with the kit or are you sourcing them yourself?

Some I add, majority came with the kit. The white and gray ones I added.

Fitment needs a little convincing but it seems to be working.... 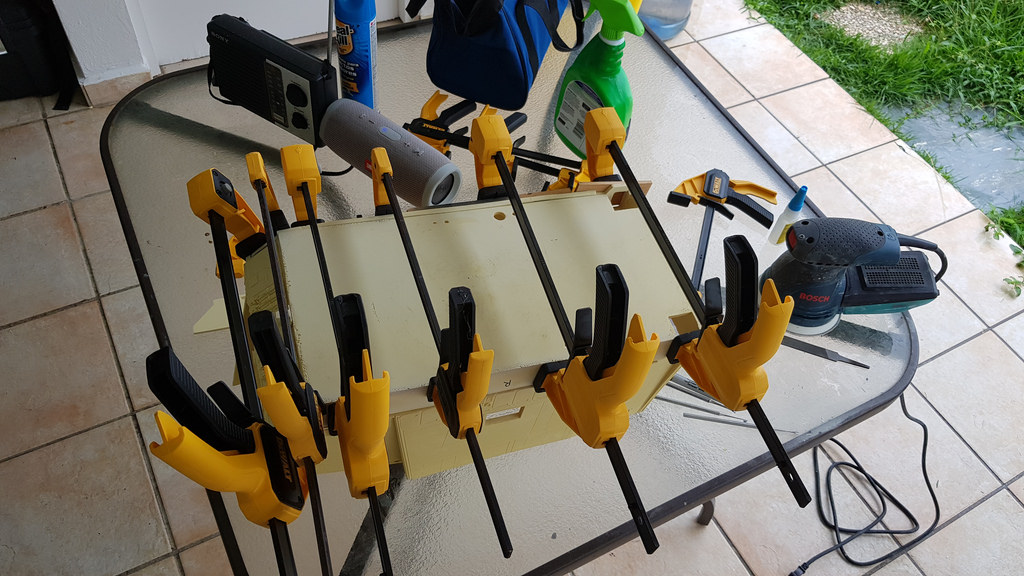 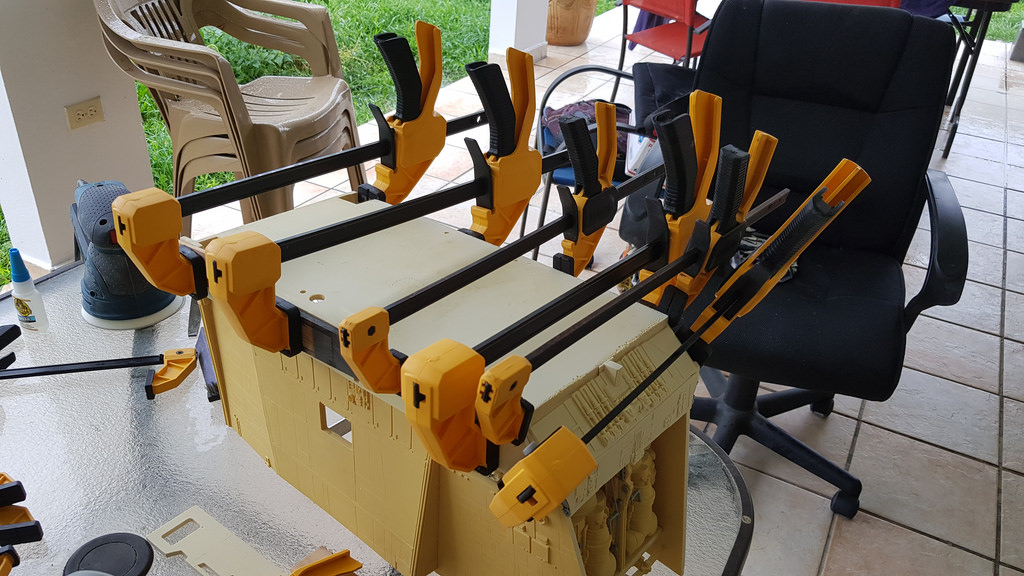 Yes, show that resin who's the master:behave Greeblies look good!

Thanks for the encouragement guys.

Ive reached an important step in the construction of this kit. If i am going to add an interior and full lighting I need to make some important decisions. In order to add a visible interior I would need to open up the front enormous ramp/door on the front of the vehicle. Opening it up is time consuming and doable BUT I am concerned about the long term stability of the model. As you know its made of resin which sags with time specially in hotter environments. I live in the tropics so my preoccupation lies with the integrity of the whole front structure if I open it up. The front was a bit deformed in the lateral areas and needed some heat to get it straight. If the door is opened it may weaken the whole structure and in the long term get all deformed and or twisted. How am I going to approach this needs some thinking and planning. I could continue the build and forget about the interior but it would be another Sandcrawler. Lighting the model is pretty straightforward either way and not worrying to me at this time.

Any experiences with this kit or with resin models in general? What are your thoughts?

No experience with resin models at all my friend , hopefully that’ll change sometime in the future . However , this isn’t an inexpensive kit from what I researched .
Just wanted to say that whatever you decide in the end - opened or closed ramp door...,
I’m sure you’ll still produce a beautiful ,brilliantly finished replica .

I really enjoyed building my RC Sandcrawler. It still a thing of beauty to me some years on.

Building an interior is a decision I wouldn't enter lightly into. You'll probably be able to run the lighting around the interior sides without too much trouble but you'll need to plan it out more carefully.

I access mine through the top to put in batteries but I still have to be carefull. Resin is very "chippable" and the less you mess with the model once its built the better its chances of survival.

I didn't do an interior because I didn't want all the effort of something that rarely scene and not many people have much of an interest in anyway. The LED lighting was enough of a bonus to suggest it, with stairwells , access ports and the cabin. It actually adds to the scale of the model in a darkened room, like the film studio scale .

You may want to consider "pinning" those large side panels and base, otherwise it could be a problem going on in the future and it helps hold everything together. Here is my thread link to show you how to do it : https://www.therpf.com/showthread.php?t=71711 . Nearly ten years on I've had zero problems with the model, but getting those joints to hold without popping open everytime I took off the clamps when I built it was pretty frustrating. The pin and stick solved that immediately.

Great start and work on the model so far, good luck with the rest of it.
Last edited: Oct 1, 2018

I think I will follow your advice and built it without the opening ramp. Its an impressive model as it is. I will add lights though! Thanks for your input.

In the meantime I built this one: 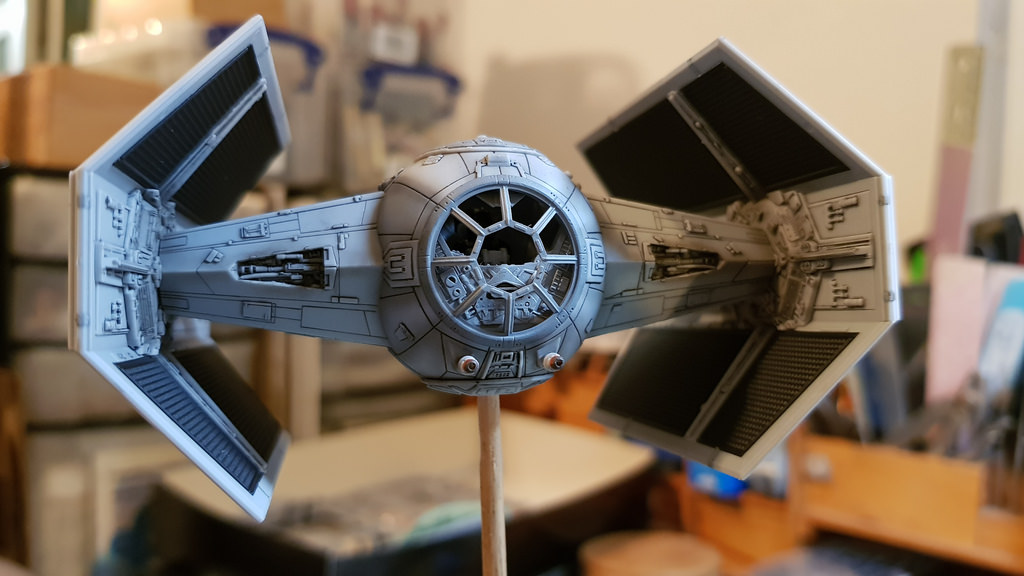 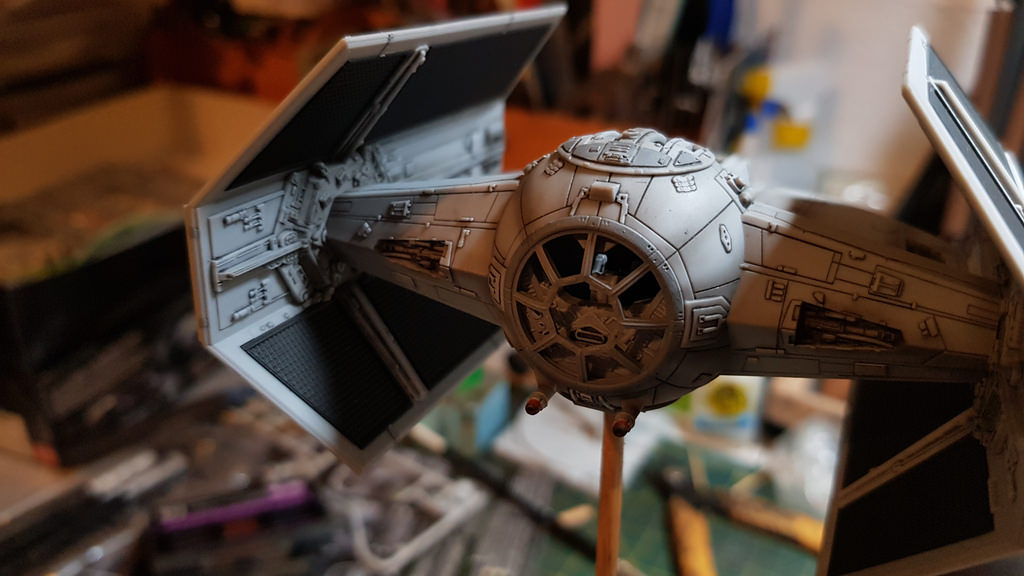 Will photograph it tomorrow probably.... I have another TIE already built and one waiting assembly so I may do a diorama of the trench run. I need more Death Star tiles so if anyone has some for sale let me know!

I love your hard work on this. I think the suggestion of the other member to pin the model is spot on. I haven’t built many resin kits, but most resin builders use a link pin approach that works well. Very nice work on Vader’s tie fighter as well. Keep plugging though it you are doing great!

Dedicated some time today working on the back of the model around the engines. Using styrene strips.sanding and more sanding I tackled the poor finish and fitting of the resin parts. With patience the results are very good. 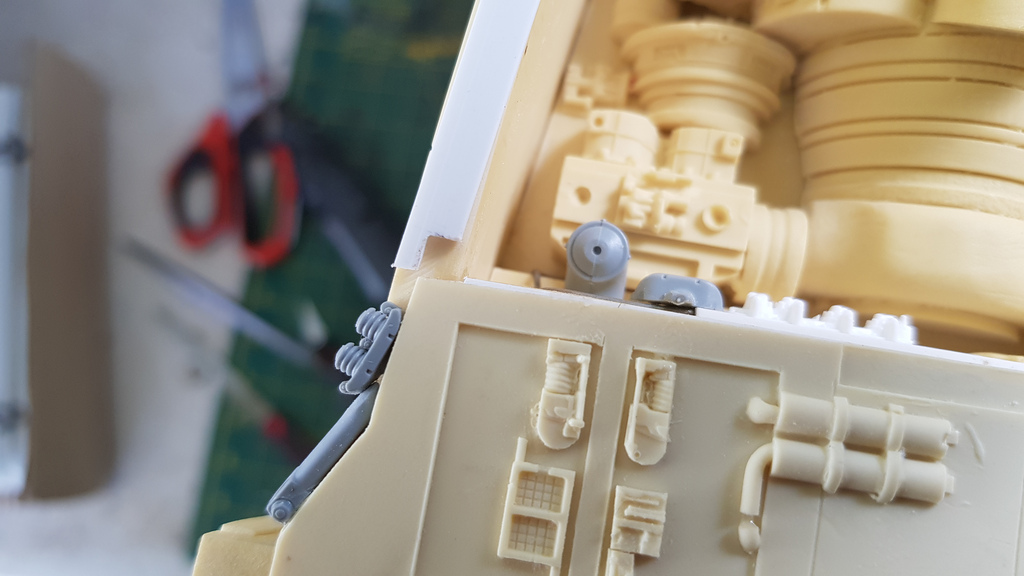 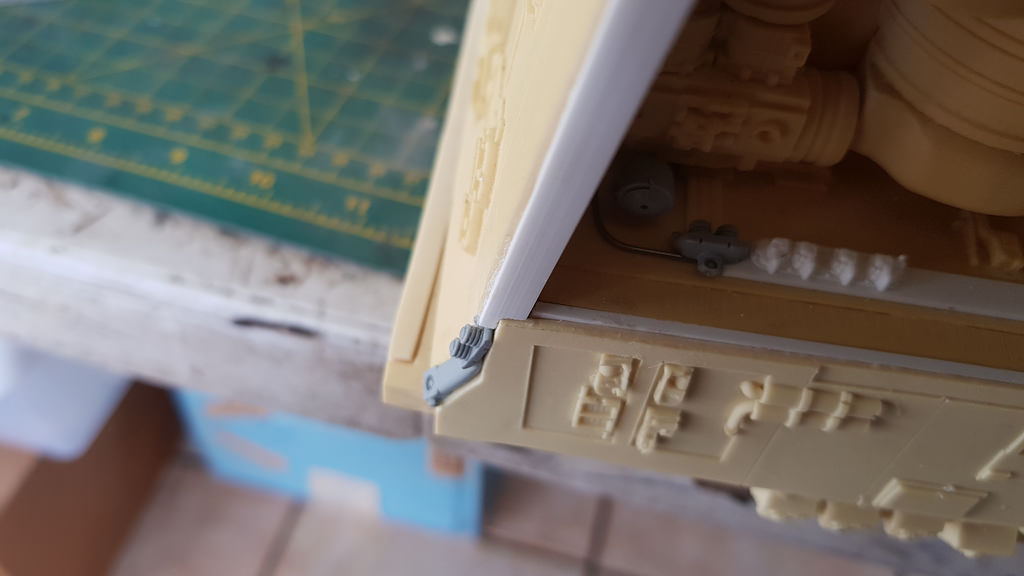 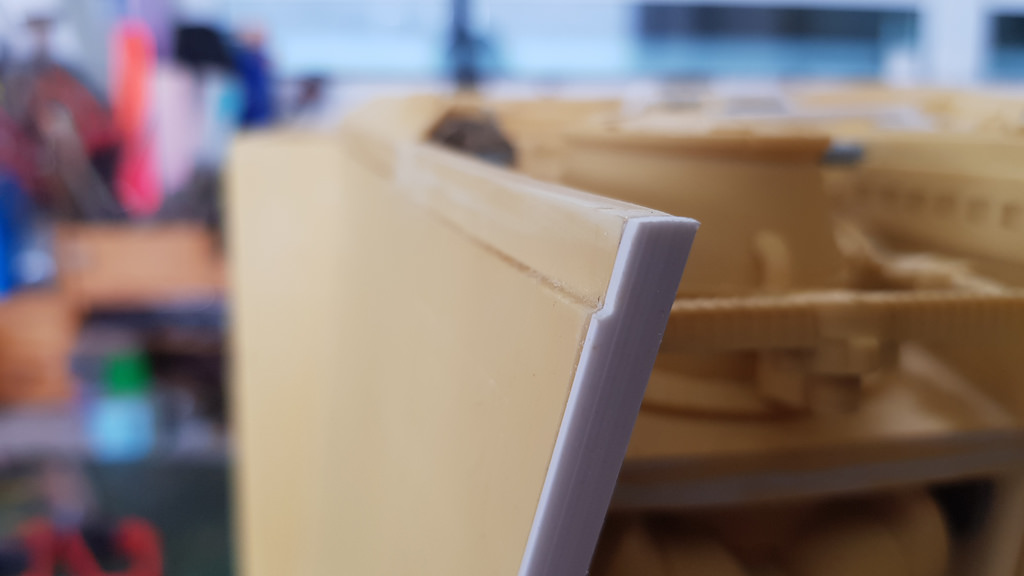 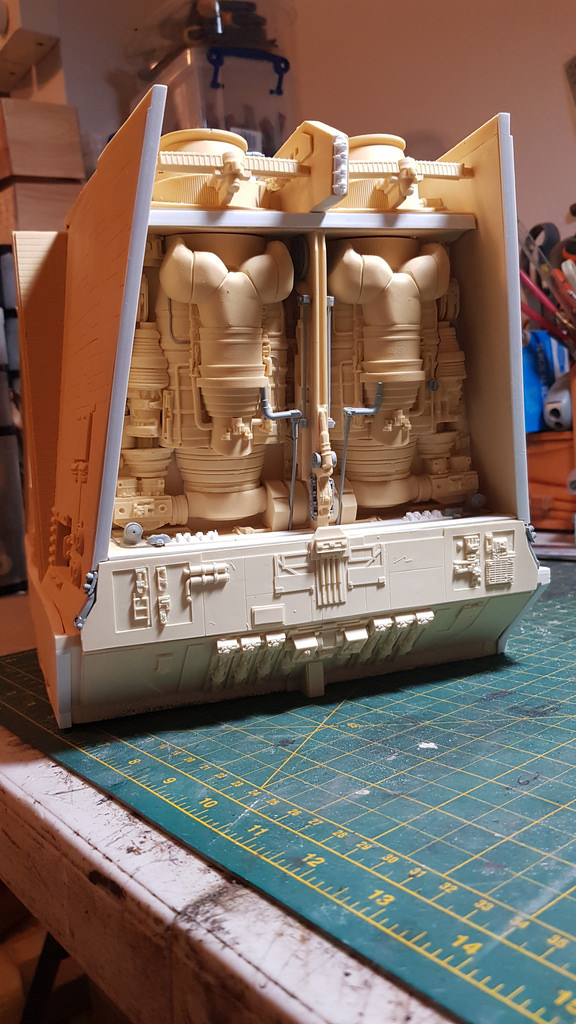 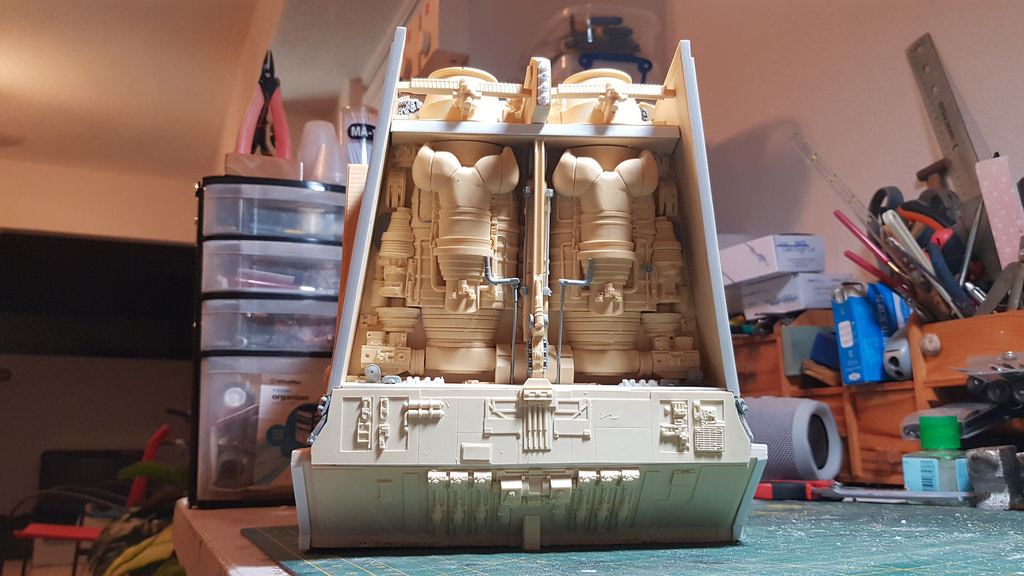 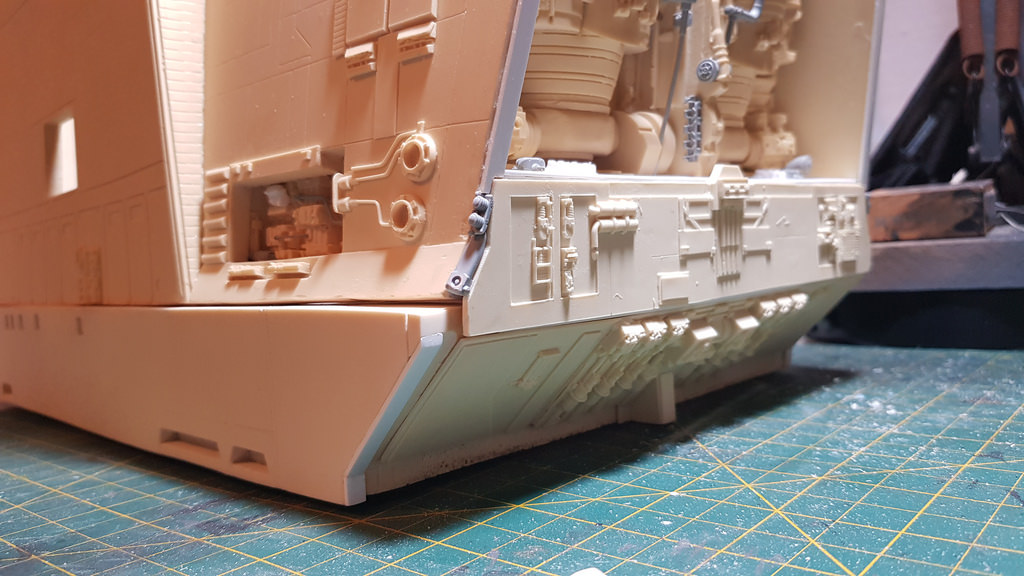 Recently started again with this beast. Decided to tackle the cabin, added my Jawas and some additional greeblies. Plans call for lighting and some fiber optic details here and there.

Front section was finally properly fitted. Lots of sanding and creative solutions were needed. It is strating to look like a proper Sandcrawler

Keep it up Oscar. The few, the proud, the Jawa Sandcrawlers.

Some preliminary beauty shots. More FO will be added to instrument clusters

Keep it up Oscar. The few, the proud, the Jawa Sandcrawlers.
Click to expand...

Thanks for the support!

RPF PREMIUM MEMBER
Looks great!!
I hope you haven't given up on the opening ramp. If you are worried about warping over time, use a piece of acrylic sheet on the inside. If you scratch up both mating surfaces with 220 grit and use super glue, that panel will never warp. I have done this before. Use .093 thickness. That ramp has to be strong enough to handle a few tons of scrap, so a thick panel would make sense.
I think one of the cut-away books shows a crawler interior, no? ( found one )
Can't wait to see more.......

srspicer said:
Looks great!!
I hope you haven't given up on the opening ramp. If you are worried about warping over time, use a piece of acrylic sheet on the inside. If you scratch up both mating surfaces with 220 grit and use super glue, that panel will never warp. I have done this before. Use .093 thickness. That ramp has to be strong enough to handle a few tons of scrap, so a thick panel would make sense.
I think one of the cut-away books shows a crawler interior, no? ( found one )
Can't wait to see more.......
Click to expand...

Sadly I ditched the ramp idea. Its not only the probable warping its also the weight I would add to an already super heavy model. The reinforcing needed to open up the ramp plus whatever details and structure details added would put a lot of weight on the tracks supporting the model which are also resin. I would show the model over an interesting looking diorama base, at least that the plan!

Jawas are ready and eager to go collects scrap around Tatooine

The lights add interest and detail to the cabin area. I also continue work to square up the whole Sandcrawler with special attention to the top section. I will try to make it sit flush with almost no gaps in order to leave it unglued to access the crawler innards in case of any future problems.