Hello everyone. I haven't posted in a very long time as personal situations had me sell pretty much my entire collection of replica props. Now that things have stabilized (well, sort of in a pandemic...) I have been picking up an EM phaser here and there when I can. My very first prop was an EM TOS P2 way back in the 1980s and I've been in love with his work ever since.

My questions are about these two phasers (Link to pictures here...iCloud). The first is from TWoK. It's definitely an EM as I've compared it to the others I have had, but what's really odd about it is that it isn't in the usual metallic steel grey all the others I've own were in, it's in a metallic steel blue. It's sharp as all get out, one of the best casts I've had. The emitter is painted black with the foil sides. There is also a hole in the bottom of the handle, about 1/2" deep, that I've never seen in one before.

The second is a STV/VI Assault Phaser. I'm 99% sure it's an EM cast as it matches up with the ones I've had before, every detail is exactly right. The emitter and vents are metal, the turn knob is missing (anyone got an extra I can buy?), but like the TMP this is painted very differently. It's a semi-gloss black body with high gloss black for the grip, top vents, and the separation piece on the cowl. The paint is almost a rubbery feel to it. It's a very heavy resin too like all of Ed's, not cheap, there is a chip on the vents in the pictures that shows the off white resin.

So thoughts on these two? Are they EMs? Really good knock offs? I'm really happy with them either way as they are very unique. Thanks for any help (and seriously, anyone got a turn knob?).

I did find this article about the screen used Assault Phaser compared to the ones Ed made later, and this Assault Phaser matches spot on to a screen used one in color, tone, everything, even the off painted look, but I doubt I'm that lucky. LOL! 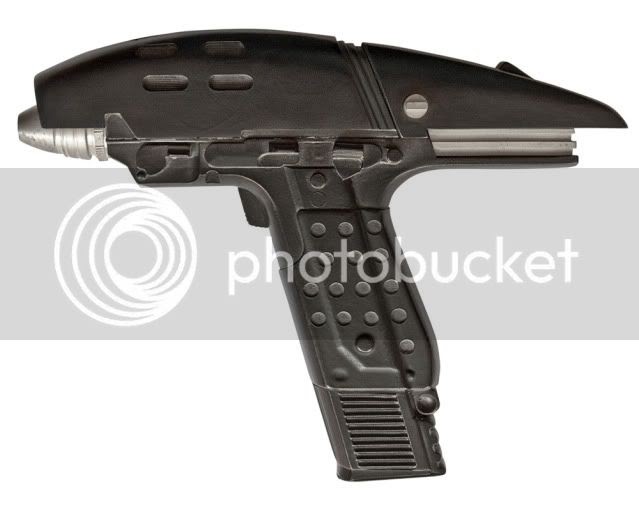 After Star Trek V, the Assault Phaser played an even bigger role in Star Trek VI. For this production, Ed Miarecki was hired by Greg Jein t...

Fantastic Beasts and Where to Find Them 1st Edition prop replica