RPF PREMIUM MEMBER
Just playing around in the shop and whipped this up.

The quartz effect came through much better from the rear. Hopefully the front will be more prominent with a good clear coat.

Make it light up!

how do you achieve the quartz effect? It would be cool to see a idol in Amber like the Sankara Stone 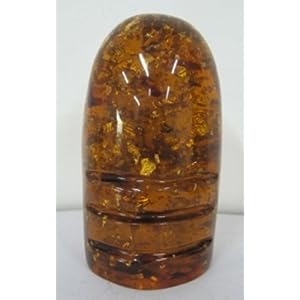 And yes, make it light up!

How is the quartz effect achieved? That is something I always wondered about while looking at all the sankara-stones ...

RPF PREMIUM MEMBER
I always saw it as more closely akin to the whole spooky crystal skull scam that was supposed to have come from the Amazon. And yeah, I gotta build a light box for it to sit on.

It all becomes much more dramatic once it's got a proper clear coat on, as it removes the surface haze and makes the splintering effect pop. For these pics I just wetted it down with some mineral spirits so that the details would temporarily show (it's an old wood worker's trick).

As for the quartz effect itself, it's a special technique I developed when I was building the Tri Wizard Cup for Harry Potter. You have to do about 6 seperate pours of clear resin into sheets and then cut them up.

Sounds pretty simple and straight forward, but it's actually quite tricky to pull off correctly. Even the guys that worked with me side by side on the Tri Wizard couldn't duplicate it.

Personally I'd prefer to see it weathered and worn (grime in the cracks and recesses) rather have it looking like the Sankara stones.

This one is totally unique!

RPF PREMIUM MEMBER
Ideally, I agree that some sublte washes and aging would help to bring out the features. But first is does need the clear coat to complete the quartz illusion and give it the proper depth.

Anyone know how I should start making the mummified hand from tomb raider? Himikos hand?