This is online now as coming to auction: 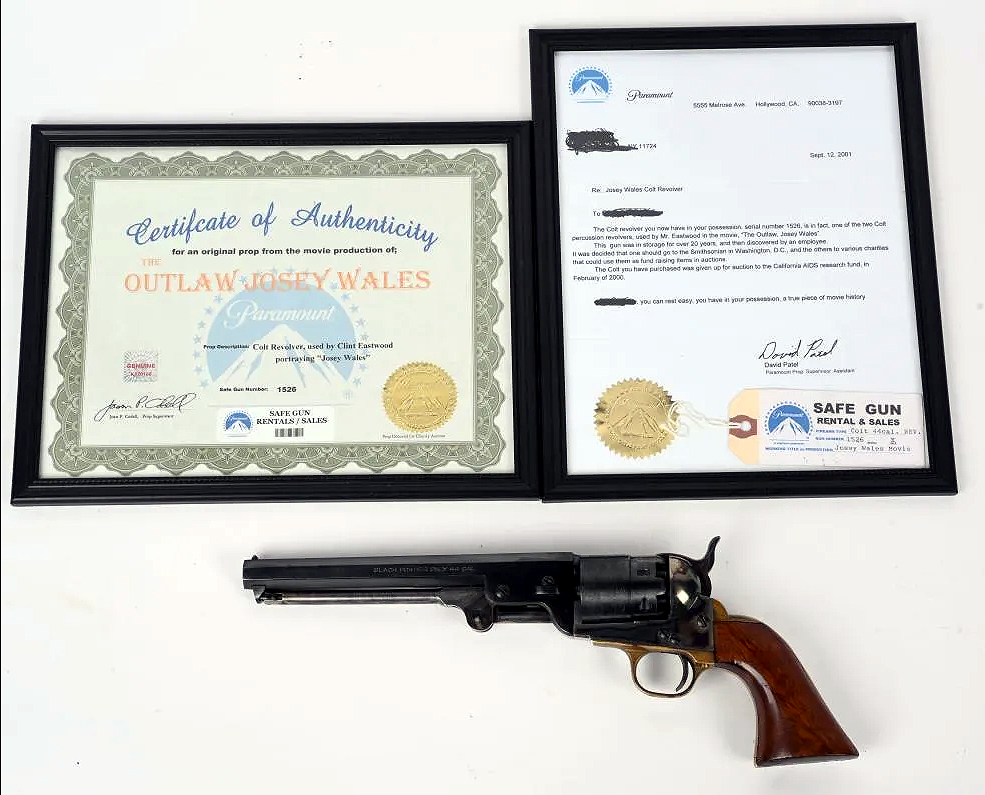 The first thing you might notice is the amazing looking paperwork. Foil seals, Paramount logo, sourced from their own Gun Safe Rental and Sales. Wow.

How convenient it states it it "donated to charity auction", that it is the gun used in the movie, miraculously found in their archives years later, one of two, and the other is in the SMITHSONIAN Museum. Hard to beat that?

Until you realize that the film was not made at PARAMOUNT, but at Warner Brothers, and produced by Eastwood's own MALPASO Company. There is no record of SAFE GUN RENTALS AND SALES in the California online biz, Secretary of State look up database, either current or disbanded. One company under that heading DOES come up twice: STEMBRIDGE GUN RENTALS, then housed on the Paramount lot (but a separate entity) who DID provide the weapons to the production: 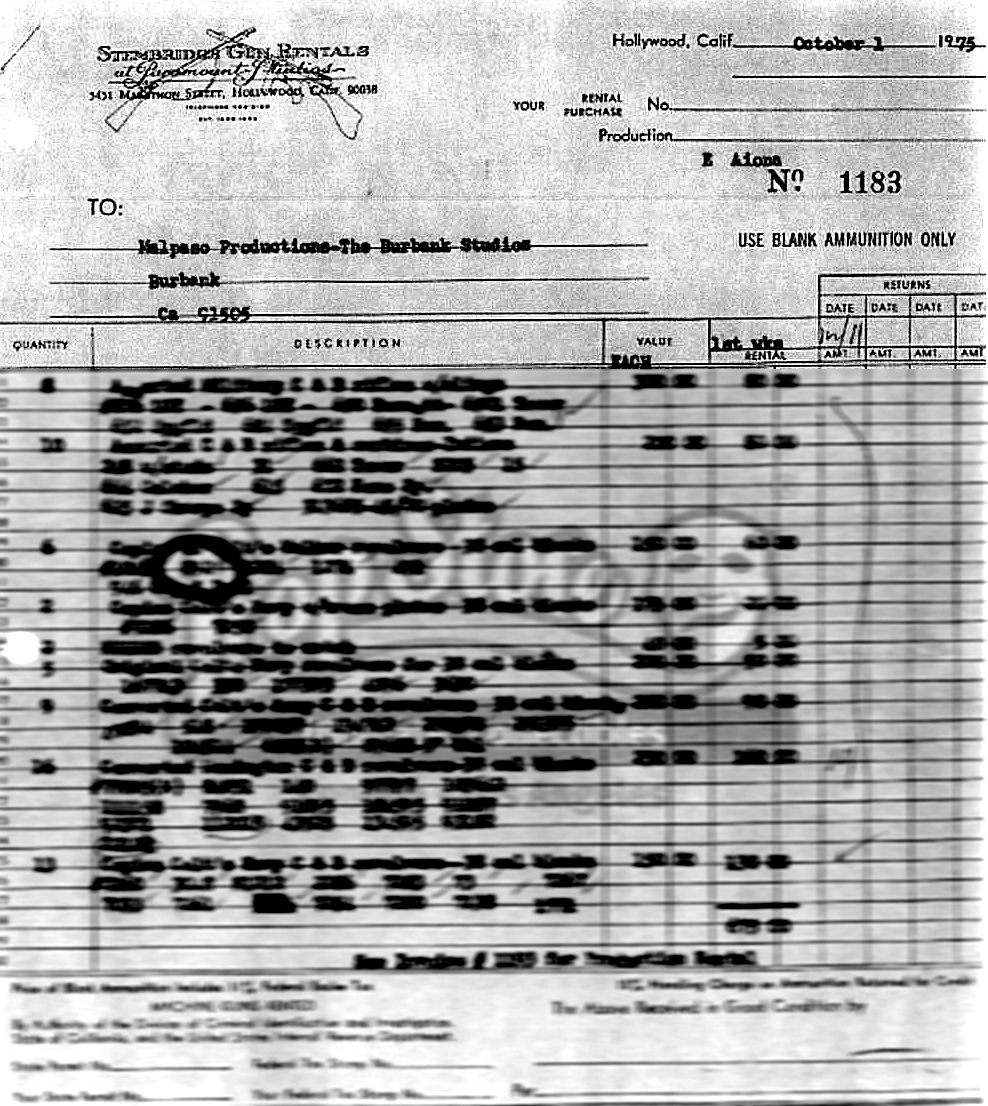 I have shortened it, eliminated the correct color, and blurred the important information as to not educate fraudsters. This is one of two used for the film, #1183, along with #1185. It states six Colt Walker replicas were provided, altered to shoot blanks and records them by serial number. The main hero prop, used by Eastwood, was sold nearly 20 years ago at the HIGH NOON sale, and purchased by our sponsor here, The Prop Store Of London, who kept it until recently. Stains on the frame match perfectly to this weapon. It sold then for $35,000. There are also rubber copies of it made from this example. It was 'saved' by Al Frisch, who worked at Stembridge when they folded in 1998, where he matched rental invoices to the weapons themselves. Another example, was sold to the Petersen Museum, who bought the bulk of the hoard, and resold later, when Robert Petersen died in 2007, at Little John's, as lot 106.

{Other things to notice are the fancy engravings on the revolver (absent on the fake)} (I now retract this part of it, as enlargements do show something on the revolver) and the erroneous use a semi-colon, instead of a colon, on the Paramount COA. And, the use of a "Paramount #" on the gun, instead of using the manufacturer's, which is what Stembridge did. And, the Smithsonian does not list such a gun in their collection.

It, is still ridiculous, that they would accept a studio's paperwork for a prop not produced by that studio. PARAMOUNT cannot attest to a film made at Warner Brothers, of which they had nothing to do with the making.
Last edited: Jun 14, 2022

RPF PREMIUM MEMBER
Great research, Stairstars . I presume you told them but they don't care...

I sent them a short note, with just the basics, and told them the facts were available online.

RPF PREMIUM MEMBER
But they got a gold foil sticker!

Last time I spoke to Al Frisch he still had a couple of the Josey Wales pieces in his collection. If you need to reach out to him let me know. 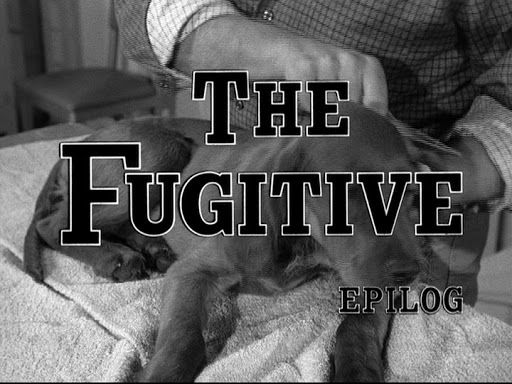 Well, no surprise it sold, in spite of being a dog. It opened at $13,500 "competing bid" in a millisecond, only to go to an online bidder for $14,500 plus the usual insulting fees.

A fool and their money...

RPF PREMIUM MEMBER
That gun isn’t even a colt walker (his main guns) nor a colt army, as carried in his belt. His belt gun was a colt army. The auction gun pictured is a colt navy.
The ‘poster‘ walkers are still cap and ball. The move walkers use conversion cylinders to fire cartridge blanks.

Yes. The production rented both Army and Navy Colts, original and conversions, as well as rubber copies.

I have obscured the serial numbers for obvious reasons: 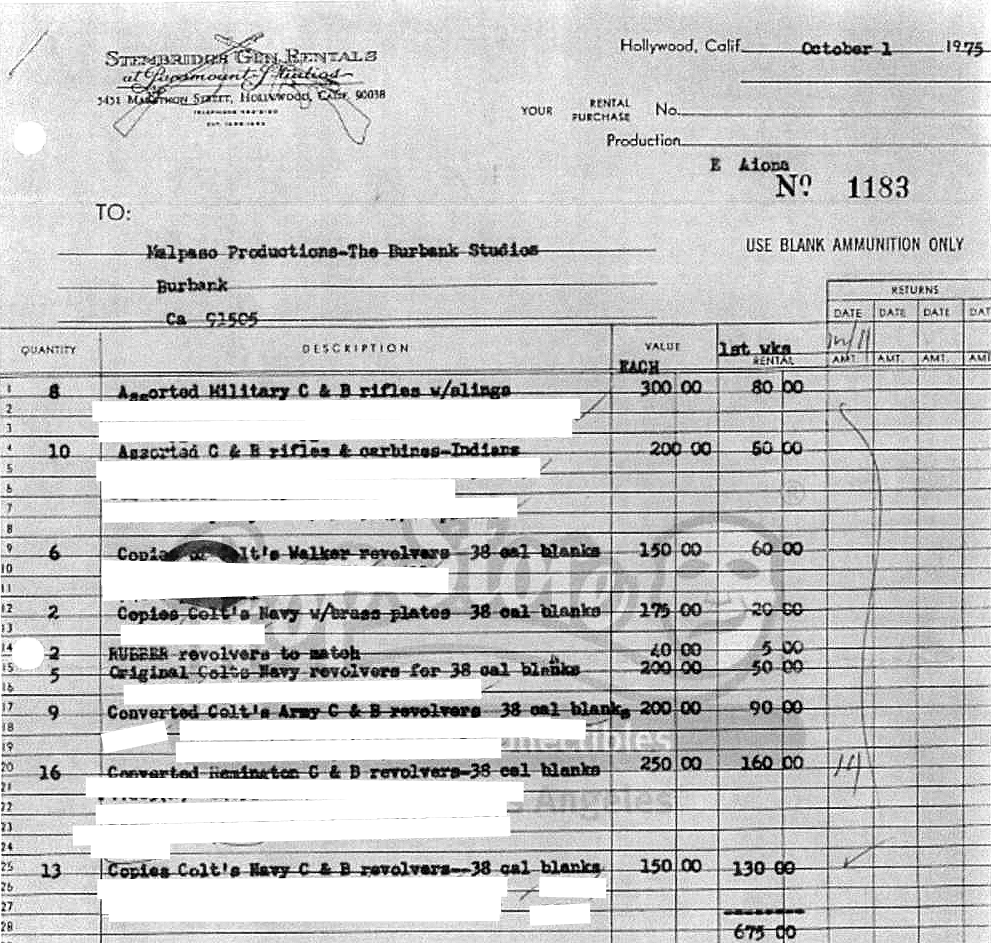 RPF PREMIUM MEMBER
Yes, but probably not ‘used by Eastwood’, assuming the bs provenance was accurate. Now, ‘used in the production of’ could fly.

Nothing about that gun matches, as it is not Stembridge marked, the right make, it's deep gouged number is not on the rental receipt and is from a fake gun service owned by a studio that had nothing to do with the film.

For those unaware, the Burbank Studios, shown on the receipt, was the name Warner Brothers took during a short lived sharing of the lot when Columbia moved from it's historic Gower street origin before they bought the MGM lot in Culver City.
Last edited: Jun 19, 2022
S

As I understand it one of the Walkers in the movie was the True Grit 69 Walker then a second and maybe some spares where made all in 38 to shoot blanks . If you go 44 it cuts in to the locking notches . They or it got re-used in The Long Riders , lonesome Dove and even 3 Amigos .
S

You are correct, as far as TRUE GRIT. That pistol is recorded by serial number on the form, and was sold at the 2007 LITTLE JOHNS sale. I cannot vouch for that accuracy, since I do not have the TRUE GRIT paperwork, but that was what they claimed.
Last edited: Jun 19, 2022
S

Stairstars said:
You are correct, as far as TRUE GRIT. That pistol is recorded by serial number on the form, and was sold at the 2007 LITTLE JOHNS sale. I cannot vouch for that accuracy, since I do not have the TRUE GRIT paperwork, but that what they claimed.
Click to expand...

Yeah , Stembridge had a few Walkers worked over for Blanks . Also a Dragoon used in The Cowboys and the Sam Elliott version of the quick and the dead . I guess if you rent then it's just income !
S

Or should I say repop Walkers .. The most obscure re-used gun I've seen is the Winchester rifle at the beginning of Calamity Jane the 50s musical , that's the gun John Wayne has in Hondo . It has a unique shape big loop lever he only used in that movie , not like his other big levers .
S

Loads of interesting re-use guns in movies . In The Scalphunters Lancaster used a cartridge converted Colt revolving rifle , the same one Bull has in El Dorado and Marie Gomez used in Barquero .

What a great looking weapon...and such a bad design!
S

Yeah , great for blowing a hole in your thumb though ! That side gas is a lulu !

Global Effects is cleaning out it's attic.
2 3