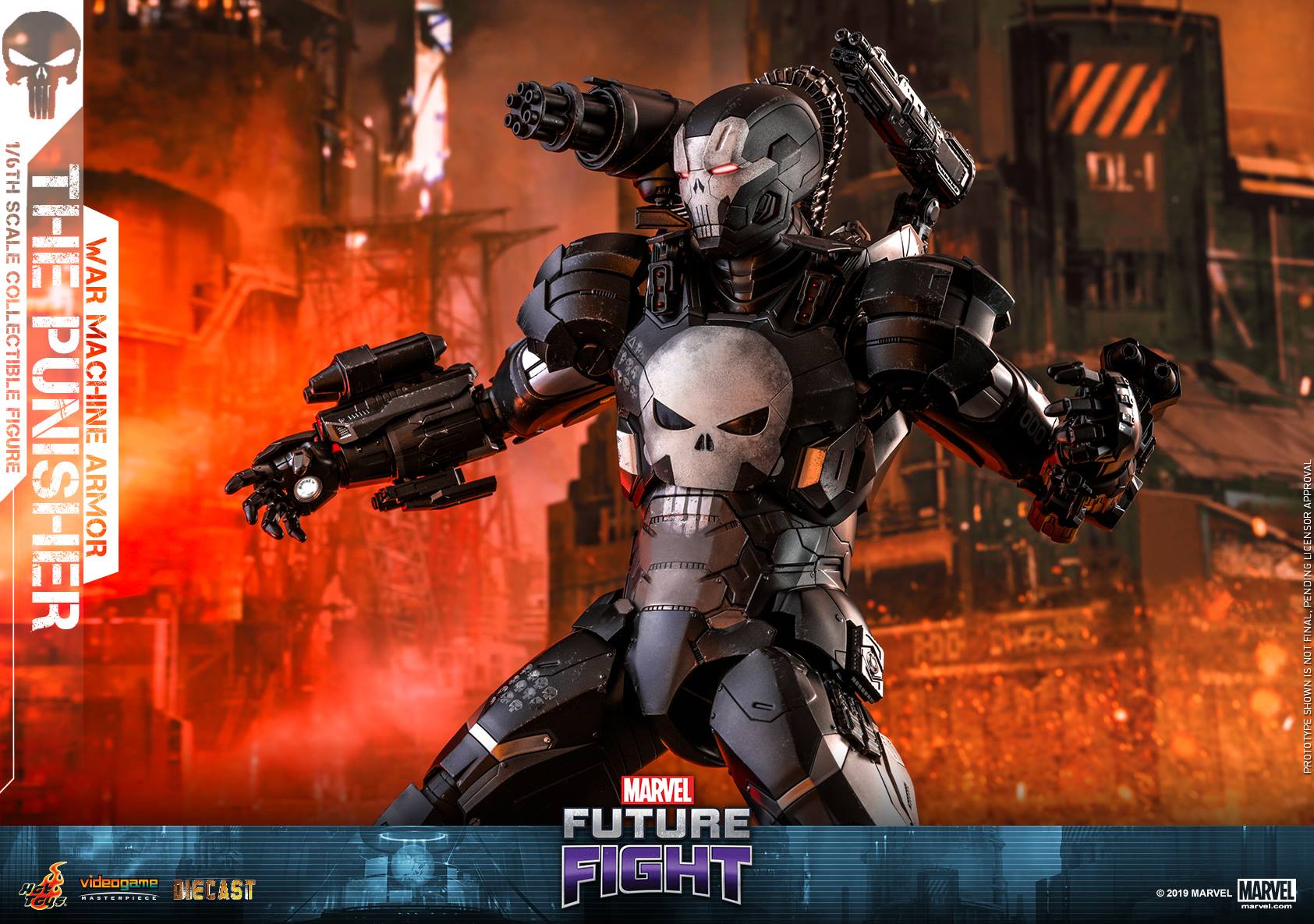 Hey guys, I'm very new to cosplay. Never touched a chunk of EVA foam in my life. So I thought the best cosplay to ease me into the hobby was a super complex suit of armour made out of foam. I am a smart person who makes good decisions XD.

It's not too bad though. Someone else already did a similar build. Using the same pattern I'm using no less from MaxCrft. Most likely, mine won't be nearly as professionally done as that amazing build. But I'm very lucky to have a much more experienced cosplayer, My partner Black Dhallia who is guiding me through the build and my constant anxiety over it.

So, to begin with, I started with the helmet. Using Pepukura Designer I printed off the PDO files for the helmet onto 4 sheets of A4 paper. And then began to cut them out. 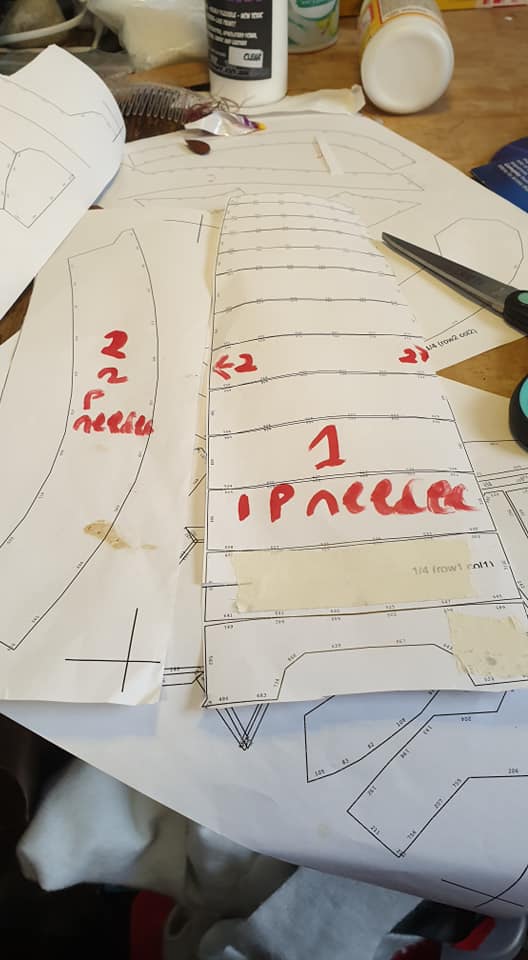 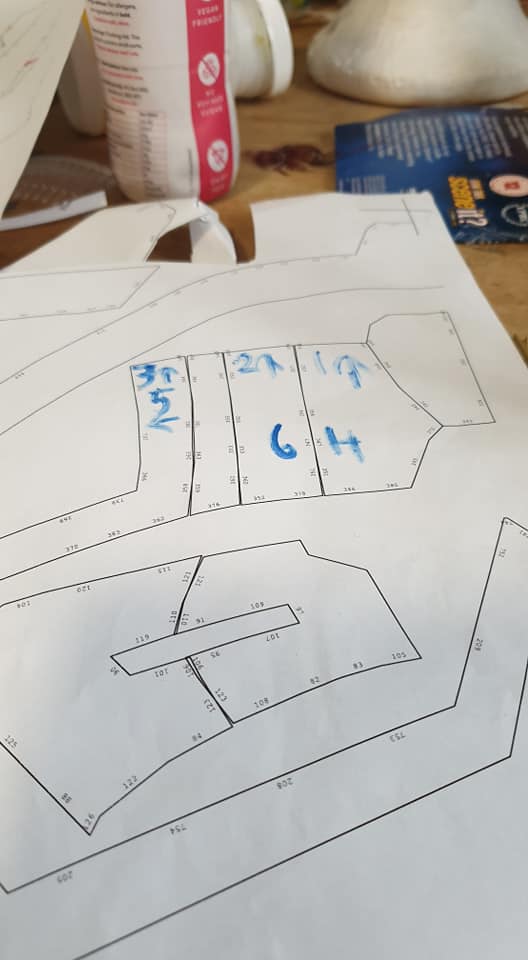 I labelled the templates with numbers denoting the order I will assemble the pieces, along with where the pieces fit together. And a letter denoting which part of the costume the helmet is a part of. So the helmet pieces are labelled 1 H through to 11 H. With arrows pointing to which part each part is attached to. Minus the faceplate. Which I will assemble separately due to wanting a mechanical hinge for that part. When it comes to final assembly this labeling will hopefully mean less confusion for myself. (We will see)

Then began the cutting. 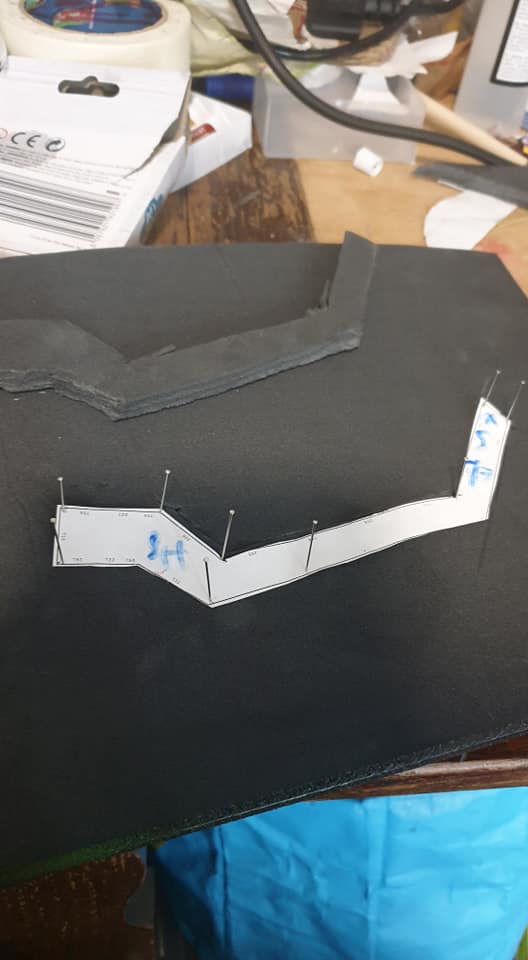 I have a neurological disorder known as Dyspraxia. I'll spare you the sob story but it means my hand eye co-ordination is terrible and I have trouble drawing in straight lines. Let alone cutting a straight line. One of my big fears for this build is due to my lack of co-ordination, the pieces won't end up symetrical or even worse, be so mis-aligned that they do not fit together at all. 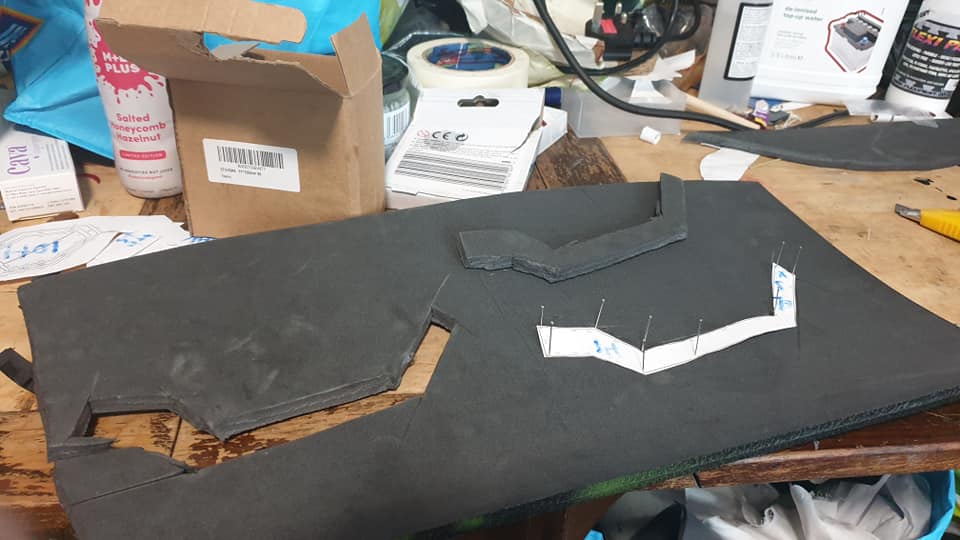 The cuts were pretty rough at first, but as I got into a rhythm and let my anxiety drain away the cuts became smoother. This is before I sand everything down to fit of course. 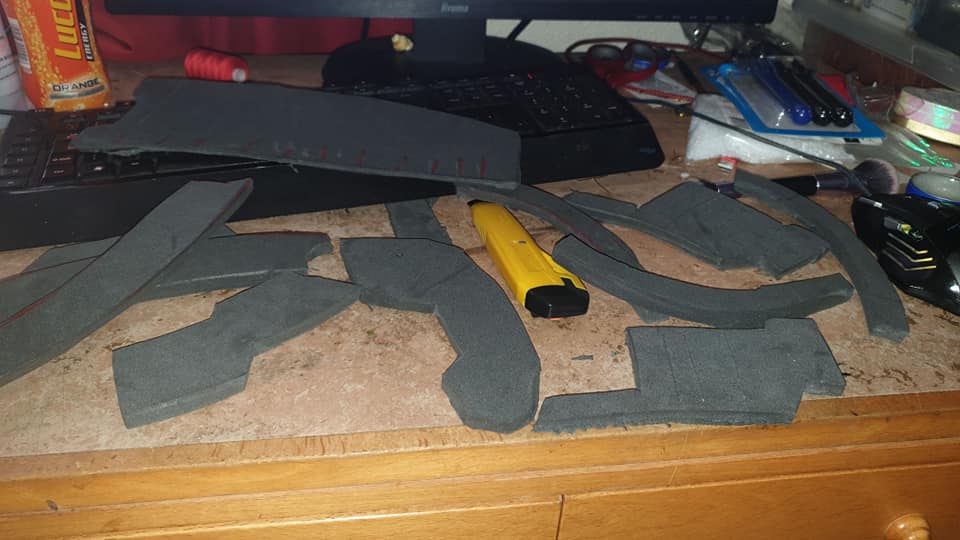 So over the course of three days, on and off. I cut out a whole bunch of foam shapes that will apparently fit together into a helmet. I scored certain parts that needed a smooth bend as shown on the templates. Often, I had to flip something and cut it again for symmetry. But at the end of the day, I have something my untrained eyes think is satisfactory. I will be posting more about my struggles with building this as I go on. This is going to be an adventure. A messy, failure prone, anxious adventure.
Last edited: Oct 26, 2019

So I finished my helmet. It didn't go completely as planned. I was a bit overzealous with my scapple and made one of the eyes too big. That's okay though, I am assured Foam Clay can sort it out. Other than that, for a first timer I'm quite happy with the build. It looks like War Machine for sure.

I started out Heat treating each part and then glueing with contact cement but my other housemates had an allergic reaction to the strong odor. I'd have to glue my helmet outdoors with limited sunlight in the winter. So decided to go with a Glue Gun instead. It meant I was able to finish the whole helmet in a day without awkward light conditions. It's very solid but needs some sanding and evening out. But the fact it turned out well enough has inspired me to get on with the rest of the build. I'll be doing the neck next. Which is fairly simple and shouldn't take me that long. Also, at some point I will properly join together the helmet and the Faceplate with a hinge and a non electronic pully system to open and close the Faceplate. 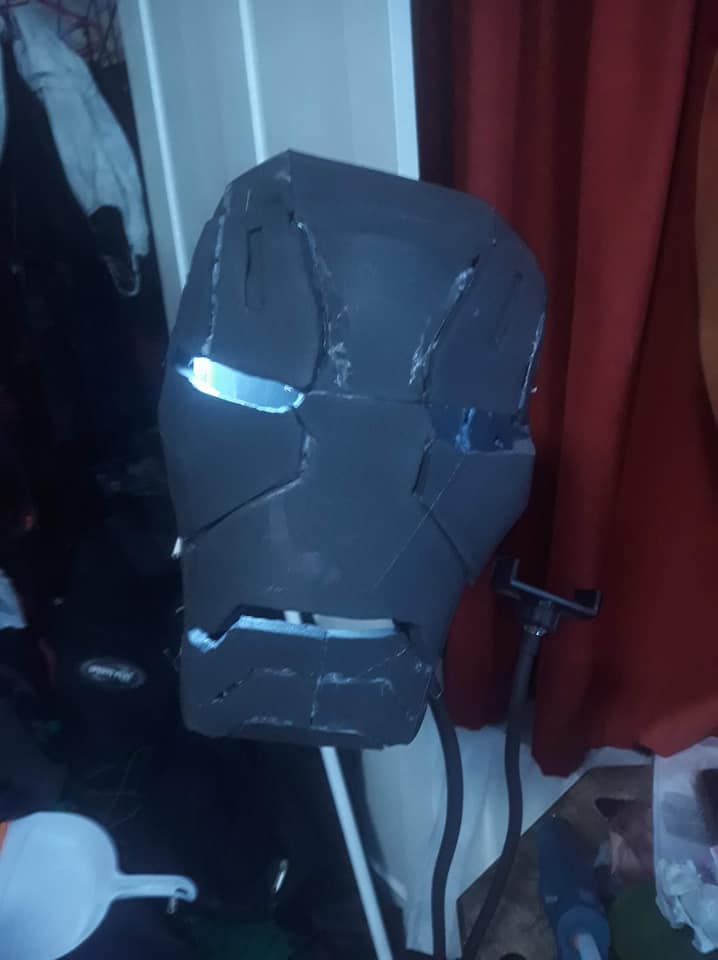 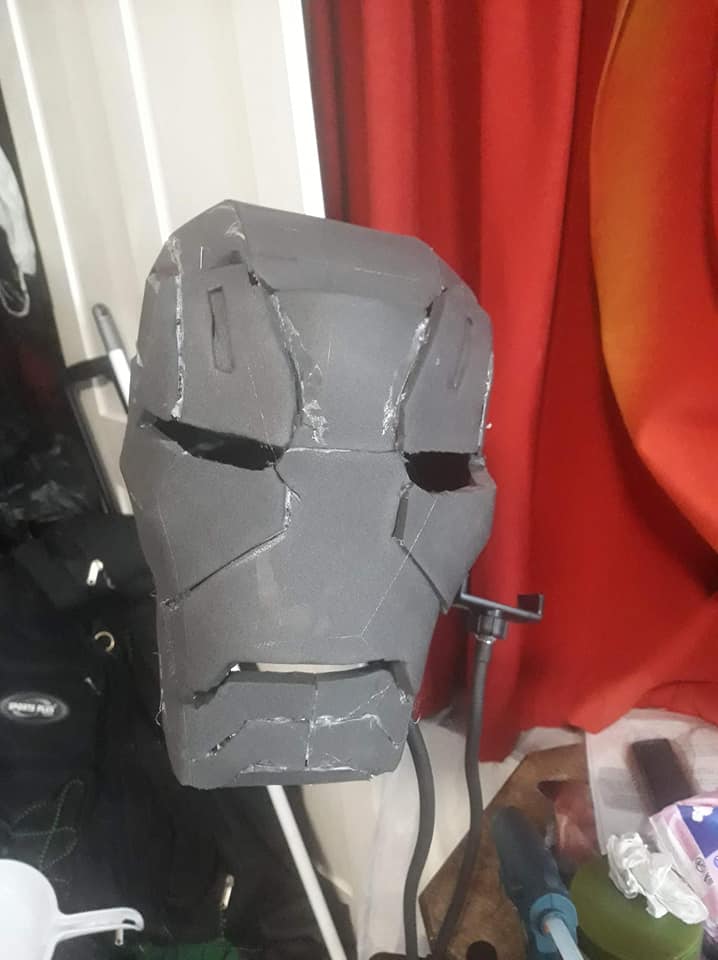 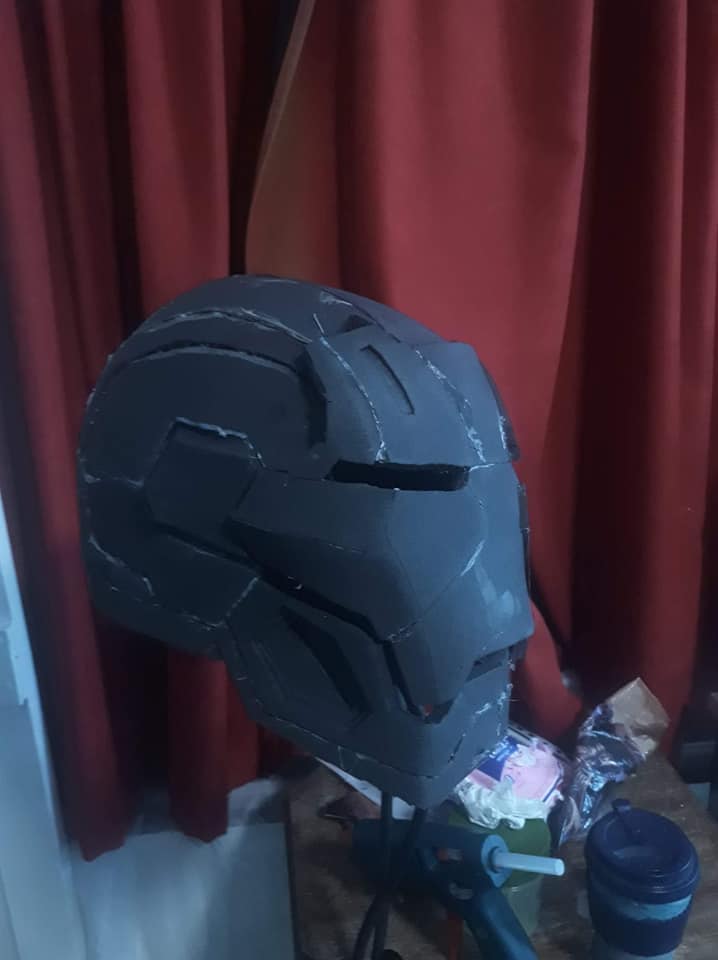 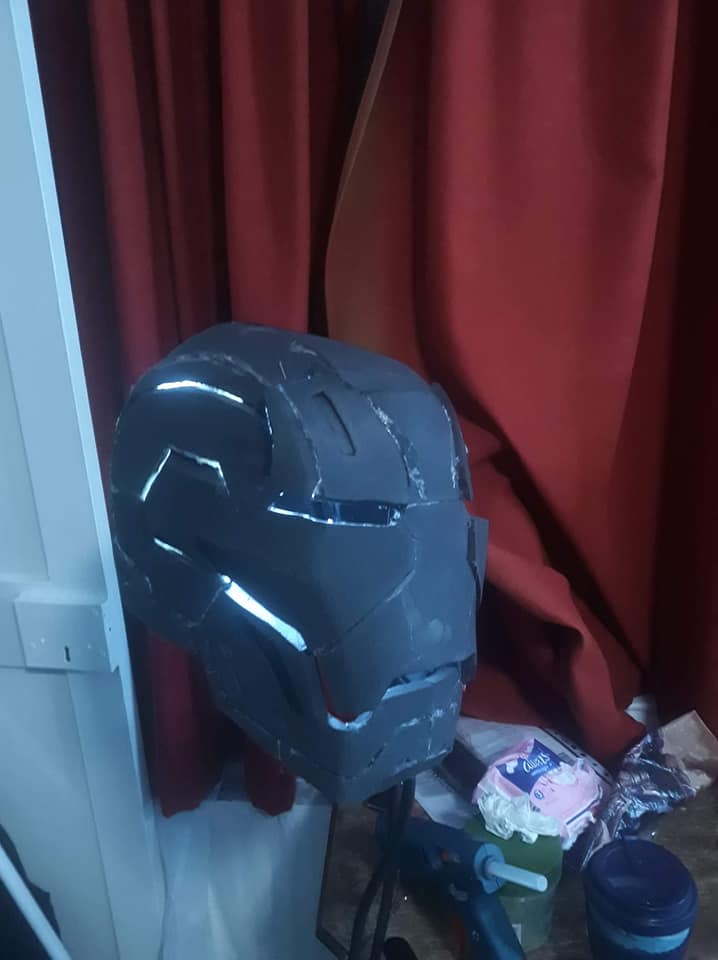 Keep going, this is not an easy project. Good on you for keeping it organized and focused. It's a lot of pieces.