I don't ordinarily post items of this nature, but PIH have really dissapointed me with this current auction:

Any JAWS fan worth their sea-salt can tell you, this is an unused production maquette from JAWS: THE REVENGE.

Scenes were shot with this when the shark chased Mike, but the Director felt that the shark did not match the full-size prop well enough and the scenes were cut and re-filmed.

I've already informed PIH of this fact, but they haven't changed their auction description, despite an enquiring response from them in which I provided direct evidence:

Yeah, I don't know if I'd ever buy anything from these people without some solid, solid proof.

A while back they sold a Captain Jack Sparrow frockcoat that was so NOT SU, wasn't even SA--and as you said, any "fan worth their sea-salt" could tell you it wasn't a real deal coat (actually they said it was a "stunt work" coat and that it "exhibits reverse button hole detailing from the hero coat"--what a bunch of bull! But it had a little tag sewn in it that had written on it "Jack #5".....Yeah, that's proof right there! 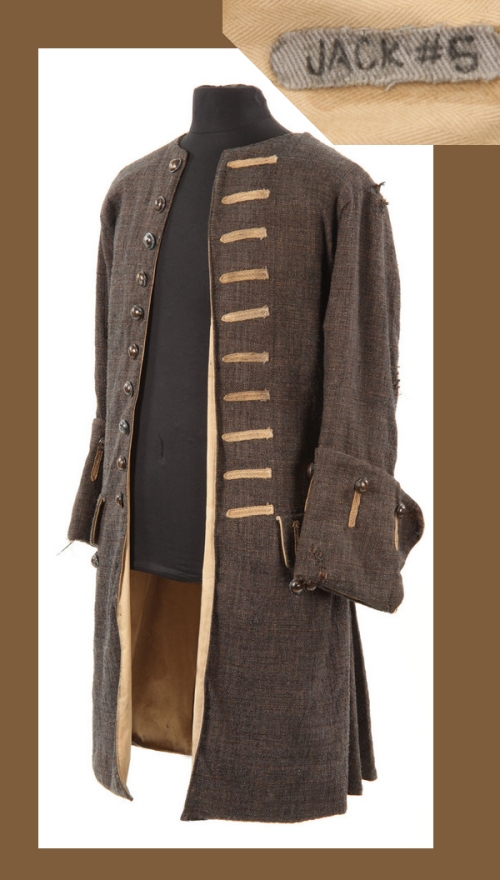 They seem to just take the word of the consignor/seller and whatever proof they provided, and don't even care if you call them on it.

This is like the third time I hear about these yahoo's at that company that is trying to pass something off that isn't true without doing research.
First incident that comes to mind with PIH was a rifle from Star Trek DS9 which was later pulled, then the Rocky gloves which was pulled because of a potential lawsuit from Stallone and now Jaws on a prop that was never in the final cut of the film.

Yup, it's a great gig for profiteers.

Come to think of it, I've a couple of pairs of y-fronts worn by Sir Alec Guniness during the production of 'Star Wars;. You can tell because they have Alec "Obiwan" Guiness written in modern sharpie on the tag. Looking for $2k a piece.
Last edited: Dec 16, 2011
X

"Buyer beware" is true of every seller or auctioneer, not just or especially PiH. They get higher profile consignments so they have higher profile potential frauds or honest mistakes to deal with, but I can't think of a major seller which hasn't had complaints like this. Even Propstore of London has been fooled; I personally pointed out a just plain obvious mistaken or fraudulent consignment which Propstore took for an alleged Donovan uniform from the V miniseries, which had entirely the wrong vest. Not even close. Anyone could tell the difference and I sent them links to photos with explanations proving that it could not be Donovan's, but it still took them about a week to pull the ~$5000 listing even though it was so obviously wrong to anyone who would look at the pictures.

And when Propstore did pull the listing it happened quietly with probably no one noticing, because since they don't have a paper catalogue there's no public record of their mistakes. PiH's mistakes are obvious because of the permanent record of their listings, but I'd be willing to bet every other high profile seller (with maybe one exception) has a similar rate of mistakes or frauds, it's just not usually as visible. PiH deal with literally thousands of items per auction, so this isn't surprising and doesn't represent a high rate of bad items slipping through their due diligence.

Now, in the case of this shark model I can understand the annoyance; it's as obviously mistaken as the "Donovan" uniform listing I reported to Propstore. So, how long ago was the Jaws 2 listing mistake pointed out to PiH? We also don't know who consigned this and what their response to PiH was; PiH sometimes gets items direct from studios or propmakers, and it's entirely possible this comes direct from a production source who's telling them the reason this "Jaws 2" shark looks like the Jaws 3 shark in your pictures is that they come from the same molds. I'm not saying there's any chance that could be true mind you (and I'm guessing it can't be), I'm just saying for all we know it's your word against a production source which is explaining away the similarity, in which case PiH could legitimately decide against pulling the item unless more evidence is presented to them. Then again, they might pull the item from the auction tomorrow, which I would agree would be the prudent choice unless they know something we don't.

That is true and well put.

In this instance, the 'buyer beware' refers specifically to this JAWS item, not PIH as a whole. I've amended the thread title to reflect that.

There has been way more than 3! :lol

PIH is legendary for some of there questionable items.

That being said they have sold a lot of items that are what they have been described.

As with any screen-used item you, the buyer, has to do a LOT of research

VaderArmor said:
This is like the third time I hear about these yahoo's at that company that is trying to pass something off that isn't true without doing research.
Click to expand...

Of course everyone makes mistakes. Of course it is incumbent upon any buyer to always beware. But the foul comes when a company does not give due diligence when an item's history is called into question, especially in cases when the truth can easily be discerned by those not even informed simply by looking at a screencap of the real thing.

A company should know their business well enough that the dupes happen only on very rare occasions, they should care enough to investigate fully when the authenticity of something they are selling is questioned, but sadly, too many companies out there the money is more important than the customer.

RPF PREMIUM MEMBER
If you watch their TV show, it appears they look at screen grabs to try and find the exact scene the prop may have appeared in. They removed an Indiana Jones shirt when they could not confirm it was actually screen used. How much weight does anygive a prop accompanied with "COA". A friend who collects sports game used jerseys, says that most COA are worthless unless you it comes from the acutal team.

RPF PREMIUM MEMBER
My favorite, "COAs", come off the backlot late at night, but those leave you no doubt about the item being legit, and can eventually get you in trouble.

I know they have sold some very questionable Munsters stuff before, for a fact.

RPF PREMIUM MEMBER
This thread is a prime example of why, in my eyes, it is safer (and cheaper), to collect replicas. I do understand the allure for screen-used etc, but its so touch-and-go. If you are not an expert, (with honours, sir) , you can oh so easily get ****.

They don't even answer emails, so why would this surprise me.

As the Velociraptor arm from Jurassic Park III they sold in their latest auction...
I am not an expert but the pictures used in the auction showed a velociraptor arm on a display with the JP1 logo.
I have sent them an email to ask why and they told me that the owner believed that it was coming from the first movie. PIH has made researches and determined that it was from the third. But i've tried to see any screen match in the JP1 or JP3 movies and haven't found one. Those from the movies seems to be higher detailed even if they are not aged yet on screen... To summarize, i love Stan Winston works and don't manage to imagine that the arm showed in the PIH pictures was a screen used prop from the SWS.
I wish i am not right for the people who bought it 5500$...