Printing decal stickers at home - how do I make sure they print at the correct size to stick onto a project?

This might be a simple question but I'm new at printing artwork.

I have a small plastic replica of an arcade cabinet and I'd like to print some custom decals to stick to the sides/front of the case. To do this accurately and to scale I assume I'll need to first take accurate measurements of the dimensions, and then maybe plot these into a CAD program or even just Adobe Illustrator or something, but would appreciate some advice/wisdom on what software to use to best achieve this and then also how to make sure the artwork prints to the correct size/scale on my home inkjet printer?

Ideally I'd like to end up with some glossy decals that I can peel off and stick onto the case, but I don't know if my home inkjet printer will be able to print on that kind of sticker material.... But for now, any help with working out the size/scale problems and what design program(s) to use would be much appreciated.

If you have access to a Cricut machine, or something similar, you can take your printout, put it in the machine and have it cut it out in the exact shape you need. The main benefit is that it will cut everything out nice and neat for you. But this is only a big deal if you don't like cutting things out by hand or don't trust yourself doing so.

Thanks for the info! I don't have access to one of those machines but now I wish I did/am thinking of where I could access one, because you're right, I don't quite trust myself cutting things out by hand Luckily most of the panels are pretty much straight lines and 90º angles so I might just take my chances with a craft knife.

Re. designing/printing in something like photoshop, I'll give it a try. I bet there's a way to get an 'actual size' ruler to display on the document so I can just draw the shape of the panels and then fill them with artwork from online.

They have several different types of the water decal paper, white or clear, and also some works only on laser printer, and some on ink jet. I think most inkjets should work if you know it already prints good on normal paper.
After you get all the sizing down and create what you want, I use photoshop, I highly recommend doing a test print on normal paper, with settings low to save ink to make sure it works. I always end up doing a few tests.
Then, when you are ready for the real thing, set all the printer settings to their highest and also the paper to gloss printing.
Also, depending on the size decal you need, make sure the paper has a 3 to 4 of the decal if it can fit on the paper, even if you only needed one. That way if you mess up the decal when applying it, you have a few back ups without having to get more of the decal paper and reprinting.
Hope it works out.

Thanks, thats a good tip. I wasn't thinking about those water decals to be honest (I assume you're talking about the kind used for those 'temporary tattoos'??), I just thought I'd print on semi-glossy stickers, but I don't know if they would look any better than the 'rub-on' water type....?

peanutismint said:
Re. designing/printing in something like photoshop, I'll give it a try. I bet there's a way to get an 'actual size' ruler to display on the document so I can just draw the shape of the panels and then fill them with artwork from online.
Click to expand...

Their definitely is. In your settings, make sure to set measurements to inches as opposed to pixels or picas. Once that's done, in Photoshop, hit ctrl+R (or the Apple key + R if you're using a Mac), this will put visible rulers in your workspace. What I normally do for everything I work on is to add an extra 1/2 inch to an inch on all sides just to give me a little more space to work with and to my work better.

Heres an older youtube video, which I found super quick, showing the basics of how it works.
Theres a few more steps with applying it make it stick better, but it gets the main points across.
I can tell in the video that their printer didn't even print it very well.
Done right, it can blend pretty much perfectly onto a surface, much better than a sticker can.

Heres one I made from last year. The main emblem, which the left side was still having some issues, the words. That was all printed on clear with the model part painted white. They are quite large, which tends to have more issues then a smaller decal. 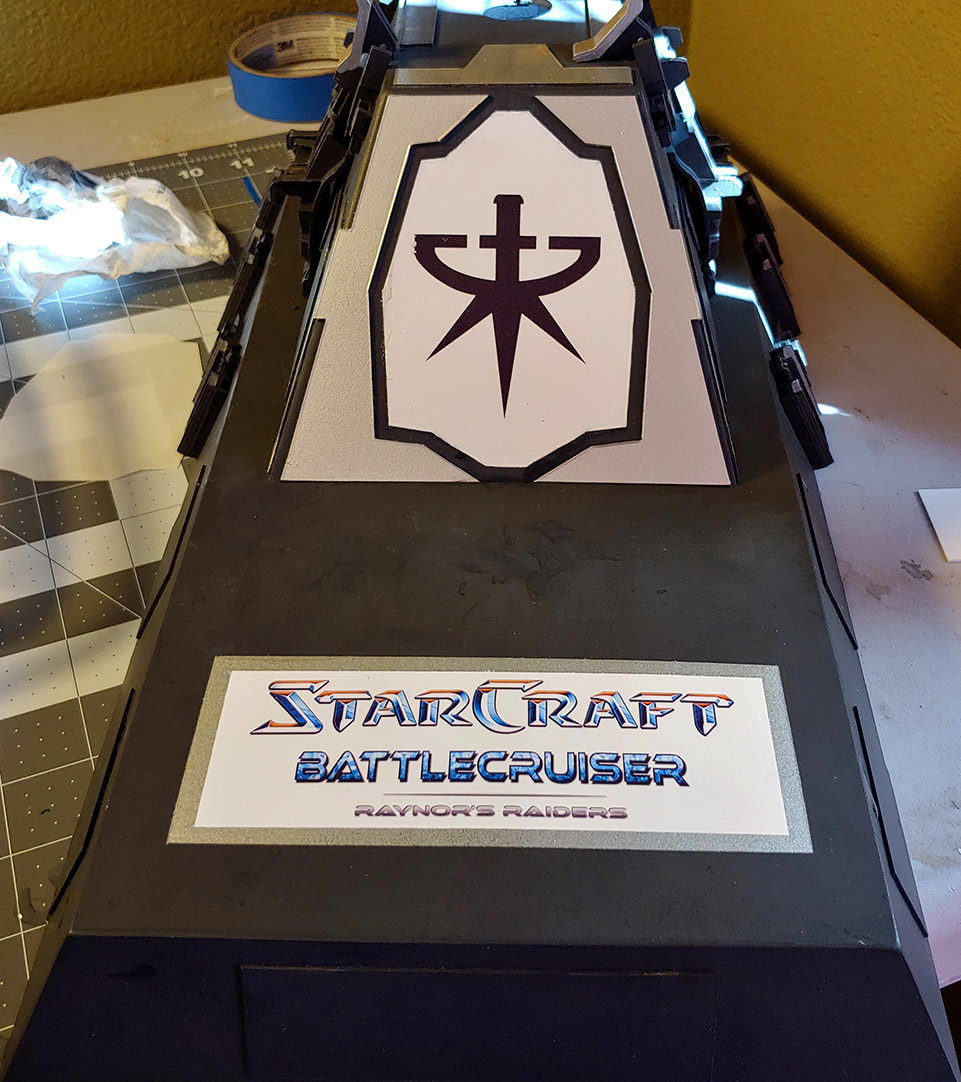 ...And, how they all look printed. (Didn't even remember taking this picture)
The left was printed on white and I had to cut it all out, BUT....I ended up messing it up and had to change it. The piece with the words is quite large and it just took a few tries to get right, and the printer was starting to run low on black, so that was changed....but the big emblem, I had cut it out, but just could not get it to spread out and lined up right, so they was changed to solid black and reprinted on clear so I could cut it out the shape it fit into instead of the actual emblem.

Awesome, thanks guys! I'll give that a try. Much appreciated.

I usually export to a PDF format from OpenOffice.Org DRAW as the Foxit PDF reader print functions are very easy to use. I make test prints on plain paper to get the scaling exactly correct, followed by using my proof print to determine exactly were I will cut out 'windows' to replace with decal print paper. This way, I don't waste inkjet decal paper. Cutting out the 'window' then serves as a guide for cutting the decal paper, which is then taped in place into the paper window. Clear 'magic' tape goes on back of course, taping the 'leading edge' and the sides to minimize the tape exposure. NOTE! This method of taping just the needed amount of decal may not work with a printer that has a 'wraparound' feed drum like many HP designs. I have an Epson photo printer, Stylus 1400 that feeds the paper through a ~80 degree turn from a back, vertical hopper out to the front. Printers that turn the paper around a drum for ~180 degrees might have a problem, though the risk is low with normal print paper and well rubbed down tape. Your call...
I also like to draw my graphics at the exact size needed and include a full size 'ruler bar' on the page to use when proof printing. So, if the printer setting is for 'no scaling' aka 100%, then the printout should have the ruler bar measure exactly (I use 1 inch bars, but of course, use what works for you...) And if the scaling is not correct, then I can adjust the scaling as needed by trial and error.
That's it, thanks!
Regards, Robert

There is vinyl or paper sticker material in 8.5x11 sheets out there. If you want to go in super low budget you can even use your own inject printer. Most print edge to edge. Also, depending on the complexity of your graphics, you can even use the paint program in windows. If you're concerned about scale, create a 5x5" square drawing and but a border around it. Print it out 100 percent on your inkjet and measure the square. If it's 5x5 your printer is calibrated.

Anyone print their own waterslide decals for models or props? Seeing if someone may be able to help print of sheet or offer suggestions on a project.

3D printing sources other than Shapeways?