has anyone ever made a predator using the original concept art. I was thinking they could use that as a primative species in a future movie.i myself like the look of the concept predators also but maybe just use the face and make the crown and dreads similar. Any opinions or answers to the question ideas or discussion out there? 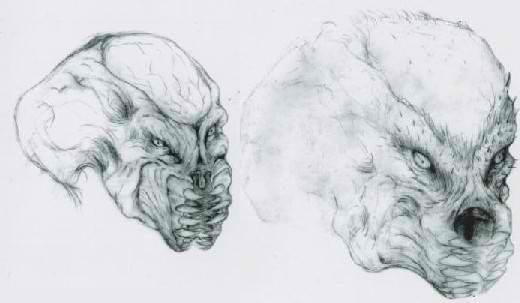 Well, I can see the influence of that particular design on the super black predator. I'm not sure dreads would look cool on that thing, though. It would be interesting to see a sculpt of the complete creature!

I think the mouth would still be roughly the same shape, ie... horizontal... it might be less developed ( like our bodily hair compared to ancient man) , or more extremely developed ( like our larger craniums and brain cavity than ancient man ) ....but it would still be a version of the same thing. I don't think the vertical mouth would change orientation throughout the evolution of the species.


My own thoughts is that the mandibles would have been bigger and more effective weapons than they are in modern Preds, because they'd have been a substitute for weapons. Just as we are less bulky than Neanderthal man because we don't need the physical strength to bring down Mammoths for food, I believe the ancient Predators would have been even more awesome than their unarmed modern day counterparts.

The Predators got their hunting mentality from somewhere, and I think that suggests that they evolved on a very violent and dangerous world where the natural animal predators would be much more of a considerable foe than a Bear or a Tiger.
Possibly akin to our dinosaurs.
Also, P1's ability in the jungle would lead me to believe they were originally an arboreal species, so possibly they had a prehensile tale of some sort which they lost through time. They might have needed longer fingernails to claw into the trees and indeed, their prey.

I think also that just like humans, they'd have been less intelligently evolved in the past, therefore maybe their cranium would have been less impressive than modern day intergalactic travelling Predators.

I'd attempt some drawings, but I'm not very good.

Would they have been larger in the past than today or smaller ? It depends on their ecosystem and prey.

Well.. if the last 3 Predator movies are anything to go by,,,,they're definately getting smaller, and their heads larger.

looks crazy man to make a sculpt of that thing would be insane XD I can see the influence from that creature on the super black pred in
predators awesome stuff XD
You must log in or register to reply here.
Share:
Facebook Twitter Reddit Pinterest Tumblr WhatsApp Email Link
Top