Predators in Review – A movie tie-in the doesn’t suck

In Predators, you play as a predator. That needs to be stated up front, lest there be any confusion as to which side you're on. You're a murderous alien, and you tear the insides out of puny humans one after another. Normally such behavior would be a no-no, but it's permitted here for several reasons: 1) they're on your planet, 2) they're trying to kill you, and 3) back on Earth they're criminals who did very bad things. Really, they had it coming.
The clunkily-titled Robert Rodriguez Presents Predators is based on the upcoming movie of the same name, and it was developed by the folks at Angry Mob, who made Guerrilla Bob, one of the better dual-stick shooters on the App Store. Predators is a universal app too, so one purchase lets you play the game in native resolution your iPhone, iPod Touch, or iPad. Not a bad deal, considering that most games based on movie licenses cost more than Predators and split their iPhone and iPad versions into two separate apps.

See more in my Blog 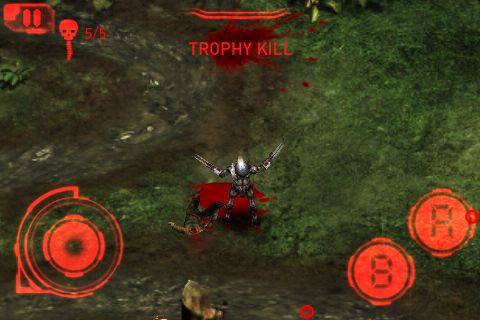