Title says it all really-

Sketches and notes I did during one of my classes last week.
The kind of class where time just stands still......

Also wrote the beginning of a little back-story for the pred design, whom I hope to begin a sculpt of in the future. Based the design on one of my creatures at home ^^ 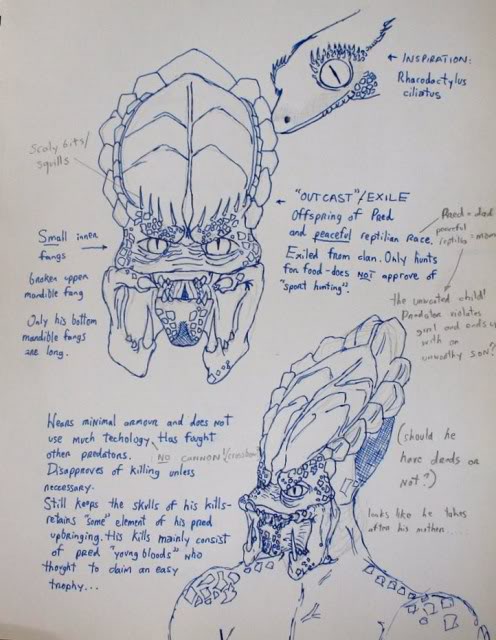 .....and then hesitated, as the meek warrior removed her helmet, revealing the terrified, yet defiant face of a young girl.

The Yaujta, for all his limited experience and years of training for this moment,

He lowered his weapon, snarling at the female. Killing those significantly weaker than himself....would be dishonourable....he mused, convincing himself it was the right decision.

The young warrior let out a series of clicks, his head slowly drooping, as he watched the girl, who had fought so valiantly as she slumped down onto her knees, surrounded by her dead comrades.
He felt something....unfamiliar, as she began to sob, checking over her dead.

Never show sympathy for your prey.
The youngblood had already done so.....
Never kill unarmed prey, or those signifcantly weaker than yourself.
The youngblood had just slaughtered an entire village with naught more than his wristblades.
Only hunt WORTHY prey.
The elder's insistance on this.....

Looking back on his decision to target this particular village....had he truly made a honorable choice?
These villagers were taken completely by surprise- only two guards- one of which was crying in front of him, devastated at being left amongst the corpses of her former friends, and, possibly family.

Did I make them my target for a challenge, as the elder did when setting out to the hive-infested planet?
Or....

The youngblood hissed in frustration, looking down upon the reptilian female...who resembled very much the prey on the planet Earth, as the prey had designated it, save for the numerous scales upon her forehead .

....did I make a target of these villagers for an easy victory?

What should I do?
He clicked at the female, who lifted her head, terrified, as the youngblood slowly knelt next to her, and raised his hand to its cold, expressionless mask.

You at least deserve to see the eyes of your enemy.
The youngblood almost frowned, pulling air hoses from its helmet, and pulling his mask free. He glanced down at her reaction, clicking loudly at her.

......Her gaze is focused intently at me. Despite the massacre she's just witnessed....she doesn't seem fazed anymore.

The youngblood's eyes widened slightly, and then looked down. He began to realise, letting out a low growl.

She isn't afraid...because she has nothing more to lose. I've slaughtered her entire village, everyone she's ever known...

I can hurt her no more.

The youngblood lowered his helmet and dropped it at the girl's feet.

This girl may have defeated me.

Th-
The youngblood did not have a second to react before the girl drew her blade with almost inperceptible speed, and plunged it deep into his stomach.

Interesting story.
The pic is a little too small, but what I can make out of it he doesnt hunt unless he needs it - like for food or defence. Is that correct?
I dont see why there should not be predators that lives this way. Ok, it may stray away from the most common view we have of predators, but he seem to follow the codes otherwise (not in the story though).
So what happens next in the story?
P

Thanks for the reply, was worried no-one would like the concept!

The general idea is that this predator is the offspring of a peaceful, pacifist reptilian race, produced when an inexperienced youngblood violated a young female (this is the beginning of the prologue) after realizing he picked an "easy target", and therefore a dishonourable hunt.

The predator in question grew up as a hybrid of both species- strong and powerful like the males of the reptilian species and the yaujta's, but also following the peacful ways that his mother taught him.
Years later,His mother tracks down the youngblood who raped her (who is now an elder) - and shows him he has an abomination of a son.

The elder is furious, and kills the mother (or perhaps not?) The reptilian predator attempts to intergrate into yaujta society, but is cast out and exiled away from the main colonies.

The exile only hunts for food, and for defense, with minimal technology (maybe favouring a crossbow, or similar over a plasmacaster?) However, he still collects trophies- although it is only the skulls of countless youngbloods, who thought to make an easy trophy of the would-be pacifist....


.....thats basically the concept of this scaly pred I have going on. The things I think up while in class lol- Any feedback or thoughts on the story or exile concept?

Any feedback would be greatly helpful.
Q

It based off of a crested gecko right?
P