Community Staff
In the early 90s my mind was blown by an ad in the back of a magazine offering a replica Predator bio-mask. I never got the mask, but that ad was my introduction to a lifelong passion, hobby, and career revolving around movie props.

Nearly 30 years later, I have obtained a grail for our collection: the Predator’s original bio-mask from 1987’s Predator. If you have already looked at the pics you are probably thinking “that isn’t the Predator’s bio-mask!” If you are a bit of a Predator fan you might even be thinking “that is the bio-mask of one of those background Predators in Predator 2.” This IS the bio-mask Matt Rose sculpted in 1986 for the first film but it was not used in favor of the more generic (but now iconic) bio-mask which hid the facial structure of the creature for a bigger reveal at the end of the film. I like this first design better as it more closely matches the design of the rest of the Predator’s armor and weaponry. It is covered in greebles, giving it a complex and hi-tech look. Below is a bit of history about the bio-mask over the past 30 years.

Predator (1987)
This bio-mask was sculpted by Matt Rose (credited as art department coordinator: creature effects unit) in Nov 1986 and Painted by Screaming Mad George (credited as creature effects crew) in late Nov (immediately following Thanksgiving), 1986. It was designed to match the hi-tech look of the Predator’s armor and weaponry and uses greebles from the same model kits as found on those props. As Shannon Shea (credited as art department coordinator: creature effects unit) described it, the bio-mask was sculpted to be “intimidating, beautiful, and yet look somewhat functional” Richard Landon (credited as mechanical department: creature effects unit / puppeteer) describes it as being a “highly detailed mechanical sculpture, to look like armor, and an atmosphere filter, so the Predator could breathe.” Stan Winston studios describes it as a “mechanical interpretation of the creature’s face.” This description encapsulates why this bio-mask wasn’t used. According to Shannon Shea, Producer, Joel Silver “hated it instantly” and felt “Matt’s design ‘tipped the hand’ too much revealing what was going on underneath.” He, Silver, wanted mystery and a big reveal.

The bio-mask with completed costume from Predator. 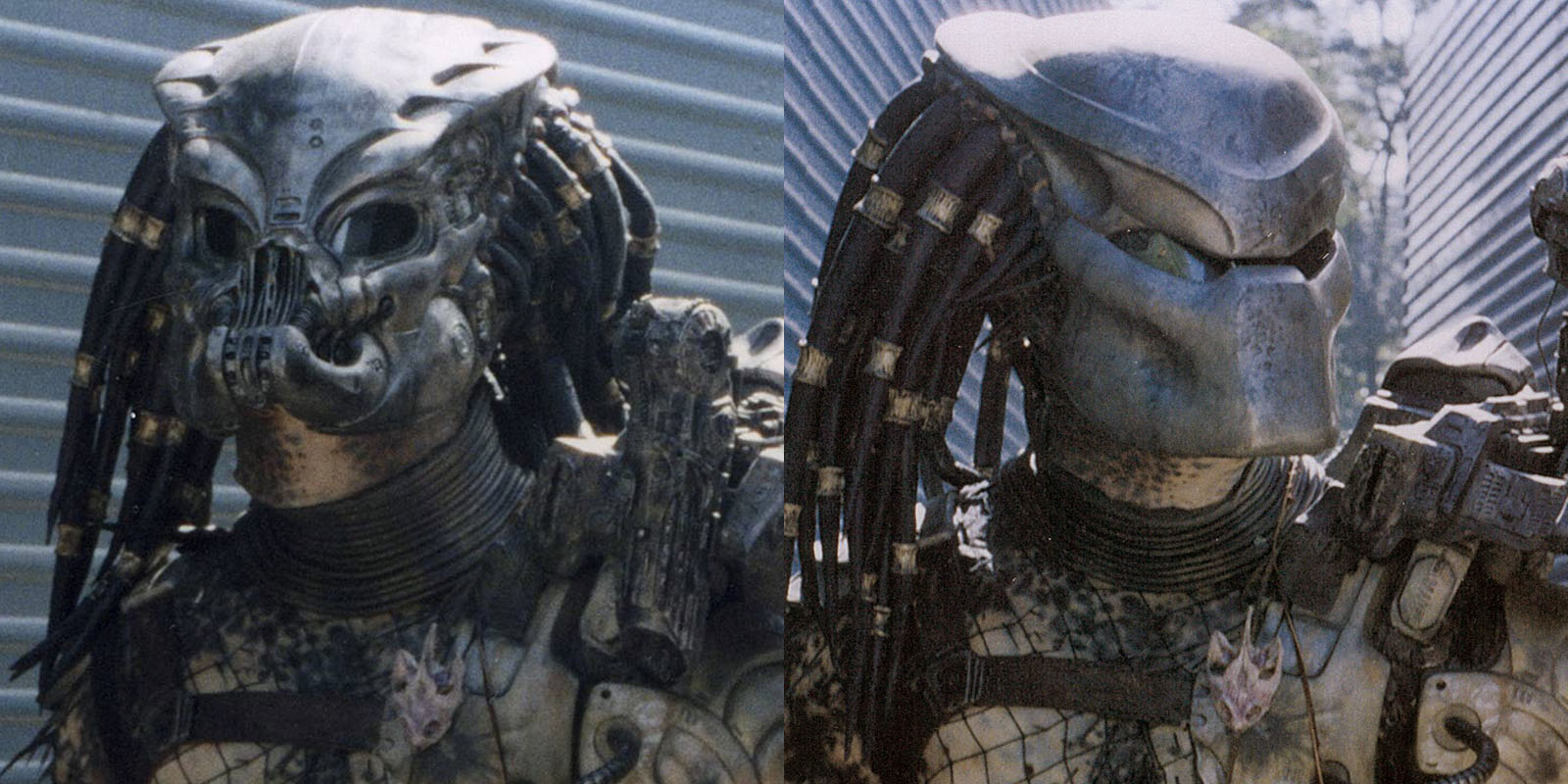 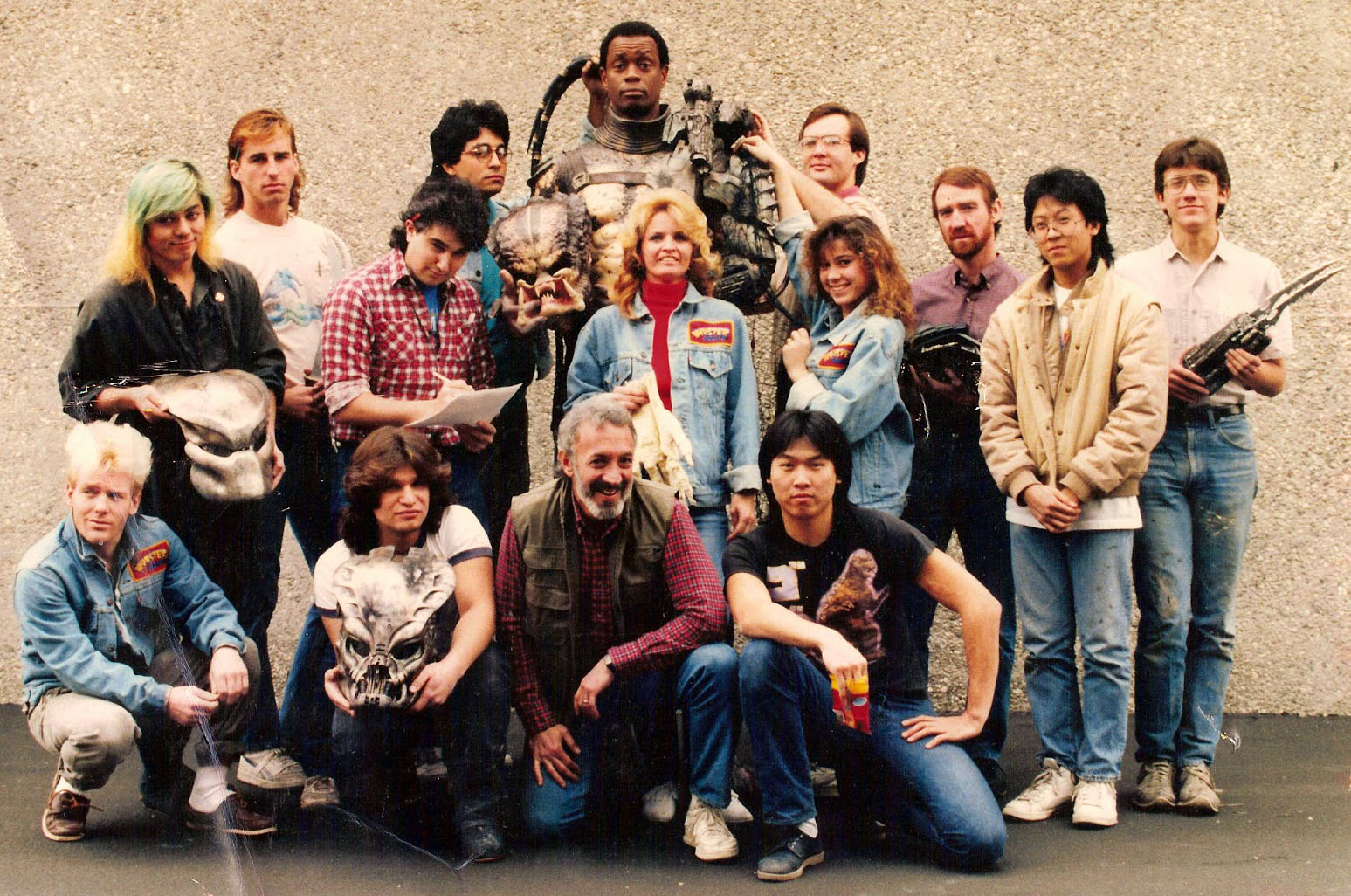 Predator 2 (1990)
I’d like to tell you my bio-mask was finally seen on screen at the end of Predator 2 when the “Lost Predators” make an appearance, but it is unlikely. It seems that there are two of this style of bio-mask, and the differences are only the SLIGHTEST bit of paint. The Predator known as the Guardian (or Gort to fans) wears the alternate bio-mask and is seen in multiple shots on the Predator ship. The bio-mask, as seen in the photos below, is easily screen-matched in these scenes. 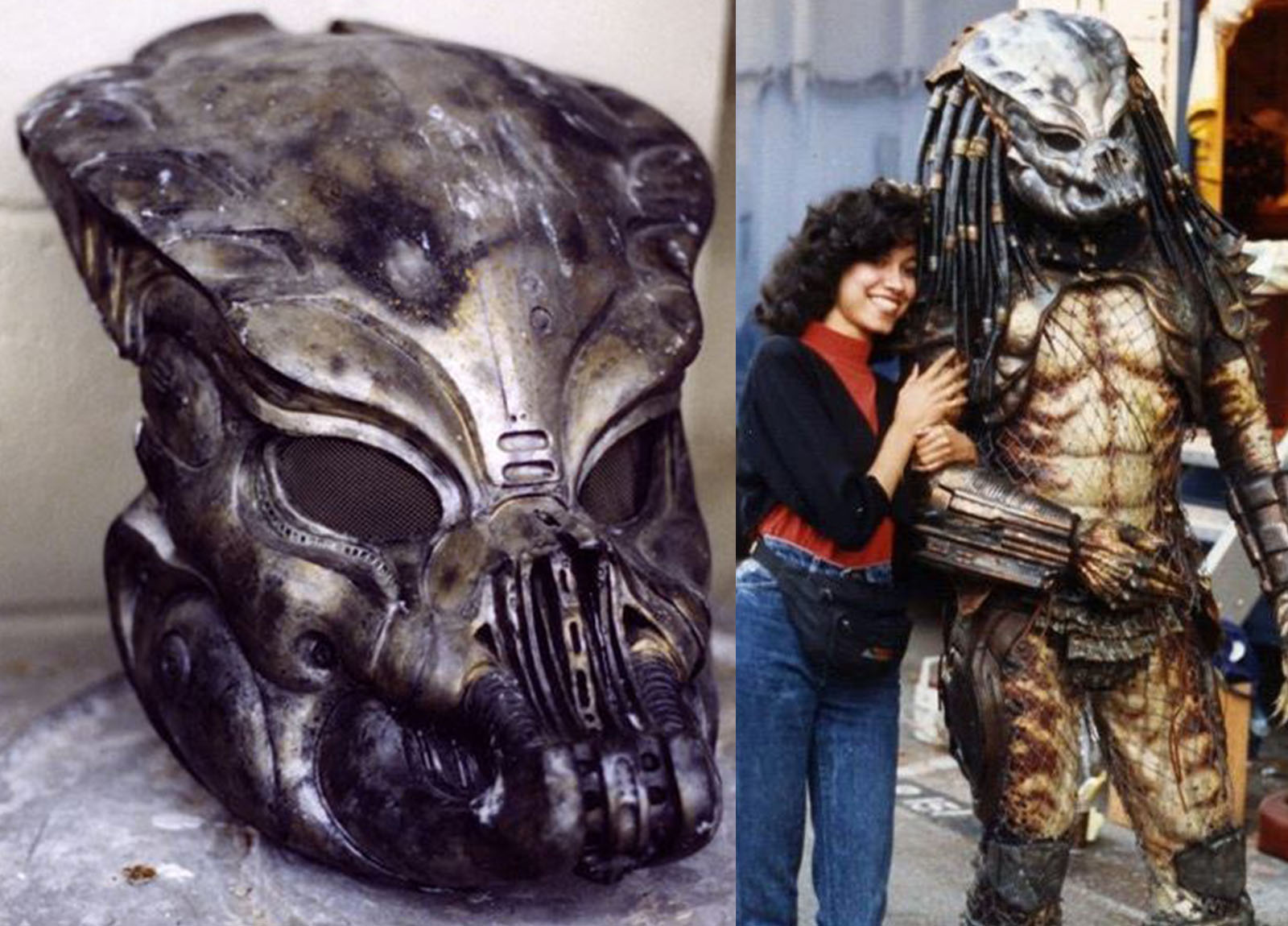 Bio-mask as seen in Predator 2 (sadly, NOT mine). Note that the lenses have been replaced with mesh.

Bio-mask as seen in Predator 2.

Coolprops
Coolprops is a prop company based out of Japan who have brought a number of Alien and Predator products to market that were created using original filming assets. While unverified, it seems that Coolprops took possession of the bio-mask seen in Predator 2 and recast it for their 2013 “Guardian Predator Helmet” prop replica product. Planet Hollywood still had the original bio-mask at that time so it is very unlikely their product was based off the original bio-mask. I have one of the Coolprops masks and in comparing it to the original, there are the typical differences you would expect in a mass-produced replica prop; the paint is very one dimensional, most of the edges and details have been softened, some details have been rebuilt, some very small details are missing entirely. Don't get me wrong. It is a great replica, but there is quite a bit of difference between the replica and the original.

Planet Hollywood
The Predators that appear at the end of Predator 2 are often referred to as the “Lost Hunters.” This is supposedly because the costumes and masks for these characters were ‘lost’ after production. In the years following, many have surfaced in private collections. Because the original bio-mask does not seem to be the exact same item as is seen in Predator 2, it is unclear how it passed from the studio to private hands, but its first appearance was in a 1993 Butterfield and Butterfield auction:

This is almost the exact verbiage from the Butterfield and Butterfield auction, which implies Planet Hollywood was the buyer and the bio-mask was been with Planet Hollywood from March 1993 to June 2018, 25 years!
One interesting change is that the helmet now has metal mesh over the eyes as opposed to lenses. It is unknown if the mesh was always there (but hard to see) and backed by lens material or if the lens material was removed and replaced with mesh.

(Left) Image from Butterfield and Butterfield Catalog (Center and Right) bio-mask on Display at Planet Hollywood, London after 2003 remodel.

Profiles in History
Profiles in History held an “Icons &Legends of Hollywood” auction on June5-8, 2018. Many of the lots were previously owned by Planet Hollywood. The original bio-mask was lot # 1126. I called in a lot of favors, begging every Predator enthusiast I knew who even might consider bidding in the auction to not bid on this lot. They agreed and held to their word, despite temptation. There was only one bid; mine. I still can’t believe I own this piece of Predator history. It is by far, the most meaningful prop in my collection and closes a circle that started for me more than 27 years ago.

Additional photos taken at Profiles in History for the purpose of researching/verifying the helmet prior to the auction.

The Original Bio-Mask Today
I received the bio-mask this morning and want to share my findings and/or things that may not be obvious from photos.

That is about all I can think to say. I can't wait to get this properly displayed. Thanks for reading and enjoy the photos! 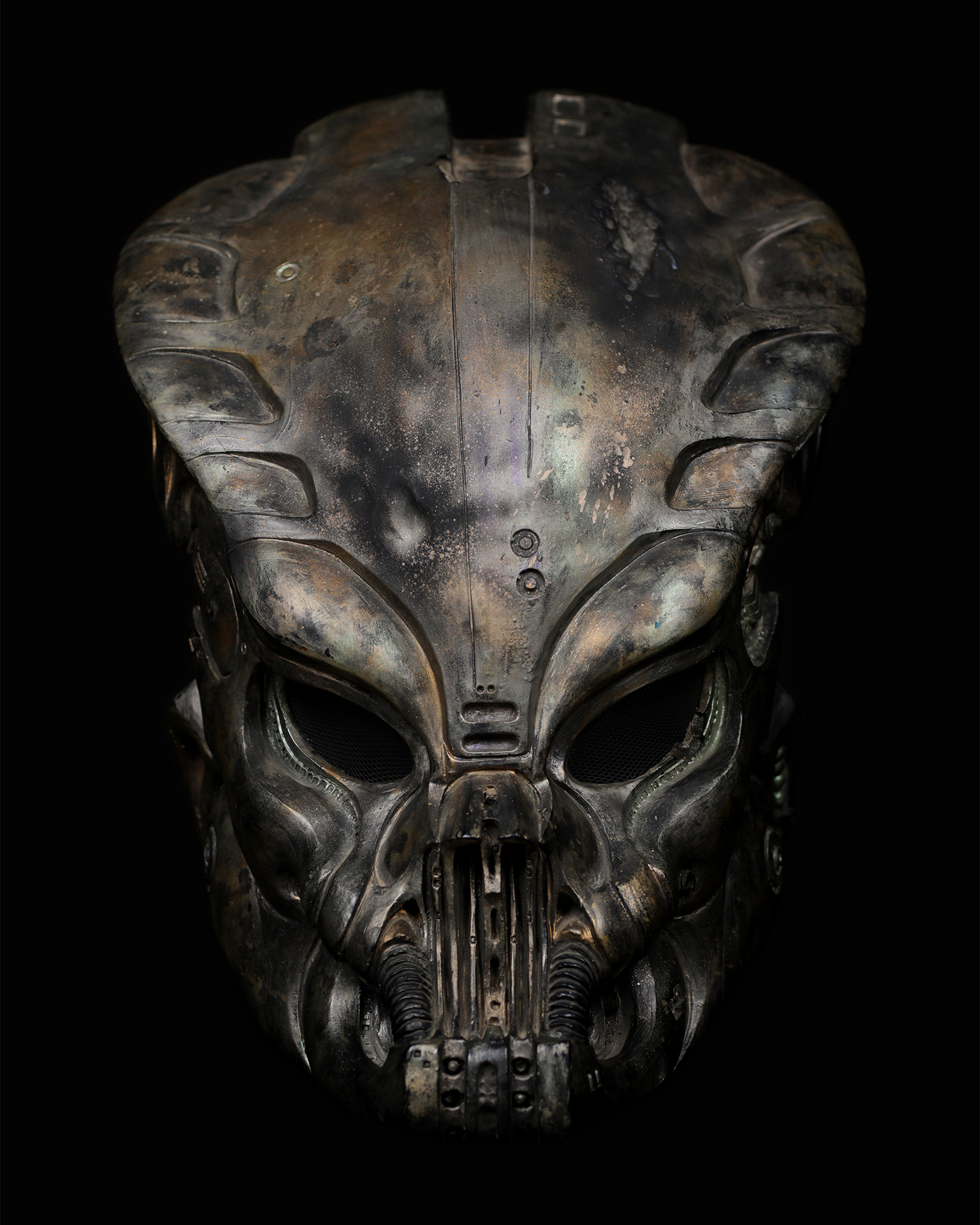 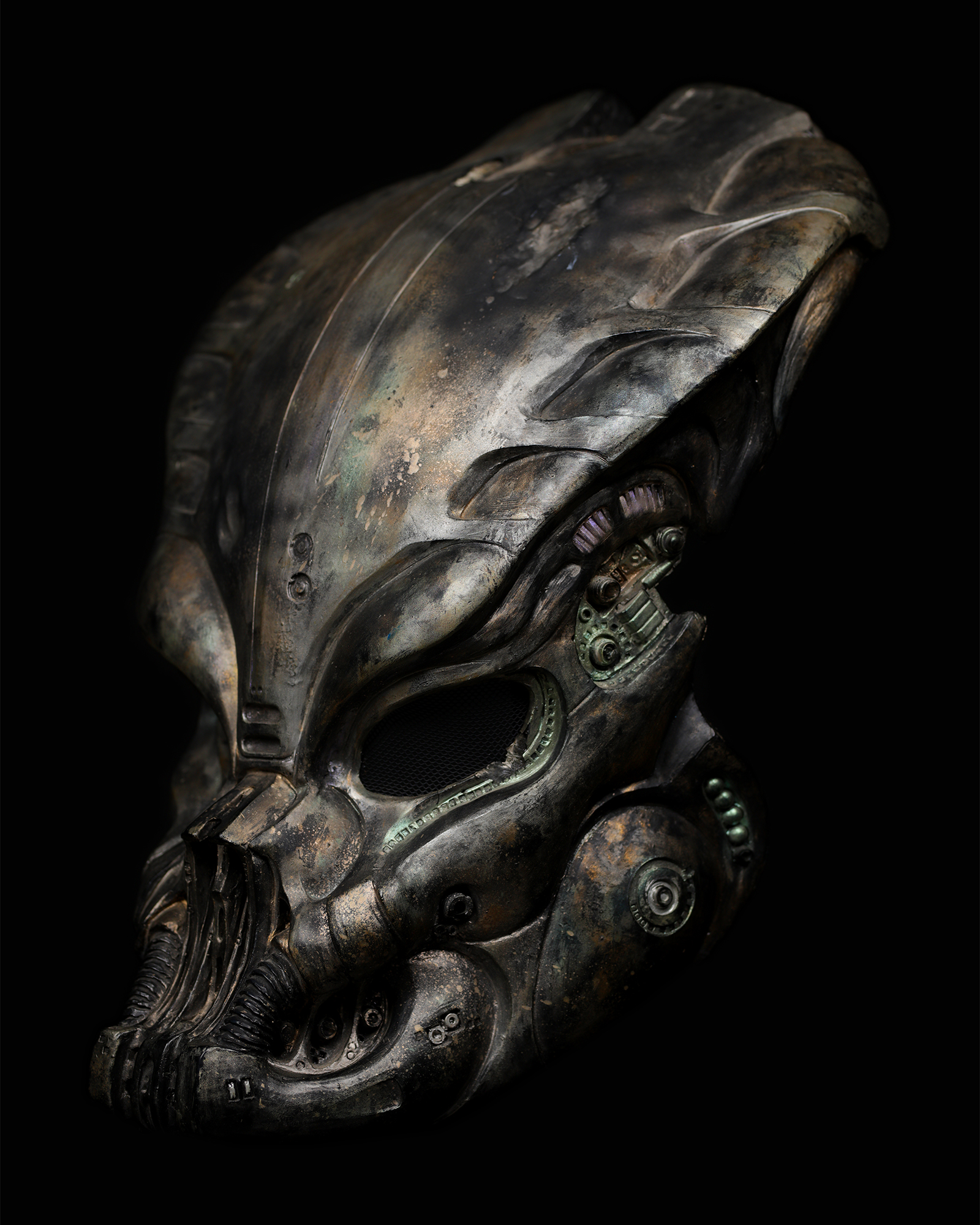 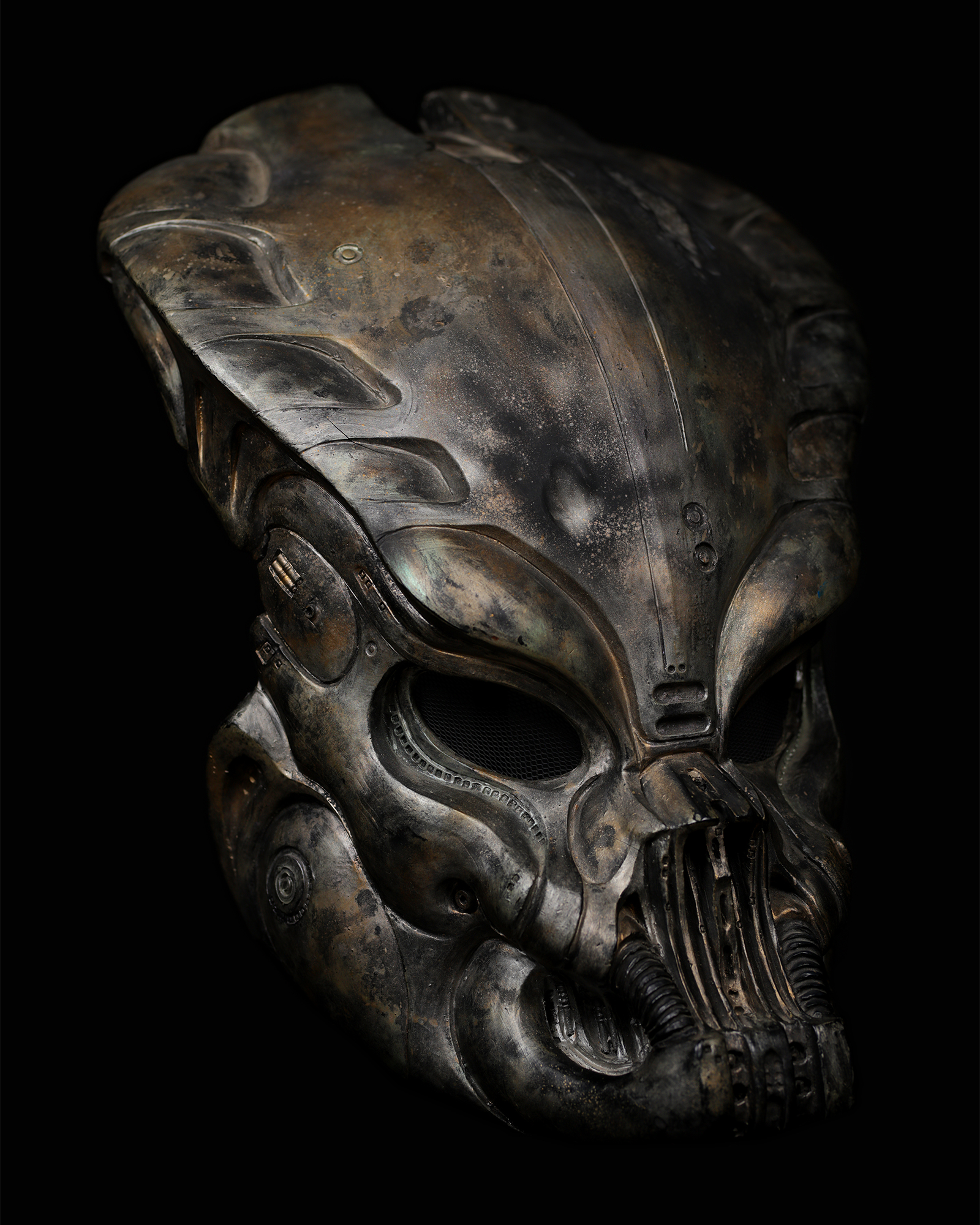 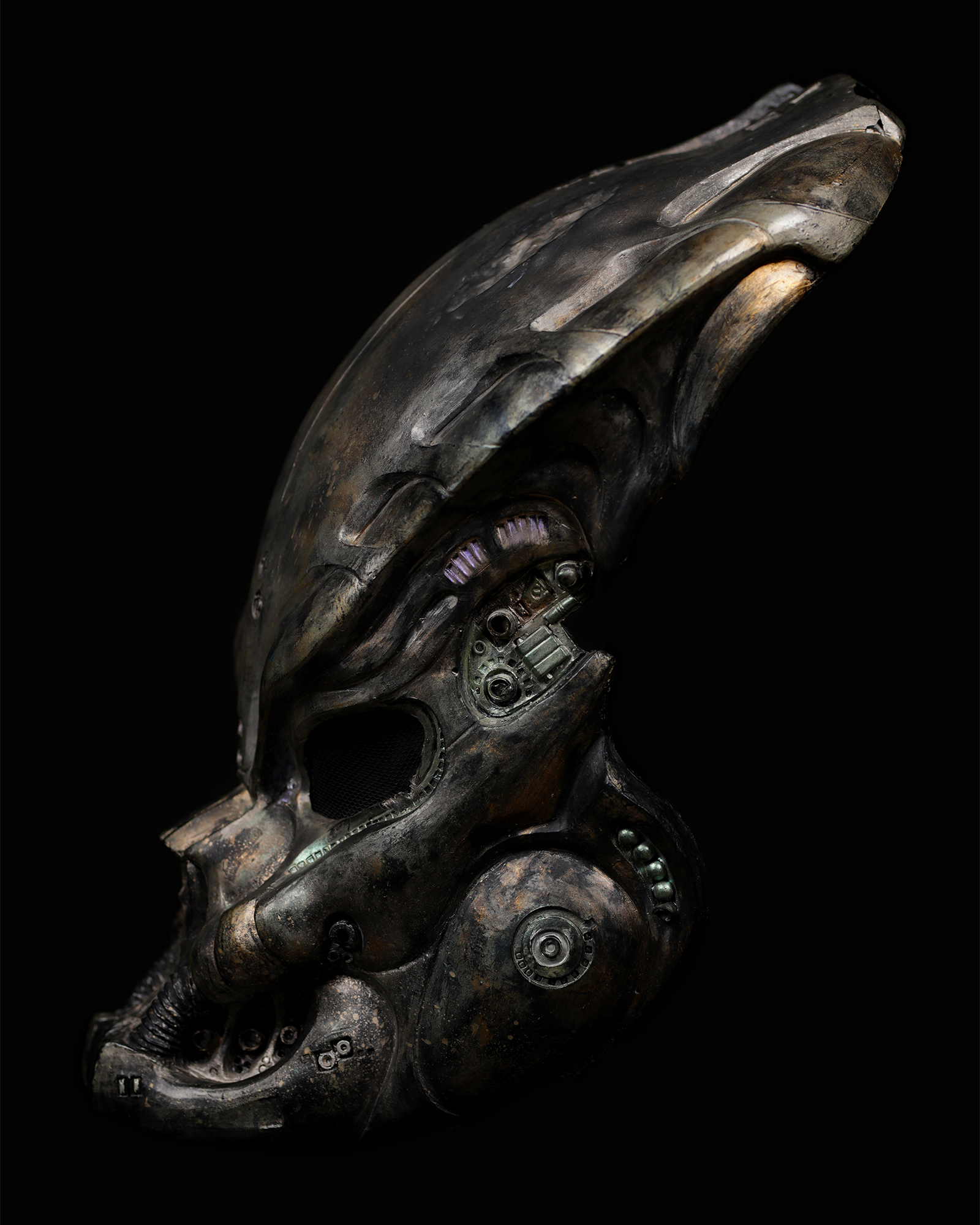 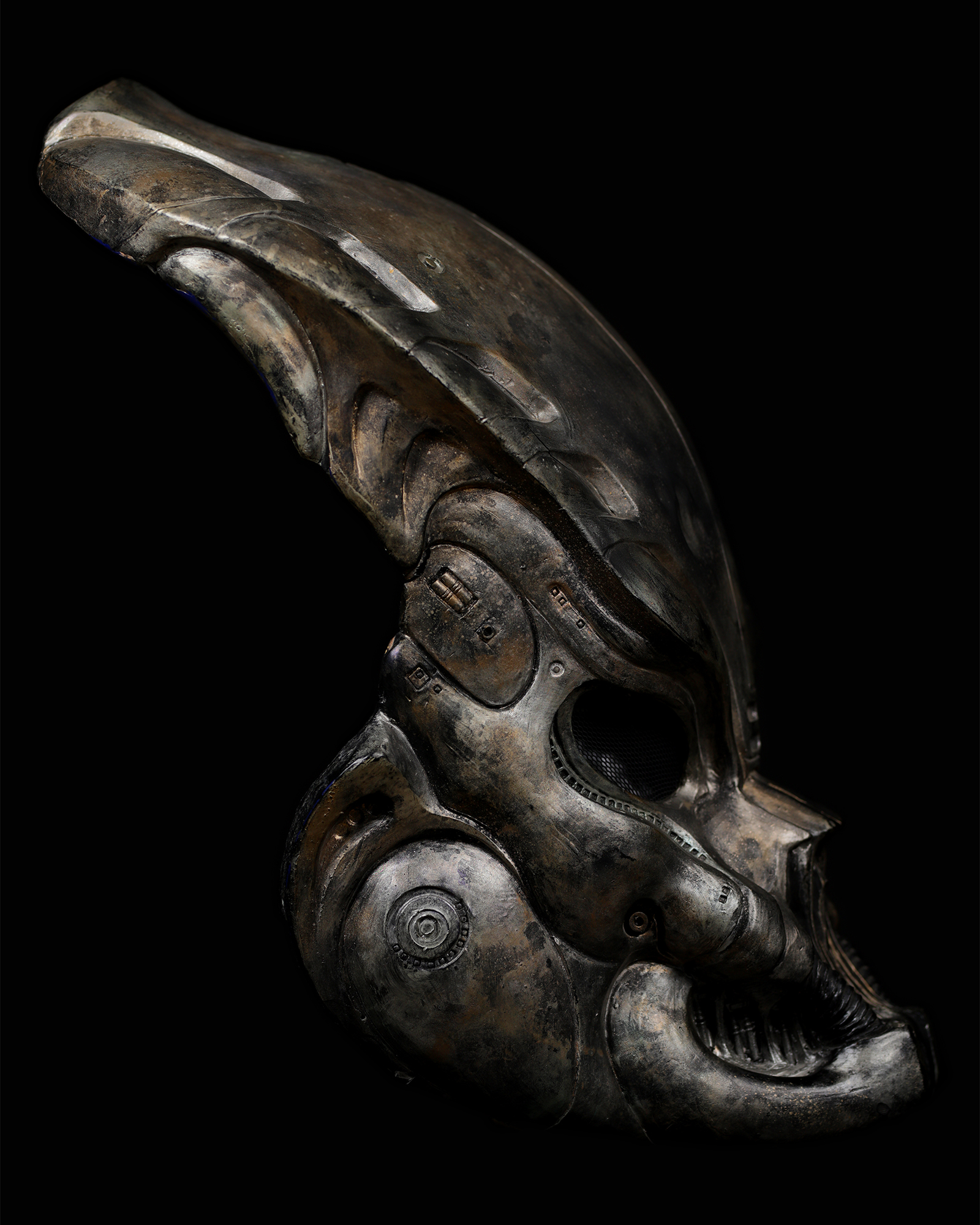 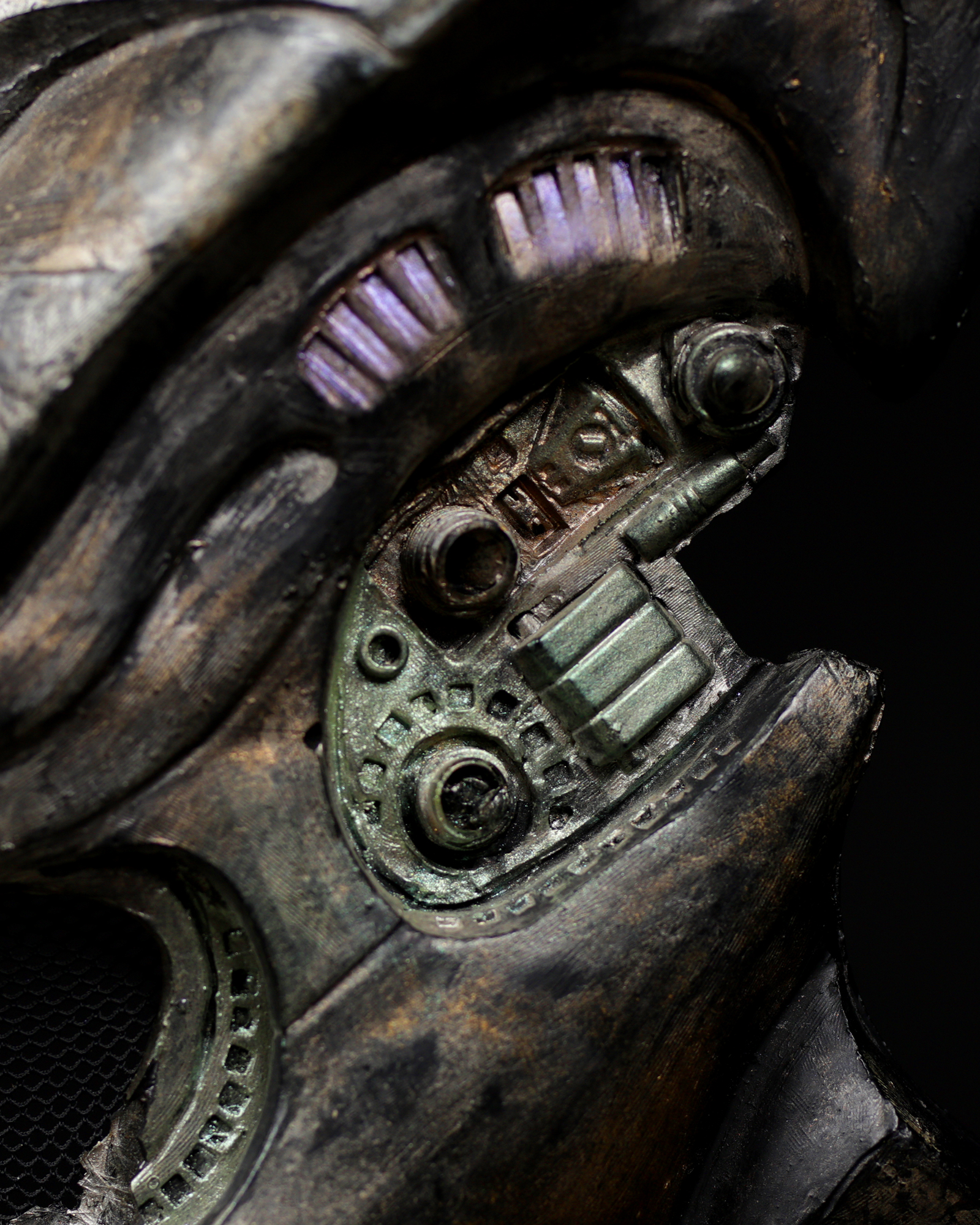 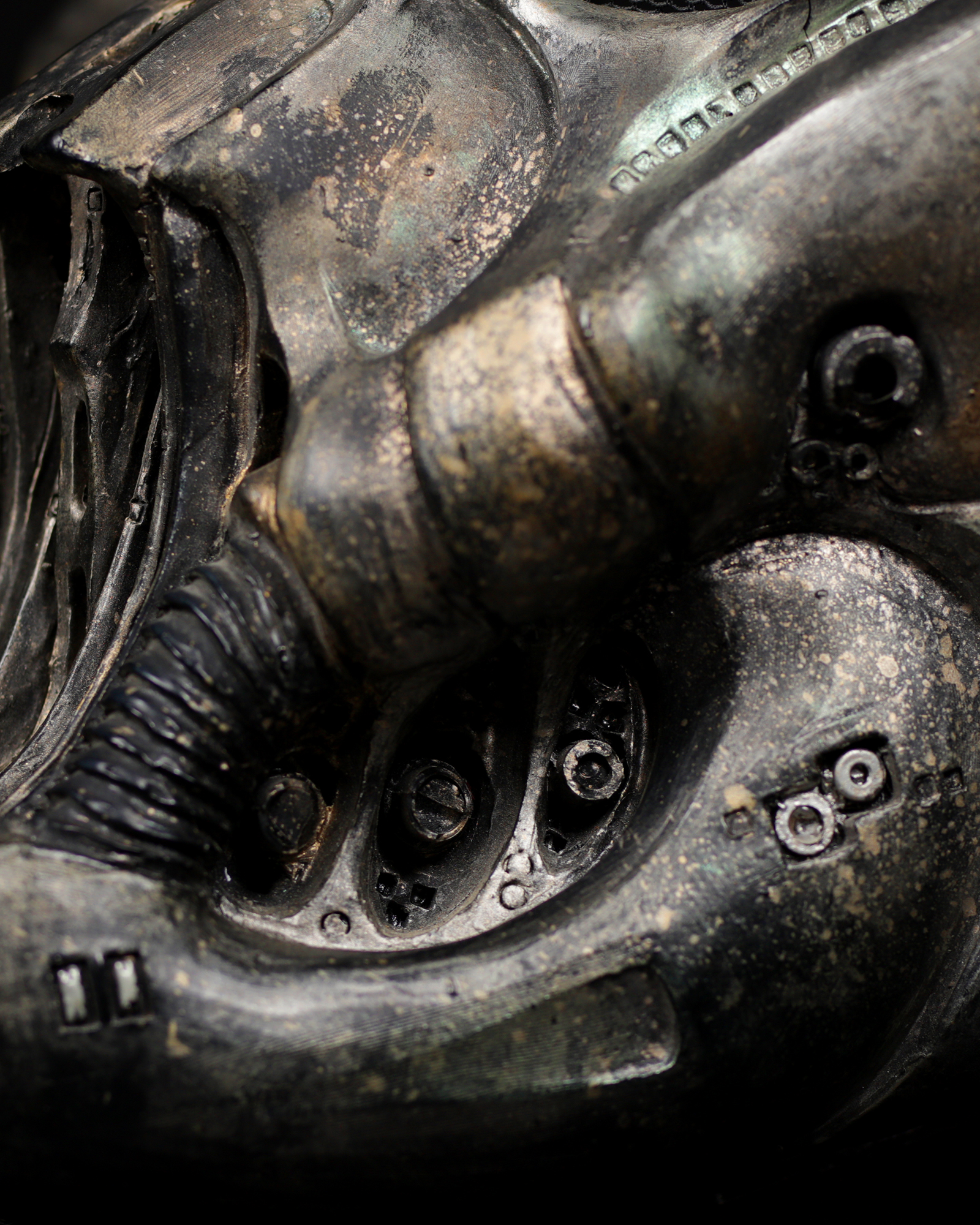 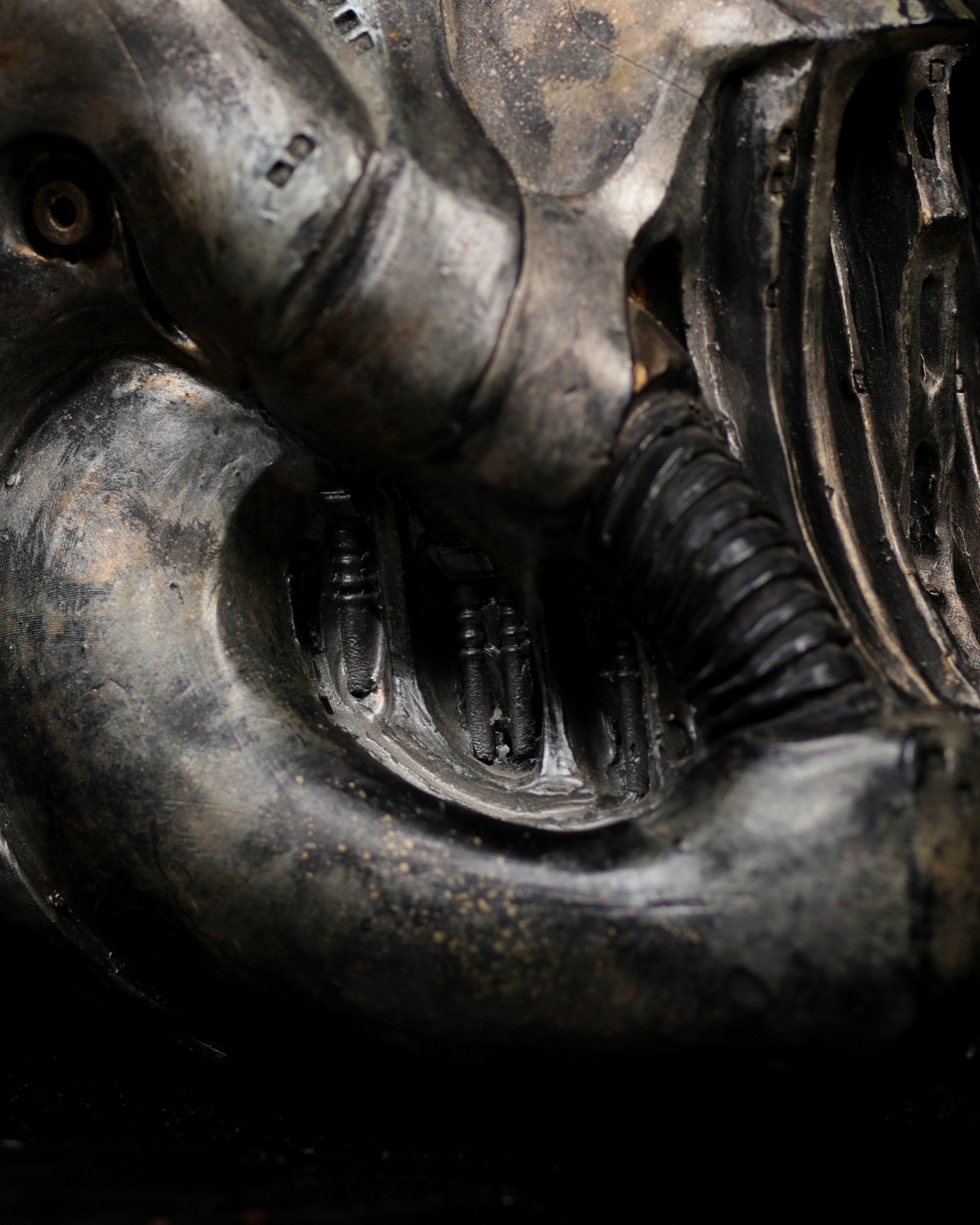 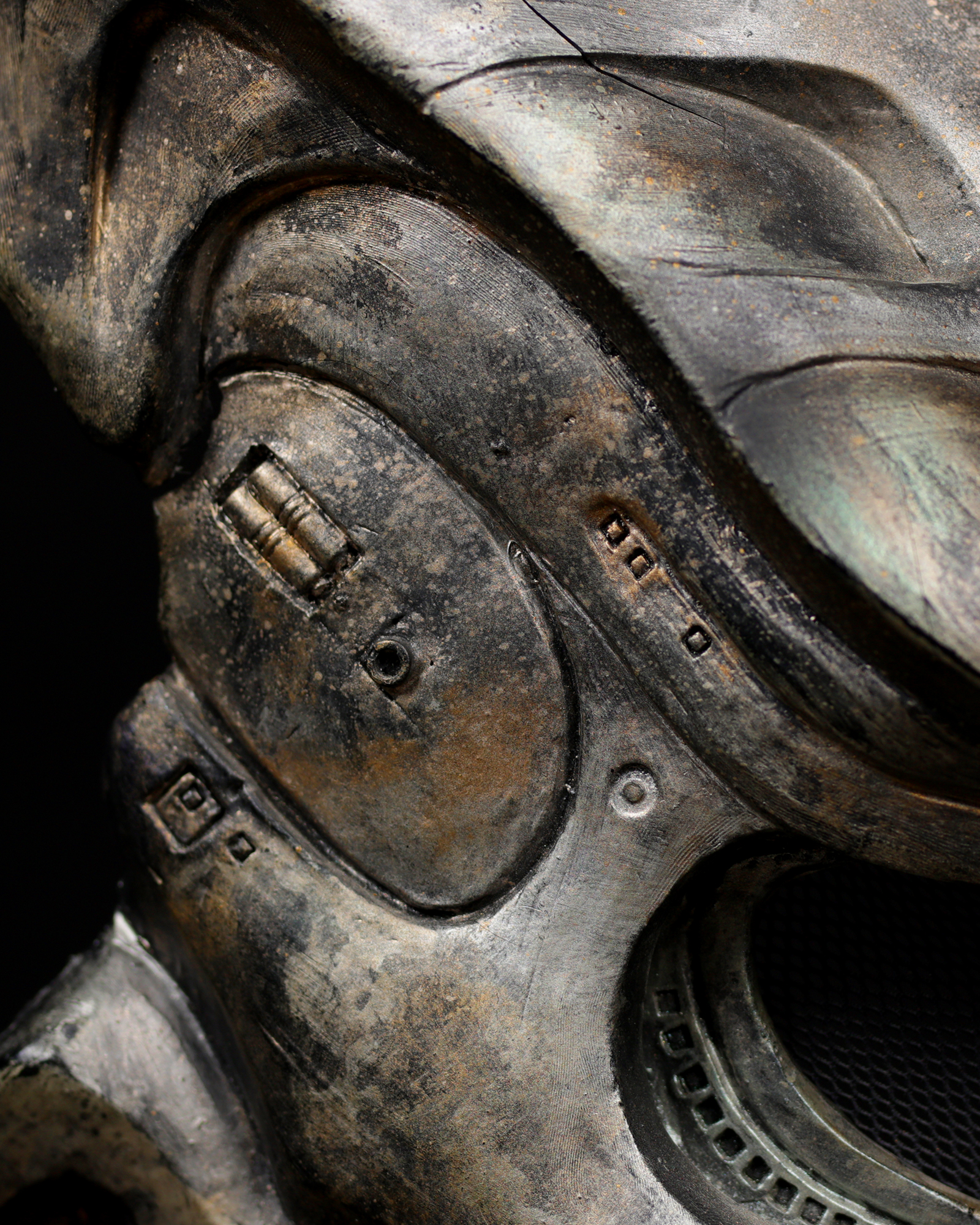 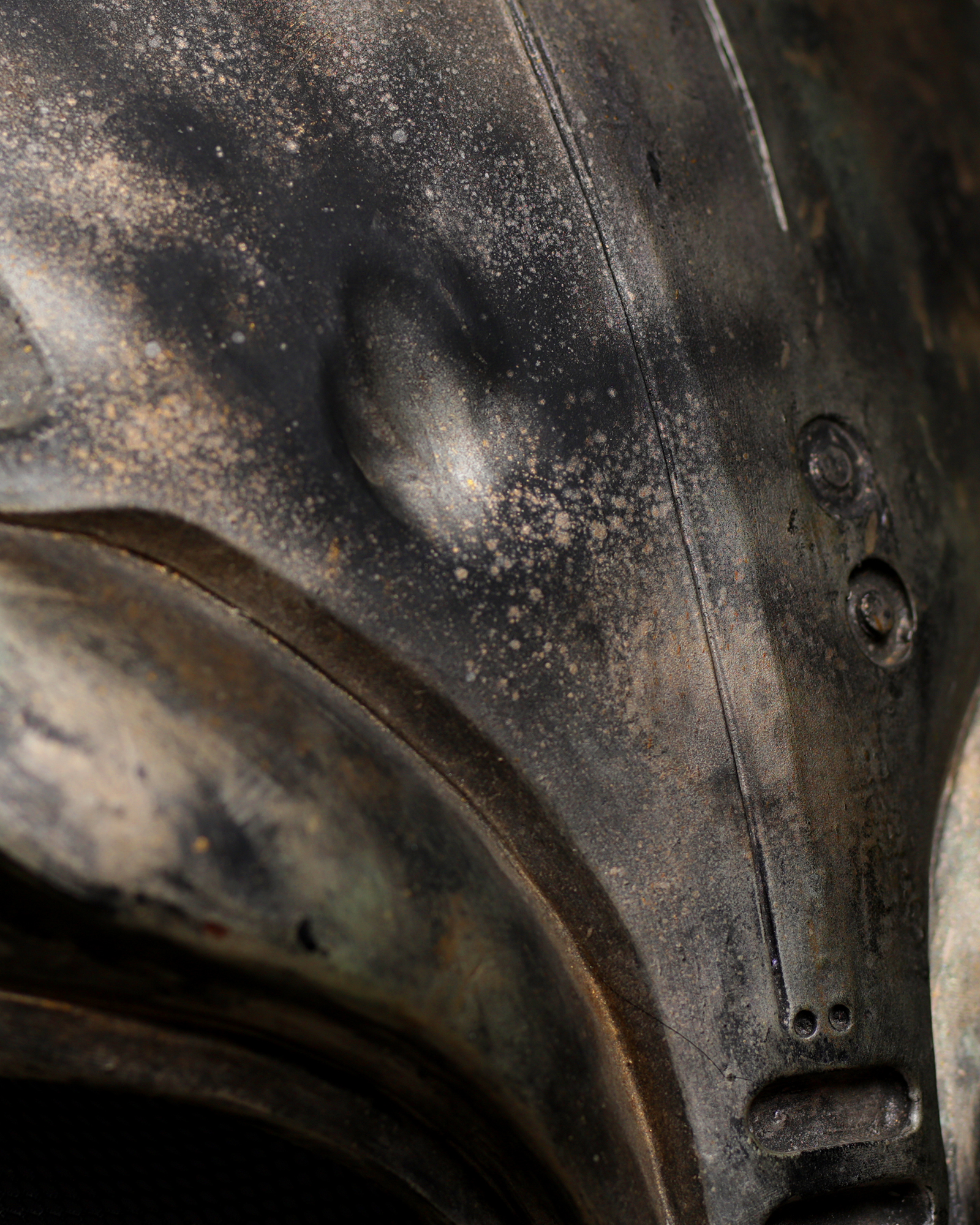 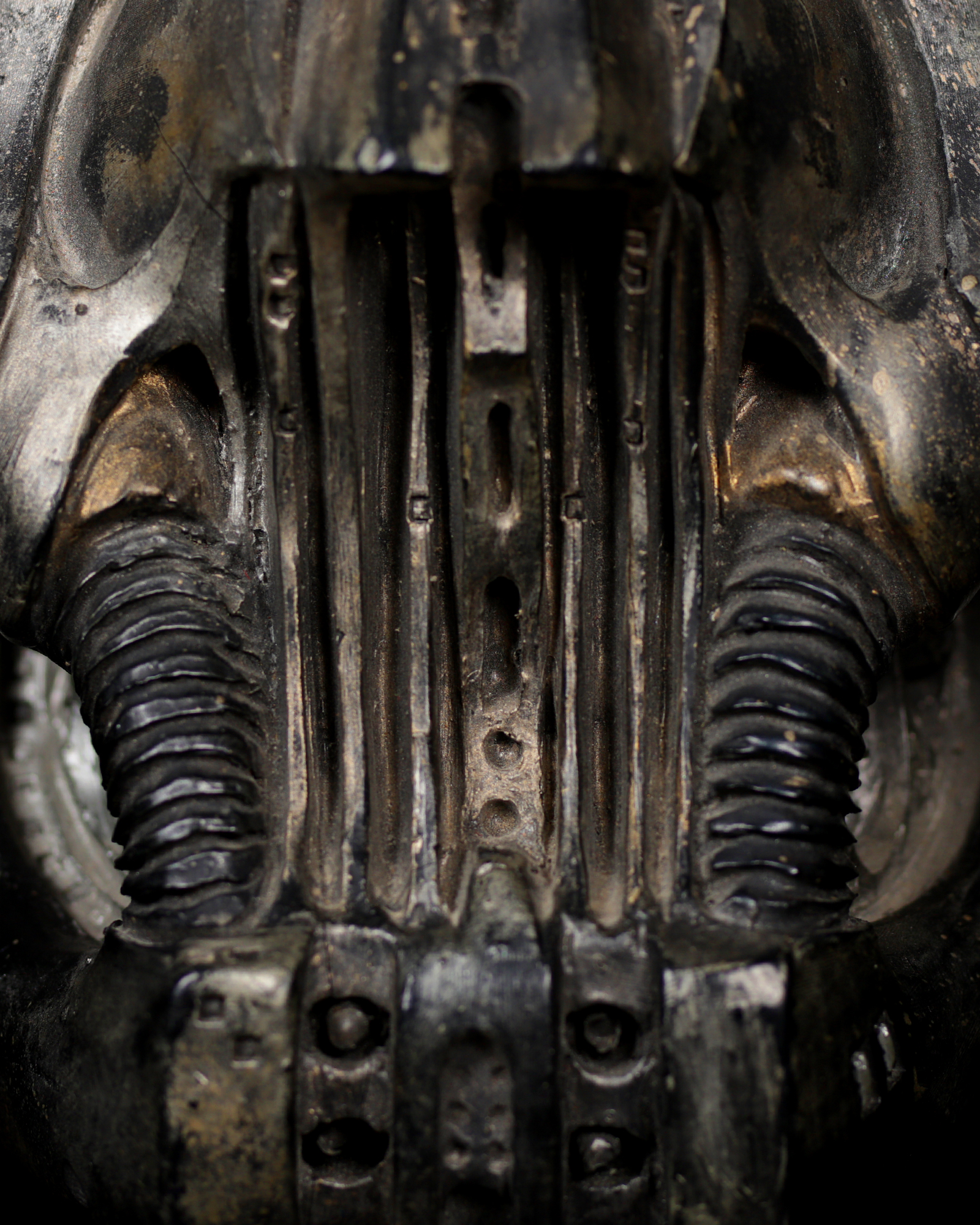 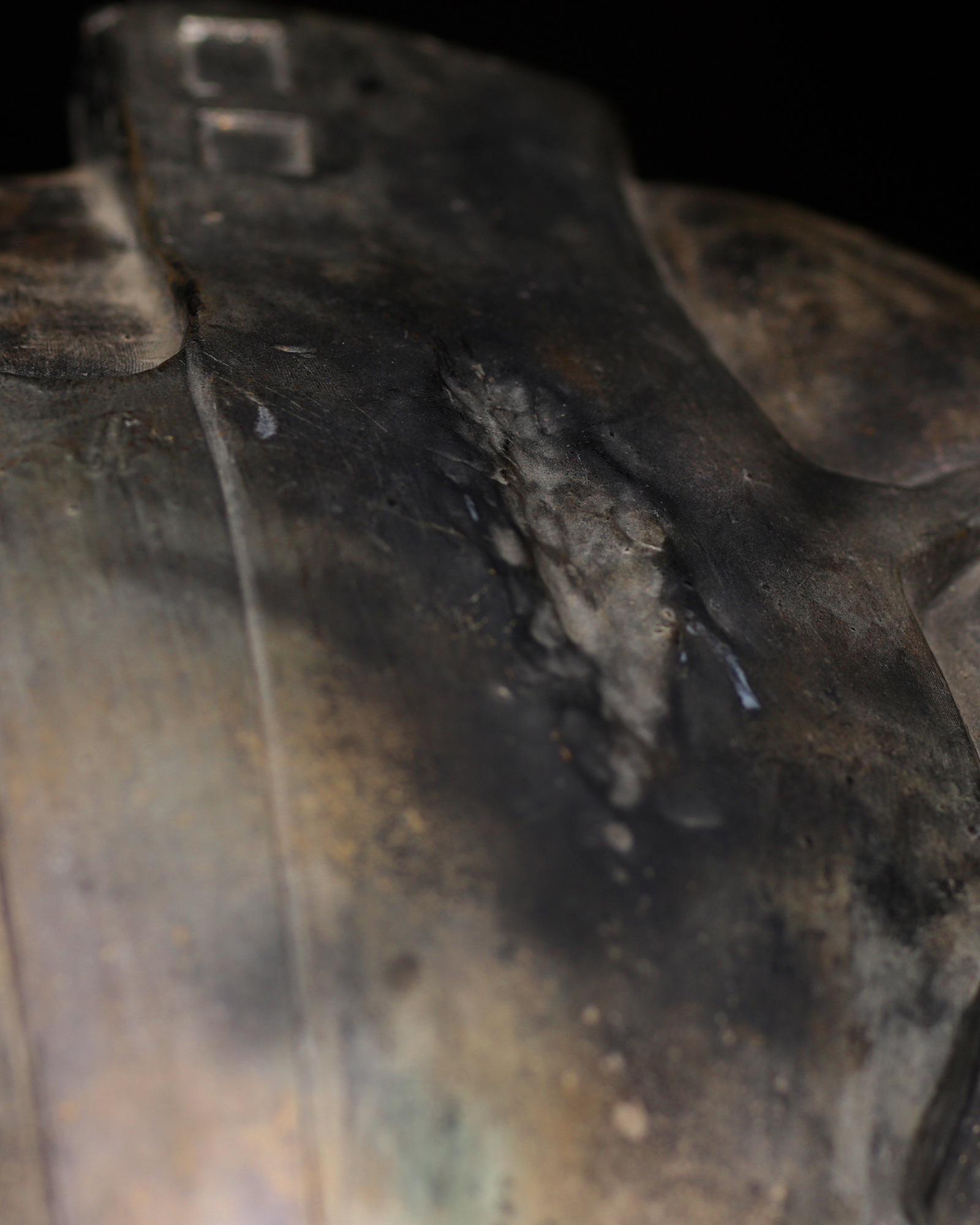 Extended comments from members of the production

Shannon Shea (abbreviated)
First Person Monster Blog: Part 46: The Saga of THE PREDATOR, Part 2
When I returned to the studio on Monday morning [after Thanksgiving, 1986], I was surprised to see some new faces working there including Screaming Mad George who was painting a fiberglass Predator helmet that Matt had sculpted.
By now, I'm sure that most of you know that the iconic helmet or "mask" of the Predator underwent changes during the build. Yes, production had given us a piece of artwork that has been attributed by veteran VFX artist/designer/supervisor Alan Munro.
However, we weren't following Alan's design to the letter and so Matt sculpted the first mask to be intimidating, beautiful, and yet look somewhat functional.
On the day of the Los Angeles (technically, it would be Northridge, California) fitting, producer Joel Silver, director John McTiernan, and Kevin Peter Hall showed up at Stan's. We put Matt's original helmet on to show them. Joel hated it instantly. He said that part of the mystery of the Predator was that first he was "invisible" then next when we see him, he's wearing a mask, and finally he takes the mask off to reveal the face. Matt's design "tipped the hand" too much revealing what was going on underneath. Matt, Steve, and I didn't agree. We loved Matt's mask, but being professional, commercial artists, a new mask had to be sculpted AND FAST!

Richard Landon
The John McTiernan's PREDATOR page
We created two masks for the Predator. The producer Joel Silver looked at both with his director. The first one was a highly detailed mechanical sculpture, to look like armor, and an atmosphere filter, so the Predator could breathe. When Joel saw this busier mask, he said "I love it - we're going with the plainer one though. This looks like it could be what the creature actually looks like. We want the audience waiting from the first second they see him for that mask to come off." The director agreed fully.

Absolutley a Grail Piece!
Thanks for sharing those great pictures! Will certainly help me when sculpting predator bio's and armor in the future

Community Staff
Marwan asked for some comparisons. Here is the Original P1 compared to George's excellent replica (cast from the original mold). 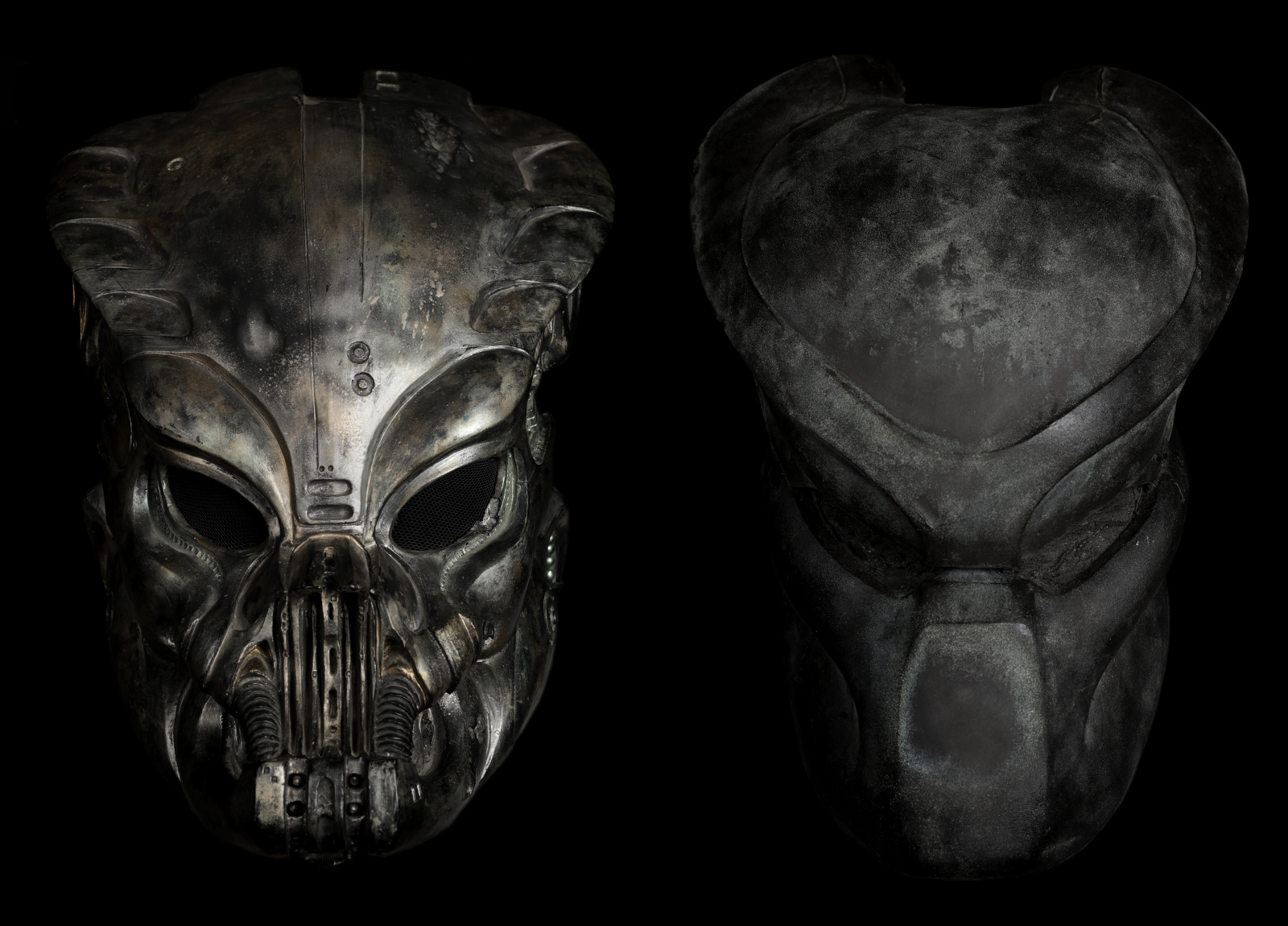 Here is the Original P1 compared to my screen used Berserker. The biggest thing to note here is the difference in angle and size. The Berkserker is MUCH larger. 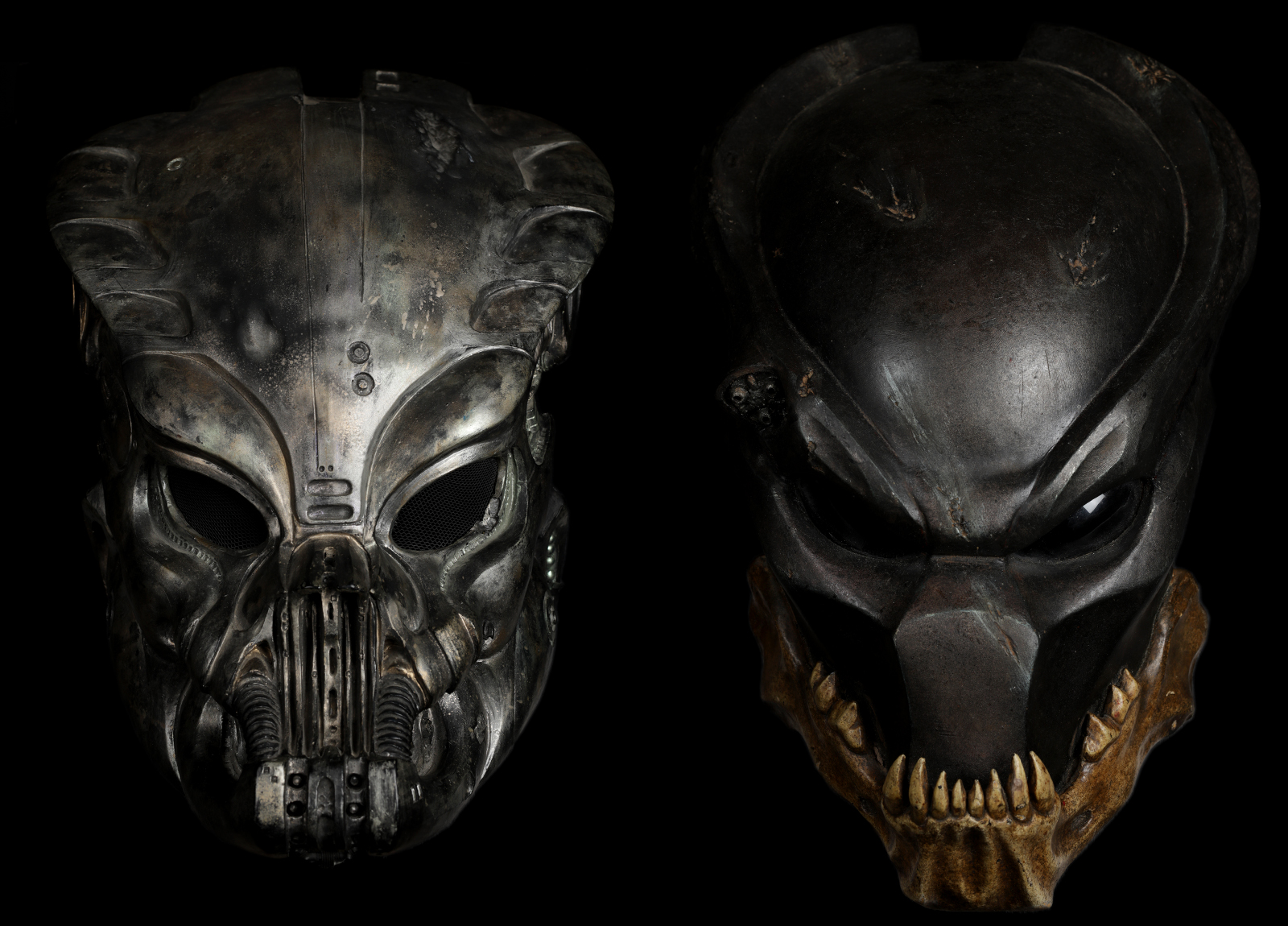 Sorry for the crappy cutouts around the edges. Was in a bit of hurry.

!!!!
These side by sides are amazing, you were completely right about the Berserker not fitting in well with the Gort/P1. Amazing photos!

Wreav said:
!!!!
These side by sides are amazing, you were completely right about the Berserker not fitting in well with the Gort/P1. Amazing photos!
Click to expand...

I really thought it would give a bit of an "evolution" look.. but no... they just clash.

I'd say the reason the "Evolution" doesn't show is that imo it could only be showcased in comparison to the screened p1 Bio since the Berserker Bio emulates characteristics of the simpler helmet.
Also, I'm guessing Berserkers different head shape didn't help, but still very interesting to see them side by side.

It goes back to what Art said in his original post, they aren't meant to be together there was a film all about them going head to head with one another. Jungle Hunters vs Super Preds.

Awesome, didn't know you owned the original Gort bio and the paint-up is simply amazing! It's a very unique bio and I've always wondered where they would've added the tri-lasers in the mask. It's also interesting to note just how small the bio is on the P1 mask.

I find this to be a FANTASTIC thread! What a GREAT post Art! So, snippet from the peanut gallery.....I find the Cool Props replica to be just fine and I understand your comments etc about it perfectly but I would love to have one, it actually looks more metallic to me and though looking like a production item, it's still a great piece. However I have one....minor but burning question. What did the bio that Joel Silver 'hate' (but everyone else liked) actually look like? 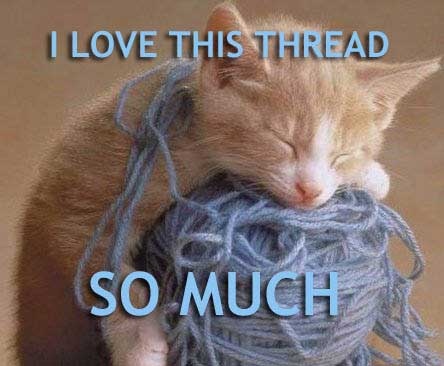 Community Staff
Several people asked for additional photos. These are more "neutral" images that give a more natural look at the helmet.

Community Staff
And here is the CoolProps helmet under the exact same lighting conditions. Please keep in mind this helmet has been touched up... this is not the CoolProps paintjob.

Rodewaryer said:
However I have one....minor but burning question. What did the bio that Joel Silver 'hate' (but everyone else liked) actually look like?
Click to expand...

THIS is that helmet!

Thank you so much for sharing these pics. They're inspiring and the Stan Winston and staff pic gives me chills!

Thank you so much for sharing. I may repaint one day my Coolprops Gort and you excellent pictures will help a lot. I see so much gold, metallic purple and pale green! BTW It's funny how they kept the frontal blaster hit in the forehead in the definitive bio.

spinner 44 said:
Thank you so much for sharing. I may repaint one day my Coolprops Gort and you excellent pictures will help a lot. I see so much gold, metallic purple and pale green! BTW It's funny how they kept the frontal blaster hit in the forehead in the definitive bio.
Click to expand...

Looking forward to your repaint!

THIS IS SO AMAZING!!! Thanks for sharing with everyone. Quick question, what does under the chin look like?