First off, I apologize if this post is against the rules. I've tried everything to get in touch with Art for the last week to ask permission to post about it, but I've gotten no response to emails or PM's here and on The RPF. I'm not a predator costumer, and I didn't want to flood the forum with useless posts just to increase my post count. I've been a member of the RPF for a long time though, and meet the seller requirements there.

Anyway, what I'd like to tell you about is this: 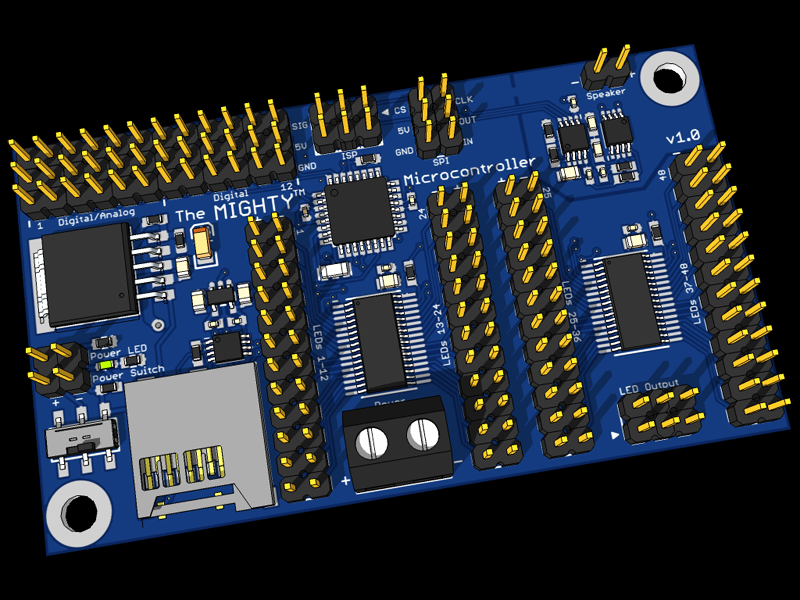 This is the MIGHTY Microcontroller, and I have a Kickstarter campaign going to raise fundng it:
http://www.kickstarter.com/projects/shawnswift/the-mightytm-microcontroller

The MIGHTY is an inexpensive circuit for adding light, sound, and motion to any prop. It's like having a light kit, sound chip, and servo controller all in one.

You tell it what to do by putting scripts written in BASIC on the MicroSD card along with the sound effects and music you want to play. And you control it with switches and knobs you attach.

It has a 2 watt amplifier on board, so it puts out sound equivalent to what you'd get out of a pair of desktop PC speakers. The base board can control 48 LEDs, and you can increase that number by adding expansion modules. One expansion module would be enough to allow you to drive all the LEDs on both the inside and outside of the computer gauntlet.

The expansion modules also allow you to control lasers. One module is enough to drive all three lasers for your targeting system.

No module is needed for servo control, so with the board above, a 24 LED expansion module, and a 3V power module for the lasers, you could control everything on your suit including the shoulder mounted cannon from your computer gauntlet.

You also don't need any resistors for the LEDs, so connecting them is as easy as plugging them into a cable and plugging the cable into the board. And, if enough people here are interested, I would also a set of inexpensive 9-segment alphanumeric display modules with the Yautja language, to make it even easier to assemble your gauntlet. (I could offer modules for the orange X and blue grid of LEDs as well.)

Anyway, once again, I hope I'm not breaking the rules by posting about this here. I just thought you guys would be interested in it. Your wrist computers were the original inspiration for this project. I was thinking about making one, and when I realized how complex the circuit would need to be I wondered if there wasn't some way I could make one circuit that could drive any props, so that I wouldn't need to design a new circuit every time I want to build something.
S

Here are some photos of the props I make as well:
http://www.therpf.com/f9/my-ghostbusters-pke-meters-trap-goggles-90889/
U

Selling is not permitted on the main forum, only in the BST section, which you will gain access to after a certain amount of time and post count.

Please feel free to show off the items, and i am sure many people will be interested, but please keep sale talk off the forum.

You are allowed to post if you have a kickstarter though, right?
that's fantastic idea. on circuit board that you can adapt to anything.
wish i wasnt all tarded when it came to electronics.
S

Four days remain in the Kickstarter campaign, and I've already met and exceeded my funding goal! As a result I've added a bunch of new reward levels, one of which includes a whole bunch of stuff to go with the MIGHTY for your computer gauntlets.

The update can be seen here:
http://www.kickstarter.com/projects/shawnswift/the-mightytm-microcontroller/posts

With this new kit, you'll get six of these: 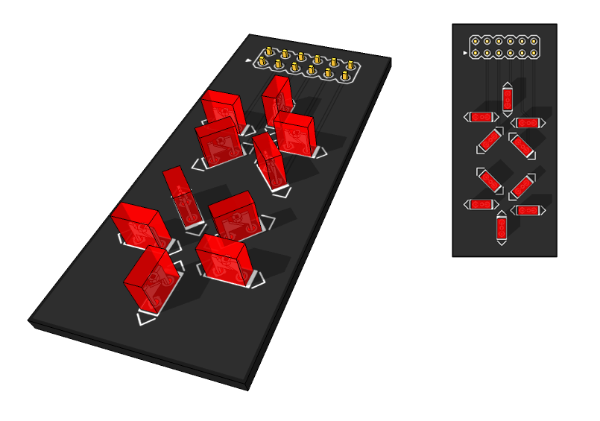 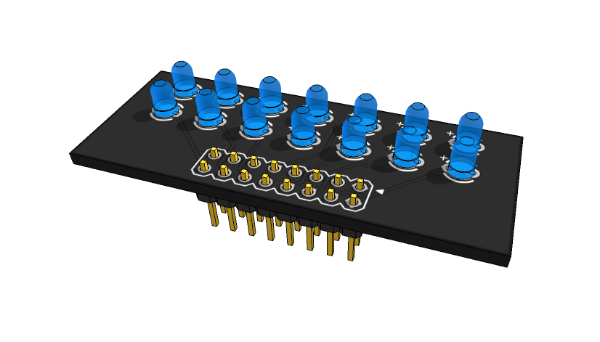 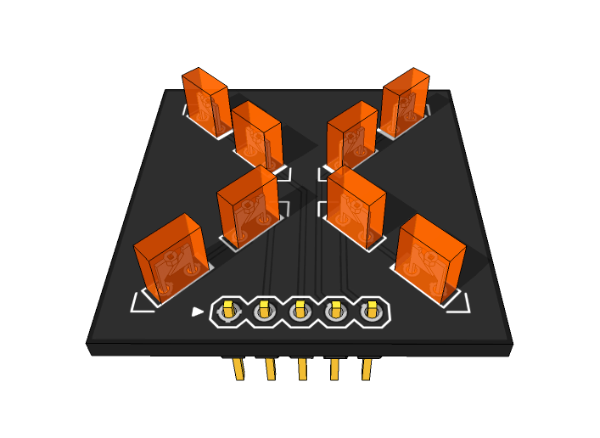 Plus, three red lasers, a speaker, a pushbutton power switch with a rectangular cap about as close as you'll get to the size of the original, a MicroSD with all the code and media to drive it, plus a bunch more LEDs, another LED expansion module (bringing the total number of LEDs that can be driven to 96), and all the connectors you need.

An upgrade to drive your shoulder cannon is in the works as well.
S

Oh, I also wanted to mention that I'm considering adding two more LEDs to those alphanumeric displays, next to the vertical LEDs at the top and bottom. I created the model before I decided to include the second LED expansion module which you need to be able to drive those.

s you can see, that's the gauntlet from the first film. I made that using a screen cap from a video of a screen used gauntlet:
http://www.youtube.com/watch?v=m6As226gvRQ

I used the 9v battery in the video for size reference, scaled the image to match, and calculated the dimensions based on that. I then used those to get my boards as close as possible to movie-accurate.

If you cannot use the switch board with your particular gauntlet, I can provide you with individual switches instead. The board is just to make mounting things easier.
S

Oh one last thing. If anyone knows the actual dimensions of the gauntlet, so I don't have to simply estimate it, that would be good.

sswift said:
Oh one last thing. If anyone knows the actual dimensions of the gauntlet, so I don't have to simply estimate it, that would be good.
Click to expand...

If you can bear with us, we are identifying some of the parts and should be able to scale the gauntlet based on that.
S

Okay. The boards won't be manufactured for a while, so I can update them whenever better measurements are available.

Community Staff
Will probably be a month or so. I am finishing up the bulk of the ID on the backpack and cannon... gauntlet is next. As soon as I have something, I will give you measurements so you can take it from there.

I sent a PM with some questions I like to clear up so when you would find the time please get back to me.

Only one hour left in the campaign, and we're over $16K!
A

sswift is there any news on these. Just curious as I checked your website and it just says not ready

I am working on a arduino solution with oversized 14 segment led displays. Finding the chinese vendor to go with that actually sells a 2 inch display has been the kicker. I am trying to do off the shelf stuff so joe blow can do it himself, longer term. Still all in my head and I will post once I get something notable...

Can we get fritzing files on those items and just get them produced at oshpark.com?
S

Aurellius said:
sswift is there any news on these. Just curious as I checked your website and it just says not ready
Click to expand...

Hey, sorry I never got any email notifications about replies to this post. It was only when KSJ messaged me today that I finally got one.

I never ended up manufacturing this kit because there was insufficient interest and other things had to take priority. But I still have an interest in manufacturing these, and I'm hoping I'll be able to get to it this year. A lot of things have changed since I first announced these and it's now possible to get smaller quantities of boards manufactured for reasonable prices, so even if I'm only going to sell a few of them it can still be viable to do.

I've been watching this thread for a bit now with some crazy interest. I hope you're able to get it sorted out soon...I wanna build this.,
S

I'm actually hoping to release this soon after all. I've been working on it for the last week in between some other projects, and since I had all those displays already designed, and I've released several other boards that do all the stuff I want to do with this kit, the work is progressing quickly. I hope to order some prototypes in the next couple weeks. So around the end of March I should have something to show for my efforts.

I'm working on it!

It's gonna take a bit longer than expected, and I had some other stuff come up that I needed to attend to last month. I hope to be ready to order a prototype in May. I've got a pretty good idea where I'm going with it now.

The plan right now is for the kit to have a 3W mono amplifier that can drive a small 4 ohm speaker, as well as a 3.5mm line out jack so you can play the sound effects through a more powerful amp in your backpack if you wish.

The four display countdown timer will be an optional add-on that will come with a magnetic sensor to trigger the countdown, which you can do by opening the lid or by touching it if you have the magnet inside your glove.

And there will be connectors for powering an optional plasma cannon LED and lasers. Though I haven't yet worked out all the controls yet. I've only got four buttons to work with and a power switch!

That small board over on the left is the power switch btw.

Non-electronic display for the gauntlet computer - interesting or not?