some of you were aware of the following event i was trying really hard to develop for all of us, our very own predator related convention. After my success at the arnold expo and with the push of certain members (Lee AKA: Usurper, Clay AKA:Eaglewood) i was convinced it was a good time to try and hold our very own event.

Celebrate the 25 anniversary release of PREDATOR the world's first predacon. Through the contacts clay had established with the arnold expo i worked very hard on creating a show outline to include a reuniting of the original cast and crew... and had some other members trying to establish connections with some of the cast...thanks lee for your hard work.

over the past few months i joined Facebook with the hopes of connecting with everyone related to the predator franchise, everyone i contacted from Shannon Shea, Steve wang to Briane Steele to the Winston school were on board if it was going to happen.

everything was going smooth until the bad news of arnolds personal life came to light, the same day i was to phone conf with him and the promoters to review the particulars of the event..that happened. i got a call that the sponsors who were going to promote the event had pulled out of the expo... so no predacon..

this past year has been a crazy one 1st with nycc and next the arnold expo, so i was crushed that we came so close to making it happen. i needed to step back and regroup and recharge cause i was burnt out....


so to all who knew and helped thank you for your support we came ******* close. maybe one day it will happen.


here was the poster i designed for the event...it would have a been a blast, imagine 50 suited up hunters, events, cast and crew a screening of the film....ahh man...so close 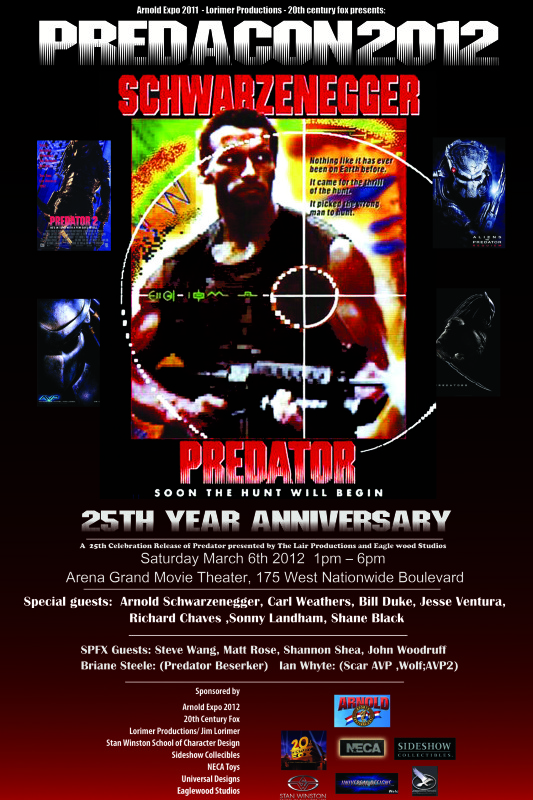 i mean HOW many years ago did you and i speak about a event like that? pie in the sky dreams we thought, the pinacle of the forums journey.

And that s where is stayed until planets aligned/things fell into place, or as some would say , **** APPEND. THEN It was all the more made possible by you guys at NYCC and the Arnold, the connections and reality that this could be done.

A dream that was soooooooo close to fruition we could nearly touch it.


But you kow what, NEVER GIVE IN my friend.

We never thought all those years ago that it could happen, so who its to say something wil not happen in the nar future.

a huge thank you to clay for helping me out , clay without you we wouldn't have come so close.

and to my con partner meangene, without him we wouln'dt have been able to make such an impact on the show promoters

Usurper said:
But you kow what, NEVER GIVE IN my friend.

We never thought all those years ago that it could happen, so who its to say something wil not happen in the nar future.
Click to expand...

Exactly! So the 25th isnt going to turn out...There is always the 30th...and that gives us oodles of prep time! I would think all the negatives will have blown over by then and if we mobilize the whole Lair we will have plenty of people to make it a reality. I volunteer!

I said it before and I'll say it again, a few years back noone knew about the Lair, now we have Fox, actors, painters, crew members, for God sake, even Stan Winston Studios know about us and have us in mind for future projects. I think this Arnold drama will be over sooner or later once they find somebody else cheating on their wife. I really believe that PREDACON is GONNA happen, we are a month away from SDCC and a few months for NYCC, trust me guys this people want to see US..
A lot of doors are now open for us, from time to time one or two might close but there, is when we have to jump in thru a window and don't let this small things hold us back..

i'll post up the show outline for everyone to see.

one cool item we were going to have was Davidyr1 was going to produce a special predator related leather jacket or suit to be signed and auctioned off with proceeds to be donated to the fallen heros fund.

I say we show up in record numbers anyway. Show the promoters we are still die hard and willing to do it in further years.

It came close, it is hard to get SO CLOSE and then have the floor drop out. I don't think anyone can understand how close Andrew came to this. It went all the way to the top.

But like everyone keeps saying, never know what the future holds. Its a lame saying, but it is the damn truth!

agreed ,,,you never know what the future holds.

Brotha I full support this effort, don't give up, I will be there and the Arizona Team we will find a way to be there for this WHEN it happens full suited and ready!

fuckin wish i could make DC grrrr. i need a break.
C

I kinda figured that's what happened. I am so disappointed, and at the same time pissed off. First Arnold, then Anthony Weiner - the latest entries on a long list. Why is it that celebrities and public figures think they can engage in salacious behavior and think it won't have any effect on themselves or other people on down the line? I'm no prude, and I know celebrities are people too, but for chrissake! Andy, keep the faith. Maybe in 5 years we can try again. At least my backpack should be done by then!

if the backpack is done by then...it will be a celebration!!!

truth be told, i lost my faith and needed a break, but i'm slowly coming back.

Andrew and I had a hard time keeping this close to the chest for sure. The conversations were to the point as he said, of a conference call with Arnold himself. Everyone was on board and ready to roll--
But things happen.
And you know what-- not worried at it in the slightest. We have the talent and ability here on the Lair and the people involved not just here in the US-- but freaking worldwide!!! We can make an even happen that would be so great that the promoters and sponsors would be begging us to let them help.

The groundwork is laid-- lets just continue to build!!!!

Sorry it fell through for you Andrew despite all your hard work. Enjoy your breather. "Maybe one day" indeed. It could happen. Don't give up.

I got to start conning my mom to let me go now!

ha ..I was thinking ..even though Arnie has his scandal ...we Kinda forget that the Director is in Prison too ...wow! Technically, he would be the most important piece of this films legacy.

But when it comes to it ...this is really about the fans ..and the Creature ..the pred is really the mainstay in the franchise. Perhaps when we are re-enrgized, new plans can be made ..even if its not on as grand of a scale as what was originally planned, something can be done to honer the anniversary

Is Mctierman still in prison George!?
I thought he only got 4months? did he get charged again? or is this to an unrelated matter?
Lem

after the initial wiretaping case, he was sentenced to a year in July 2010 for lying to Feds and Pergury ..He was in appeals ..but I think he is still in Prison ..havent heard otherwise

wow! thanks for the info,George. I was not aware of that.

ptgreek said:
after the initial wiretaping case, he was sentenced to a year in July 2010 for lying to Feds and Pergury ..He was in appeals ..but I think he is still in Prison ..havent heard otherwise
Click to expand...

FastBurst said:
Brotha I full support this effort, don't give up, I will be there and the Arizona Team we will find a way to be there for this WHEN it happens full suited and ready!
-James
Click to expand...

Exactly James I know I will have my suit done and ready to rock by the 30th Anniversary. Everything happens for a reason as the saying goes Andrew you are a hard worker and it shows in the Lair as your passion for the PREDATOR when everything goes down south you will always be the one to help us as members to move forward with our builds. Just as mush as you are here for us we are here for you as well buddy
You must log in or register to reply here.
Share:
Facebook Twitter Reddit Pinterest Tumblr WhatsApp Email Link
Top