Pepsi in Back to the Future

In an effort to help with my collection, I went through the movie to count how many Pepsi Products I could find throughout the first BTTF I haven't gotten to the second and third one yet... Some of these were in really interesting spots! Some are so blurry they may not be identifiable.
A total of 23 different Pepsi Products plus the two Mountain Dew placements...
Heres my list:
1 Mountain Dew Can 1980s front windshield of Biffs Auto Detailing truck
1 Mountain Dew Cap Jeep Driver
1 Pepsi Clock in Docs Clock Collection
1 Pepsi Truck behind Budweiser truck during first skateboard scene
1 Diet Pepsi Free Can 1980s held by the band going after the Pinheads
1 Pepsi Cola Can 1980s on amp by the band going after the Pinheads
2 Diet Pepsi Cans 1980s (different cans) on dinner table
1 Diet Pepsi Free can behind Marty’s bed
1 Early Pepsi Cola Display behind Lou
1 Early Pepsi Product to the left of Lou at Cafe
1 Have a Pepsi Thermometer at Lous Cafe
1 Pepsi Cola Bottle 1950s at Baines dinner
1 Pepsi Cola Bottle 1950s by Marty at Texaco
1 Blue Pepsi Cola Cooler 1950s at Texaco
4 Empty Bottles 1950s at Texaco
1 Large Tin Pepsi Cola Sign at Texaco
1 Pepsi Cola Sign above door at Lous Cafe
1 Blurry Pepsi Sign in background at Lous Cafe
1 Paper Pepsi Cola Pinup Girl Docs Lab
1 Buy Pepsi Cola Crate at the dance on stage
1 Empty Pepsi Bottle in the back of the Starlighters Cadillac

I just posted the rest of the screen captures. I am really intrigued about what the blue ceramic pepsi cola product is...

RPF PREMIUM MEMBER
It's a dispenser: 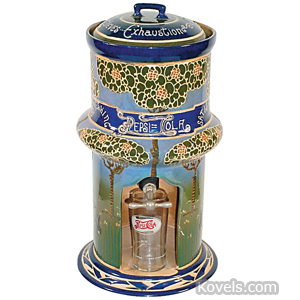 I just posted the rest of the screen captures. I am really intrigued about what the blue ceramic pepsi cola product is...
Click to expand...

That ceramic piece is a syrup dispenser. Most old soda fountains didn't have bottled soda or soda "on tap". They mixed the flavor.
So the soda companies would deliver syrup to the business and the soda jerk would fill a measured amount of syrup and then carbonated soda water.
Each brand had their own syrup containers that were also a form of advertising at each malt shop/soda fountain/ice cream parlor.
F

Well, that was a quick answer! Thanks to the both of you!

There's actually a Coca Cola advertisement somewhere in the 50's, but it is really difficult to see

Yes, another Back to the Future collection

Back To The Future 3 - Doc Brown's Notebook

My “Back To The Future” Wall Display

Back to the Future Time Circuits