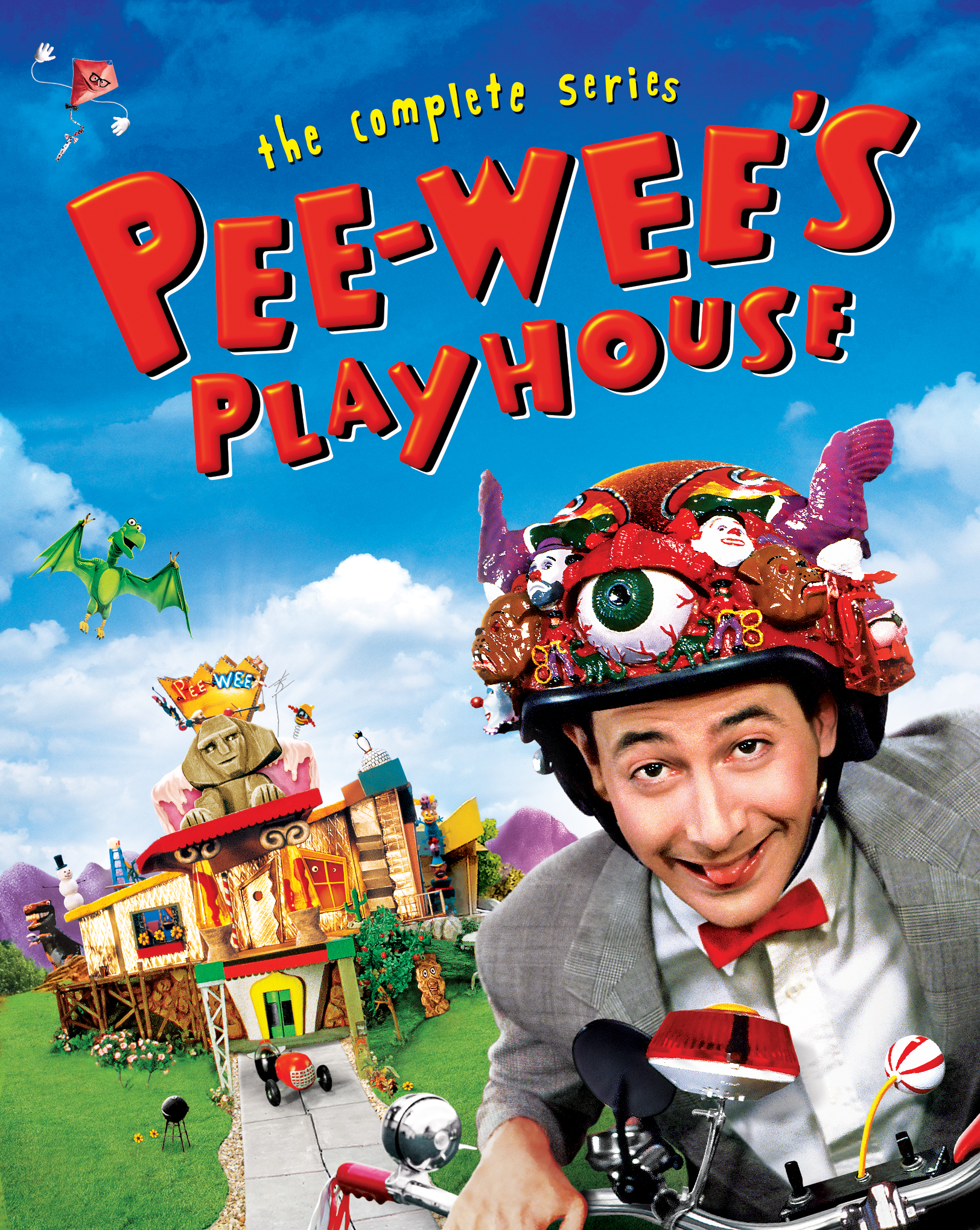 I love that you're keeping this thread alive! I started piecing the scooter together a few years back. Also could never identify that indian on the helmet. 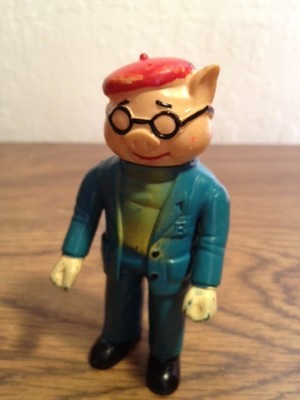 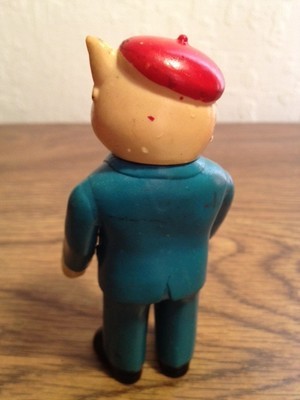 A couple more pics of the pig on the side of the helmet.

RPF PREMIUM MEMBER
I still think that this character is somehow connected to Osamu Tezuka. Like its a parody character of the cartoonist found in another piece of animation. So weird. 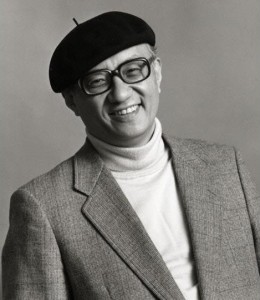 PeeWeeFan said:
My current pile of parts for an eventual scooter helmet build.

If anyone needs any flame stickers, let me know. I had to buy 24 of the things!
Click to expand...

I would love a couple sets!!

RoweJK said:
I would love a couple sets!!
Click to expand...

Just hope he still has them 4 years later.

A couple more pics of the pig on the side of the helmet.
Click to expand...

I am thinking of 3D modeling the scooter body and then printing it. After a lot of searching, I am not confident the actual body will be identified.

We had observed the three wheels on Pee-Wee's scooter a few years ago, but I just had some new thoughts about it. Those extra wheels are definitely training wheels, and the body is perfectly suited to housing those training wheels (see nick's pic of the scooter from the front view; I've attached a copy for convenience). So I'm thinking the body or "shell" is from a child's scooter, or an add-on for a scooter....it could even be an add-on specifically designed for the bmx mongoose (this would be the simplest answer). I'm thinking those training wheels are possibly built into the body itself, but at the very least it appears that the body was made to house training wheels. I doubt they fabricated those parts that stick out on the sides to house the training wheels.
One of my theories is that the body is designed to make it look like a "real" motorized scooter so kids would think it's "totally radical". The shape is very 1950s/60s inspired. The fins make it look super fast and young children love that sort of thing.
My other theory is that the body could be from a REAL motorized scooter. Evidence of this is where the flag sticks out of it. It looks like it could have originally been a seat that they removed and stuck a flag in its place. Usually, a bike style seat would slide into the hollow of the pipe which is part of the frame (or in this case, maybe the body). That empty pipe would just be extra work to saw through, so instead of sawing through it, they may have just opted to stick a flag in it and call it a day. I mean, that "pole" looks to be in a dangerous position when you think about it from a manufacturer's point of view. A kid could easily fall on it and get their butt impailed on that pipe if they were ever to successfully remove the flag or if it were to ever break off. We could be looking at the shell of a real motorized scooter or an add-on that provides training wheels and makes a kid's scooter look like a totally awesome, street worthy, super fast motorized scooter. vrooOOOOOoom

I'm really thinking the body is from a motor scooter, and they've mounted it onto a bmx mongoose scooter.
Here's a chart where I compare Pee-Wee's scooter parts to that of two other scooters. 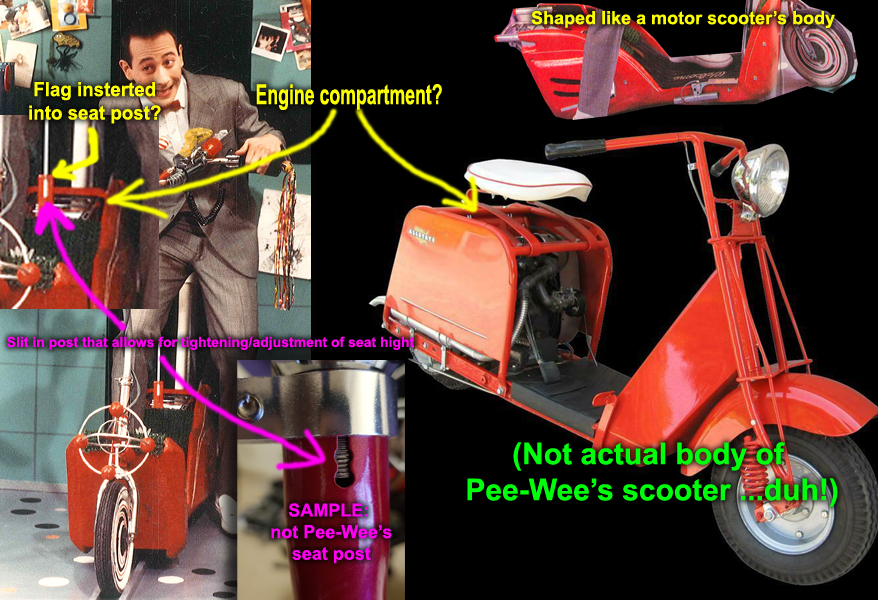 It seems the training wheels(?) are only in that one photo. The scooter seems to have been through at least a couple of slight modifications throughout the series, as mentioned in an earlier post. These training wheels(?) seem to be one of those things that must have been modified. It looks like they removed them and added a kick stand at some point (or the other way around).

Alternatively, it might not be training wheels at all. Maybe it's just part of the "launch" mechanism that pushes his scooter out of the wall, and whoever photoshopped / cut out the image mistakenly thought it was part of the scooter (this seems to be the most likely answer to me). If you look at the second photo, you will see what appears to be the "launching mechanism", which looks a hell of a lot like what I originally thought to be training wheels in the other image. So I really think that's all it is in that photo (not training wheels).

Here are some more pics of the scooter. Hopefully these are new to this thread (I don't recall seeing them before).

Note: the flag doesn't seem to be in a seat post as I had previously thought. It might actually be native to the body or just a regular old add on.

Also, in the second photo, you are able to see the back tire of the bmx mongoose(?) through the body. What's the significance? I DON'T KNOW!
Actually, it could mean that the mongoose is too short to stretch the entire length of the body. And that would mean the body was not manufactured for the mongoose.
Which brings us to my next observation.

These pics are high enough quality I can clearly see that those black horizontal lines on the side of the body of the scooter are actually slits/holes. Which leads me to believe it might well be a motor scooter body after all. The slits being for cooling the engine by drawing air in / allowing heat to escape. 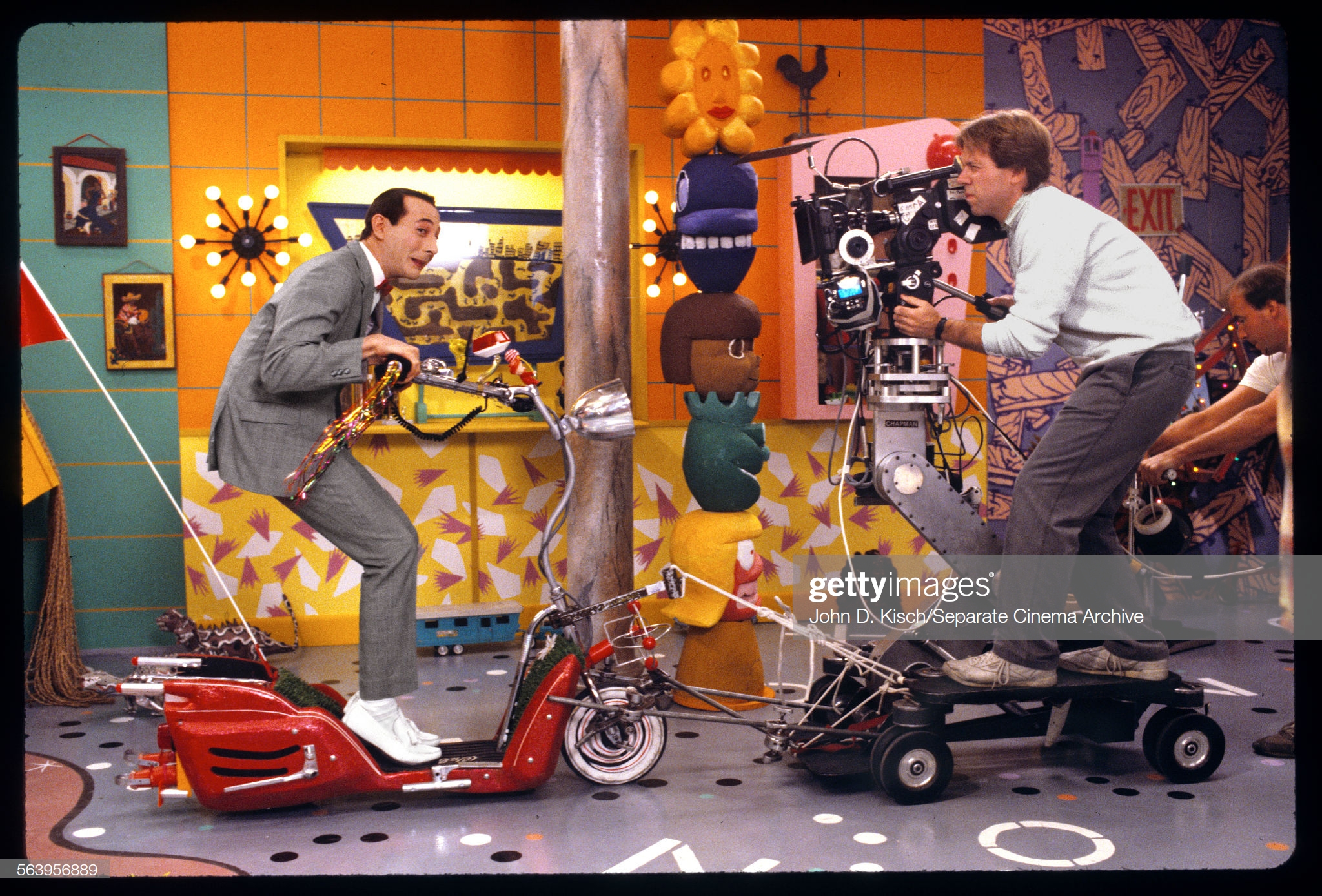 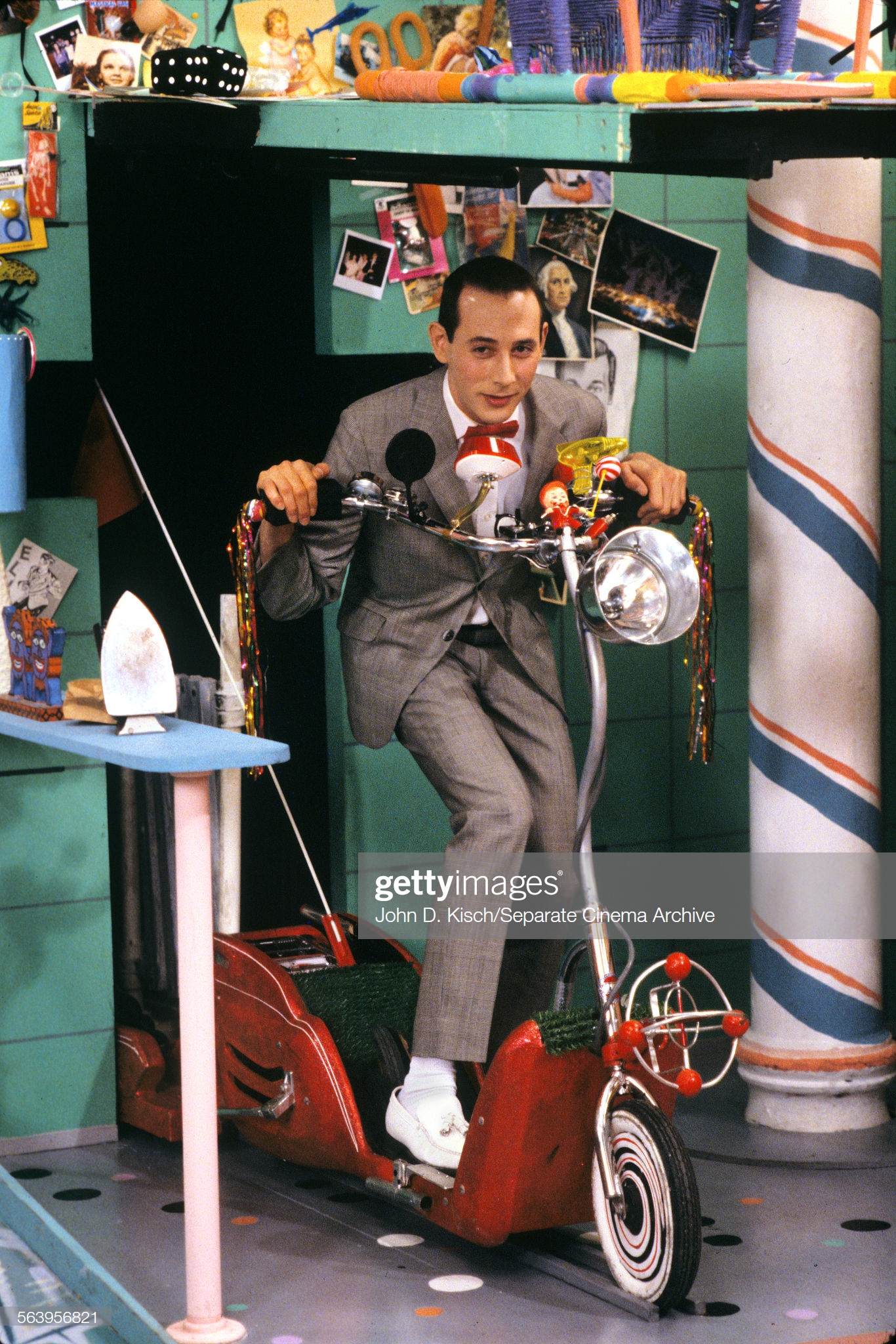 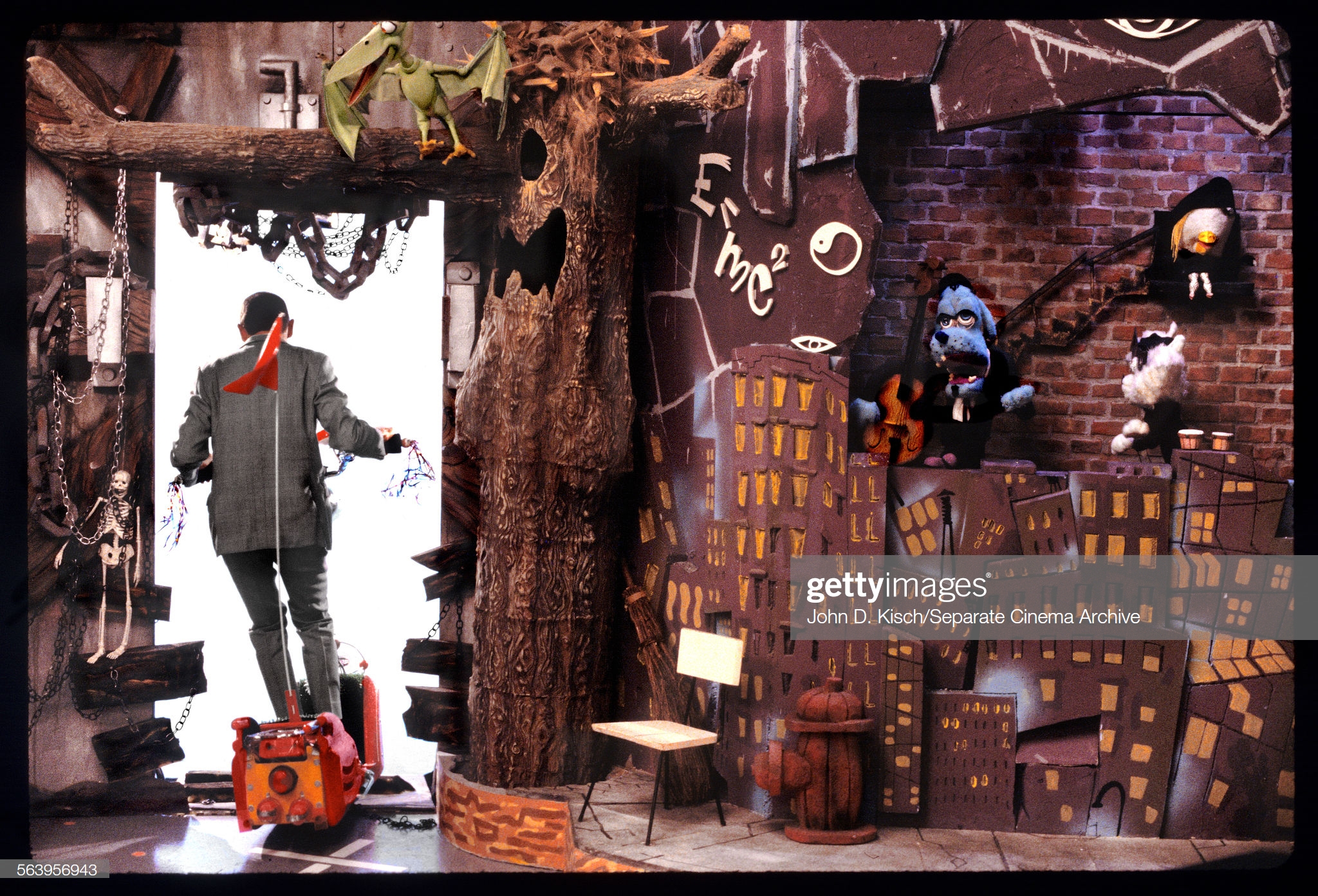 I think the flag likely didn't come with the body. It appears to be attached via a regular old flag mount, similar to these. But maybe a flag mount designed for a boat or a bike would have the correct angle? Just a thought. 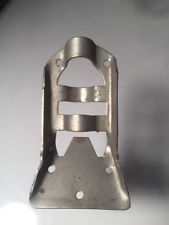 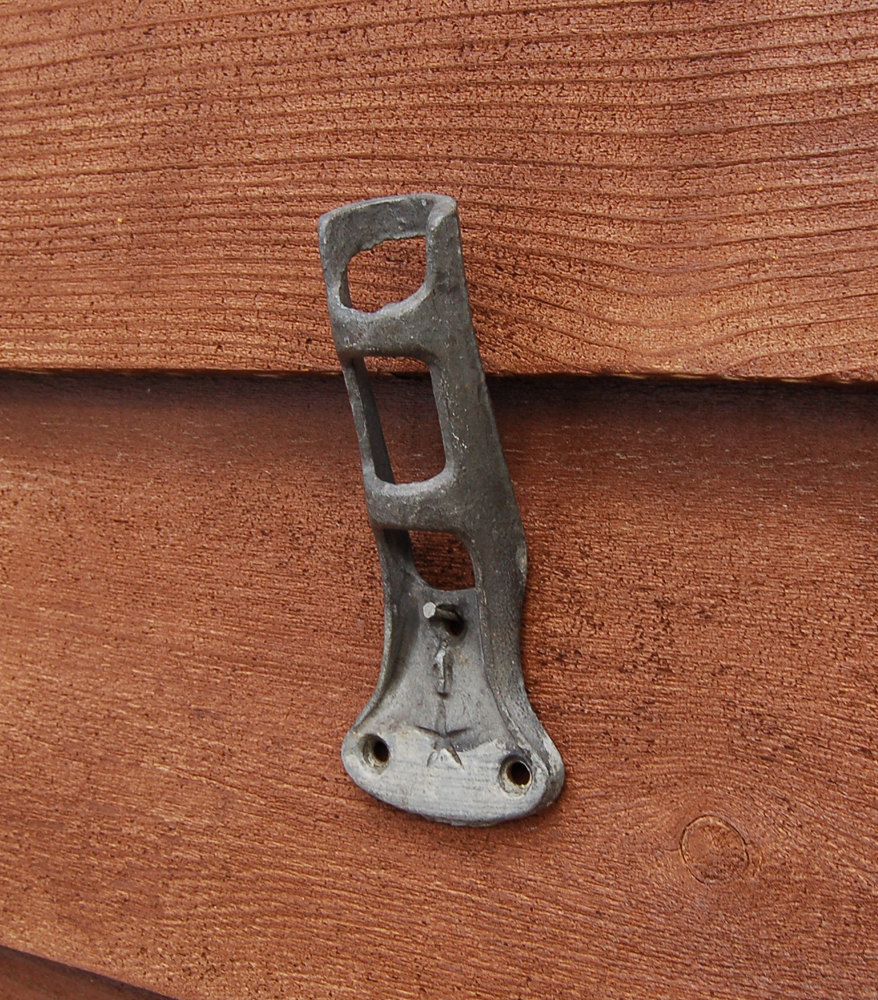 nick daring said:
I still think that this character is somehow connected to Osamu Tezuka. Like its a parody character of the cartoonist found in another piece of animation. So weird.

I sent a pic of the man pig toy to a friend of mine in Japan. I did not make any suggestions about what it might be. She said the same thing you did; that it reminds her of Osamu Tezuka. 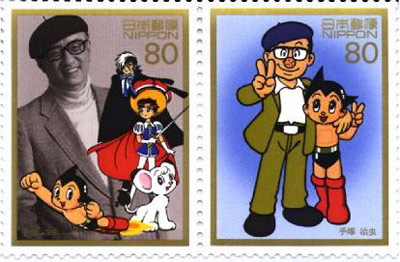 Using my very limited Japanese language abilities, I've done some searches for our pig man, based upon the limited information on the website where the pig man toy was originally posted. One of those searches resulted in this:
View attachment 1071054
I wonder if there was a Pigs Team.
Because those monkeys were made by Bullmark; the same manufacturer that made our pig man toy.

[EDIT]
This may not be related in any way other than the fact that it seems to have been made by the same manufacturer, possibly during the same decade judging by the look of the toys. It looks like the monkey's arms might be articulated, but the original pig man auction says the only part that is articulated is the head. I still need to find more information on this Team Monkey thing. Here's another monkey. Its head doesn't appear to move, but its arms look like they do. Just thought it might be worth noting. Maybe it will somehow provide clues to our pig man.

Hello guys, Gonzo here...sorry if I break any rules for my first post but I think I can help.

I worked in a bike shop through the late 80's and early 90's and I'm 99% sure I have the answer for what base scooter you're looking for. Judging by the frame, front fork, to.e period and even the platform angles....the base scooter should be a late 80's Schwinn YO! Deluxe. You could easily add training wheels to them or a solid axle. Not sure if y'all had that I'd yet but I just wanted to help. 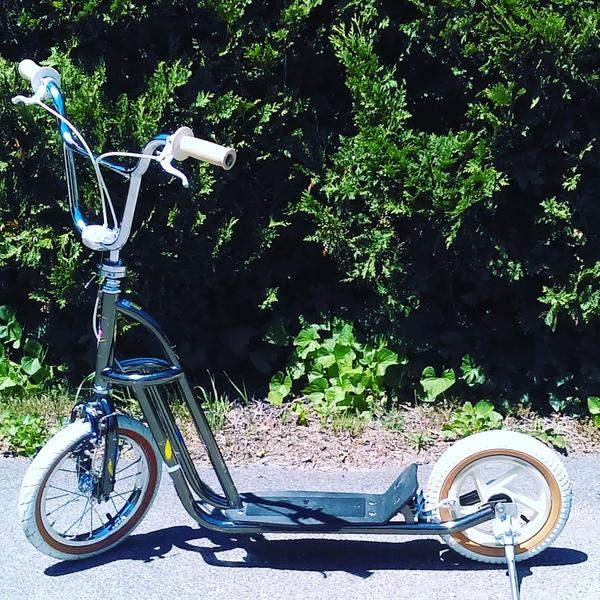 Does anyone have any idea what is on the back of the helmet? Maybe a rear bicycle light of some sort? 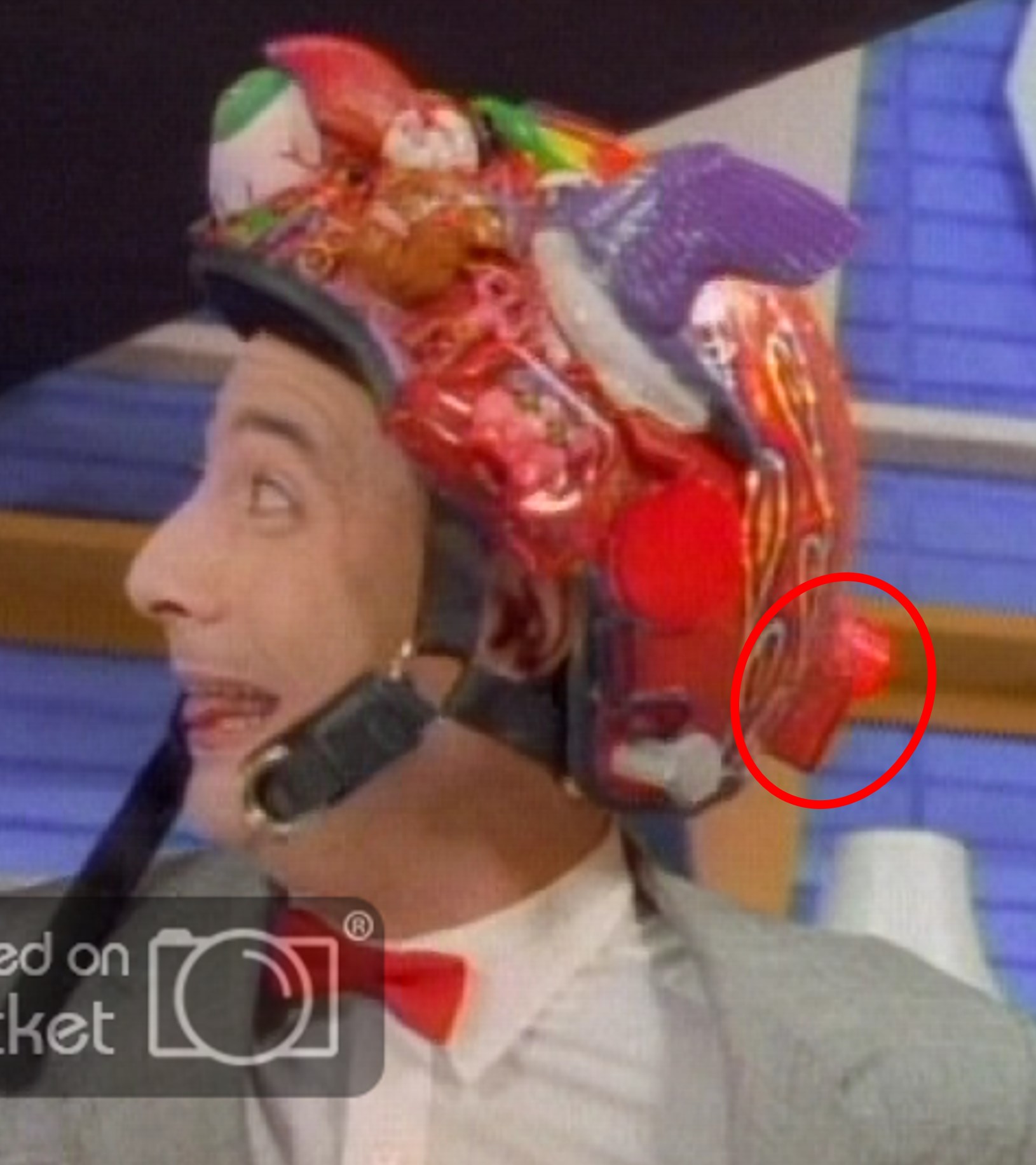 Yesterday at 6:00 AM
the DOCTOR