RPF PREMIUM MEMBER
This is a build that I did a few years back but I documented a decent amount of the build so I thought I'd share the build with all of you. I'm currently in the process of making a v2 helmet so I'll be sure to start a thread on that one as well!

So lets rewind the clock to February 25th, 2015, I was really into the game Payday 2 at the time and on this day they announced they'd be adding a new "Heister" from another one of my favorite games Hotline Miami. This character was the main protagonist in the first Hotline Miami game and up until this point we only saw him as a 16 bit overhead sprite, so I was pretty excited to see him as a fully rendered 3D character! 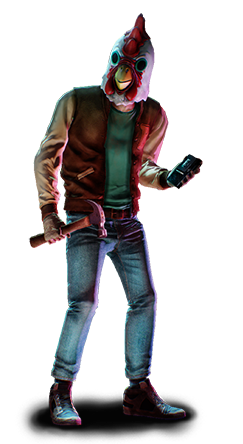 Above is how his character appears in Payday 2

So after this I spent close to a year just thinking of how I was going to go about making his helmet, I initially thought about making a model that I could turn into a Pepakura file as that's what I was most familiar working with at the time, but I decided it was time to delve into the world of 3D printing to tackle this project. After a bit of saving I picked up an Ultimaker 2+ in the summer of 2016 and started down the long road of building this thing!

I had created a 3D model using a cleaned up version of the in-game files and started printing the FIRST helmet (keep first in mind), The build platform on the Ultimaker 2+ isn't exactly the largest so I had to cut the model up into a fair amount of pieces in order to print it all but after about a week I had half of my helmet. Unfortunately I didn't document the process of this first print so I only have a few images of it. 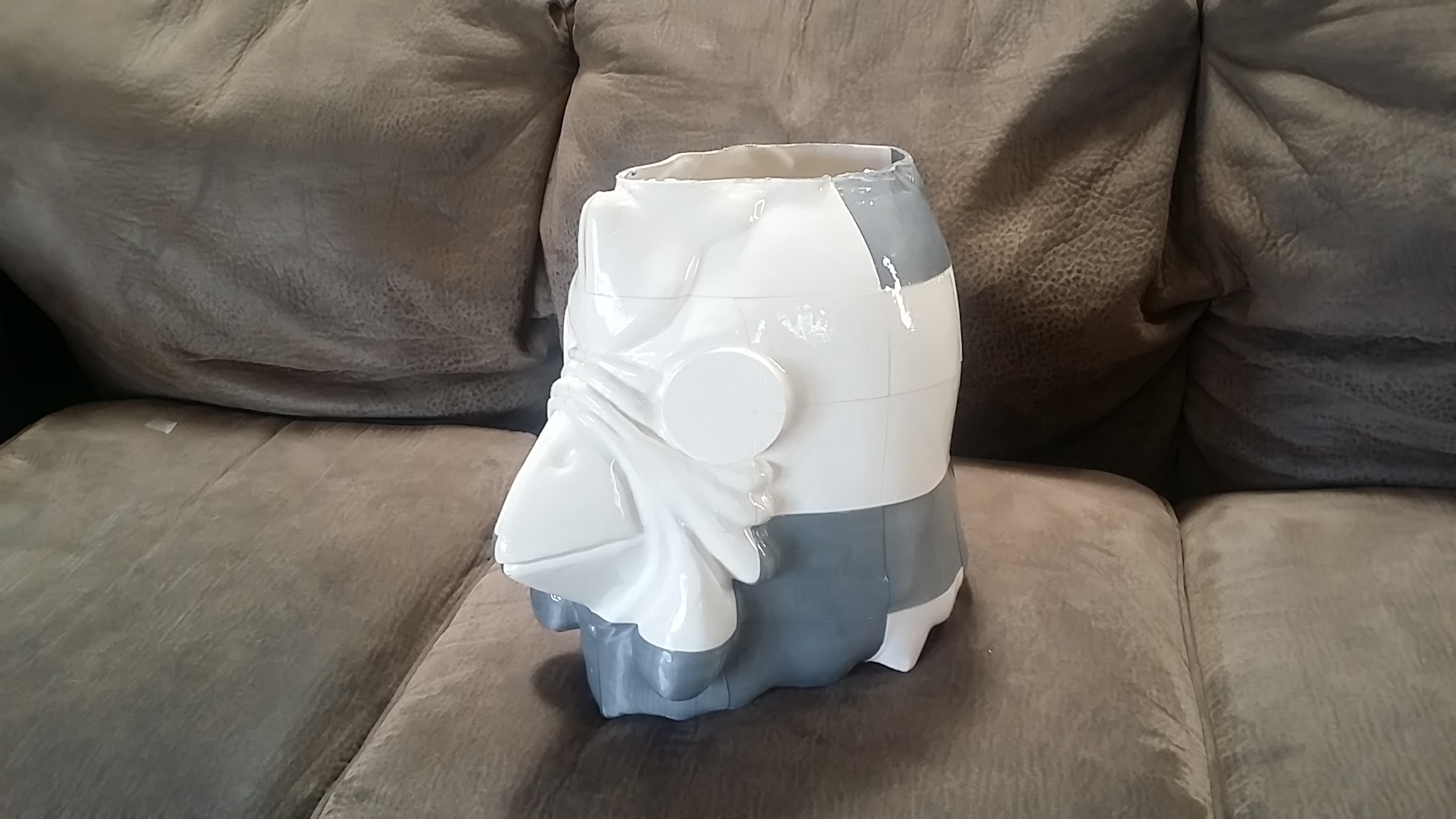 You may be asking yourself "where's the top?" well I decided to start gluing the pieces together and quickly realized this thing was absolutely MASSIVE, I mean it would've looked big on someone like Shaq's head. Somewhere I must've input a wrong number while scaling the model and it was just stupidly big.
So I went back and started printing a SECOND helmet, hoping this time I got the scale right. After a few hours into printing this new helmet I noticed my printer was skipping layers due to a faulty bearing in the z axis 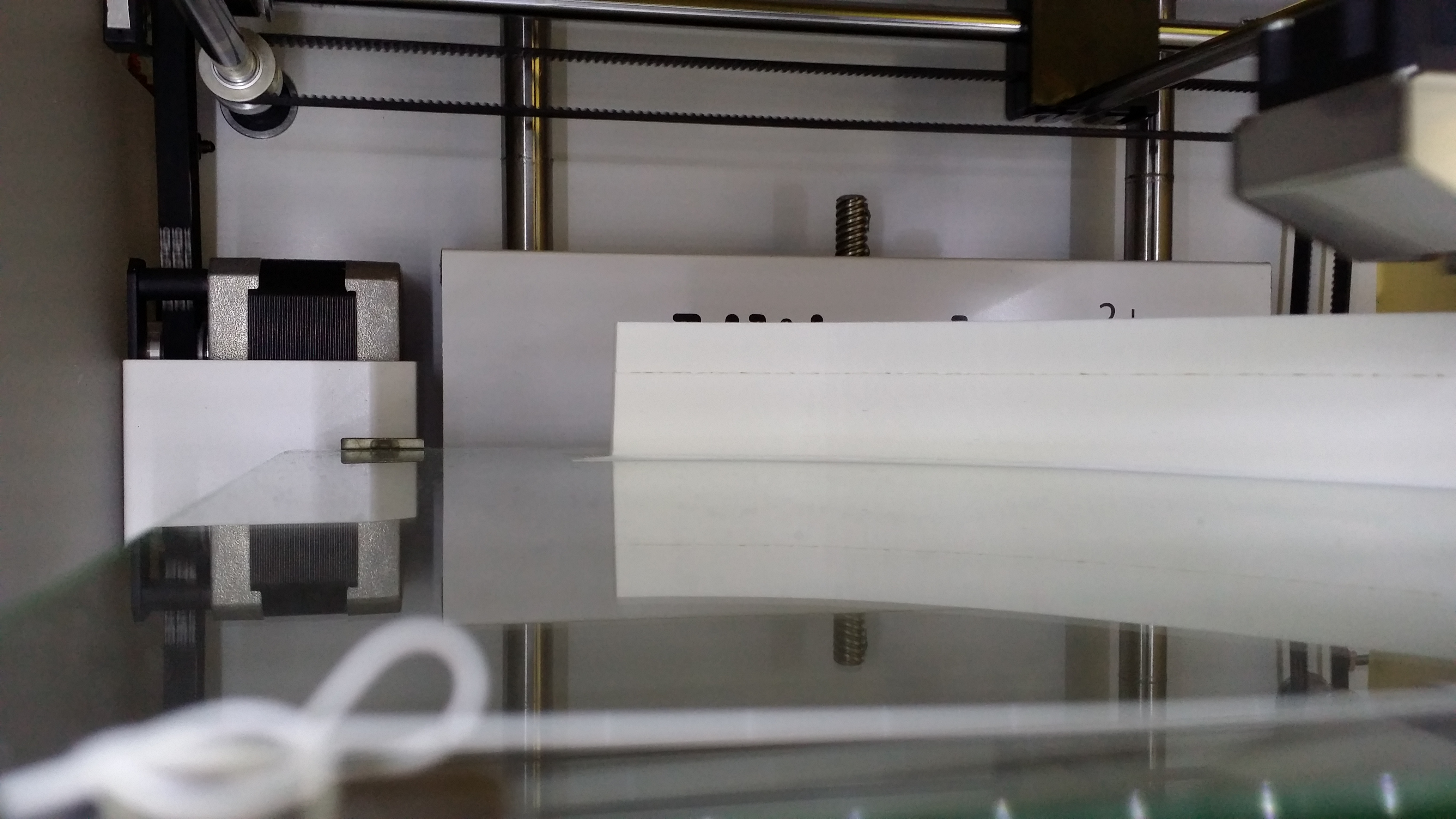 Above is a slightly poor quality image of the layer skipping but you get the idea...

At this point I was pretty frustrated, my new $3,000+ 3D printer wasn't working properly and needed repairs and the convention I had planned on debuting this helmet at was just around the corner, I decided to put it on the back burner until after the con and after I receive the parts for the repair.
Last edited: Feb 9, 2021

RPF PREMIUM MEMBER
How long did project sit on the back burner for? well, close to another year...

In the fall of 2017 I started it back up with repaired printer and properly scaled model, so I began printing the pieces for the third and final time!
After a week and a half of printing I finally had a base helmet I could start working on!

I began coating each piece in XTC-3D to remove the print lines. luckily the Ultimaker does a decent job of printing so the lines weren't too big a deal. 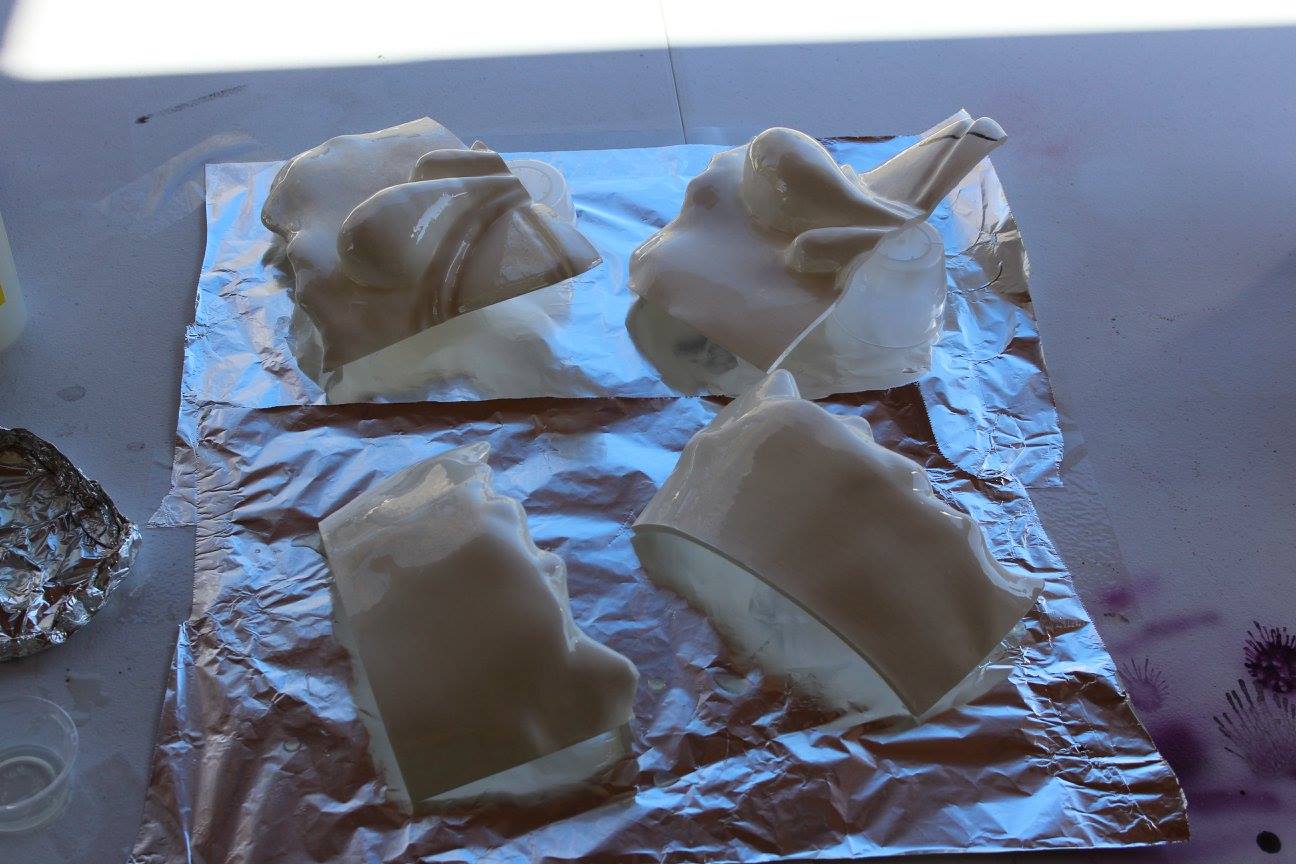 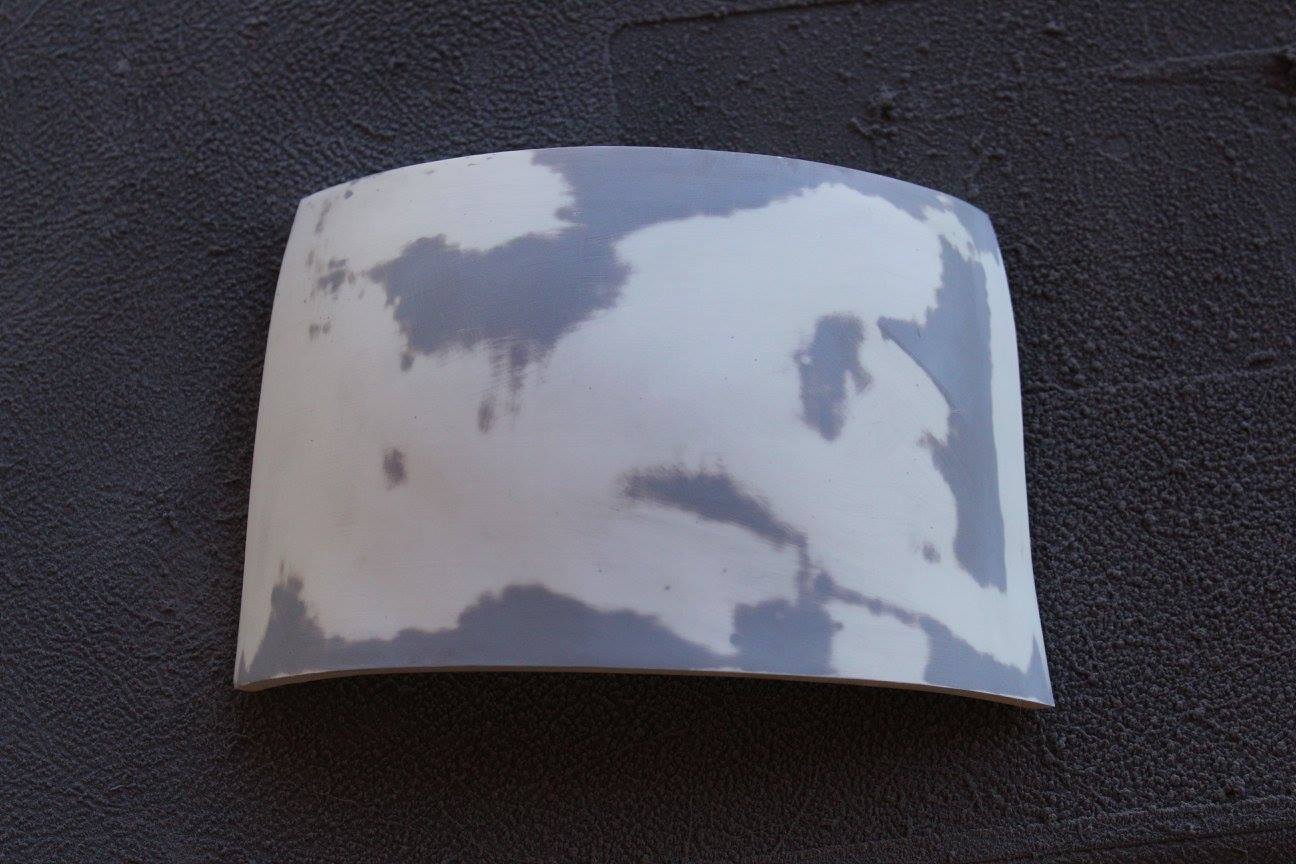 It took a few days worth of sanding but I got all the pieces smoothed and ready to be glued together with CA glue. I was happy with the helmet so far and was glad the seams weren't terrible, so covering them up wouldn't be as big of a chore. 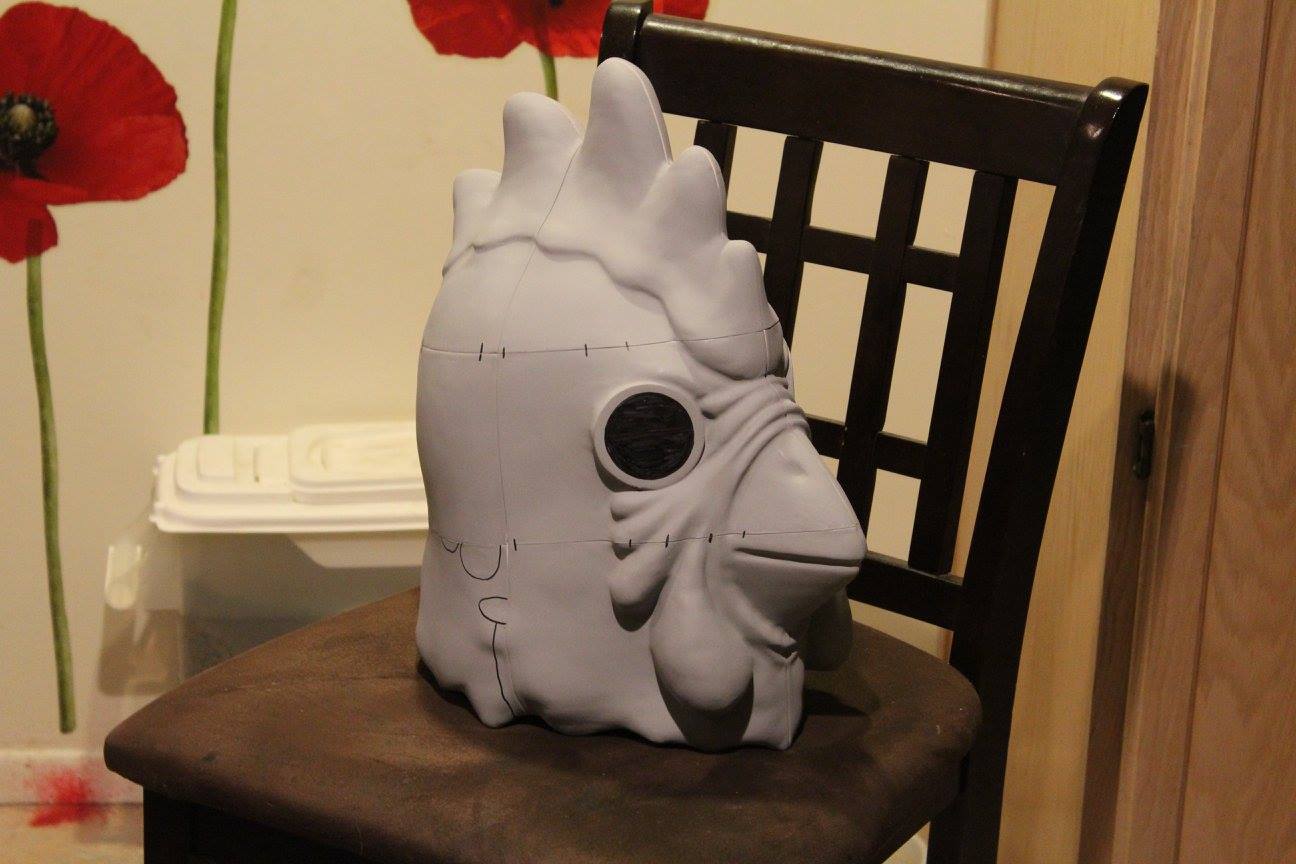 The seam covering at the time went well but looking back at how I used the bondo makes me cringe a little but it did the job nonetheless!

Here he was after 2 weeks of on and off sanding and priming and I was so excited to finally see it all start coming together! 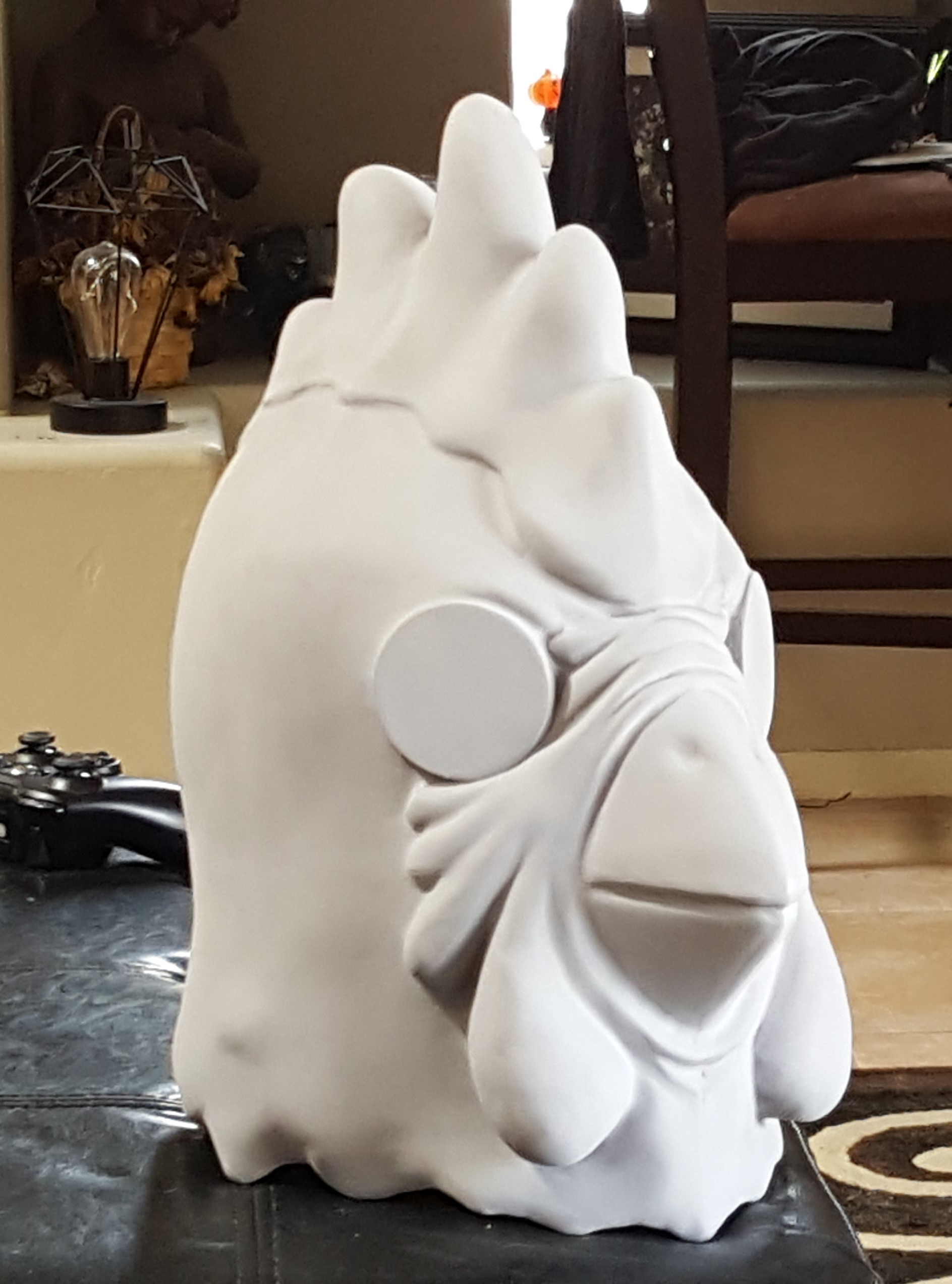 RPF PREMIUM MEMBER
After all the seams where covered, I brainstormed some ideas on how to replicate the texturing on the comb and wattles. I started playing around with hammered spray paint on a scrap print to get a sort of dimpled texture, I wanted to keep it subtle but still have a visual texture difference. 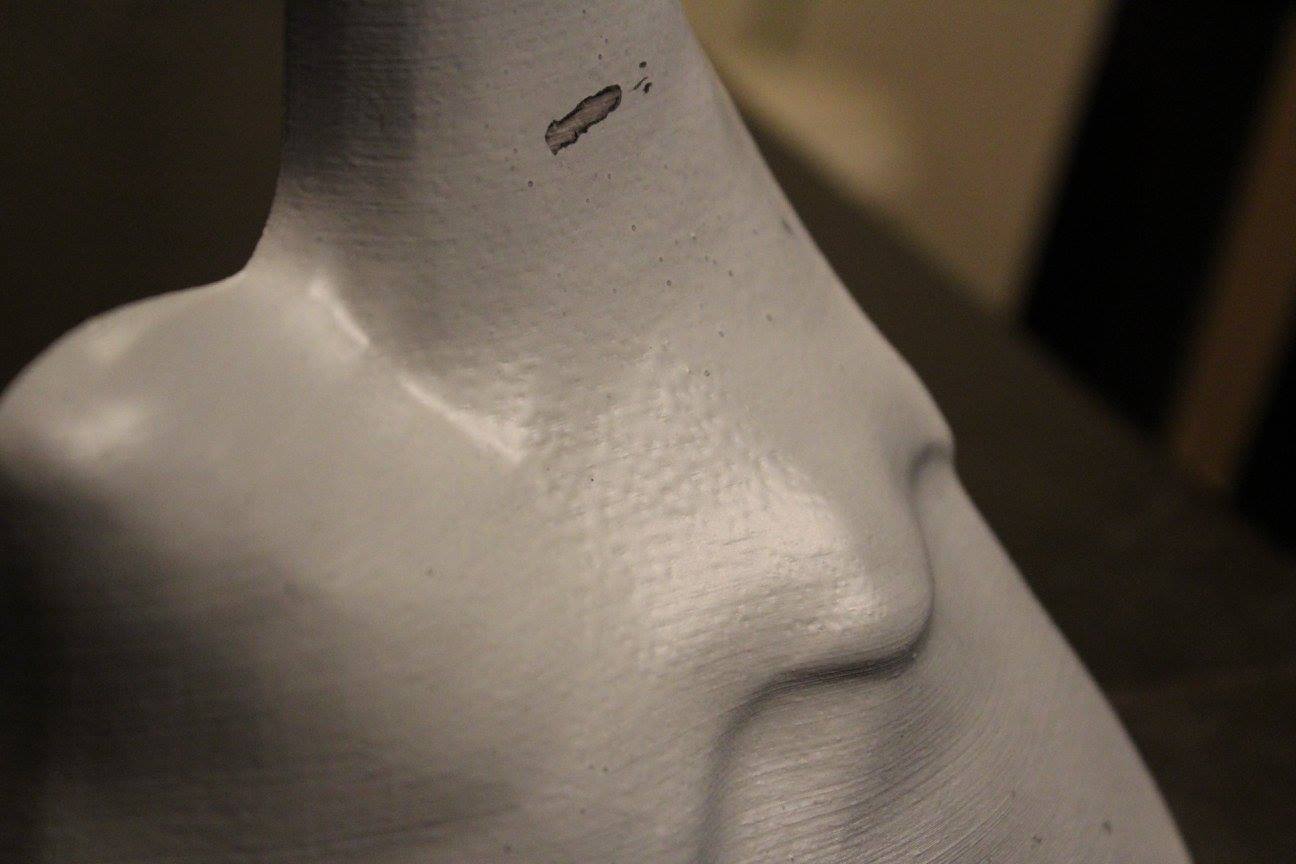 I was happy with the results so I taped of the wattles and comb on the helmet and sprayed away! 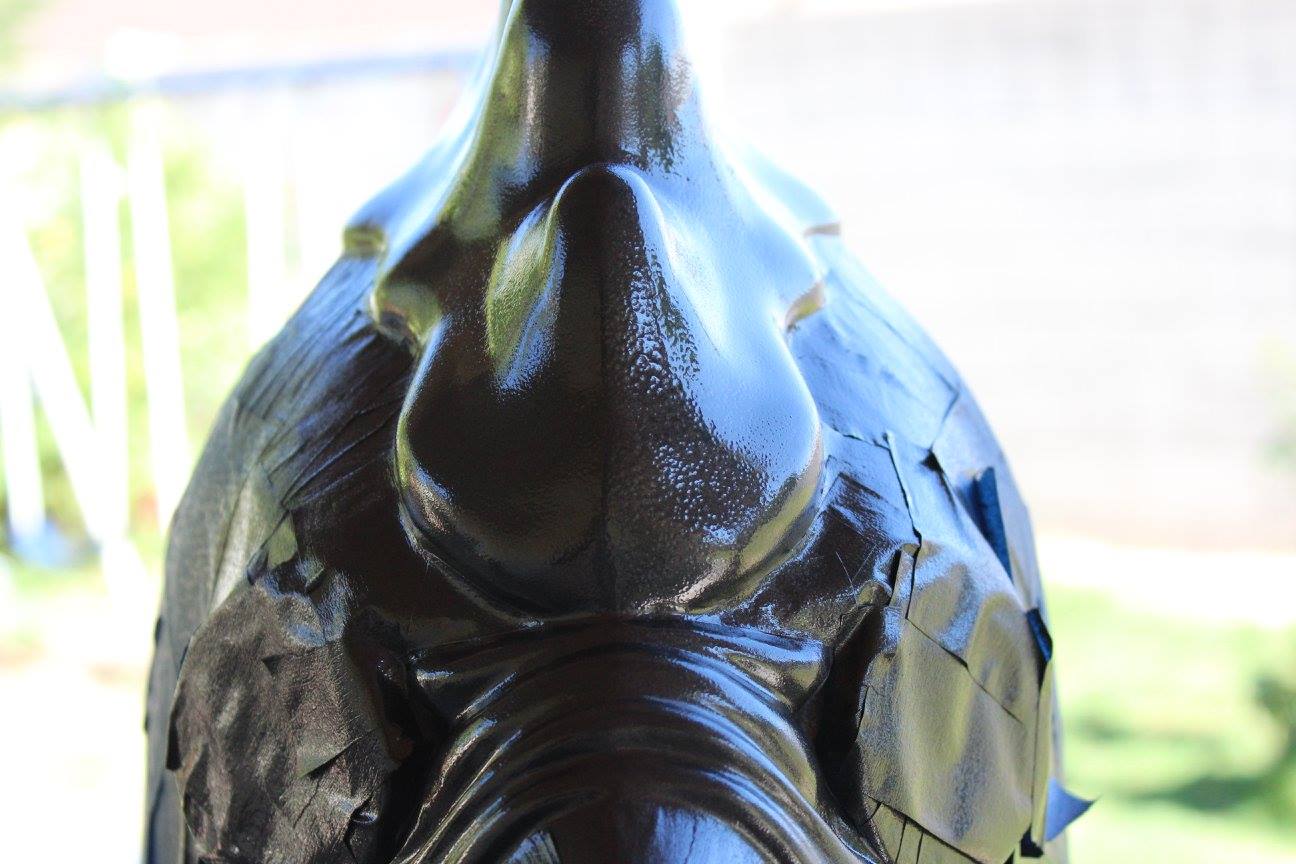 I ended up doing two coats of hammered paint, waiting a few hours between the coats to make sure the paint would properly texture. On the second coat of paint I waited about 15 minutes and removed the masking tape while the paint was still somewhat tacky as I didn't want to run the risk of the paint chipping when I removed the tape.

Now that I had the Helmet textured I had to figure out how I was going to replicate the fake mesh in the "eyes" of the helmet. I quickly modeled up a circular puck with a screen texture inside of it. I wish I had my resin printer back when I was doing this project because it could've handled the screen texture a little better. 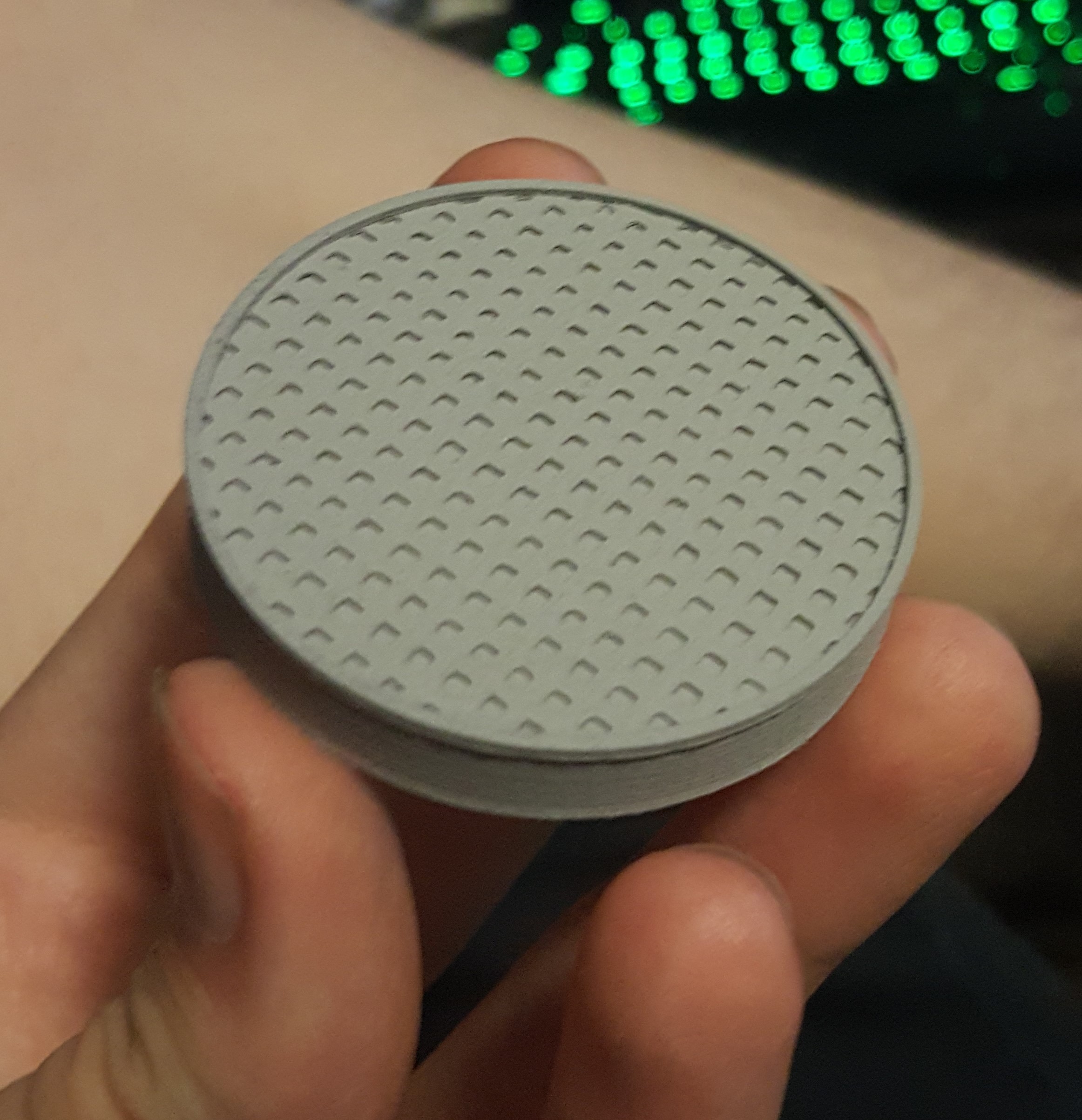 I dremeled out some holes in the eyes and set the pucks inside and glued them in with some epoxy. Even without filing in the seams I was already happy with how the effect looked! 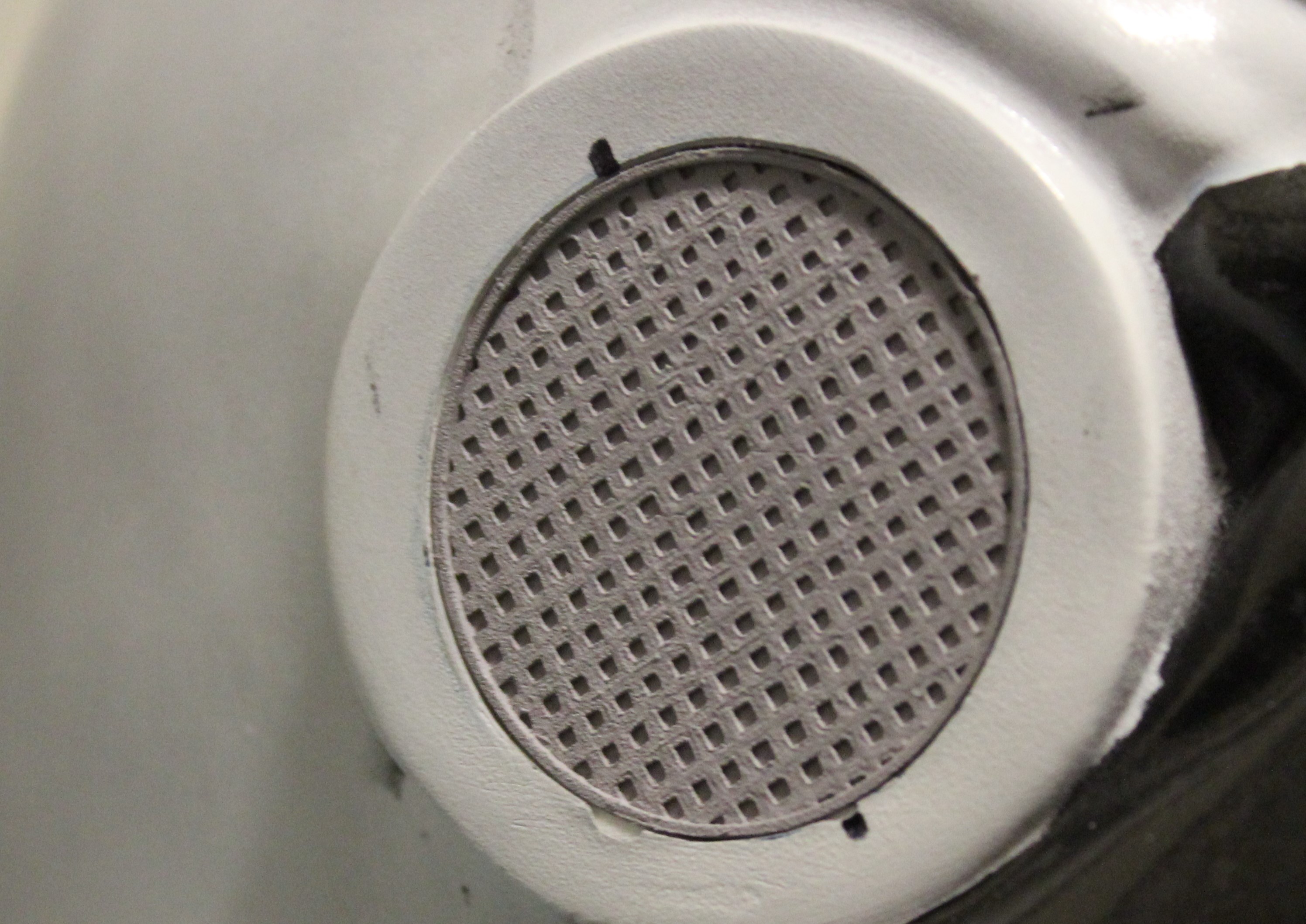 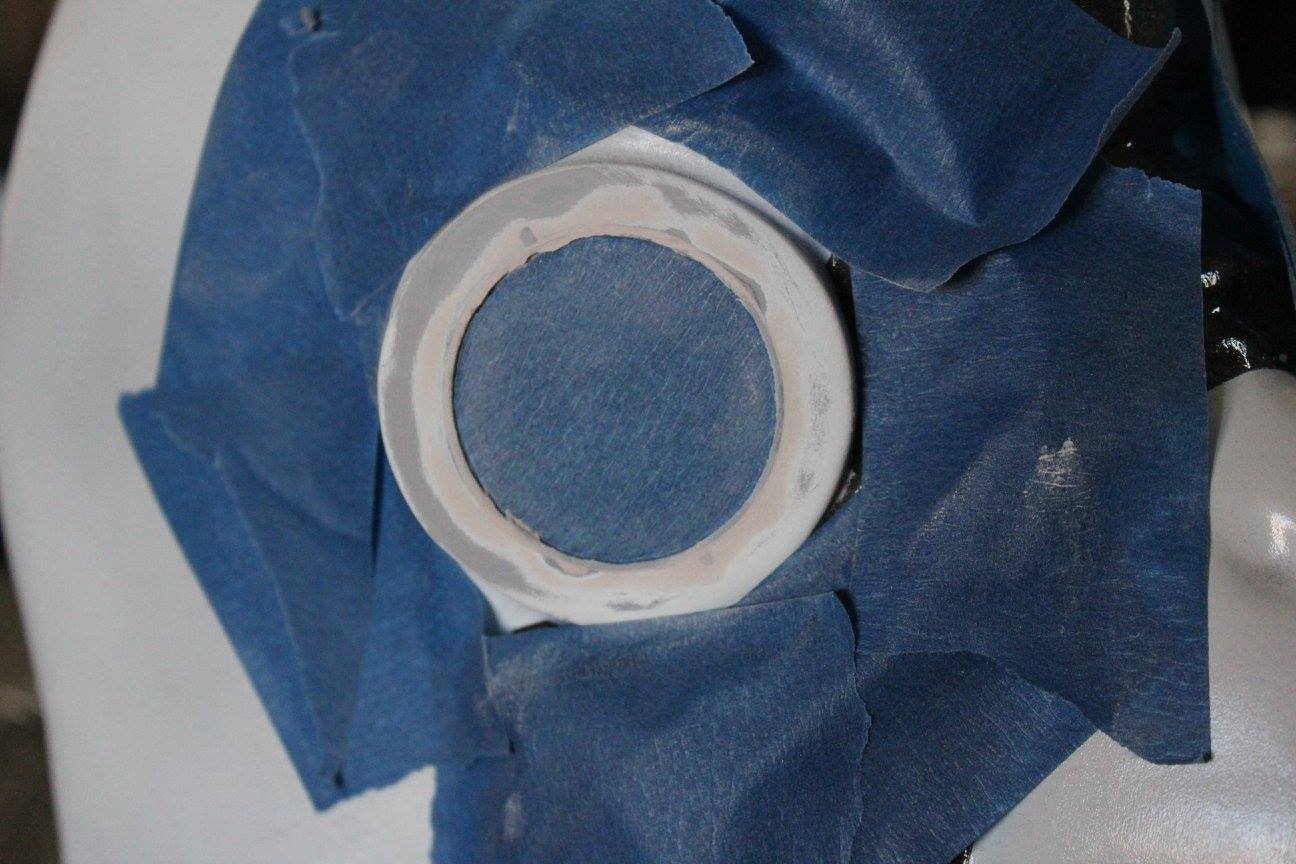 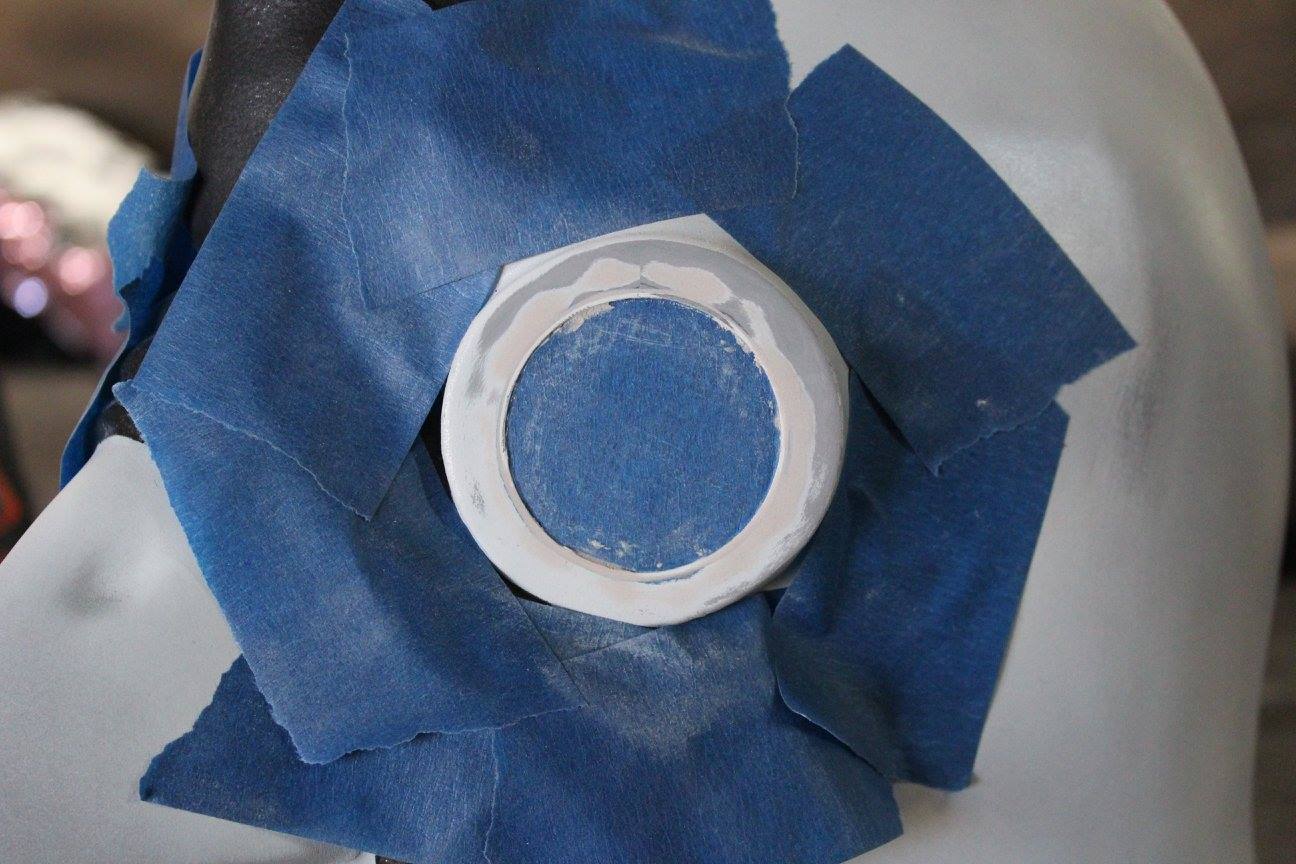 After I covered the seams on the eyes I gave the entire helmet a coat of white primer Just to make sure everything was uniform and prepare for molding! 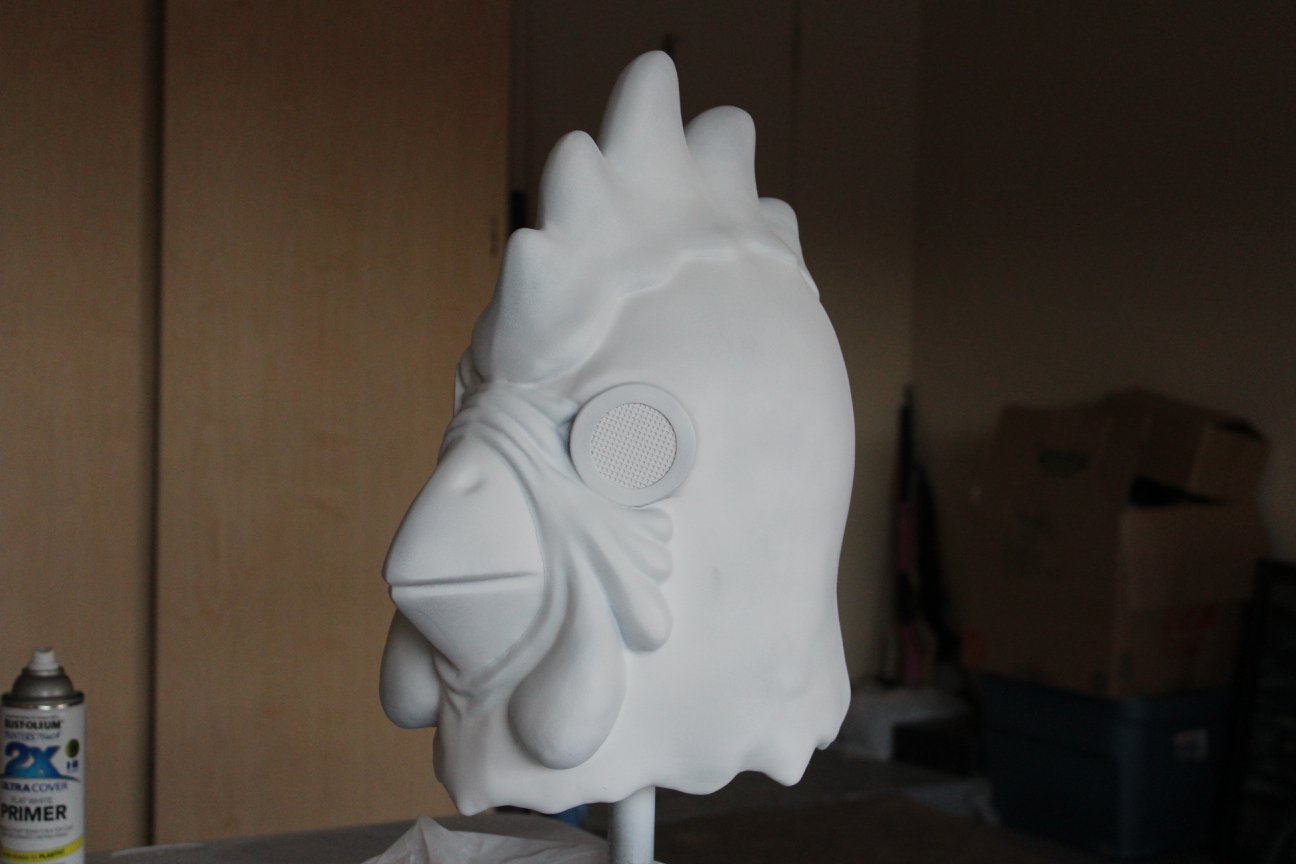 He was getting closer and closer to his final form by the minute and I couldn't have been more excited!

RPF PREMIUM MEMBER
Once I had the whole helmet primed I gave it a few coats of clearcoat, lightly wet sanding between each layer, after about a days worth of that it was ready for molding! I decided to do a brush on mold with Smooth-On rebound 25, so I set up a table in the living room and started pouring the two parts into cups and getting everything else ready! 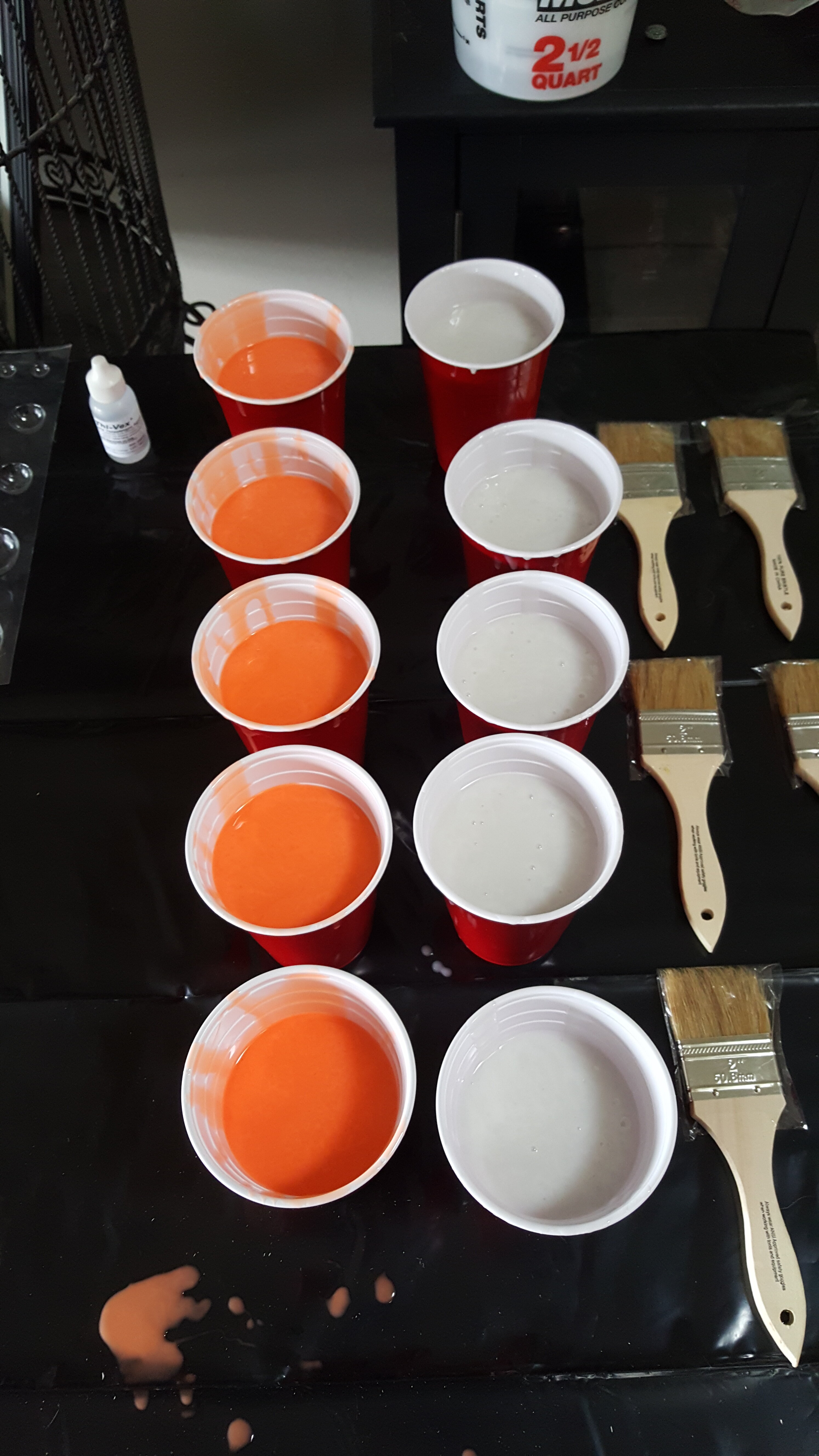 I the first two layers where just silicone without any thickeners and my god was this stuff messy. I've done brush on molds using rebound 25 before but just not on this scale. 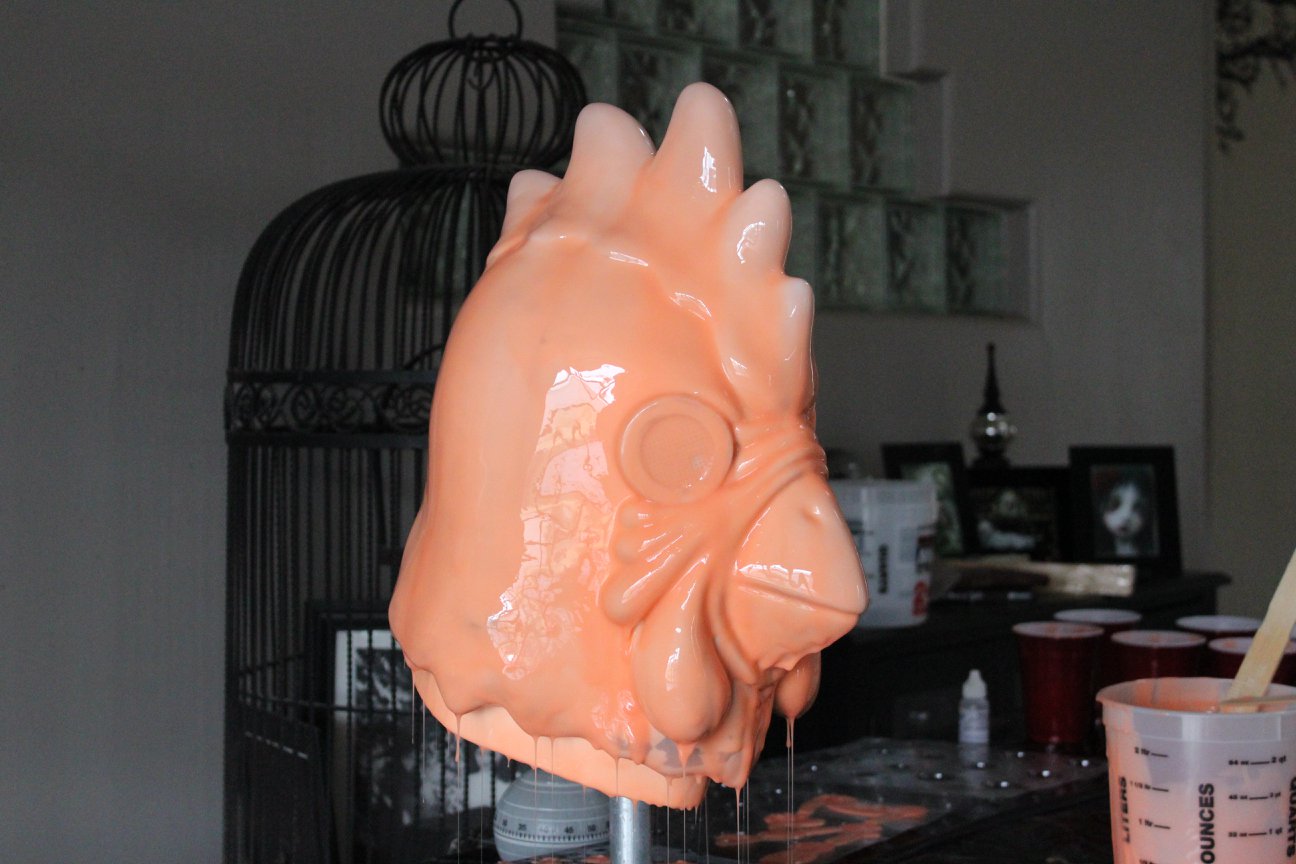 After a few hours I had a helmet encased in silicone! I decided to let the helmet sit over night just to ensure the silicone had plenty of time to cure. I was worried that the chemicals from the clear coat would cause some issues with the curing so I was pretty stressed for those 24 hours, but I grabbed the scalpel and started demolding! 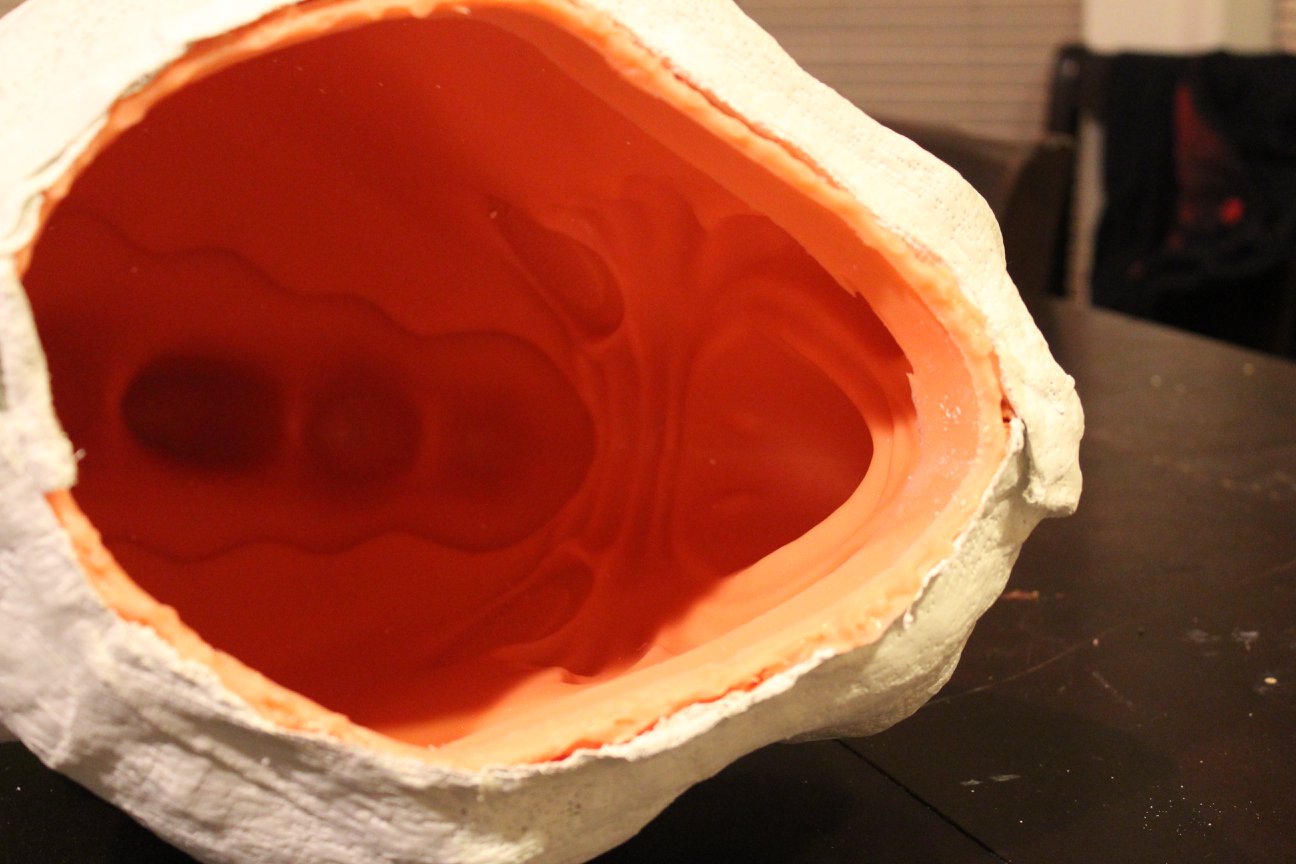 SUCCESS! I was over the moon with how well the mold came out, the silicone captured the detail of the eye mesh perfectly with little to no trapped air bubbles and everything else was flawless. I wasted no time getting some resin slushed inside and do my first pull. I went with Smoothcast 65D and alternated between bare resin and tinted gray resin as a visual guide to make sure I was getting even coverage. 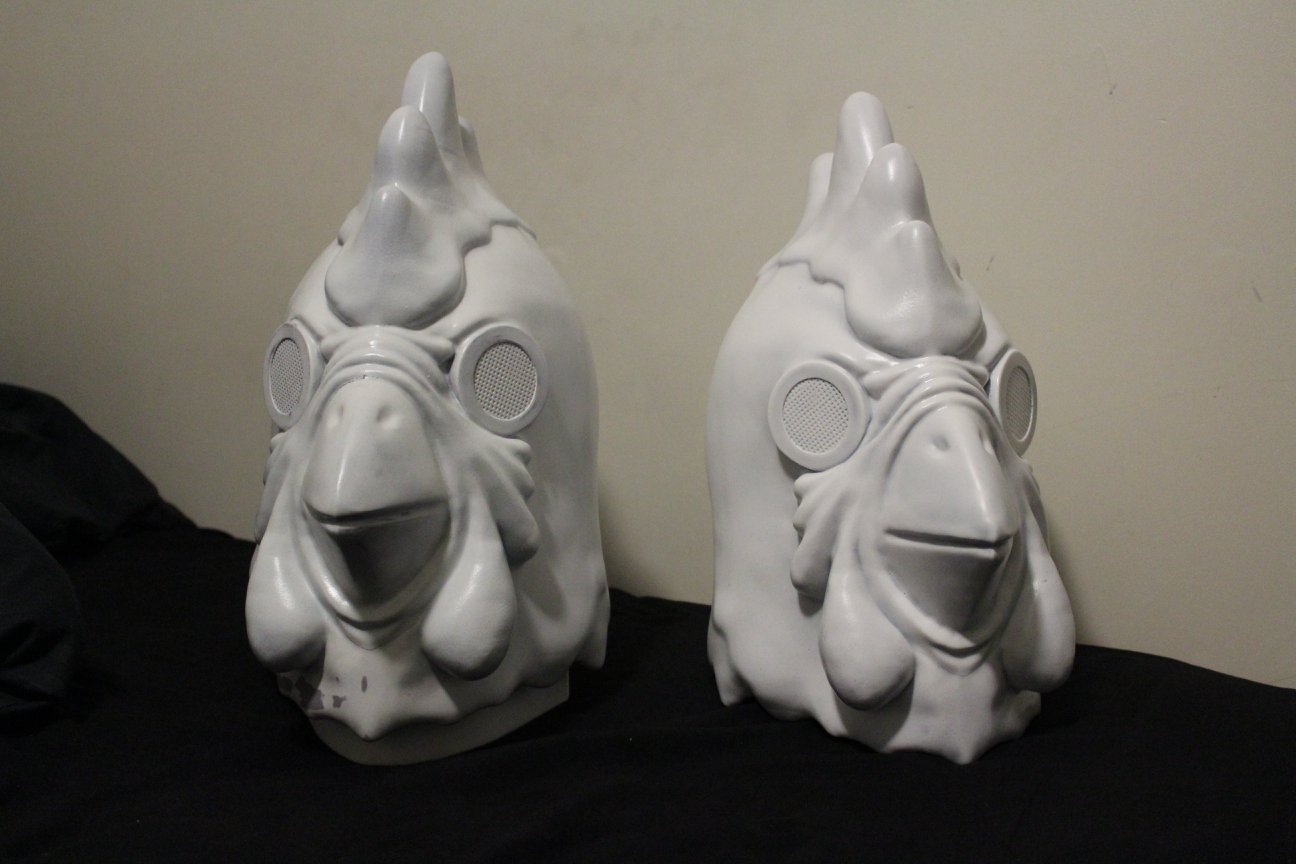 Mother mold on the left First pull on the right, I made the first pull a tad too thick as I wasn't familiar with the mold yet so It wasn't the greatest weight wise but I was still super happy with how it looked! I ended up doing a second pull and this one was significantly lighter so I started work on that pull.

I started by giving the whole thing a few coats of grey primer and then a base coat of white, and then I started taping of the wattles and comb for the red paint. 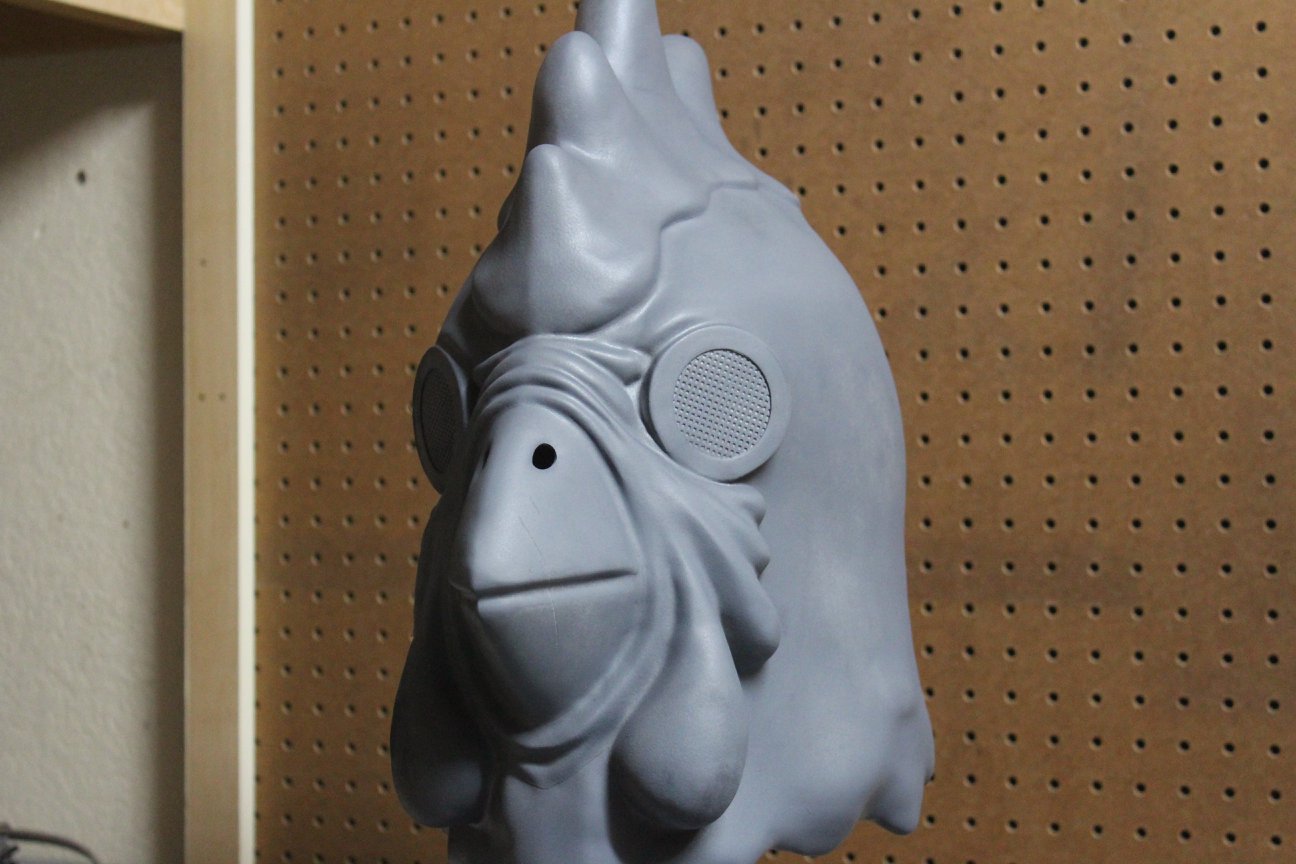 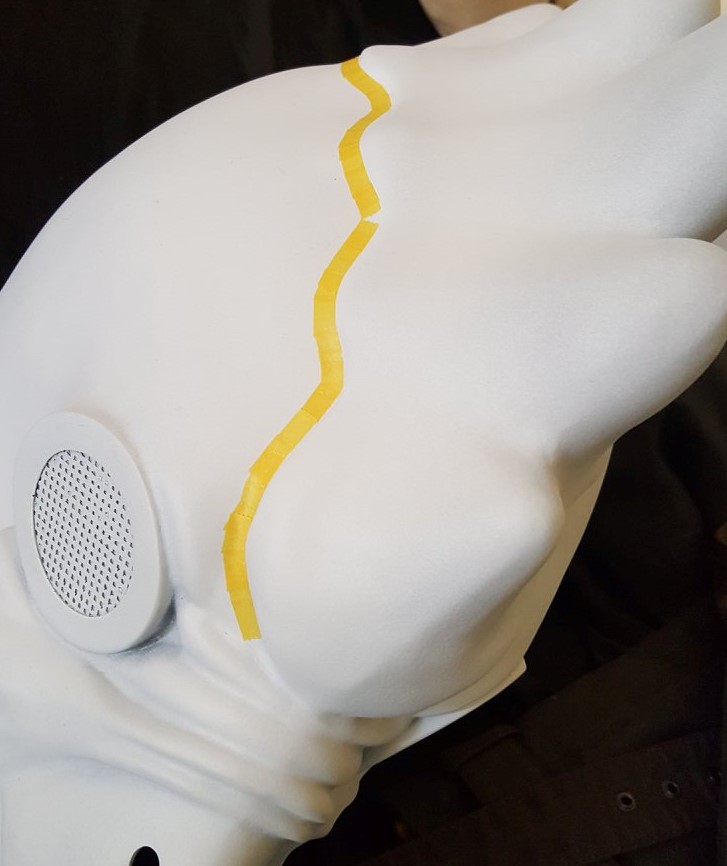 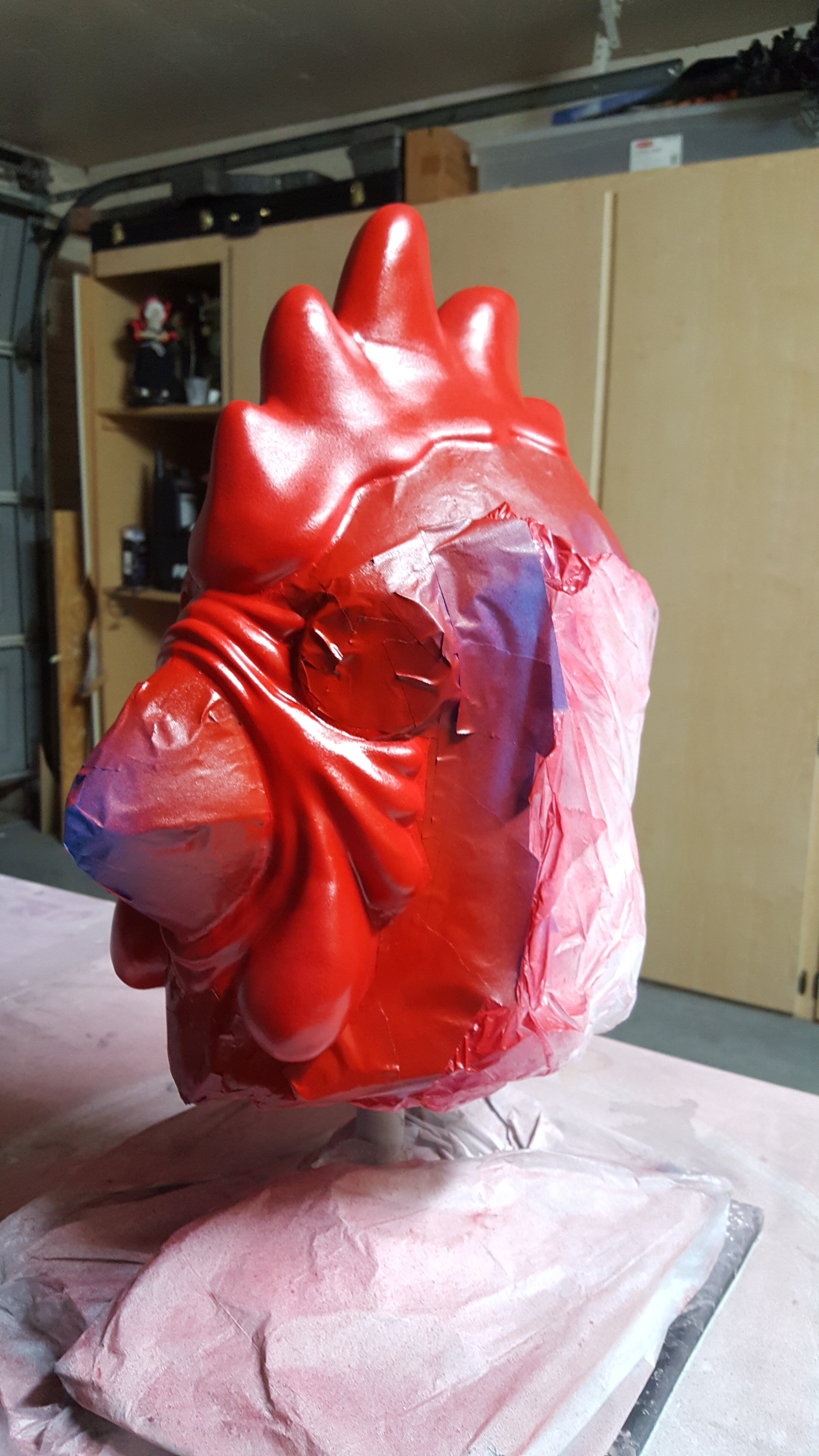 After the red paint was applied I masked off the beak and hit it with some yellow paint. 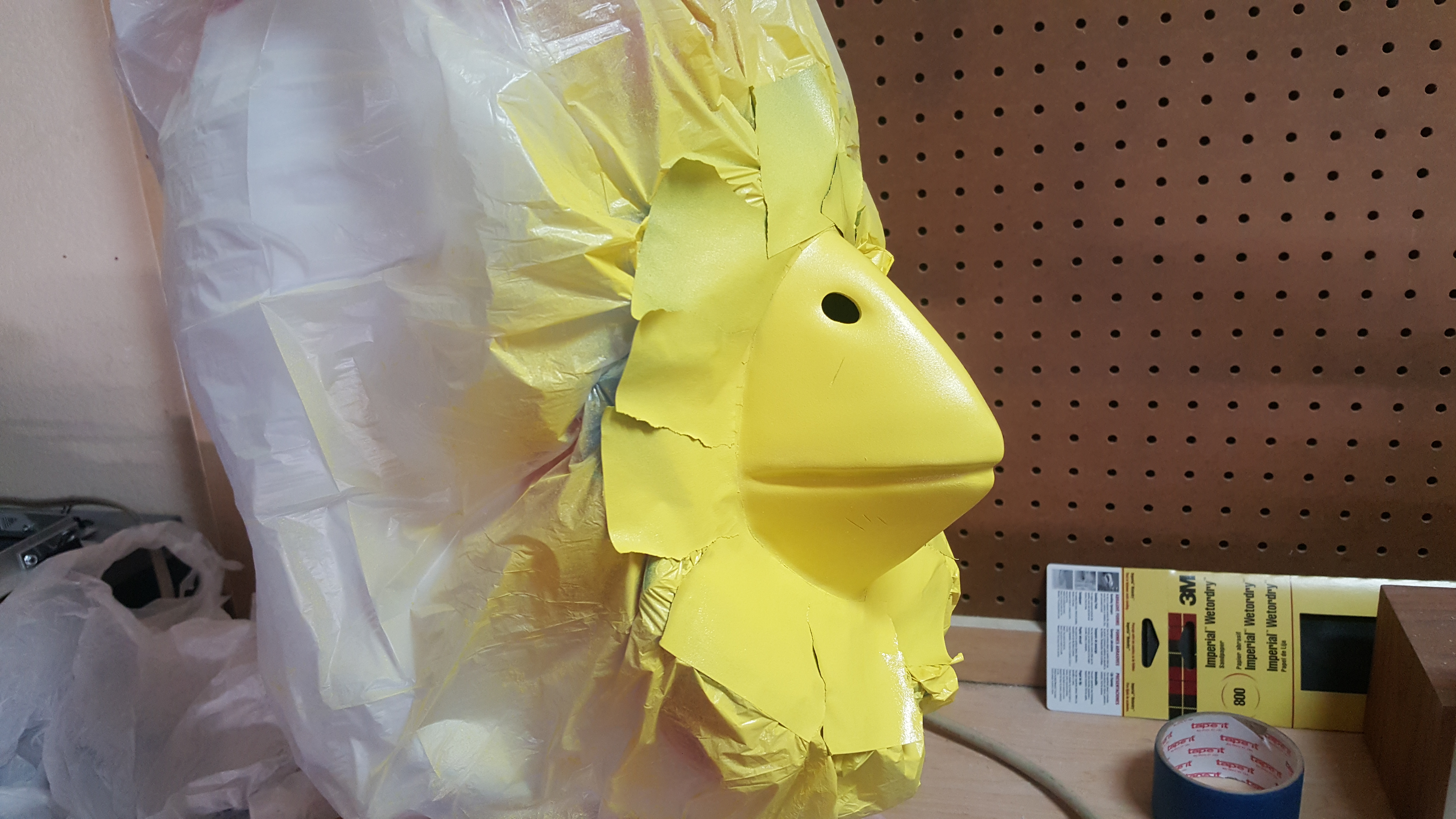 I let everything sit for a few hours and removed all the masking and started getting into some detail work with the airbrush. Let me tell you, every pass I did with the airbrush I got more and more excited seeing this thing coming to life before my eyes! 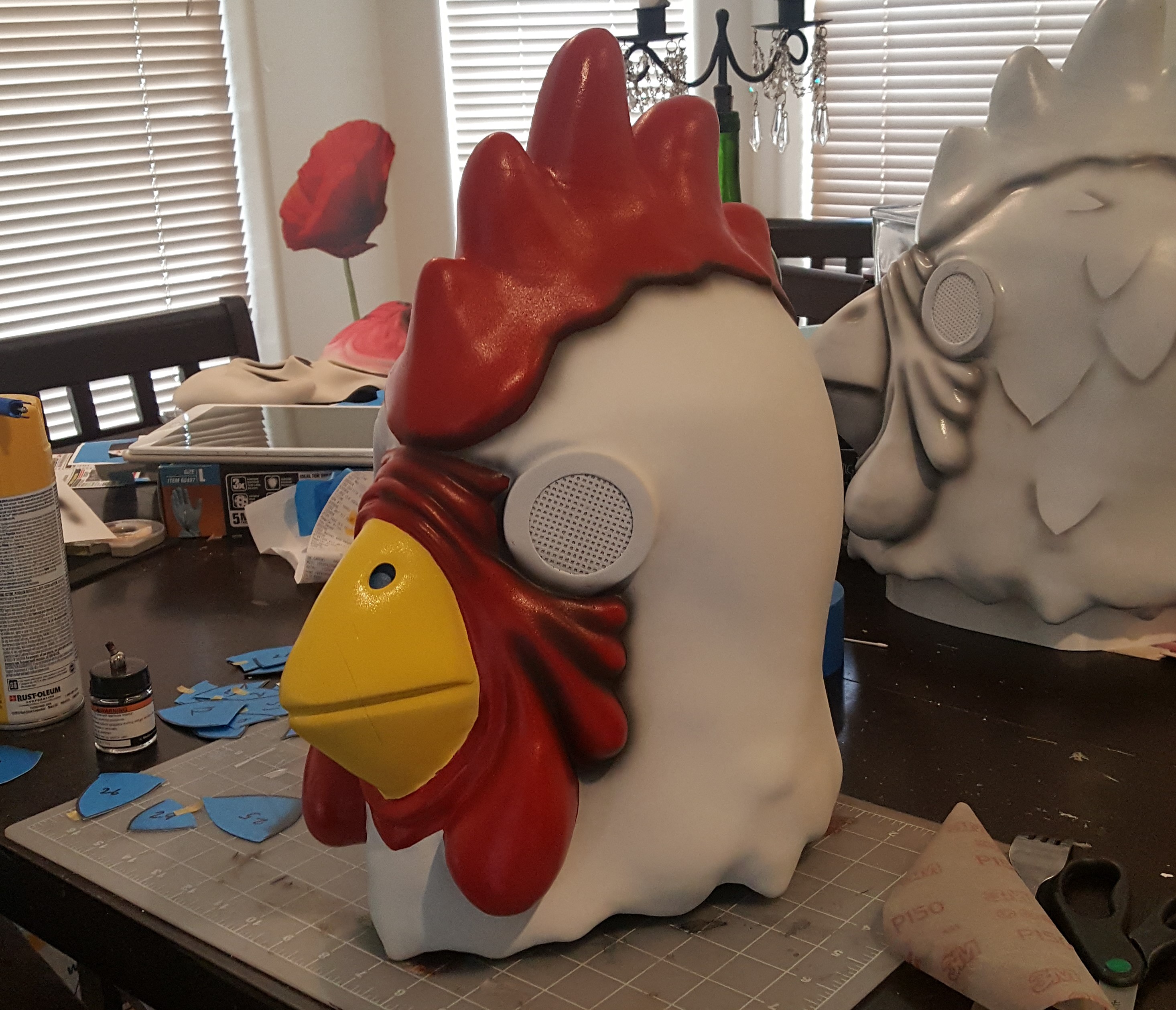 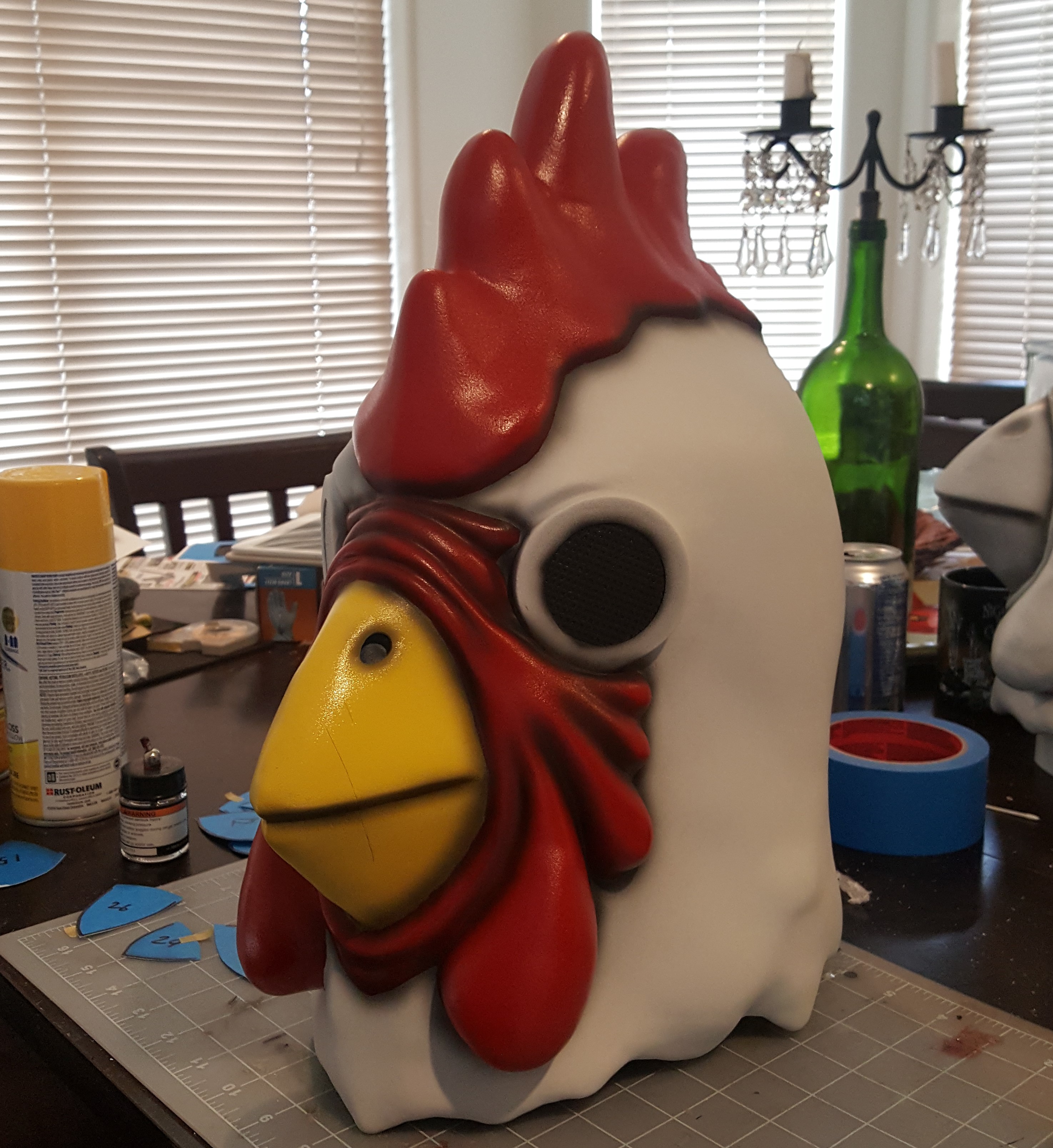 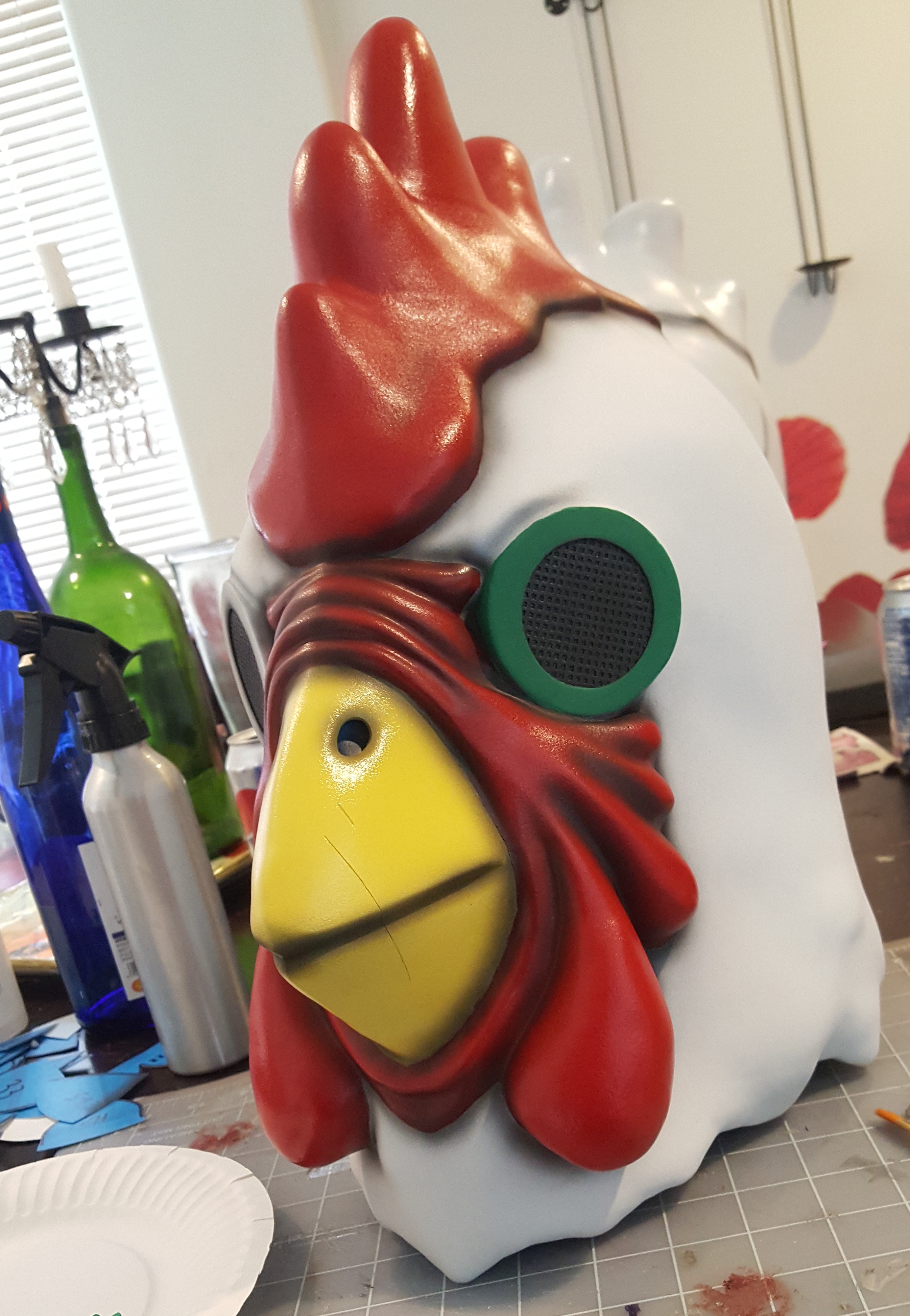