Do anyone know what is the type of the Predator-2 ancient trophy gun from the end of the movie?
I need type details or a link where i can buy a nice prop of the gun.
Thank you all!
Last edited by a moderator: Aug 2, 2017

http://members.ruralnet.org/clocks/flintlock-1.jpg
it's something like this , I don't know a specific name for it but you could find one for panoply purpose ,not functionaly!
and something I found interesting;The writing on gun the Predator gives Harrigan says "Raphael Adolini 1715". This refers to a Pirate who disappeared along with his crew in the Bermuda Triangle in 1718. His ship was found, but the gun, a prized possession of Raphael Adolini, was missing. He was one of the Pirates who flew a "Jolly Rouge", a red painted version of the "Jolly Roger" that meant his crew took no prisoners.

Wow, the tale about the gun is very interesting! Its a true story?
I need the name of the flintstone gun or a link where i can buy a good prop.
Thank you!!

I think is just a myth ,but sounds good ,isn't it?
search google and you'll find many interesting articles about!

I believe there is a Predator comic that explains how the Elder got that gun. It is along the lines how Impaiatu explained. That the captains crew began a mutiny and the elder predator was cloaked and stalking the ship. Basically the predator saw the captain fighting against so many foes and doing so well the predator thought he would make good prey so choose to help the captain so his prey wouldn't die. When the predator finished off the rest of the crew he found that the captain was mortally wounded, the Captain believe that the predator was there to help (HAHA!) and gave him his prized gun as a token of appreciation for helping him defeat the crew. If I can find any reference material to the gun or even to that comic I will post it.

RPF PREMIUM MEMBER
The name Andolini could also be a nod to the Godfather series.
Vito Corleoni was actually named Vito Andolini.
When he came in on the boat to Ellis Island the immigration officer read his name as Vito Corleoni
as Corleoni was his home town in Italy.

Hehe Thanks, but is no great help

From the Dark Horse Comic

Dropping anchor at an island in Guinea in 1718, the Captain of the small band of pirates suddenly faced mutiny over a stolen case of gold which was destined for a church. The Captain wanted the gold returned, much to the anger of his crew who turned against him. In the following battle, a watching Predator joined the fray and fought back-to-back with the Captain - attacking the rebellious crew with an extendable sword.
In the climactic scene, with the crew dead and the Predator and Captain about to battle mano a mano, the Captain is suddenly shot in the back by the last member of his crew, who was in hiding. Denied his trophy, the Predator angrily blasts the final crewman to hell. With his dying breath, the Captain whispers 'take it...' to the Predator, throwing him his beautifully engraved pistol. With the Captain dead, the Predator takes a moment to think about this battle - and with some curious respect, leaves the dead Captain his extendable sword... 'Take it.'
The final scene sees what looks like a shooting star moving across the evening sky, far above a now silent island - and a pirate ship in the bay, never to leave anchor again.

Ya...What Master Hobbs said...hehe thanks I had trouble finding that online.

Thanks, but this is not what i search.
I search the name of the gun, not the tale about.

Sorry about...I found a reference pic on the forums http://www.thehunterslair.com/index.php?sh...mp;hl=flintlock but I have been looking all around the internet and am not finding anyting pertaining to the name of the gun it self. The only thing I can suggest is looking up flintlock pistols of the 17th or 18th century and trying to find one that matches well enough.

Hehe Thanks, but is no great help
Click to expand...

Seems to be a Harpers-Ferry Kaliber .58

Here you go...the closest match I have found is from
the illustrated book of guns edited by David Miller
page 55>flintlock pistol 16th century Spain. This specific model
was known for the style of the lock known as the miquelet or
miguelet. A type which was believed to have originated
in Catalonia province. This weapon was known to have had a
very strong mainspring hence the reason for the top ring fitted
to the cock tonprovide a firm grip. This style was made well into the
18th century. So there you have it.

took me 6 months to find the right one i had to screen cap the hell out of the movie but got it right...
the name plate was custom for the movie but here is the model 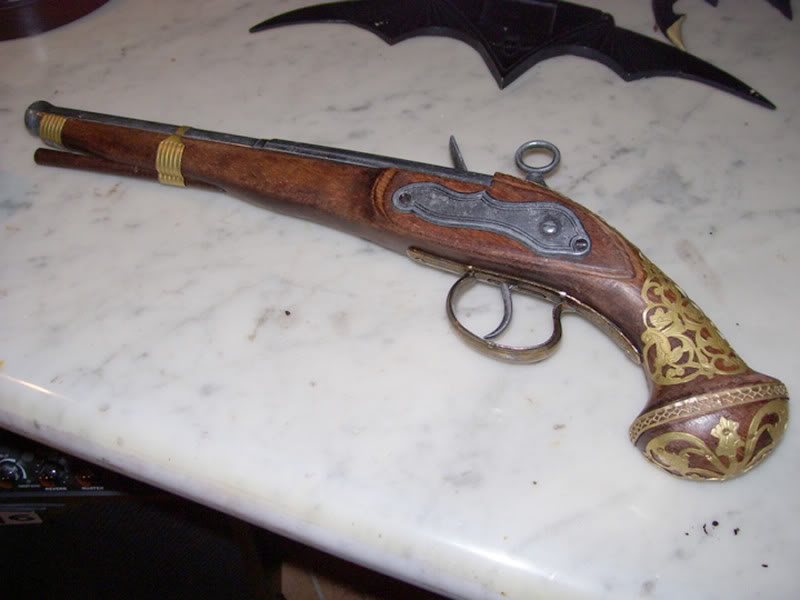 nice find, you gonna customise a plate with the date on etc

Wow Andrew that's so fricking awesome, how much did something like that set you back? Where can you get them?

my source for getting the flint no longer works in the co. it set me back like 300 beans a few years ago. I thought about doing the plate screen accurate, but didn't want to spend the $$ on it