Well thought I would start my first official thread with my build in progress of Owlman. I am hoping that by starting this thread it would assist me to speed up my progress by adding updates and such.

For those of you unfamiliar of Owlman he is a DC villain from an alternate dimension. He is technically Batmans older brother. Wiki page :- Owlman (comics) - Wikipedia, the free encyclopedia Basically you could file this as an alternate batman suit.

Anyway the version I am aiming for is the Owlman from the DC animated movie Justice League: Crisis on Two Earths, as voiced by James Woods.

I have started the mask first. I had an unfinished batman mask from the DC Online Future Batman mask. (As pepped by Graphic Jordon, Thankyou).

I was not happy with my pepped mask the way it sat on my head, I had pepped the ears to wide. Later on after watching The Crisis on 2 Earths movie I decided to use my abandoned cowl as a base to Owlman, a great many modifications have taken place so far...

I cut the forehead away to the desired shape, and cut the eyes to a much wider shape losing most of the brow. I then added a beak to the nose area after filling in the nose and brow ridge.

After some filling and sanding later I had the above shape so far. Unfortunately my cutting and sanding the original design had weakened the mask considerably, cracks on the forehead above the eyes kept occuring so unfortunately I had to attempt to strengthen the narrow parts with FG and filler.

Also design wise I was not convinced that the ears matched the source material so further alterations would need to be added.

So After filling, I had lost most of my sanding work especially the nose, wouldn't normally use filler so thickly but needed it for strength. I also decided to make some additions to the ears/wings by adding a bit more curve to them. The black eyes are peices of foam I plan to use for the eyes later on.
Last edited: Mar 5, 2012
M

Your off to a great start, looking forward to see the progress...

I'm curious to see how this progresses. I really want to do the Frank Quitely version from JLA: Earth 2.
Last edited: Mar 5, 2012

Update: Well I decided to go the Spiderman route with the lenses and use a mesh. Couldn't sleep so I tinkered around with some foam and some flyscreen patches. Bit of cutting, spraypaint and glue and I got these....

Filled and sanded the mask a bit more and gave it a quick coat of primer, this is what I got so far....

Well thats it for a while now probably won't have much free time to work on this for a few weeks, damn work and commitments getting in the way of important stuff.
Last edited: Mar 7, 2012

At first I thought you might be going for this 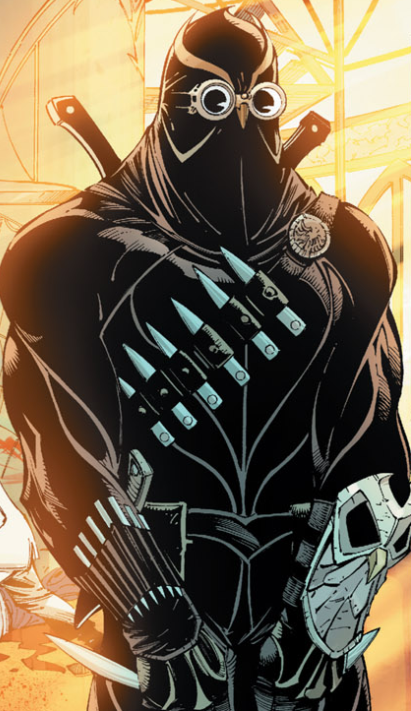 Great start I like where this is going so far
S

Hi there, good job, way to do something new!
M

I also thought you were going for the talons of the Court of Owls. Looks cool, can't wait to see it completed.

Nice build! Earth 2 has always been one of my all time favorite Justice League storylines! Can't wait to see the finished product!

This is real cool. I am going to subscribe to this. I look forward to how this will turn out.

Cool build. Good job on the mask so far.

This should be interesting
H

This is great! I would love to see this finished. Please keep at it!