Original Tie Pilot Chest Box ..Where are they?

Inquisitor Peregrinus said:
I feel like the ribs are shallower than some people think. The DS2 hangar set photo has a nice, strong overhead light source that shows them up nicely. Is the one geordietrooper took pics of in the Archives the same as the exhibition box? That is, did more than one get the upper left square painted red? And, if so, when and why? It was never that way in any of the OT films that I've noticed. And I can barely see the ribs on the MoM box.

The relief-comparison that overhead lighting allows shows the blue square to be a good double the thickness of the ribs. Their shadow is far fainter. Also, Piero has them extend all the way to the edge, past the rockers, when it looks like they not only end at the rockers, but taper down to them. Those end "riblets" he has on his past the rockers aren't there on geordietrooper's other Archive pic from that angle, for starters. But in general, the ribbing is less pronounced/shadowed next to them, and there isn't even slight ribbing visible in that original Elstree dress-up photo RBJ started out the thread with, or the higher-res running-through-the-halls pic. Even if the contrast is such that one couldn't see the ribs, if they're of uniform thickness, you'd see them against the first rocker. And we know they're there on the ANH boxes (and why I think the same half-dozen were re-used for the ROTJ hangar scene, rather than new ones made) thanks to that TIE fighter cockpit set photo.

To my eye, the ribs are only in the middle third, between the pinstriping and the rockers, and go from maybe 1/16" at most down to the flat background right where the rockers mount. I'm loving this thread. I'd gotten frustrated at my own researching into the exact detailing and proportions of things because of the paucity of decent high-res, high-contrast pictures or footage. Those Archive pics help a ton, geordietrooper. Thanks for posting them.
Click to expand...

From what I can tell ONE box got the upper left tile painted red. It’s the MOM box and the one in the archives pics. You can see the red paint on the edge of tile next to it.

I’m fairly certain it is the same box in the hangar shot but not sure.

Yep just looking through several pix, you can see they go all around.

The MOM up shot in the first post you can see them on the side.

division 6 said:
Yep just looking through several pix, you can see they go all around.

The MOM up shot in the first post you can see them on the side.
Click to expand...

Fascinating. I'd missed that. So there are continuations of the ribs past the squares, but not the rockers? geordietrooper's close-up pic is pretty clear on that point.

Inquisitor Peregrinus said:
Fascinating. I'd missed that. So there are continuations of the ribs past the squares, but not the rockers? geordietrooper's close-up pic is pretty clear on that point.
Click to expand...

They dont show up evenly but they go All the way around.

Weren’t two of the original TIE chest boxes used for the AT-AT drivers in ESB?

RPF PREMIUM MEMBER
Using the pics posted by RBJ and georgietrooper of the one box we can study up close... 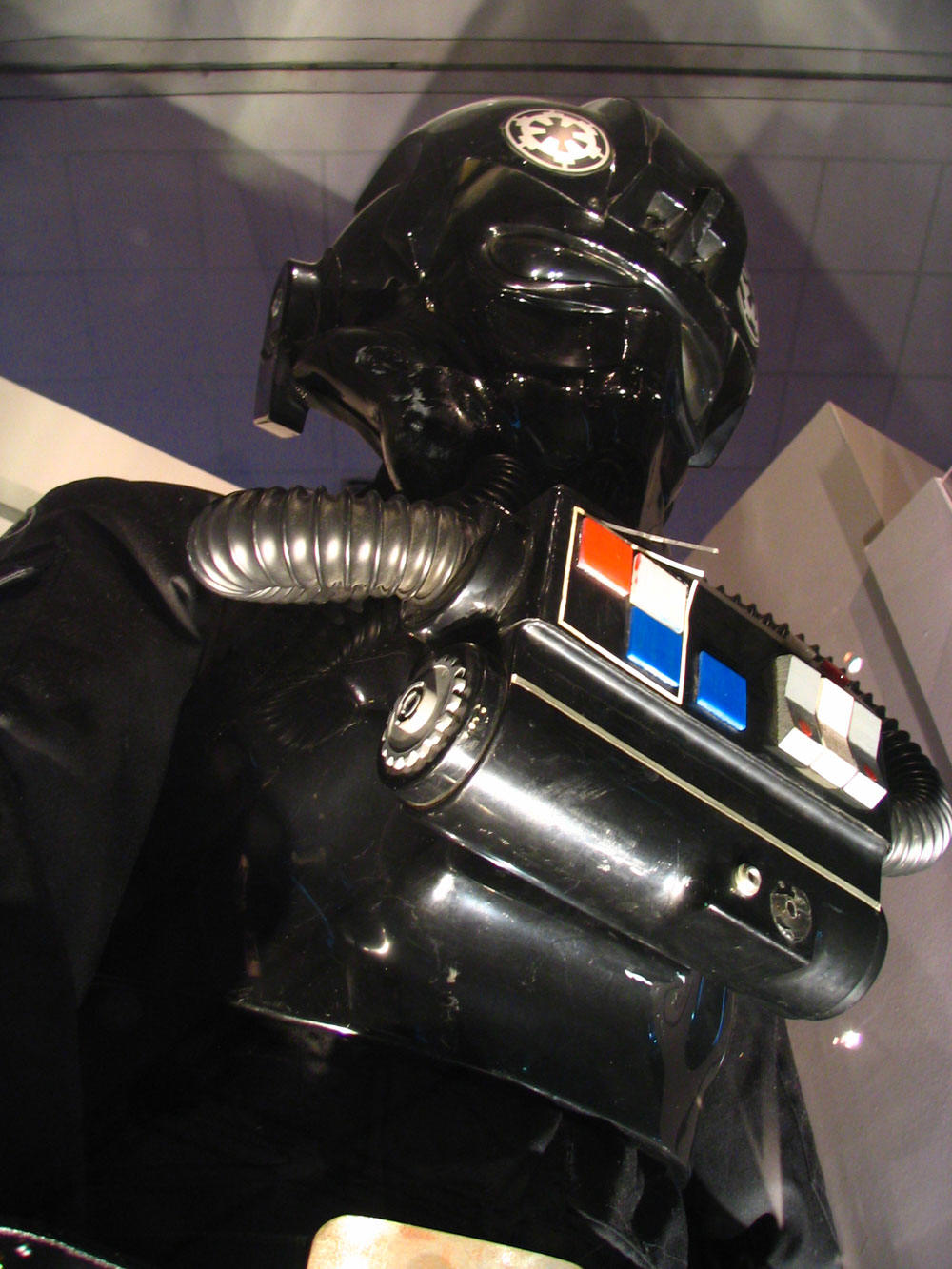 I see the ribs extend to the end of the front at this end, interrupted by the large square area outlined by the pinstriping. Said pinstriping is flat where it crosses the line of the ribs, not "puckered" as it would be if it were crossing them. Also, no gaps visible behind the now-red-painted square, plus it and the square next to it are the same thickness as the one below them and the one outside the pinstripes, and all are laying in the same plane (i.e., the upper two aren't sticking a sixteenth of an inch out past the lower two, as they would be if they were sitting on contiguous ribbing).

I further do not see the ribs wrap around the corner, but end in clean rounds just before the corner. That, to me, indicates they're not even supposed to continue past that. 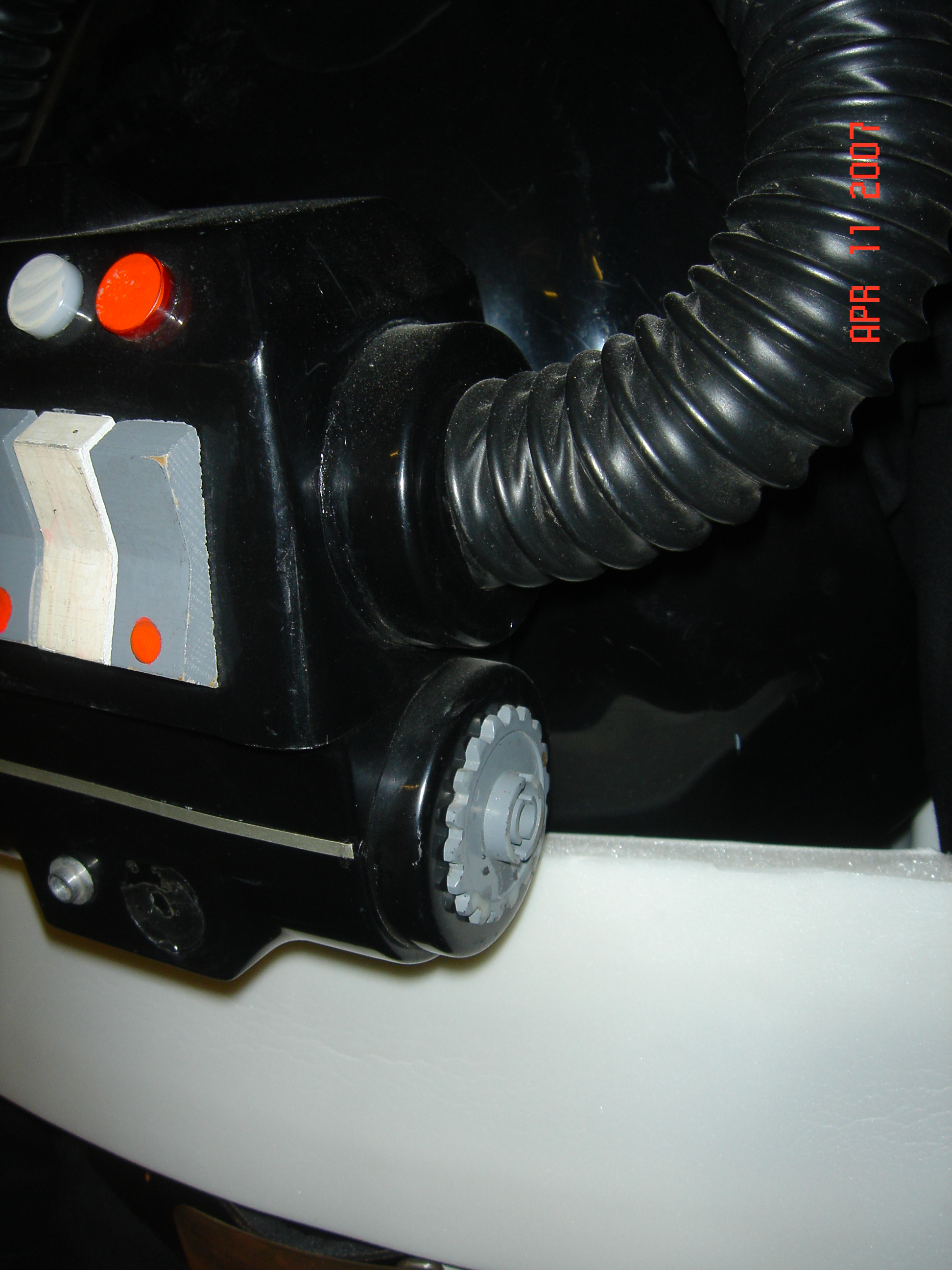 And this end of it definitely has no ribs, front or side. Not even faint, as with a weak pull, which it doesn't seem to be from the rest of the crisp edges. 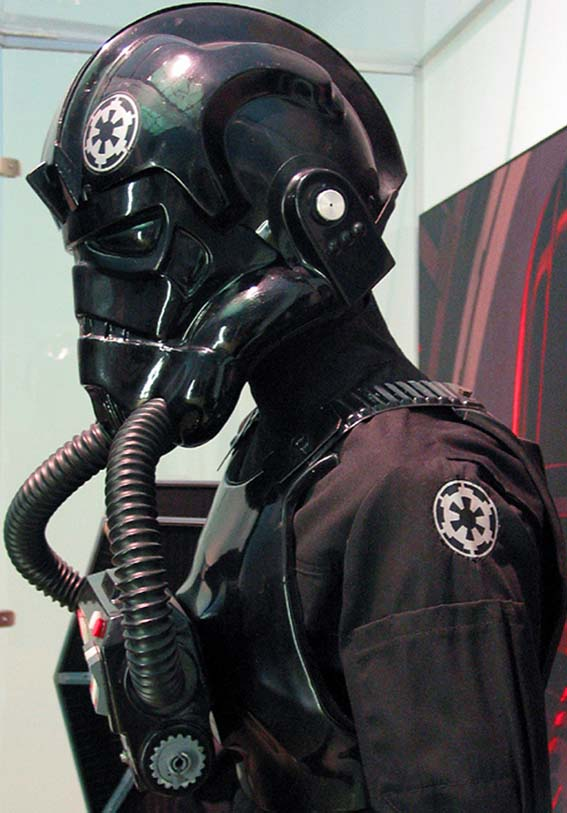 And this other one from the MoM exhibit of the same chest box. I don't feel like I'm seeing ribs past the hose mount. Plus, it seems silly to have them there when a flat back would mount to the chest plate more cleanly. So I acknowledge there are additional riblets on the front past the squares. I see nothing to indicate they "go all the way around". If Ainsworth had assembled the top piece "backward", and the ribs go all the way around, that'd be a nonsensical description for something completely symmetrical. If they're only on the front, and they were assembled with the ribs facing the back, I can see that as an oops, but those pictures aren't clear enough to tell.

Davy, you say you know for 100% sure they go all the way around, but won't say how you know. That implies a level of knowledge somehow above studying an original piece up close and personal in the LFL Archives. Cite an NDS if you have to, but the burden of proof is on you to counter what our own eyes are showing us. You say you didn't come here to argue, but I see no ribs past the rockers or on the sides, neither does anyone else, and you're saying we're wrong about something that seems plain as day. Without backing it up. That's... kinda argumentative.[/I]

I'll address some of these points shortly but one thing is I feel like several people are overestimating the prominence of these rib features. They are subtle (since I dont believe they an intentional part of the sculpt), and what you are seeing is more a groove that goes in slightly. They would not interfere with any greeblies oflr pinstriping.

Do any of the people here own Anovos Tie boxes?

Don’t want to derail this but do we have any pictures showing the chest/back strapping?
Still unsure about if there was a strap between chest and back on the sides. It’s always hidden under pilot’s arms...

From this pic it shows a tab with a snap on his right. 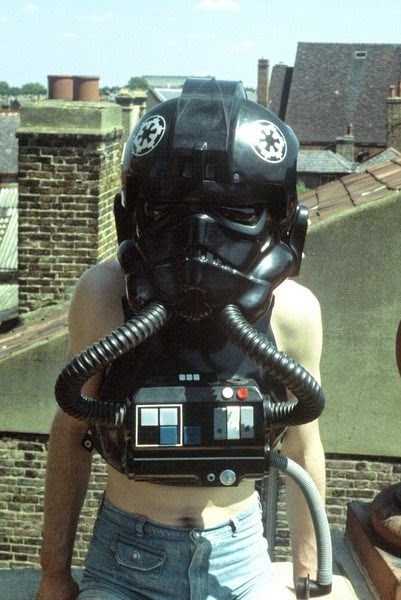 If you zoom in on this one it looks like there might be the dome of the snap (painted black) on the the front plate on the right side on this pilot. 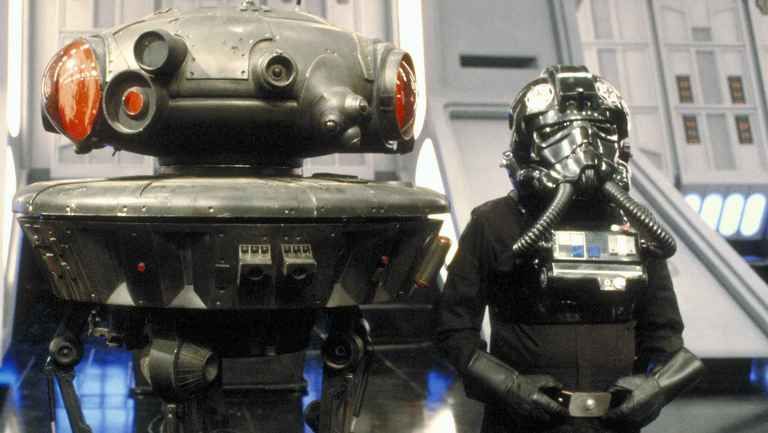 Thoughts on the ribbing may be from the actual vac-forming over the buck that happens some times (or and) as mentioned a sloppy or warping buck.
No matter, it must have been a real bear to get them off with that locking in.

We (Hi-Impact, the group I was in) had a hard enough time pulling them off smooth acrylic bucks. 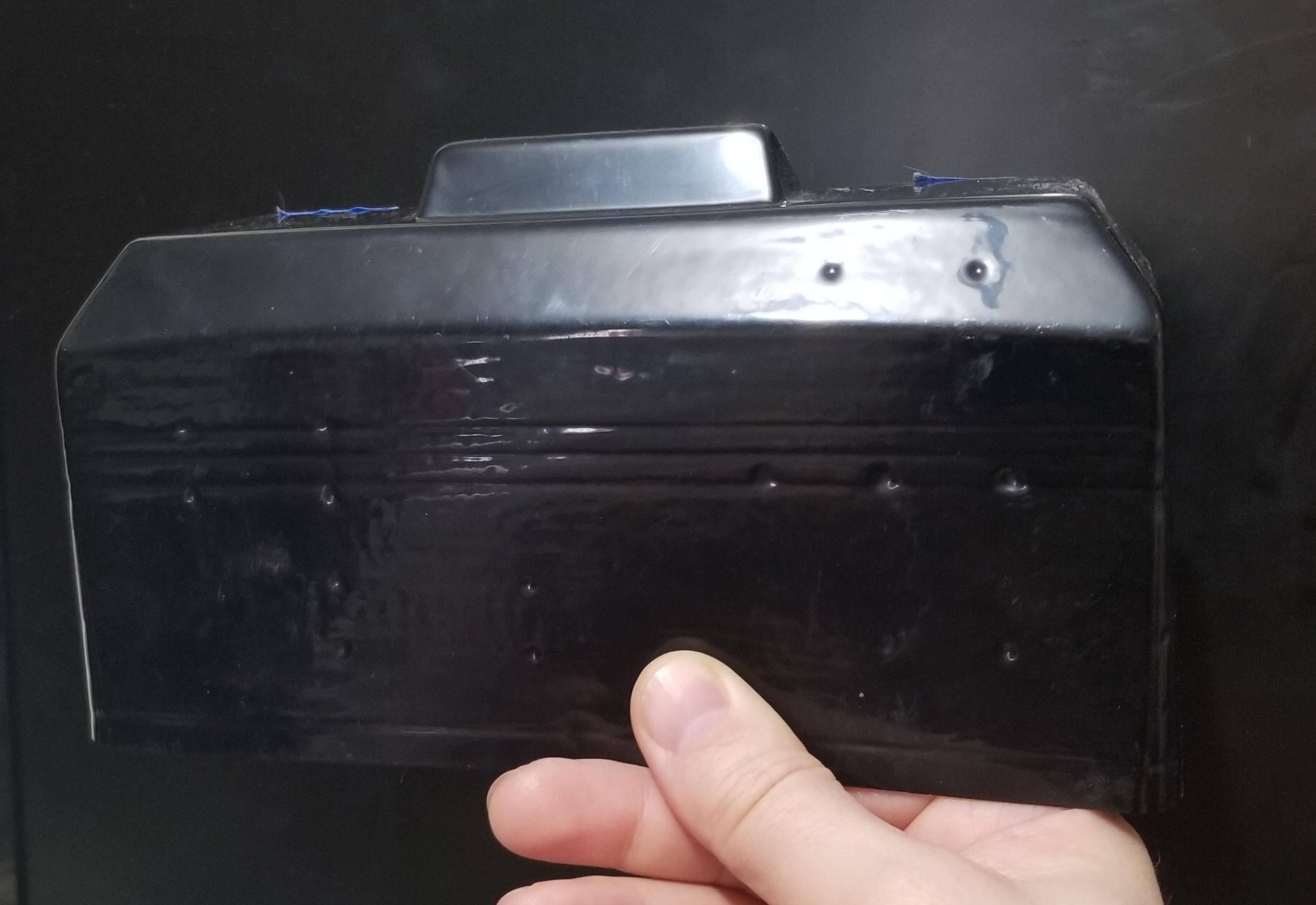 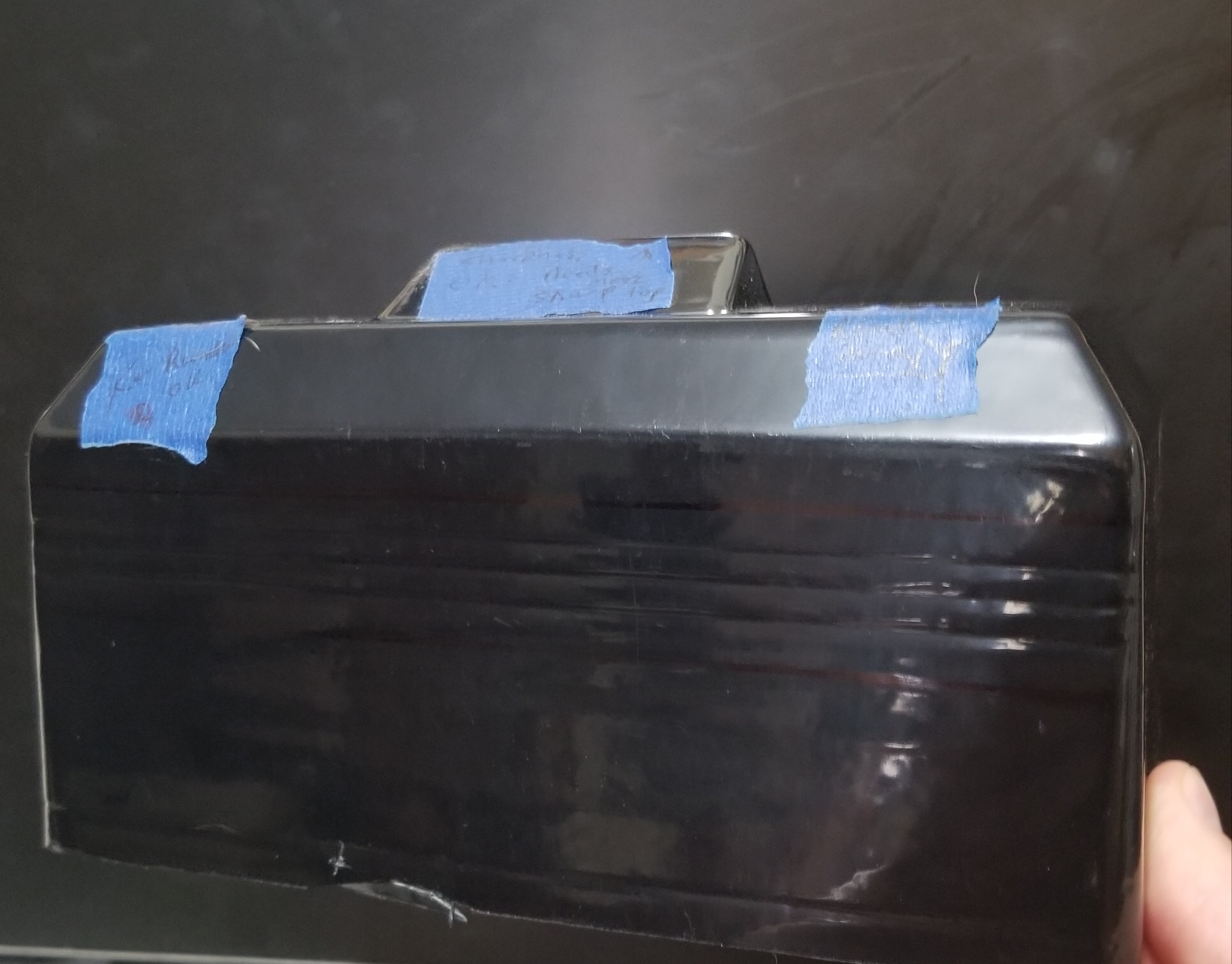 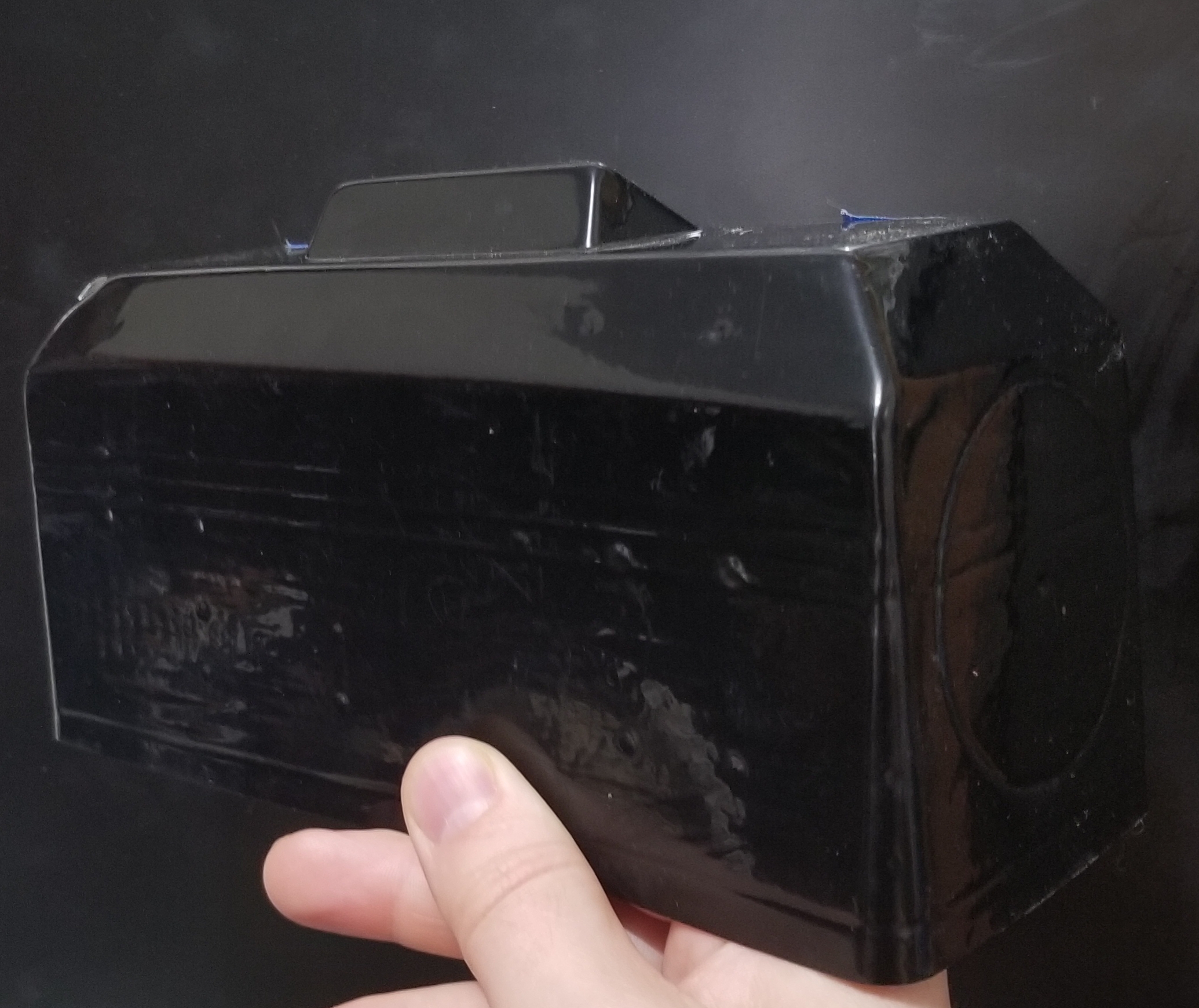 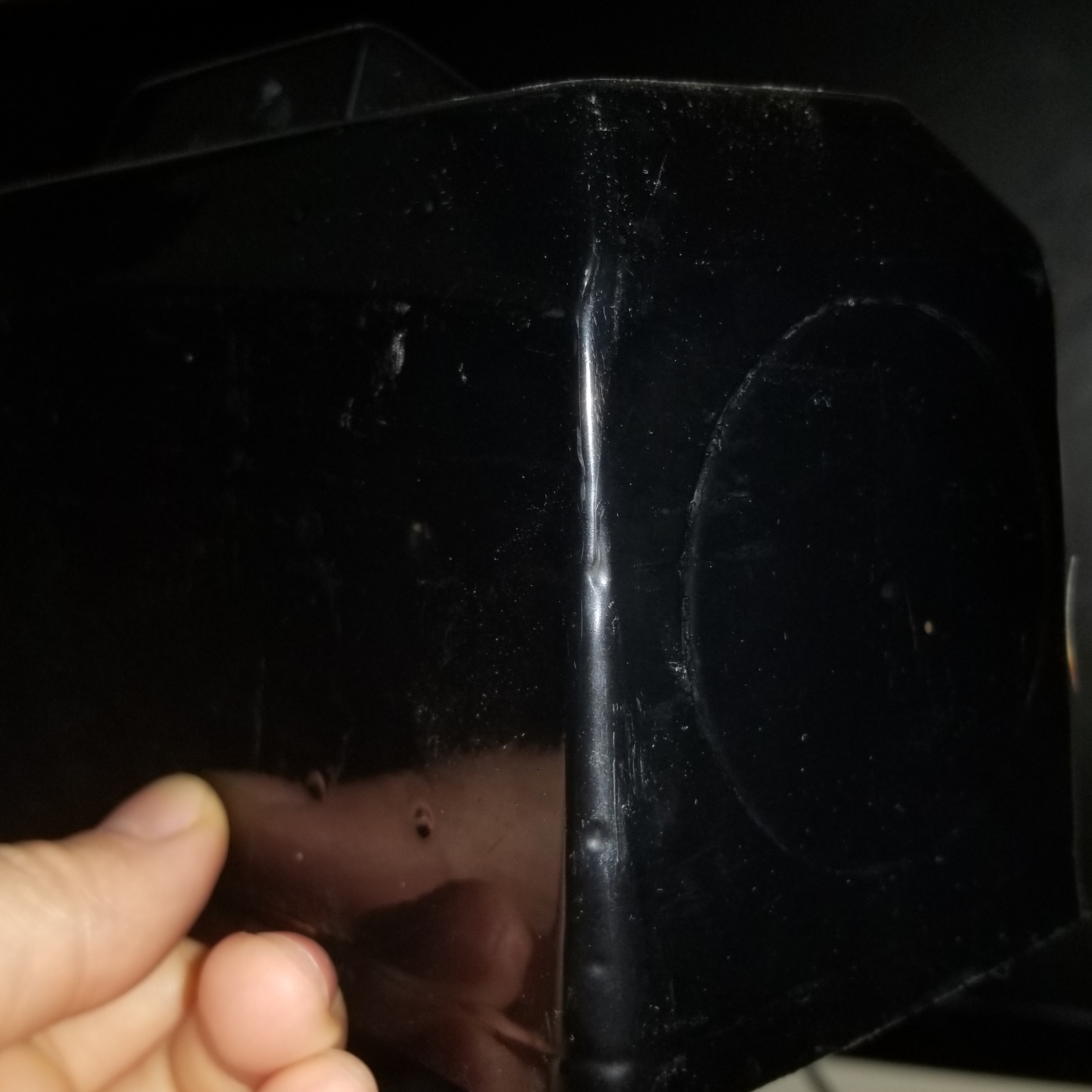 what box is this anovos ?
showing anything other than screen used doesn't really help does it

The Anovos was a scan of a real one. It's not a perfect replica, but I thought it would be helpful to show the detail. It just needs a few tweaks 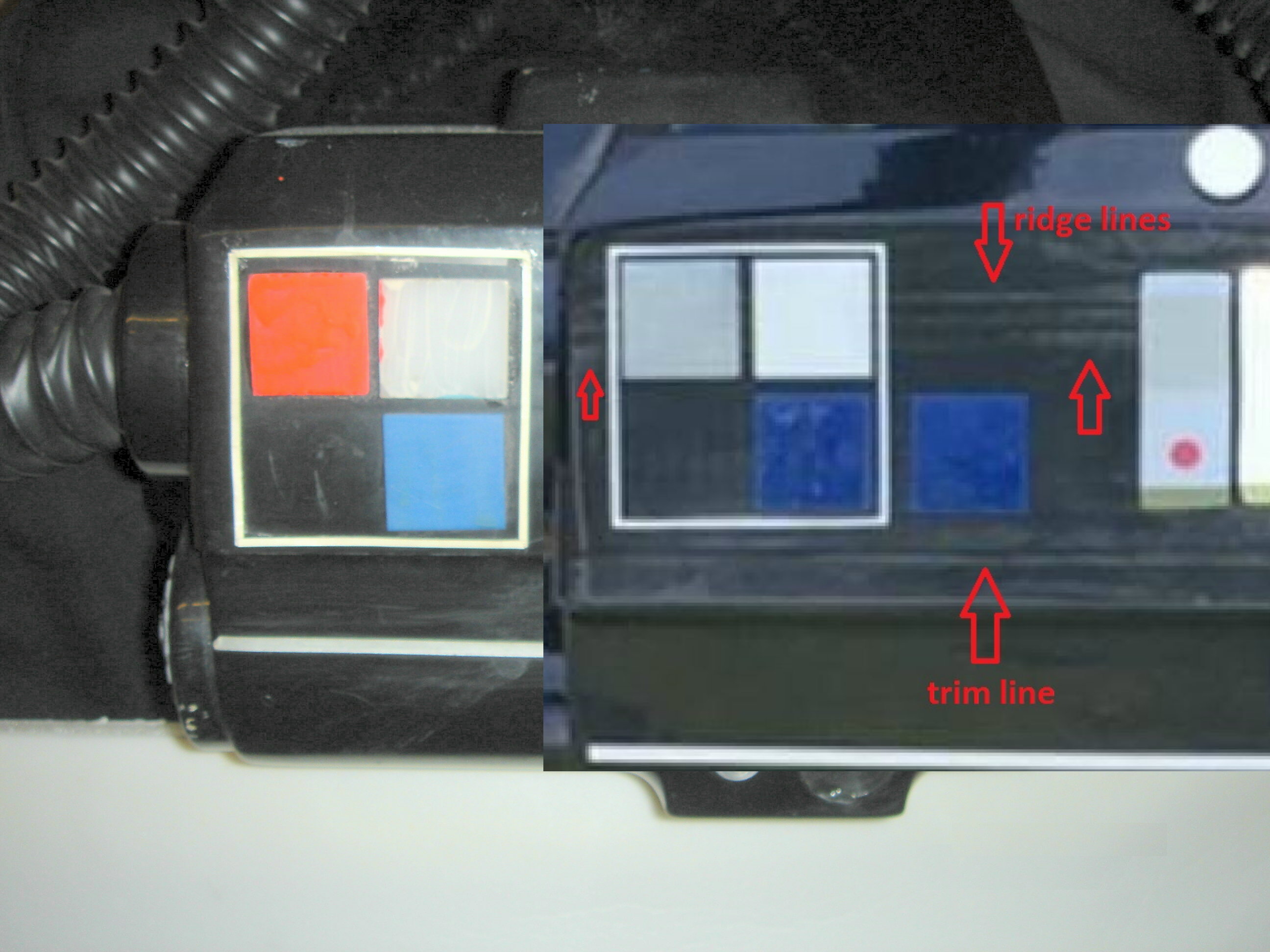 for what it’s worth, I found this pic of a Anovos box in a completed EBay listing..no ribs that I can see. 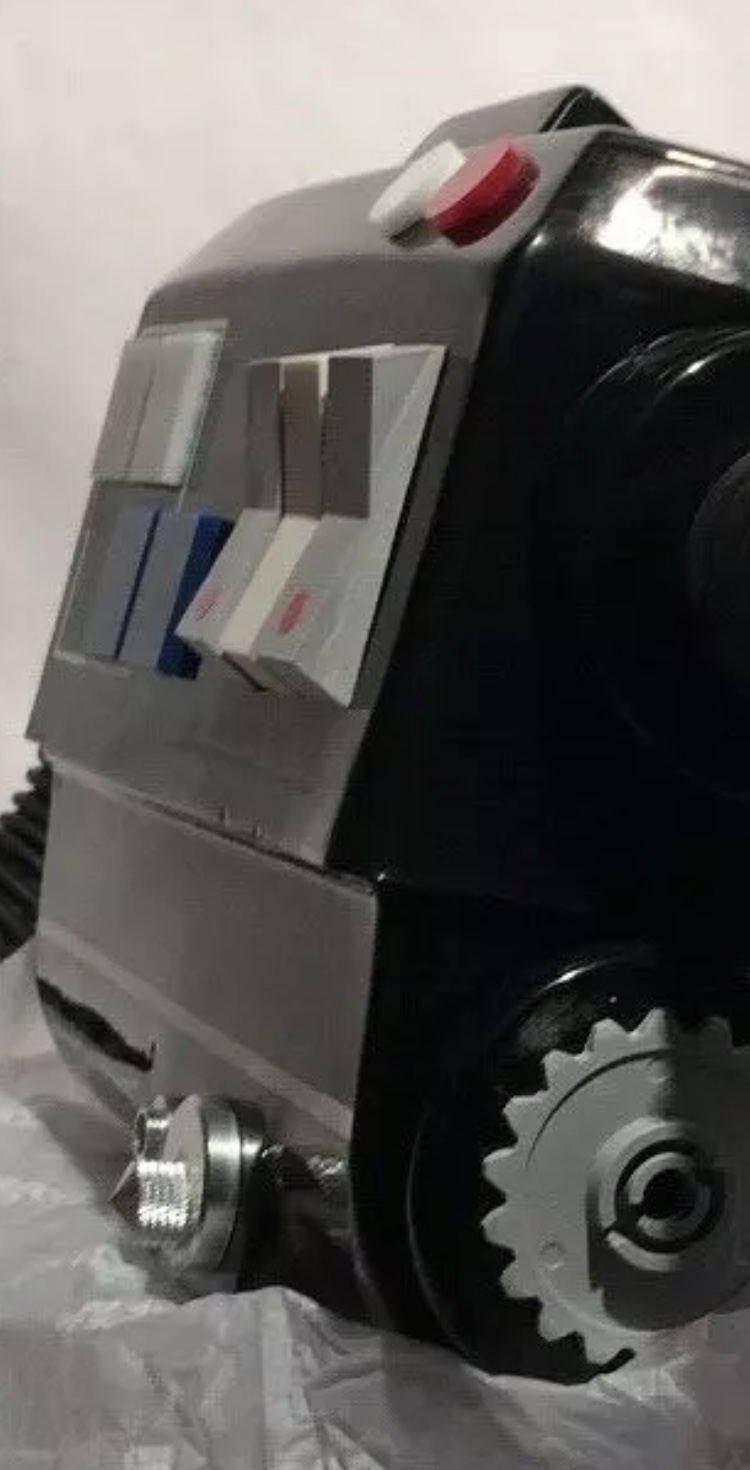 
RBJ said:
for what it’s worth, I found this pic of a Anovos box in a completed EBay listing..no ribs that I can see.

Its got the same error with the trimming. Oops. But yeah I'm sure it has them. They just dont show up well under all conditions; just like the real deal.

RPF PREMIUM MEMBER
Davy Jones, thank you. I'd also still like to see the box ANOVOS scanned -- since they themselves acknowledge they start with scans and then clean them up, etc., we can presume it's close, but not 100% exact match. And without seeing the original item it was derived from to compare, we can't know how close, or, not, it is. But that really does cast things in a whole new light. Phrase carefully picked. It's like the damn lightsource brainteasers. Look it this way, it's convex, lit from above. That way, it's concave, lit from below.

So looking at this pic again, in light of what you've said and shown... 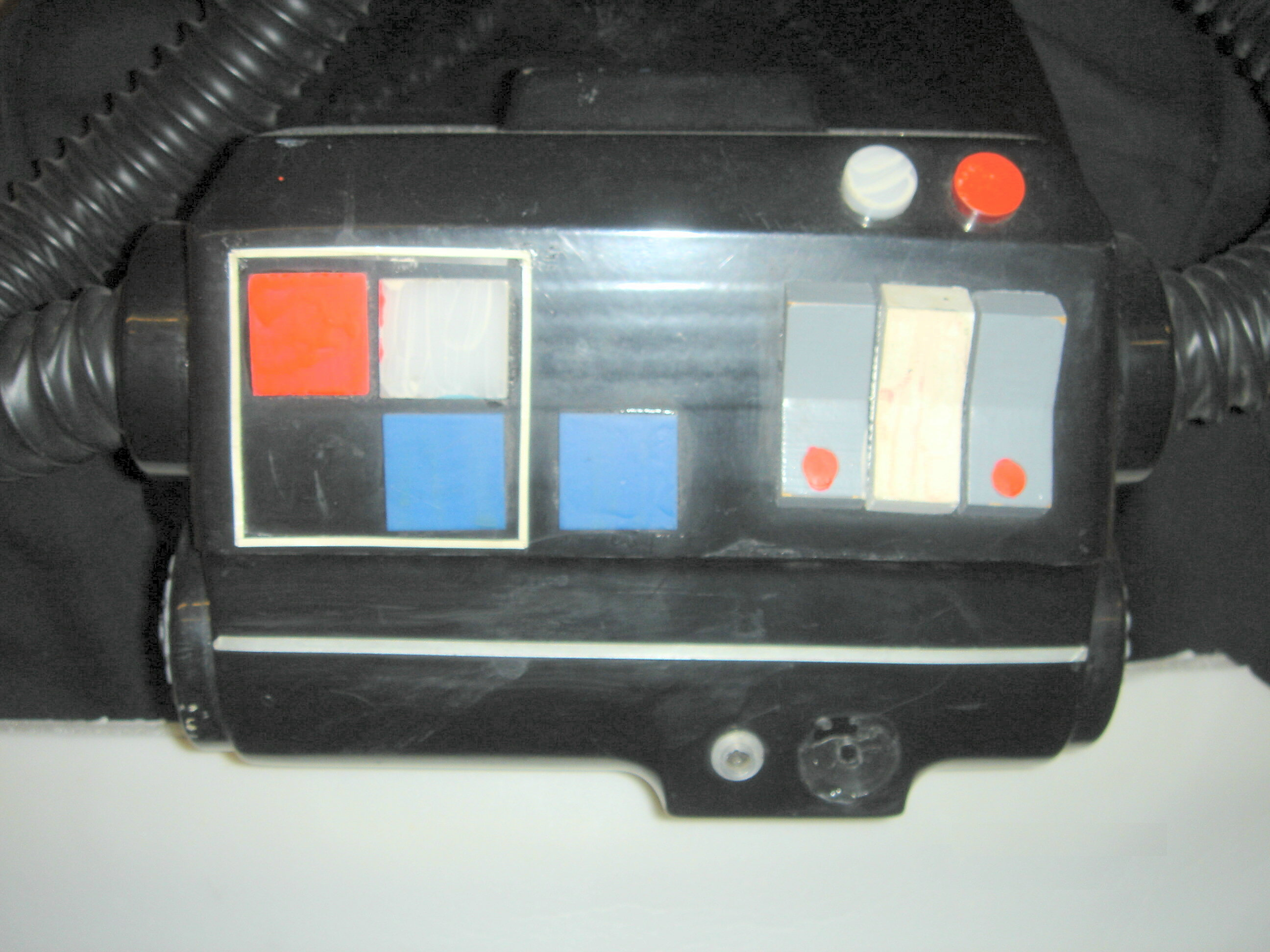 ... I can now see that as five grooves rather than four ribs. Further, I can see them faintly running behind the squares, and to the outside of the rockers. Looking back at the ROTJ behind-the-scenes shot, I can see that now as shadowing of the grooves, rather than under convex ribs. Mind well and truly tweaked to the left. Helpful. 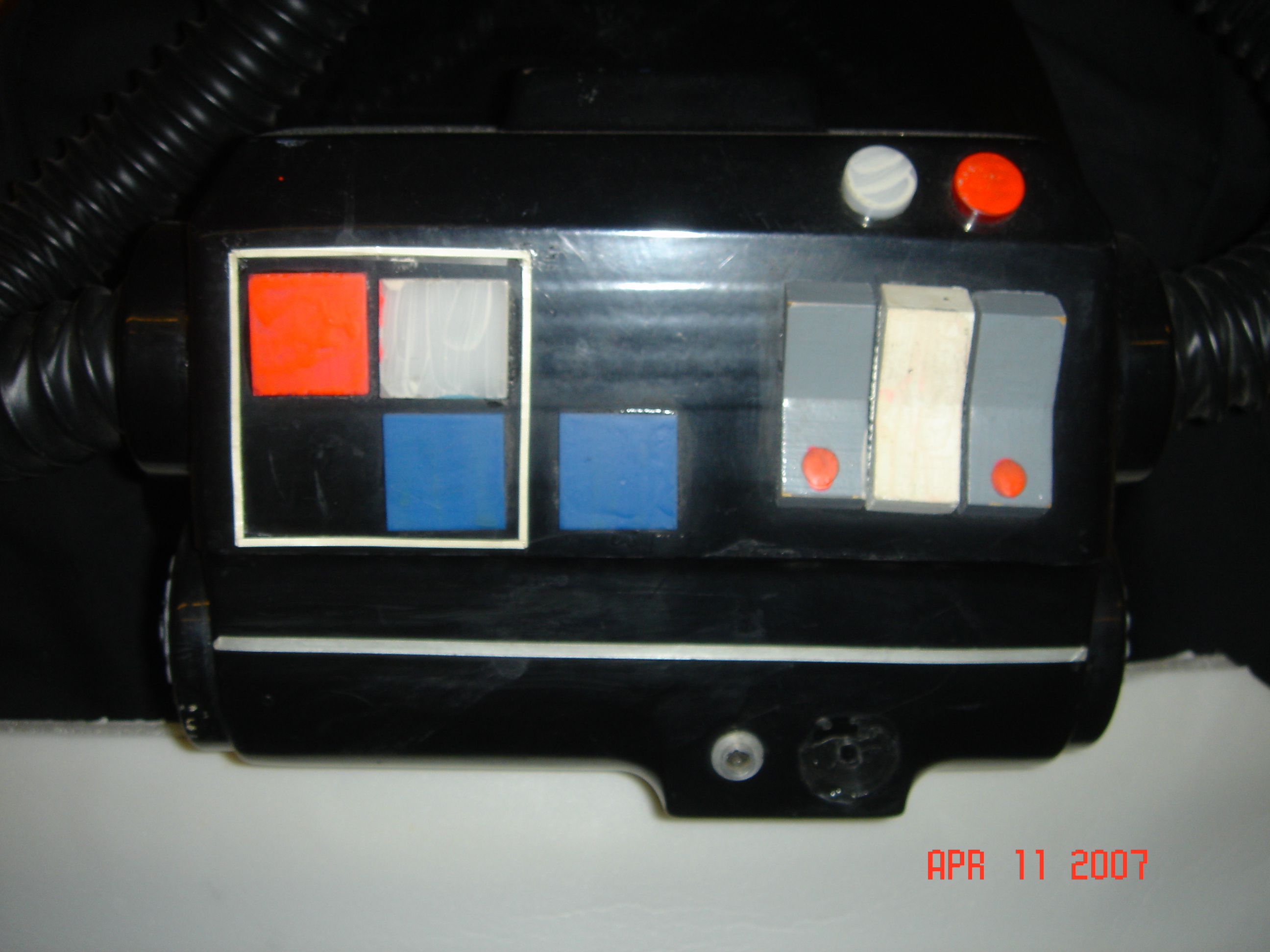 i think people only used the word ribs since that is what they look like ( stating the obvious i know )
note/ the RS "ribs" are actually raised slightly rather than flush ( not sure if they make the ribbed version anymore ? )

geordietrooper said:
don't know if it makes a difference but the pic above had the brightness adjusted by me to show more detail
original below

i think people only used the word ribs since that is what they look like ( stating the obvious i know )
note/ the RS "ribs" are actually raised slightly rather than flush ( not sure if they make the ribbed version anymore ? )
Click to expand...

Simon mentioned to me they stopped putting the detail on their TIEs because the 501st kept pushing people back on it. I posted about this in a 501st TIE page and while some folks agreed/curious about it, there's definitely folks who seem to really, really dislike it. As I manage the Blizzard Force detachment, I have to manage the CRL/Costume standards. If something like this was happening in regards to the Snowtrooper costume, I would not make it prohibited on the CRL, but from what I understand this particular thing has been shunned w/ the Pilots. However, while detachments are charged w/ creating and setting the costume standards, when it comes to actual costume approval, that authority is given to local command staff officers (GMLs) which collectively has a history of inconsistent uses/interpretations of the CRLs. So while one GML may not care or agree with someone having it, another may decide to say it's a no-go. I've even had GMLs completely ignore CRLs for personal opinions where I've had to step in. So yea not always cut and dry.

Nonsense like that are why I stopped doing anything with the 501st and Rebel Legion.
Their standards are way out of whack.