I was checking some older threads for information, but I got the impression the transistors have not been positively identified yet.
So I'm sharing what I've found recently - although these are not really transistors, but some sort of ICs I guess.
As far as I can tell it is the correct package and the correct the brand/logo, probably the device number is different/not correct.

Here's a quick comparison with the well-know picture (my washer is too big, I know): 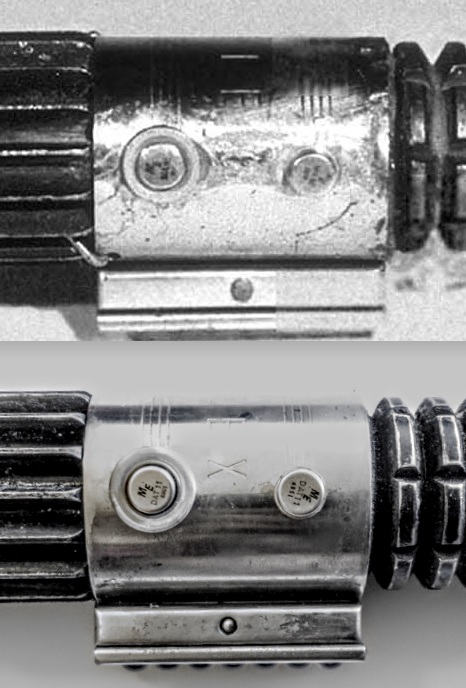 I could not find much information myself beyond what can be seen on the picture. It is a 10 pin IC, but I could not find any datasheet online. The brand apparently is Marconi. Datecodes are 6851 and 6901 and if these are the usual format it means 51th week of 1968 and 1st week of 1969

RPF PREMIUM MEMBER
You can actually see the branding quite clearly on the left one matches quite well! Very interesting, following...

RPF PREMIUM MEMBER
I've also seen other variants of the same brand out there.

RPF PREMIUM MEMBER
They definitely dented and scuffed up the cases. I think youve found the brand. There are lots of components in cans like that so this is a wonderful step

RPF PREMIUM MEMBER
This is a great find

I did some history research of the company Marconi-Elliott (ME) this is some of the business & company history from wikipedia and an article I found from 1973;

The Marconi Company was a British telecommunications and engineering company that did business under that name from 1963 to 1987.

It was derived from earlier variations in the name and incorporation, spanning a period from its inception in 1897 until 2006, during which time it underwent numerous changes, mergers and acquisitions.

In 1967 or 1968, English Electric was subject to a takeover bid by the Plessey Company but chose instead to accept an offer from GEC. Under UK government pressure, the computer section of GEC, English Electric Leo Marconi (EELM), merged with International Computers and Tabulators (ICT) to form International Computers Limited (ICL). The computer interests of Elliott Automation which specialised in real-time computing were amalgamated with those of Marconi's Automation Division to form Marconi-Elliott Computers, later renamed as GEC Computers.

Elliott Brothers (London) Ltd was an early computer company of the 1950s–60s in the United Kingdom.

In 1967, Elliott Automation was merged into the English Electric company and in 1968 the computer part of the company was taken over by International Computers and Tabulators (ICT).

In the article, the author says they are very difficult to unsolder, so maybe the ones on the prop were damaged when removed from the board, just a thought... 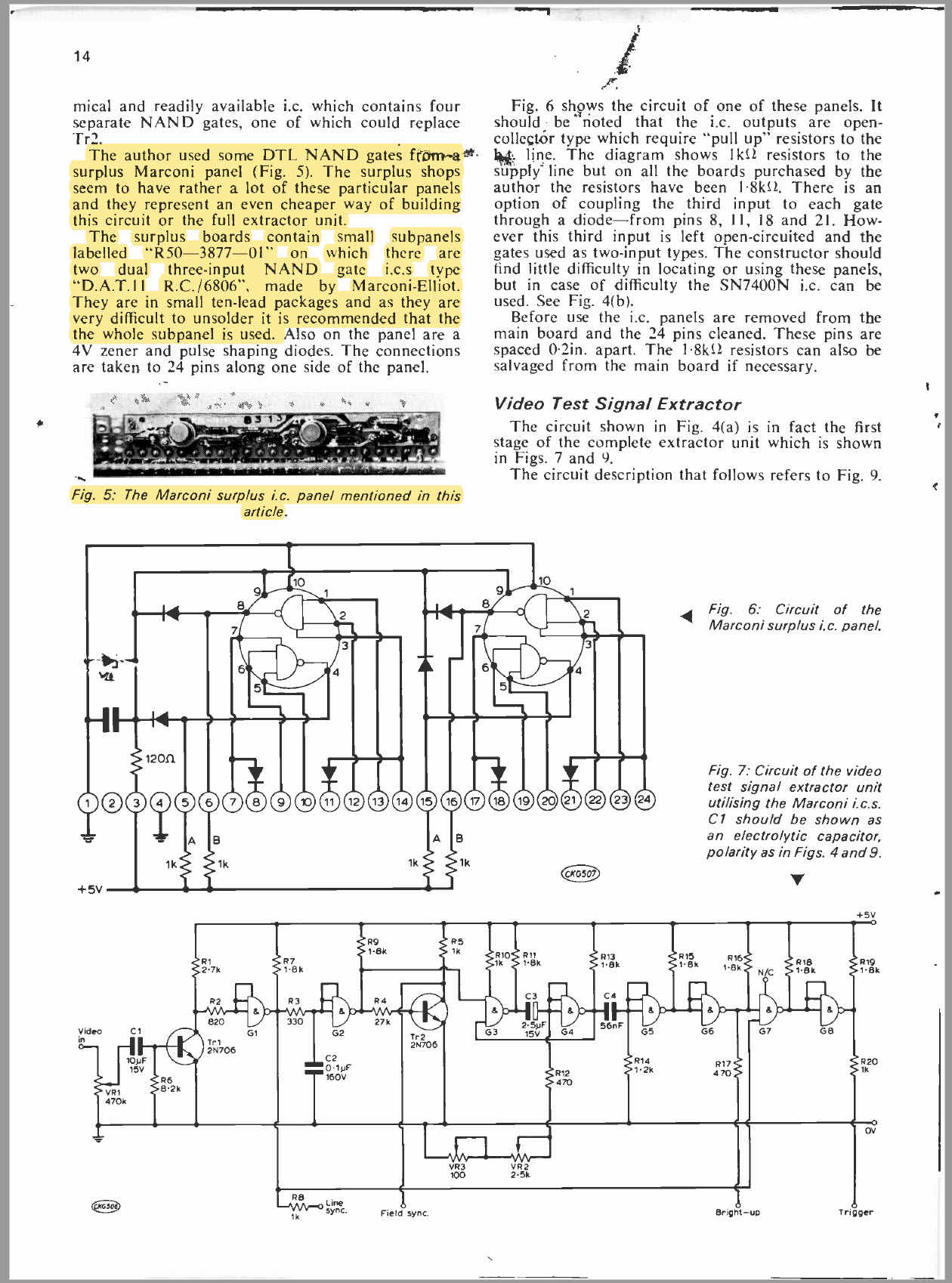 So now we know what these devices actually were! I knew somebody will dig out the missing information eventually

>In the article, the author says they are very difficult to unsolder, so maybe the ones on the prop were damaged when removed from the board,
>just a thought...

These have 10 legs each - I bet it would be a pain to de-soldier while avoiding damage to the board or nearby components, but I really doubt prop makes had any of these concerns (if they took them from a circuit), so they probably just cut the legs or the board.

In this article: http://marconiinmicroelectronics.pb...h/90170882/Marconi Micoelectronics - 1968.pdf
it is mentioned that they had a whole line of devices in the TO-5 package. On the original picture it looks more like it is "MAxxx" rather than "DAxxx" and I've seen some later Marconi ICs use "MA" prefix like "MA853" or something like that, but these were in a DIL packages.

RPF PREMIUM MEMBER
I've done some looking and it appears the company Marconi-Elliot was in charge of making quite a few pieces of kit for calculators, and some of the boards in those calculators look remarkably close to the ESB clamp card.

I think it's likely that they had taken parts from a calculator and used them for various props. There are rather large Nixie tube calculators, and have many boards and to5 package ic in them.

this is a pretty great find! Perhaps the actual source will be found soon. Other than one listing that is rather high priced on eBay I haven't been able to find anything like what you posted in the first photo available for sale anywhere. Do you have an alternate source?

RPF PREMIUM MEMBER
So the high-priced one on eBay isn't the right part number. He does have "many" available with the ME logo though.

I do also think maybe if we track down the right part, maybe we'll find something else (clamp card?). I've also been going through various radios, since that's what Marconi is famous for, and they made many transistorized versions in the 60s that could have the correct looking part.

RPF PREMIUM MEMBER
Although we do have to remember that ANH and ESB were totally different productions with no planning or continuity between them, so it's unlikely (but, as we've seen before with anything...possible...) that they used a transistor/IC/op amp from a board, and then the same board traces later on for a clamp card.

This is an excellent find, I think you've got it!

RPF PREMIUM MEMBER
The logo is very similar, but the rest of the text is not as bold as that of the props. I think that a good old photoshop weathering of these new greblies would help build the case.

RPF PREMIUM MEMBER
Yes - it appears to me the brand is a match, and these components on the prop (whatever they are) have sloppy heavy off center lettering

RPF PREMIUM MEMBER
Not to put too much of a dampener on all of the excitement, but if these are standard sized TO-5 cans, they would be too tall. It would be the same issue that we ran into with the Motorola MA series cans that we once thought were "the ones". And the same problem with the Solitrons.

Edraven99 said:
Not to put too much of a dampener on all of the excitement, but if these are standard sized TO-5 cans, they would be too tall. It would be the same issue that we ran into with the Motorola MA series cans that we once thought were "the ones". And the same problem with the Solitrons.

Agreed. The "ME" manufacturer logo is exciting, and of course the part number is always up for debate. But, if the new transistor proves to be the standard TO-5 height, perhaps Obi saber builders will need to compromise and choose between a proper manufacturer logo or proper transistor height.

RPF PREMIUM MEMBER
jd pilot offered some nice water slide decals many years ago, perhaps it’s time for an updated version.
I don’t particularly care if I use vintage (read soon to be expensive) greblies, as long as what I use on my saber looks the part.

No, they are not proper TO-5 ... definately shorter than TO-5, but taller than TO-39 - somewhere in the middle. I don't have anything to measure them, but my guess is they are 5mm tall.

v312 said:
No, they are not proper TO-5 ... definately shorter than TO-5, but taller than TO-39 - somewhere in the middle. I don't have anything to measure them, but my guess is they are 5mm tall.
Click to expand...

Can you snap a pic from this angle? 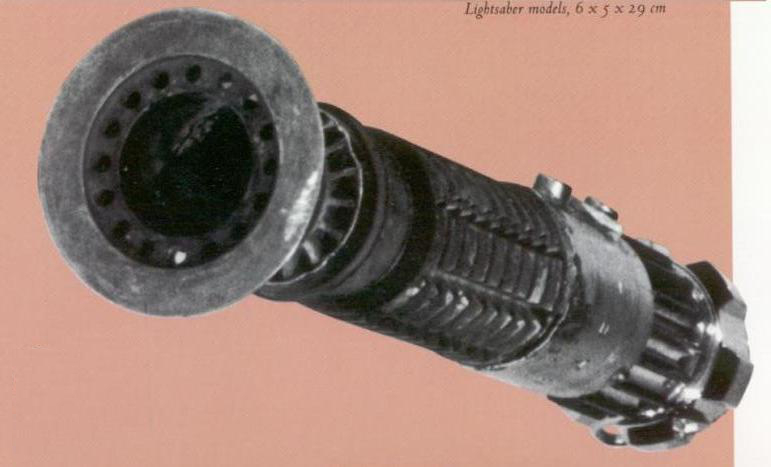 Some Thoughts on the Obi ANH Transistor Washers
2