NEW pics of the MANTIS corner.... Something lurks in the shadows.... But what could it be? It is The M.A.N.T.I.S. After five years of hunting I have the complete outfit (2 actually). Still have to add some pieces on, boots etc....also, need to shave 4 inches off this mannequin....decorate display with lots of making of info and viola....but here is an in progress sneak peek. Base of Operations: Port Columbia, Ca, near Los Angeles

Powers/Abilities: The M.A.N.T.I.S. suit not only allowed Miles to walk again, but also granted superhuman strength, speed and agility. The Chrysalis is not only a top of the line car, bit can also fly like a helicopter.

History: Dr.Miles Hawkins was a genius scientist who had founded his own company, Hawkins Technology, Inc, and was going from strength to strength. That was, until a bullet from the gun of a corrupt cop in the pay of another industrialist left him paralysed from the waist down. Left in a wheelchair, he worked with his friend John Stonebrake on developing the Mechanically Augmented Neuro Transmitter System (M.A.N.T.I.S.), an exoskeleton designed to let him walk again, by using headgear with transmitters which allowed the brain to send signals which bypassed the spine. However the first tests proved it could do more than that: it was so powerful that it made the wearer virtually superhuman. Taking a high-tech car, the Chrysalis, which he had originally designed as a prototype for the police, Miles Hawkin decided to become a vigilante, ensuring justice for those otherwise denied it. He worked from an underground base beneath his coastal house near Port Columbia, assisted by John and by Taylor Savidge, a bike courier who worked as his legman. Initially pursued by the police, his identity was discovered by Lieutenant Leora Maxwell, the cop in charge of the investigation. Instead of exposing him, she became his ally, working with him to bring criminals to justice.

M.A.N.T.I.S. had several adventures, including a trip to the future, but eventually he was killed by an invisible Tyrannosaurus Rex.

Comments: Played by Carl Lumbly. The show aired for one season of 24 episodes, plus a pilot episode. The show was originally titled Mantis, but the legal team at Fox discovered there was a Marvel comics character by that name, and insisted the show change to M.A.N.T.I.S. 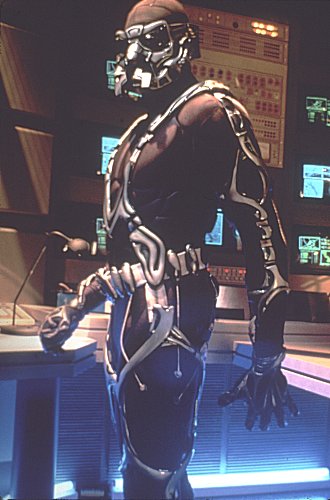 You forgot to mention he is the voice of The Martian Manhunter on JLU.

Crap, I just realized I have some leg stuff on backwards...this thing is like a jigsaw puzzle.

I liked the show but I thought the end was a waste.

RPF PREMIUM MEMBER
That actually does look really cool, despite the fact that I have no idea who or what the hell a M.A.N.T.I.S. is.
D

Looks very cool. Glad you were able to pick that up.

RPF PREMIUM MEMBER
Once again Dave lives up to his slogan.

Another cool piece, Dave. I don't think Mantis stuff could find a better home. Glad I got to see these last week. Congrats....

M.A.N.T.I.S. had several adventures, including a trip to the future, but eventually he was killed by an invisible Tyrannosaurus Rex.
Click to expand...

Are you serious about the T Rex? :lol
J

i dont ever remember seeing the end episode? are you serious?
D

The M.A.N.T.I.S. writers offices on the Universal lot were demolished during the production of the series in order to make space for the "Jurassic Park" ride.

It looks great on a mannequin, just let me come by & fix those "at attention" arms for you.

Come fix dem arms....don't want Scott to go all Brokeback on my mannequin~

The last two episodes were unaired but recently discovered by a videophile. I have not seen them myself yet (they are being sent to me) but I hear the last one was phenomenal. The show was cheezy at times but for 1994 not too bad. And written by ba pre-spidey Sam Raami no less.
S

kick ass as allways mantis have allways been a fan of the show glad someone has finally made a replica of a unsung hero, ive seen the last ep the invisible T-rex one tis a very sad ending to the series indeed from start to finish, man i wish someone would do some replica kits of the head gear i would love to have one lol, ill have to get off my lazy ass and try and sculpt one.

i have three vhs tapes of the series lol i think i missed an ep or two ill have to see lol, bloody good series, also incase anyone is wondering the actor who plays the mantis also plays a fav alias character Marcus Dixon

man i miss this show

That is actually the screen used suit and headgear you see pictured....also have the pilot episode headgear as well: