Between other projects and paint-ups, I've been quietly working on this as well. I was shooting for a hybrid elder, leaning more toward P2, but with some AVP traits as well. He's a true closed mouth with the fully closed jaw as well. I decided to inset the lower manidbles under the jowl flap rather than attaching them right where the flap and mandibles meet. I think the saggy flap makes him look a bit more aged and it will also allow for a non-noticable attachment point for the lower mandibles. I'm giving him extra long canine teeth and will ultimately have a set of etched tusks to offer with him. I have a couple other projects to wrap up for people before I get around to molding it, but I'm shooting for sometime in a couple weeks as far as molding goes. Lemme know what you think.

Well, for those who didn't know, the head shown in the above photos was killed by Mother Nature in a senseless act of violence! LOL An early April heat wave that brought temps around 110 degrees for about 4 days caused a complete collapse of that head. Due to the back-heavy nature of the shape and no real support for that weight, the back broke off into about 4 big pieces, which in turn, allowed the front to fall off into another 2 or 3 pieces. Needless to say, I was just sick about the whole thing and didn't even want to look at the mess for almost a month. So, I started the rebuild about a month ago and finished it last night. Fortunately, I have a spare refrigerator in the garage, so it's been refrigerated since being put back together and put back into the cold after each work session. Put in quite a bit of wire to act as "rebar" for the support issues in all the break points.
On the down-side, I felt the first version was my best work to date... On the up-side, this one is pretty close to that one and I did make one "improvement" that I'm much happier with in the second version. I brought the jowl flaps in right against the mouth, which should alleviate any possible molding issues in the mouth.
Anyway, it's refrigerated now until I can get at molding it this week. I only opted for 1 photo as I wanted to make sure once it was done, I got it back to the cold ASAP. I just envisioned me shooting a few extra photos and it starts to break apart on me again so I could get some live action shots of it falling... 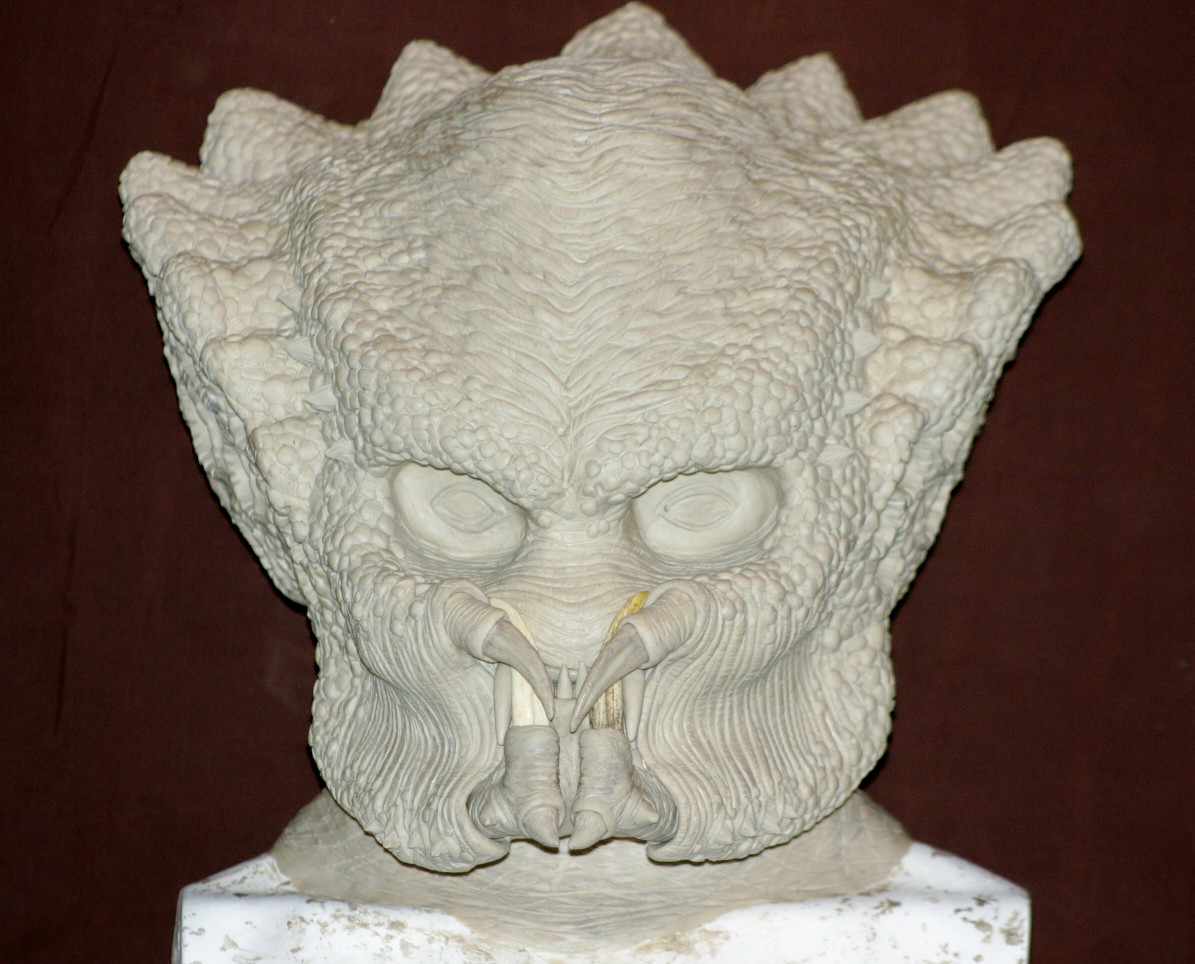 That's awesome...loving all the closed mouth designs. This one is great for anybody wanting to do an elder suit
U

Sweet work scott, i hope this means you have the head sculpting bug

Usurper said:
Sweet work scott, i hope this means you have the head sculpting bug
Click to expand...

Thanks guys... Lee, as a matter of fact, I DO have the head bug. P2 is next on the list, however as far as sculpts go, one smaller project (retooling my AVP shins... molds are shot) and one much larger project (hmmmmmm....) are in line ahead of it, so it will be a while off in the distance...
U

cool look forward to it

larger project hmmm, so the spirit world was correct then , as i know what ya doooooooooooooooing

ptgreek said:
That's awesome...loving all the closed mouth designs. This one is great for anybody wanting to do an elder suit
Click to expand...

Awesome work Scott!!! Great to see some new work and variety of preds continue to be done, looking forward to the larger project!!!

Awesome looking sculpt, can't wait to see a finished one!

Your sculpt is kickass Scott......like the detail.Cant wait to to see one all painted up.

Stupendous detail work! Just wondering what material you are using to sculpt with?

TK9805 said:
Stupendous detail work! Just wondering what material you are using to sculpt with?
Click to expand...

Thanks all... I use Klean Clay regular firmness for everything I do.

Great attention to the details, Scott . I like the mix of predators u got going on there. The mouth details is awesome man. Ceasar.

Thanks all... Since you guys seem to be digging on the detail, I figured I'd add a close-up of the forehead, which really shows the detail that the other photos don't show... Didn't realize you guys would be that into the detailing so I didn't add it earlier, but if you want detail, here ya' go!

Mannowar said:
Thanks all... Since you guys seem to be digging on the detail, I figured I'd add a close-up of the forehead, which really shows the detail that the other photos don't show... Didn't realize you guys would be that into the detailing so I didn't add it earlier, but if you want detail, here ya' go!
Click to expand...

God, you do great head!
You and Lee are two of the best!

So, what is the bigger project? Hmm?