RPF PREMIUM MEMBER
Looks like we got some new Clone Trooper Armor. They seem to have made it more real world applicable in terms of fit. They have touched every piece of the armor and made slight changes. The easiest thing to point out is the new belt and changes to the DH-17. You can also see how the adjusted the fit of the thigh by shortening the top section and splitting the medial side of it as if it clamps together.

Why they made these changes instead of using old clones? I dunno for cosplayers or a new TV show maybe....either way now there is an entire new set of Clone armor to make along with a new DH-17 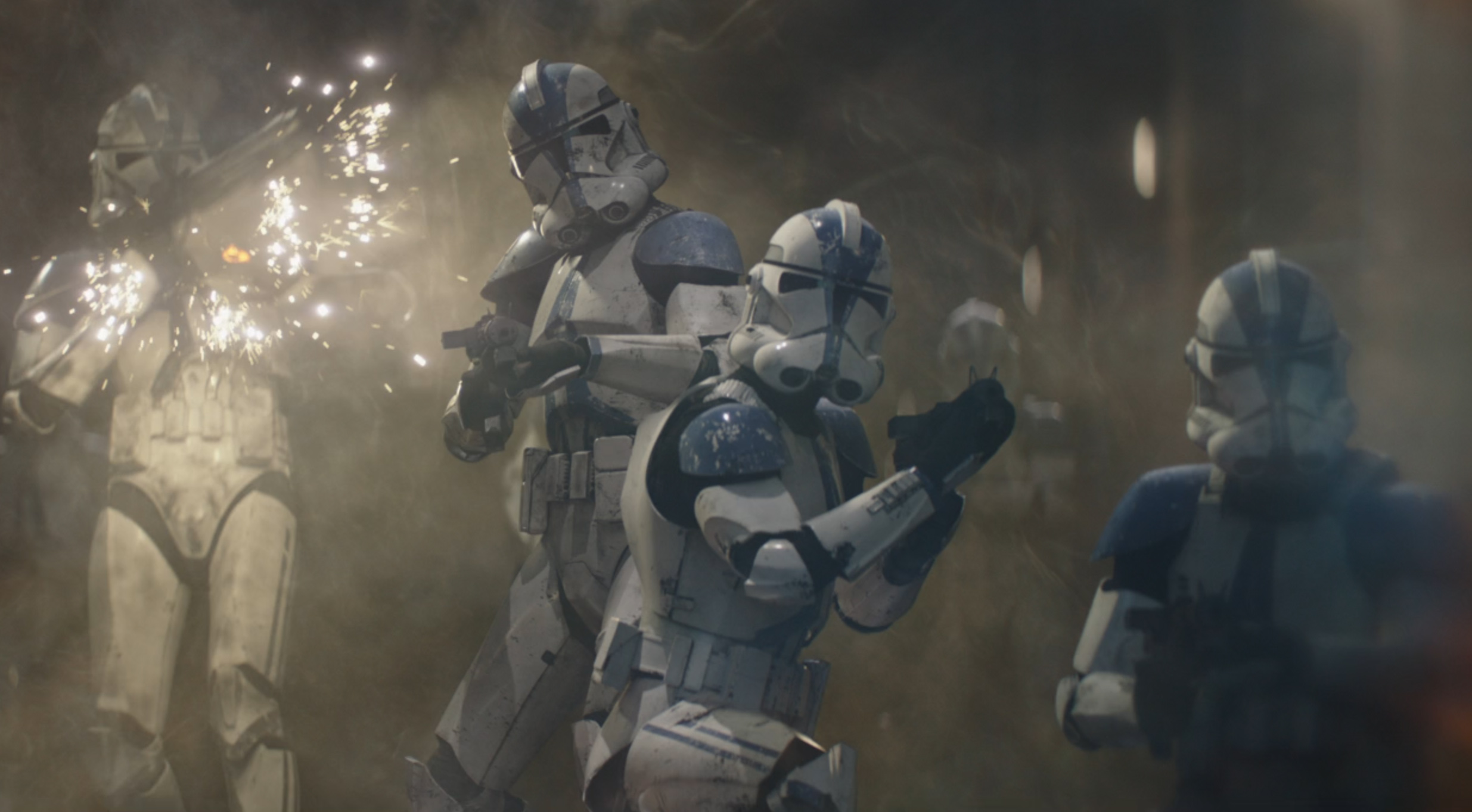 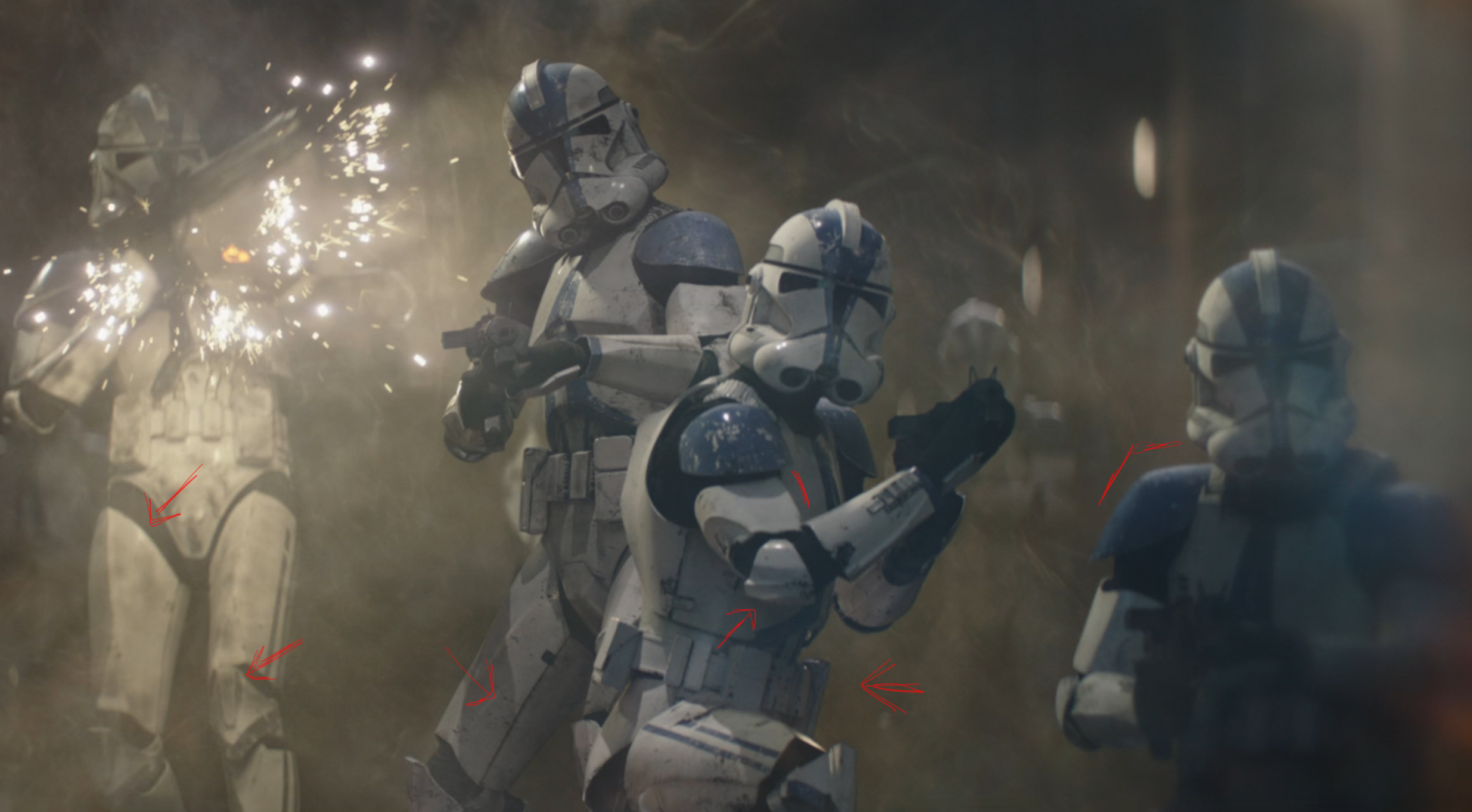 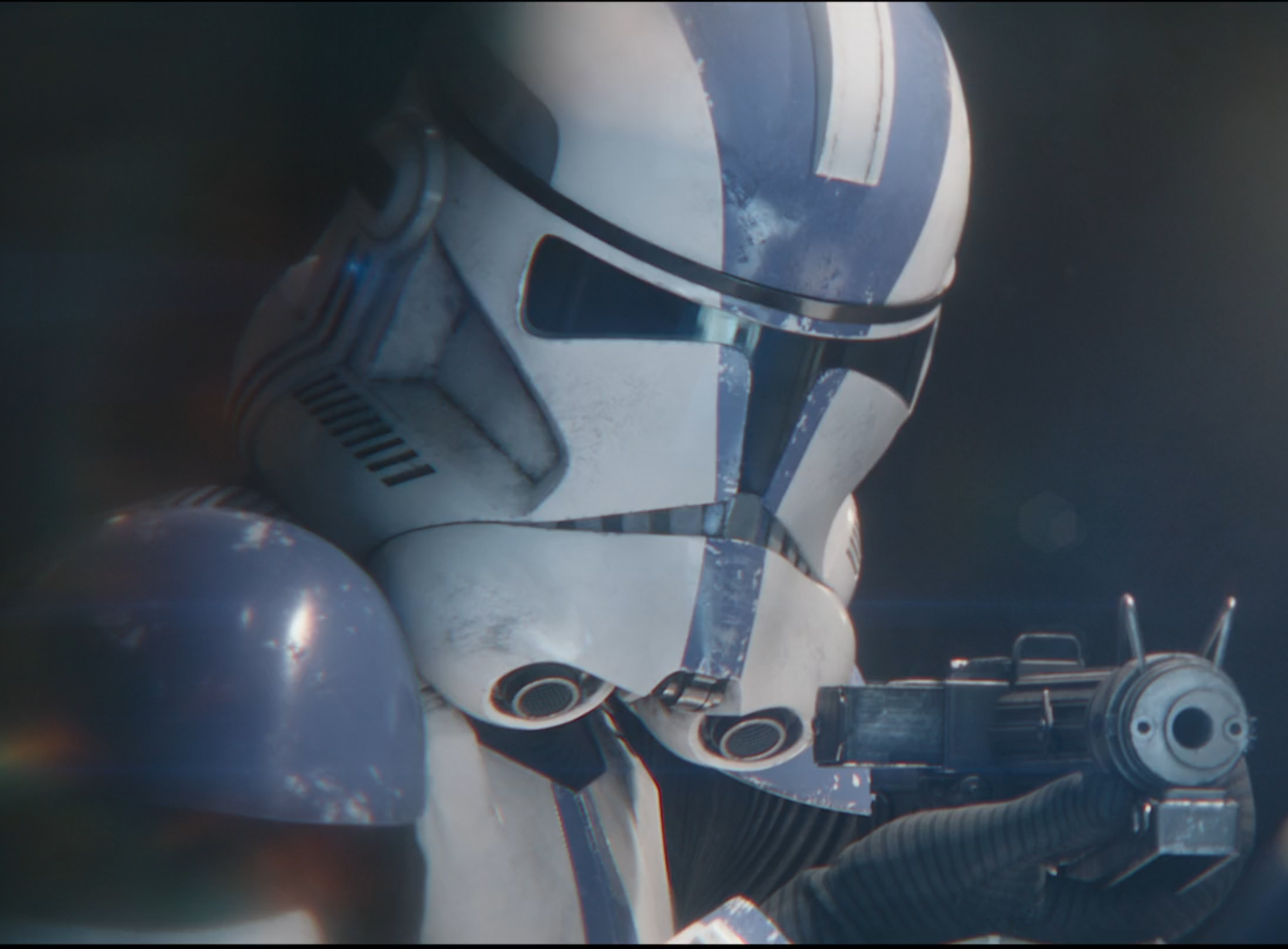 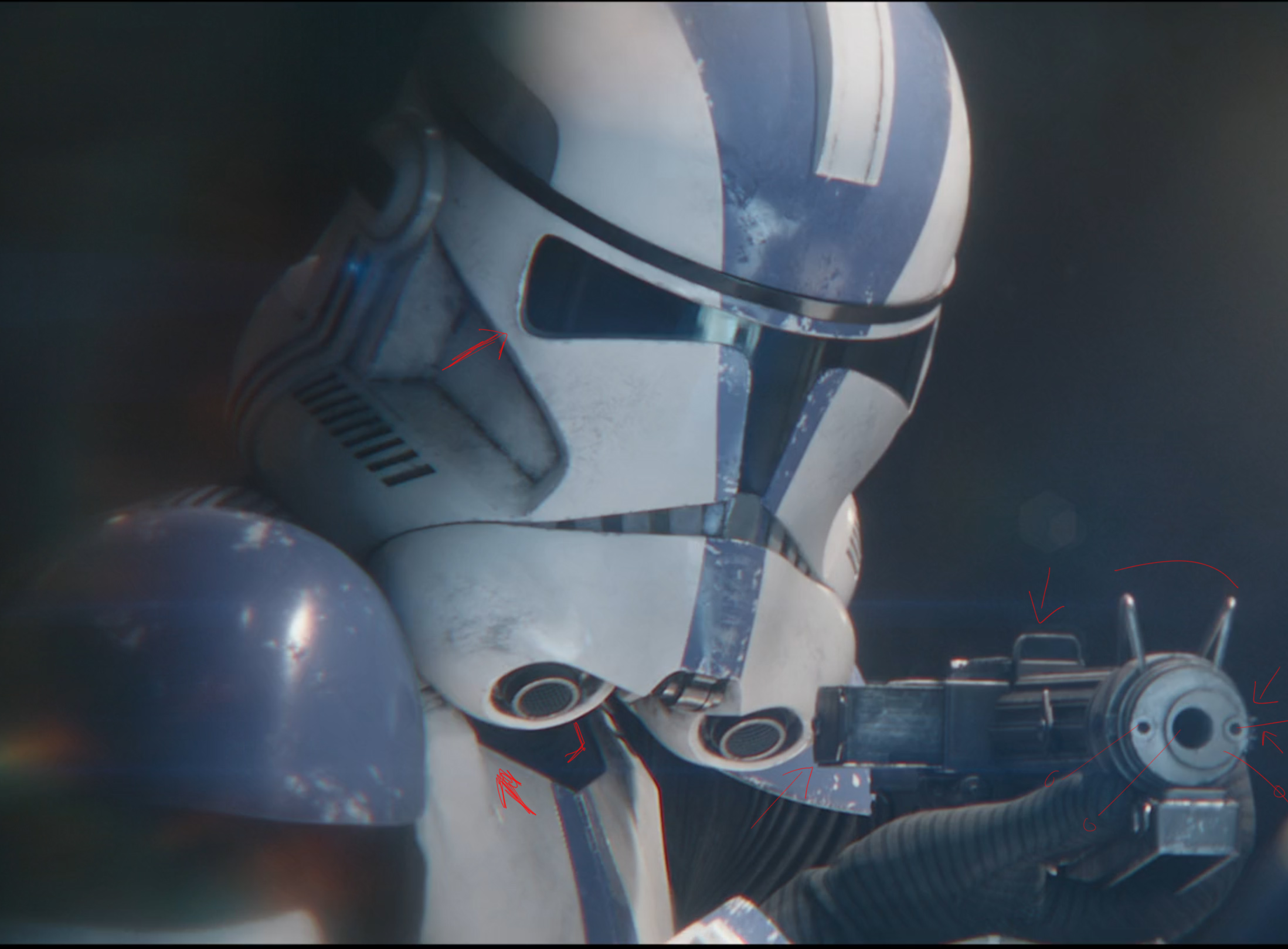 RPF PREMIUM MEMBER
My guess is this is the result of having actual people in suits instead of CG troopers? I am woefully uneducated about Clonetrooper armor though, so I could be saying nonsense.

RPF PREMIUM MEMBER
these are still CG look at the hand for example. You can also see the armor clipping in some shots. This could be what they 3D print and use for real actors in the future though.

RPF PREMIUM MEMBER
It's been over 24 hours since the episode came out, so changing the thread name.

RPF PREMIUM MEMBER
Looks like the helmet vents are actually cut into the helmet like the Rogue One Stormtrooper vents--not blue vinyl stickers.

RPF PREMIUM MEMBER
oh yeah, they sure did.

RPF PREMIUM MEMBER
They still kneel like CG clones where the armor just disappears into the other piece.
And then they go and add a kneepad under the knee armor...

RPF PREMIUM MEMBER
That's a good solution to not have to deal with as much cloth deformation. Here are a few more pics..

Comparison to the original 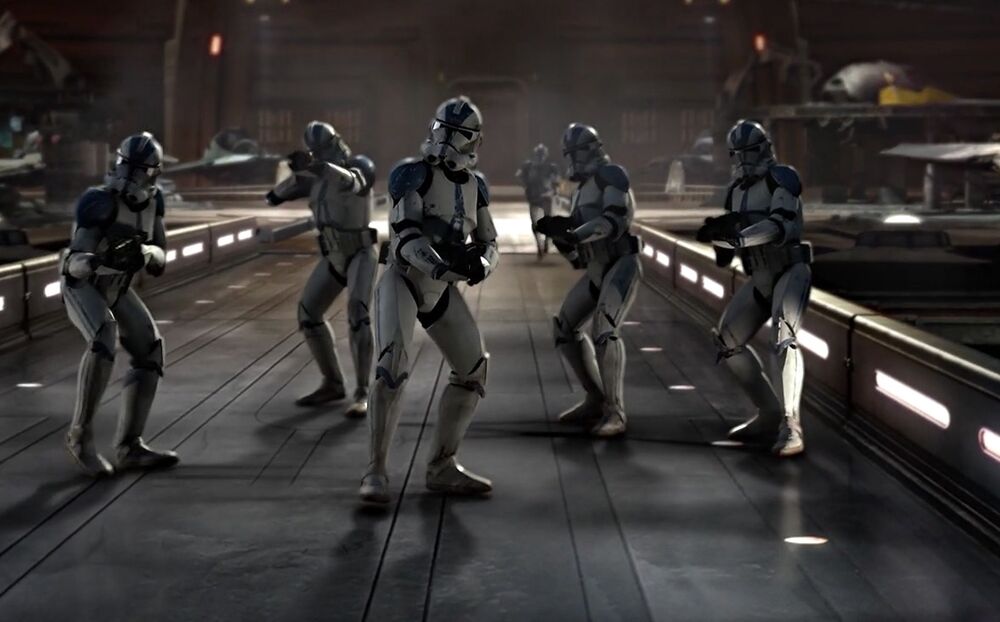 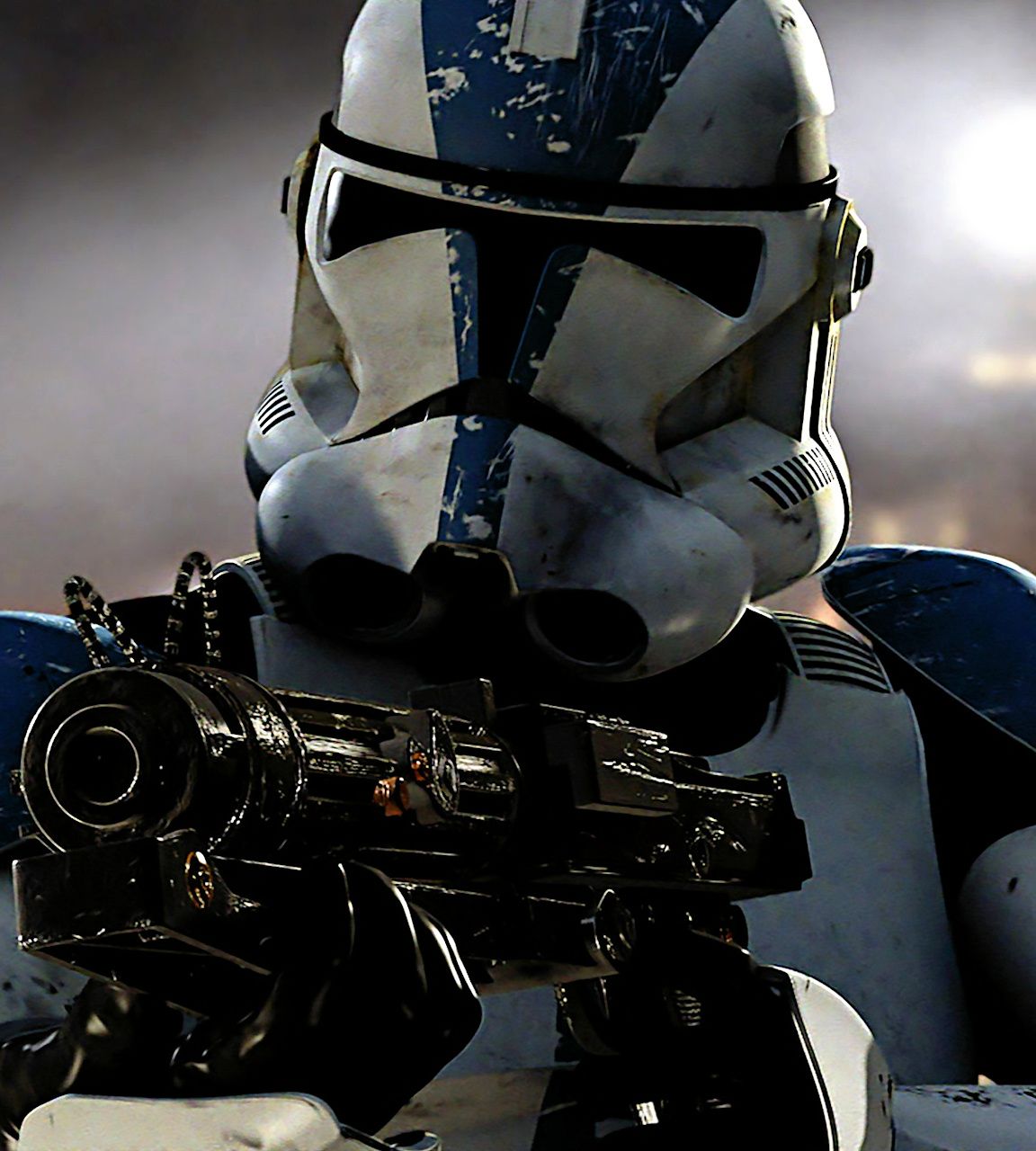 I don't think the shoulder bells necessarily have a different curvature... but they are "trimmed" differently, so they are wider and shorter than before. The bottom used to curve inwards and overlap the bicep armour: it doesn't on these troopers.

Overall there is more space in-between armour pieces. The crotch armour is narrower and longer in the bottom.

Weird that the thighs got a seam-line and clip but the shin armour didn't. The shin armour's narrow opening on the bottom is a big difficulty for people dressing up in these costumes, so a shin piece is often put together with the scallop in the back being a separate piece.

The helmet still has a neck ring: it was difficult to see but I think it could be wider and less pronounced.
Last edited: Feb 4, 2022

The elbow pieces are so different. Why? This really leaves me scratching my head. At first I thought maybe it was to make sort of idealized elbow piece, since TCW clone model has a very different elbow piece. But then I remembered that when they updated to the Phase 2 armor in the show, they changed the elbow pieces to match the films.

Rant:
Recessed tube stripes: that is some ********. In ROTS, the stripes are clearly supposed to look painted on. On some clones, the painted stripes are chipping, and on many there is at least carbon scoring applied flatly on top. Or in the case of Cmdr Gree: no tube stripes at all, with instead painted stripes on the back of the helmet — which are also chipping.
Licensed replicas have been made of several clone helmet variations, so changing the shape and colour scheme of the helmets afterwards serves only to devalue those replicas IMHO.
This is not the same thing as introducing the 3D-modelled Rogue One Stormtrooper helmet — where the purpose was to add detail and precision compared to the original casts and recasts that are more or less wonky and asymmetric to begin with, thus leaving a lot of opportunity for interpretation of what McQuarrie/Moore could have intended.

Another weird detail is that the spaces between the "teeth" on the BOBF clones are solid. Now there are some images of ROTS clones where that was the case, but I had always thought those were lower-resolution models for use in the background to save on rendering time. The licensed replicas have mesh.
Last edited: Feb 4, 2022

RPF PREMIUM MEMBER
I really don't like the new belt, it's way less interesting visually. Is it new shoulder pads or do you think the helmet is also smaller? maybe more slim slightly.

The old CGI armour had an issue with the larger belt boxes clipping into the lower edge of the chest armour. But I think they could have just addressed that issue and left the rest unchanged.

RPF PREMIUM MEMBER
I don't consider myself to be a purist, but this one kinda got to me.