New Challenge - Armor And Kit For A Chinese "predator Offspring

This will be a good challenge.
The place of start is China
The time is between 1680- 1520 BC.
The armor and kit and weapons are made partly on earth partly in a ship of a predator. The one who carries them will not be a 100% predator. For that reason the weapons and armor have to have something of both.
A few thing are already known.
* Metal used - partly bronze partly iron mixed with predator metals. (There will be some rust visible)
* Gauntlets - haven't got the retractable blades. But will be a half-open holder of 2 bronze knives (different size probably)
* In stead of the plasmablaster will be a weapon which shoots very small spirally formed arrows (they are around 6 cm long) This arrowshooter will be on almost the same place as the plasmablaster.
* predatorcomputer will be very basic. No bomb incl.
* something of a spear or half sword (not sure about that)
* laserguidance (not sure) Probably linked with the arrowshooter

The armor
That will have P1 parts which will be on Chinese level (bronze will be used) bio is Uratz which will be adapted. Also would there be a link to the movie Nausicaa-of the valley of the wind.

I already began to write a story which will be on in time. 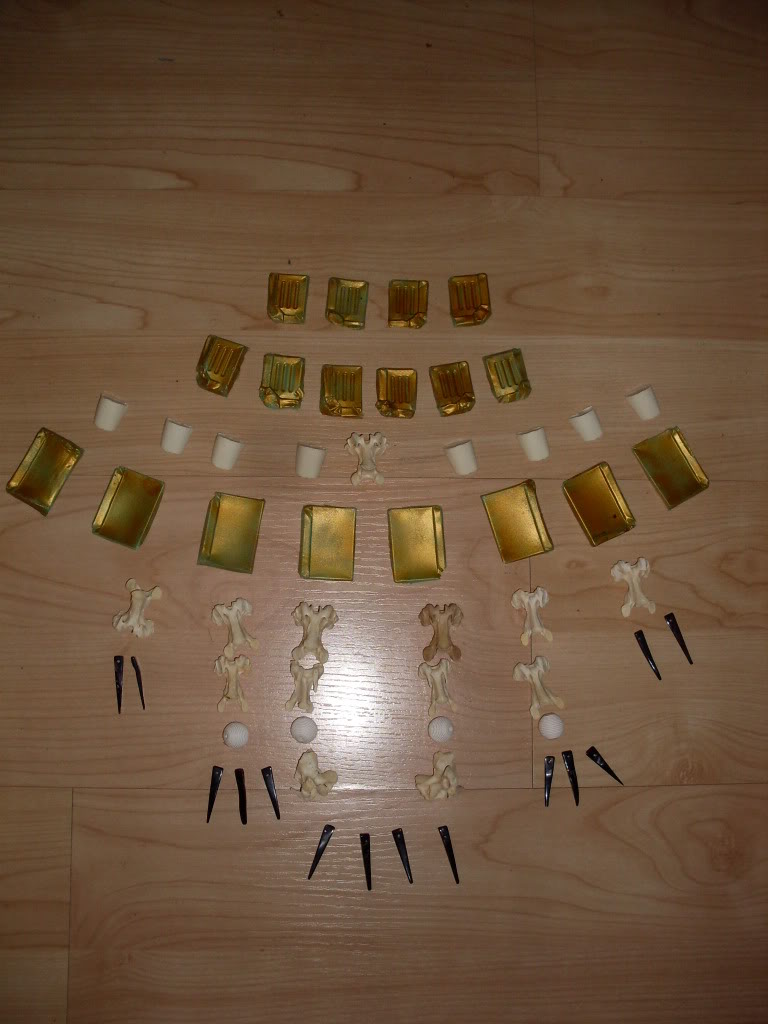 I found some little bones and made some latex parts to make the necklace for the new predator. I only have to link them together. The 9 pieces at the top will be around the neck of the predator and the ring below that will also be linked to the uppersides of the chestarmor. Possibly I will put a few skulls on the necklace.

This bio I'll use. Thankx Uratz. 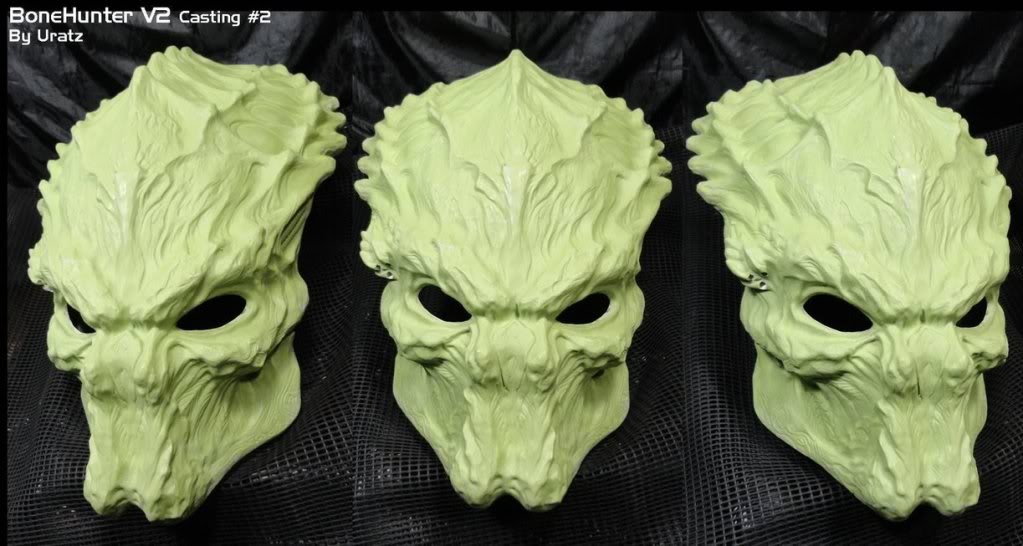 The following colour pattern I will use. The colours of the ohmu. The bio and chestarmor will have these colours. The other armor will be a shade darker. 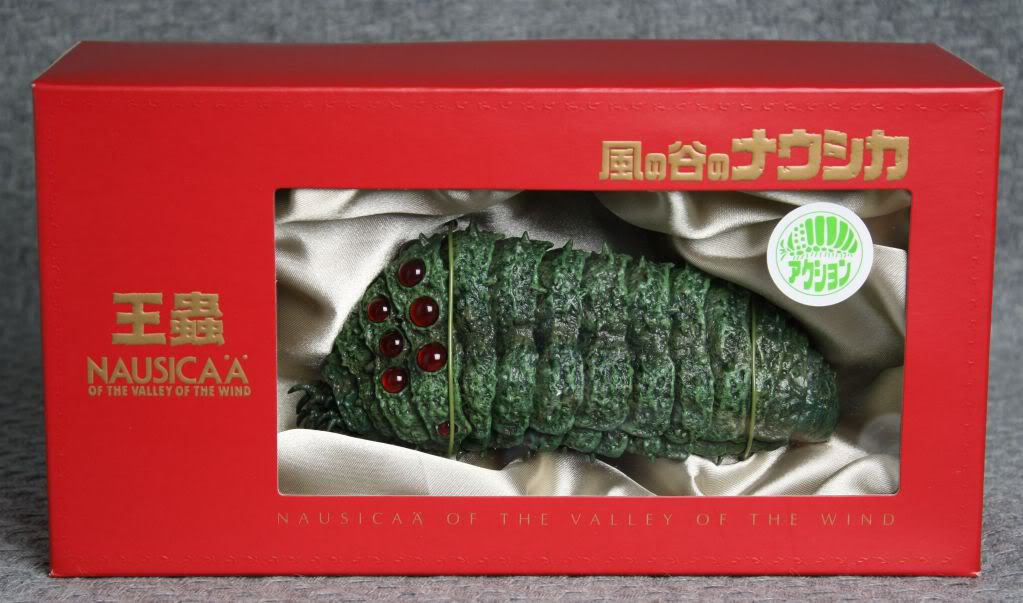 At last the statue of the ohmu is in.
This statue differs from the first one because the eyes are blue in stead of red. 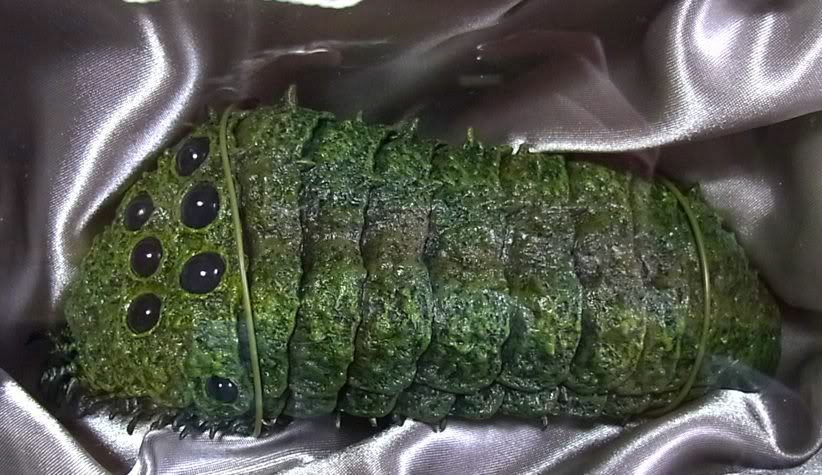 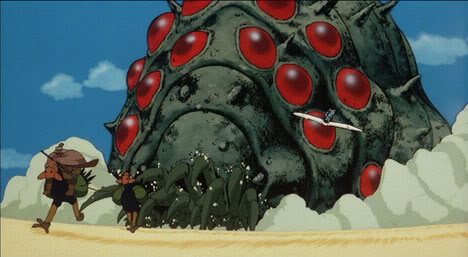 There is a sligth change in plans. The 2 goth shoulder pieces will not have the standard tusks on them. But I will paint old chinese paintings on them. Possibly 1 with a tiger and a sabretooth and the other possibly a female hunter. The sides of the shoulderpieces will be green metal. The same thing will happen to the leg armor, codpiece, and feetarmor. I'm planning to make the tattoos on the bio more visible, and maybe it will become also green metal. 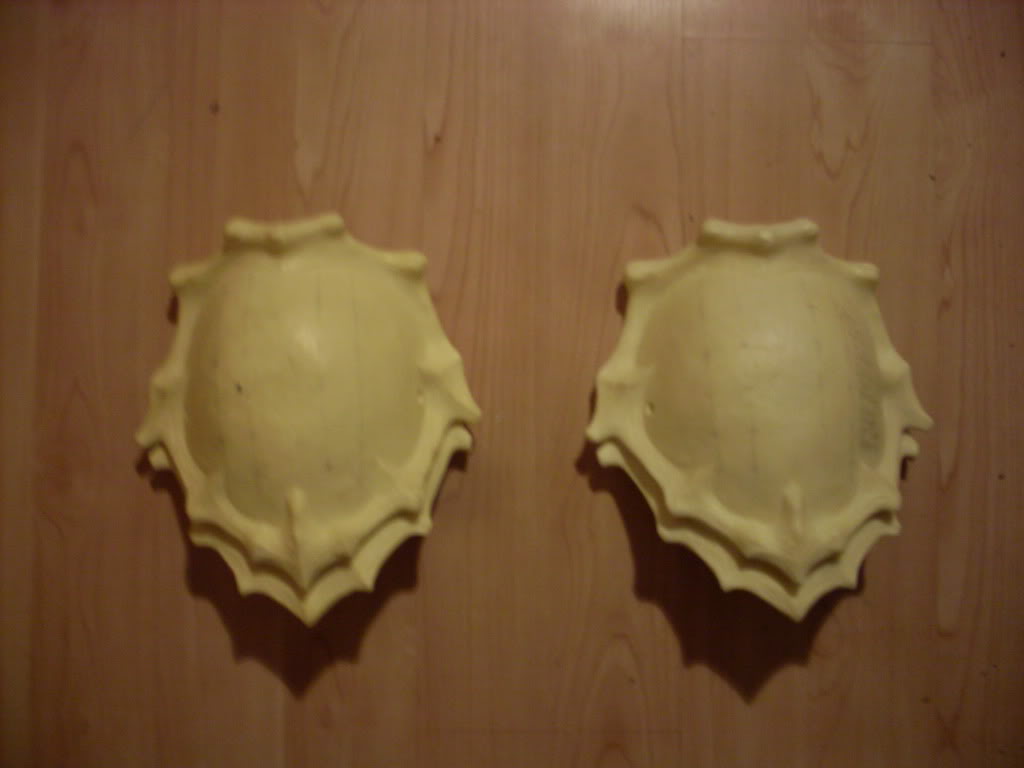 The legarmor I will make myself. I'll use a shell of a crab as template for a mold. It looks like a legarmor but I will have to cast it several times to get the shingle look like the originall one. 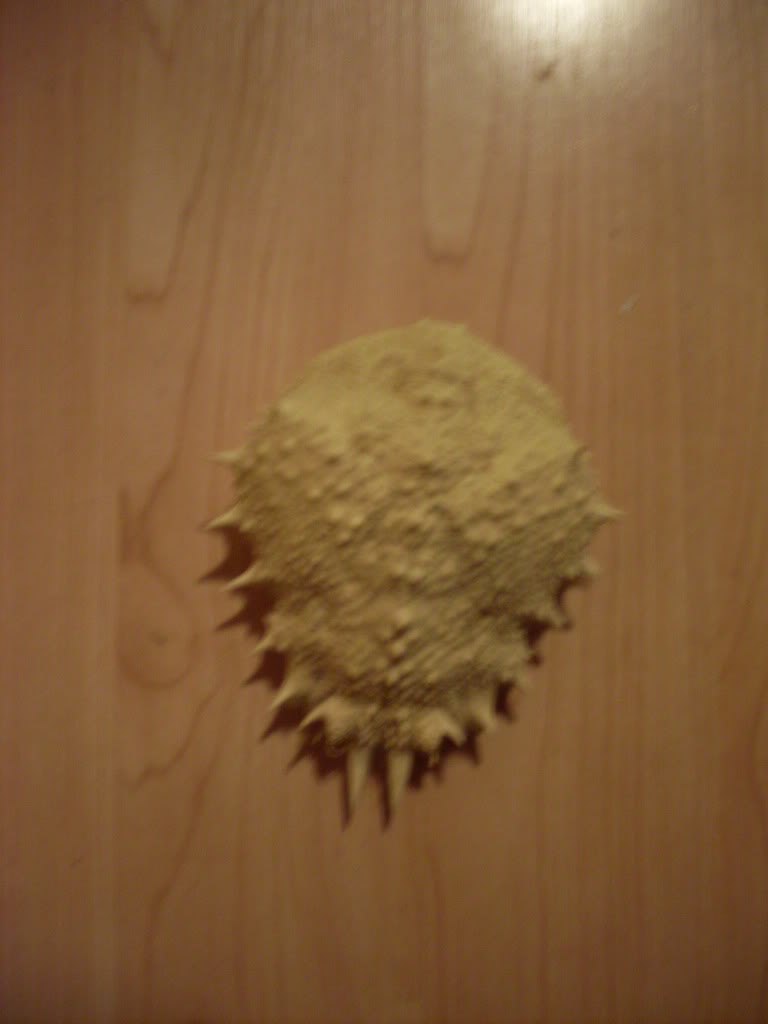 The alien tips will be used as weapons. I only need 4 tennisballs, a good piece of black thick tread and a few funny blunt pieces of jewelary. And I will make a kind of bollas of them. I know that our Mexican fellowhunter know precizely what I mean.
The tusks will be used in the collar and in the armor of the legs and the gauntlets. 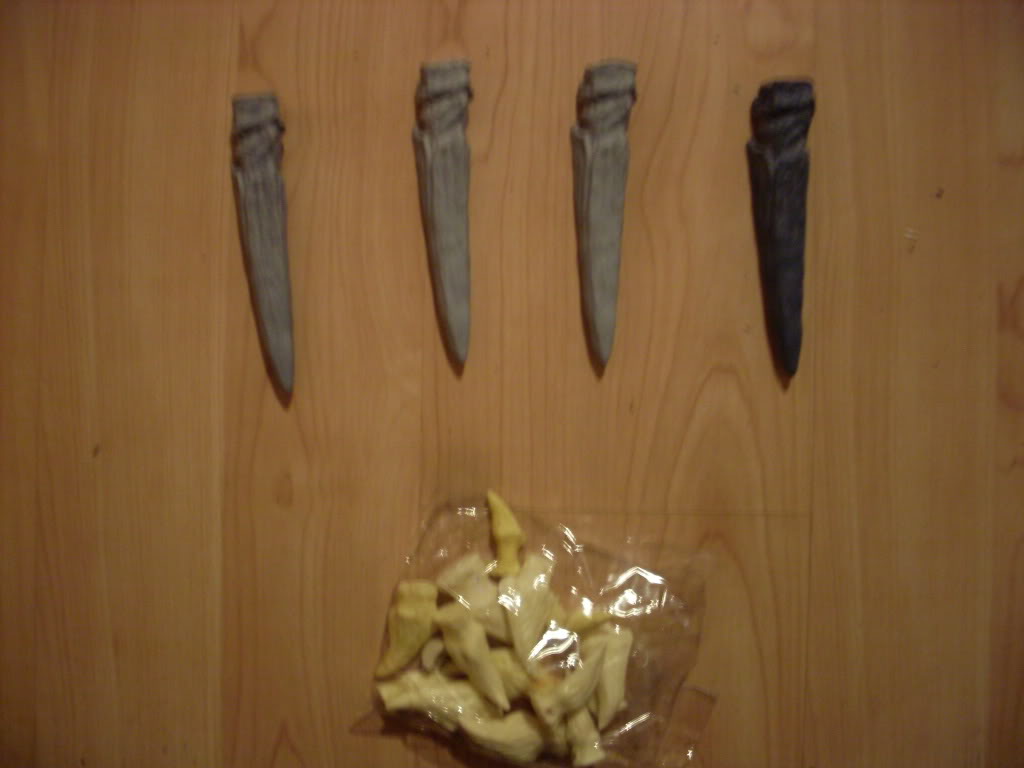 The shoes what I'm going to use are leather ninjashoes 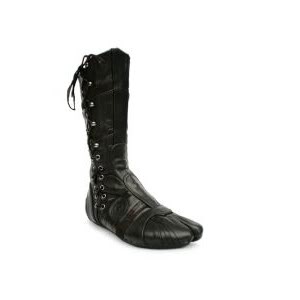 The standard P1 codpiece I'll use. And I found a funnyblue coloured muscleshirt (Bananaman!!). I have enough leather pieces to make a loincloth. And some romancenturion look-a-like straps for the loincloth.

The weapons will look like the swords of god of war. And maybe a big blade axe.
Still thinking about the skulls... 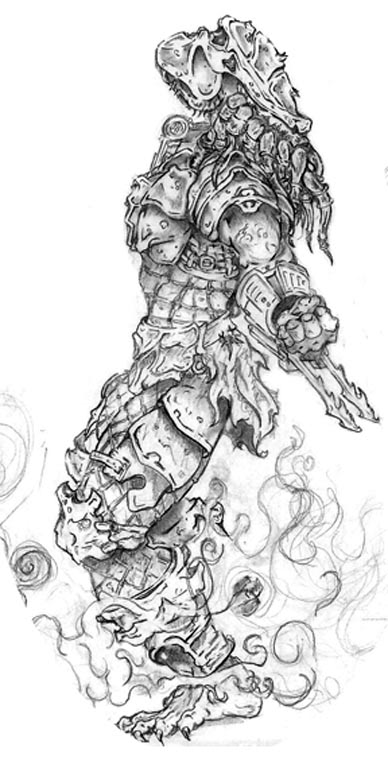 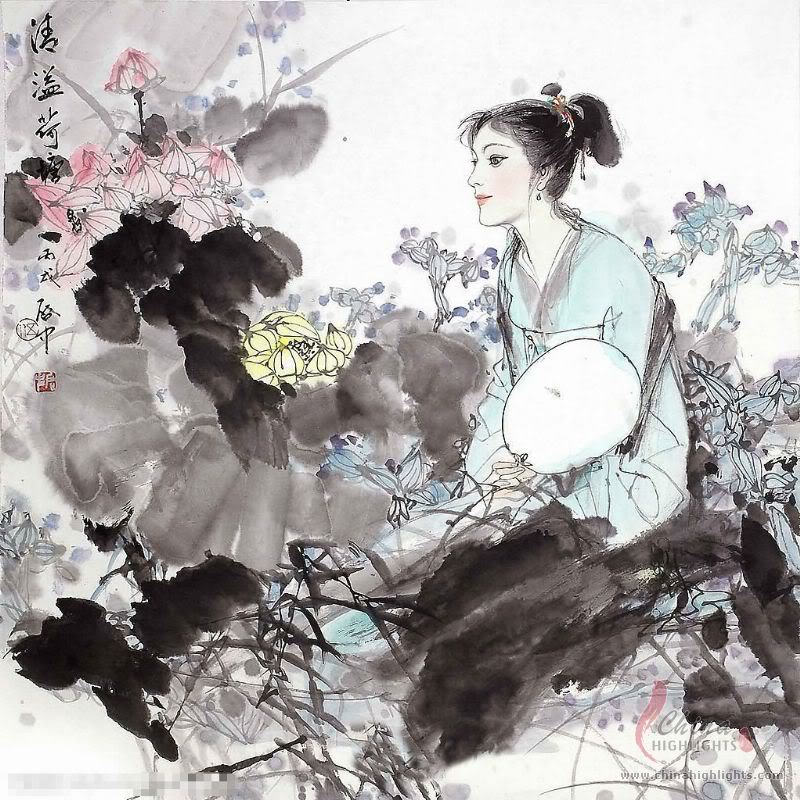 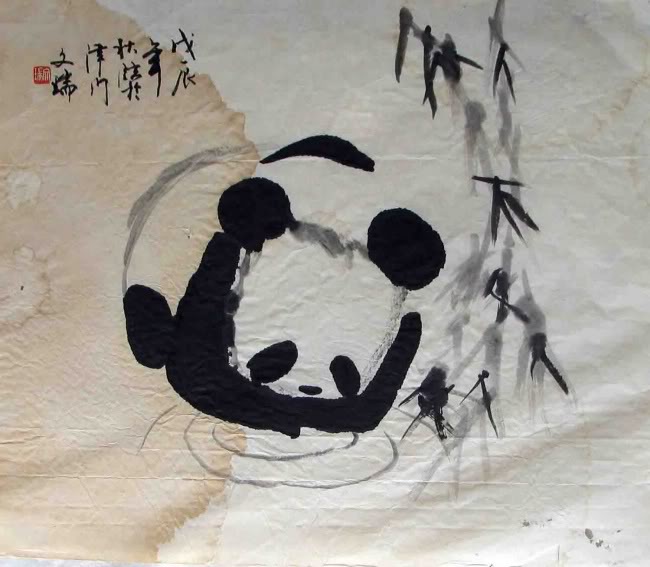 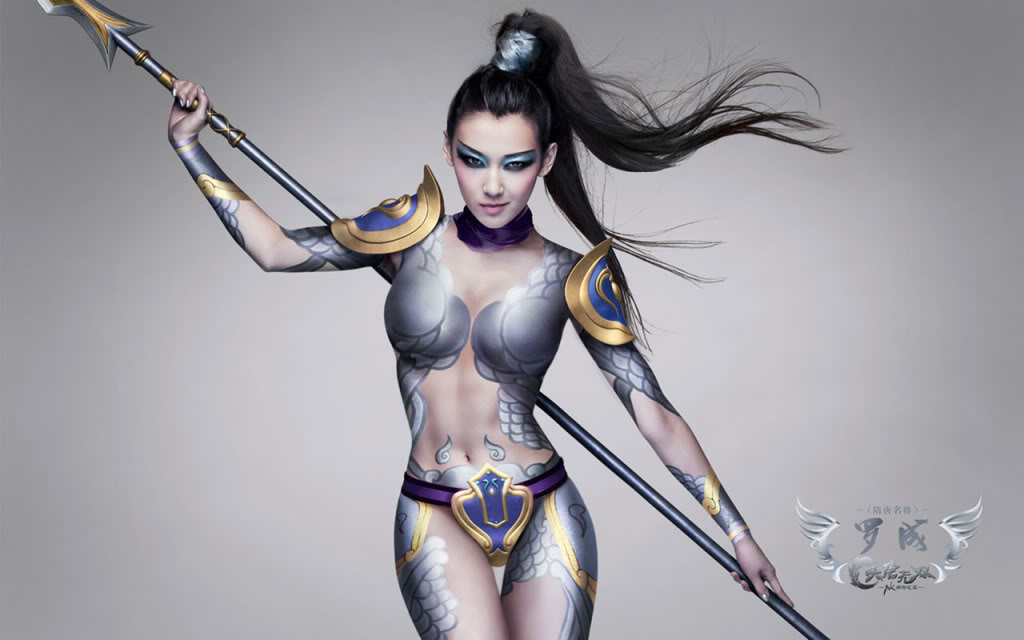 These 4 are the insperation to make a chinese painting on the shouldershields.
Thet have all something special. The 1e one will be changed and altered because that will become the painting of the elder who will train the predator which I'm making. It will become the last battle which he had.
I'm not sure about the 2e one because she looks to pretty and sweet. Maybe, maybe a background for the 3e one. This one will be a sweet kind of painting.
The last one will be a cheeky one. It will change a lot but it will become a good memory for this predator.
I know someone who can write chinese. So there will be text close to them.
Also will there be text on the bio. I hope I can get some of the paint of the bio. The reason is that I will put some extra LEDs on the bio.

(Short story about the predator I'm going to make)
The name of the predator is Zargoid. Now a days he is very old and a few centuries he stopped with hunting. He had many hunts, and he fougth many beast in the past. He was bored of hunting. A honourable place with the elders was possible, but in his heart he was to much a hunter. For many decades he trained younglings and was sometimes the leader of younglings at their first hunt. His name was feared because he knew immediatly when a young big predator was or a hunter or a warrior or...a big bag of fear. Also no big names of fathers and mothers, strong clans who protect their offspring would help. When Zargoid knew that the young predator was of that honourable race they got even worse! But the ones who passed became great names in hunting. Gharidoid the Magnificent, a small predator one of his students, became a great leader of new predator armys. His tactics and wisdom was known in many galaxys. Dyritoid the brutal, a female predator who destroyed the complete sub-race of pyro aliens (the aliens who had as unexpected weapon spitting buring saliva). Her hunters even destroyed 5 galaxys only to please her. She was one of the best young hunters which Zargoid was the leader of the first hunt. Black Kalhadra his steath in weapons gave all predators the advantage in battle. 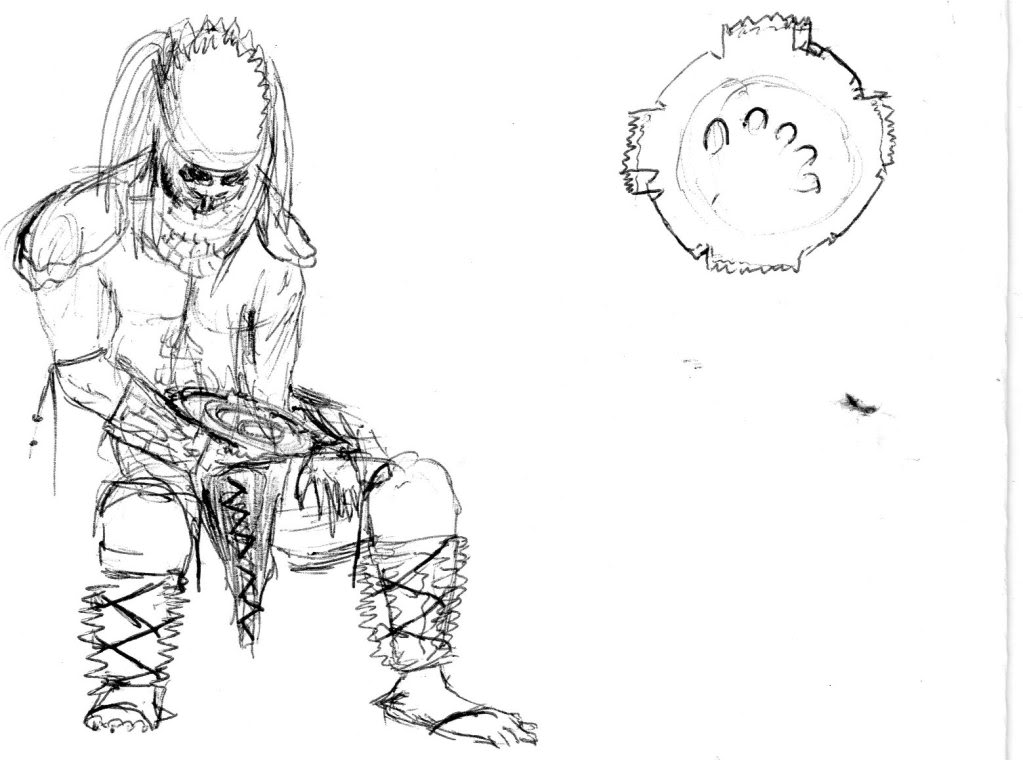 Left of the predator is his handaxe old-school. The colour will look like green stone.
His legarmor will be (fake) wolfskin. And he will only have 1 gauntlet. The other hand will have a specific glove

I would love to see any updates or pictures of what you have done so far!

I would like to say I am flattered that my illustration inspired you're work some...