I've posted this in a few other places, but since here seems to be the premier site for all things predator, I'll put it here as well.  First time painting anything other than model cars.  Never painted anything with flesh, much less a predator, so go easy on me.

Nowhere near done.  Still tons of layers of paint to go.

Working on resculpting the helmet of my P2. Quite a few tweaks like raising the cheeks, lowering the brow, adjusting the inclination of the nose bridge, resculpting the sides of the crown etc. Just whatever I can think of to give it that more squat, fat look it had in the movie as opposed to the tall and skinny look it has on the figure.

Sanded down the texture as well. Just too much texture for my taste. It'll still have some texture when I'm done. Just not nearly as deep and rough. 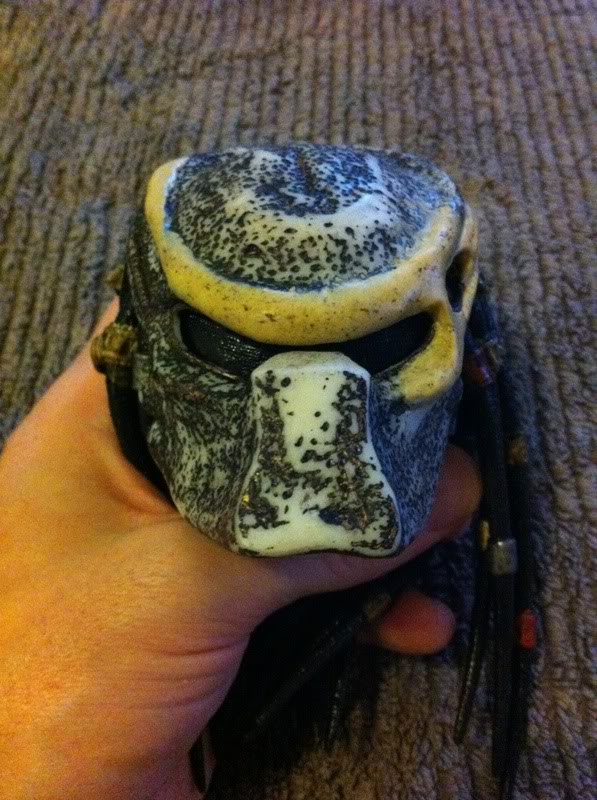 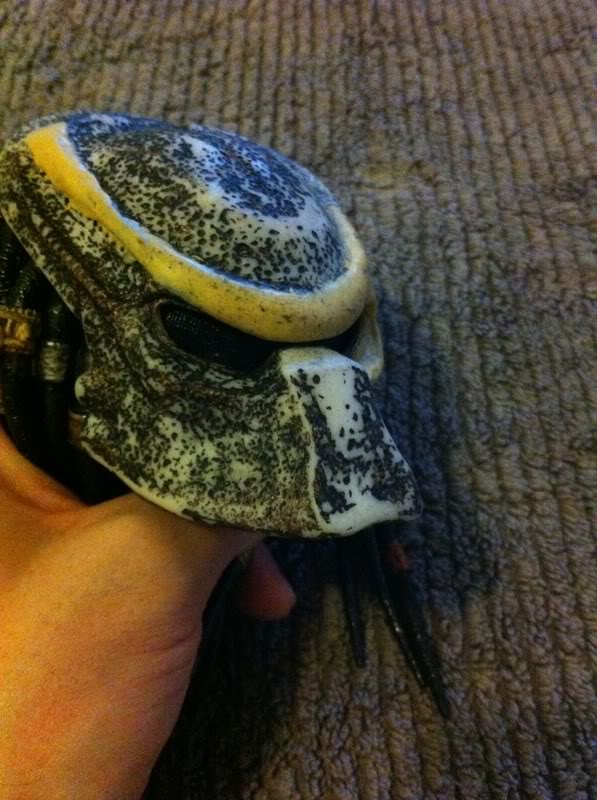 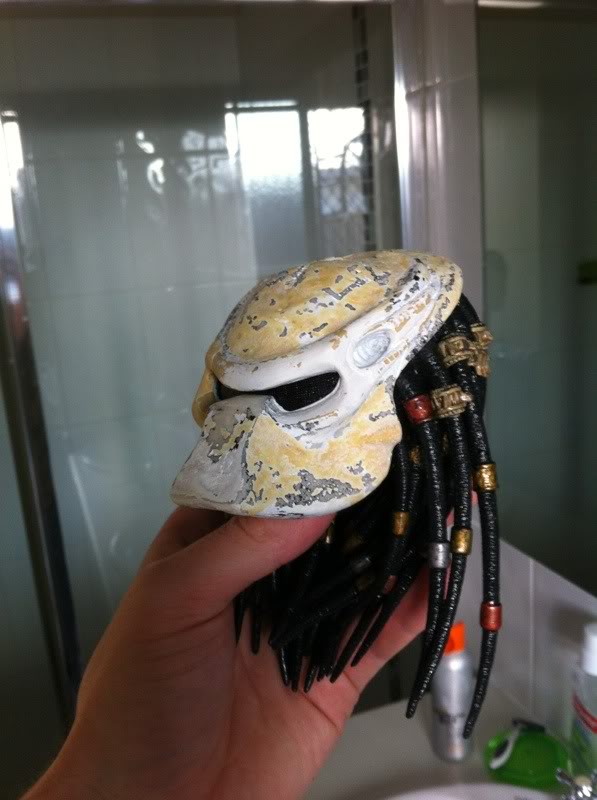 Here's one with some fishnet stocking I was testing for the net, but it doesn't look good.  Couldn't get the baggy look like it has on film, so I decided to make my own later. 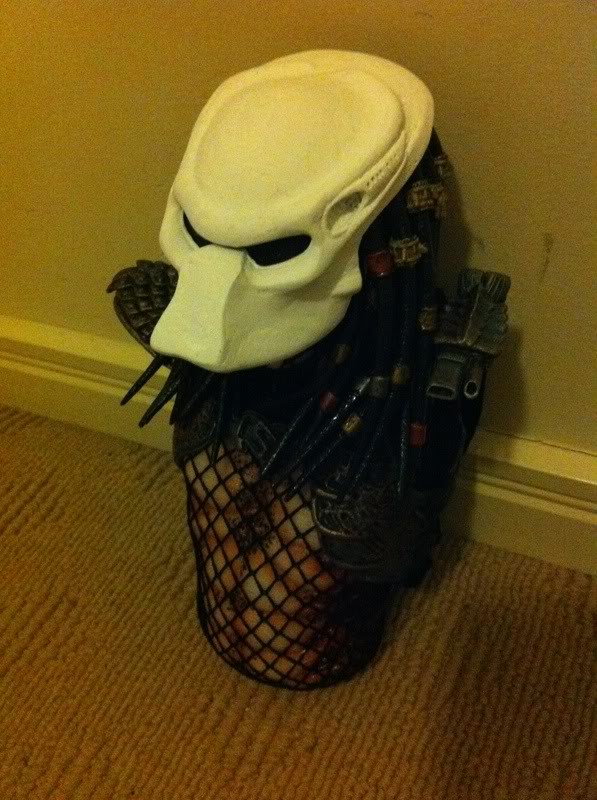 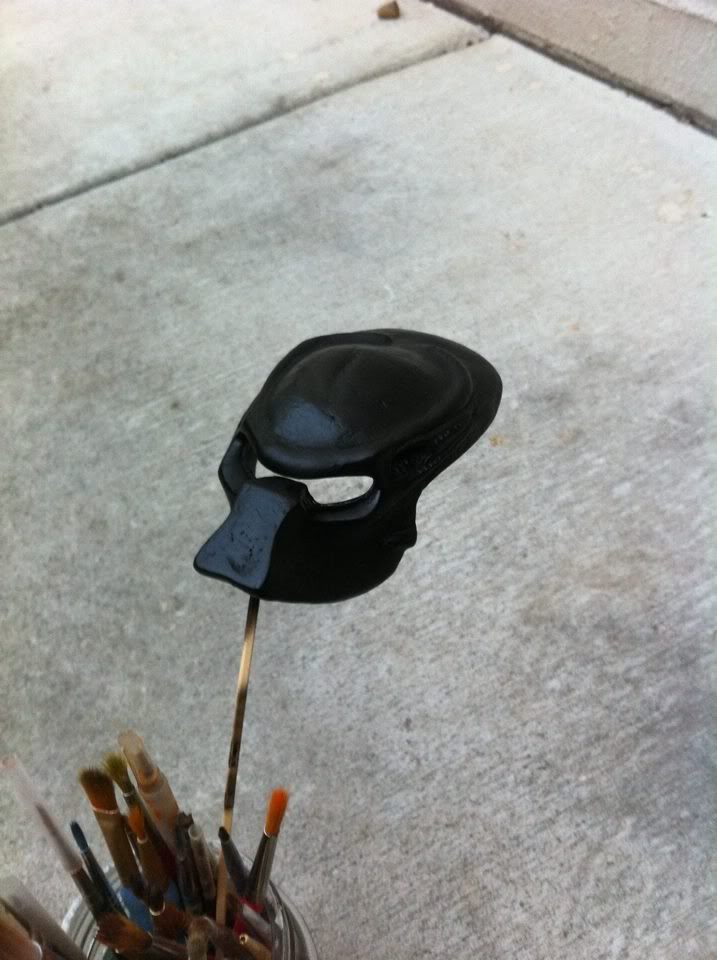 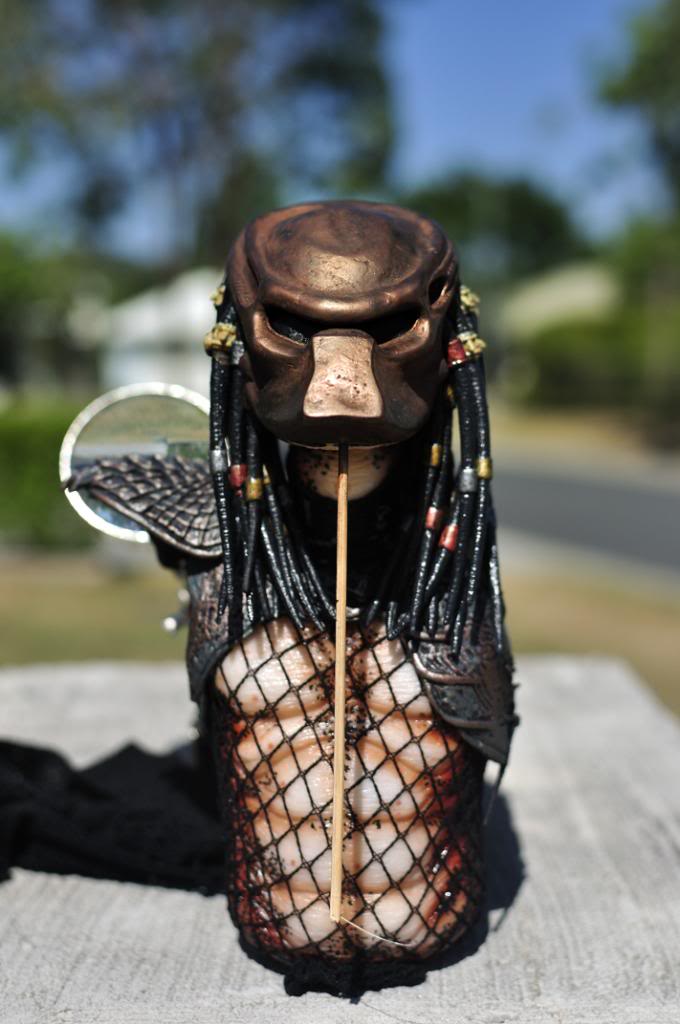 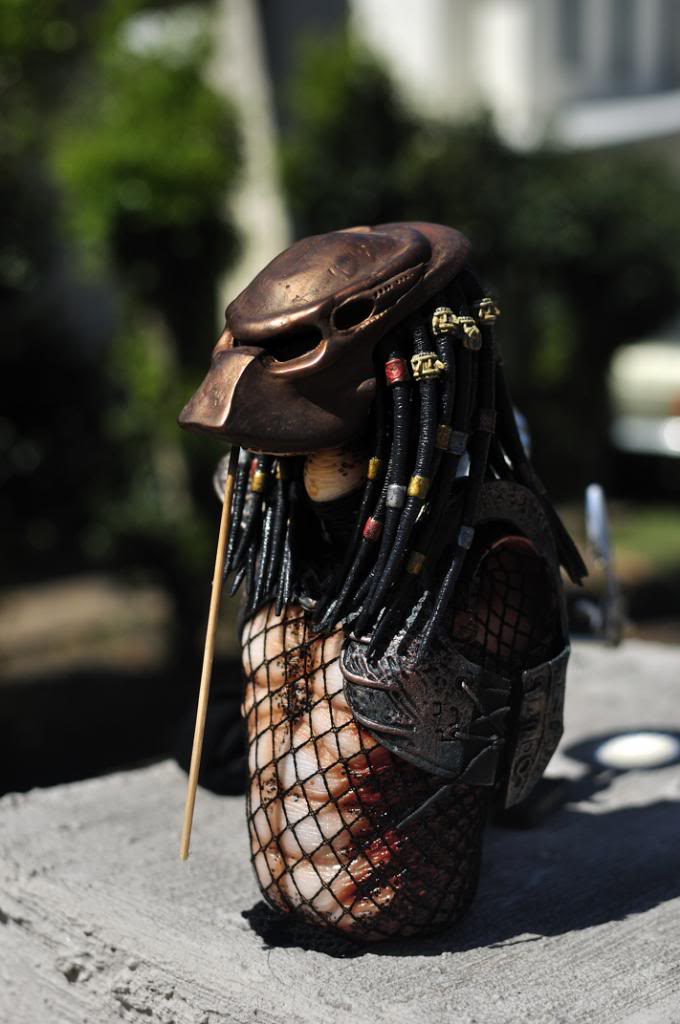 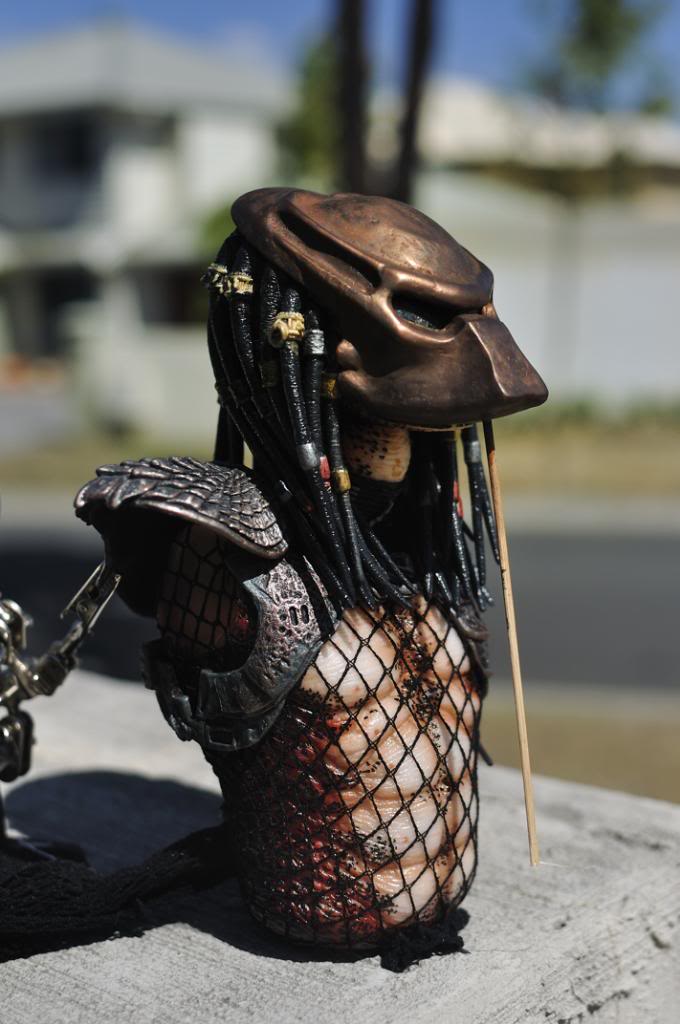 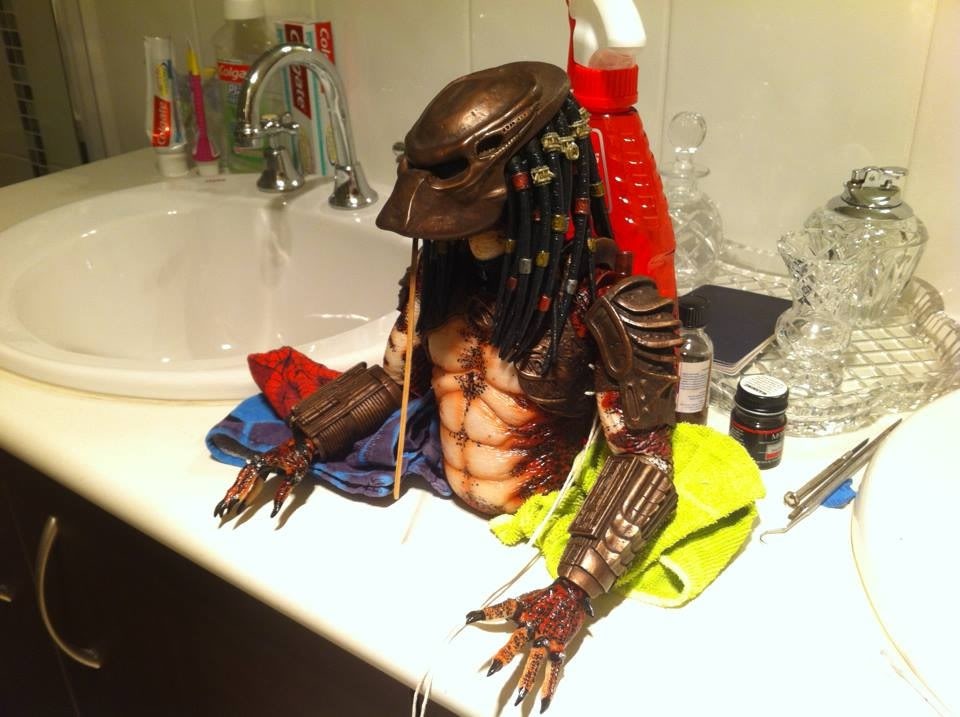 Here's one in a bit of natural light. I can't seem to get a perfect pic, but the tint is a bit darker to the naked eye, and the coppery bits only really appear when you're looking at it head on. As the head rotates the copper shimmers and disappears as it does on the movie helmet i.e. the copper only shows through heavily when light hits it straight on. Any part that's not being hit by light looks like the dark, blackish brown. So it's a bit reactive to light instead of being a straight, static copper or brown. 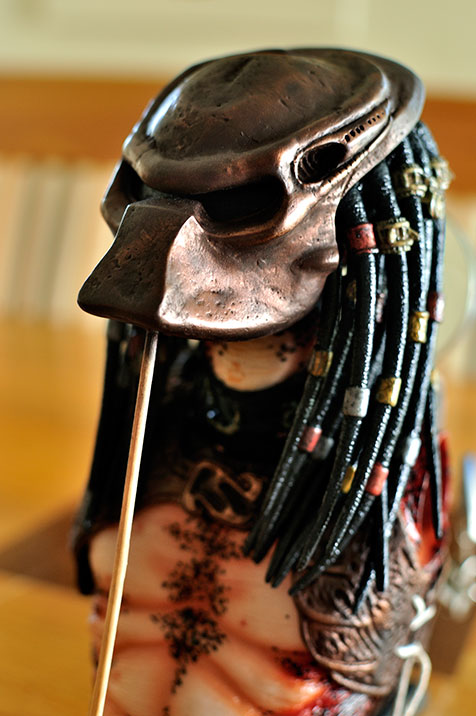 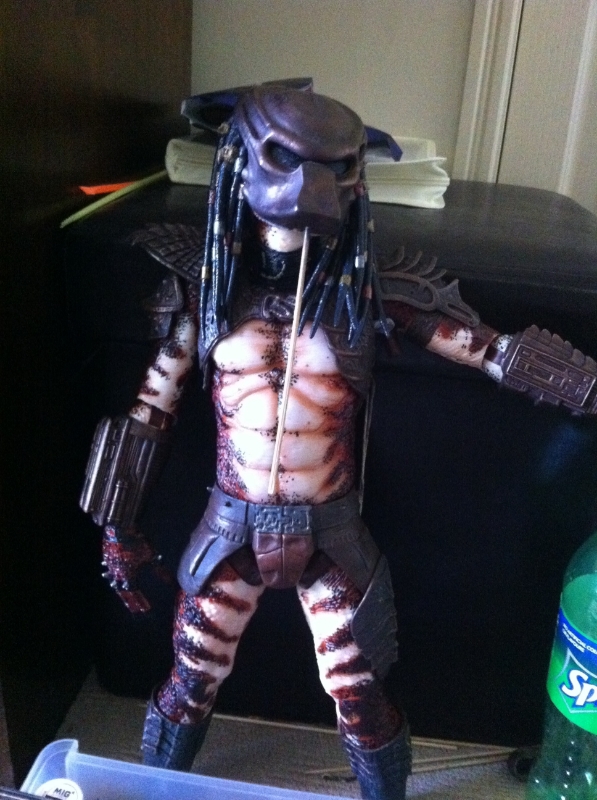 Found some nice mesh that, once painted properly, will be perfect. 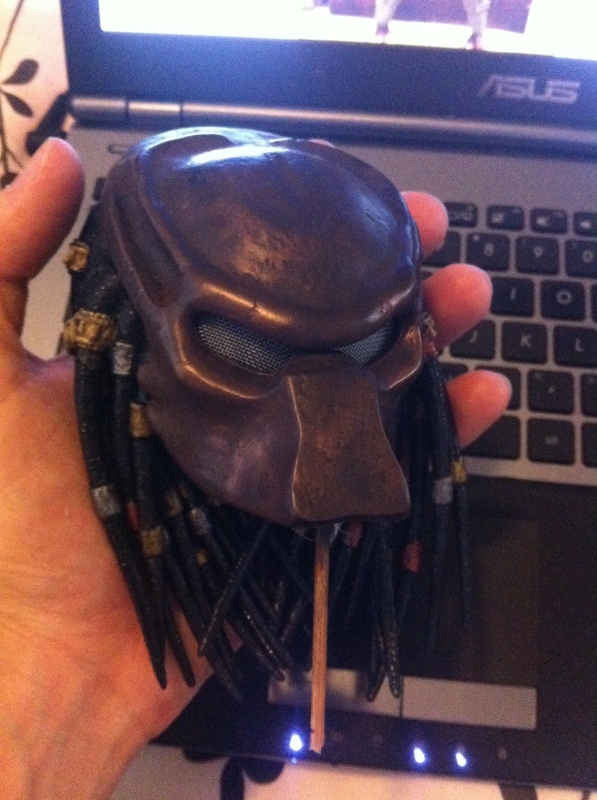 I also painted one of the hands.  Still a tweak or two and a clear coat and it'll be done.  20+ hours just on the hand. 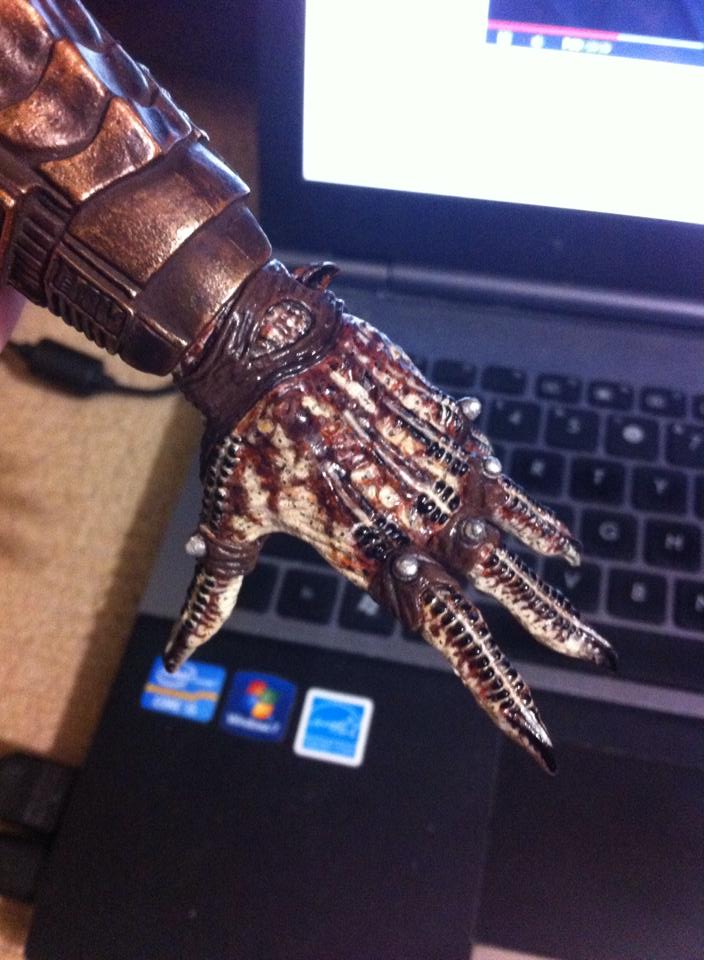 Wicked buddy, keep going. I've promised my self I'd rework my 1/4 scale P1 one day.

Very nice, looking forward to seeing the progress on this one.

Thanks guys. Didn't want to do another hand just yet, so I started putting the first few layers on the feet. 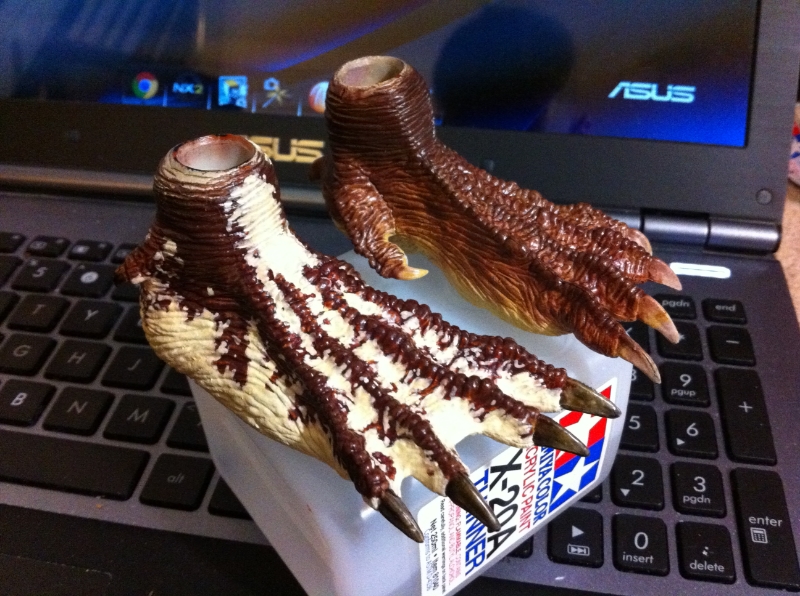 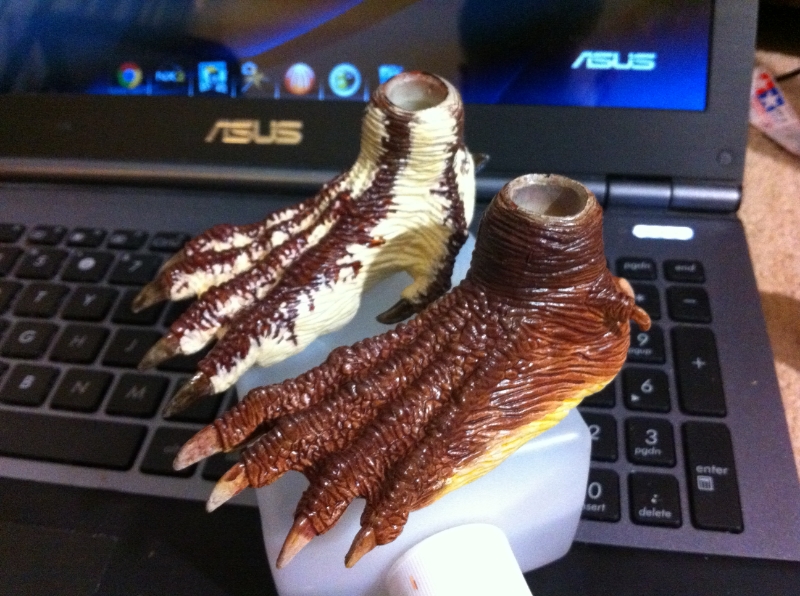 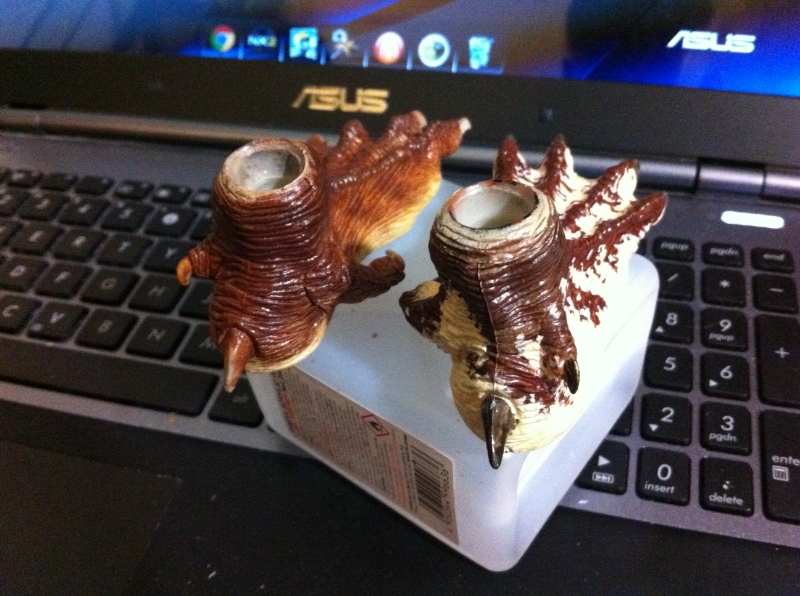 Dude, you gotta loose that seam line at the back of the foot.

I plan to when I get another chance to work on it.  It wasn't too noticeable to begin with, but the more I painted the more it stood out.  The seam on the big toe is a bit too noticeable as well.  I'll shave it off with a scalpel before I do anymore painting.

The foot looks darker in the pic than it is.  It's driving me insane though.  The more I work on it the more dissatisfied I become with it. 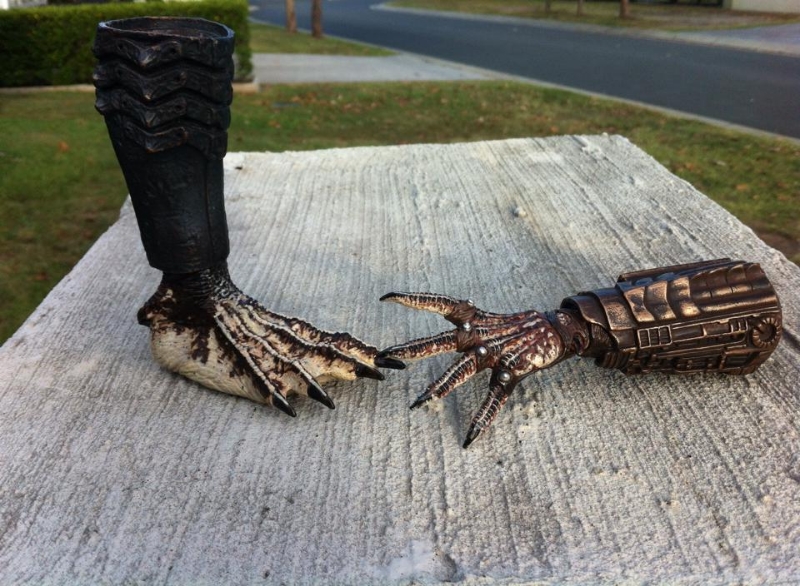 When I saw the first picture in this thread, I thought you were insane and that this was going to look terrible.  I think the complete opposite now, this is looking sensational so far, more progress, more updates!!!  Excited to see the outcome!

Looking good fella, you've inspired me to start my P1.

Can I ask where did you get the mesh or could I please buy a chunk off you if you ave any spare?

The mesh is actually from a little tea straining device for a tea pot. I got it in a little Japanese store. It cost me $2.80, and if cut carefully you would probably have enough to fix up five or six masks. I'm not sure if the store even has them in stock anymore, but if they do I'll grab a couple and let you know.

Found one buddy £1 delivered from Honk Kong on ebay, searched worldwide for "tea strainer" how do you get the wicked dots and blended colour?

These spots sure are tedious. 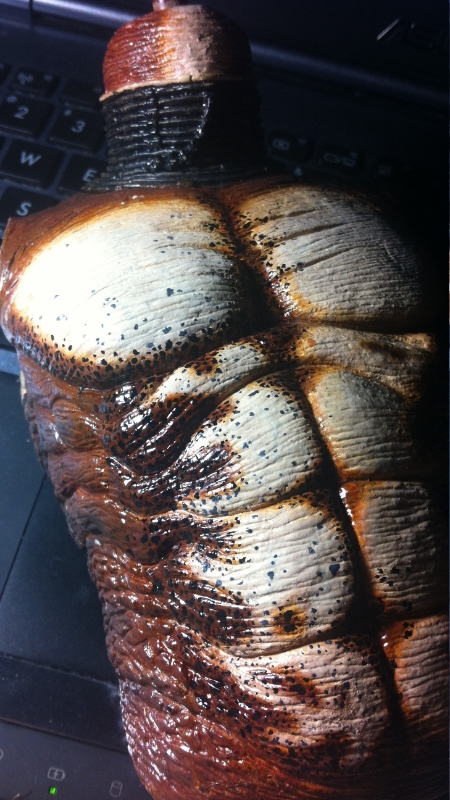 Yeah but so worth it in the end I'm sure, can't wait to see this finished.

I never posted it, but here's a pic I took of the back a while ago. Still a work in progress, but I'm unsure If I'm going to bother finishing up much of the detail, since most of it will be covered by the armour anyway. 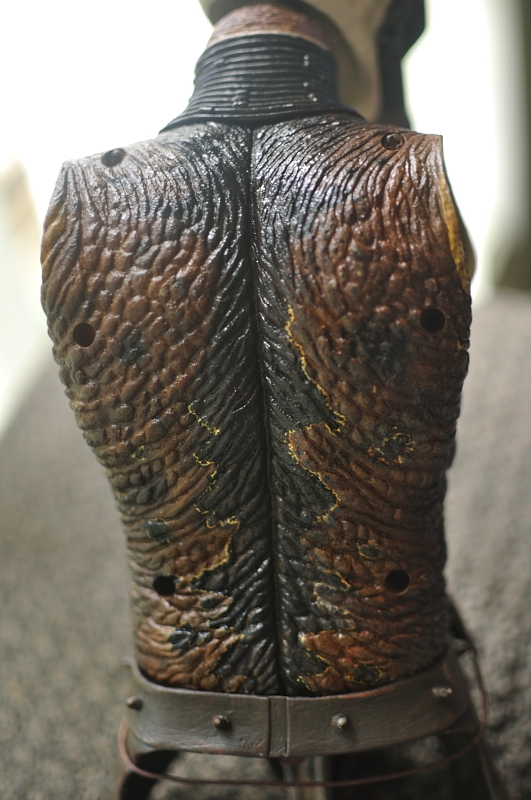 Well, I was kind of happy with my quarter scales factory paint up.  Until now!  Man this thing is looking beautiful.  Very nice work.

Haven't done a ton of work on this guy, but I'm slowly chipping away.  Thought I'd post a few of my WIP pics of the torso.

This was after I'd taken my base white, added the brownish orange-red, and was just starting to layer up the white areas with some yellow to pull the colours together. 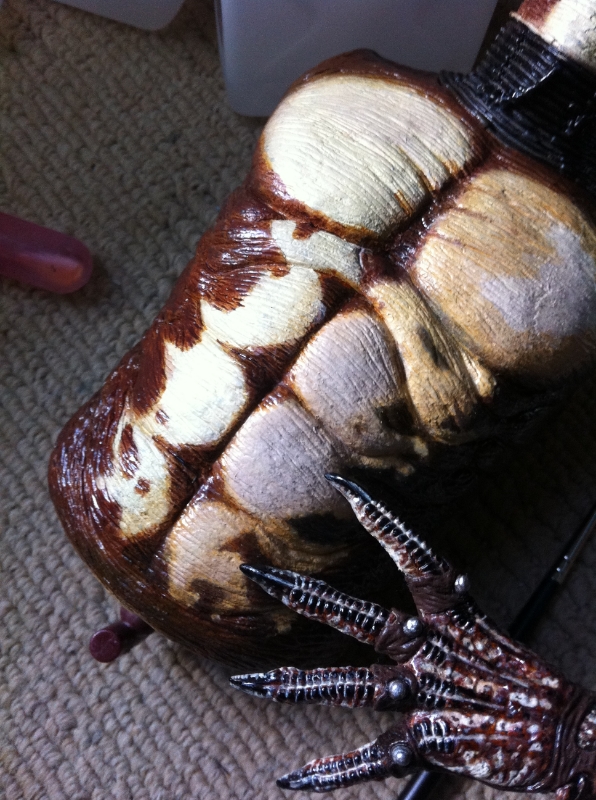 Here's the left side partially done with the right side still pretty much unblended. 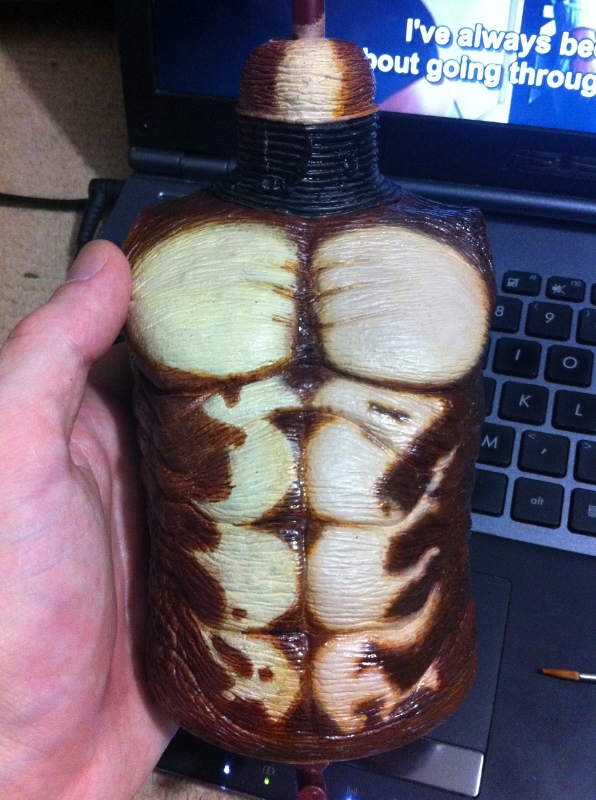 And here's the torso with the first bits of blending pretty much done. 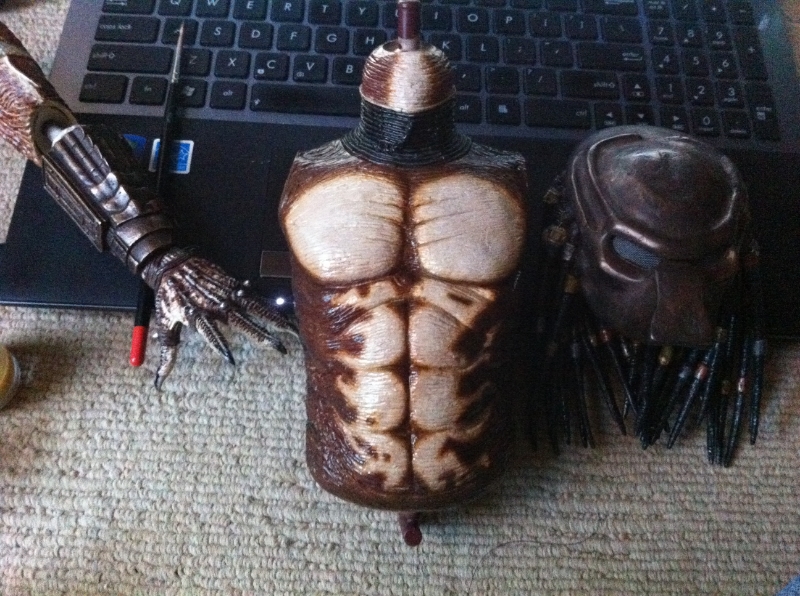 Here's the start of weaving the net.  Started out using nylon thread.  The thread itself is too thick, and my diamonds were closer to 1/2 scale than 1/4.  Found some thinner twine.  It's a bit closer to the proper size, but it's hard to work with.  Very brittle, and it's hard to keep the diamonds very uniform.  Putting the netting on the back burner for now. 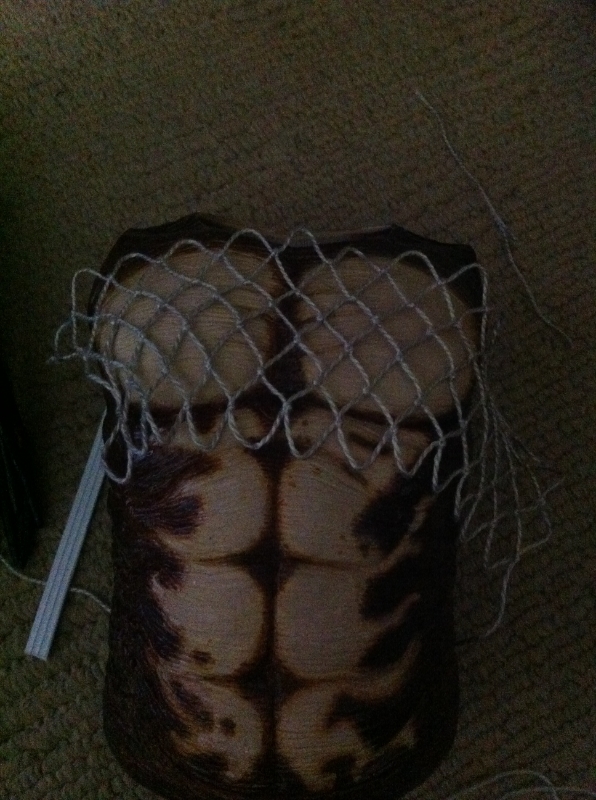 And here's my current progress.  Still tons of spotting to do, but slowly getting there. 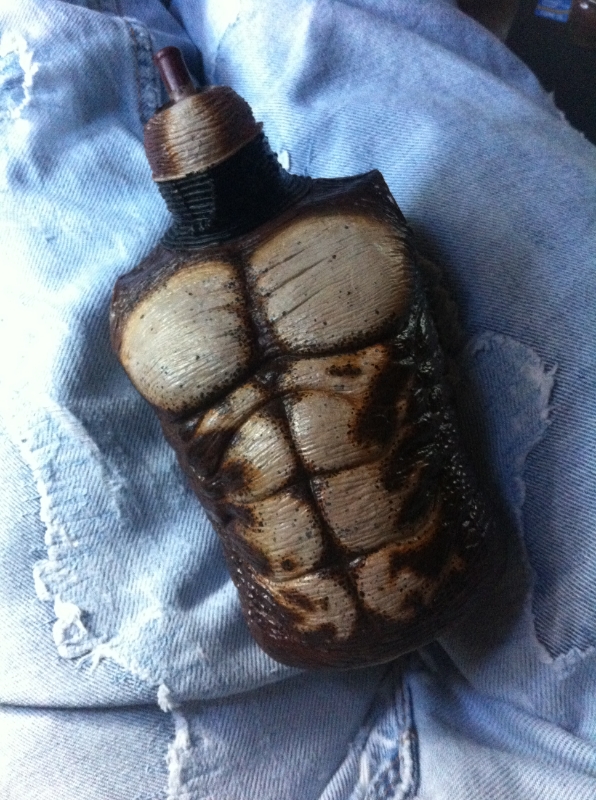 On the next sunny day I'll reassemble him and take a picture in the sunlight to point out all the various stages of completion.  Might help people to see the different stages of the paint up all in one picture.

Man its great to see some updates on your project. I always love seeing WIP shots.

I still adore that mask of yours hope you'd be interested to make a copies of it. I will be sure down for one.

I'll definitely make copies of it.  Still some tweaks I want to do to it.  Just need to get some money for supplies and try my hand at casting it up.

This is fantastic work mate! I'v recently repainted the armour and weapons on my P2 because I never liked it. I haven't bothered with the body only because I think neca did a pretty good job with it (and I don't trust myself to do as good   lol). But yeah, love what you have done!