Sorry to post in the completed suit forum, but there isn't an original prop related area.
Some may remember months ago that three trophy skulls from the Predator 2 spaceship cabinet were auctioned on Profiles in History- well I actually bid and won them. I am and always have been a massive fan of the spaceship scene (being the first part of a Predator film I actually saw), I was thrilled to win them and guess that their broken state put some potential bidders off. 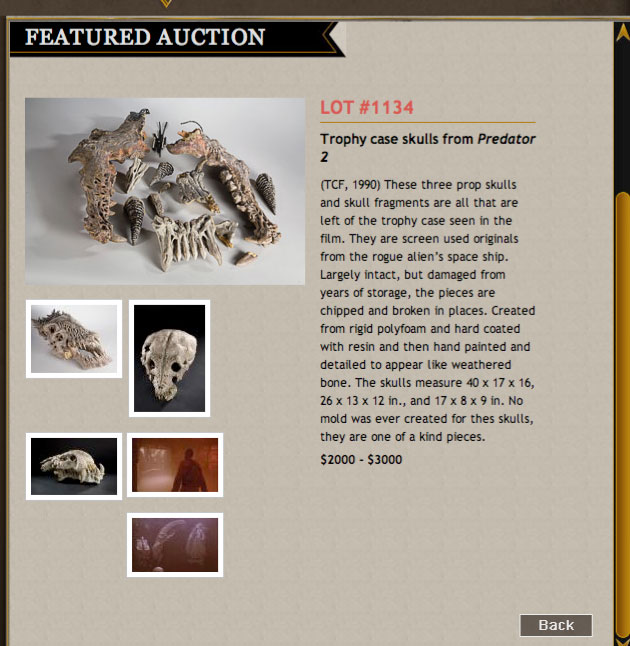 It took a lot of stress arranging to get them packaged and shipped from a distance,I was kept up to date with photos of them being wrapped and boxed. 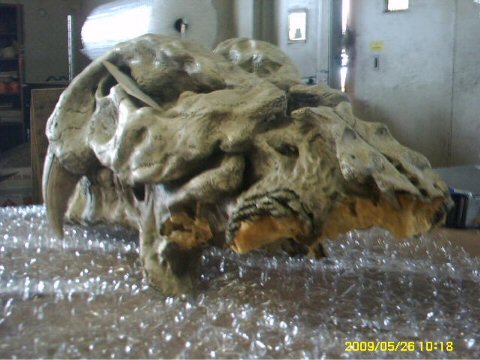 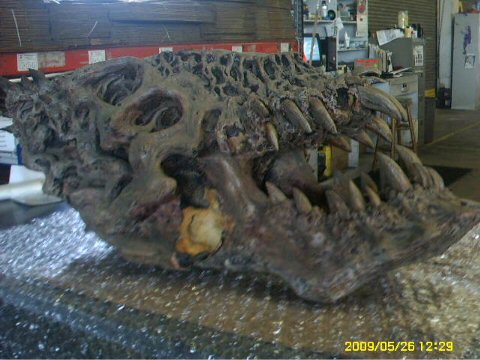 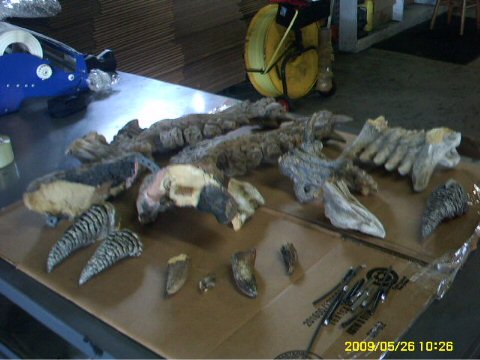 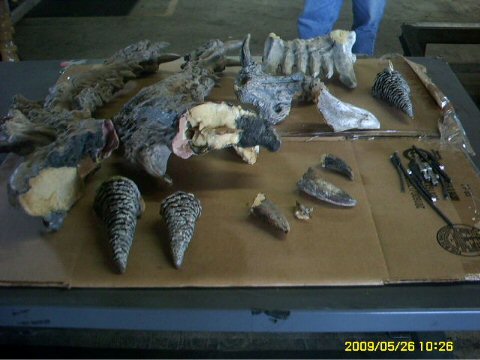 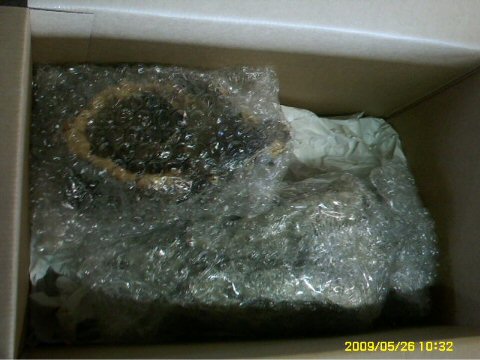 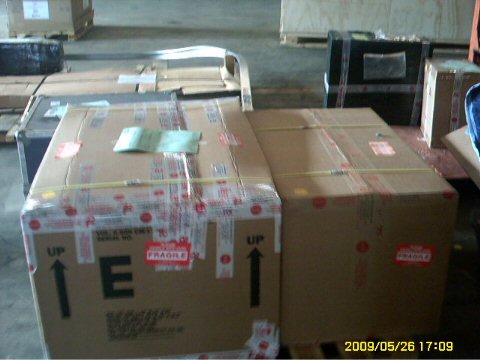 I had to sell some big models well before they arrived and redecorated my room before designing a custom made cabinet to hold them. I only had basic measurements so much of the actual building was delayed until they arrived.
The skull pieces were like a big precious jigsaw puzzle and I had some doubts at how well they could be reassembled and mounted for display. I sealed all of the raw and exposed hard foam to stop it from crumbling away, the largest skull had both large tusks broken off which have thin metal brackets screwed into them where they originally held it to the wall, the black cable pieces used to go through the head underneath but those areas were now torn through.
The horned skull had all of its hrons broken off, one is missing and the original jaw had been previously replaced with a toothed one.Its original fanged one and part cheek were in with the other bits.
The smallest of the three which hung at the top of the cabinet also has its jaw broken off and sadly the cheek areas either side that held it on are lost.
There are pictures in The Winston Effect book showing The Relic suit being tested, on the side wall of the workshop you can see all of the skulls along with the Predator's helmet, spear and disc. Those weapons have long been on the FBI site as stolen, my assumption it that thieves targeted everything on the wall but the skulls got damaged removing them being heavy and fragile. Anyone know any different?
At the same time I managed to speak to Kevin Hudson who build the Alien skull for the cabinet (which was also stolen), he gave me some information as to the original sculptors of mine.
I build wooden framed stands for each skull and covered contact areas with cushioned velvet. They all fit on my wall securely behind glass, protected from dust and sunlight. I also got a chance to display my AVP skull and spine prop. The lower area was idea in size to incorporate an AVP chess set I got with some damage and pieces missing, I inverted two walls to surround the base and repaired a broken corner statue to finish it. 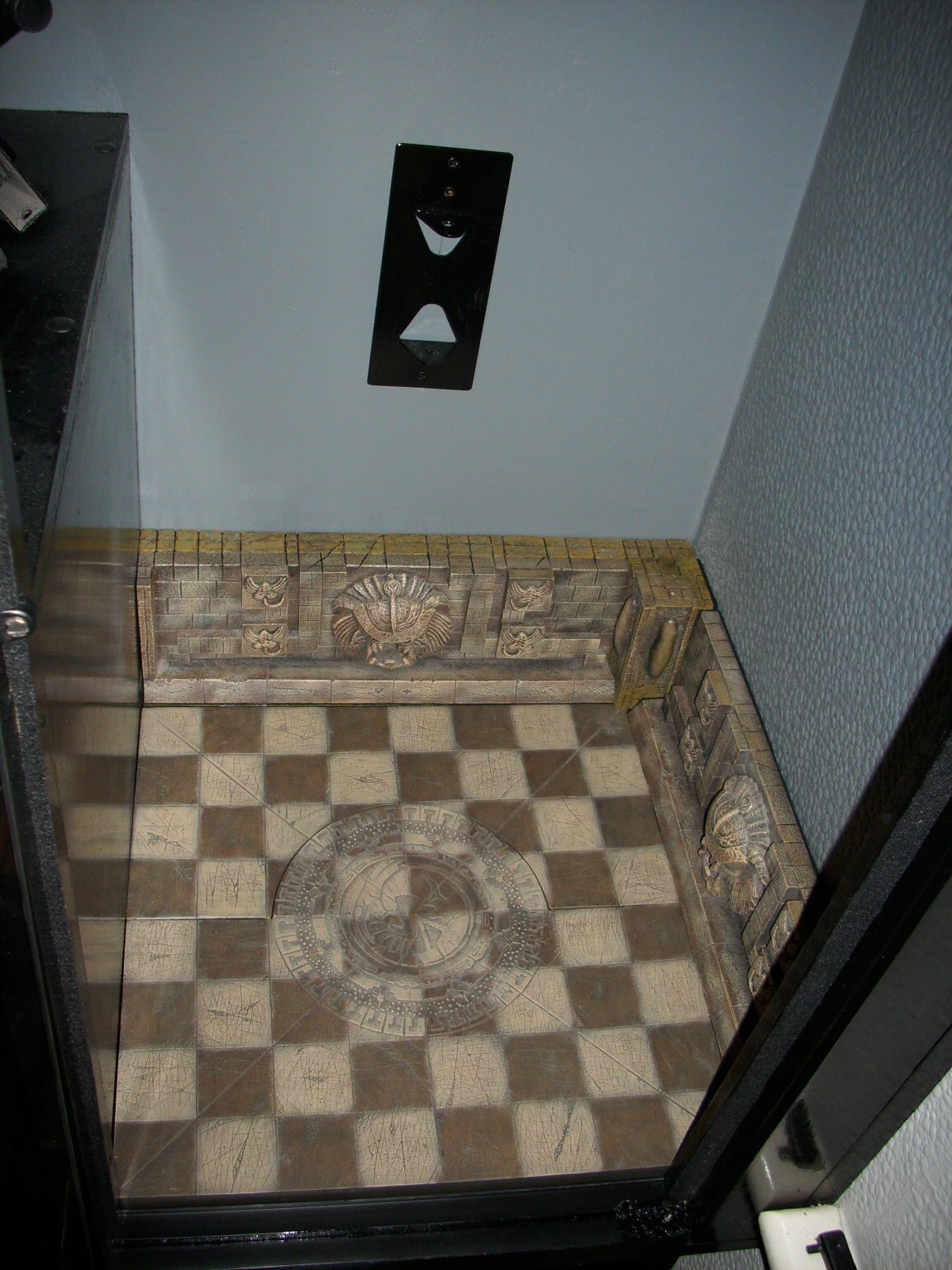 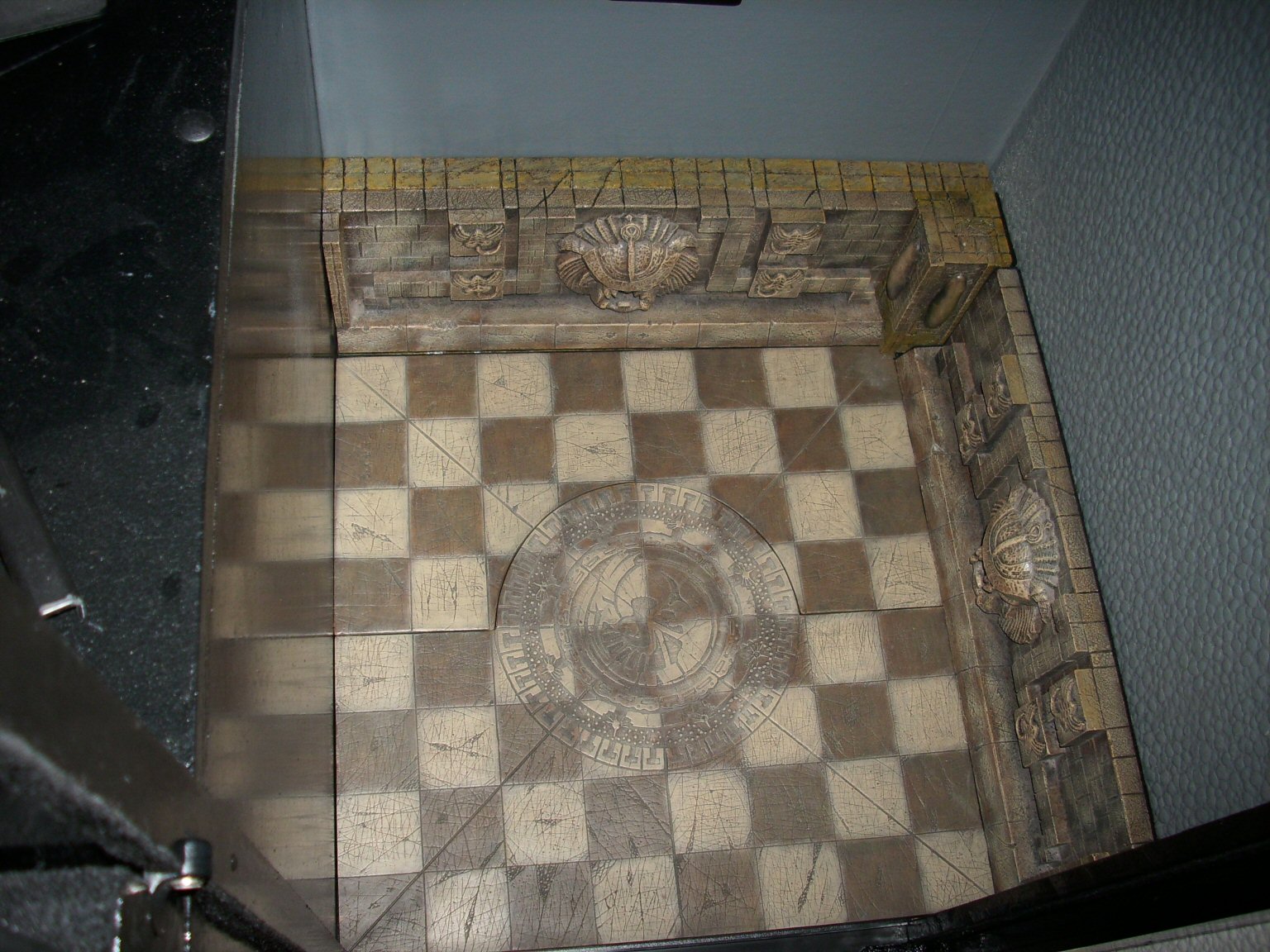 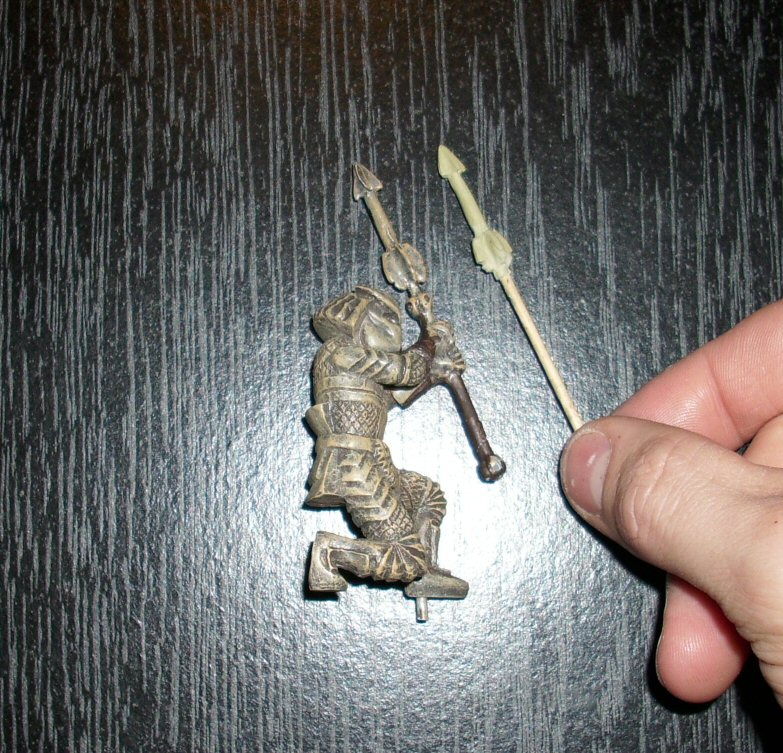 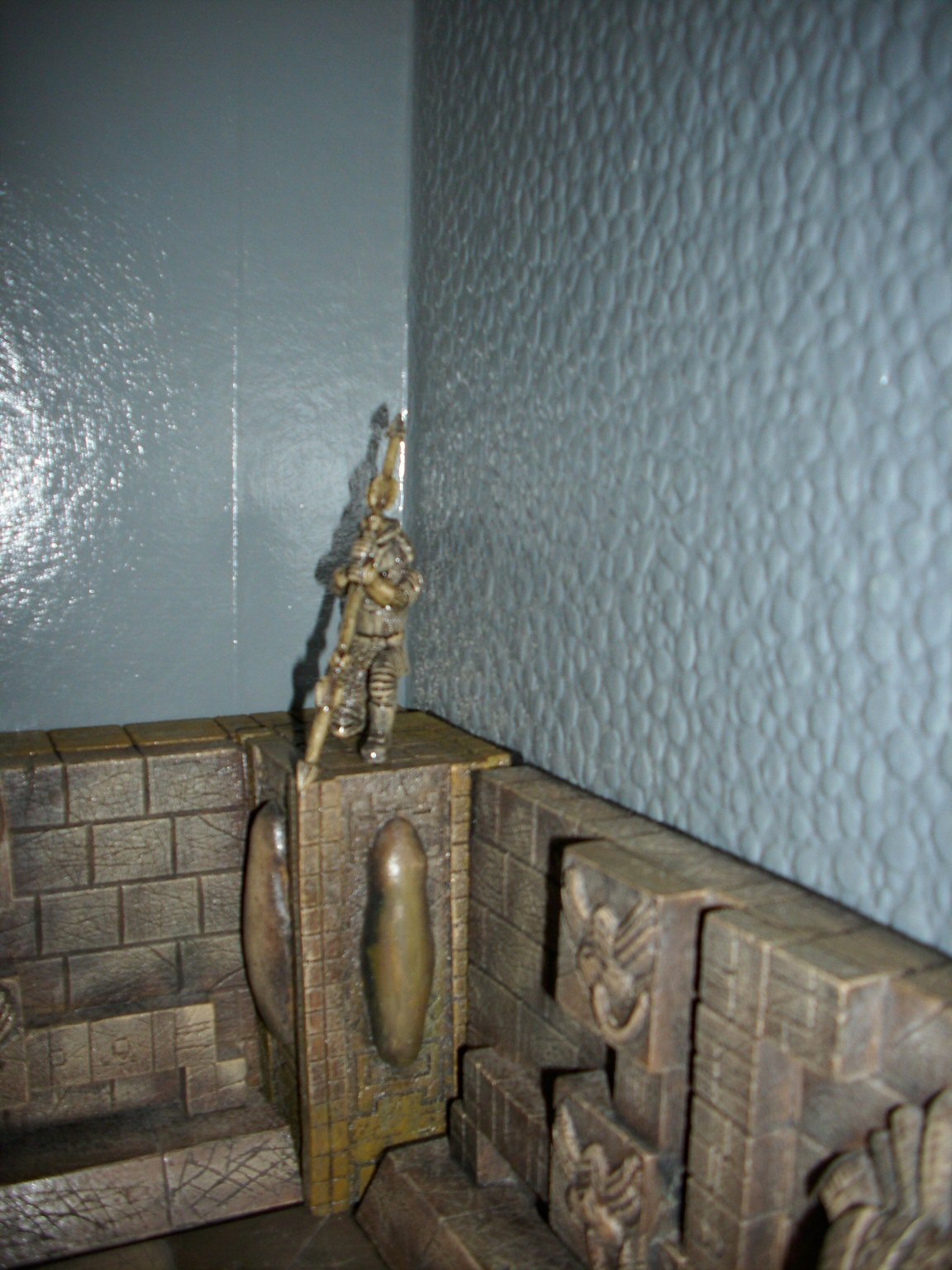 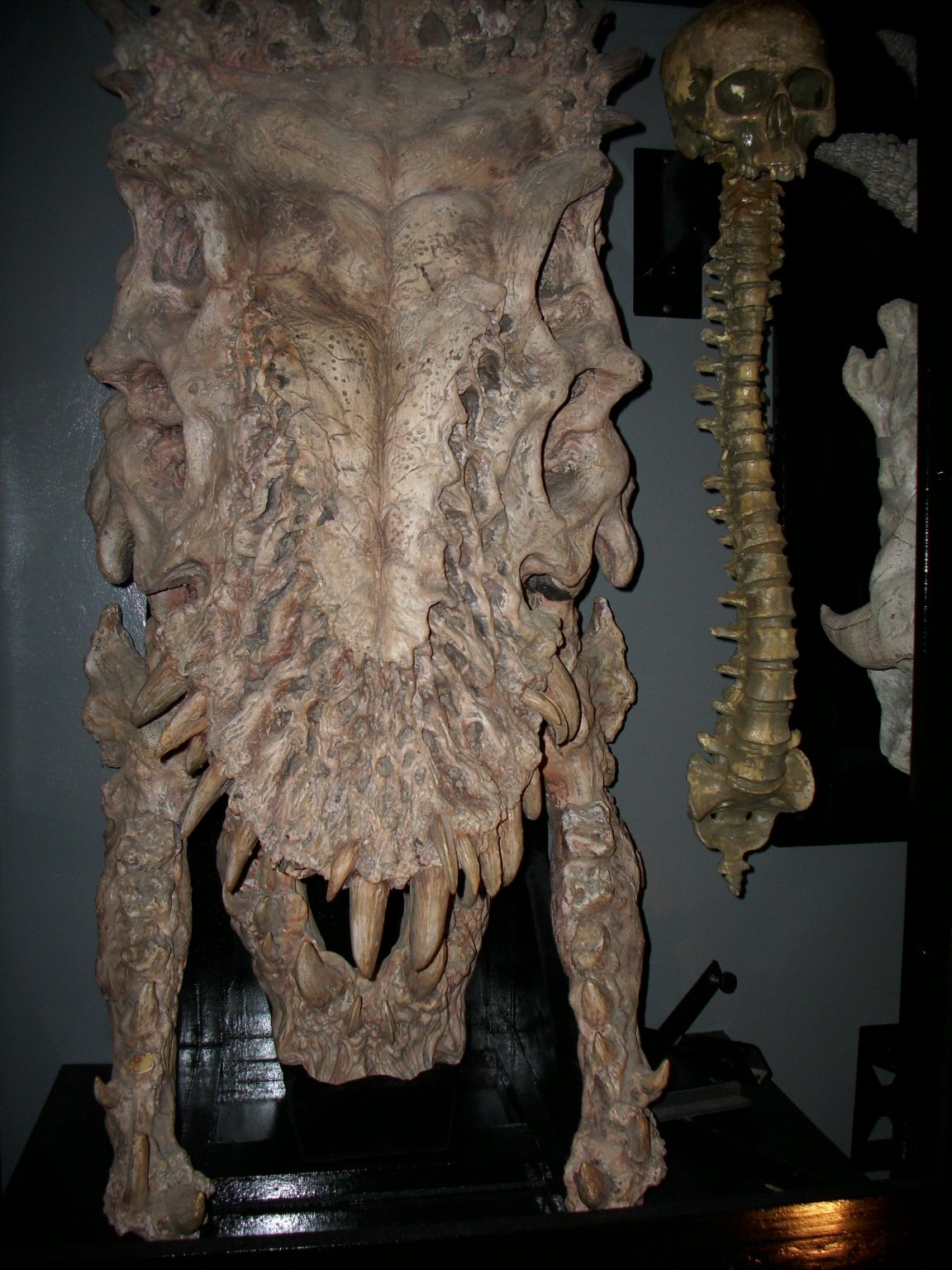 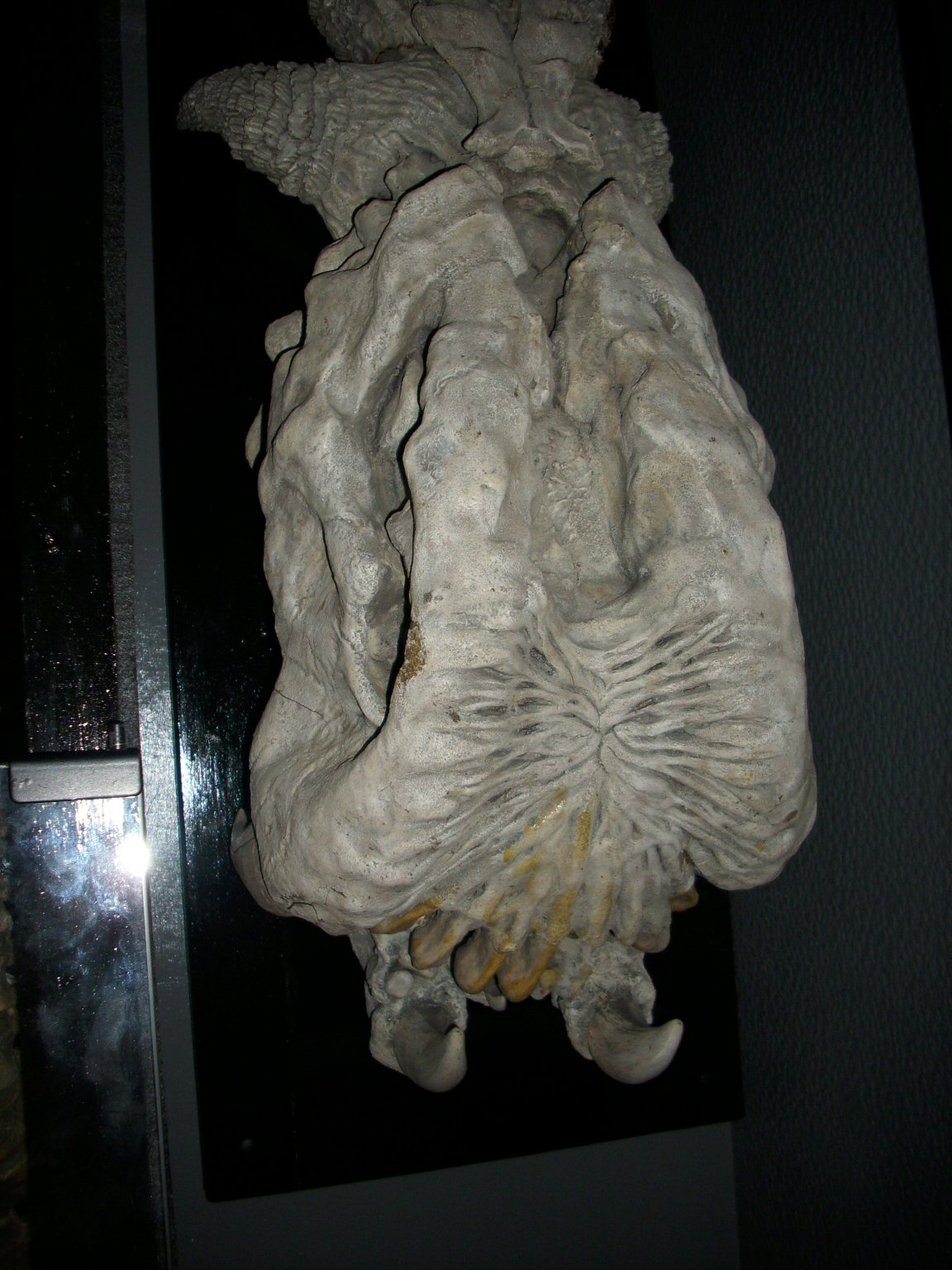 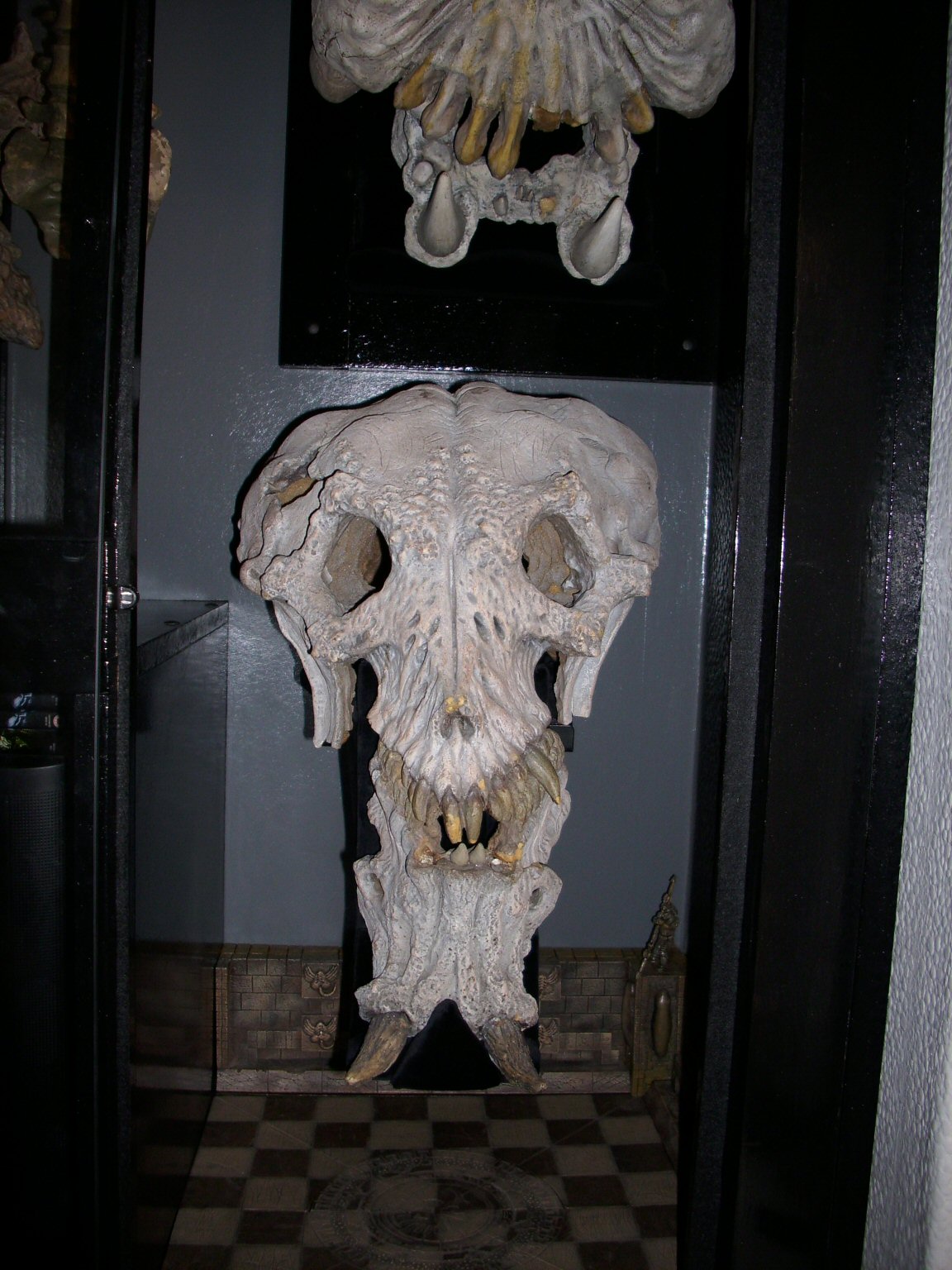 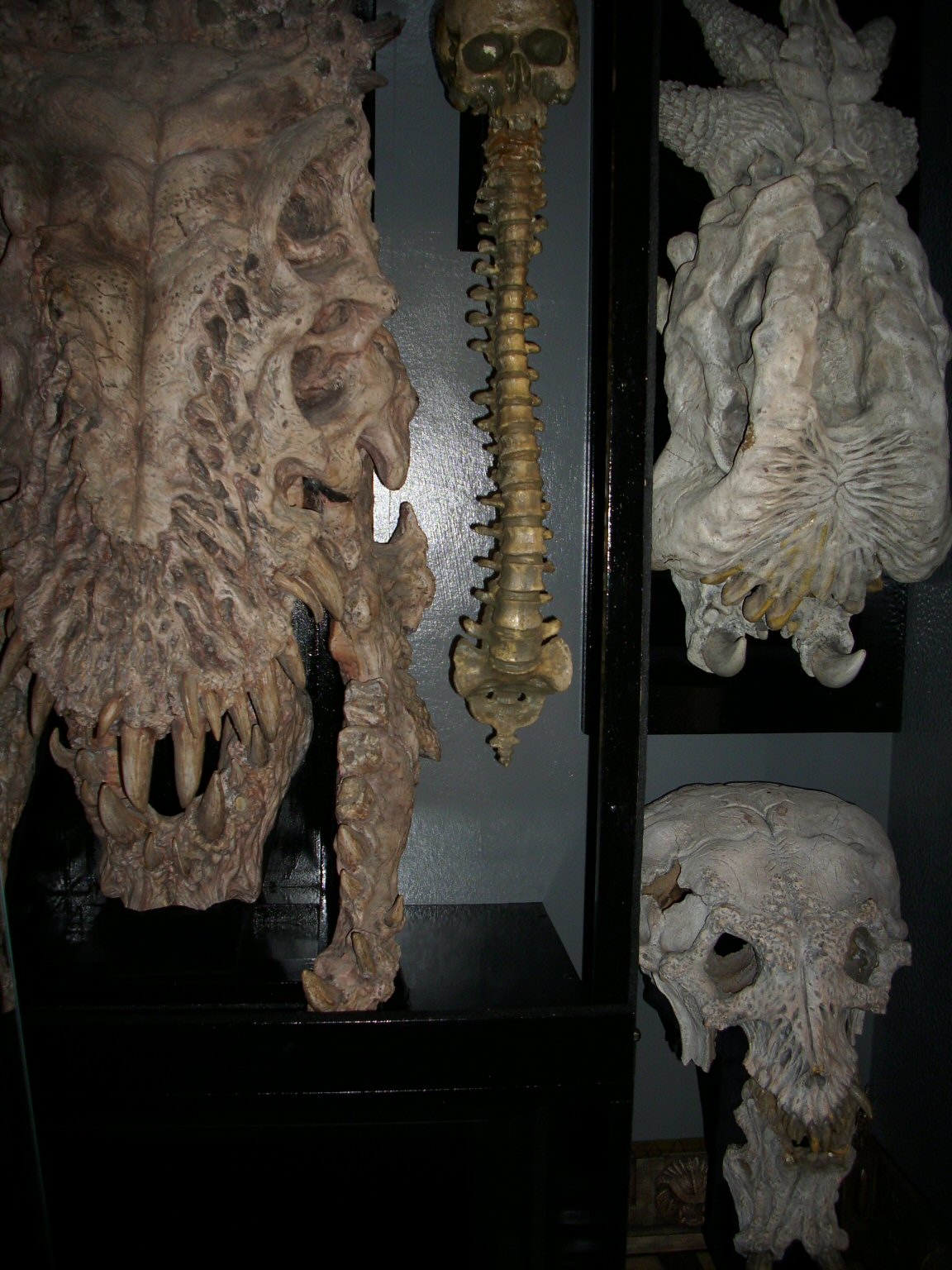 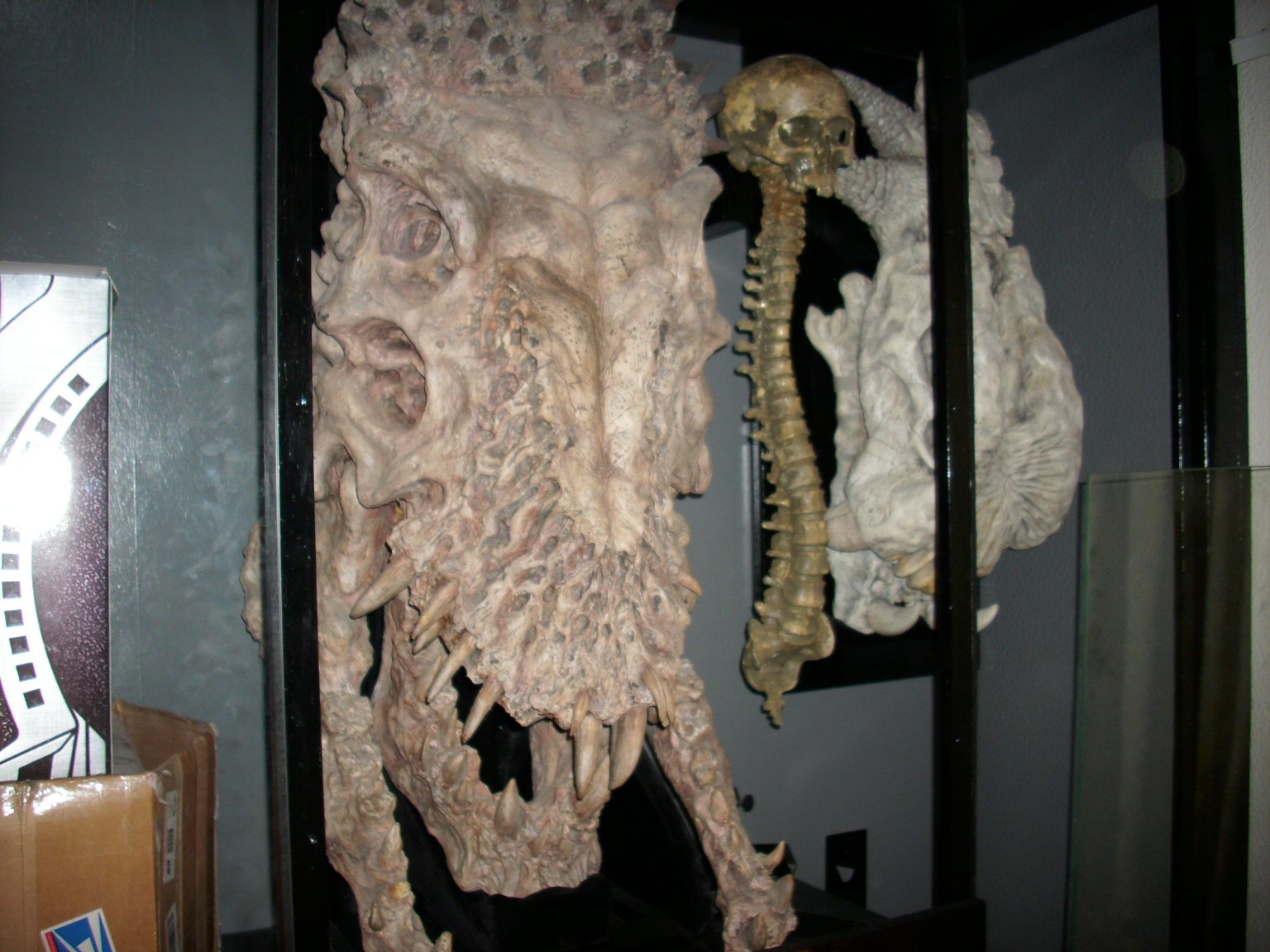 Man that's some piece of history you've got. Amazing to see them after all this time. Your collection of props is truelly admirable, congrats

OMG man they are amazing wish i had them was thinking of doing similar thing to my room with alien skulls and others, but thats emence
C

I have to second Bryan, that's some history. Make sure you have them well guarded as we are all jelous of you and your collection.

It's nice to share with the community and you can trust they are being well cared for. It's by far my most ambitious undertaking but one I haven't regretted and they will never lose their appeal to me.
U

nice to see a fan got them and they will actually be seen and not packed away in a box somewhere, thanks for the pictures, really nice to see them in England also

What did you seal the skulls with?

Thank you for sharing.

Thats just bad ass to own that stuff from the P2 movie! I like the way you displayed them too.I definately would have to look at that every morning before I took off anywhere.

Also,how did you fix the foamed areas that were damaged or torn?

All the exposed foam edges were coated in a wood glue which takes around 24hours to fully dry, it has semi-flixible properties of a PVA while also acting tough like a resin. Without it all those areas were just flaking anytime they were looked at, all the broken edges were also fixed back together this way and the already sealed edges bonded back together well.
I had to use some Araldite when fixing the fir-cone-like spikes back on and a couple of the big skull's teeth were loose, I avoided modifying anything like mounting pieces with wire or rods and none of the remaining holes have been filled. Nothing has been resculpted or replaced because I would rather know that as much of them as possible is original.
kevin Hudson has also worked on The Polar Express and The Watchmen, he said that each skull was the only one made from the molds but he was allowed to make his own personal copy of the Alien skull which he still owns and is his favourite piece, he didn't know about the stolen pieces before I told him.

Dang! Can't believe u got this piece. It'll be like a Yautja Natural History of Museum in your home

I remember that auction! I was drooling over it. Congrats on the win and..... to have a few pieces of Predator history in your house is awesome. They look great. Cheers!

beautiful display there bud!!! you show cased them perfectly!! awesome!

Damn! That one is just HUGE! Excellent score!