Im not sure if you guys would be interested in this, but I figured this was a good enough place as any to post them.

Anyway, the Air force just assigned me to Vanderberg Air Force Base in California. I just got out here on thursday, and whenever you inprocess to a base they give you two weeks to complete a checklist of things that can be completed in an afternoon. Without anything to do on the weekned besides workout or sit in the hotel room watching tv I decided to drive down to LA and see some of the places from movies and tv shows that I had always wanted to visit.

It was kind of a spur of the moment decision, which meant I left later than I should have and had less daylight time to go around than I wanted to. Nontheless I did track down some cool filming locations from "Buffy the Vampire Slayer", "Back to the Future", "Halloween", "Modern Family", and "Die Hard". I intend to go back next weekend to get some more pictures.

First up I hit up the Summers' house from "Buffy the Vampire Slayer". The house had changed quite a bit, having the lawn ripped up and trees grown in but was still recognizeable. It was easy to find because it stood out as dark and secluded in a small sunny neighborhood.

Next I walked the 3 blocks to Torrence High School, which stood in for Sunnydale High for the first 3 seasons.

The railing that Xander flipped over after seeing Buffy for the first time.

Where Buffy scolds Giles for sleeping with her mom

I always figured that the courtyard in the back of the school was fake (it had that too perfect "set" look to it), but decided to walk around back and check it out. To my suprise the courtyard was real and has stayed more or less the same since the show.

Next I cruised over to Whittier High School, which stood in for Hill Valley High School in "Back to the Future". It was actually a large complex of buildings, of which the high school exterior was only 1. I actually walked by it without noticing at first.
I was going to go around back and try to locate the place where George punched out Biff, or if I felt really daring go into the gym and do my best Jhonny B Goode impression on the stage, but I had to hop a large fence and avoid practicing sports teams just to ge to this point, and didn't want to press my luck.

Then I headed over to the Mcfly residence.

After that I drove over to Pasadena in order to find Doc's house. When I got there I discovered a large wedding going on, and not wanting to bother them, drove by and quickly snapped a couple photos from the car.

George's house was orignally not on my agenda, but when I discovered it was only a 5 minute drive from Doc's I figured it was worth it.

A few minutes away from that was the famous "Myers House" from Halloween.

Right across the street was the hardware store where Michael broke in to steal his mask and knives. Now a restaraunt.

At this point I was losing the light but still wanted to get in another location so I went over to Culver City where they film ABC's "Modern Family, my favorite TV comedy.

Here is Phil and Claire's house:

And Cam and Mitchell's:

I was suprised at how the streets seemed so open and big on tv but were really quite narrow and tiny in real life.

It was that people from neighborhood watch showed up and asked why a strange man was walking around taking pictures of thier houses. I told them that I was a journalist writing an article about local filming locations. Nontheless I didn't want to press my luck so I headed back.
But when I turned around to my suprise I could see one more location. Nakatomi Plaza from "Die Hard" was in clear view from the modern family house. I fully intend to get a better picture of this in the daylight, but for now it was a nice way to wrap up the night.

I also tried to find the Command Center from "Power Rangers" (both to amuse my nephew and pay fanservice to my 5 year old self), but I ended up spending an hour driving to the middle of nowhere just to find that the whole area was gated off. Im going to call the insititute that owns the building to find out if there is any way they could let me in to take a couple pictures next week.


Anyway, hope that you all enjoyed it!

Wasnt the BTTF gym actually the basement to the church near the Kodak Theater?

Hmm, maybe. You are probably right. Il have to check out the church next week.

RPF PREMIUM MEMBER
Can someone post a picture of what the Myers house looked like in the movie.

The magic of the movies.

I love this stuff. 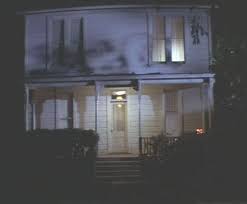 Sure has changed since the 70s. Its not even in the same place anymore. When the neighborhood was leveled some guy bought the house, chopped it in half, and moved it to its current location.