Great collection! I was a huge fan of the series when it first aired, as I was a teen then (and have always liked neat sci-fi uniforms). I've always wanted a screen-accurate visitor uniform someday, just for the heck of it (though hardly anyone would recognize someone dressed like that at a con, even if I ever went to another con someday).
In 2005, I was asked to come down to LA to do a talking head segment for the History Channel. Later that day we all entered a 'old west set' area to shoot more segments, and I immediately recognized the place as the 'western set' they used in the "Final Battle" series. Very little had changed, even the random Amtrak-marked railroad cars were still sitting there. I even walked into saloon set where Tyler first shows up with the lizard voice fake neckbands. It's at the Sable Ranch in Santa Clarita. Even though I knew where I was at the time, I really wish I'd taken more photos...

Saw this on a car in the junkyard this weekend, thought of this thread and snapped a pic for you.

I love it, thanks for sharing! -may I repost it on my V facebook page?

Repros of the above and the other 2 (?) issued

This thread is a constant education for me. I had no idea there was so much "V" stuff.

Keiko said:
This thread is a constant education for me. I had no idea there was so much "V" stuff.
Click to expand...

Haha that bumper sticker:
Don't follow me, I am just! 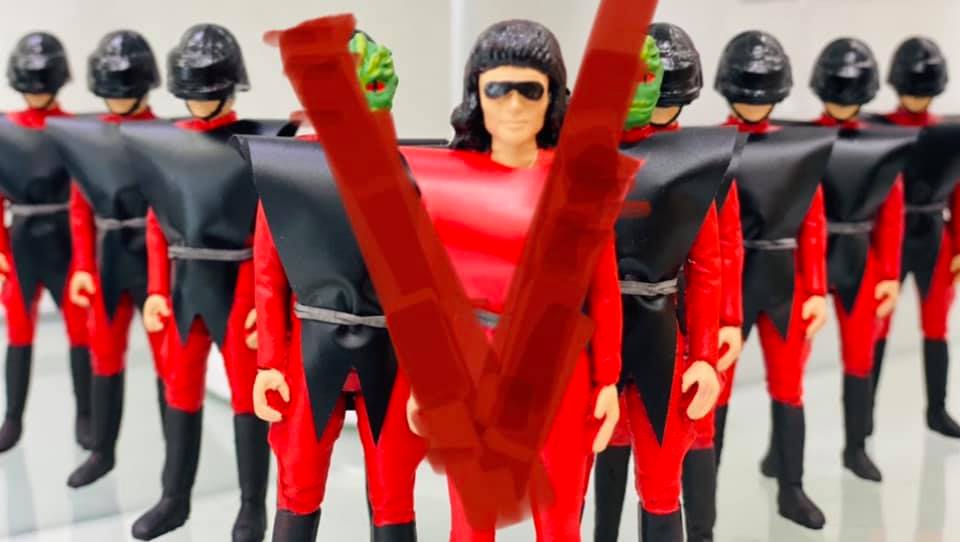 Sirian Visitor said:
Nice, any chance of a close up of the unmasked Visitors please?
Click to expand...

F
Were there any toys actually released for the Original 80's V tv series?.
2