Visited Anderson Prototypes again today re: my machined lens housings. Unfortunately he hasn't started on them yet because he's been swamped with work. He even had staff in today on the weekend with him working away on stuff to catch up. Plus he had a semi-disastrous flood in his home to deal with.

But I brought in 2 of the 3 molded Nikkor lenses from Flimzy (3rd is going to nkg ) and we looked them over together and he believes they will be a big help. Brought in everything else of mine HAL related in too so he could see the rest of it and have a better sense of how everything was going to fit together.

He's very optimistic that he'll be able to match the original even with the threads and the lettering after examining the molded copies. His only regret is that he doesn't have detailed CAD drawings to work off of.

Wow...thanks for the FYI about the clear coat Eager to see what your guy is going to reproduce with those lenses.

Attempt #2 with Rustoleum x2 Gloss clearcoat worked perfectly. Finished plate looks fantastic with the silver showing through where the white used to be.

Was tricky getting all the air pockets out from underneath such a large decal but I pulled it off.
Next up, riveting it to the back plate.

j_holtslander said:
Attempt #2 with Rustoleum x2 Gloss clearcoat worked perfectly. Finished plate looks fantastic with the silver showing through where the white used to be.

View attachment 1483646
Was tricky getting all the air pockets out from underneath such a large decal but I pulled it off.
Next up, riveting it to the back plate.
Click to expand...

It really looks fantastic! I have to remember that: Hayes Waterslide Decal paper plus Rustoleum x2 gloss clearcoat.

Figured out how I’m going to present the gift.
(He doesn’t get to keep the case though.) 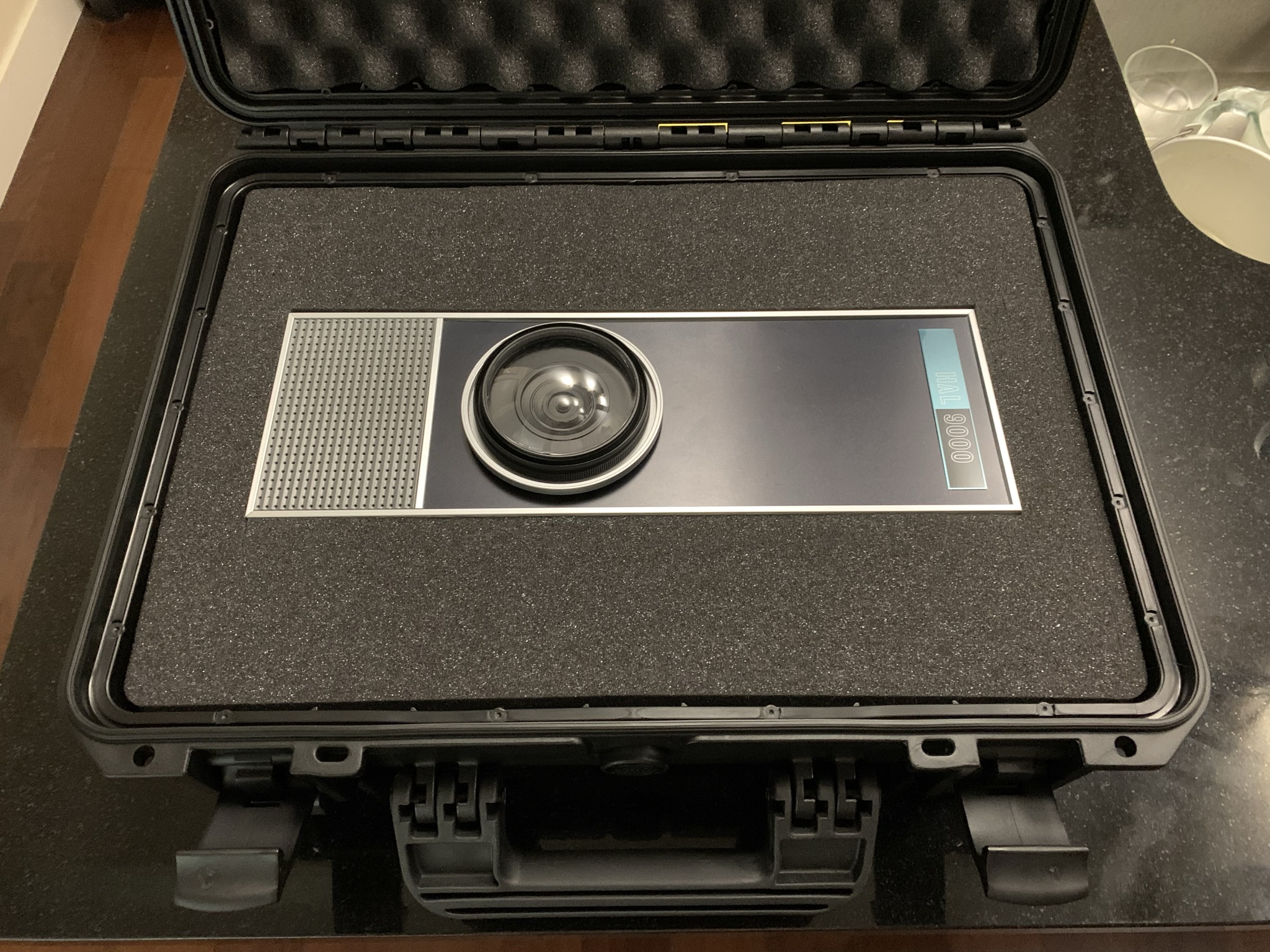 So for the back panel I’m epoxying in styrene strips to the frame (1mm thick) which will have holes drilled through them to accommodate some 8mm x 1mm magnets I picked up off of Amazon. Likewise the back panel itself will have strips attached with magnets within holes. These will have the benefit of also strengthening the back panel a bit too. (The metal is very thin.)
When the backplate is placed in position it will connect magnetically firmly enough and be flush with the rest of the backside of the frame. By having the backplate removable like this it’ll allow for easy maintenance. (Changing sounds or batteries)
Unfortunately I didn’t have a 5/16 drill bit so I used up today’s time doing a hardware store run for a drill bit set.
Here’s a pic of the back panel with the styrene placed in position and the magnets where they’ll be located. (Not shown is the second matching set of styrene strips and magnets in the frame itself.)

I’m going to need to be super careful drilling due to the strip’s width. 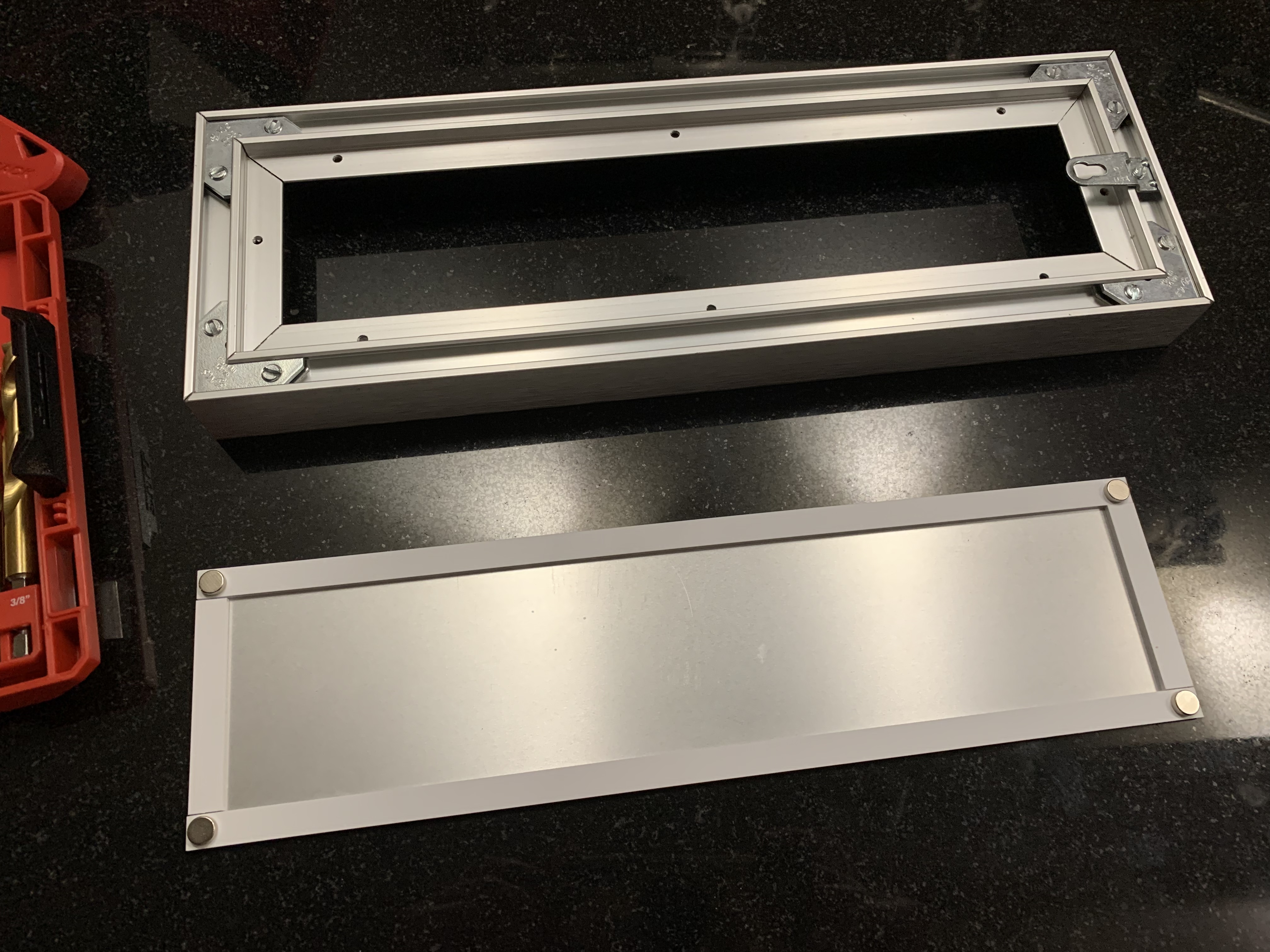 When the back side is done it should look something like this. 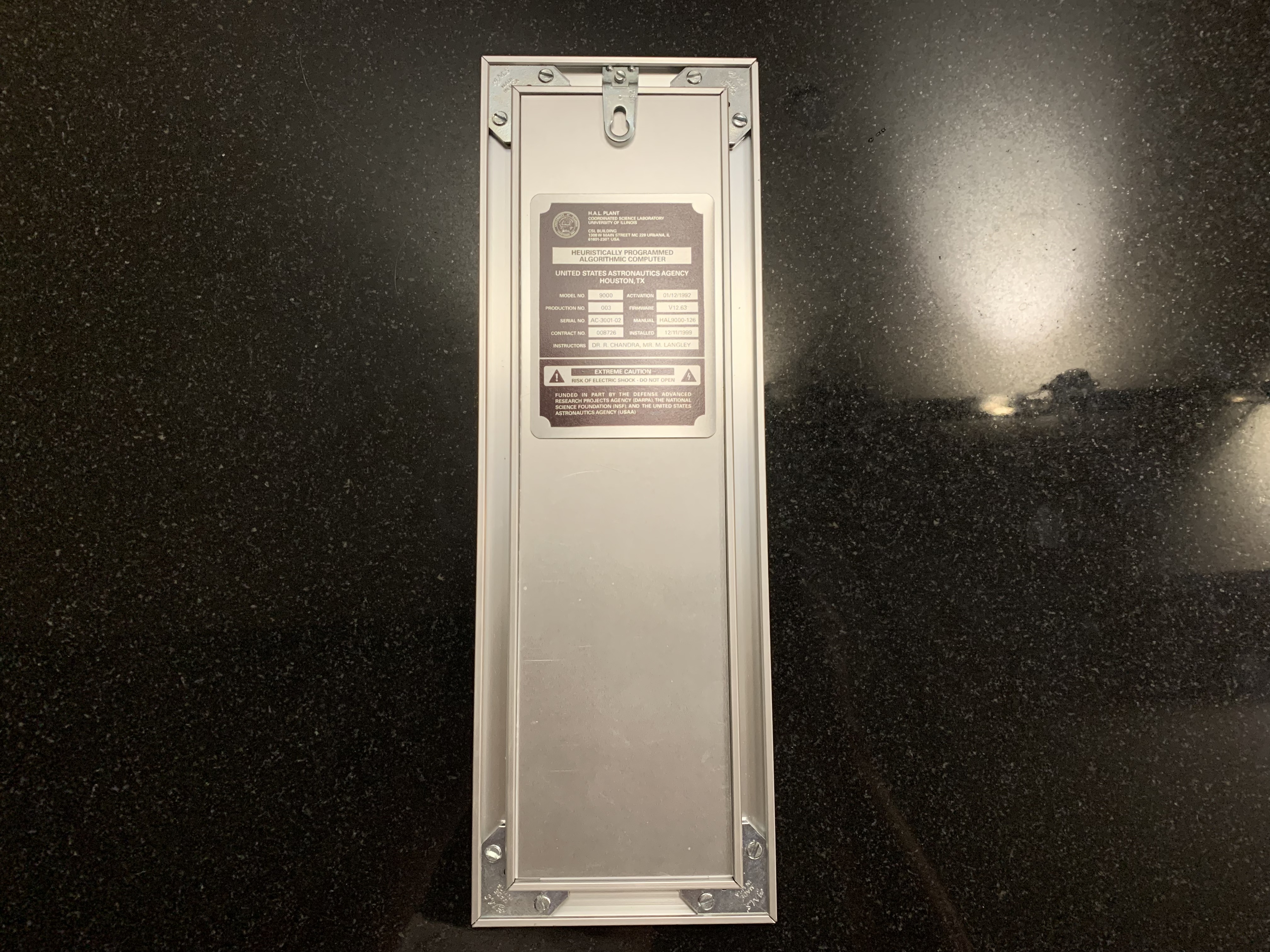 Are you doing a run?

Prop Collector said:
Are you doing a run?
Click to expand...

Yep, that HAL incased in foam is the bomb

I realized my backplate was looking a tiny bit unrealistic in how barren it is so I went to the local electronics recycling depot and salvaged a box full of broken computer parts for a couple bucks.

I'm thinking I'm going to fill some of the back plate space with some PCI card backs so it looks like HAL actually plugs into something. (Unless I can't make things fit well on the inside.)

I realize this will almost never be seen and that it's a bit of superfluous effort but that's just how I roll. Haha. 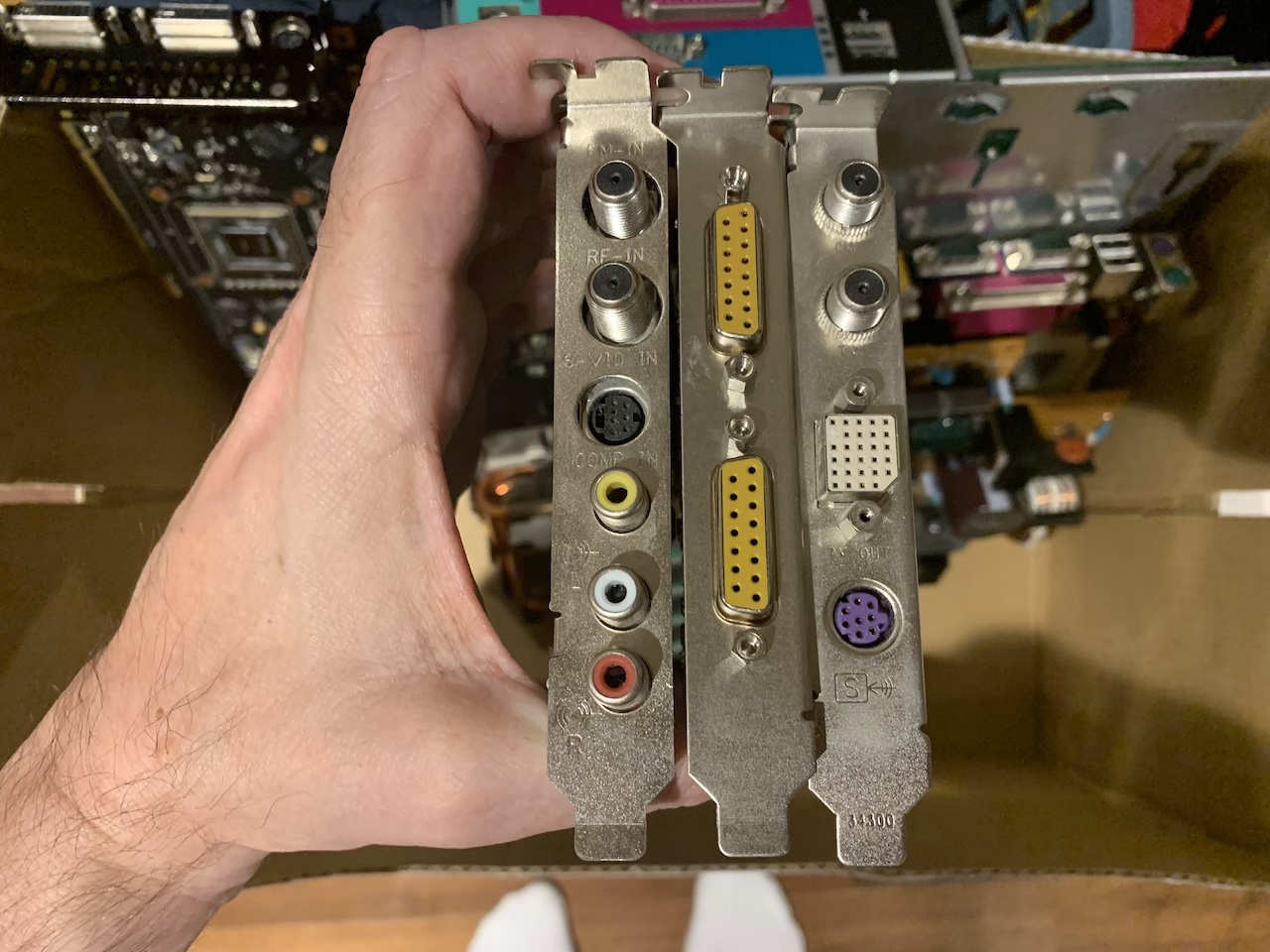 I picked up some grey ribbon to make a pull tab for the magnetic back too which I'll rivet in place. 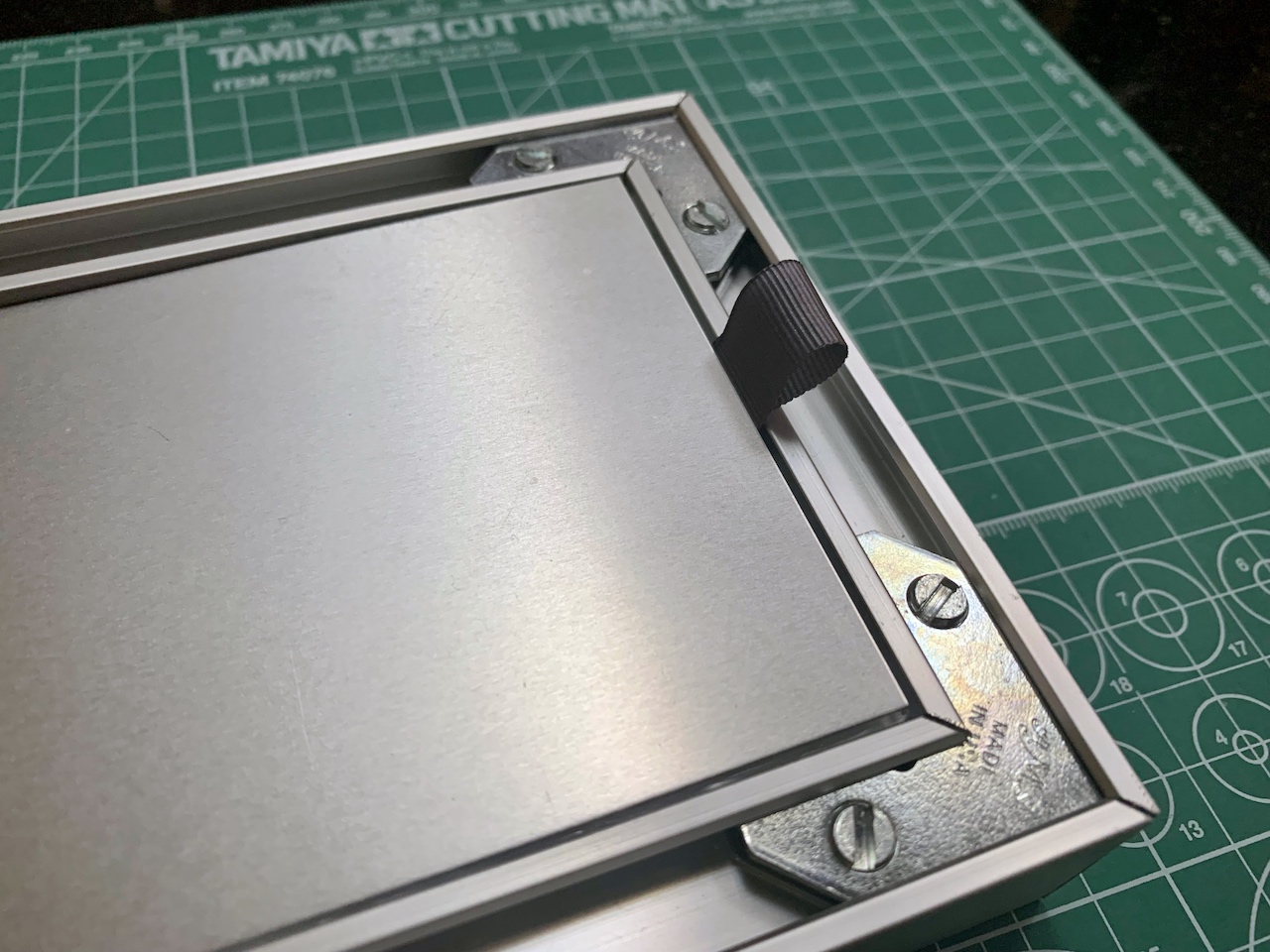 So once I realized from Flimzy's castings that there was a secondary lens behind the primary lens I started thing about what I could do for that on my HALs. I hunted and hunted for a lens that I thought I could stick behind the main lens and look good and I narrowed it down to 2 choices and then bought 2 of each.

Option 1 - This door viewer (aka peephole) off of Amazon. This is a VERY non-standard peephole. Much larger than your average peephole and a RIDICULOUSLY amazing field of vew. 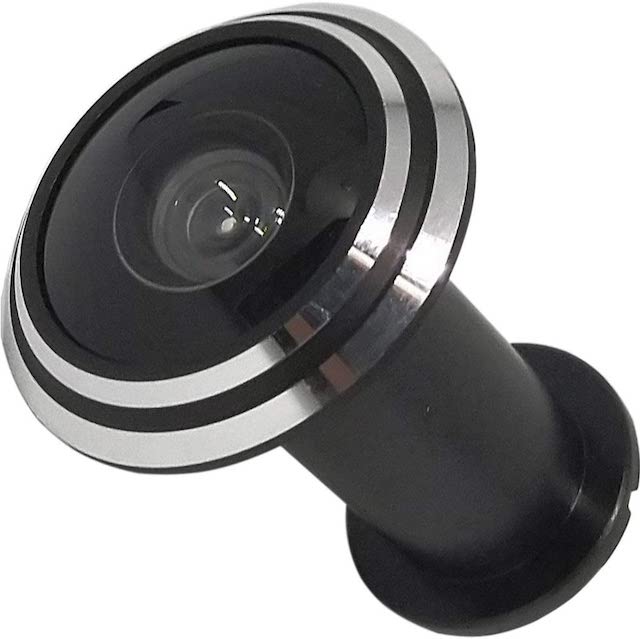 Option 2 - This cheap fish eye lens off of AliExpress that's meant for cellphone cameras. So cheap it was worth a shot to try. 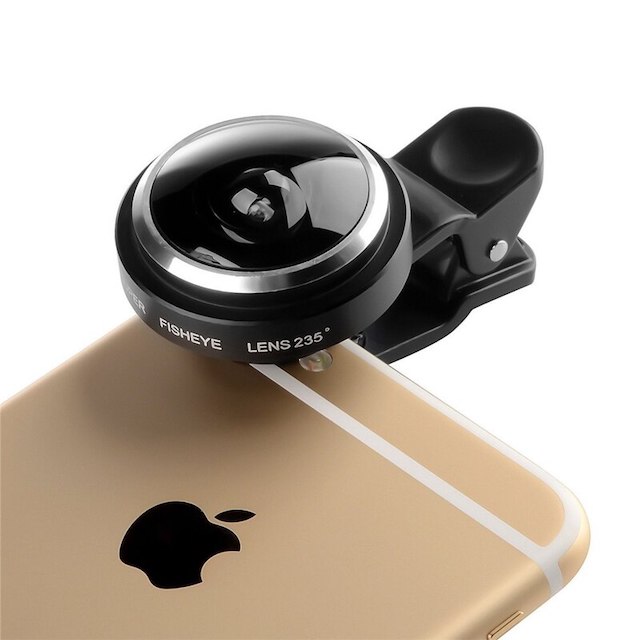 Miraculously both arrived on the same day and I compared them side by side. They're both large enough to fit well in the opening of the main lens with very little gap.

The cellphone lens is much lower quality than the peephole but actually looks much better in person than it does in its product photos.

The peephole's center was much more frosted white looking than pictured which was disappointing. 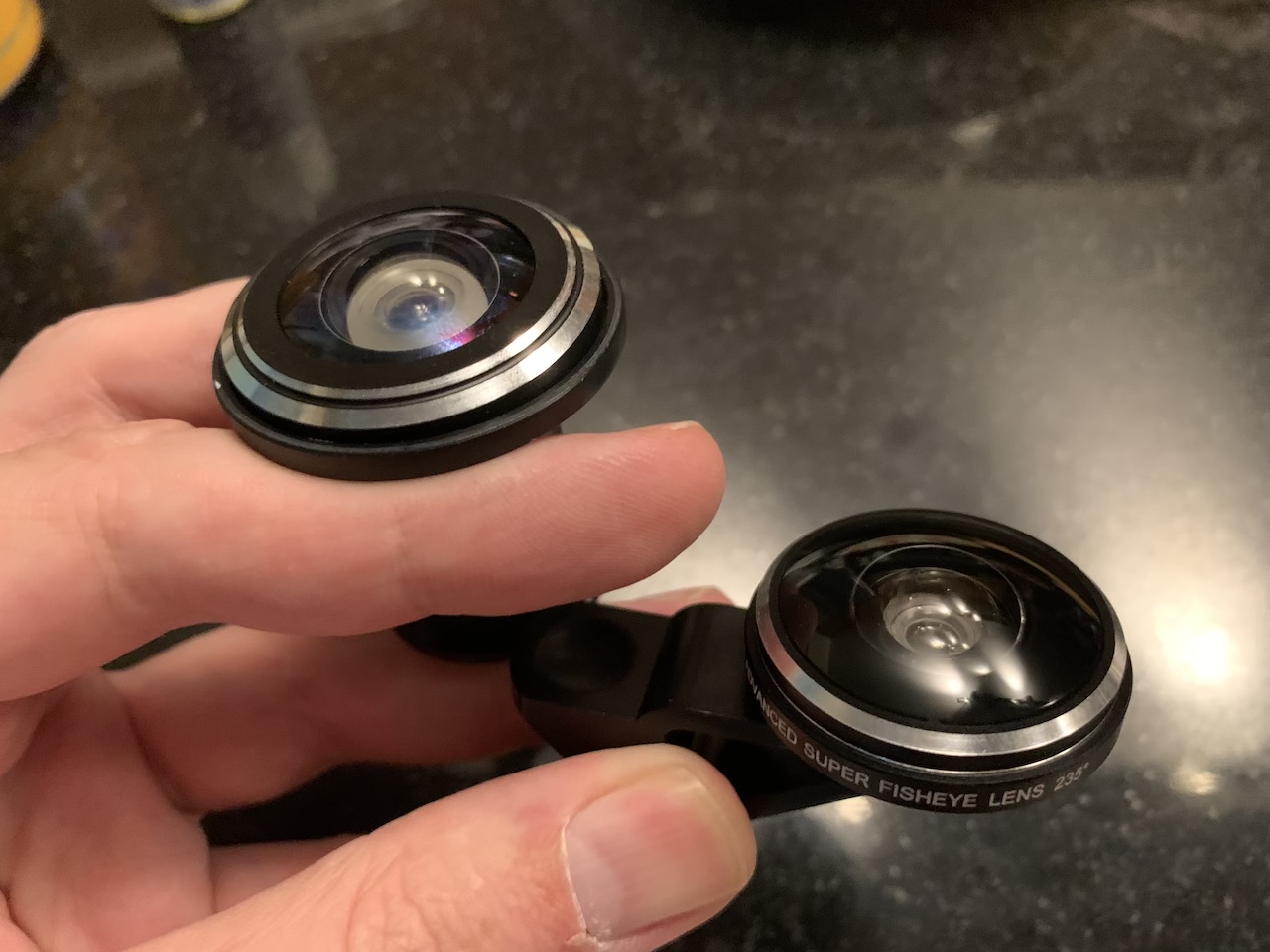 The next thing I tested was what a red LED looked like shining through them both. The cellphone lens was nice and bright and looked... good.

The peephole the light was diffused to an almost pink shade of light and it illuminated the frosted white looking lenses within giving it a very un-HAL-like look. Doh.

So overall the cheap cellphone lens is the winner and will likely be going into my HALs behind the glass lenses.

The peephole... Not good enough for HAL but holy cow as a peephole?... I'm 100% installing this on my front door! Thing is amazing. Holding it up to your eye you can easily see things beside you and if it had any wider of a FOV you'd be seeing stuff behind you! I highly recommend it as a peephole for sure, but not for HAL.

Yes! A second lens adds a lot to HAL's eye. And that fisheye (your option #2) really looks great. But before I order one: Do you think the lens can be easily disassembled for painting the silver ring black? Or would I have to do that with a sharpie?

Love the vid and yes...the winner is the fish-eye for sure

Markus said:
before I order one: Do you think the lens can be easily disassembled for painting the silver ring black? Or would I have to do that with a sharpie?
Click to expand...

The peephole can be completely disassembled with ease. Theres a lot more to it than I showed as well. It comes with extra parts for double stacked doors too. DM me if you want more details.
Last edited: Aug 20, 2021

j_holtslander said:
It can be completely disassembled with ease. Theres a lot more to it than I showed as well. It comes with extra parts for double stacked doors too. DM me if you want more details.
Click to expand...

No, I don't want the peephole one - I want the one that looks good
Can you disassemble the _fisheye_, to pain the silver region black?

My bad. The cellphone lens one… doesn't look like it. I think it's glued together.
I plan to carefully paint over the silver on mine.
Last edited: Aug 20, 2021

It occured to me to try and take apart the peephole and rearrange or omit some of the many lenses that are built into it to see if I could change it's appearance to something more HAL-like. After some experimentation I got it to the point where I now think it may be the better of the 2 options. Just painted the bezel of the peephole and will try that out next once it's dried.

The Hobbit / The Lord of the Rings Arms & Armour

Today at 2:18 AM
Remote People