Hey everyone. Not much to this, but I was excited about it and had fun with it, so here it is.

So I ordered a blank from JDF Studios. I went with the .93" ABS version. They offer a kit that includes straps and snaps and such, but I was committed to doing as much as I could by myself.

I started out by drilling out the holes. I have to give some credit to YouTube user auzorann giving the tip to use step drill bits. I was ready to use standard bits, and in hindsight, it probably would have torn the hell out the plastic. I started out drilling some lead holes, then bored out the full size on the second pass. I underestimated how long this would take. From there, I marked out where the eye holes needed to open, and then used my rotary tool's sanding bit to carve them out to shape. I should mention that I was nervous about screwing up on every step of this project, but this was particularly nerve-wracking.

I attached the snaps at this point. I went back and forth on when I should attach them, and realized I didn't want to risk ruining the paint later on. Putting size 24 snaps on a hard plastic CURVED mask is not particularly easy, btw.

From here, I taped off the snaps and prepped for paint. The mask came super smooth and glossy, so I hit it with some sandpaper and a scouring pad to rough it up, and gave it a coat of Almond Krylon (thanks to YouTube user Big Hush for this tip). Then I hit it again with some heavy grit sandpaper to give it some deep scratches and gouges, and gave it another coat of Almond.

What mask is that supposed to be the remake ?

After the paint, I started working on drafting out the stripes and chevron. JDF sold these too, but I'm a DIY'er so I used some reference pictures of the original mask from the movie to estimate sizes. I came up with a few different options and toyed around with combinations, then used my wife's Silhouette Cameo to cut out some decals. I taped around them to create some stencils and hit them with a few layers of cardinal red acrylic paint.

Kind of a jump here, sorry. I started the weathering by scuffing up the stripes and chevron. I'm stickler for detail, so I tried to match the wear on the screen-used mask as best I could. Then I started using some watered down shades of brown acrylic paint. My main tool in the weathering stage was a wet paper towel, just dabbing and wiping paint on, being sure to get into all the scratches I made with the sandpaper. Then I started adding some watered down yellow to give it that aged look. Then some varying thicknesses of black to make it look really grimy, again matching the movie version as much as possible. Then I used the sand paper again to scratch around the eyes and on the nose to give it an unevenness. Then gave it a once and twice over with the scouring pad. Then I hit it when a couple coats of flat clear coat and called it good.

I bought some 1" elastic straps and cut them down to size and attached the snaps. It was at this point that I realized that the film version uses a buckle/harness to gather the straps in the back. I was unable to locate it, so I did the best I could by stitching a loop in the top strap and threading the side straps through it. (This buckle is included in the strap kit from JDF, a custom piece they make in house. Womp womp).

This was a ton of fun. I've already bought another blank from JDF to make the New Blood (Part VII) mask, and I'm gonna have KANE HODDER sign it when I see him at Crypticon here in Seattle in May.


justice league said:
What mask is that supposed to be the remake ?
Click to expand...

Yeah it is, I guess I should have put that in the title.
J

You should have bought the NECA remake and custom painted it and added accurate straps . The neca was casted off the original mask and is very accurate out of the box .
The remake was made of resin not ABS plastic like the blank you bought its not accurate at all . Thats a recast of the Neca and a bad one . Looks at how funky the nose is . They are cool to make though enjoy .


justice league said:
You should have bought the NECA remake and custom painted it and added accurate straps . The neca was casted off the original mask and is very accurate out of the box .
The remake was made of resin not ABS plastic like the blank you bought its not accurate at all . Thats a recast of the Neca and a bad one . Looks at how funky the nose is . They are cool to make though enjoy .
Click to expand...

I can't comment on the origin of the cast, but I don't have an issue with it personally. Looks pretty close to me. As far as the material, it wasn't a huge deal for me, since this is just going to go up on a wall as a display piece.
J

Neca also sells do it yourself blanks just sayin .


justice league said:
The remake was made of resin not ABS plastic like the blank you bought its not accurate at all . Thats a recast of the Neca and a bad one . Looks at how funky the nose is.
Click to expand...

Is it really necessary to bash his item? Maybe he spent his hard earned money on this one and can't afford to buy a new one at this time. Trashing it won't make him throw it away and just start over because you don't like it. If you don't have anything nice to say, maybe just don't respond? To quote you: "just saying"!


barbquebutt said:
I can't comment on the origin of the cast, but I don't have an issue with it personally. Looks pretty close to me. As far as the material, it wasn't a huge deal for me, since this is just going to go up on a wall as a display piece.
Click to expand...

Ignore the trolling... I think you are doing a great job with it. I just wish some people had the restraint to bite their tongue and not trash someone's work. Did you possibly buy a bad recast with some quality issues? Perhaps. Do you need to be bashed and have the item trashed just to make the poster feel mighty because he can "school you"? Absolutely not. You are making the best with what you bought. Rock on and keep up the great work :thumbsup

I didnt bash his work he didnt make the mask .

I was trying to inform him about other choices some of which are cheaper and licensed .

if your feelings got hurt it was not the intent .


justice league said:
if your feelings got hurt it was not the intent .
Click to expand...

And thanks for the compliments Moviefreak and Cbstudios!
J

And thanks for the compliments Moviefreak and Cbstudios!
Click to expand...

Your doing a good job on the blank


justice league said:
Your doing a good job on the blank
Click to expand...

Decided to just change the title of this thread rather than make a new one.

Here's my new mask. F13 Part VII. As I said before, I picked this because Kane Hodder is going to be here in Seattle in May for Crypticon, and I want him to sign it. I saw that Part VII was his favorite Jason to play, so the choice was easy.

I wasn't as crazy about documenting this one as the last one, but here's what I got...

I ordered a black ABS blank this time around, since it was my understanding that the original from the film was black. Maybe that's not true, but it ending up giving me my desired effect.

Started by drilling out the holes. I have to state again what a lifesaver the step bits I used were. After that, I cored out the eyes with my rotary tool. I bought a standard axe slash blank, so I had to mark out my own broken cheek. I didn't get a picture of it, but I marked it out with a silver sharpie, and then again cut it out with the rotary, same for the axe slash.

I sanded down the sheen to get it ready for paint, and then realized, "Hey, these strap holes are WAY too high for this iteration of the mask. GOOD THING I ALREADY DRILLED THEM." So off to the hardware store I went to get some ABS cement. I filled in the holes to the best of my ability. They don't look great, but it adds character I guess, plus they're not all that noticeable with the paint. I drilled the new holes and used my rotary again to etch out some cracks on the broken cheek and put in some random pock marks.

I gave it a light first coat of just plain flat white. I sanded it back down in the areas that seemed most likely to wear with age, then gave it a slightly thicker coat of white which gave me the worn looking grey spots that I was hoping for. From there, I hand painted the chevron, as the original was. Just a simple red and black mix to get the right shade. This is actually the second chevron. I painted over the original with a darker shade because the first one seemed like it was too red.

Now a bit of a progress jump. This is the finished product, post weathering. I painted on a coat of really dark, almost black, brown and wiped it off. I put a little more age around the broken cheek since I figured Jason's rotting, waterlogged face would be rubbing against it. I added the rust after seeing some other replicas and I liked how it looked. Then I hand-painted the cracking damage on the nose and the mouth area per the screen damage.

I'm waiting on some leather and chicago screws to make the straps, and this one will be good to go.
S

Love the result! Would never have thought about black as a base.. excellent work.

Shinobi D1 said:
Love the result! Would never have thought about black as a base.. excellent work.
Click to expand...

Thanks! Yeah, this one and I believe the FvJ masks were black based. I could be wrong, and there could be more, but I'm pretty sure about those ones. But I'm glad you like it.

Just wanted to update this. Went to Crypticon Seattle this weekend and met Kane Hodder. It was awesome. 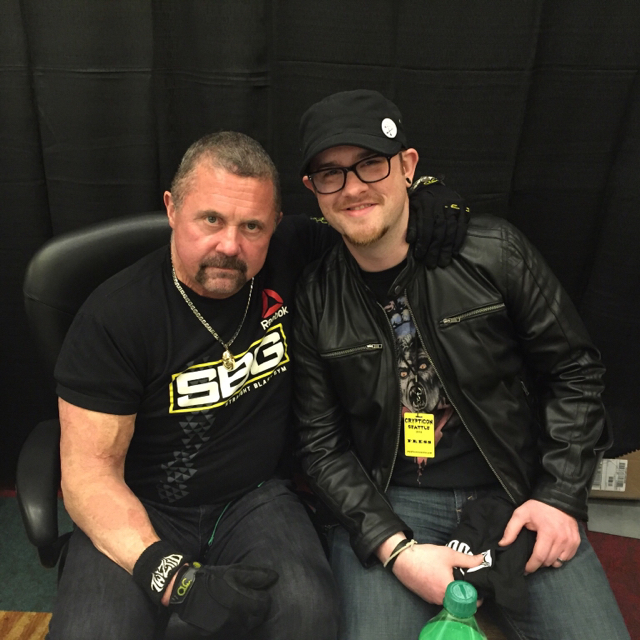 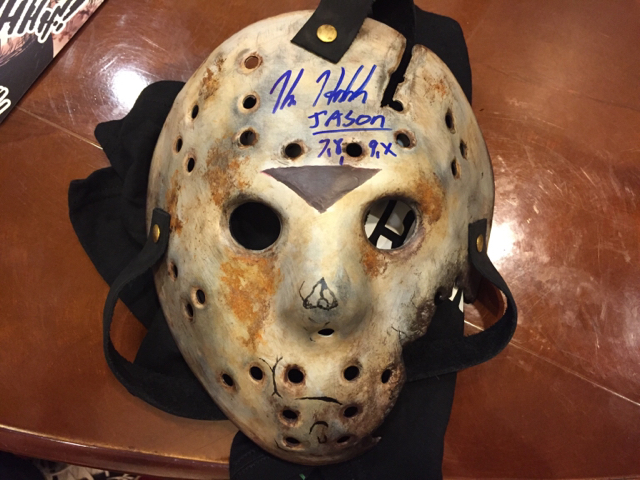