My Eleventh Doctor costume Series 5 and 6

RPF PREMIUM MEMBER
Since I'm on my DW kick right now, I'm in the middle of putting the costume together.
Rather than source the exact items worn on screen - which can become costly and difficult, I have been carefully purchasing items that have the same general look without straying far away at all to the on-screen counterparts.
The jacket is from a British label "Austin Reed" in a 38R and is an Ebay purchase.
The suspenders just arrived today - burgundy color, 1" wide. I may get the navy ones they sell soon...
Bowtie is a cheap satin which I am soon replacing with a deeper colored silk one I have on order. The bowtie pictured looks awfully red in the photos but is a deeper burgundy in person. This satin tie is OK but I feel the sheen to it contrasts too much to the rest of the outfit and is too "tuxedo-ish" for the overall look.
The jeans are JC Penny Arizona brand skinny jeans. For only $19.99 they were not a bad buy at all.
Still on the fence about the shirt - I would like to sweat it out until Magnoli gets his 11th shirts out for sale. The shirt I am wering in the photo is simply a stand-in for the pic, but I do have a white-on-white striped shrit (Calvin Klein) that is similar to the one he wears in a few episodes (I think the Christmas one) but that is currently at the dry cleaners
The boots have posed another problem since the AllSaints boots are not only rare, but have increasingly become more valuable on the secondary market.
I have ordered a pair of "close enough" boots (pictured below) which I will be modding to be more accurate. Rubbing off the black color and recoloring the leather dark brown, then cutting off the top of the upper and replacing it with the "layer" look should be fairly simple and will give the general look to the boots.
Here I am so far....keep in mind this is a work in progress:

Looks pretty cool, the jacket and shoes are very good. I agree the bowtie looks a little "shiny".
During the summer I want to put together a 11th doctor costume as well, same as you, an exact copy would get expensive. I'm looking forward to this costumes development.


Ciwi said:
Looks pretty cool, the jacket and shoes are very good. I agree the bowtie looks a little "shiny".
During the summer I want to put together a 11th doctor costume as well, same as you, an exact copy would get expensive. I'm looking forward to this costumes development.
Click to expand...


Yeah, I have a new bowtie coming to me that will be much better.
I'm actually looking forward to modding the boots. Who knows, if it works out good maybe other cosplayers will do the same.
A

Awesome looking costume! Great job... post pix with the new flatter bow tie when you get it.

You're on the right track. The bow tie would be my biggest complaint, but you're already on top of that. The boots look like a great match, and once you mod them will look really good.

The Dinner Theater I perform at has a few costume designers which will hopefully be willing to assist me in sewing up the layered uppers for the boots when they arrive. If anyone wants a link to the ebay seller I got them from to buy and mod as well, let me know.
Here are the tie(s) I am getting. The sale came with two of them so maybe if it looks just as good in person someone here might want to buy one from me?
These look to even be a great color match to the suspenders I have and since they are silk and not satin, they will not have that shiny tuxedo look to them:

Wow quite cool! If you don't mind me asking, where did you get the new bow ties?


danfish32 said:
Wow quite cool! If you don't mind me asking, where did you get the new bow ties?
Click to expand...


Those were an Ebay find
The listing said they were vintage stock so I'm not sure if they can be bought elsewhere but I will check the label when they arrive. Hopefully they look just as good in person as they do in the photos - if so, I would say they are pretty spot on for the burgundy tie.

The new bowties arrived today. Thankfully, they DO look just as good in person as they did in the photos, and as an added bonus they are almost identical in color to my suspenders so they pair very well!
The tag says "Invizo" as the name label. I will look into where more can be bought if possible.

My burgundy and navy "MS: Matt Smith" shirts came today and I could not be happier! The color of the burgundy is a perfect match for my suspenders and bowtie - my boots are currently in the hands of a leather worker from my job who will be transforming them into closer look-alikes to the AllSaints boots.
Once those are done, I will get some good photos taken and post them here. I'm very excited to share this costume when its all completed!

Just got these back the other day. We have a lady that works for us at the dinner theater that does leather work and she modified the boots for me. All in all, they are not perfect BUT they look pretty good for not being AllSaints, and for the total price I paid for them, they are great "close enough" boots and look good with the whole outfit on.
Still waiting on a good day to get full body pics of my costume though, so stay tuned:

These boots are a novel way to achieve a stunningly good result.

They are certainly as good as the recent Magnoli boots, if not better.

How much did they cost all in ?


pumpkiny said:
These boots are a novel way to achieve a stunningly good result.

They are certainly as good as the recent Magnoli boots, if not better.

How much did they cost all in ?
Click to expand...

Nice! When does the group run happen?
P


davidnagel said:
Nice! When does the group run happen?
Click to expand...

It's E-Wan you should be asking - he's had a local shoemaker in Los Angeles make some for him.

You can see them here:
11th Doctor Blog | Going the extra Step 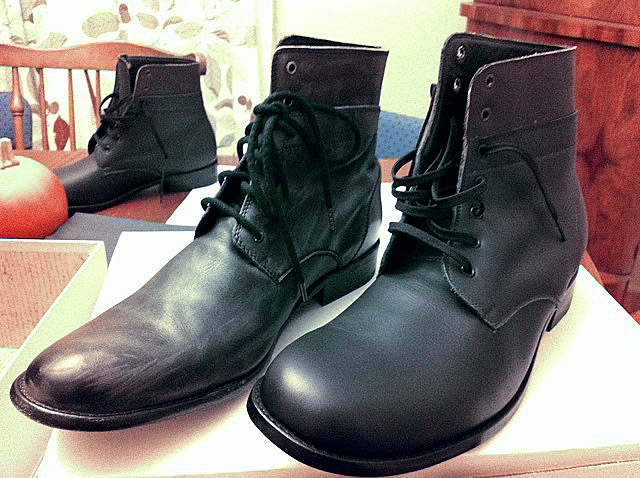 All Saints on left - replica on right - not perfect but a good option.
B

It's not a tough replica to make - you just need to find a suitable pair of 'base' boots to convert which is really not all to hard because excluding the layered upper, the overall look of the boot is pretty standard in design.
The ones I used I bought from an ebay dealer in China. One of the things that caught my attention was not only the overall look, but the shape of the toe and no rugged tread.
I was thinking of pitching the idea of making Who costume replicas to Todd @ Toddscostumes.com since he has a proven track record of replicating the Indy gear pretty well and at unbeatable prices.

I've seen a number of copies of the Layer boot crop up recently. There's some really great work in some of them, including the pair on this page.

Here's one piece of constructive criticism. I own fair amount of clothes and boots from Allsaints - they make really nice things. It's the details that make the layer boots so cool, especially the "witchy" angle of the sole and the weathering on the boot. This is one of the things that makes the costume work, because the boots help offset the geography teacher outfit.

Anyway, my point is, choose your base boots carefully for the best effect!:thumbsup
Last edited: Aug 7, 2011