RPF PREMIUM MEMBER
Thanks for the advice. A drill jig seems to be a great solution that I didn't even think of. I'll definitely get one.

I'm a bit limited on my flash hider moounting. The short barrel is doing me no favors unfortunately. Based on my rough measurements, the back of the hider sits about 2.5" from the seam of the barrel base where it joins the upper reciever.

After cutting down the front sight I realized that little large barrel bit the sight was on is all the adapter can cover as any further back starts to impede on that 2.5" space and means the barrelk will be too short. It's not a lot of grip space for the adapter. 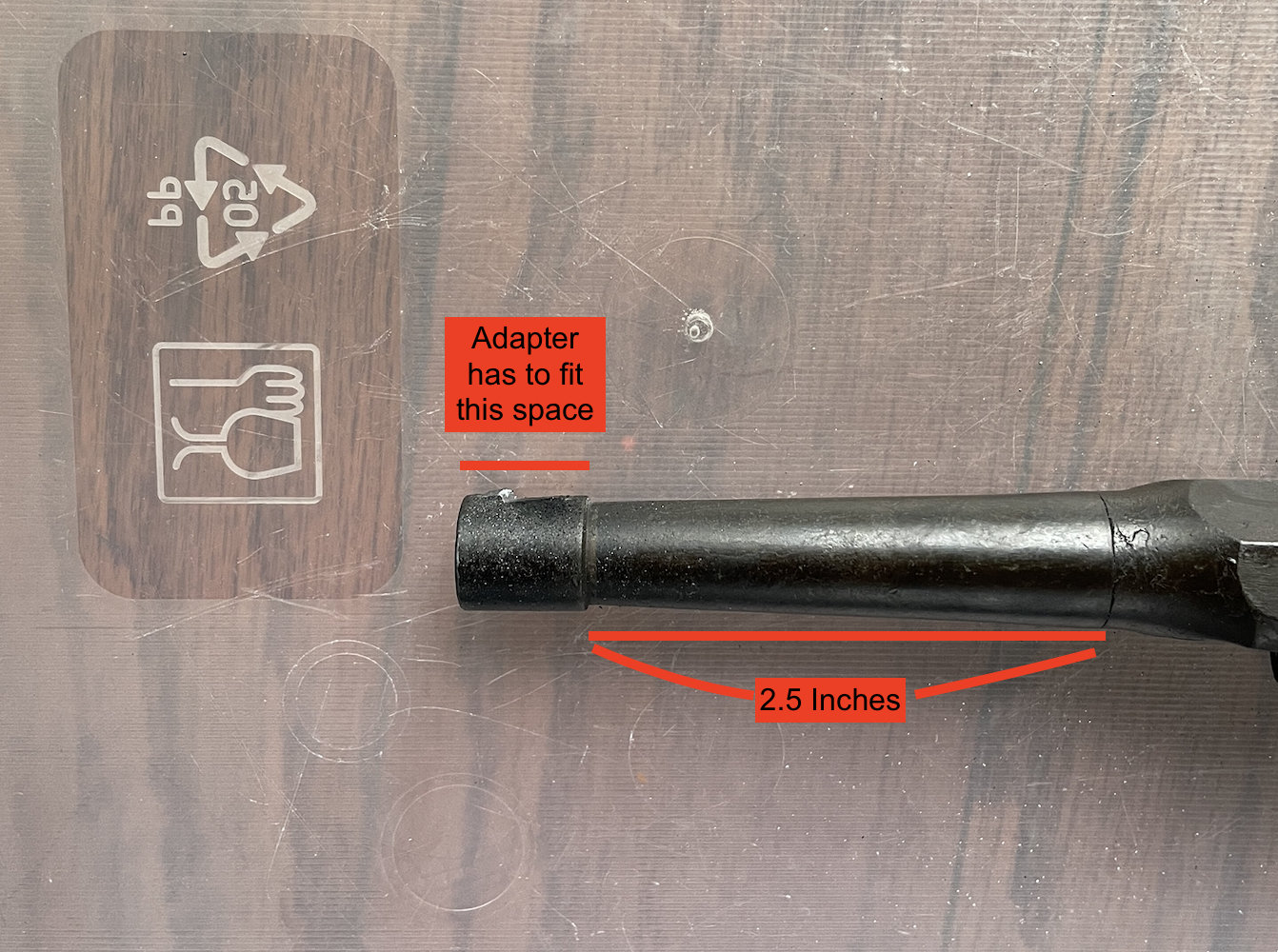 I'm ggoing to try a hard rubber grommet idea and if that fails, I'll just bring the upper to Home Depot and rummage parts sections to find a solution in hand.

RPF PREMIUM MEMBER
Not 100% sure about this, but the taper of that barrel may look a bit off for a GK once that flash hider is on. Possibly something that could be accurized with some careful sanding, though. It also may not end up being very noticeable.

MastahBlastah said:
Not 100% sure about this, but the taper of that barrel may look a bit off for a GK once that flash hider is on. Possibly something that could be accurized with some careful sanding, though. It also may not end up being very noticeable.
Click to expand...

Yeah, the taper was the only concern I had with it. I think that's why Tom recommended a Jedi build though I'm not sure about the taper working for that either. I've still waffled a bit on using this for a Greedo Killer as the stampings being present aren't a match either.

I found these various sized rubber grommets. Two of them with slight adjustment did the job.

Love this as a solution. No scratches...
Fantastic how that hider cleaned up man.

RPF PREMIUM MEMBER
The rubber is nice and it's quite solid too with little to no give or play which was a concern.

The hider is not perfect which is perfect, lol! The wear on it is just enough to show some nice patina and age. Thanks again.

I opted for the Solo's Hold Heat Sink for the build as it seemed most on here agree it's the best interpretation. It was ordered over 2 weeks ago but not a peep on it shipping or any response to my inquiries about it so far. No rush but I may just get one from Field Marshall if I don't hear anything soon as I'm too antsy.

I did finally get all of the various scope rings I wanted and it'll give me a lot of options. (Lettered Pairs as Marked)

Based on the consensus here, pairs 'D' and 'G' have the most optimal rise. Though as seen, there is a difference between 'D' and 'G's shape. Which of those is more likely to be the one? 'D' appears older with more detailed engravings I think?

'A' and 'B' fit the archive photo better and 'A' has a smaller wheel than 'B' so maybe they were mixed and matched though their profiles differ. I actually got 'C' as well with intent to maybe wheel swap on one of those to give it a smaller wheel but mechanically seperating them is hard as they don't have the notch where you can pull the tightening rod out easier and pulling them directly out is an issue, at least with mild force so far.

'E' and 'F' are the more screen accurate one's but apparently sit too high and don't look good, but I figured I'd get them and see for muself as I couldn't find many reference photos on here with that build.

Overall, I went crazy on Weaver Scope rings but they are good for reference so doesn't hurt to have them all in one place.

I decided to get a K1.5 scope as well as my previously purchased K2.5 as it was recommended the 1.5 is a better length (sorry, I can't recommend who noted that but thanks as I think it will be better) and I'll post those two together for reference once the K1.5 arrives.

Other than that, I can't wait to get going again.

RPF PREMIUM MEMBER
I did a rundown of the various scope rings used on the GK in my build thread ... may answer some of your quetsions:


MastahBlastah said:
After hunting for some time, I think I've acquired the accurate scope rings used both on screen and in the famous post-production photos. Here's the GK in three different configurations:

If you look closely, you can see that the two scope rings used in the post-production photos of the GK are mis-matched. They are of a different shape than those used on screen (common "football" shape), and although they are very similar in design to the Weaver rings, I believe these were made by a Japanese company called "Tasco". The wheels are very close to those of the weaver rings, but there are some notable differences (outlined below) and the Weaver wheels' threading doesn't match these.

I'll be keeping it in the "post-production" configuration for now, as I don't see many GK's sporting these style rings!

Setting this on the shelf for now, on to other builds. Stay tuned!
Click to expand...

And intresetingly, the 'A' and 'B' I have have a similar sloped profile with rings that are small and large matched as well. Just a different imprint on the exterior oof the knob. Cool.
Last edited: Apr 5, 2021

RPF PREMIUM MEMBER
I waited quite a while for my Solo's Hold heat sink to ship as well, but it eventually showed up.

I have a Field Marshall heat sink that I didn't use and therefore have no use for now - if you're interested it might save you a little bit of cash on shipping.

The 48th Ronin said:
I waited quite a while for my Solo's Hold heat sink to ship as well, but it eventually showed up.

I have a Field Marshall heat sink that I didn't use and therefore have no use for now - if you're interested it might save you a little bit of cash on shipping.
Click to expand...

Thanks for the offer. I'm going to give it a bit more and see but I'll hit you up if I change my mind.

RPF PREMIUM MEMBER
regarding your scope rings. If you want to do the film version, only those from E to G are the good version. Now, the actual film prop has according to me, the high version, E. But most people use the low version G that looks a bit more natural out of the holster. the medium version will be a good compromise between the two.

RPF PREMIUM MEMBER
Thanks for all of the reference's everybody. It's much appreciated.

I decided to get a Todd's Costumes Denix based grip for this build and I'll rework it if needed to fit the MGC. Looking forward to that. I tried some cast resin grips but I'm not a fan of them. Wood just feels better.

RPF PREMIUM MEMBER
Wow, so much more dynamic range in the VHS version of that shot!

RPF PREMIUM MEMBER
Definitely leaning towards the tallest ones of mine (E) for my build.

View attachment 1443480
I found these various sized rubber grommets. Two of them with slight adjustment did the job.

You don't even notice that barrel taper once the flash hiders on. Awesome job btw!

A new Chewe in Germany