My Custom Lightsabers on the cheap…

Hi there everyone…
I've been following TRPF for a while and though I'd share my own stuff to have your feed back :$
I've always wanted to build lightsabers of my own design and for that I've been collecting many bits & pieces, either junk, secondhand trade or yard sale stuff and stored them by shape or eventual use.
When a Star Wars Flashmob was being organized in my city for the release of the phantom menace in 3D I thought it was the time to make some for my friends to have something in their hands for the occasion.
Considering the short time I had, the goal was not to make illuminated blades, but rather PVC tubes with fluorescent paint. That being said I added an effect with photoshop for the photos of the painted sabers, because, let's face it, it's so cool! :cool Also they look battle damage because I didn't have the time take the photos before the flashmob :rolleyes 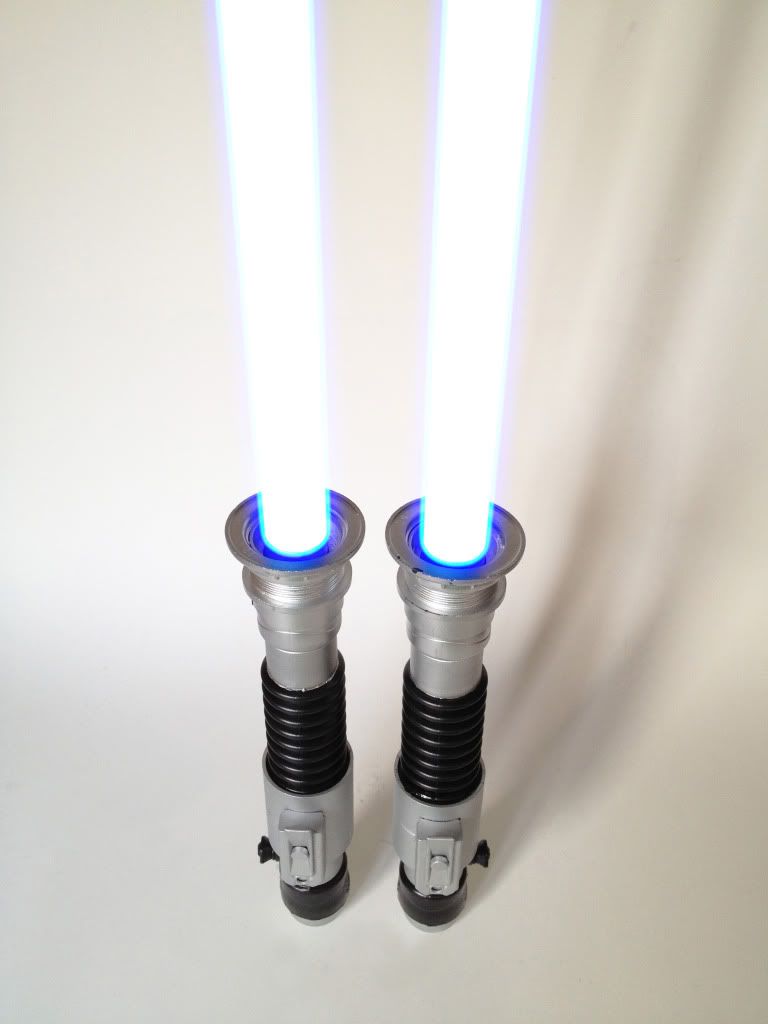 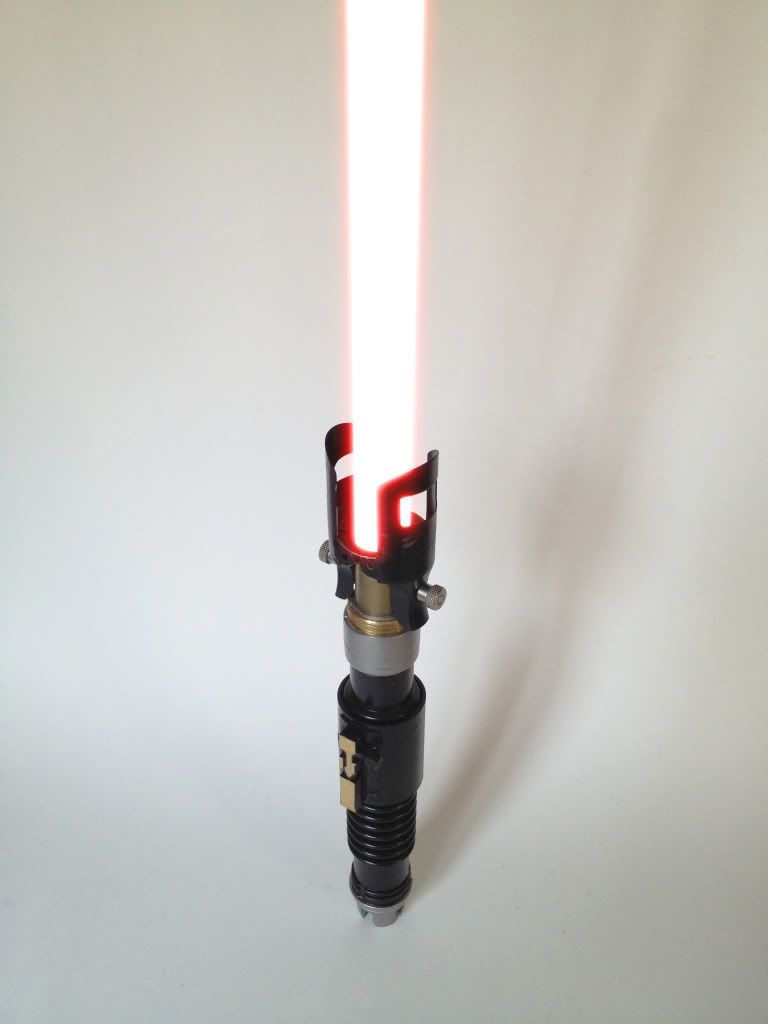 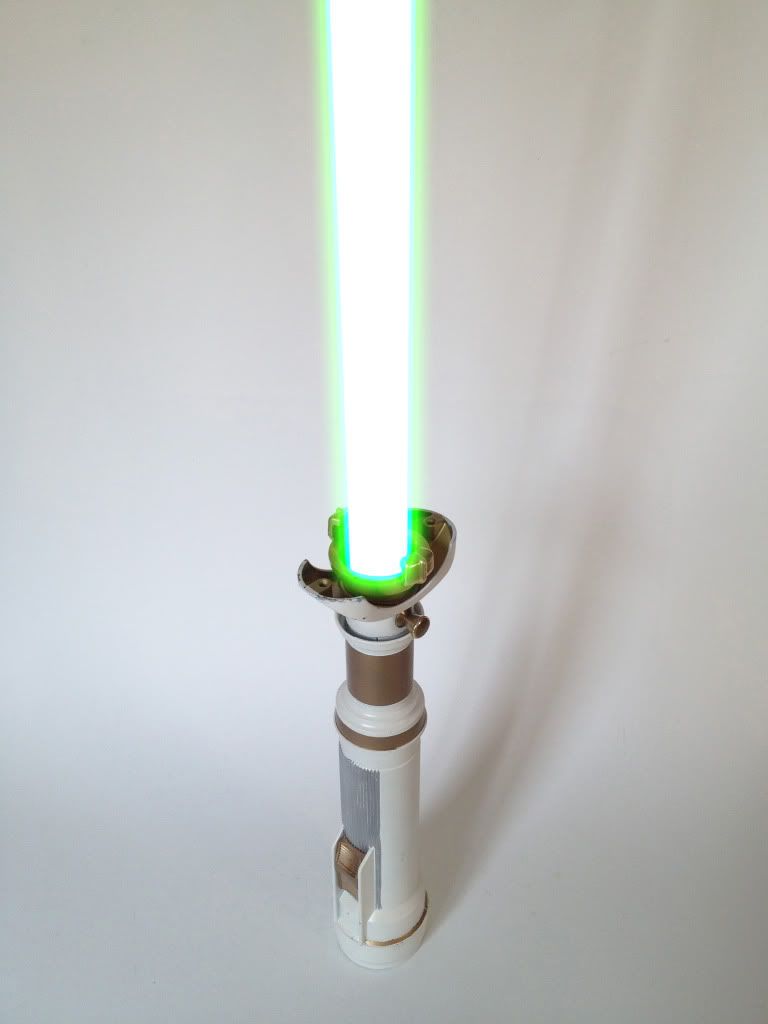 I cant belive how few parts there are to this. It looks so complicated when its all together. great job, keep it up. the force is strong with you.
C

These are great! I agree with Strength, it's crazy how few parts went into these. Definitely keep going, they'll only get better!
L

these are very nice. makes me want to run out to the hardware store and attempt one of my own

Lost21stJedi said:
these are very nice. makes me want to run out to the hardware store and attempt one of my own
Click to expand...

That's the spirit Lost21, some day I may do some more E27-flex and make a thorough tutorial of it…

RPF PREMIUM MEMBER
These are awesome! :thumbsup I always wanted to make my own style sabres for my kids myself. I've been collecting bits and pieces over time for just that reason. I havn't got enough to make them yet, and things to use for the emitters seem to be evading me at present, but I'll get there. I've never made sabres before, so a tutorial would be most welcome from you good sir. Very inspirational stuff.

What do you use to bond the pieces together by the way?

RPF PREMIUM MEMBER
Hey, these are great! I too can't believe how little parts there are to these, the first one is my favorite. That flex pipe is a little hard to find in my area, but man I have to hand it to you. Keep up the creativity!

Ingenious! To the average onlooker I bet they looked no different from the crafted metal hilt ones. You even added some nice touches, like the covertec knob.

Canobi said:
What do you use to bond the pieces together by the way?
Click to expand...

To bond the pieces together I used portions of a salvaged tube (from an iron broom stick) that happend to fit nicely around the PVC tube. I could simply have use longer PVC tubes instead, but wanted to be able to pull of or replace the blades anytime…

i like these types of patchwork jobs better than many of the super-accurate screen replicas. of course I'm typically more interested in props for use at conventions and such as part of costuming than I am in having a collection of screen-perfect replicas.

good job, the cheap projects are the really fun ones!

Holy crap. These actually look very nice. A lot of people make really ugly hardware sabers, sticking random bits and pieces together, but you seem to have found a lot of parts that look like they really -belong- together on a saber. Very nice. Welcome to the forum.
J

Great work with the found parts you had! Some of the best looking hardware sabers I've seen, especially your Sith one. Reminds me of some of the saber designs for the Knights of the Old Republic era! :cool

Etewaf said:
Holy crap. These actually look very nice. A lot of people make really ugly hardware sabers, sticking random bits and pieces together, but you seem to have found a lot of parts that look like they really -belong- together on a saber. Very nice. Welcome to the forum.
Click to expand...

That's exactly what I love to do, to choose the pieces so wisely that it looks like they belong together.
This idea of creating something out of found objects is as old as humanity, but with my reading making of books of Star Wars I discovered there was a way to do wonders with that concept, like for instance the original trilogy lightsabers, I'm simply following the same principle. But I've been doing this since a long time so I guess I developed an eye for this

savmagoett said:
That's exactly what I love to do, to choose the pieces so wisely that it looks like they belong together.
Click to expand...


Yeah, that's what everybody says, but you've actually managed to do it. Being a master of craptatsic hardware sabers myself :lol, I am mightily impressed. Even where I know exactly what parts you used, it does not detract from the overall design.

RPF PREMIUM MEMBER
At school where I am, the maintenance dept. bought (most likely) the cheapest kind of faucet knobs they could find. Unlike the ones that bigyellowbox uses (great size but very geometrical design on them) these have 6 or so swooping ..bumps or ridges? not sure how to describe them, but much nicer looking.

something like these Shop Danco Faucet or Tub/Shower Handles at Lowes.com

These are great, absolutely love your work!
I'd love to see a tutorial of how you made these and work on one of my own. Subbed in hope for much more!

Looks like a trip to B&Q tomorrow for me. I find this forum truly inspiring!
E