Thought it was time to make a topic about this. My first bio (in many ways, also) ever and my work on it; the Mr. Giggles bio. Or as I like to call him, GIGANTOR. I didnt know bios were so BIG, I mean, one sees pictures and all but damn!


First I would like to say THANK YOU to DAMAN for turning my design into something concrete and badass,
secondly that it was fun as hell to work on the bio, and I am pretty sure there will be more in the future! Maybe not as many as Bryan... but darn close.
It was really fun to work with the bio, I now understand how much work it goes to just preparing a bio with cutting it, sanding and everything else that is needed before anyone can even think about painting it.


So, I wanted to keep pictures at a minimum so I edited together a few in two steps, "preparing" and "paintjob". After them comes the (probably) finished paintjob. I say probably, because Im not sure if its finished. It still needs a protecting layer, and lenses etc. But I cant spray it before I've decided that the paintjob is done. I will post an update when that is due.

I will not be posting a huge tutorial on how I worked on it, I just followed Jasons great tutorial and it worked perfectly.


Allright, (full view is recommended for these pics)
so I began with drawing areas that needed a bit of work. Then I began the neverending work of cutting, polishing, sanding and aslo adding Epoxy putty on the dome tail that I wanted to change a bit. I say neverending because as a beginner at this, it took time to learn how all the materials worked like the epoxy and dremel. With that said, yes, I made a blooper with the dremel. But I fixed it. 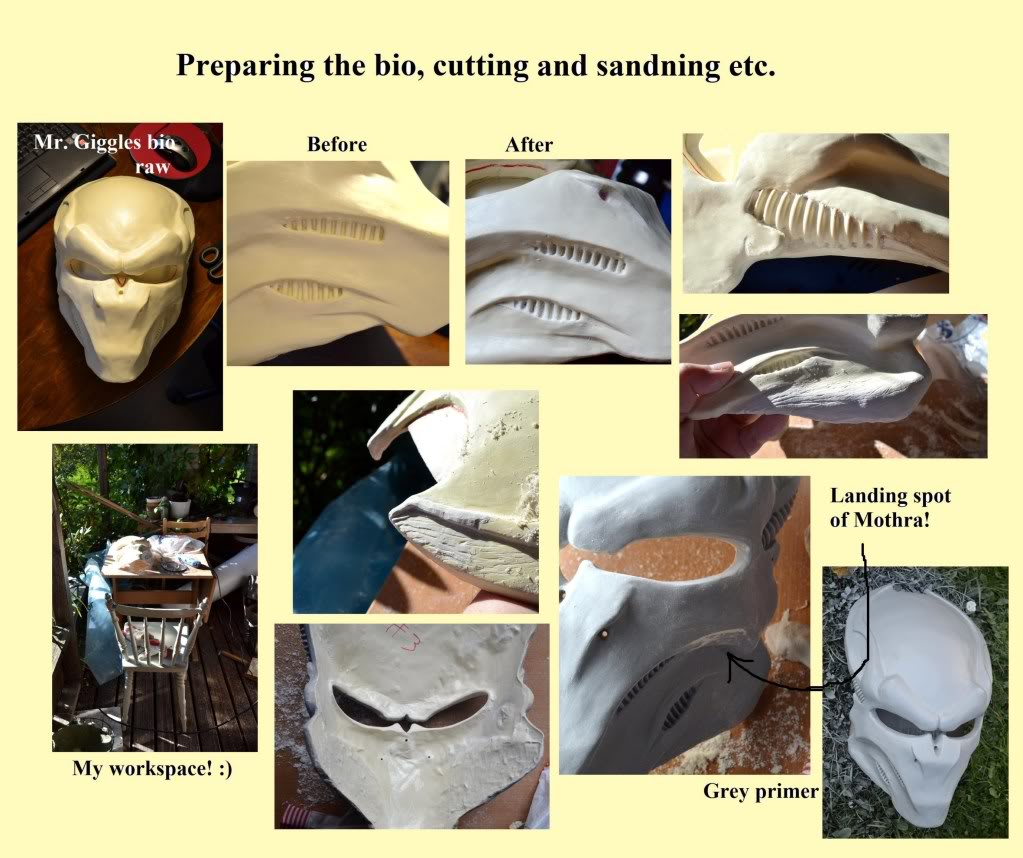 You might be wondering what the "landingspot of Mothra" means. Well, I was priming the bio outdoors and covered it with a cardboard box and later when I return for a new layer, a huge moth had landed on the bios cheek.
"You better make a nice texture!" I roared. It didnt. So I was to return back to sand it away.


After primer, it was time to paint it! 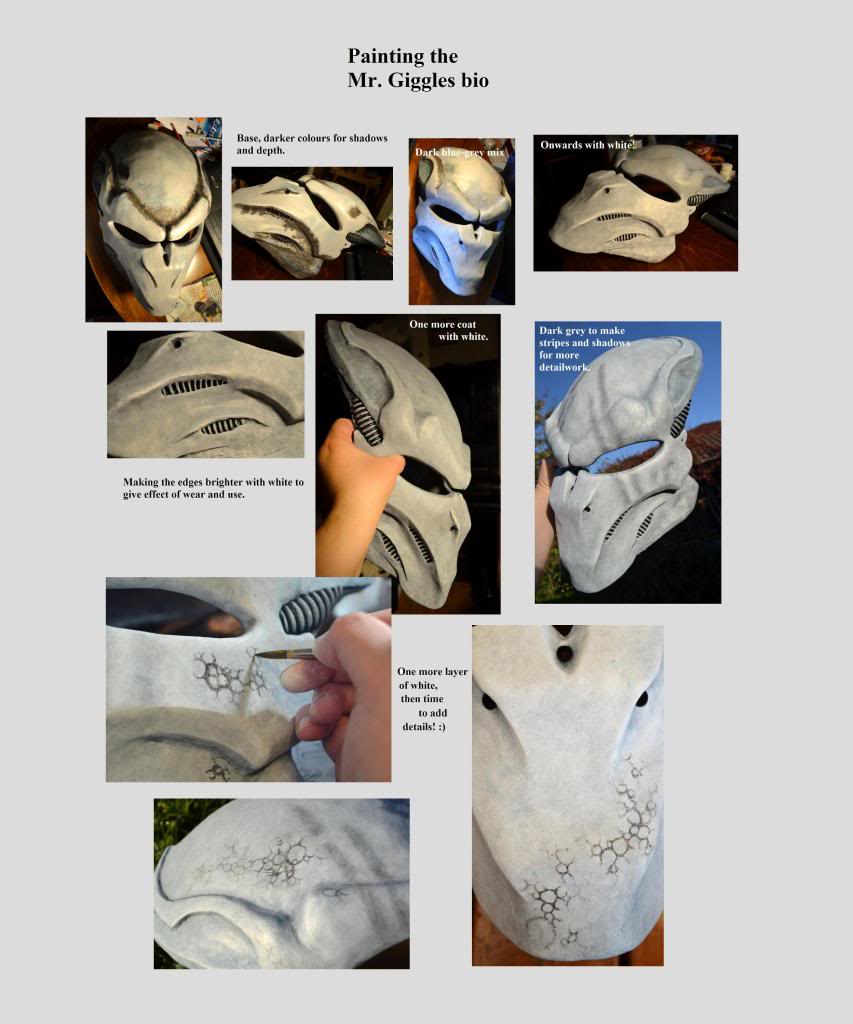 With the paintjob I also followed Jasons huntorial. I used Acrylic paints, bought at Clas Ohlsons for you Swedish fellows on here. I used a sponge for the layers, began with a darker colour, then added a dark blue-grey and later white.
After the layers were complete I started with the details. I wanted to make it as close as my drawing I did earlier of Mr Giggles and it worked quite well. I used a brush for the black circles, took some time to get them right but I like how they came out.


Now on to (probably) finished paintjob: 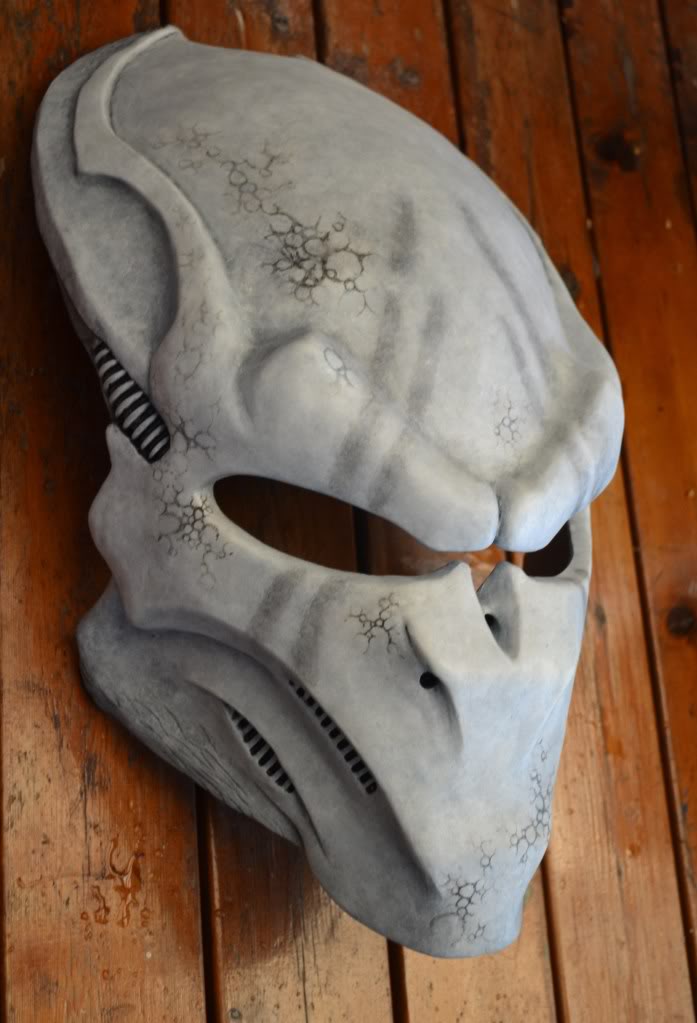 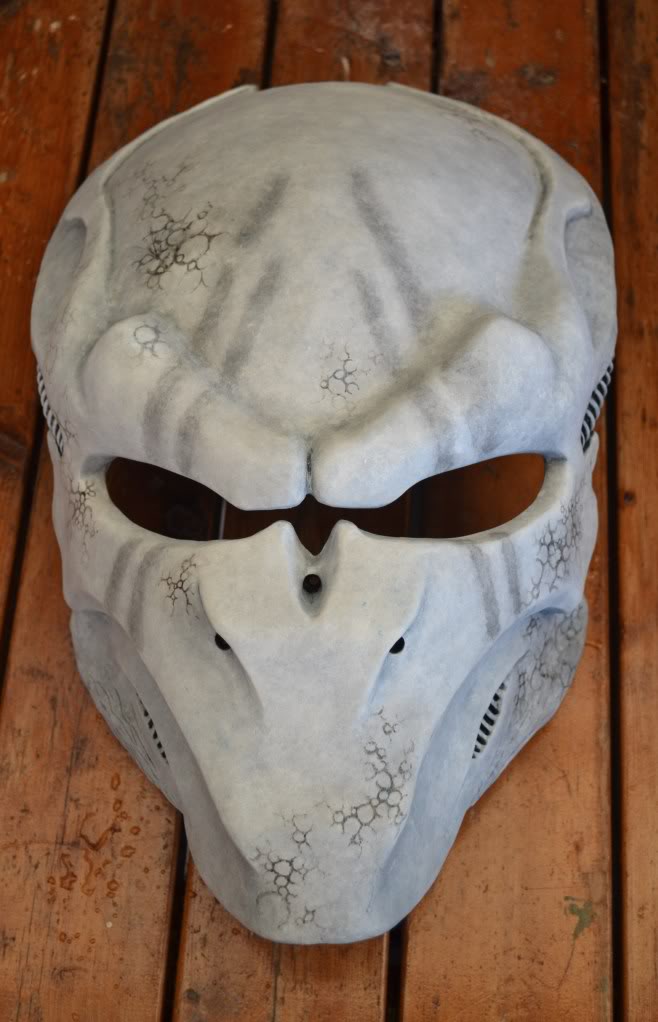 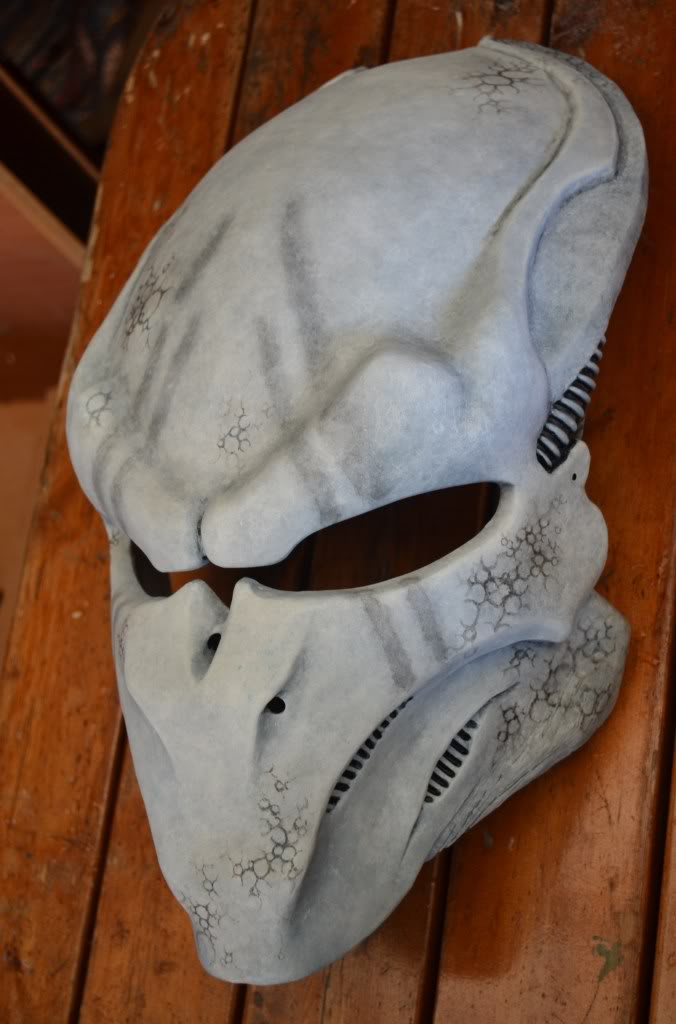 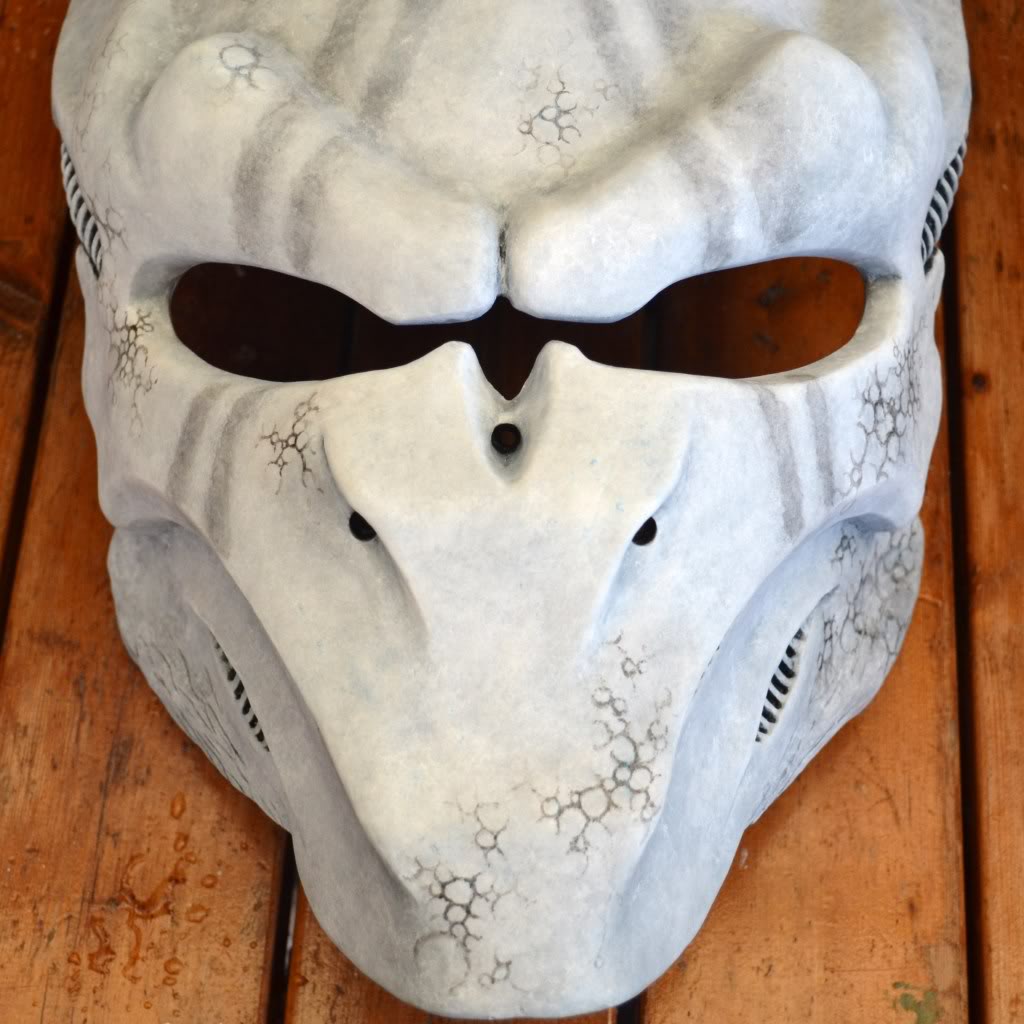 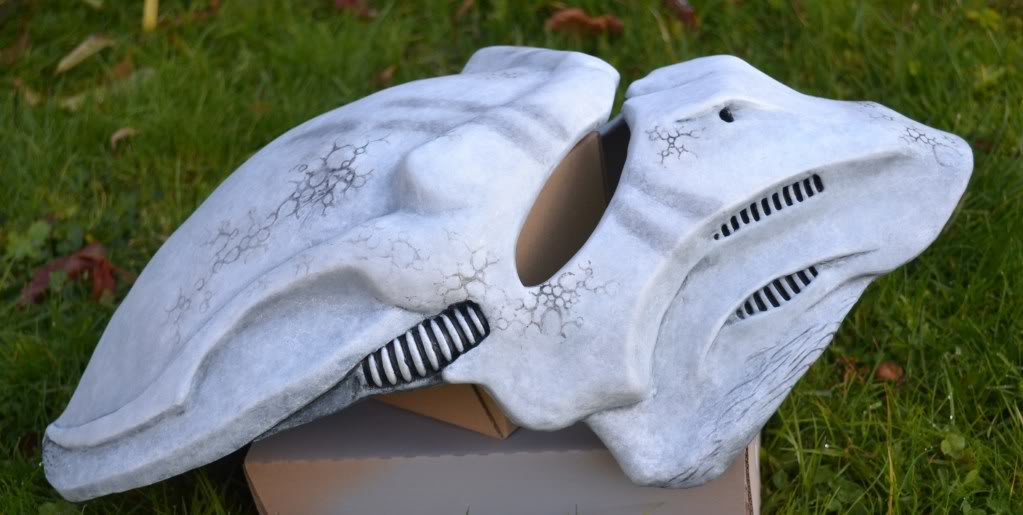 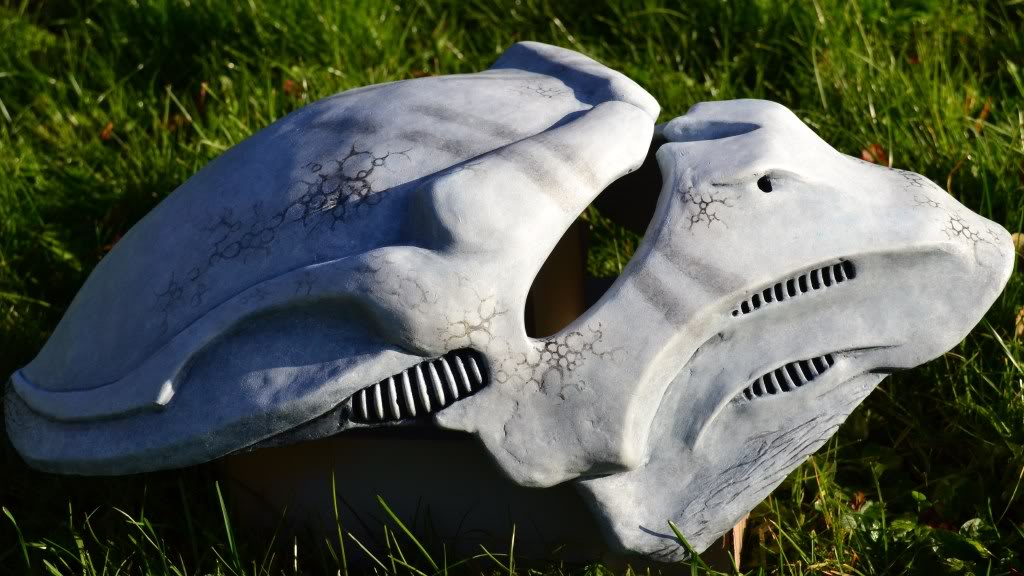 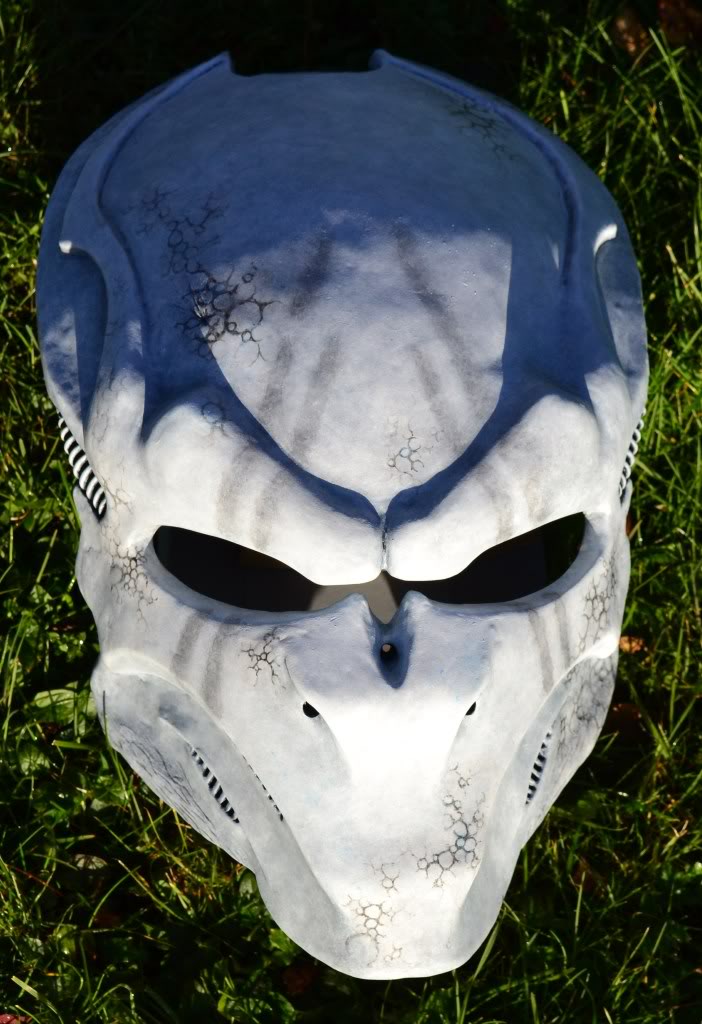 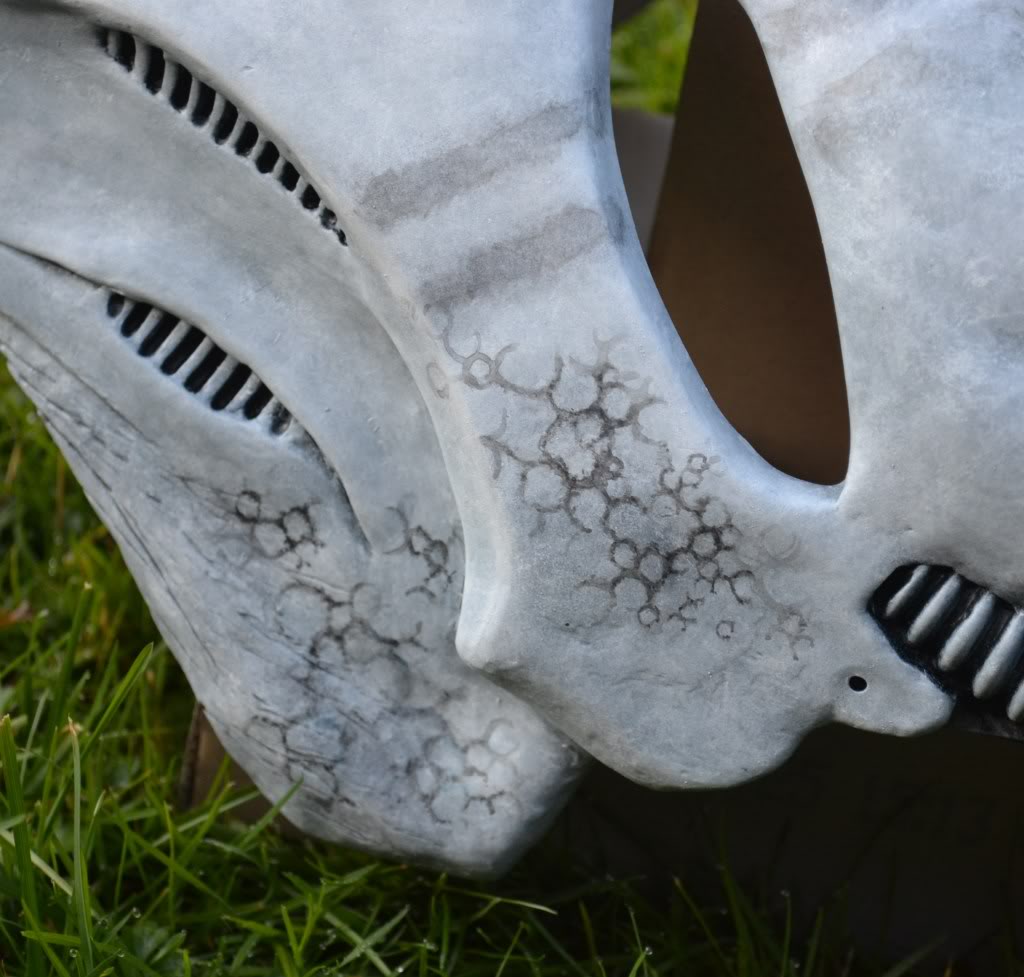 As I wrote earlier, still needs a protecting coat and lenses. Will update when it is completed.
Critic is welcome!

Looks great! the little circles realy work well, and the colors are perfect!

Its a bit different colourwise, but I like it so much, It fits the bio.

Niiiiiiice! I dig what you have got so far.

Really, really like the "spotting" you put on it. I think they give an almost 'amphibious' look to the bio.

Nice paint job, are u gonna use one of Damans half mask for ur bio?

holy crap! that turned out fantastic! Your spots are ten times better than mine.
Damn fine job Nicole! I have been really wanting to see someone paint it up and you knocked it out of the park!

Nicole - you did such a great job with everything from the cutting to the paint! You've pushed yourself to new limits and done a GREAT job! Your art is only but one version of your talent. Now you know you can paint a Bio too!

this is a really good piece, love the paint

Nicole my dear where do we begin... 1st you draw this stunning concept, Daman sculpts it and you now incredible paint it brings it to life. As an artist you;re getting stronger and better. Delighted you got the bio

Everyone, THANK YOU for the kind comments!
I think Im going to go with this paintup, there is one spot that I will have to add a bit more white too (but that is me being perfectionist) but other then that I dont see myself changing it much. Just add some lenses of plexiglas and spray it until winter comes.

Sonic7o7, yes! I will be using a Daman halfmask 1gen for the bio. I dont see myself getting it painted and done this year, but I will certanly aim for next year to get the halfmask done. Will order me some dreads when that comes up too.

Daman, your spotwork on your bio gave me the direction I needed to make mine. They were a great help, I didnt know where to start! I asume you made yours with a brush too? I kept looking at my drawing, thinking "how the hell will I make that?" and yours look great!
I say it so many times, but again, thanks for creating the bio. I love it!


It was so fun to work with this bio. I want to do another one, naow! I dont usually paint stuff like this... well, I havent painted alot lately, only drawn. Need to use my brushes more, they are collecting dust. It was refreshing to paint with colours, thats for sure.
And now for a question:
I have been thinking about magnets alot, I find some neodym/earth magnets in a store, but my concern is that they might be too small. They are only 1cm in diameter, and I've read I need at least 2 magnets on both bio and mask that is 2cm wide for it to hold on. Will it work with more magnets of 1cm size or will I have to search elsewhere?

well since it is going on the halfmask just get some velcro. it's easier since it doesnt have to align perfectly. and you can glue it right on top.


as for the spots, yes i used a brush. i watered down the paint to get the lighter parts and then went in with full paint to get the darker lines.
i didnt put that much thought into the shapes though. which is why yours look better.

I'm really digging this Bio; great concept Nicole, and Daman you knocked the sculpt out of the park.

The paintjob looks awesome! I think this is definitely one of my favorite Bios on the Lair.

Stunning bio indeed. Maybe its just me but I can sense some scandinavian aesthetics there, nice clean and pure lines on the bio and on the paintjob too

I don't know the history about the bio and how it compiled, but when i saw it, i started thinking maybe it was the skull of an extraterrestrial being, one of the predators preys, wich got it's cranium carved up, and they made a bio out of it.
Really cool though, cool as CoolleKotten.