RPF PREMIUM MEMBER
The original MPC Vader's TIE Fighter was one of the first kits I ever made - maybe the fourth or so. And I remember loving it, aside from the awkward fit, mainly because it was actually surprisingly accurate. Especially compared to the Falcon and X-wing kits. But I seem to remember the TIE fighter had raised panel lines. Anyone remember this?

I also remember reading a review of it saying how awesome it was, since it came with engraved panel lines. And being kind of astounded, since mine obviously didn't. Anybody out there who can confirm or deny this ancient memory?

Here's mine, dust, yellowed glue smudges, askew hatch, warts and all--somehow, it survived from when my Dad helped me build it back in ca. 1978-ish? Anyway, has engraved panel lines. 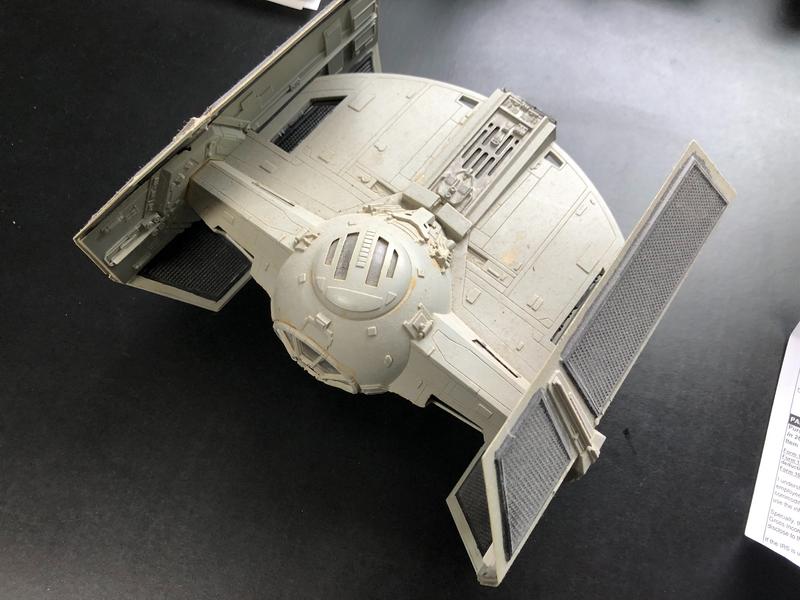 I have the kit, and it's engraved panel lines.

There were jointly produced kits for the European and UK markets that had raised lines.

If anyone has photos of the MPC's Xwing used in the movies.. I'D LOVE TO SEE THEM!!! PLEASE POST!!? I don't have them, but they do exist because I've seen them. Grainy photos of them sitting on a table in the ILM workroom, as I recall. Mike Todd

Here's a guy restoring an original MPC kit.....raised panel lines,....in this part he shows the revisions between versions

This should start at the time he compares:

Jaitea said:
Here's a guy restoring an original MPC kit.....raised panel lines,....in this part he shows the revisions between versions
Click to expand...

No raised panel lines on mine. I can;t be sure since I was only 8 or so, but I believe they are the original releases at least for the US as I got them within a year or so of seeing the move. I also had the MPC Falcon that had the battery pack and grain of wheat light bulbs. I played with them more than the Kenner toys since they were better looking

This is the box art of the kit ( I still have the box after all these years, although it is worse for wear) 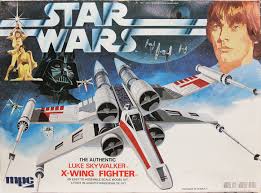 RPF PREMIUM MEMBER
Fascinating. My kit was bought in Canada. How bizarre that non US markets had crappier moulds provided/licensed to them! I’m also surprised since generally Canada gets the same stuff as the US, even back then.

Also missed that this topic had come up here before - I did a search and couldn’t find any discussion of this. Thanks for the link, robn1!

Yeah mine (U.S.) had recessed lines

Got mine here in the states back around 77 or 78. It has the recessed lines. I specifically remember it because of how much paint it took to paint all those little square holes!!
J

If only they coulda done the falcon with decent accuracy back then... Most of my modeling hobby life would be drastically different.

RPF PREMIUM MEMBER
It's easier to tool a mold for a final product with raised lines, because you just engrave a groove....instead of milling out everything AROUND the line. (Saves on wasted material, too.) So the factory for the other release was taking a shortcut.

Jedi Dade said:
If only they coulda done the falcon with decent accuracy back then... Most of my modeling hobby life would be drastically different.

Compared to anything Kenner put out, the MPC Falcon was a masterpiece

You could swivel the radar dish, you could raise and lower the ramp. you got a "lighting kit" with it. AS an 8 to 9 year old at the time, it was amazing

As an adult, it shows it's age and lack of details compared with the Bandai and Fine Molds kits, and even the smaller Revell, (not the larger one with even bugger sidewalls than the MPC)
J

You and I are of similar vintage... and I remember being that little kit and being so disappointed at the lack of details... It just didn't look like the box art , and even as a wee one it bugged me. and sent me on a quest to "fix it"... that led me into this crazy studio scale model building. without that kit I would not have learned to kitbash and scratch build. not sure if that's a blessing or a curse on some days...

Jedi Dade said:
You and I are of similar vintage... and I remember being that little kit and being so disappointed at the lack of details... It just didn't look like the box art , and even as a wee one it bugged me. and sent me on a quest to "fix it"... that led me into this crazy studio scale model building. without that kit I would not have learned to kitbash and scratch build. not sure if that's a blessing or a curse on some days...

I had been building models with my Grandfather for as long as I could remember so I was pretty numb to the whole thing where the box looks much better than the model. Plus compared to the wildly out of proportion simplified lumps of plastic that were the toys at the time, it was pretty good

I did embrace the challenge and enjoyed seeing the potential of those kits, but thank god for Bandai. It is very rare I feel the need to do anything to their kits beyond assemble and paint them. It's also cheaper on the wallet since I don't feel the urge to buy all the upgrade sets either

Meanwhile, a moment of silence for all those kits I started slicing, detailing, scratch building parts for, but have run out of steam because they need so much work

Sorry for the late reply, but my Canadian 1978 MPC X-Wing has not only raised panel lines, but different details here and there (mainly some greeblies on the wings and the upper hull behind R2D2). Also the rear end plate (the Sherman tank) is quite different.

I also got huge missalignments, flashing and some bad castings, but it's a 40something years old kit so who knows to what extent that's on the manufacturing process or maybe the plastic warped a little and went super-stiff and that's why I end up in tears every time I put a couple of hours of my time on it.

I built the ERTL kit like 5 years ago and it was much easier to build. I don't remember it being such a pain in the ass. Even the color of the plastic was different from the white or almost white american MPCs (recessed panel lines) I've seen on the internet. I remember the ERTL being neutral gray, but I'm not sure, I could be wrong.

So did ERTL revise the model or the Canadian version really is worse than the original? (lesser quality and some different details). Or a bit of both?

edit: just got a response on facebook: ERTL never changed the design (maybe just revised the quality though, or maybe the Canadian/international version of the MPC is just worse).
Last edited: May 3, 2020

RPF PREMIUM MEMBER
So it's looking to me like the Canadian factory was supplied with moulds that did not have the more expensive engraved panel lines, but the cheaper to make raised lines. And it sounds like the kits imported into Europe were the Canadian-made ones.

Here are some interesting links on the subject:

Just curious to know if anyone has taken the time to research or catalogue the MPC kits produced in Ontario in the late 70s/early 80s by Parker under licence from cpg/fundimensions. Ive seen the camaro and I think the little red express kits.
www.modelcarsmag.com

The Star Wars Phenomenon in Britain

Among the top-grossing Hollywood blockbusters of all time, Star Wars launched one of the most successful movie and licensing franchises in history. Yet much of the film's backstory was set in Britain, where the original trilogy was made and where early efforts at tie-in merchandising were...
books.google.co.uk

RPF PREMIUM MEMBER
I was relatively happy with my Darth Vader TIE Fighter kit when I got it as a kid in 1979 or 1980, despite the obligatory problems with gluing all the bits together. Lots of seams and whatnot.

I ended up dismantling it and redoing it, though. I added fibre optic lights to the cockpit, brass tubes with LEDs for the cannons, and even a small loudspeaker through which I could play pew! pew! laser sounds. I entered it in a contest in a local hobby shop, where I didn't win because SF models were in the military model category, and all the elaborate models made by adults won.

Then I got this book (well - the US original printing of it), and was completely puzzled by how the reviewer singled out the more expensive recessed panel lines as being a feature of the kit, when I didn't have them!

Decades later I think I have a little insight as to the discrepancy. 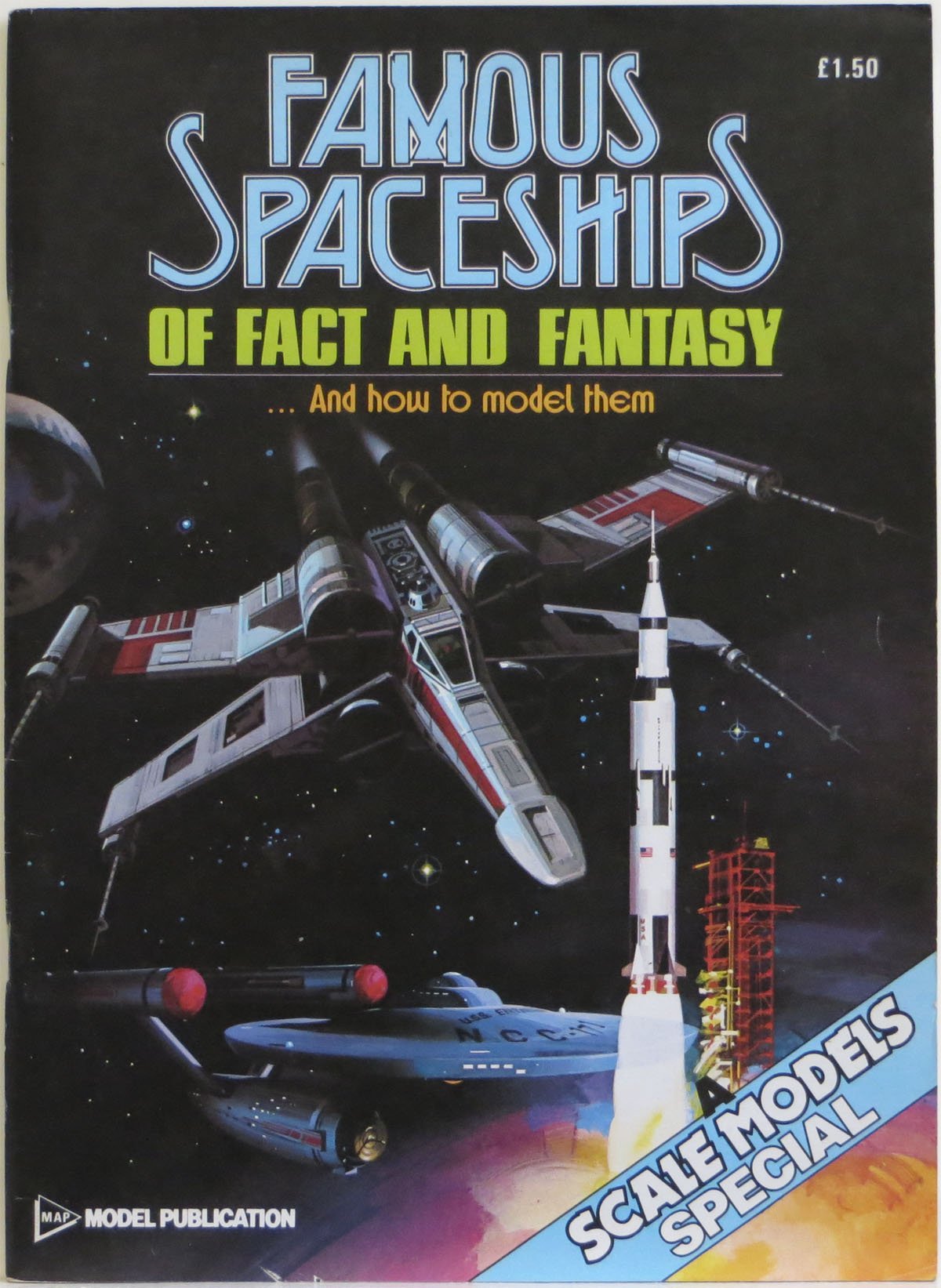