I've wanted a Scorpion costume for a long time, and now I finally have one. 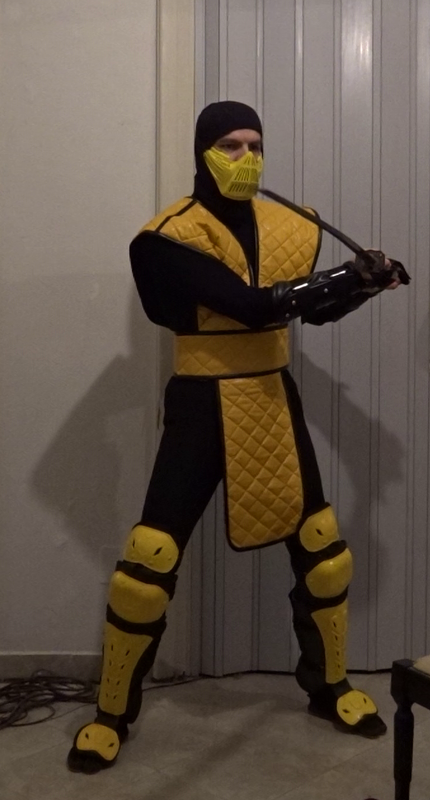 I investigated the pros and cons of buying a premade costume (extreme accuracy, high cost) and making it myself (inaccurate, but cheaper), so, in the end, I compromised with a hybrid approach.

The most important part, for which I would not accept any kind of compromise, was the yellow tabard. That, and the wrist bracers for which I could not find a suitable substitute, I got custom made from ShopCosplayCostume, on Etsy. They are absolutely amazing.

For the rest, I did the same thing Midway did when they were making MK2: I repurposed various pieces of sports equipment.
The rest of the costume consists of a pair of cotton thermal long johns and a high-neck thin polyester sweater, which I bought at a local store.
The sword is a 440 stainless steel wallhanger I won at a carnival in 2006. It looks cool, but I suspect that if I tried to use it to chop a watermelon, the watermelon would win and a piece of blade would fly into my neck, so back on the wall it goes.

Today at 9:33 AM
Mechanismo