Some time ago I found a nice finished and painted monogram Battlestar Galactica, with 3 additional fleet ships, on ebay ... at least that's what I thought. Alas on arrival I noticed that a very thick layer of several coatings of paint covered the modelkit so much so that a lot of the finer details were completely lost : 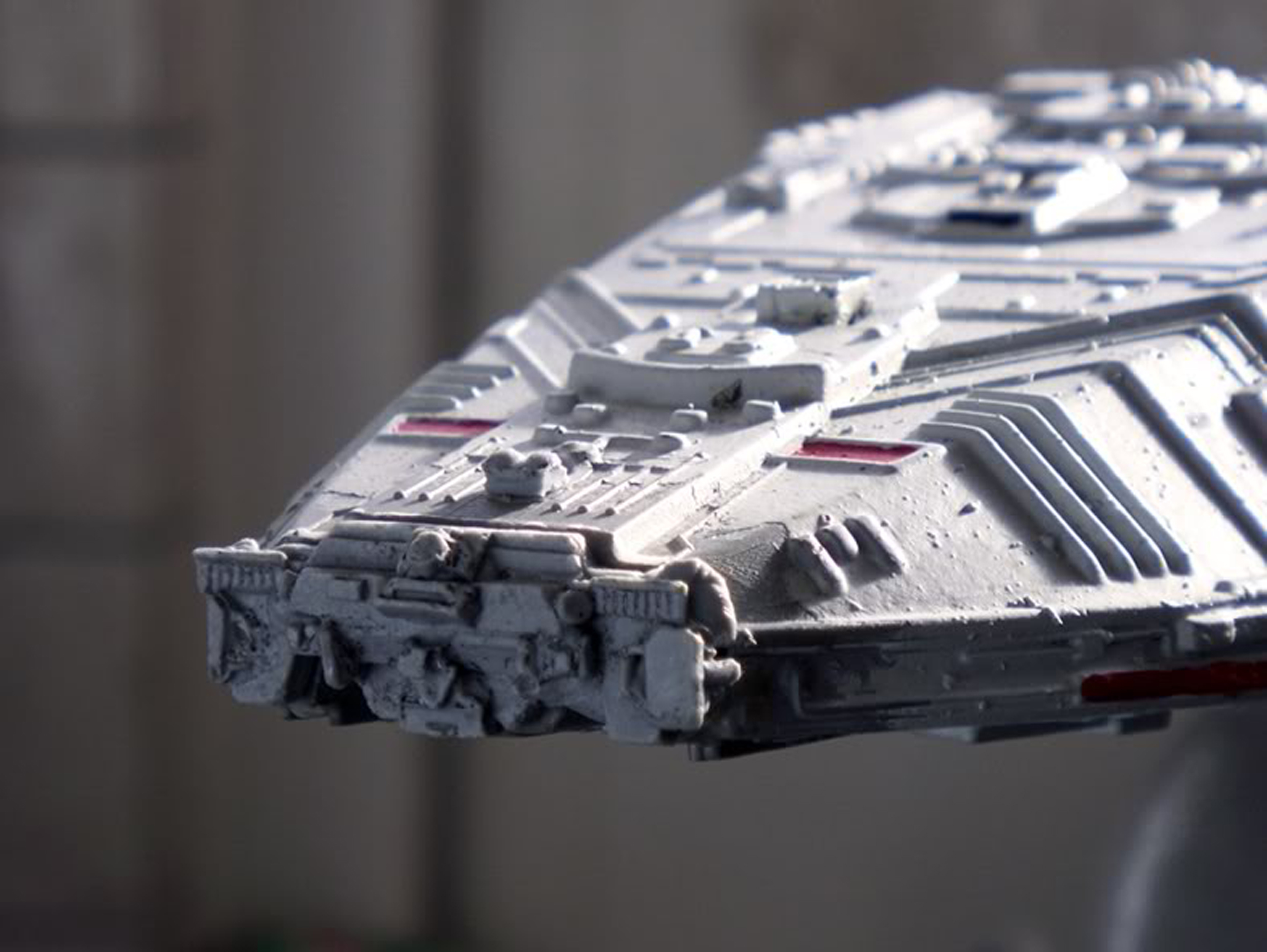 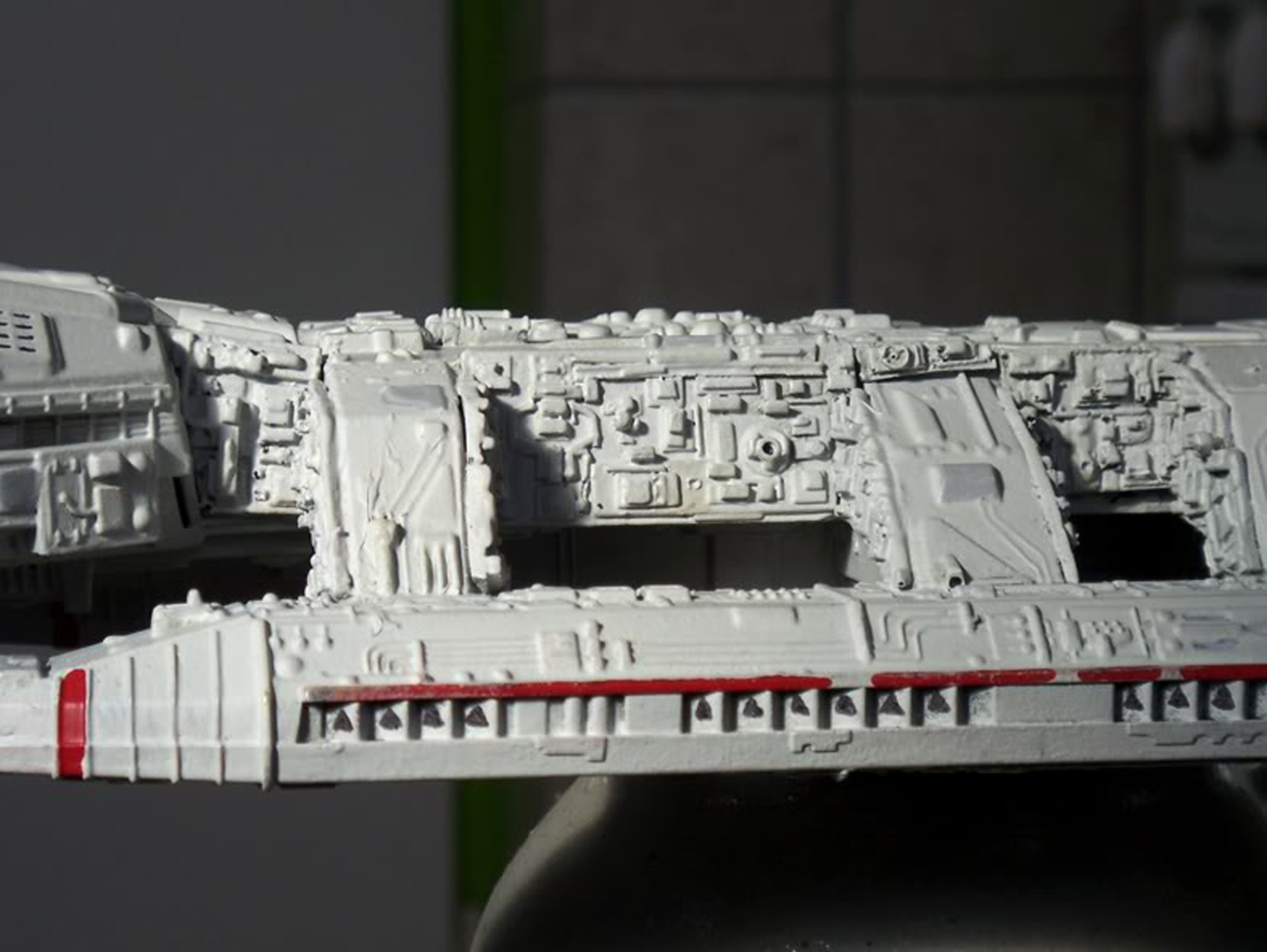 So I immediately decided to strip the thick layers of paint with some 'graffity remover' and a toothbrush ... here's the first result as seen on the engine section : 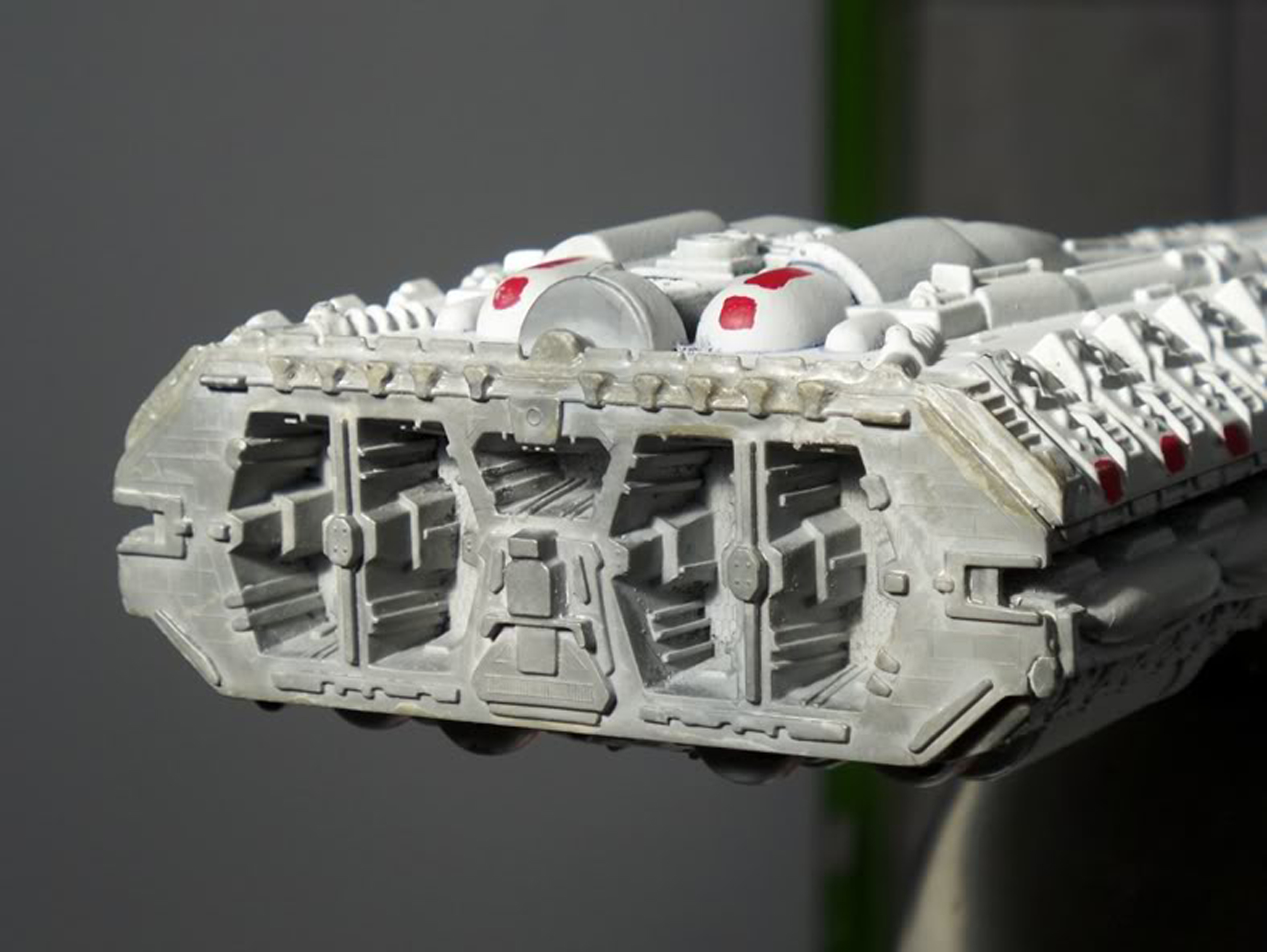 As always other stuff became more important so I put this project on the back-burner for quite some time. This summer was a good time to revisit this modelkit. I completey removed the old paint layers and added some additional styrene parts and greeblies to camouflage the crappy assembly of the kit by the previous owner. There's a lot of minute details on this modelkit to enjoy. I'm a bit hesitant to repaint this modelkit again, since I like the weathered look after my cleaning and upgrading. This afternoon I took the time to shoot some pictures and I will add paint on the greeblies and white styrene parts lateron. Here's the project done sofar : 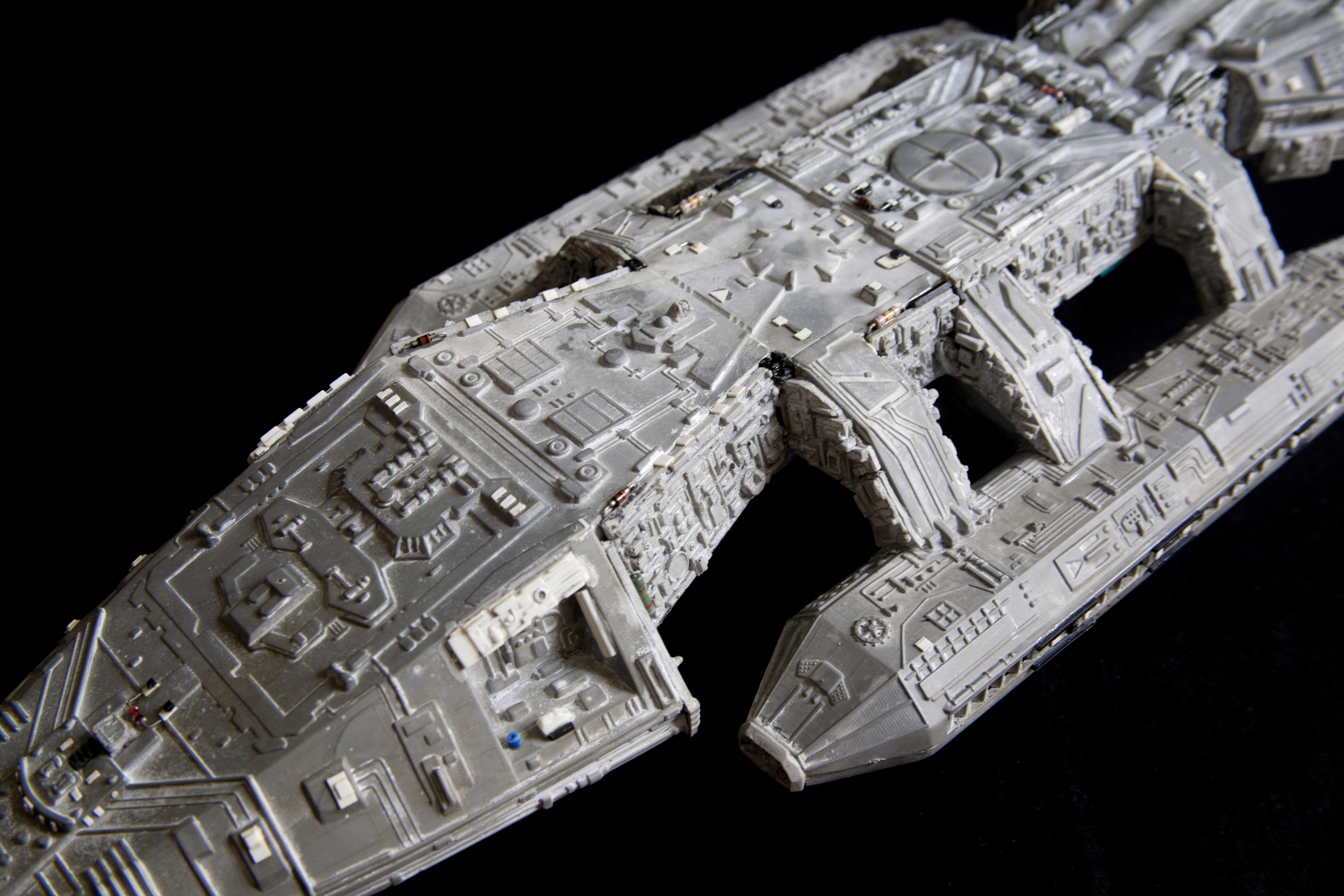 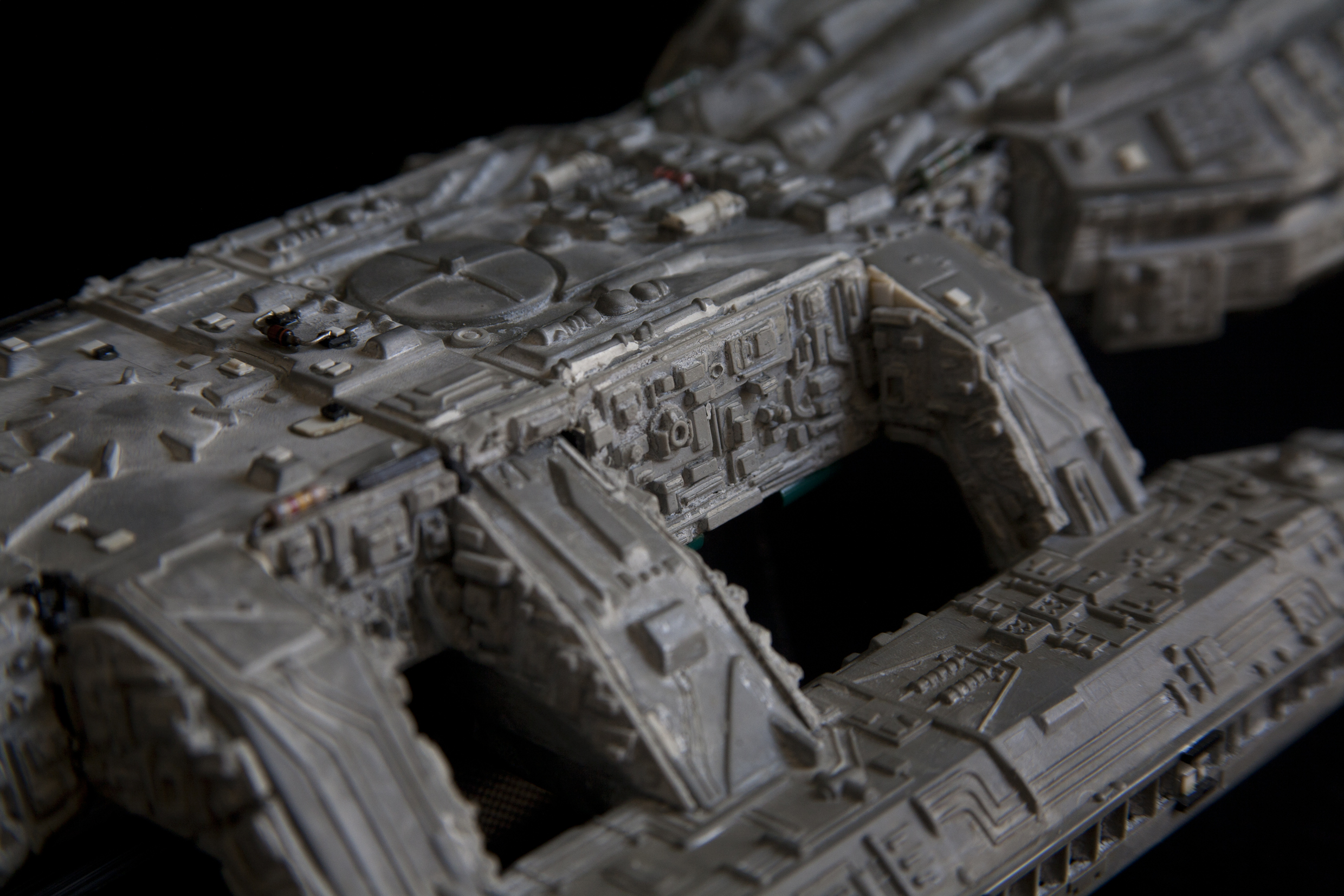 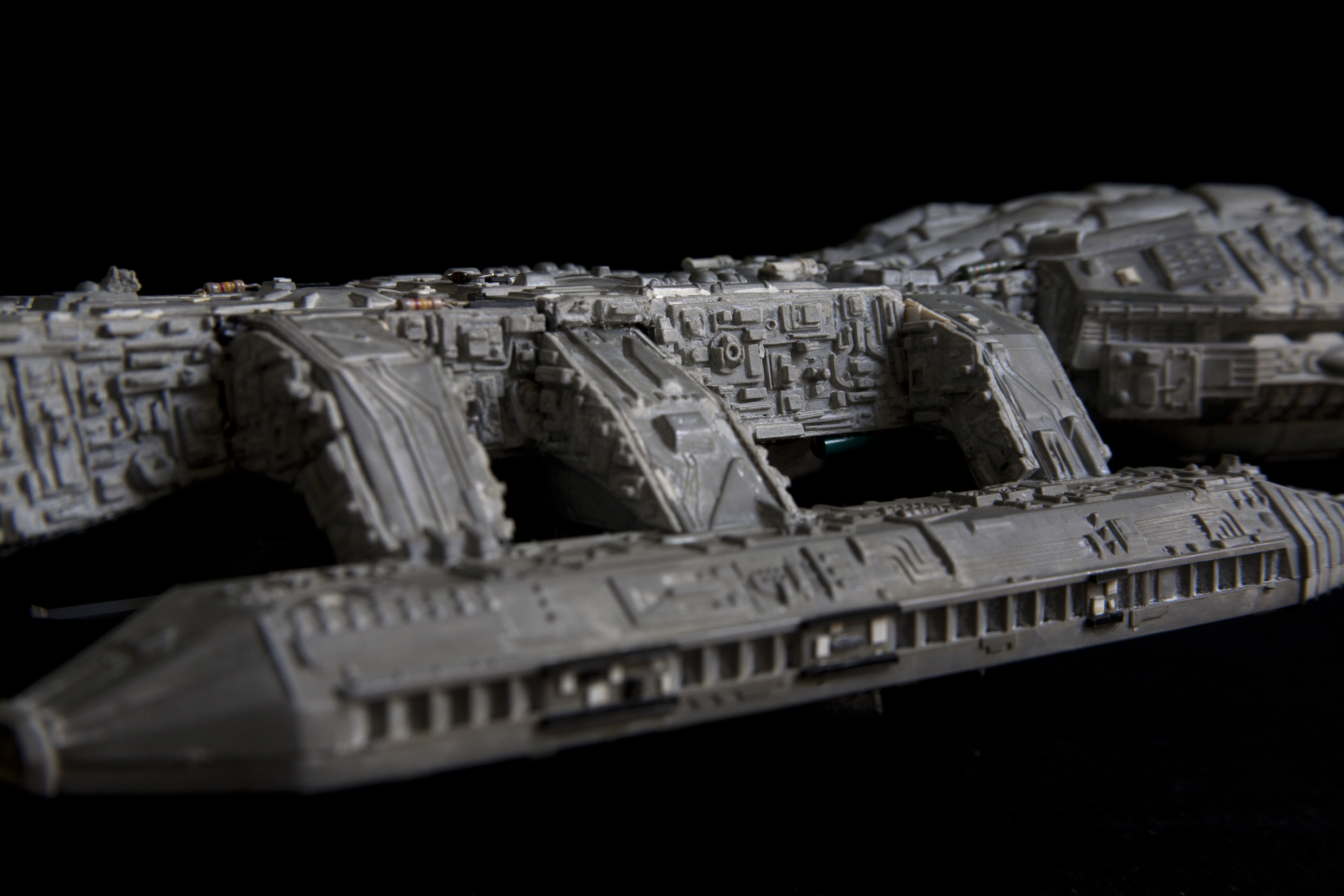 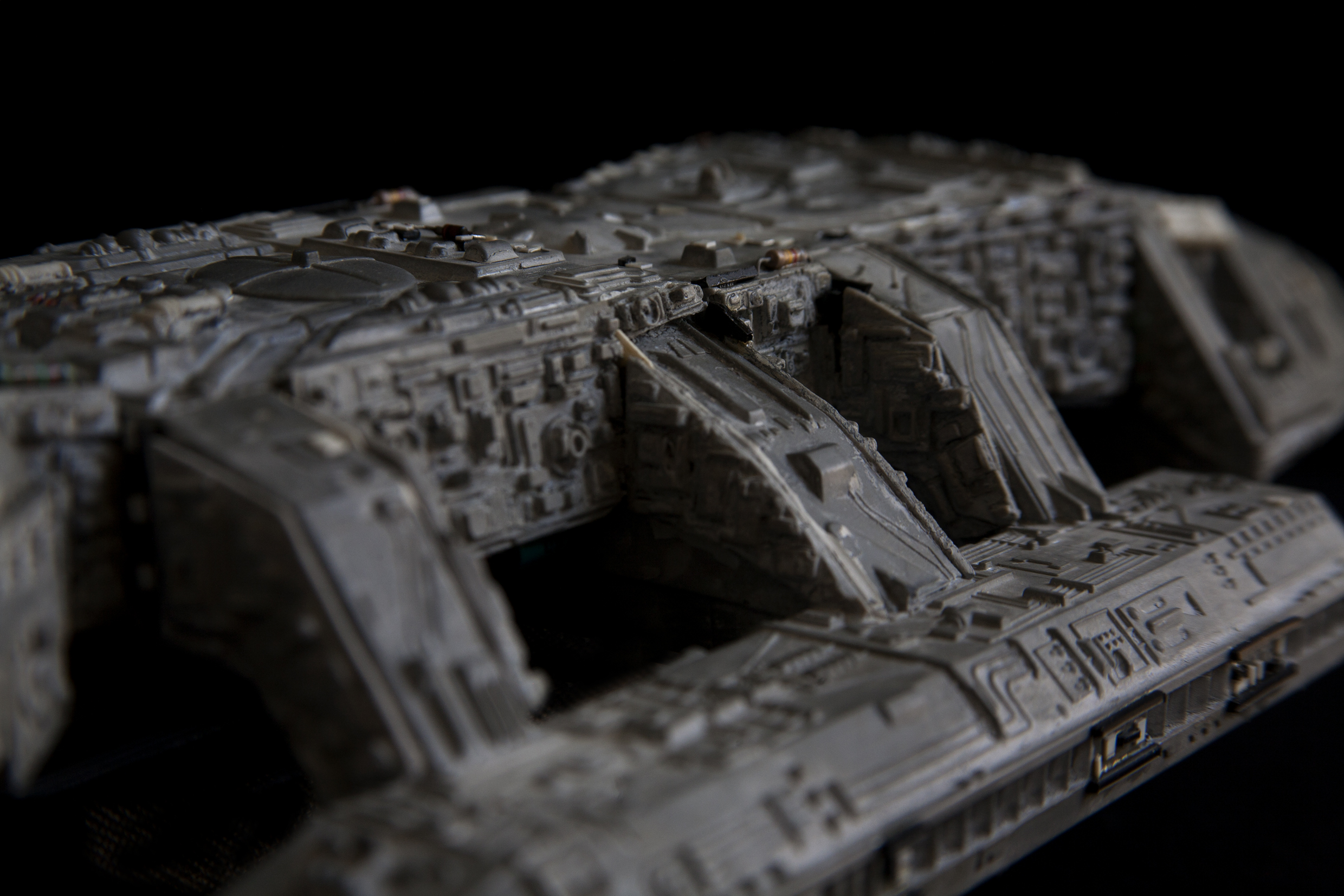 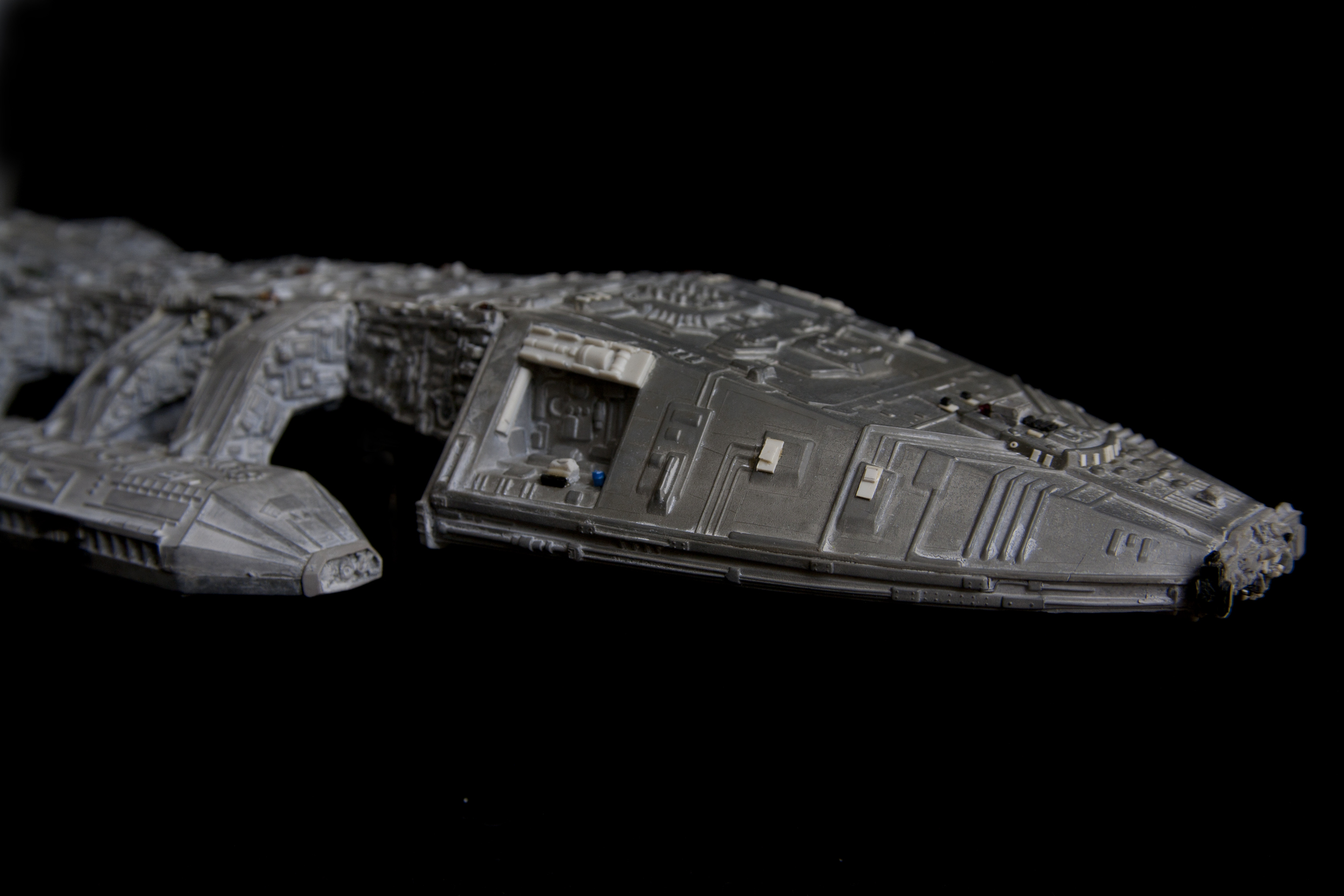 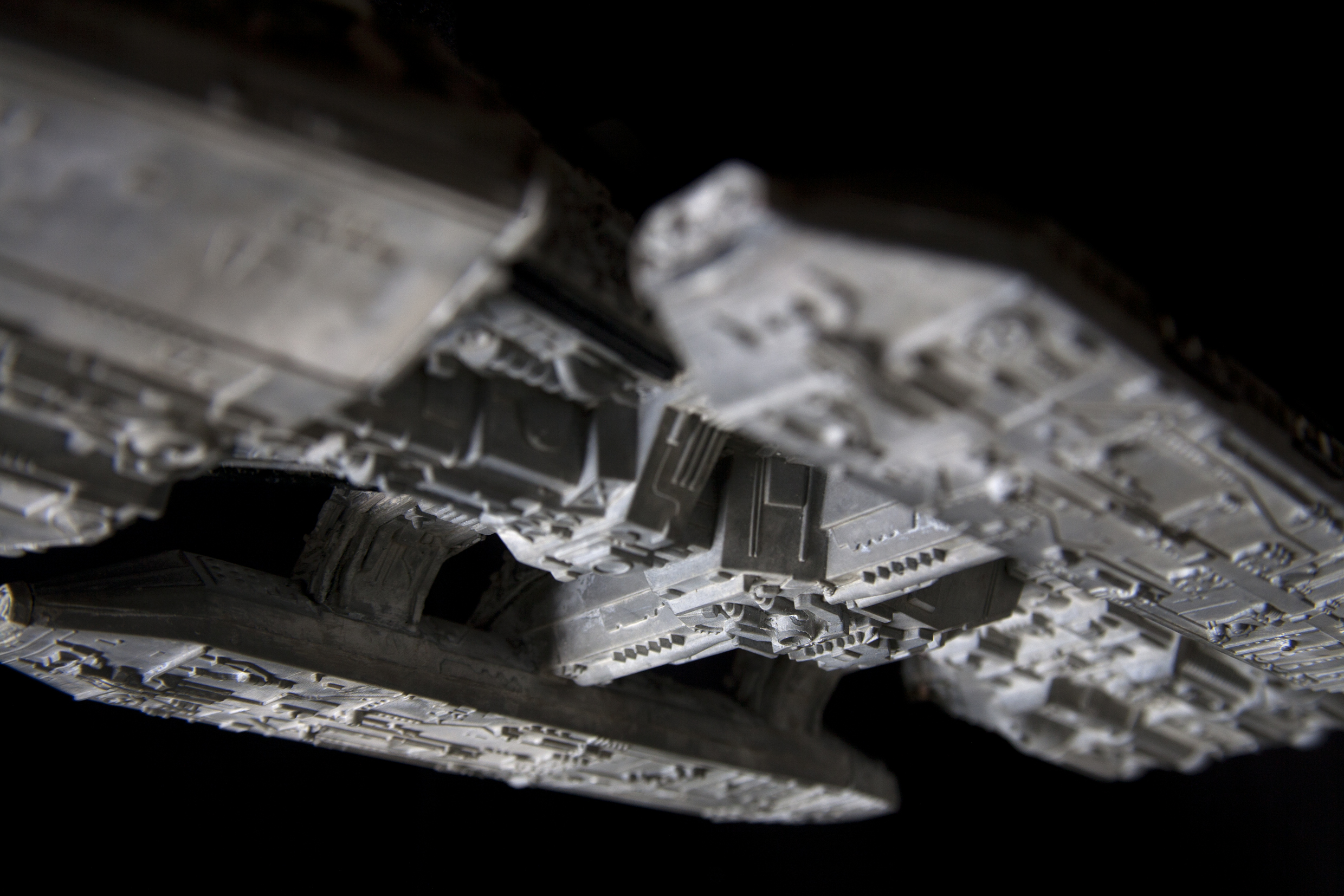 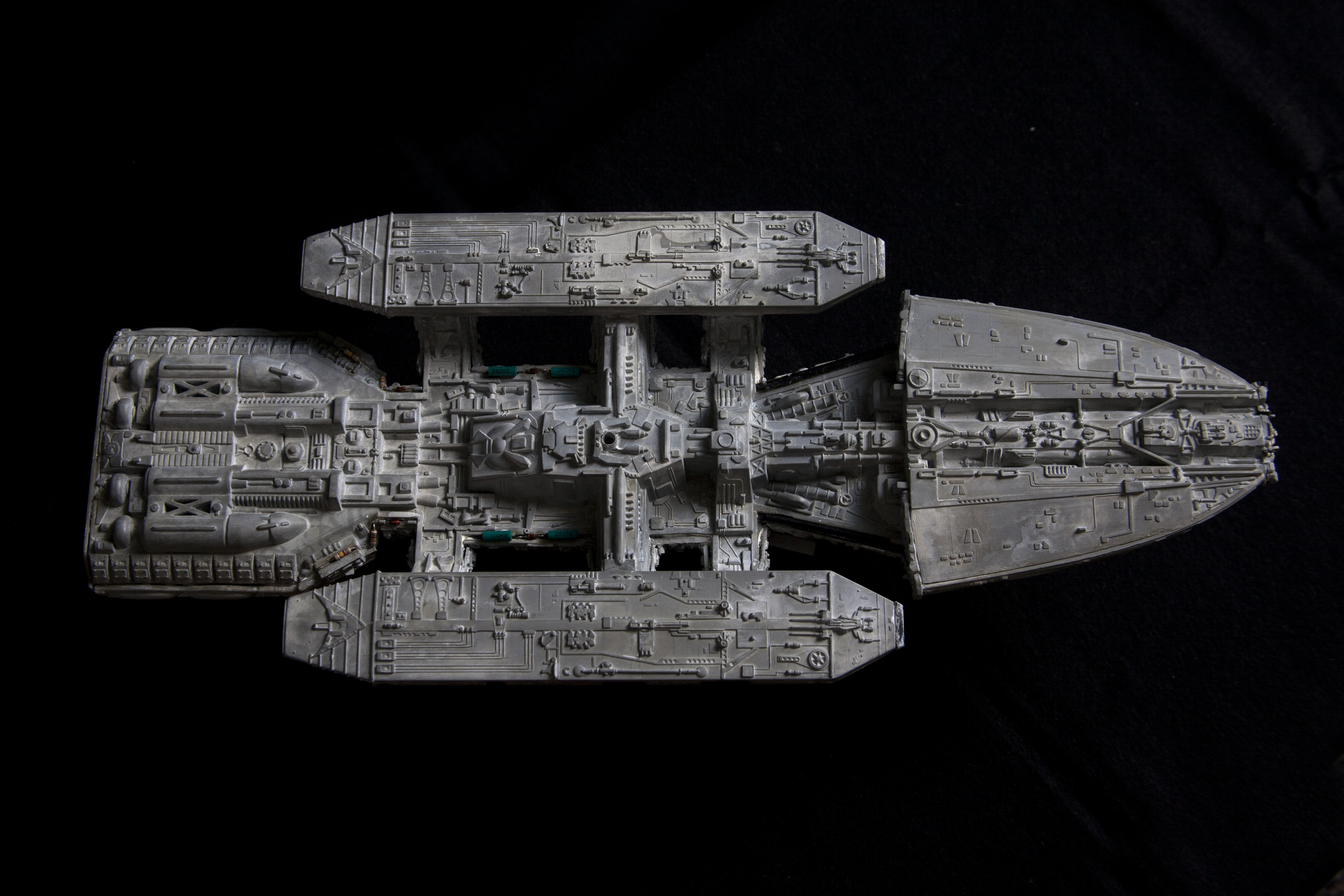 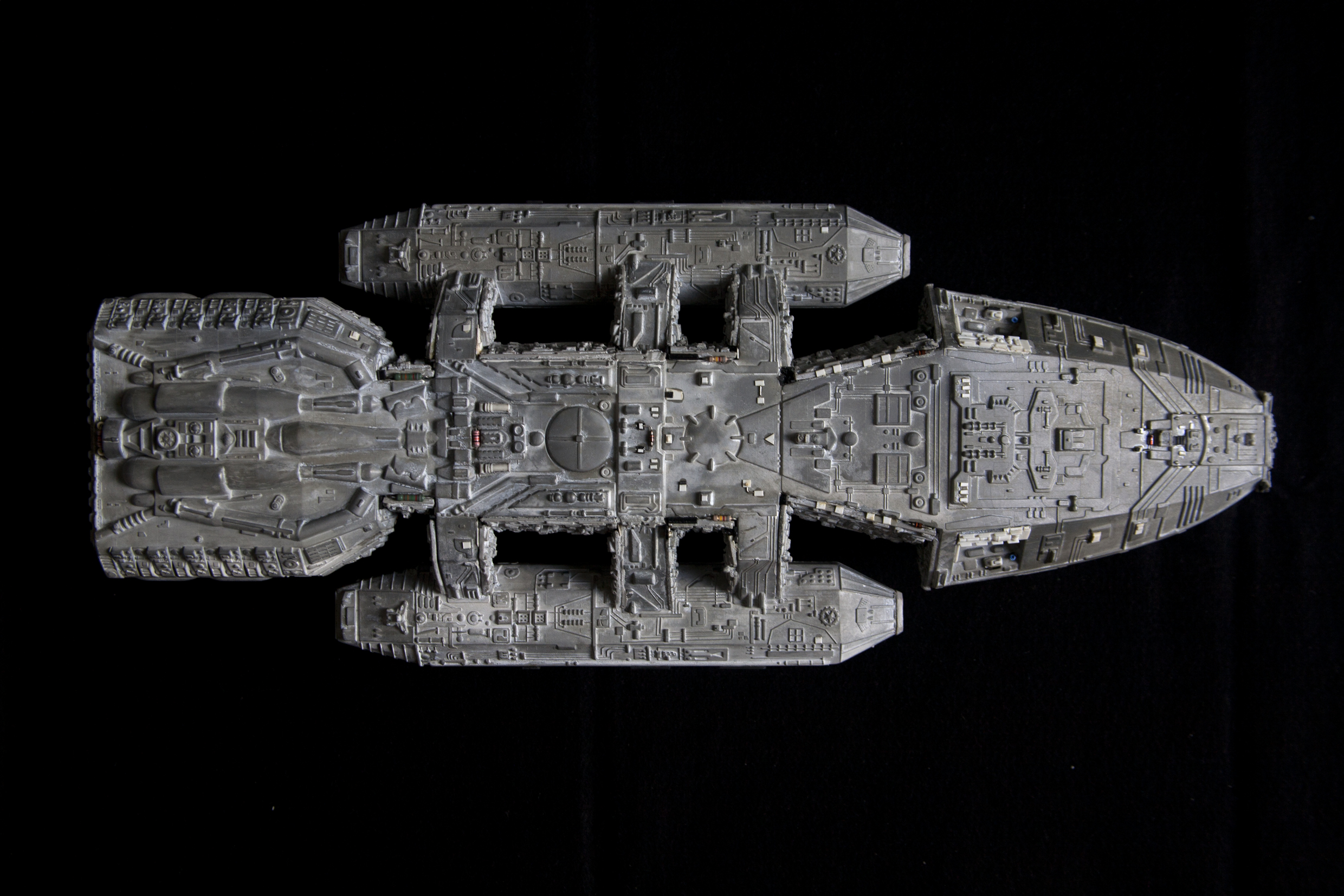 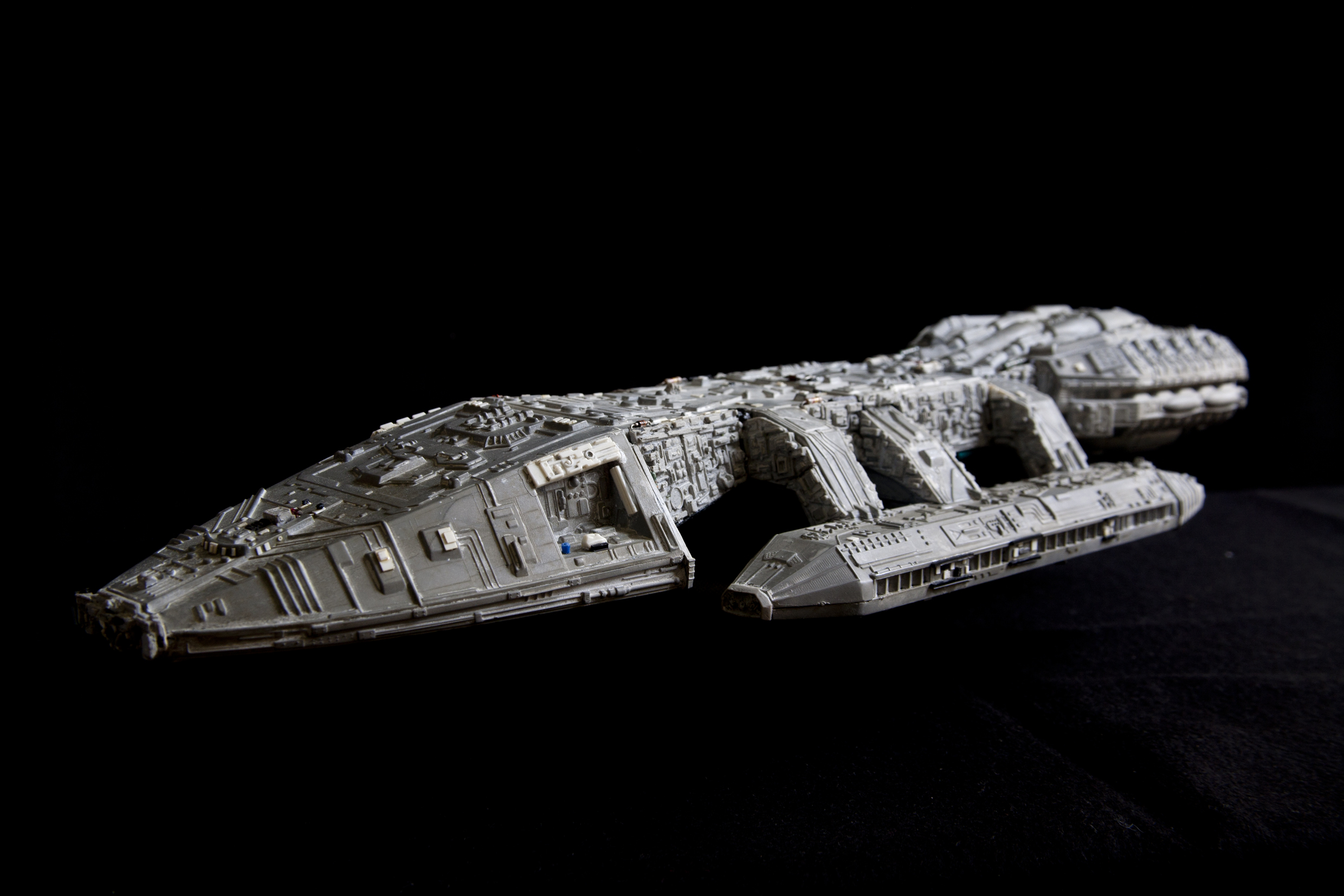 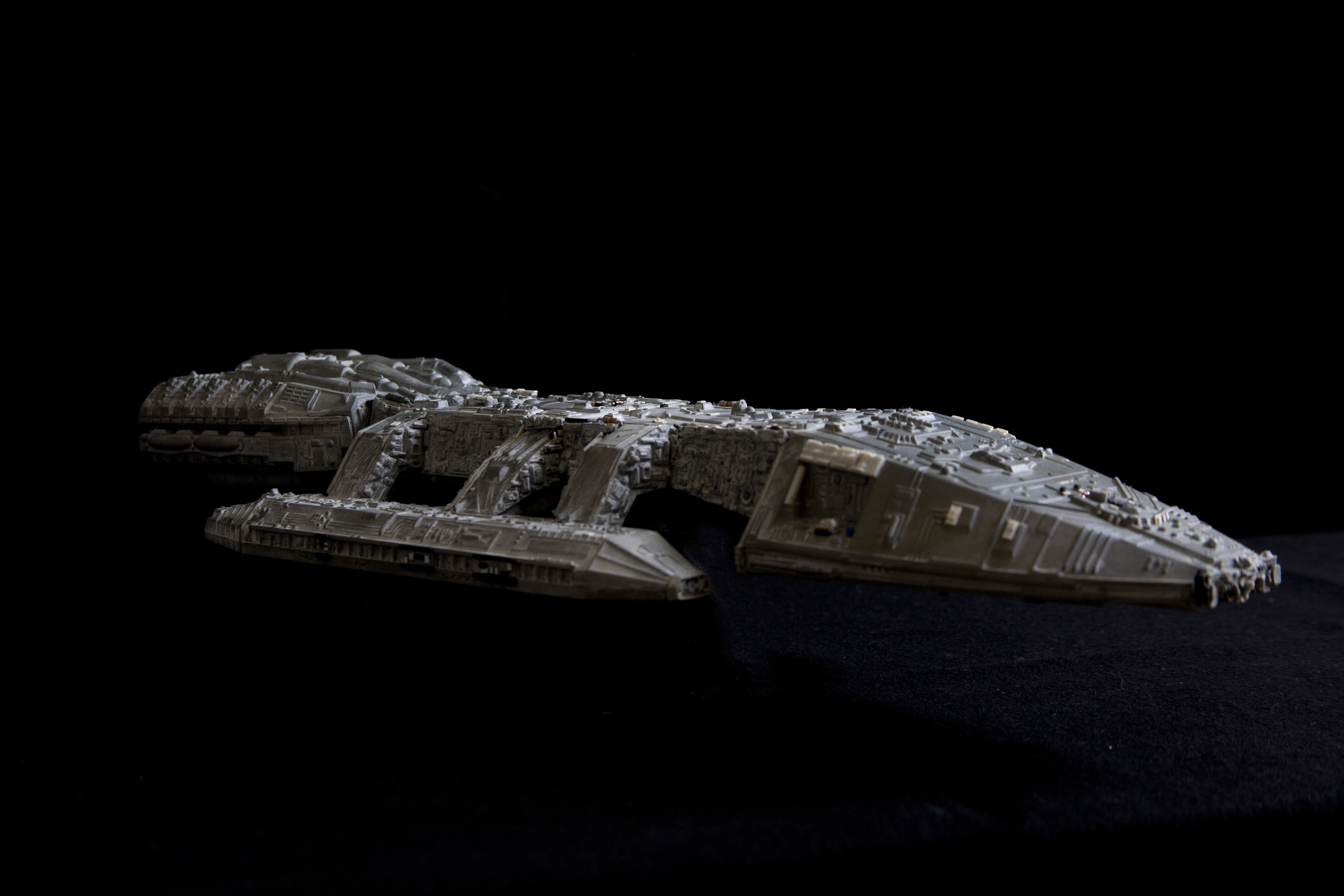 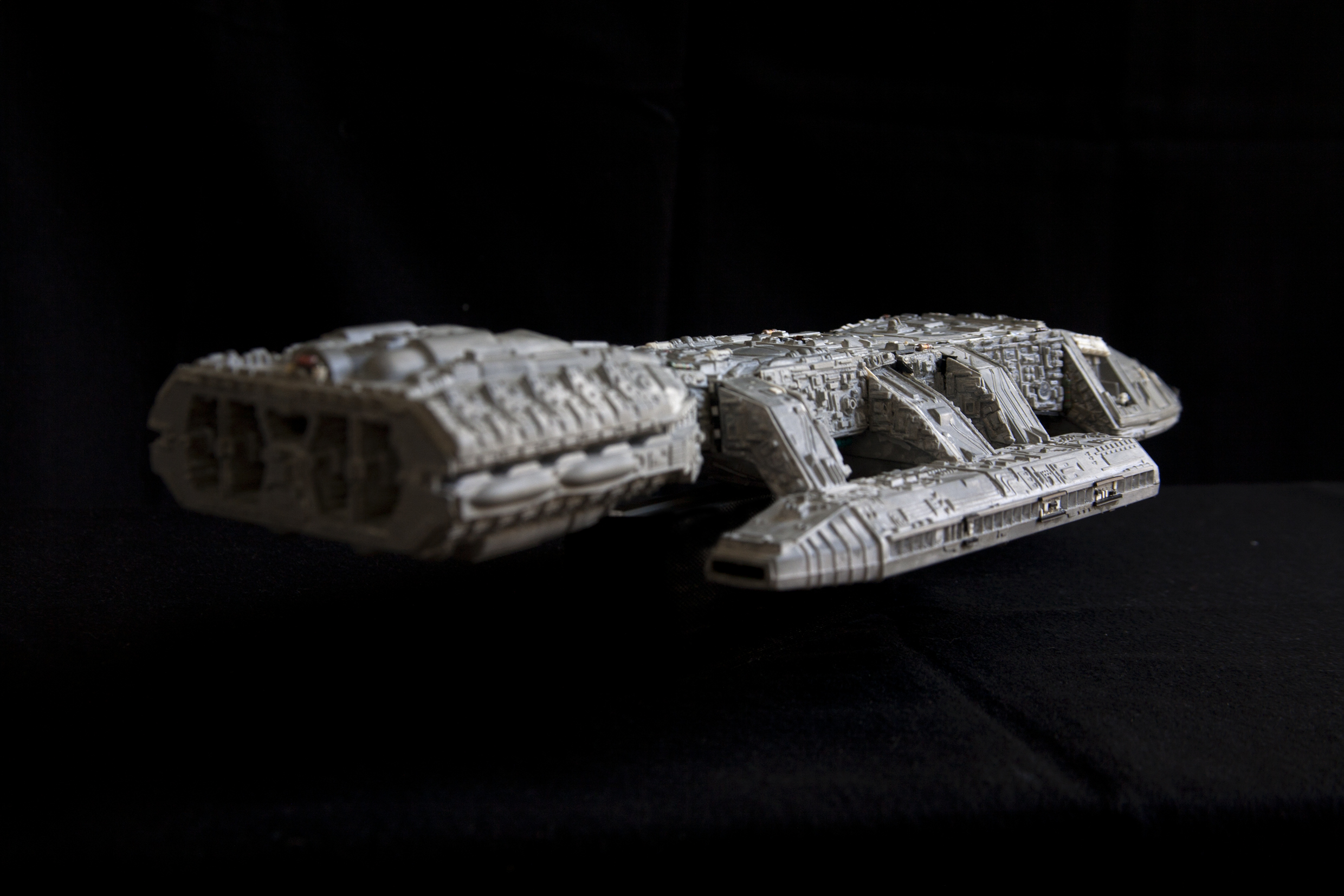 And a behind the scenes shot of the above pictures made in my kitchen with a simple black cloth and lit by indirect sunlight through the open outdoor : 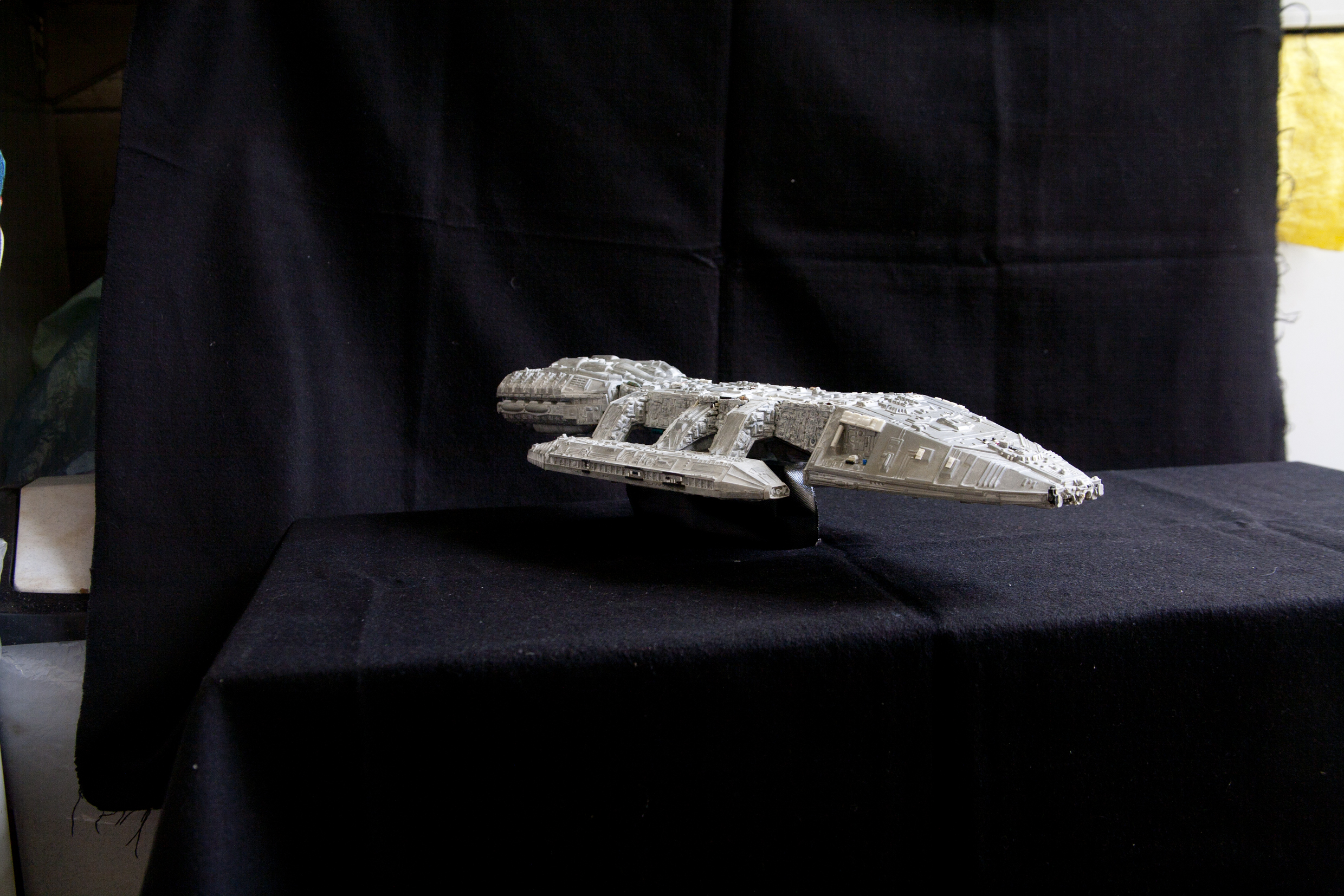 Eventhough the Monogram modelkit of the Battlestar Galactica may not be as screen-accurate as it could be ... it does have quite a lot of potential especially after restoring and upgrading : 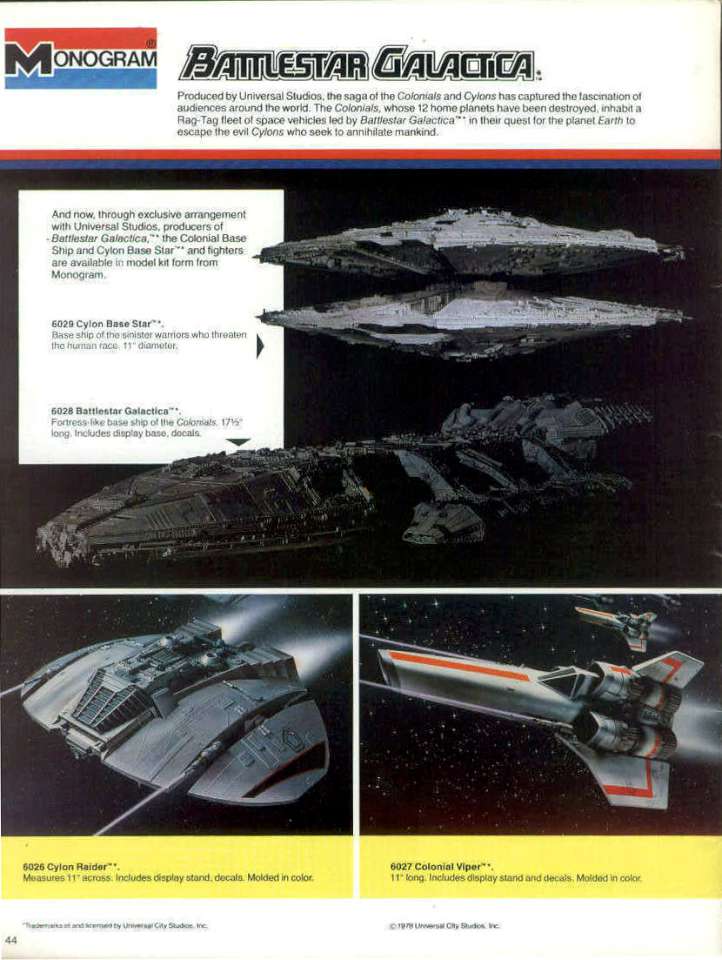 There's another Galactica modelkit available which is more accurate in the same scale : 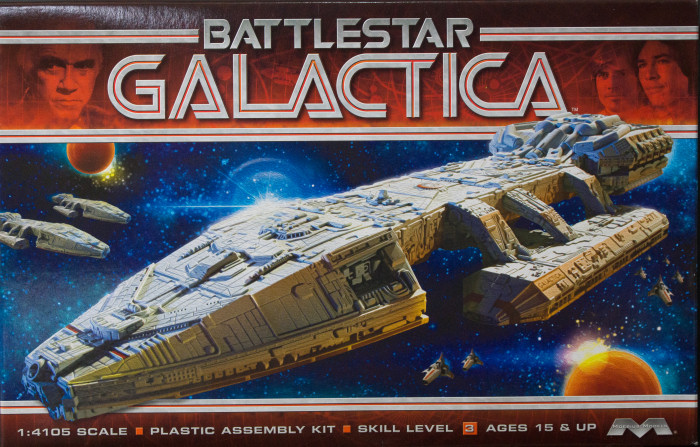 Dang... did they paint that thing with a paint roller?

I used to have that model when I was kid. Sadly, it was lost in one of many, many moves. One of these days I need to pick up the new Moebius kit...

I'm looking forward to seeing what you did with this old gal.

Nice work! Always wanted to build a Cylon Basestar too.

Thanks Zuiun ... yeah it was a horrible paintjob, however I really like the weathered look after cleaning it, instead of repainting it and loose all that nice detail, as if my Battlestar Galactica has really been on a long journey in search for the thirteen colony.

SwedishChef ... thanks, yeah I too would have liked to own a Cylon Basestar, however the existing modelkits are really not screen-accurate and need a lot more work to alter.

Sym-Cha said:
There's another Galactica modelkit available which is more accurate in the same scale :
Click to expand...

Yes, I know. I'm looking for one. If somebody has a lead or one for sale, please let me know!

As some of you may have noticed this Monogram modelkit came already with extra parts attached, made available
at the time by SMT with their Colonial Battlestar Detail set : 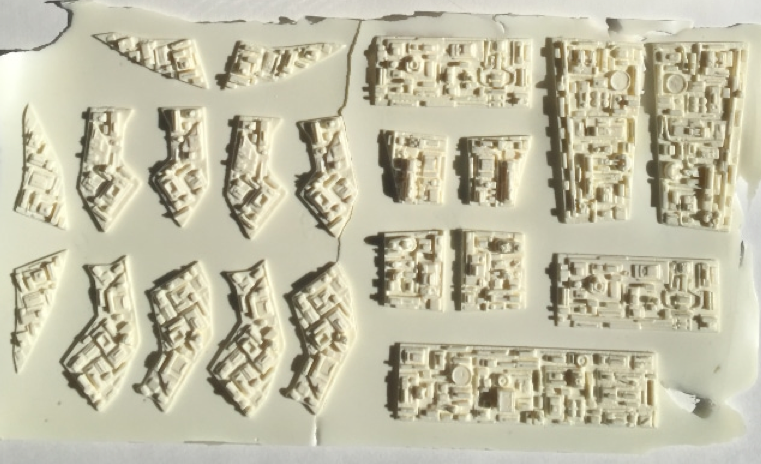 As you can clearly see it adds lots of extra greeblies inbetween, where on the original monogram there were none : 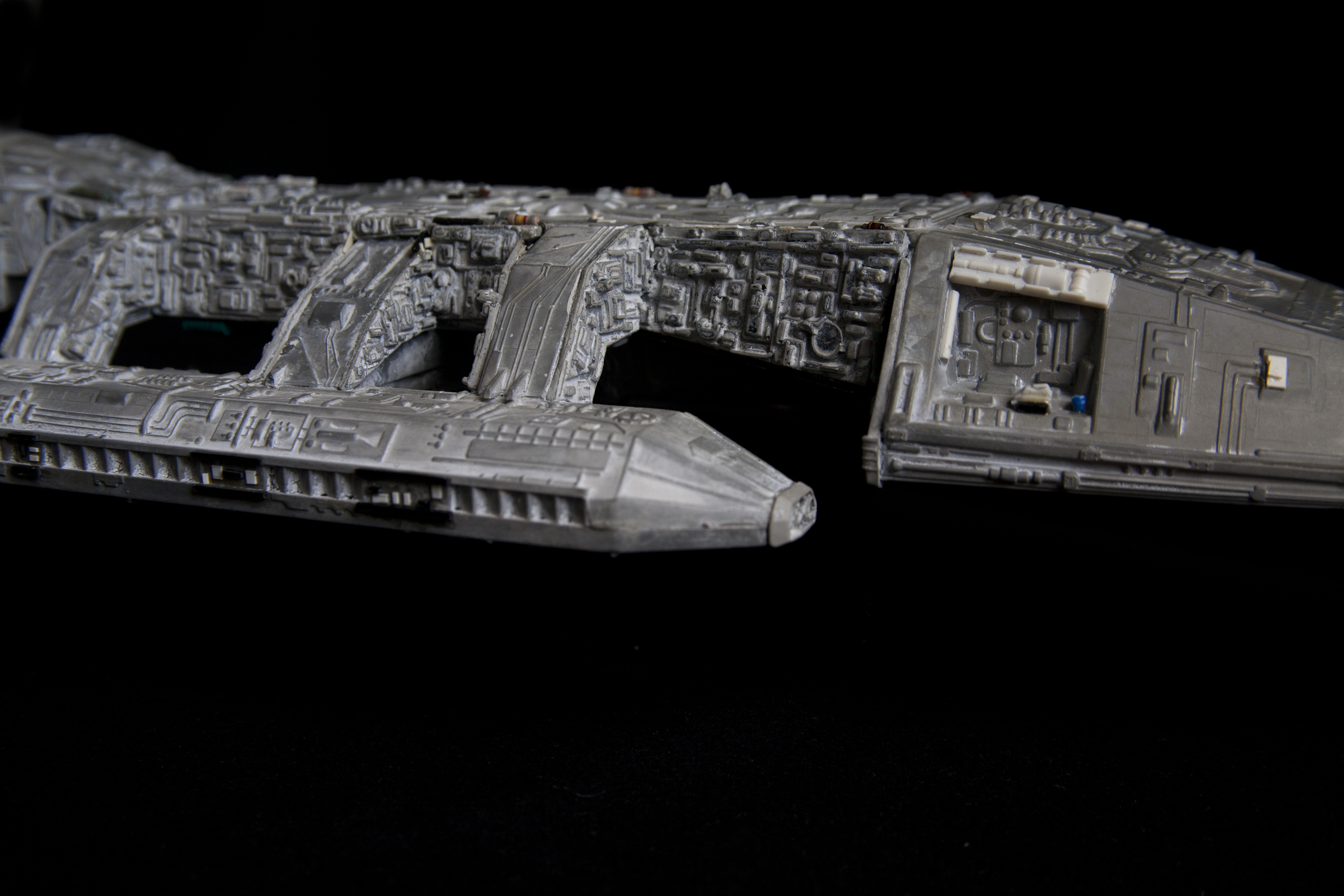 Sym-Cha said:
As some of you may have noticed this Monogram modelkit came already with extra parts attached, made available
at the time by SMT with their Colonial Battlestar Detail set :

As you can clearly see it adds lots of extra greeblies inbetween, where on the original monogram there were none :

Damn, Nice work. I built this as a kid back in the 70's when it first came out (along with the Viper, Cylon fighter and Basestar). They sure as hell didn't have that detail kit then or I'd have been all over it.

Thanks Craqigbob ... do you still have any of those kits?

I've been a bit distracted with other unfinished long term projects however I shall return to this modelkit shortly.

I wish I had them. they were built back when they first came out in the 70s and 80s and many moves over the past 40+ years have caused them to go bye-bye.

I just have a 1/2 built B5 Star fury sitting in my garage waiting for me to finish it (It's been waiting for 20+ years).

Well Craqigbob there's no time like the present time to start finishing projects hence I started work on this Battlestar Galactica now ... and by creating a work in progress thread with pictures you'll get some encouraging feedback and will finish your modelkit long before you're able to recite Mary Poppins' 'Supercalifragilisticexpialidocious'-song by heart

Moebius Battlestar Galactica. The old one!
8 9 10