I purchased this Revell kit for a steal. It’s a decent size and a good starting point for a good-looking, if not entirely accurate, Star Destroyer. The base is a solid rectangle of wood with layers of carved foam on top painted to represent the planet Sullust (as seen in the Battlefront games). The lava is strips of aluminum foil with globs of white glue dyed red with food coloring, so when the light hits it there's some reflectivity, giving it that lava-like glow. The smaller Star Destroyer is the little Bandai kit (tons of detail for such a small thing!) and shows the scale of the Revell.
Out of the box, the Revell kit is just, ugh. There are landing legs (seriously??!) as a stand, and a just awful audio system (why, just why). The huge holes in the ship where the landing gear is located needed to be patched, covered, filled, you name it. Like I said, this kit is still actually a really good starting point if you don’t want to break down and get the new larger Bandai kit. Detail was decent but I scribed tons of lines into the surface with a pin in a little vice. Many tiny pieces of styrene were added, a few tiny laser cannons scratchbuilt, made the tiny pylon supports for the radar globes, drilled a few holes, and lit it up with blue and white LEDs. I really enjoyed painting this thing to make it look to scale, and maybe a little unique. Star Wars is still fiction, right? 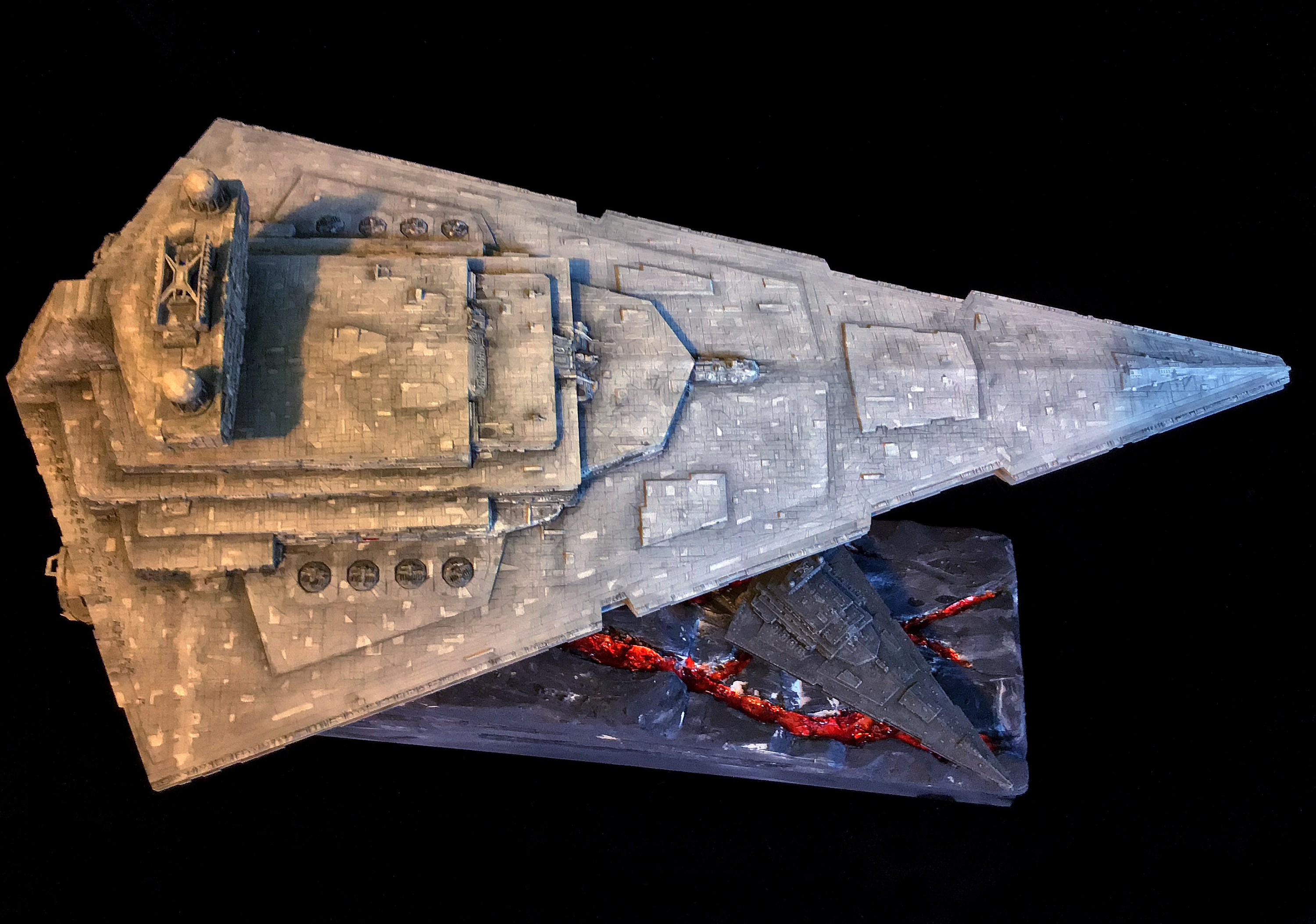 Thank you. It’s enjoyable to engage the imagination and build a kit how you wish to see it; and sometimes you unexpectedly create something that surprises you. Always more to learn!

I love the lava especially - how big is the star destroyer?


Jimw100 said:
I love the lava especially - how big is the star destroyer?
Click to expand...

It looks like it is the Revell 'Build and Play' Rogue One model with a Bandai Vehicle Model SDII below. About 16"/40.6cm.

Jimw100 said:
I love the lava especially - how big is the star destroyer?
Click to expand...

Thanks! I’m not yet proficient with lighting techniques so I dream up alternatives to get similar results, thus the aluminum foil idea. The Revell Star Destroyer is around 16” long; for me, not too big and not too small (it doesn’t take up my garage lol).
Last edited: Aug 21, 2020

Thanks! It was a fun project!

It looks like it is the Revell 'Build and Play' Rogue One model with a Bandai Vehicle Model SDII below. About 16"/40.6cm.
Click to expand...

Yes, it was. Thanks for answering that quickly. One thing I forgot to mention was the kit seemed to be a bit thin where the two halves meet, so I added some styrene spacers to separate them a little more to show up the detail in there and room to add a couple switches for the LEDs.
Last edited: Aug 21, 2020

The tanks and ground vehicles of Star Wars Legion