So, some of you may have followed Jaitea's incredible thread where he converted a Revell Falcon into a fantastic interpretation of Ralph McQuarrie's concept paintings of our favorite Pirate Ship. Well, after he was done, I volunteered a rendered CG model of one of the docking bays in McQuarrie's paintings, to use as a background for photos of his model. Once I'd built the docking bay, though, I couldn't resist making my own version of the McQuarrie Concept Falcon. Before long, Jaitea had seen a few posts on a blog of mine, recording my build, and he was ready for another model of his own.


So without further ado, I introduce the latest progress renders from my CG model which I will use to create schematics for Jaitea's next build. 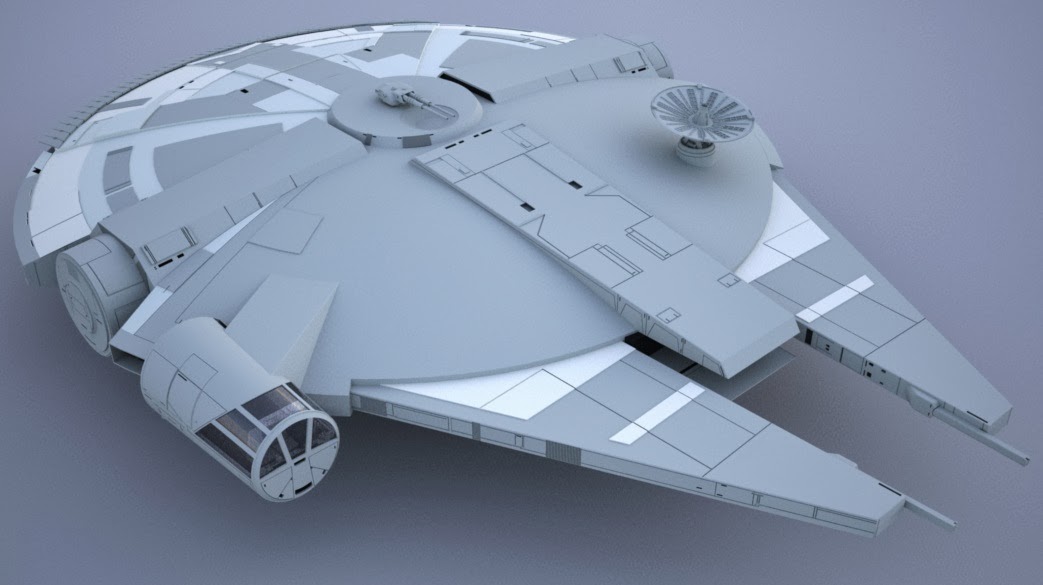 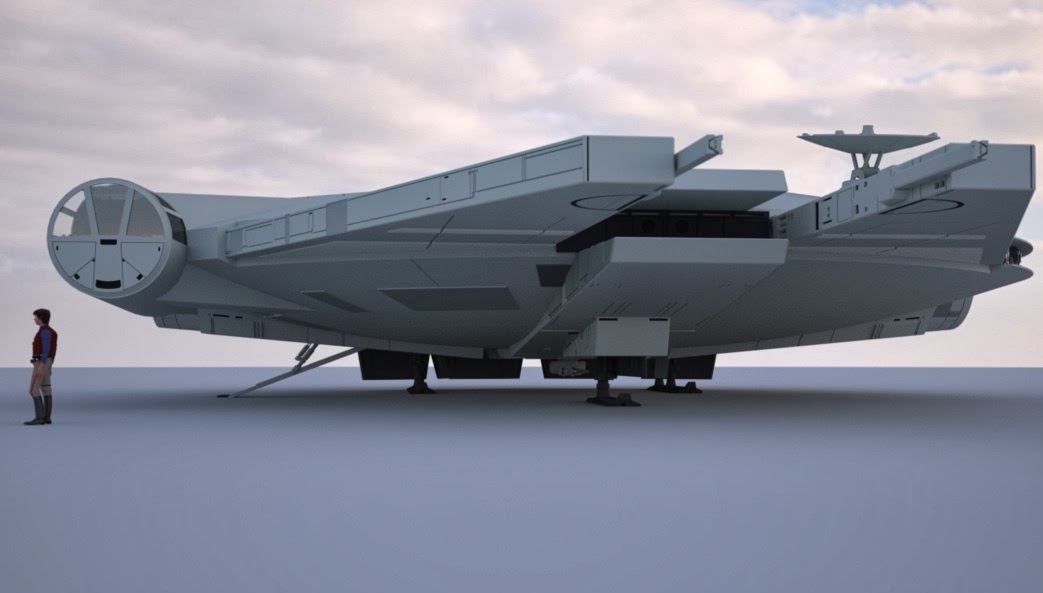 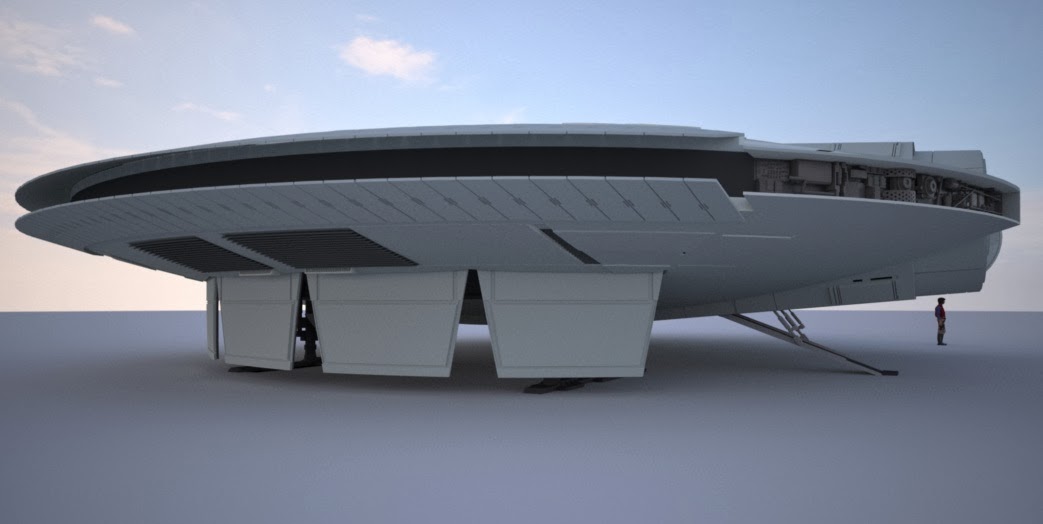 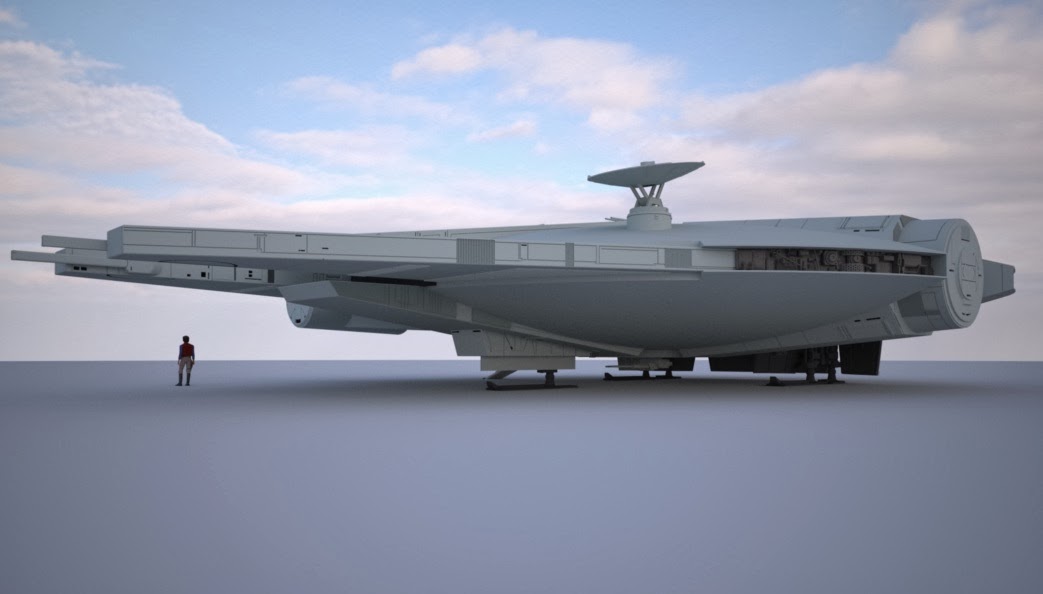 At the moment, there are still a few quarters of the ship that still need attention, but she's nearly done. After the paneling/scribing/greebling is done, I'll add a layer of blast-marks, and hand over scaled schematics to Jaitea. We've figured the final result will be roughly 1:72 Scale.

Many of the details here are very close to McQuarrie's paintings. The mandible areas, for instance, feature geometry drawn directly on top of the paintings imported into sketchup. Ultimately, some details will end up being 3D printed, such as the lasers, ramp, landing gear, and a few other things.

Enjoy! And any comments and critiques are welcome.

SCREECH WOW
This is gonna be great, John's first RMQ Falcon was amazing enough but I can't even imagine what you two will manage to do together. Wow dang snap this is gonna be hot I wish I could get involved

After seeing those renders, I have to have another attempt (need to do something to cover up my embarrassment)

The thing is on my first attempt I had the excuse of there not being enough consistant reference material, I had to compromise & fill in the blanks,......but now with Steves schematics (which also work 100% for the interior) I've got a guide to keep myself right, he also had to make decisions....because each of Ralph's paintings & Joe's sketches conflict each other, but Steve's vision is as far as I can see is the definitive RMQ Falcon

I'm gonna have a crack at making this at 1/72,.....I'm tempted at making a larger scale one, I'll see how this one goes
The good thing is, my last one was built under pressure for a competition, things did annoy me with that build, but I had to accept those decisions because of the time constraints, I think I'll be happier this time

John, no need to be embarrassed, I think your interpretation was awesome! Yours was like a missing link between the complete sleekness of the mcquarrie paintings, and the complete "piece of junk" that ended up on screen. It's brilliant!

Can't wait to see this version getting under way, and I'd of course love to see it bigger. The model I have would make it fairly simple to design all the structural elements necessary to scratch build a bigger ship, if it comes to that.

StarkillerJaitea? oh yeah, great combination! I've got my eyes on this one.:thumbsup

Oh yeah, its gonna be epic

Thanks for the support on this guys, I've made a start on this build......started off with 2 layers of 3mm Foamex board....that 6mm with 1mm panelling top & bottom of the mandibled brings it to the 8mm I have on Steves side view schematic

(sorry for the wrinkled vinyl)

.....it may look like I'm going down the same route as the last time by using the Revell Easykit, but I'm really just using it for the hull curve.

I'm not entirely sure if I like the curve or not,....If I could get a dome with the right curve & vac-form the hulls I would be happier

Hey John, I have access to a large-ish vac former, if you can tell me what dimensions the dome needs to be then I will see if I sort something out. I could form around a polystyrene ball (that has been cut down) or something? Depends when you need it by

printable parts ready to be sent off to shapeways 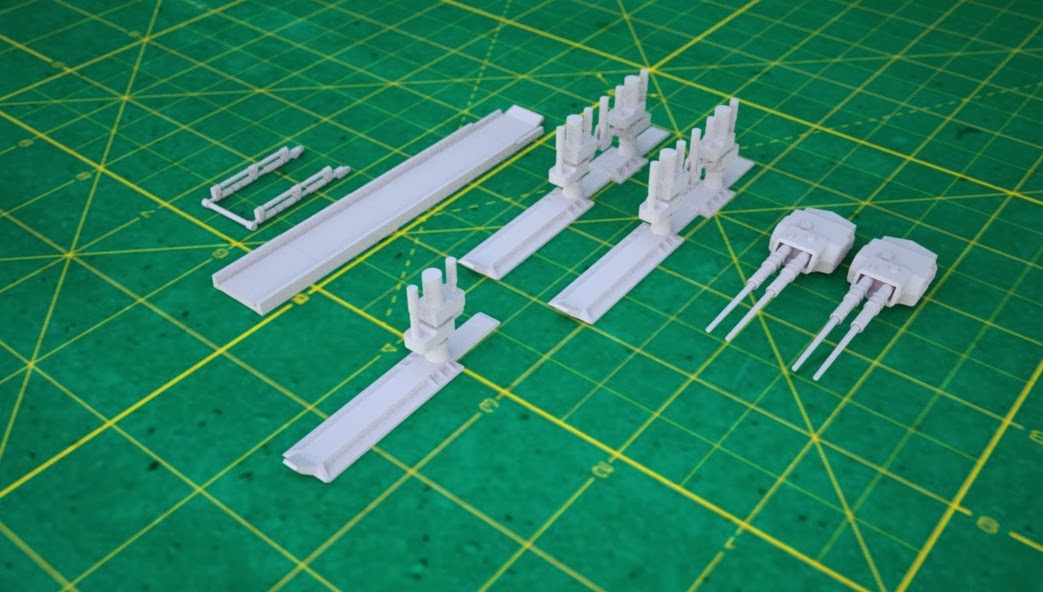 This is amazingly beautiful! What a cool idea and sleek design.

I would like to try myself too! Are Steve's blueprints on the McQuarrie Falcon available for download?

spinner 44 said:
This is amazingly beautiful! What a cool idea and sleek design.

I would like to try myself too! Are Steve's blueprints on the McQuarrie Falcon available for download?

RPF PREMIUM MEMBER
That is awesome!

I'm gonna post my progress photos tonight,....but I'll describe where I'm at at the minute.

My plan was to use the Revell easy kit as a template for the curvature on which I was going to extend its hull further to meet the larger diameter of the center template I made from Foamex.
The first problem I encountered was the curvature needed to drop a few degrees from that of the Revell kit which made an obvious bump in the hull where the Revell was continued.....thats why I was unhappy in my last post.

After that post I persevered and sanded the slope & now the curvature is pretty much smooth.

I was in my local Tesco store (Large supermarket chain in UK) with my daughter the other day and I noticed on a display end (a Xmas display) a large metalic red (or Gold) dinner plate 'Charger'.....It was made of plastic and I thought it looked around the right size and curvature to replace the Revell part & it's extensions

I left it back, went home & measured out on paper the dimentions needed.....next day I checked out with the piece of paper in the store & it's almost perfect.....diameter 4mm short.....no problem,.....the only work needed would be that the plate being a plate has a large flat part for it to sit on which would need corrected,......but that would be easier than extending the Revell kit......as I said I'll post some images tonight to try & explain better
Top view of the Charger plate: Thanks for looking
John

Wow! How much are those charger plates? I want to start tackling my own McQuarrie build...so I assume you'd need 2 of those dome things?