It's been a while! Excited to finally get started on a new cosplay.

For my next one I plan on doing Nyreen Kandros, the female Turian from Mass Effect 3. I've done the pre-production phase to make sure she'll work on a human body but haven't progressed much past that. I decided I should start with the rifle she'll be using, the Turian Phaeston assault rifle. I will be 3D modeling and then 3D printing it. 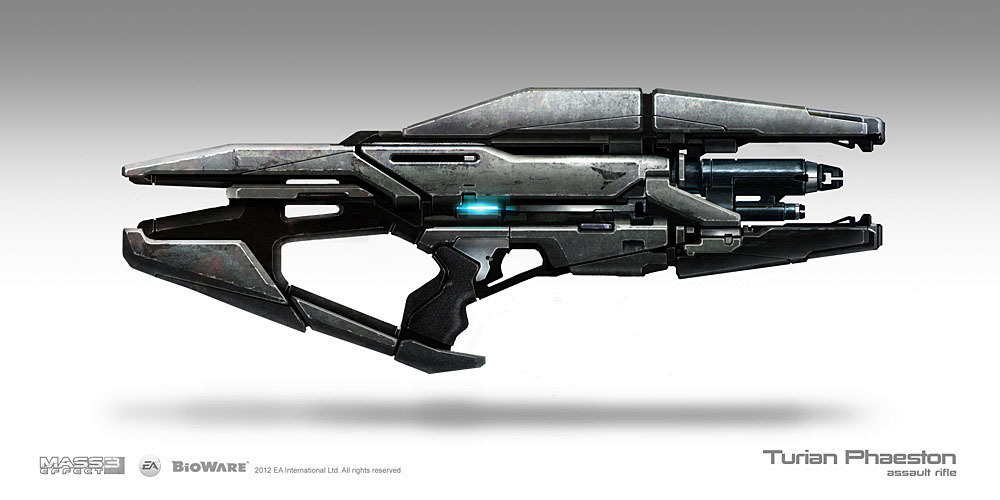 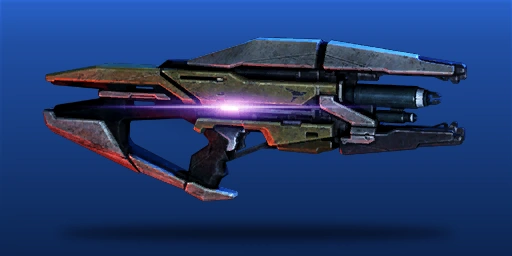 To begin, I found the game model to use as reference. I ended up finding it as part of a pack for Garry's Mod, which required unpacking and converting it to a file type usable by my 3D modeling program, Maya. This takes several steps involving quite a few different programs:

Once I got the model in Maya I could begin analyzing its shape and texture to determine how I would need to model my own version. While I had the original model, it is not very useful for the end product. A lot of the detail you see on the model is actually faked via textures, so I would need to effectively start my own model from scratch, using the original as reference. Even a lot of the beveled edges aren't actually modeled in. I had to try to interpret what exactly the original artist was intending the shapes to be. This blurry bright line here - is it a beveled edge or a scratch? What do I do with this shape that doesn't make any sense when you look at it with the context of the texture painted on top? Things like that.

Below is the model in Maya. You'll note that in the first two images at the beginning of the post, it's really hard to make out a lot of the details. Once I had the model in Maya I could increase the viewport's gamma to really bring out all of those details. Note how few details are actually modeled into the mesh itself.

The original model was not scaled to the proper size, so I had to figure out how big it's supposed to be. I wasn't sure how to go about this. After some sleuthing, I found this article talking about a 1:1 rifle prop you can actually buy. It included the exact measurements. 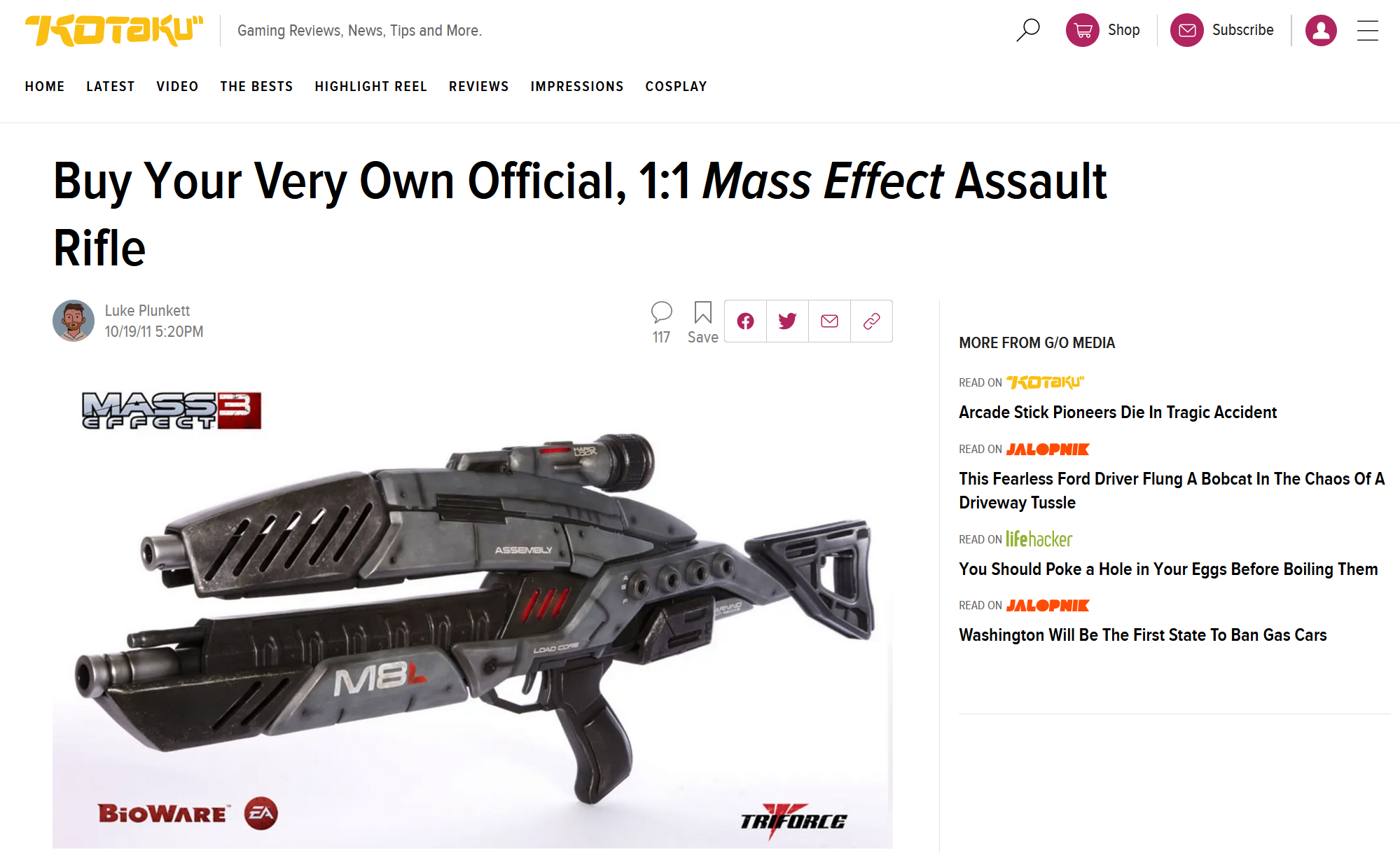 However, it was not the Phaeston, but the M8 Avenger. But even so, that was all I needed! A point of reference. I just had to unpack and convert the M8 avenger game model as well and scale that to the accurate size in Maya, then scale the Phaeston the same percentage. The resulting measurement for the Phaeston is 35.5 inches, or nearly 3 feet (90.17cm). She's a big one!

And here's what I ended up with! This is my completely scratch made model. You'll note that there's some faceting going on, particularly on the round barrel parts. This is because this is the low poly version which will later be smoothed before 3D printing. 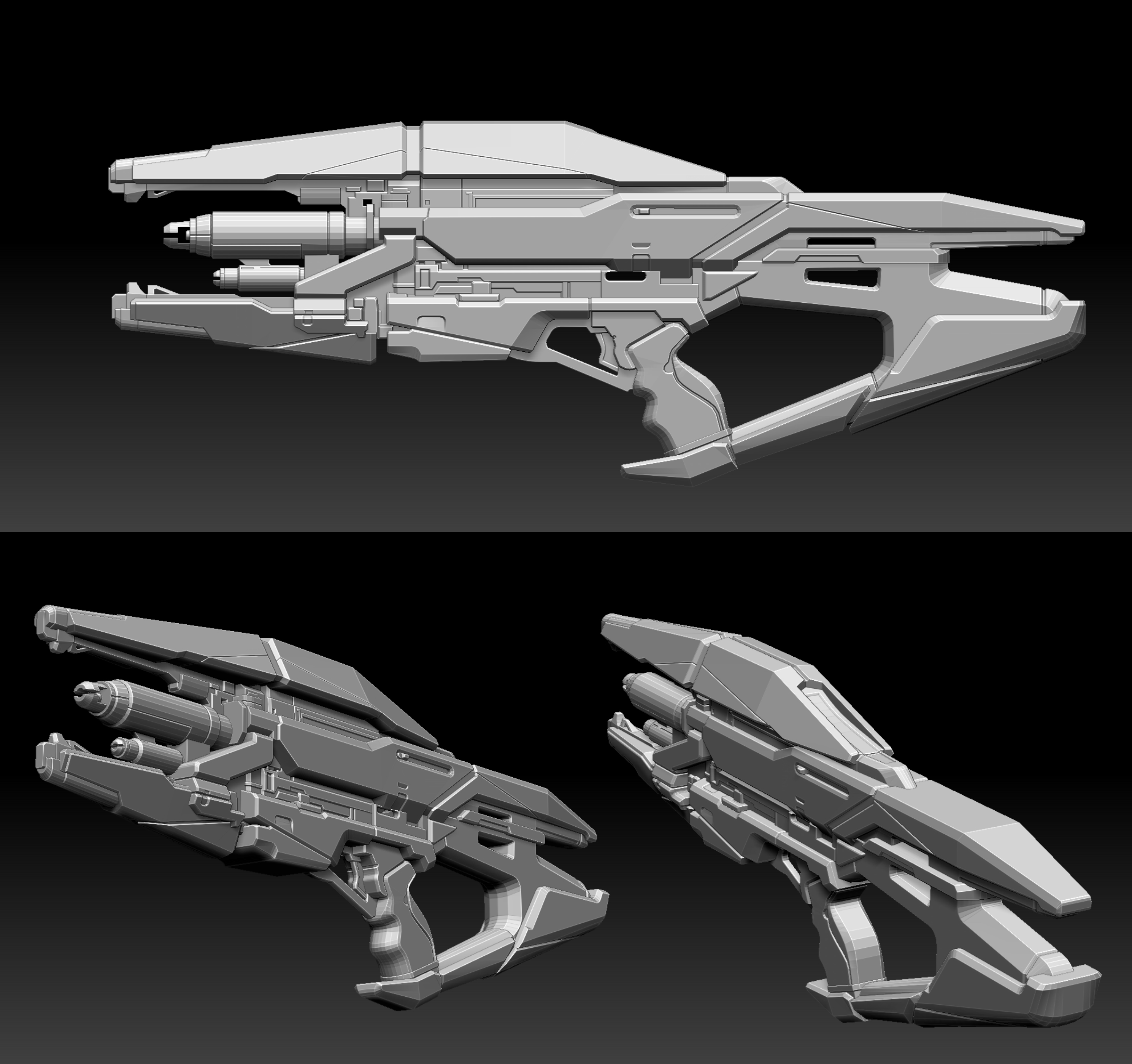 My 3D printer bed is approximately 9"x9"x8", which means it won't be printable in a small number of pieces, let alone the entire thing all at once. I wish.

I've spent a long time tearing the model apart into printable pieces (28 of them!) which involves making decisions about where to divide the model so it will fit on the printer bed and print well, making it watertight, and making it physically possible to reassemble the printed pieces together for the final product. I also need to make sure it will be strong enough when all the pieces are put together, so in addition to being smart about how I divide it, I will also soon be adding in mortise and tenon shapes to the 3D model itself. It's not usually a good idea to rely solely on glue to attach something together. If you instead have mechanical connections (like mortise and tenon) it will be much, much stronger.

In approximately the middle of the rifle there's a small hole above the trigger. This hole will need to house a set of LEDs. To accommodate that, I had to make sure to hollow out the piece that hole is a part of so I will be able to insert the LEDs and battery. I'll also need to engineer a way for the gun to come apart for access to that area, while making sure it does not weaken the structural integrity of the whole rifle.

Here are the 28 pieces and their likely orientation for printing: 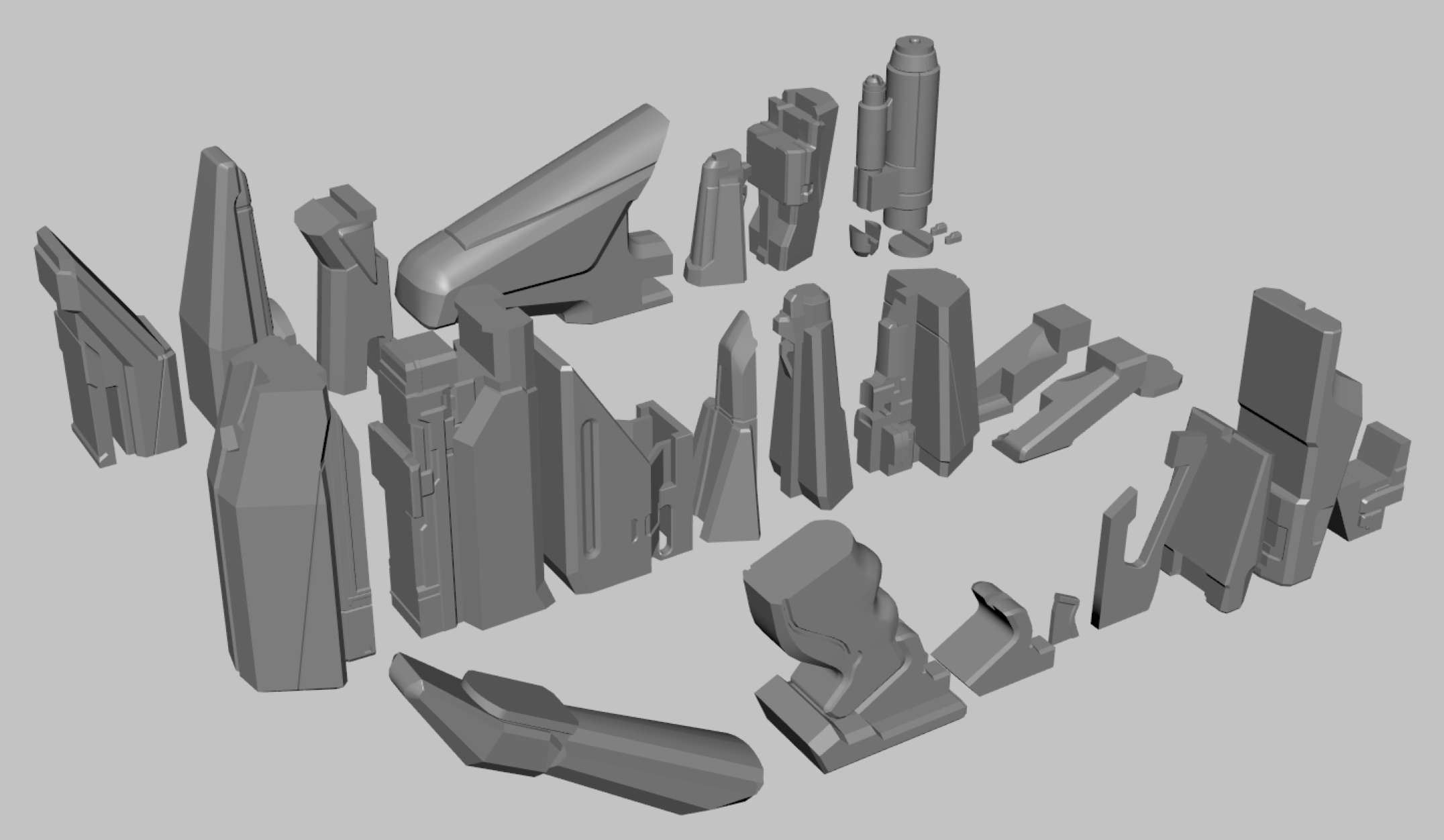 RPF PREMIUM MEMBER
This is awesome. Totally following this thread!

I really like the look of this gun, but always used something else in the games. I can't wait to see how it turns out!
L

RPF PREMIUM MEMBER
Talaaya did you ever finish this? Would love to see the final model!