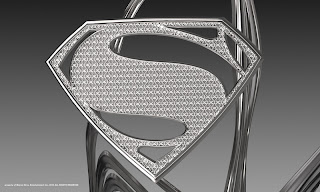 ​
Eddie Yang talks about the design secrets behind the costume in Man of Steel.

Yang is a professional veteran special effects designer and sculptor on films like Iron Man (2008), Men in Black (1997) and Predator (1987).

He talked with me briefly about how Alliance Studios developed the Man of Steel costume. Find out why the belt buckle was so hard to make and check out more images after the jump (click to enlarge). 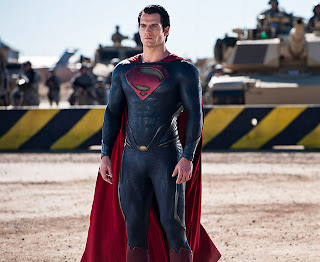 
Maurice Mitchell: Thanks for your time Eddie. So how did Alliance Studios get involved with the project?
Eddie Yang: I was contacted by Shownee Smith of Frontline Studio who made the Spider-Man costumes for Sam Raimi's films. We were actually going to work together on Spiderman 4 before they decided to reboot the franchise. Shownee showed me some of the deisgns they were planning on creating for the new Superman and he thought that using digital technology would provide the best results for the suit.

There were quite a few very thin parts with tapers running very long distances that would have been quite difficult to achieve via traditional clay models so everyone agreed that a digital solution would be best, and we were quite happy to help out.

We met with Jim Acheson and started our battle plan on how we would accomplish this in a short amount of time. 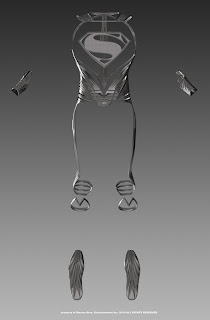 ​
MM: How were the parts for the costume made? 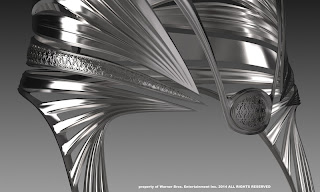 ​
EY: I was finishing up work on The Dark Knight Rises so I needed a strong team to get the ball rolling. Jabbar Raisani was my project supervisor. We had worked together on Iron Man at the Stan Winston Studio and tried getting the old Iron Man team in place.

Paul Wagonner was our lead modeler and Mahito Mistubushi, and Simon Halpern rounded out the rest of the team.

We had mirroring trim parts to make for the wrists, arms (at the time), lats, thighs, boot tops, soles, a belt, collar, belt buckle, front glyph, and cape glyph.

The suit was also still being designed, so we were in constant contact with Jim Acheson and designer Warren Manser. We first started with the arm parts which were later eliminated from the suit. First thing was to determine thickness and getting costume department used to seeing things in a virtual enviroment.

Once the tone was set we began modeling the trim parts as quickly as we could. Once approval was given we finished off the parts by prepping it for molding, by adding a mold wall, keys, and extra shales to maintain structural strength as it went through the molding process.

The parts were then printed out using a 3d printer and then finished off through traditional body shopping and delivered to Frontline for molds, casting, paint, and integration onto the final suit.

MM: What was the biggest challenge making the parts and how did you overcome it?
EY: The front glyph, belt, and the belt buckle were the most challenging for us at the time becuase it had to have the chainmail details that the suit was covered with and the belt and buckle needed the same pattern to buldge over a rounded surface.

We were trying to think of fancy ways to achieve with 2D displacement mapping and extrusion techniques, but in the end decided to create each link of the chain mail in 3D to have the most control over the pattern.

Because the pattern also tucked into the borders of the glyph, we also created a custom script to cut the chainmail right along the edge of the borders which required working with high res models slowing down our workflow a bit.

The results were pretty amazing but I dont think anyone realized how much work we put into those parts. They ended up asking us to make three more glyphs for Faora, Zod, and Jax. 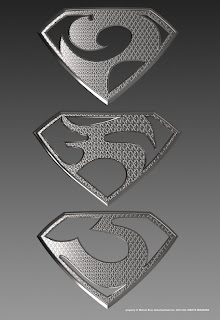 The plot is described as "a documentary crew follows an elite unit of soldiers in the wake of an alien invasion."

Jabbar Raisani, my project supervisor on parts mentioned above got an opportunity to direct his first feature film. It's a high concept film he created with co writer Blake Clifton being produced by Jason Newmark, and Laurie Cook. All of us just recently got back from shooting ten weeks in South Africa and are pretty excited with what we accomplished on a small budget.

The film stars Joe Reegan, and Rick Ravanello, and has creatures played by monster man Doug Tait! It will be jam packed with traditional creature FX, make up FX, and plenty of visual FX as well.

There is even a kind of visual production diary on Facebook at Outpost 37.

What do you think of his work?

Great info! :thumbsup
Thanks for posting it.
Thom

Awsome info good to know.
Im starting my MOS costume and sucking all the info I can find