Last year I embarked on a personal project to recreate a screen accurate Luke's ROTJ Hero saber, eventually deciding on the ISYHCANL configuration: 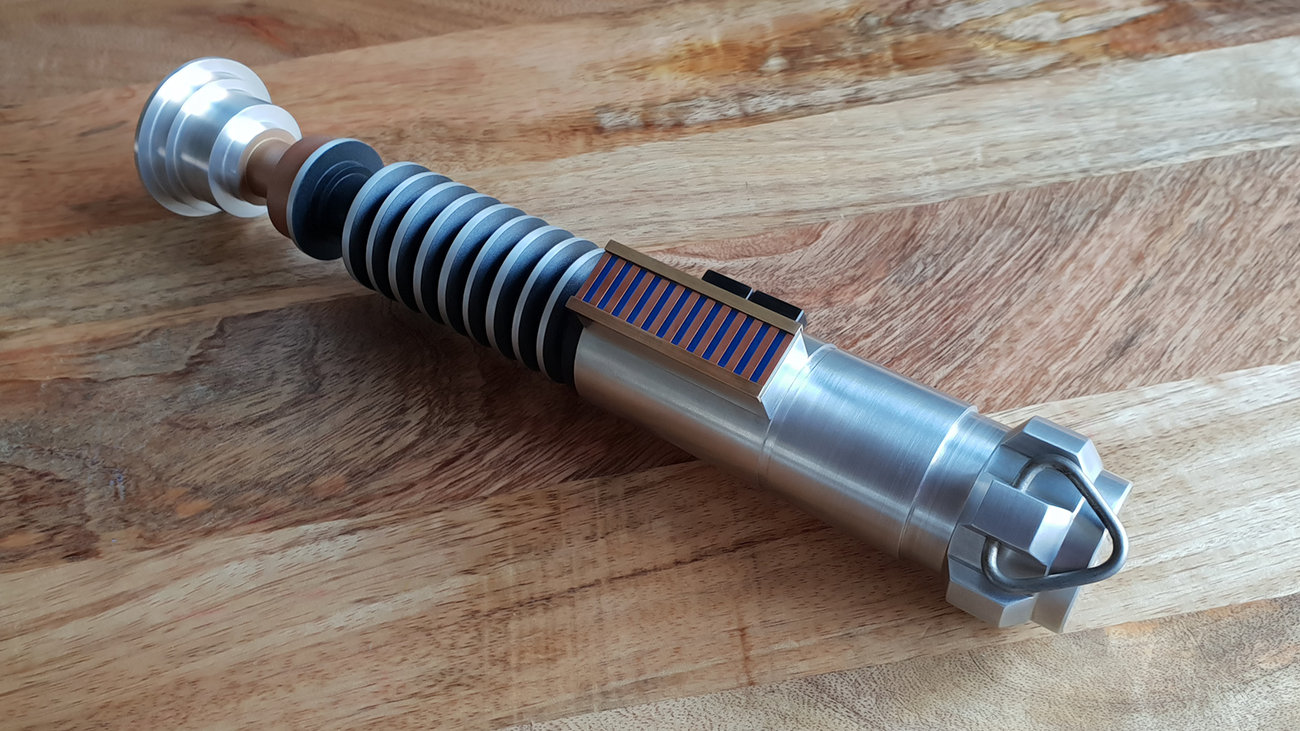 I won't go in to too much detail, as you can see the project thread here.

I now find myself deciding on my next project, and whilst I do have a few other ideas brewing, I can't help but think there is so much more I could do with this one, before moving on to something else. The 3D model that has emerged from my investigations over the past year is incredibly close to the original prop (as can be seen in the comparison images bellow). It is the result of meticulous cross referencing and endless adjustments against exhibition photos and high resolution scans of OT footage. 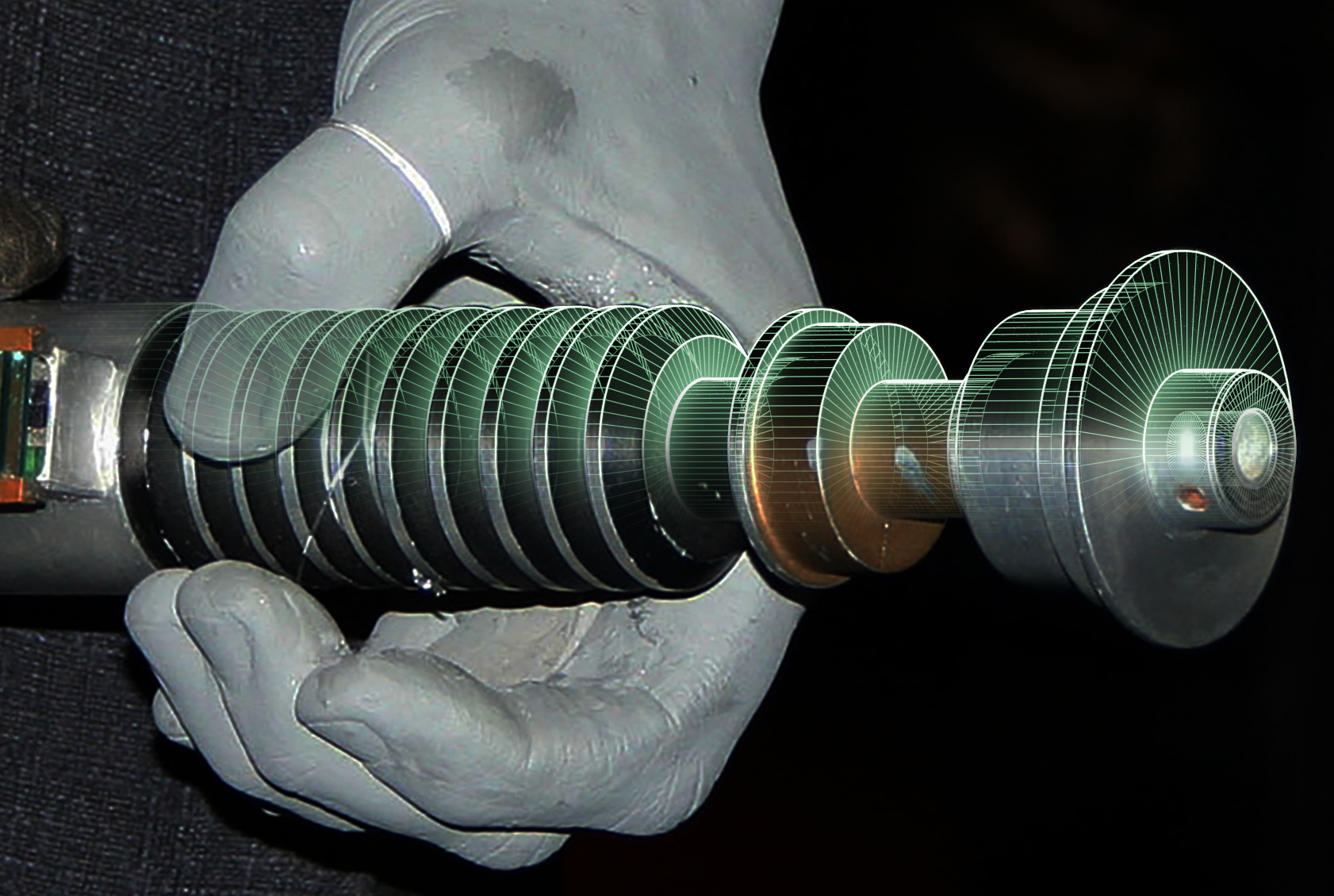 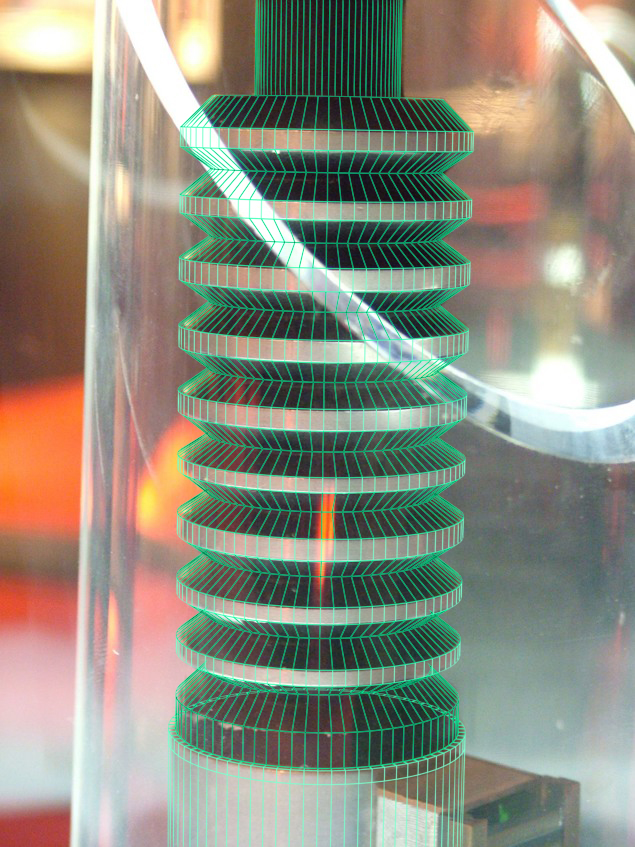 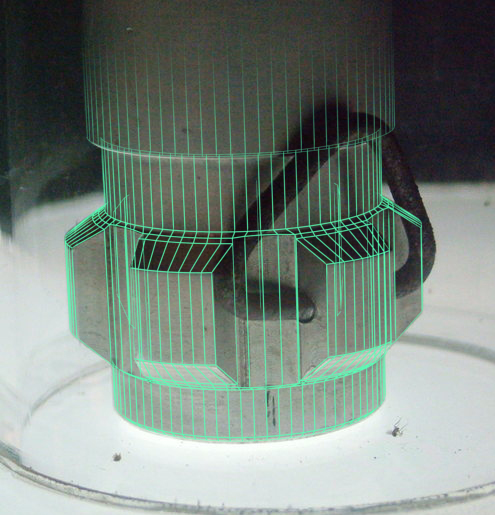 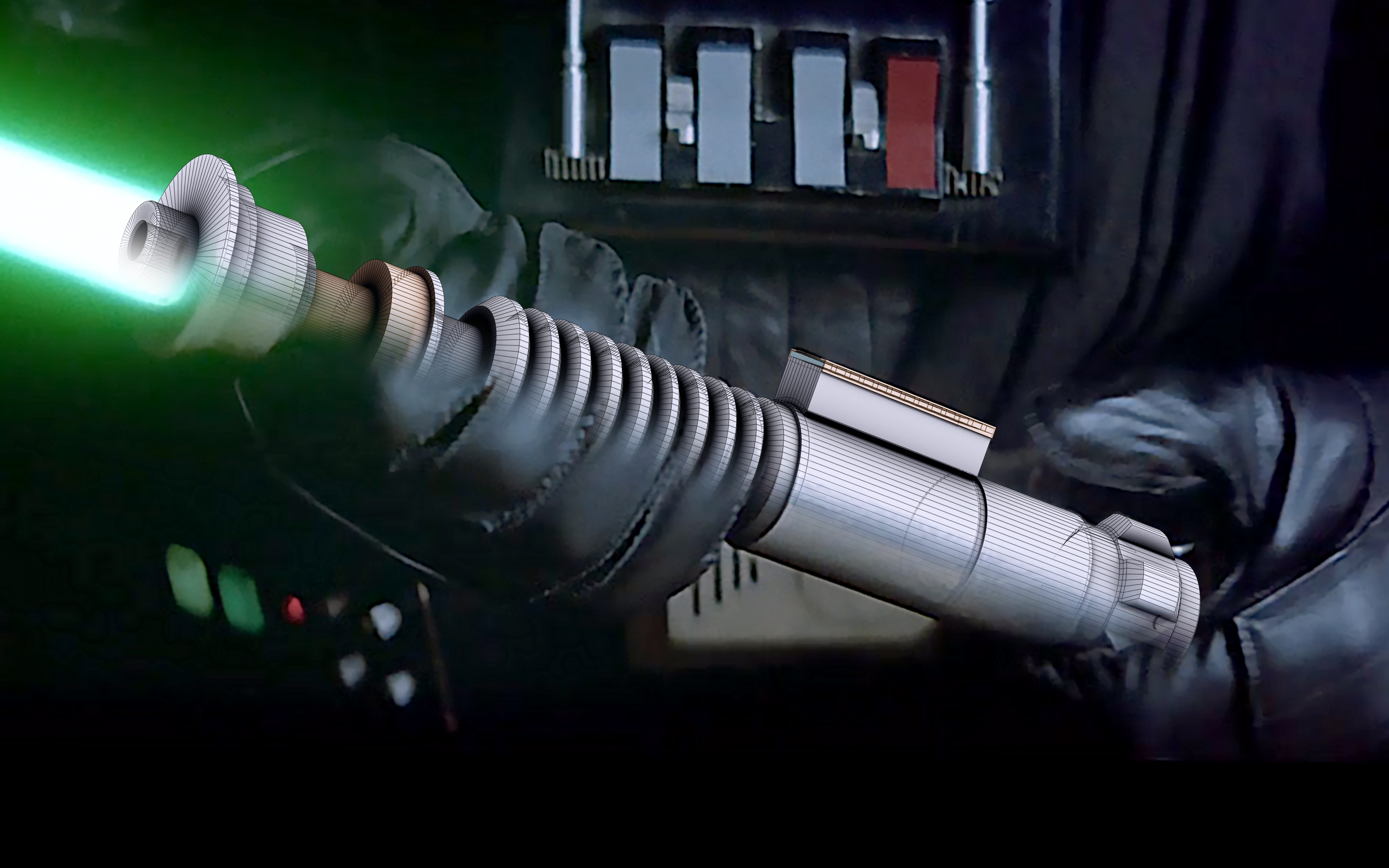 Early on in the project I was undecided on which version of the prop to do, so I have models of the Yuma, the ISYHCANL, and the "Cave Hero" control boxes all ready to go in to production. I recently updated my Yuma box to better match the latest 4K reference images that have become available.

Here is a 3D render to show everything that I plan to include as part of this kit: 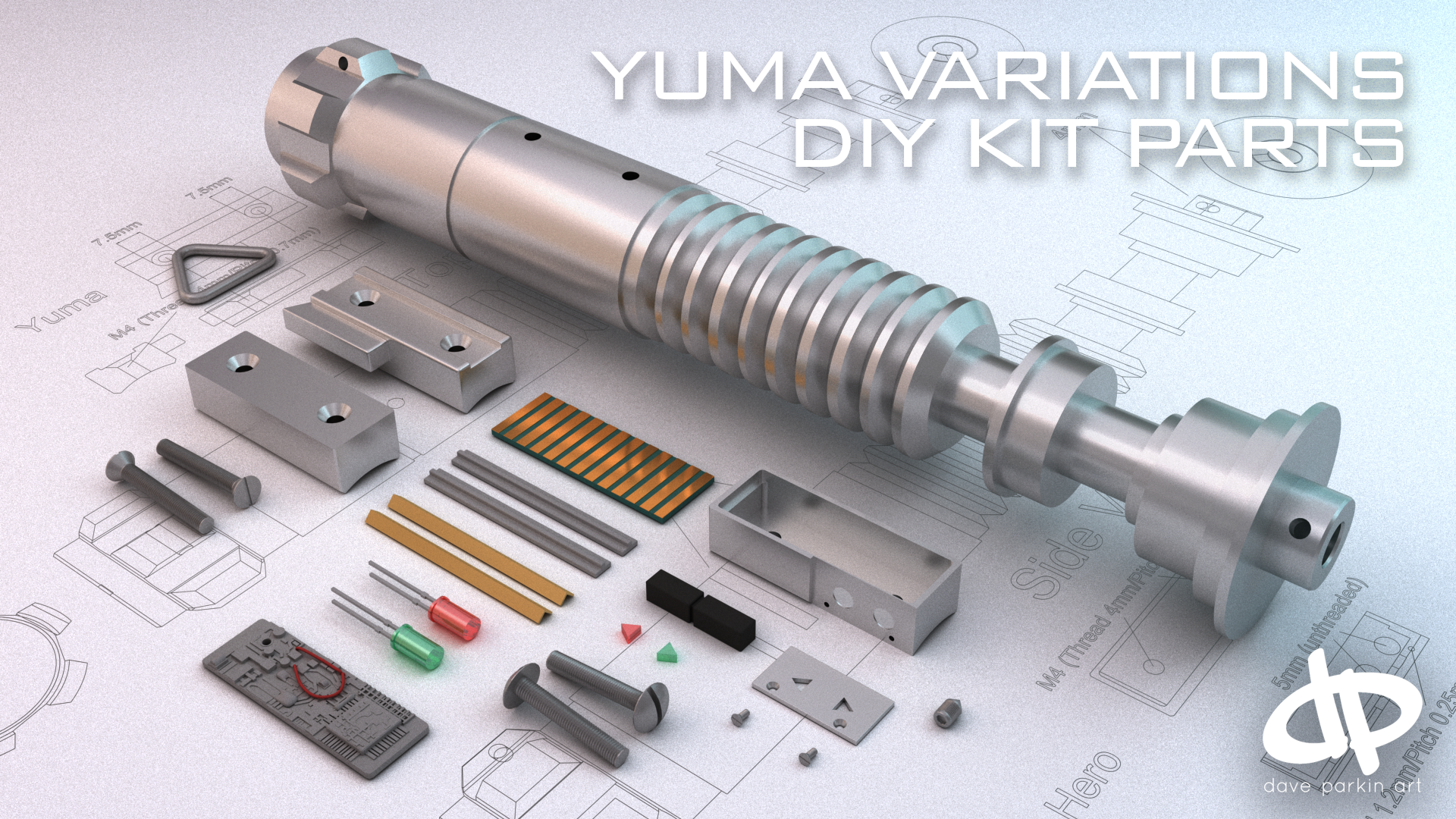 There are a LOT of great options available for creating your own ROTJ Hero, and they all look fantastic! Some are incredibly complex, and offer a plethora of different parts for creating FX versions of the hilt. If that's your area of interest, what I'm offering here is probably not for you. I'm offering a solid, piece of aluminium, in keeping with the original prop. This is a static prop replica. The body is a single piece weighing just short of 1KG! If that's your thing, read on!

I have added all drill points to my original model and each version of the control box to reduce the amount of work involved. These are threaded and all necessary fixings are included.

**The kit will now include ALL parts needed to make whichever Yuma version you prefer! (Please see updated price)**


*As I already had *Some* of the above materials in stock, I have only increased the overall price by £20!* 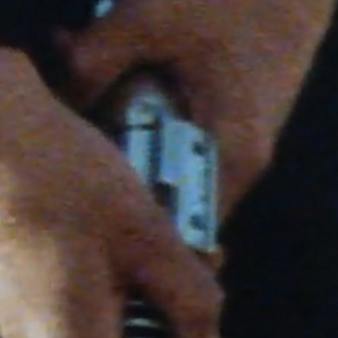 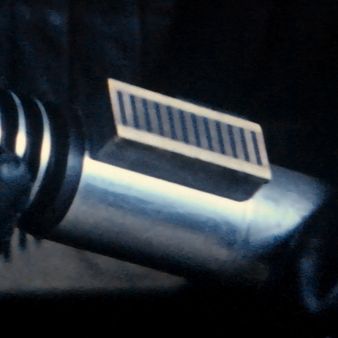 The "HERO" box (Updated to include 5mm holes for optional LEDs, and ledges for internal circuitry) : 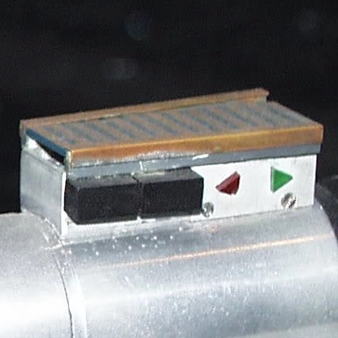 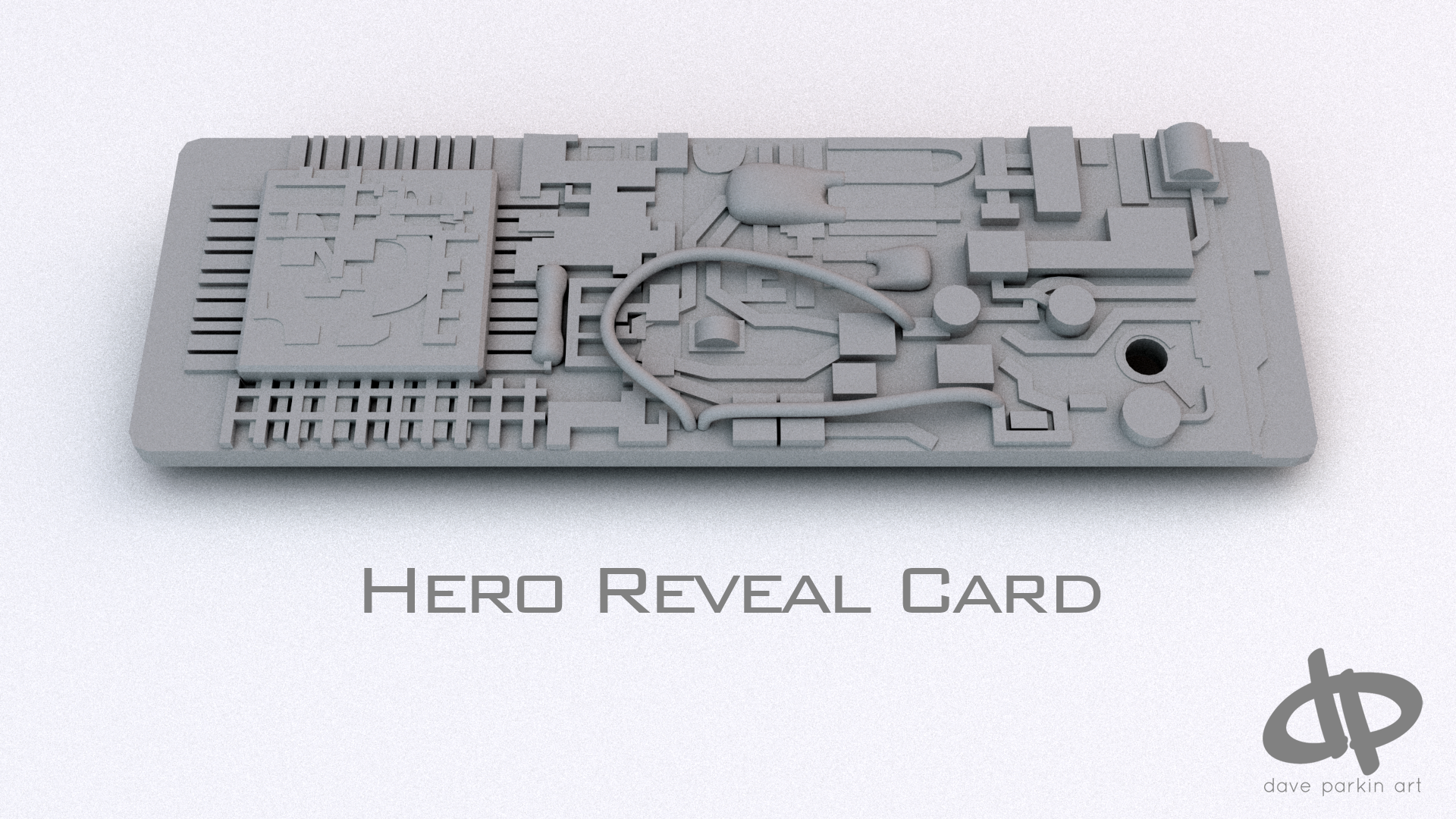 This is how the various parts of the Hero box assemble:

Because of the sharp internal grooves in the grenade section, additional precision/special tolerances were required when pricing up the machining of these parts. It was a choice between altering the model to work within the limitations of standard tolerances, or pay a little extra for 100% accuracy. I went with the later (obviously).

All parts will have an additional surface smoothing operation applied to decrease surface roughness (Ra) down to 1.6μm (63μin).

Here are some images of the parts from my previous project as they arrived/straight out of the box: 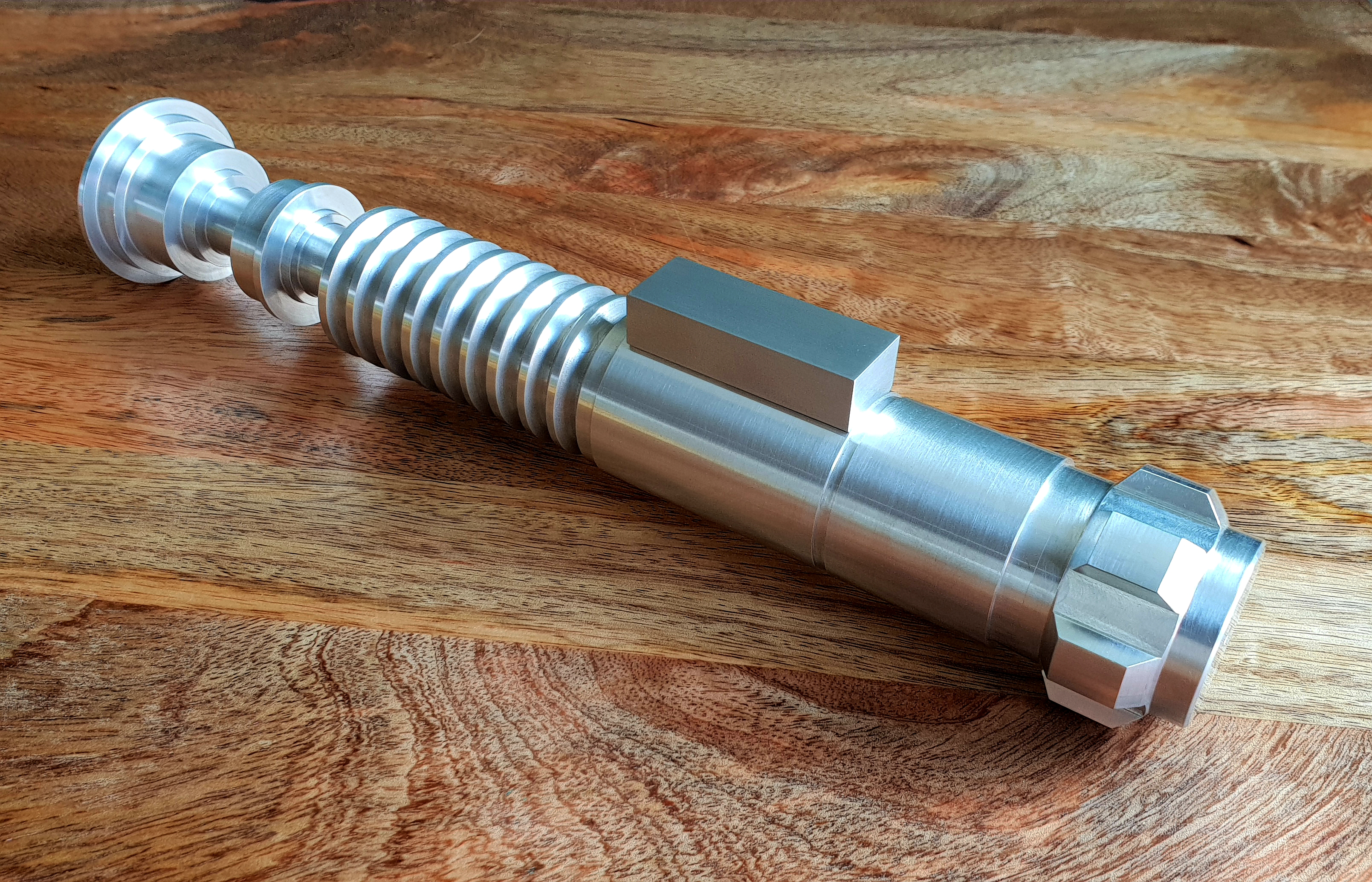 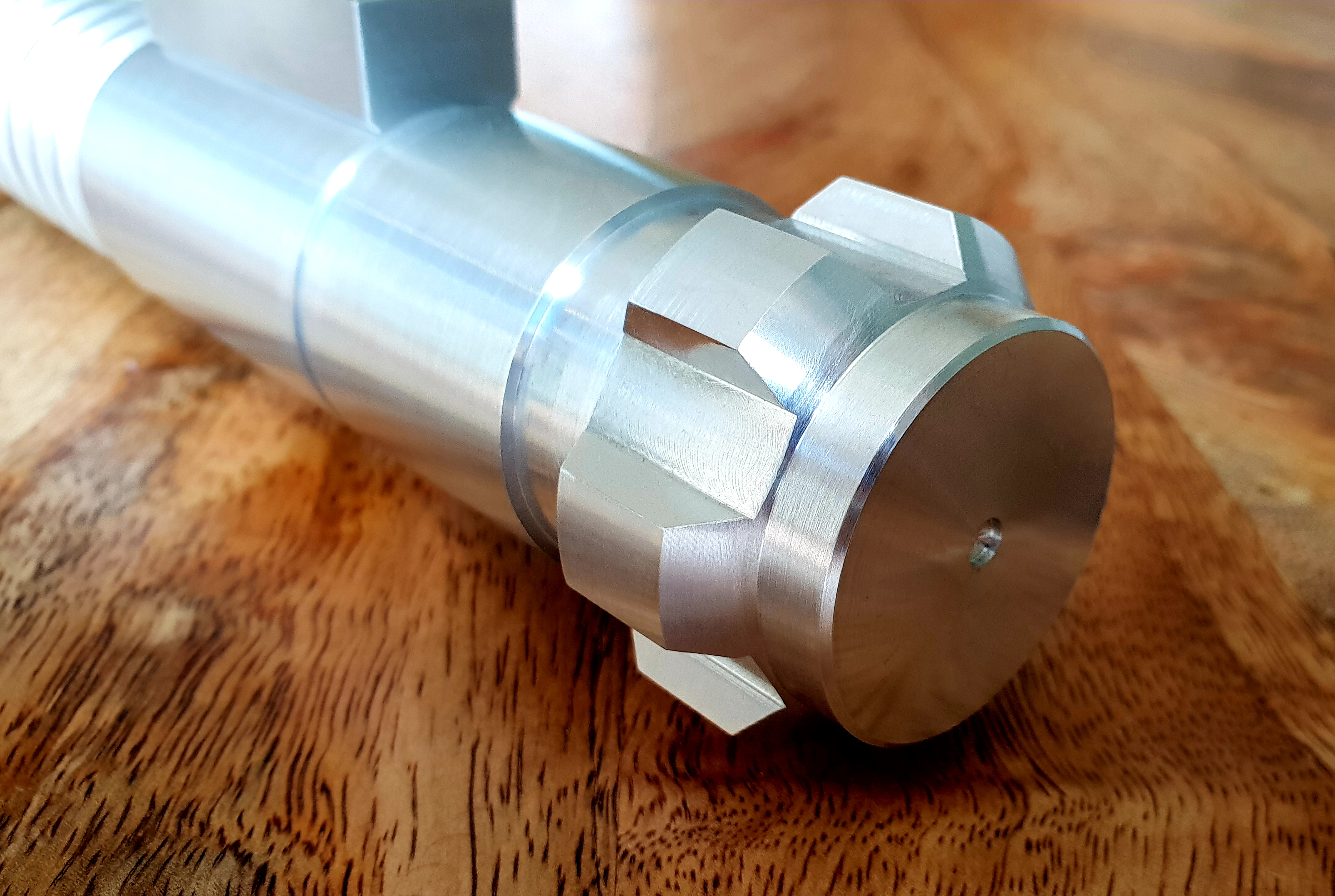 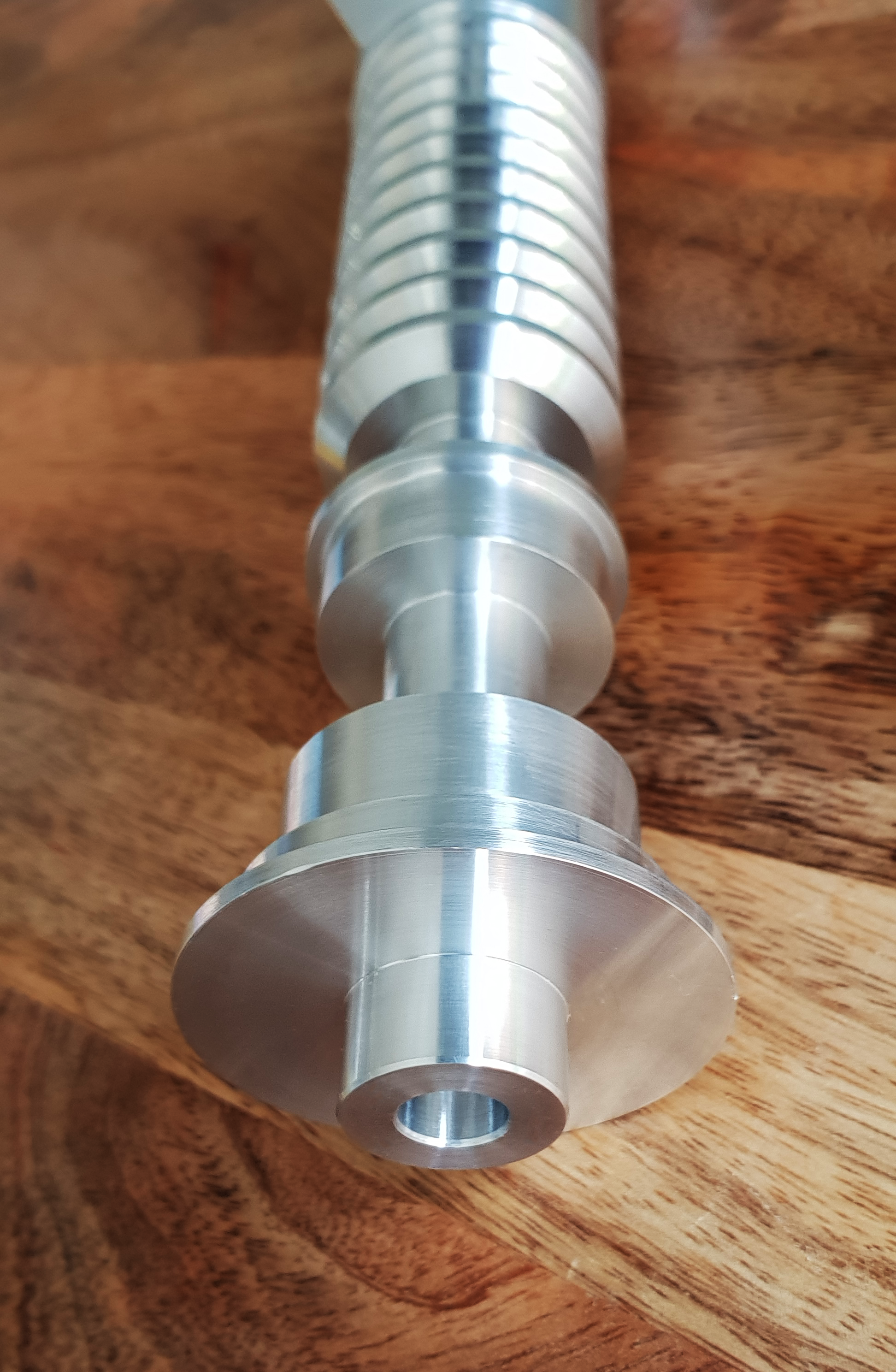 And a few images of one of the finished hilts in the I.S.Y.H.C.A.N.L ("I see you have constructed a new Lightsaber.") configuration: 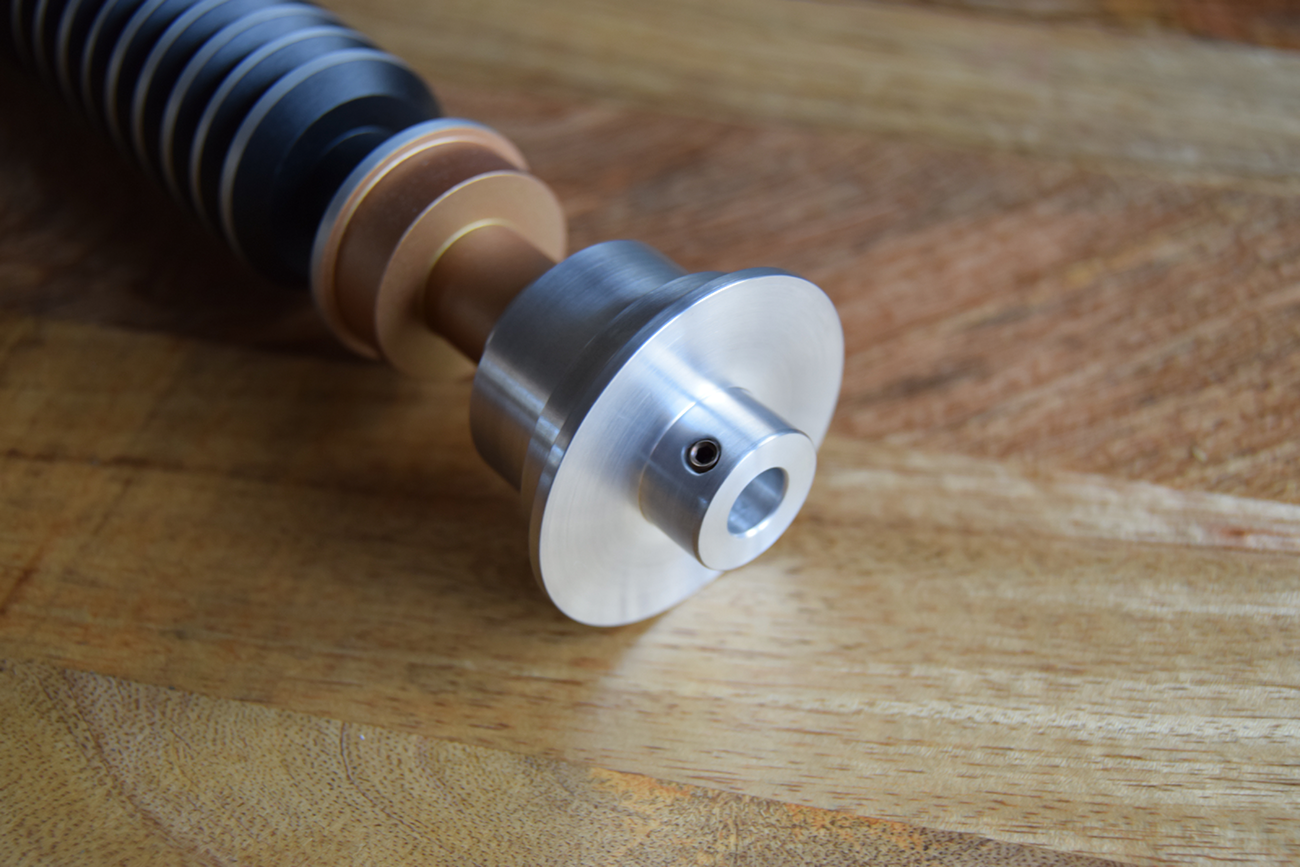 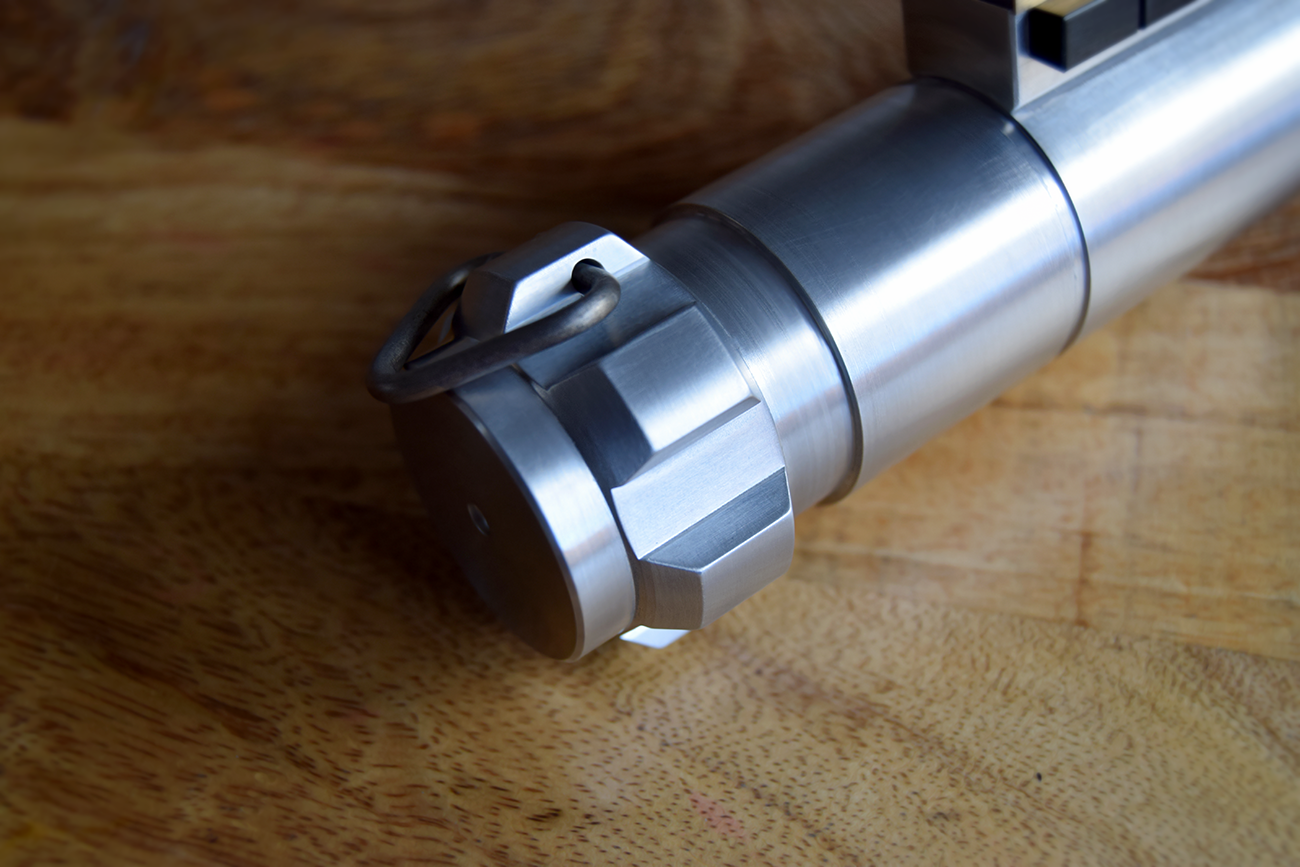 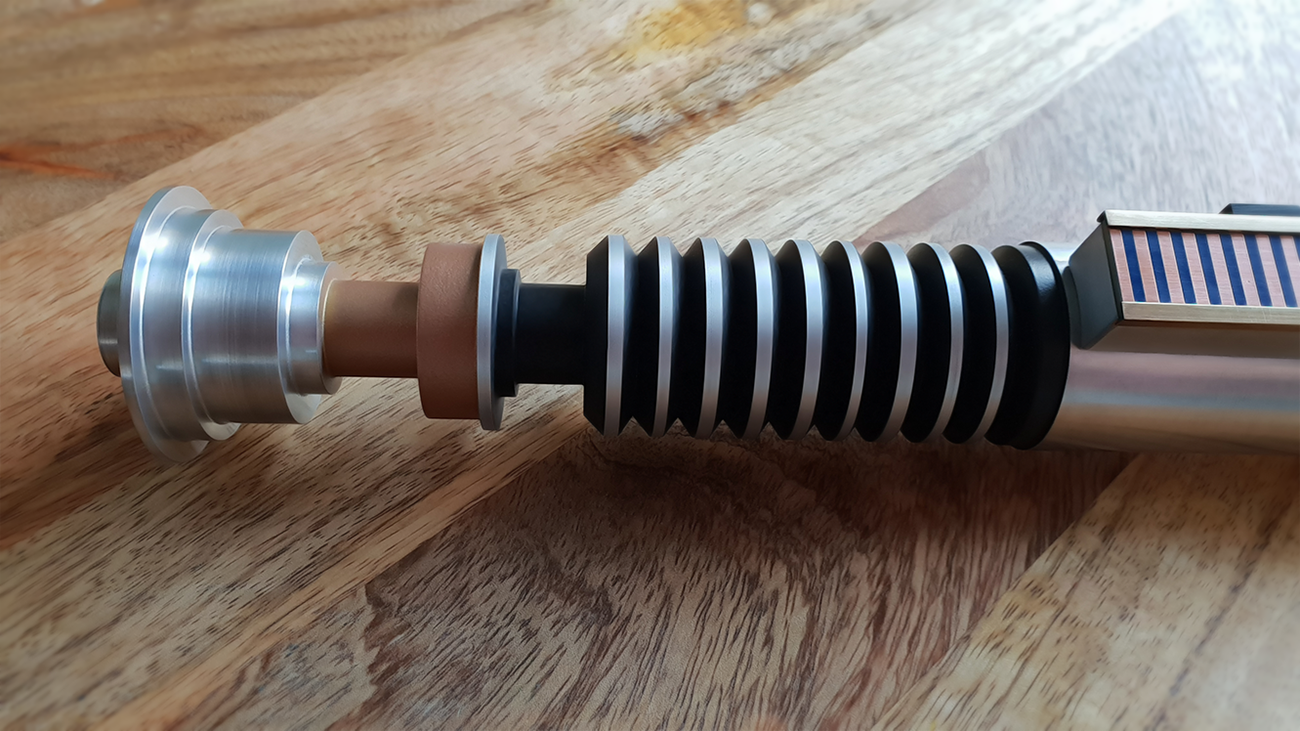 Here are a few images of the kind of standard you can expect from the additional parts that will be supplied with this kit: 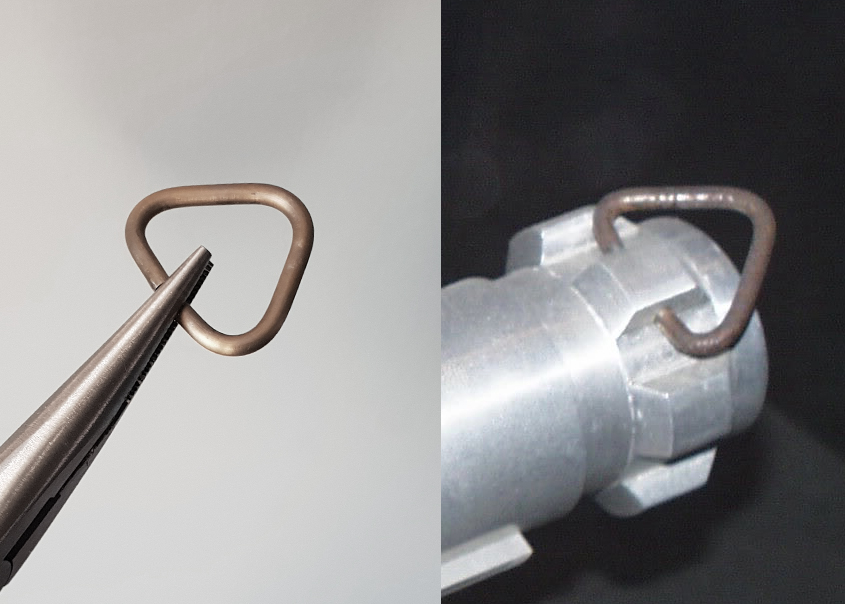 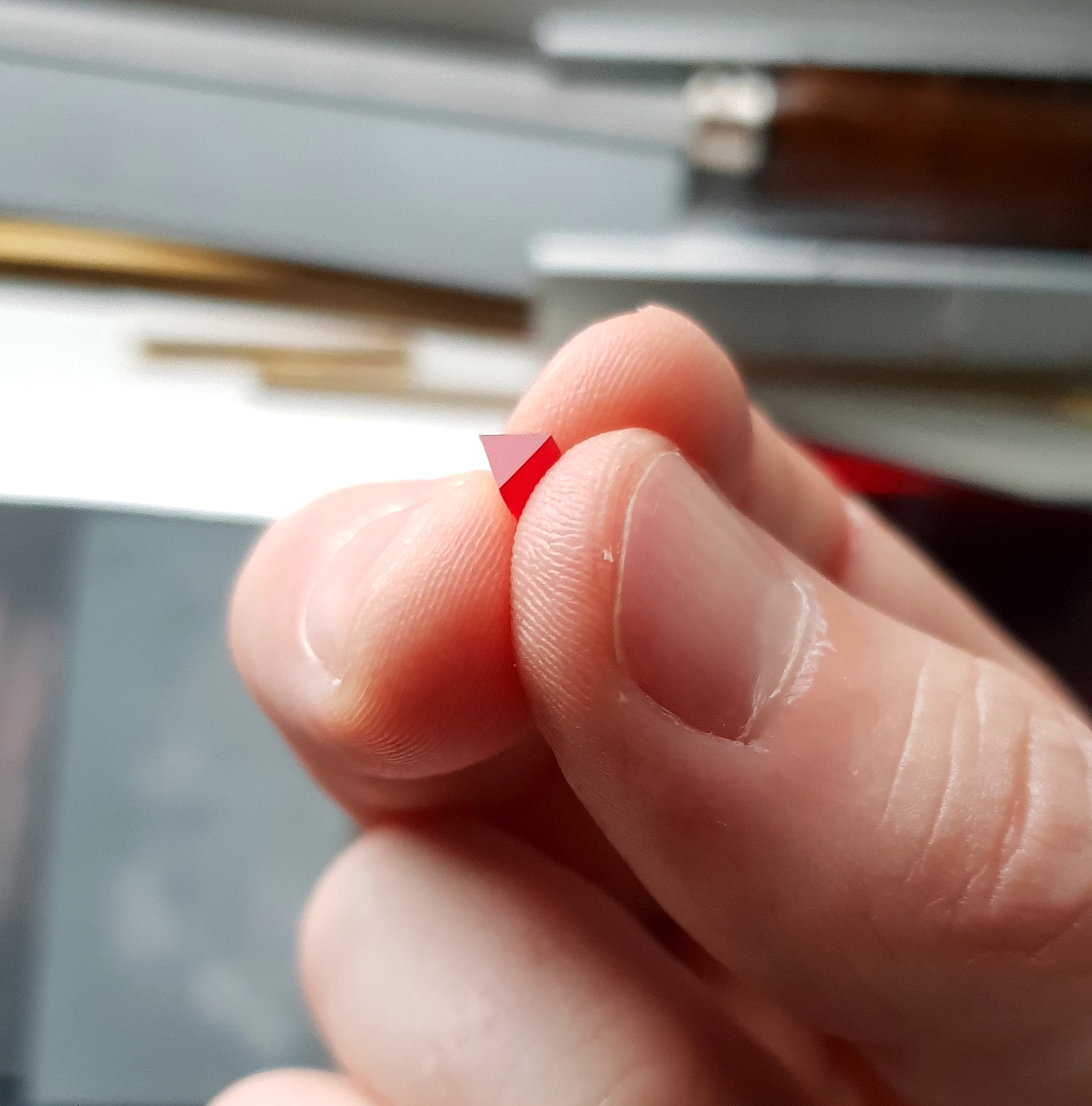 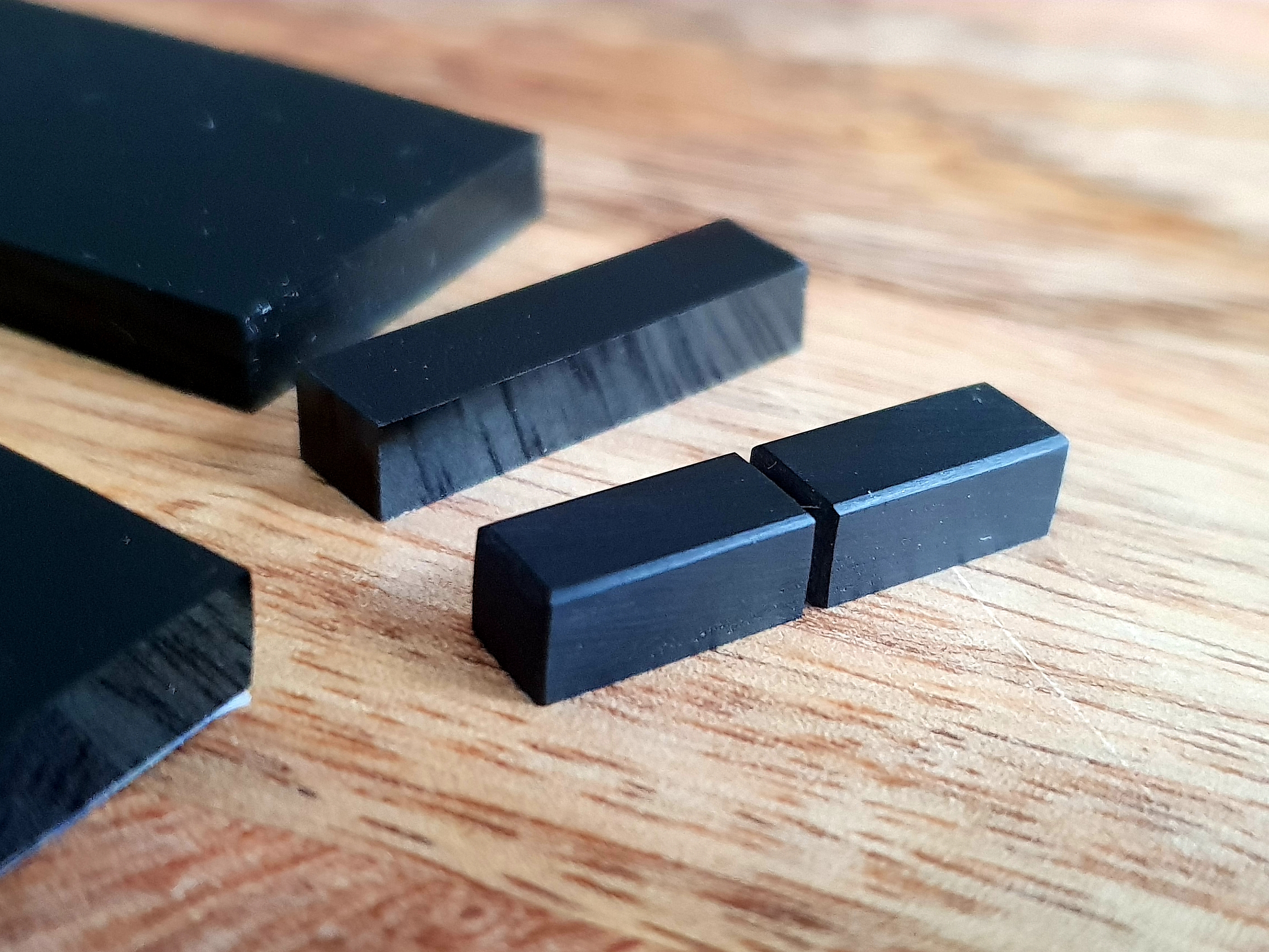 I have had the new aluminium parts approved for production, and I've received quotes for various quantities. As with my previous project, this isn't a money making venture. It's about getting enough people interested to bring the cost of each kit down to a reasonable price. For that reason, we'll need at least 25 people to sign up. The cost of having a single kit produced is out of the question, but with enough interest, we can get these made and embark on what should be a great saber project!

So, here is the price:

**I've removed the option of going ahead at a higher price if 10-25 people sign up (it was a little confusing).**

This is just an interest thread at this stage, but *the order is ready to proceed* as soon as there are enough people involved.

If/when the project has over 25 people interested, I'll get in touch with everyone to confirm their intentions to go ahead.

The project will then require upfront payment (Through Paypal so you'll be protected). Unfortunately lead times have doubled from two weeks to thirty days due to the corona virus. This is to be expected considering the terrible situation in China. Hopefully, by the time there are enough people interested for this project to go ahead, things will be looking better for everyone!

Please give me a shout in the comments or PM if you're interested. No commitment at this stage.

If you have any questions, feel free to drop me a PM

May the force be with you!

I'm not sure if I have enough money to buy. I recently spent a lot of money on medical masks to prevent the plague.

I'm willing to keep accumulating money for it.

I'm not sure if I have enough money to buy. I recently spent a lot of money on medical masks to prevent the plague.

I'm willing to keep accumulating money for it.
Click to expand...

I'm sorry to hear that! Stay safe. Hopefully this thing will be over before it does too much more damage!

That's great, Mike. Cheers! I've added a couple of lists to the bottom of the thread.

RPF PREMIUM MEMBER
How would the payment work? Would we pay the £240 first then get the difference back if 25+ people are on board?

SenorChang said:
How would the payment work? Would we pay the £240 first then get the difference back if 25+ people are on board?
Click to expand...

I'm just gauging interest at the moment. I won't be asking for any payments, or placing the order until I have a better idea of how many people are interested.

If we get past the ten person mark, and it doesn't look like we're going to make it to 25, I'll get in touch with those who have expressed an interest to see if they still want to go ahead at the higher price.

I'm aiming for the 25 mark though, so I 'll keep the interest thread going (within reason) until we get there.

Once we have the numbers, I'll go through the list and ask people to confirm their intention to buy.

As soon as it looks like we've definitely got 25+, I'll start accepting payments, and process the order when everyone has paid.

Hi Dave, sorry but I mistakenly posted here, as I already have one of your beauties. There are too many RoTJ saber threads up. Thanks!

el toro said:
Hi Dave, sorry but I mistakenly posted here, as I already have one of your beauties. There are too many RoTJ saber threads up. Thanks!
Click to expand...

No problem, Mike. It's not looking like this one will run to be honest. I had a feeling it might not. Like you say, too many ROTJ hilts available at the moment! I spent way too long on my finished ISYHCANL run and missed the boat on this one. It's a shame, because I believe these models are pretty much as close as you can get to the real thing. Really wanted to make myself a screen accurate Hero and Yuma, but without the numbers the production costs are just too high.

I'm going to keep the thread open for a few weeks and I'm considering adding a few bits and pieces like tri-rings and rails if I can figure out pricing.

Not to worry though. In the words of a wise old Jedi, "there is another" . I have another project in the works which I'll be announcing later today.

**I've removed the option of going ahead at a higher price if 10-25 people sign up (it was a little confusing).**

RPF PREMIUM MEMBER
Just giving this thread a bit of a bump!

I had thought the idea of offering people the main parts needed to do their own scratch build, at the lowest price possible, might have been more appealing. I'm considering having a bit of a rethink on what's included in this kit though. Obviously the timing of this run isn't great. It's running along side a few other Hero runs, so it was always going to have difficulty. I have another exciting project in the works, but It really does seem a crying shame to not do something more with this model before moving on to something else.

I'm currently looking in to an improved method for creating the Tri-Rings. One which will allow me to include them with the kit. I've got a source for the rails and other materials needed for the plate, etc. My initial idea though, was to provide people with a starting point from where they can go off and source the parts they need for whichever Yuma version they wished to make. I may have to think about pricing up the other bits and pieces and including them at a slightly higher price?

Personally, if I had the option of getting these parts made again for myself as a one off, at the above price, I'd jump at the chance. Unfortunately, I just need 24 more people to come along for the ride!

Interested for sure. The hero is one ive held off on getting because I want a strictly static, screen accurate version, and this seems a great option that you have really put the time into.

Djblingbling1 said:
Interested for sure. The hero is one ive held off on getting because I want a strictly static, screen accurate version, and this seems a great option that you have really put the time into.
Click to expand...

Thanks. Much appreciated I'm definitely going to look in to adding some more bits and pieces before it goes ahead. I'm thinking the missing plate and Tri-Ring could be putting people off. I'll bump the thread again once I've figured out a few things. I'd like to try and keep the price under £200 if I can. Thanks again.

That's great! Thanks. I've just updated the thread to have one "interested" list, instead of a "definite" and a "maybe" list. If we can get to 25, I'll get in touch with everyone on the list to see if they'd like to go ahead. I'll have a better idea of what additional bits will be included by then too. Cheers!

Sorry. I thought I'd already replied to this. Didnt realise you'd posted on both threads. That's great! Thank you. I'll add you to the list.

A few people have expressed in interest in me including more parts... So I have. It now includes everything needed (except paints). I was worried that this might increase the price too much, but I've managed to keep the whole thing under £200!

Please read through the original post again for a full list of what will now be included in the kit.

As always, if you're interested, please leave a comment, or PM me. No commitment required at this stage.

RPF PREMIUM MEMBER
Added a few more comparison shots to save people clicking through to a separate thread.

This does interest me.