thd9791 said:
God those nails better be shorter than the thickness of the shoe's sole!!!
Click to expand...

If you wear boots now, like Doc Martens, you'll notice how thick those soles are. In the old days, especially the militaria those boots are patterned from, they were originally made of leather, so they're fairly robust. In fact, the molded grips in the synthetic soles today actually pattern themselves on the kinds of hobnails used then.

RPF PREMIUM MEMBER
pulled from the Jack boots to be used for the costumes and repurposed no doubt. Makes a lot of sense. 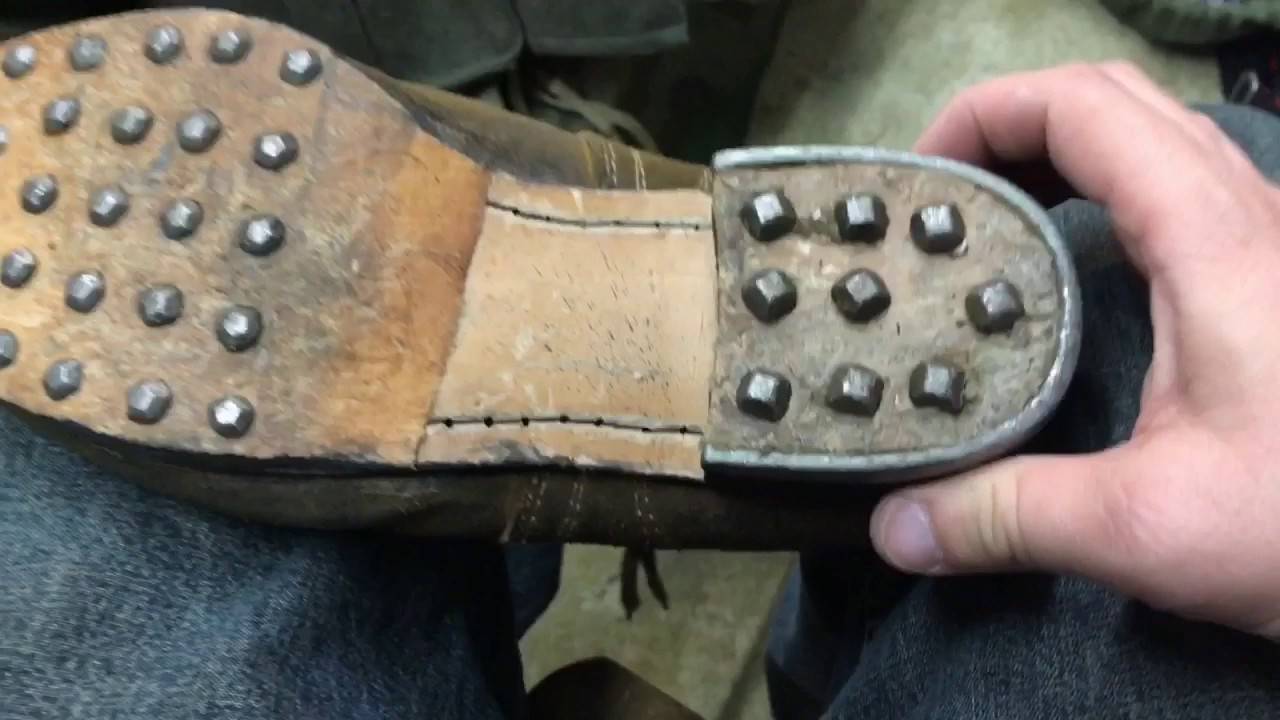 PoopaPapaPalps said:
To stoke the flames of interest once more into what the Mystery Chunk might be (inspired by the recent new pics of the Bunker Detonator from Prop Store), I did a little more searching recently.

Could the Mystery Chunk be a variation of some kind of hobnail?

Now, these aren't right but as far as "real-world" items that come close to what the Mystery Chunk might be, these are the closest I've come across. The ones pictured are Swiss/Mountaineering hobnails. There are others in abundance without the blackening and are WW2 vintage, only minus the checkering/knurling on the face. I've purchased both to see what can be done with them. Will definitely be letting this thread know once I get them.
Click to expand...

I think you are on to something there. Here is another type that is used by the Germans during WW2.

not the same but shape is similar. It makes sense that if they were using surplus German tanker/jack boots, they might have removed some of these and had them laying around.

Trooper_trent said:
pulled from the Jack boots to be used for the costumes and repurposed no doubt. Makes a lot of sense.
View attachment 1332621
Click to expand...

RPF PREMIUM MEMBER
So one set of hobnails came in today and I just had to try my hand at making a Mystery Chunk. 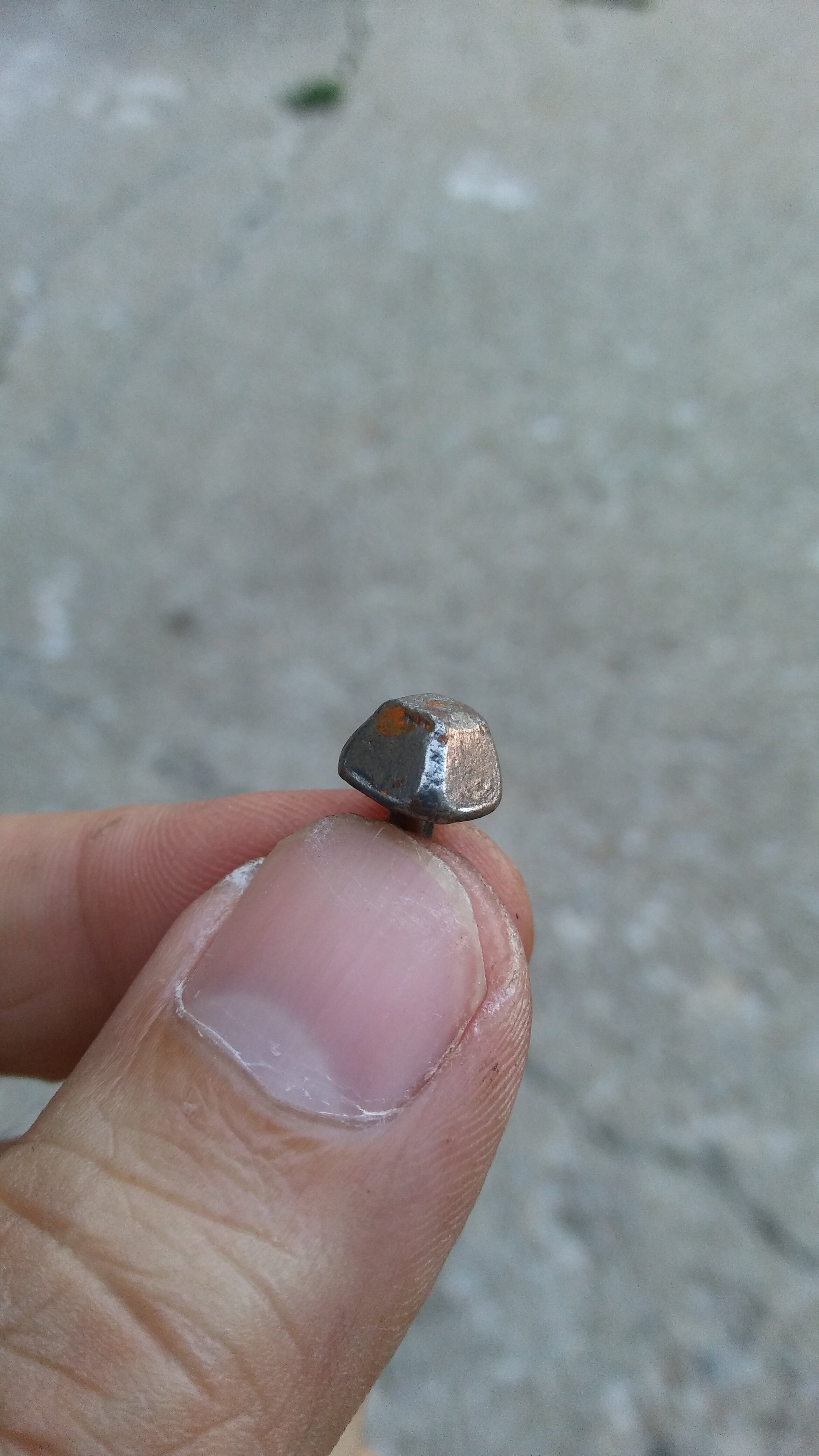 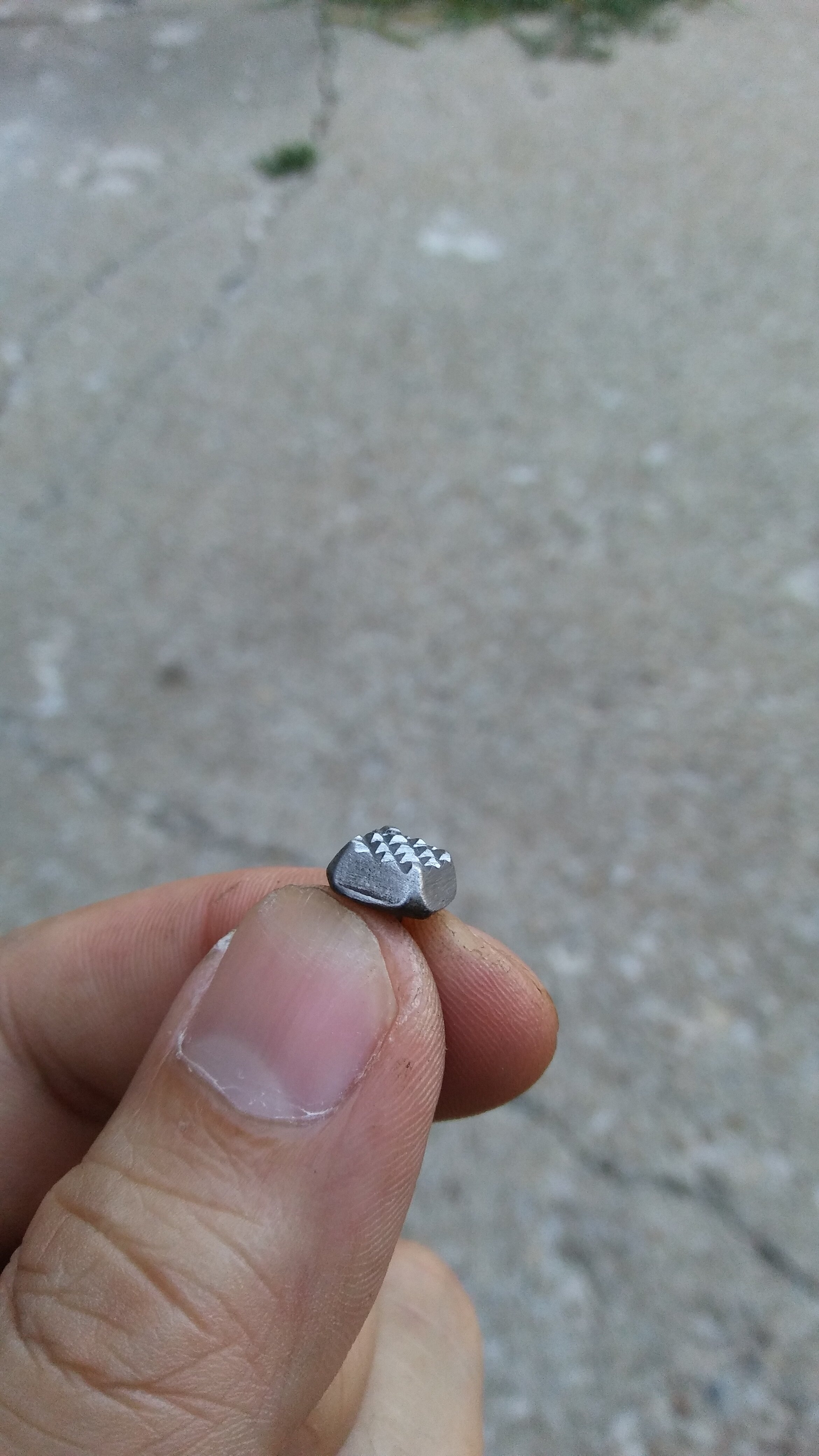 Now, keep in mind, the pictured hobnail are two different nails. I put the one in the "after" pic to work first out of excitement. It came together really quick: Sand the grime of time away from it, grind the top down a bit, and then checker it (4x4), before scruffing the tips.

One quick note is that these are unissued, WW2 vintage. Meaning these came at a time when each nail was hand made, so each hobnail is going to be slightly different from each other. The first pictured hobnail has these little ridges/lips along the bottom all the way around its base (cast in a mold or form, maybe?) while the one pictured under it only has them on two sides. Some have them on three sides, some have them on one; there some that have fuller, others that have smaller almost flush lips; some are fully square at the base, others are more rounded, and some others are almost completely round at its base.

Here are some pics of it on the Starkiller V2 for relative size comparison. Considering these are nails, I imagine to get them to fit in a hole that's true to size on the real deal for the motor wires, these would first have to be fitted with a plug of some kind, and then fitted into the hole in the pommel. 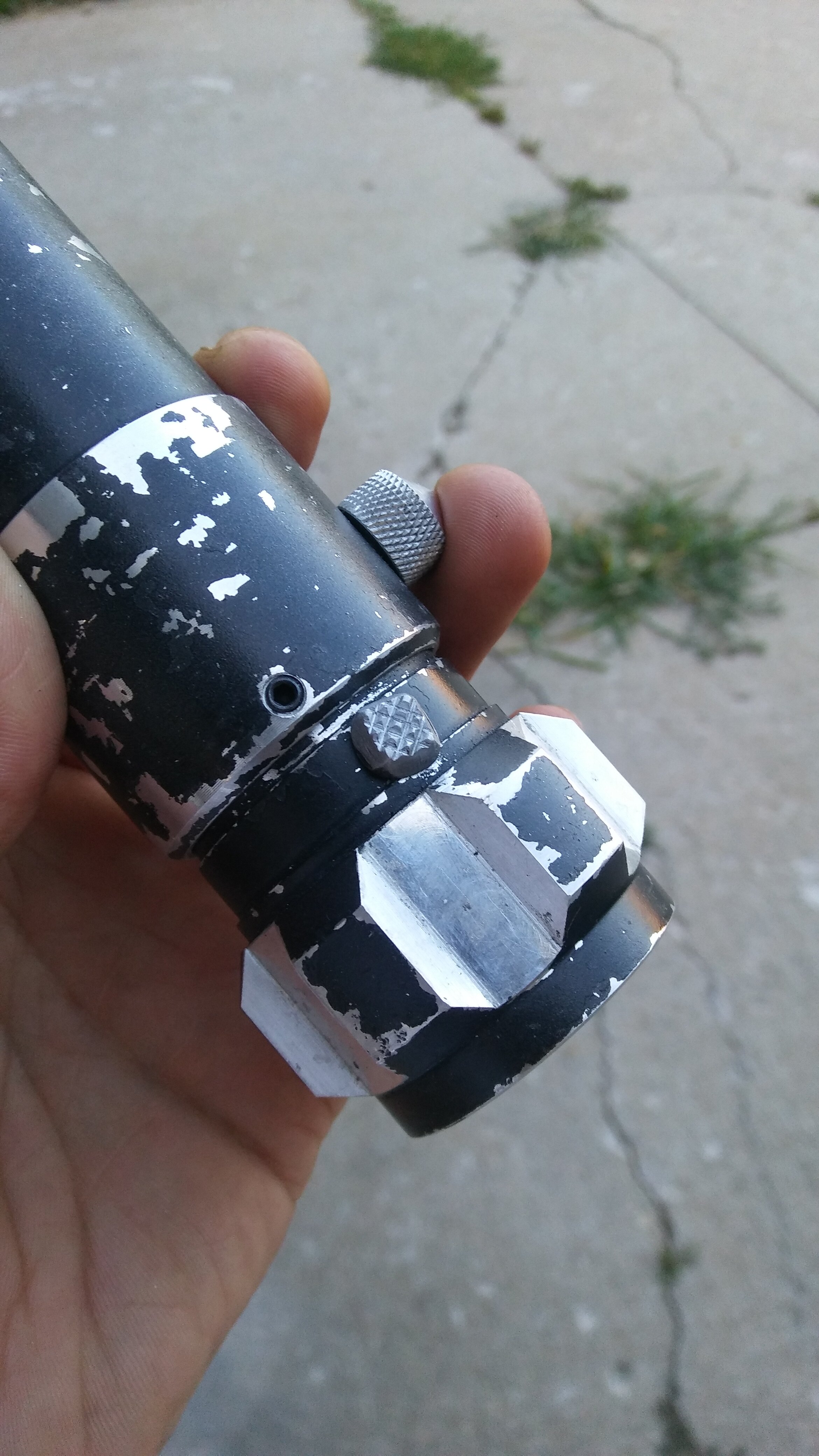 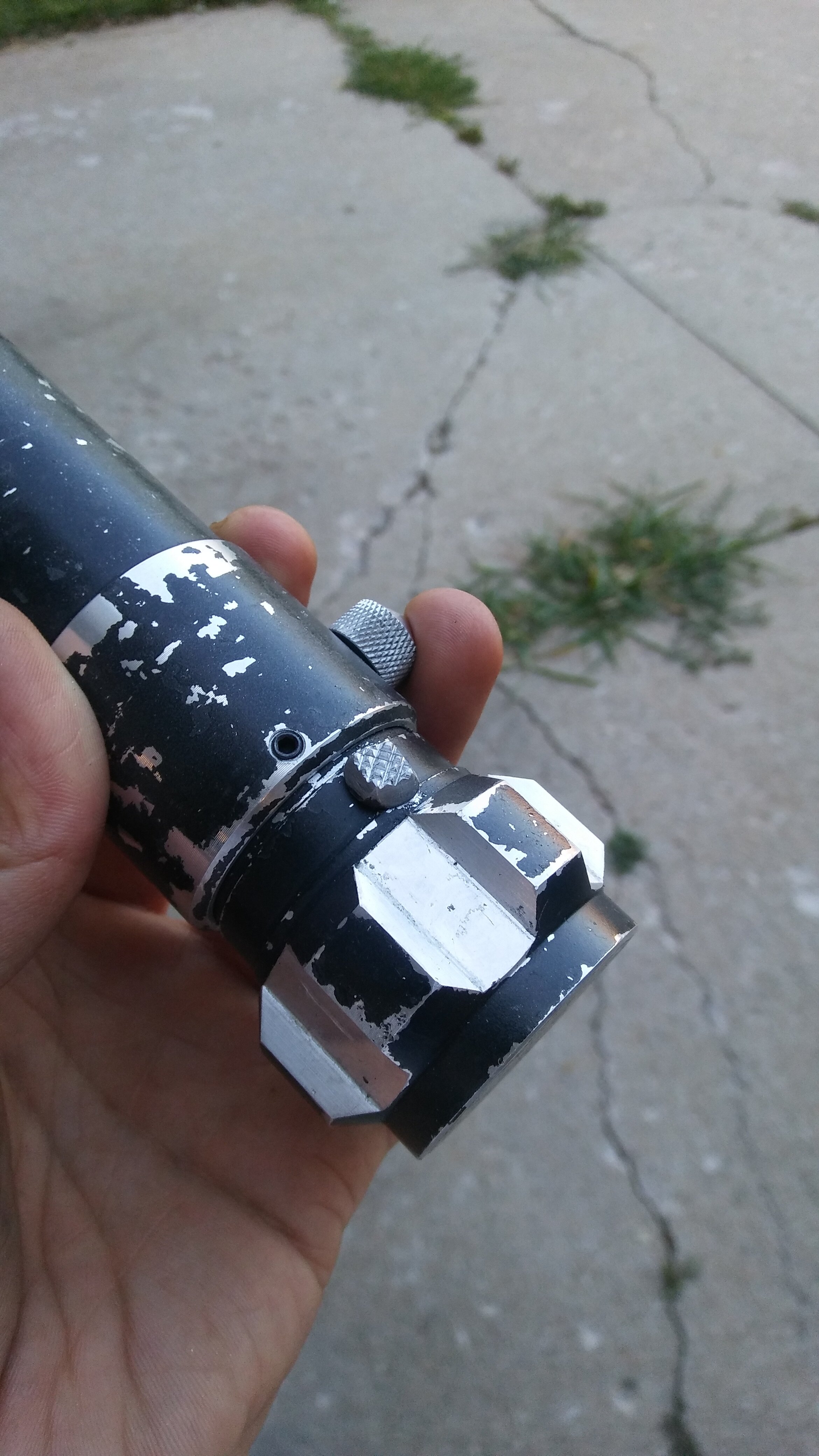 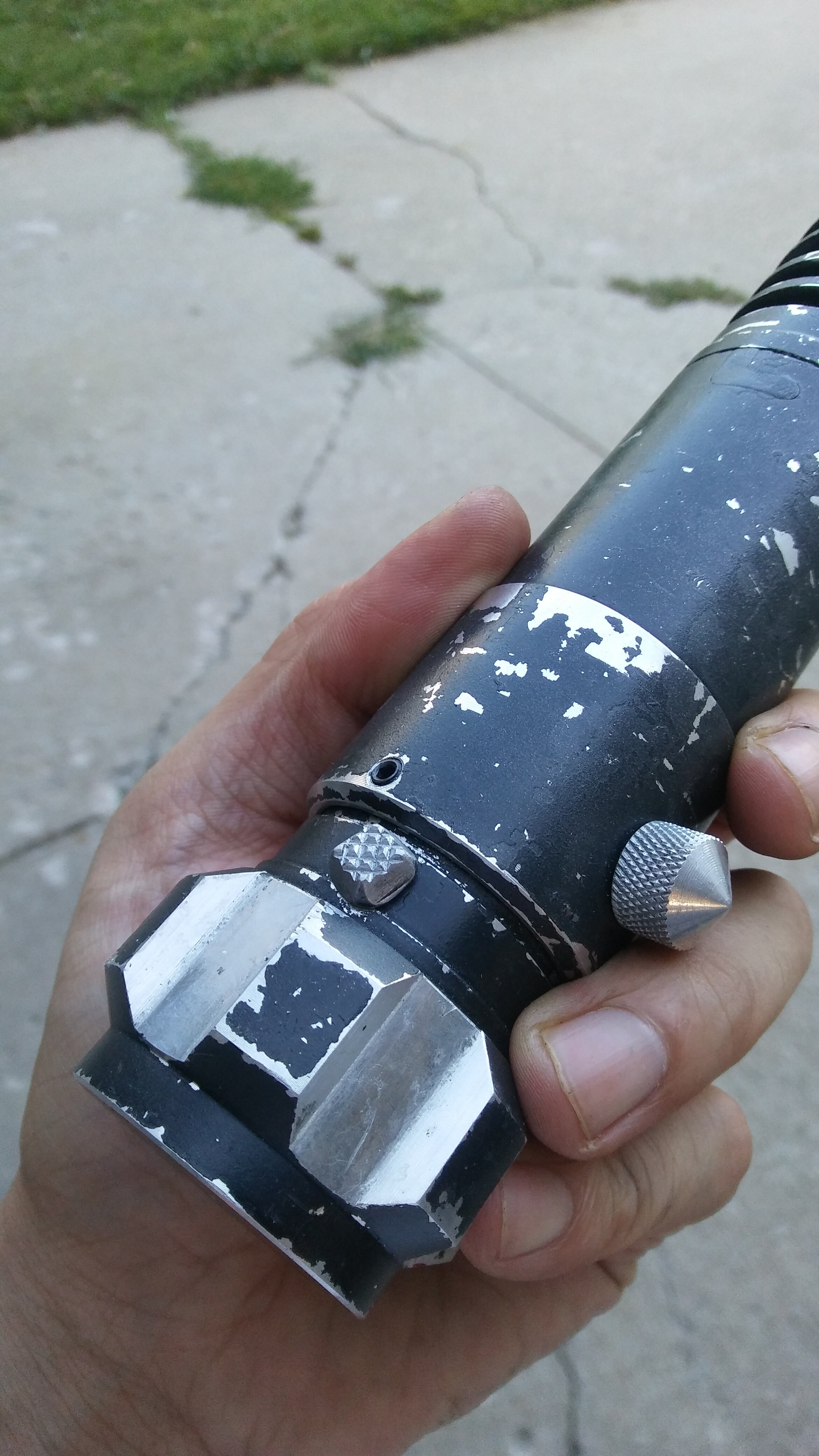 RPF PREMIUM MEMBER
how did you checker it?

I mean, found part wise I don't think they'd sculpt a part that they stuck in a hole, but your hobnail looks exactly like the part now!!!

I mean, found part wise I don't think they'd sculpt a part that they stuck in a hole, but your hobnail looks exactly like the part now!!!
Click to expand...

The ski/mountaineering hobnails haven't come in yet but they are pre-checkered and hobnails run the gamut in size, shape, and detail. It's just a matter of finding the right one (or in my case, altering it).

It wasn't anything difficult, I just marked the surface after grinding it down and used my jewelers saw to etch grooves before actually cutting the grooves with needle/jeweler's rasps. Super easy stuff, especially with the low carbon steel that these hobnails are. They're surprisingly soft.

This makes me wonder if they did actually use hobnails and the checkering was an added detail to make resin greeblies from, ala the RotJ bunker detonator, just to make it more "tech-y." Like the mystery sight-laser thing on the PKD blaster, perhaps it was a custom made part inspired or made by something they had on hand instead of something pre-fabricated as we see it now.

RPF PREMIUM MEMBER
I’m not going to go into detail yet.

It is not a mystery anymore. Recent findings. More to come. Please didn’t contact me about it.

This is a blown up image of the chunk from the item I am currently trying to obtain. This is all I’ll say right now.
Why?
1. trying to confirm after receipt.
2. Would like to make a lovely presentation with additional research based off the findings of the item.

RPF PREMIUM MEMBER
Bryan texting me a week or so ago:

RPF PREMIUM MEMBER
Well that certainly looks the part, I'll be excited to see the reveal!

That's the best picture I've seen of this part.

teecrooz said:
Bryan texting me a week or so ago:
View attachment 1336591
Click to expand...

Since we seem to be on the verge of finding the real part, do you think we will see some more detailed pics of the real saber?

RPF PREMIUM MEMBER
Have you seen the ones on top of the ROTJ bunker mines?

Never seen that before, that's great!

BRRogers said:
is a blown up image of the chunk from the i
Click to expand...

Is the circular section underneath the item a washer or part of it?

RPF PREMIUM MEMBER
that is still a mystery to us too!