Anyone else from here going there?

I'll be there Friday through Sunday.

This'll be my first LA CC. Anything in particular to look out for? Any panels to recommend?

RPF PREMIUM MEMBER
I also bought the full pass, defo be there Saturday and Sunday, Friday not sure.

I've been going since 2016 when it was called Comikaze and Stan Lee was always walking around chatting with people.

It's the perfect size in a way: large enough to have lots to do, but not crazy-crowded like LA Anime Expo and San Diego had got prior to Covid.

As far as what to recommend, I've noticed that different people go to Cons for different purposes, and our interests might be totally different.

I'm not interested in celebrity for-pay meet & greets, photo-ops, or signings, nor the celebrity panels you have to wait in line all day to see. I've done some work in the film industry and I've seen enough celebrities already.

I love the hard-science panels and I was happy to see some of those offered.

I'm a cosplayer, and hanging out with all the old friends in the cosplay community is a big part of Cons for me.

BTW about my own cosplay I tend to follow the panels each day, so Saturday I'll probably be Old Ben Kenobi and Sunday Dr John Hammond. It would be cool if you came up and said "hi", it's always great seeing RPF people in person.

We have a large local Indiana Jones club and we'll probably have a meetup Saturday or Sunday so I'll be Dr Henry Jones Senior for that.
Last edited: Dec 1, 2022

I love the hard-science panels and I was happy to see some of those offered.

I'm a cosplayer, and hanging out with all the old friends in the cosplay community is a big part of Cons for me.

BTW about my own cosplay I tend to follow the panels each day, so Saturday I'll probably be Old Ben Kenobi and Sunday Dr John Hammond. It would be cool if you came up and said "hi", it's always great seeing RPF people in person.

We have a large local Indiana Jones club and we'll probably have a meetup Saturday or Sunday so I'll be Dr Henry Jones Senior for that.
Click to expand...

I see that there's an "official" Marvel Cosplay Photo-Op gathering at 2PM on Saturday. I'll be there for that.

Is there any specific time or location you'll be at? Do you know of any other such gatherings?

Is there some site or forum - aside from LA Comic-Con's Facebook page - for cosplayers at LA Comic-Con?

At Salt Lake CC they had a "Captain America" photo-op and I missed it as I only heard about it after it was long over.

RPF PREMIUM MEMBER
Sorry I didn't really go online much till the Con was over, and I just now am seeing your post.

We did the Indiana Jones meetup at noon Sunday. That's been our default day-and-time for several years due to one of the mainstay Indys having to always work on Saturday.

I noticed as LACC got closer they started adding more cosplay meetups on the Programming part of the App. None of us got round to trying to add the Indy meetup unfortunately. I don't know how you go about doing that.

I really like FanX Salt Lake's specific cosplay Facebook page. When I attended FanX last year I had never even been to Utah before, and that FB page was super helpful and made me feel like part of the community before I arrived.

I was there on Saturday. Really felt like it was overcrowded that day. Managed to get a few autographs and some art stuff from artist alley though so I felt that was worth it. Way too many people.

RPF PREMIUM MEMBER
Interesting, I was there Saturday and it didn't seem overly crowded to me. It seemed about the same as the pre-Covid ones, as best I recall.

LA Anime Expo is held at the same venue (LA Convention Center) and the pre-Covid ones seemed the most-crowded Conventions I'd been to.

(I never attended the pre-Covid SDCC which people say is the most-crowded of any Con.)

Well, sorry I missed you. I saw several Indys running around and but no Dr. Jones Seniors. I was at the Con late in the afternoon on Friday and pretty much just to "get the lay of the land." Saturday I was there early enough and pretty much spent the entire day hanging out in the lobby to take it all in. I was there for the Marvel group photo op and am now in the hunt for images of that. Sunday I was back and attended to panels and spent the rest of the day again out in the lobby.

As to crowd size? Yeah, hardly anyone there on that cold and rainy Friday. Saturday was nice 'n sunny and much better attended. For me it was closer to what a WonderCon has been like in my experience. Nowhere near as massively packed as a San Diego Comic-Con. Sunday was far more mellow and the crowd size was mid-point between Friday's low and Saturday's high.

I had a good time and will definitely be back!

Saturday I was Old Ben Kenobi. (Yes I know I'm supposed to have a floor-length tunic but I've not quite brought myself to that yet.) 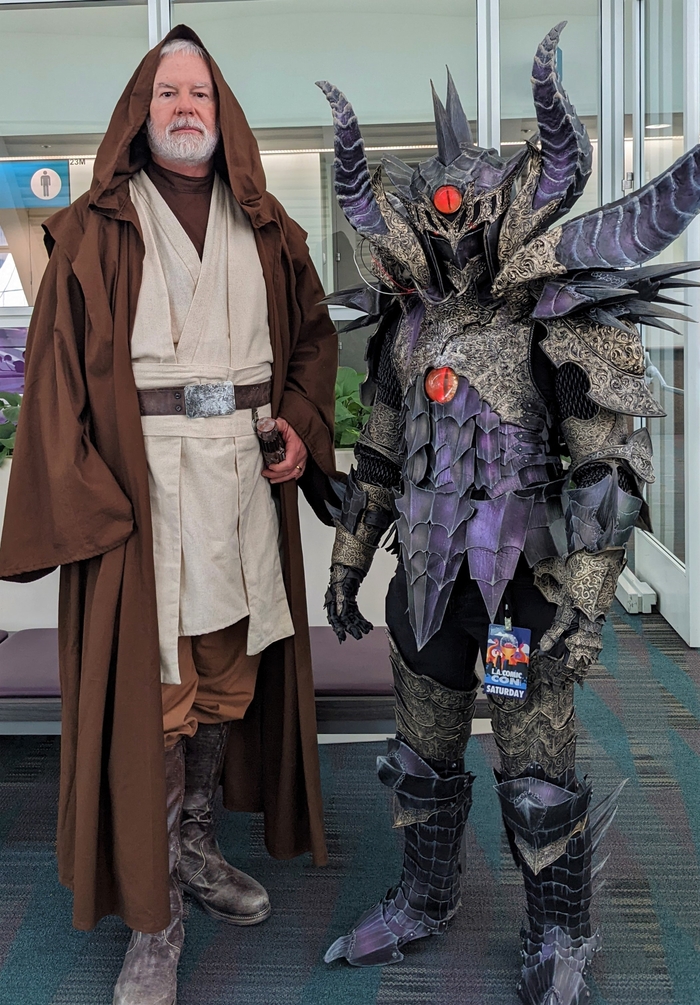 The one at SDCC this year was much bigger as you might expect, with Indys from Germany etc. 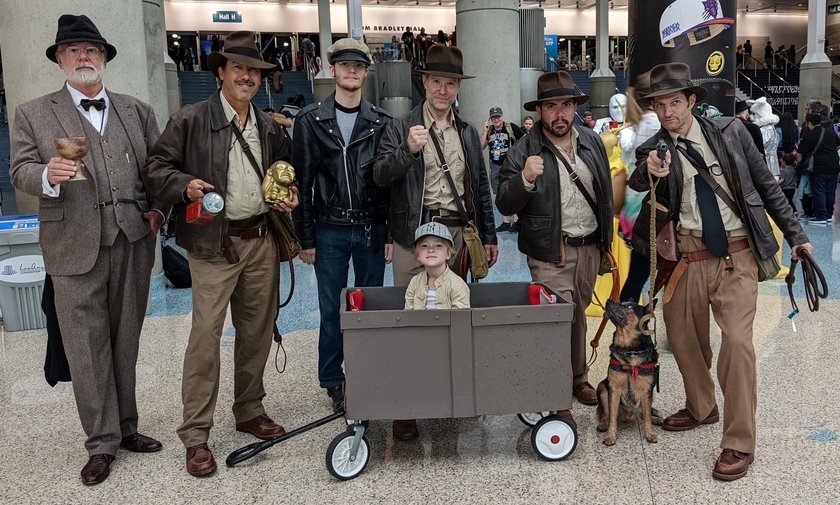 What's surprising to me is that only a month ago we had a great turnout of Indys for one of our California Jones gatherings.

This group was born during the Covid lockdown when we really needed to just get together and talk Indy stuff and crack some whips and such.

(Though this gathering was on Saturday we're doing the FFF (Ford Finger Friday) pose. 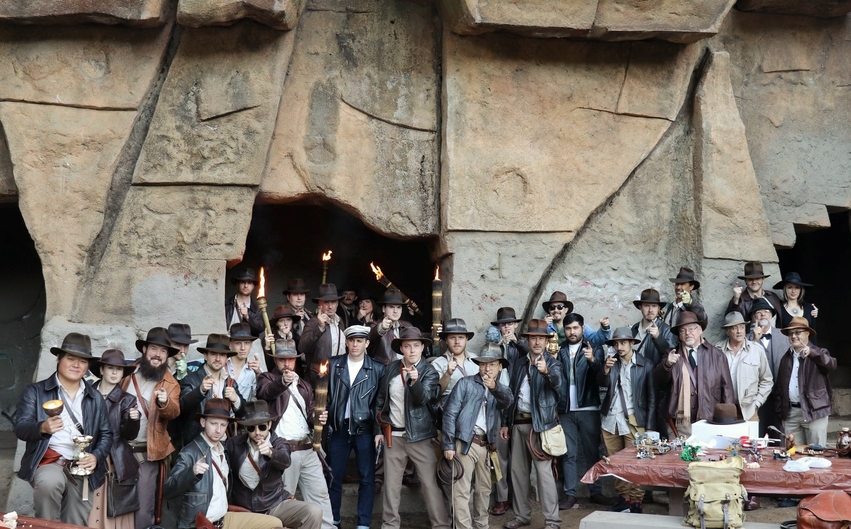 It really was great to see how many Indys there were this year. I think it definitely will increase the closer we get to the new movie. All the same, maybe it was just me, feeling like it was crowded as I didn't eat anything all day to avoid being gouged on food prices.

RPF PREMIUM MEMBER
I didn't eat anything either, due to the long queues at every food place I saw.

It's one of the reasons I like the Anaheim Convention Center: there's that road that goes out in front which at WonderCon, and this year at Star Wars Celebration, which functions as an annexe, being within the boundaries of the event, with a large number of food trucks.

Likewise that high wide patio at the Long Beach Convention Center where food trucks can park, and also people can park their film/television vehicles.

The best Convention Center I've seen for people's flim/television vehicles has been Phoenix. There were three Ghostbusters cars, for example.

At the LA Convention Center there's really no outside place for them, though one year at LA Anime Expo there was a German tank parked in front. This year at LACC there was a place in the Hall where they had three or four vehicles parked.

SickleClaw said:
It really was great to see how many Indys there were this year. I think it definitely will increase the closer we get to the new movie.
Click to expand...

Yes and there's one guy in the California Jones club who has gone all-out putting together a screen-accurate Indy 5 cosplay.

In the large meetup photo I posted above, in front of the fake rock formation, the Indy in the very middle of the cave opening, directly under the middle torch, is the Indy 5 fellow. You'll note his bag is slung on the opposite side.

As Indy people know, Ford's costume is different in each Indiana Jones film, a different hat and a different jacket at the very least.

In the small LA Comic Con Indy meetup I posted the photo of above, the Indy to centre is in full Temple of Doom costume and the Indy at right is in full Last Crusade costume (Indy wears a necktie with his outfit).

Also, there was no idiocy about getting into the Con at Salt Lake. No metal detectors nor over zealous security idiots. At both Long Beach and LA Comic Cons there were both. At Long Beach they flat out refused my bringing in the Nerf fun .45 despite its being plastic and having the orange ring muzzle. They were within a hair's breadth of refusing the shield as well. At LACC I didn't bother packing the pistol nor the boot knife and had to play it coy with the shield. It made it through the metal detector stand but then a supervisor swooped in and said I'd have to check it. I didn't argue with him as it'd be pointless but I also knew that the "coat / baggage check" office was deep inside the Convention Center itself so once I'd left the screening checkpoint I'd be beyond the guy's reach. That was on Saturday. On Sunday they even questioned my helmet as it's genuine issue steel. Then, they sent me over to the "weapons check" table and the guy there just asked if I had any props - i.e. guns or swords or whathaveyou - as I didn't, he just sent me on. Yeah, not at all consistent, not at all reasonable, and not at all secure either.

But, that did keep me from heading out of the Convention Hall for any grub to eat. Which meant that on Saturday at least, I didn't get to dive in on the bacon wrapped hotdog vendors out front of the South Hall entrance. Their number was impressive. It wasn't just one or two or three such vendors but at least a dozen or two. Seriously, they were there in droves and formed several lines on the plaza just outside the doors that Saturday.

I hit up the food trucks on the Convention Hall level outside and the selection was eclectic. The lines for 'em weren't that bad. The seating however? Yeah, Saturday it was almost a competitive sport to snag a chair. Friday, with almost no one there by the time I pulled in, it was direct thing. Sunday I thought I'd avoid the food trucks as they were outside and thus in drizzle and cold. My mistake. I would up buying a $20 pizza - well, $16 or so $3 or so for the Coke and thus about $20 or so with the taxes. The best I could say about the Convention Center foodcourt pizza was that... I've had worse.

But hell, that's all part of the experience, right?