I'm new to the RPF (literally joined today) but i'm obsessed with the prop of the Loki Mask from the 1997 movie "The Mask" starring Jim Carrey and Cameron Diaz. I have collected many replicas over the years from the likes of Ebay, Etsy, Reelart and most recently Instagram. The prop replicas that I have acquired from said instagram page are by far the best ive seen currently and also the cheapest. But there is one thing I am missing and desiring for my collection...

An actual Loki mask made of wood with a metal nose piece.

Now i've seen other makers make a wooden Loki mask which do look amazing however they do not look like the original piece. Thats why I am looking for information on whether there is anyone out there who could look at say, a resin replica of the mask, and be able to carve an exact replica into wood (size shape and detail) along with also casting the metal nose exactly like the prop.

This could even be a two person job, an excellent carpenter and blacksmith would be required or the multi talents of one individual?

Ive seen alot of prop makers strive to make replicas exactly as they would be in real life (for example a fantasy gun modelled off a real gun, therefore the maker would acquire the actual make of gun and build around it, so that the replica has the exact weight as to what it would be like in the movie) and I feel the same way about this mask.

If there is someone out there that could help me out please let me know!

RPF PREMIUM MEMBER
to be fair i dont think the screen used one was made out of wood and metal?

however i know exactly what youre saying... having a prop replica made out of the material it was INTENDED to be made out of, regardless of how they actually did it for the film is the goal.

the tertiary detail on the screen used mask is vast... id be interested to know if carving this mask out of a solid piece of wood to the level of detail thats required, at the proper scale is even feasible at a reasonable price?

RPF PREMIUM MEMBER
This is a thing I want to make one day, didn't make so much search for now, because it's not very easy to get reference pictures, I only have propshop sales and screenshots for now.
But I want to make a loki mask from wood and metal, also a arumbaya statue from tintin btw.*
One problem is the L on the front metal piece, is is relief carving, deep, not deep, flat it seems several versions exist, my guess is the round shape is small piece and there is a hole filled with it, could explain the depth variation.
Other issue, I would say main issue, is wood grain on the mask is not very realistic on some ways it can still be carved, as I did for some potter wands, not realistic too, but one other ways the mask is also realistic as there is a knot on one side, to be a perfect match it would require the same knot at same place, or at least a knot possible to use and get identical result once carved.
I did same for my potter wand, used existing knots on handle.
Last thing is weathering, the mask seem to have brown, pinkinsh and green shades, not realistic, I wanted to make one, but putting it several years outside to get a natural patina (and rust), this could be done artificially, maybe, not sure, coloring can be done, but it won't get same aspect as a mask spending years under water.

I wanted to buy a prod cast replica, but didn't find it, then I moved to other things, but the folder is still somewhere in my computer.
Last edited: Oct 5, 2020

RPF PREMIUM MEMBER
Infinity Collection Studios is offering this hand carved wood one... only 50 being made. 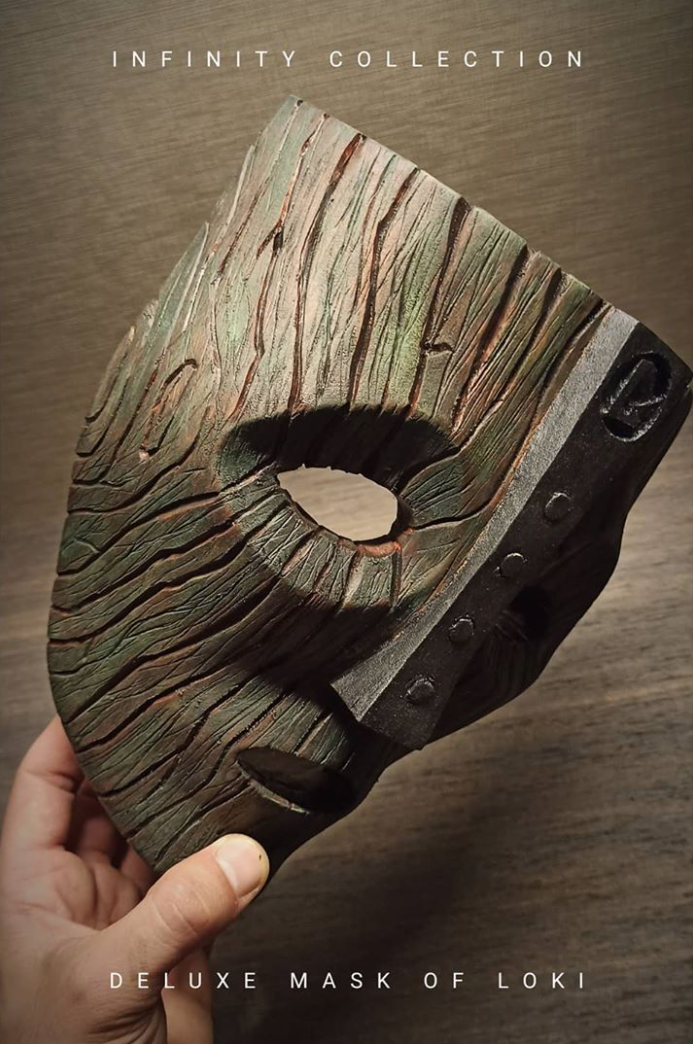 RPF PREMIUM MEMBER
Do you have a pic of the front or a link to the offer?

It's still early days on their prototype but they do a good job of consistent updates.

Their jumanji board is stunning.

RPF PREMIUM MEMBER
Thanks...yes they make great pieces..but I´m not really an expert for the other props they make.And how accurate they really are.

Hope the Lokimask will be great at the end.

Did they said something about the price of the mask?

RPF PREMIUM MEMBER
Yes...the overall look is good...but the round part with the L looks not so detailed like the original.Also all the very small details and lines from the real prop.I know thats impossible to copy in real wood.But I would prefer a more accurate look made from fiberglass.

Kroenen77 said:
Yes...the overall look is good...but the round part with the L looks not so detailed like the original.Also all the very small details and lines from the real prop.I know thats impossible to copy in real wood.But I would prefer a more accurate look made from fiberglass.
Click to expand...

True I agree... But I won't lie, holding a mask carved out of a solid piece of wood is very appealing.

What do you think about ReelFX one?

jholt said:
True I agree... But I won't lie, holding a mask carved out of a solid piece of wood is very appealing.

What do you think about ReelFX one?
Click to expand...

Yes that another point.Thats why I love my windlass Ironman props...not 100% accurate..but when you touch it its another level of quality like all this new chinese IM props together.

Kroenen77 said:
Yes that another point.Thats why I love my windlass Ironman props...not 100% accurate..but when you touch it its another level of quality like all this new chinese IM props together.

Yeah sorry the ReelArt one.

RPF PREMIUM MEMBER
To Reelart: If he really had a screenused mask to make that he should show the source and proof that it was really screenused.

A
Looking for a Loki mask from "The Mask" replica.

What material for masks?