I am currently in the process of taking my first 3D Printed Logan's Run DS flame pistol and considering modifying the
flame suppressor to be machined aluminum so that it will handle the heat from the "TORCH LIKE" flame it produces.
The video shows the first test without the aluminum suppressor in place, only to test the flame output before I machine one.
This version is the only "flame producing" 3D printed Logan's Run prop I have seen.
Since the test seemed to be a success, I will start the process of getting the aluminum one machined.
I only had a small load of CC and water, so I got one good blast and a desent second one.
Only a proof of concept (kind of startled me).
The only working 3D printed version I know of and may be the last. 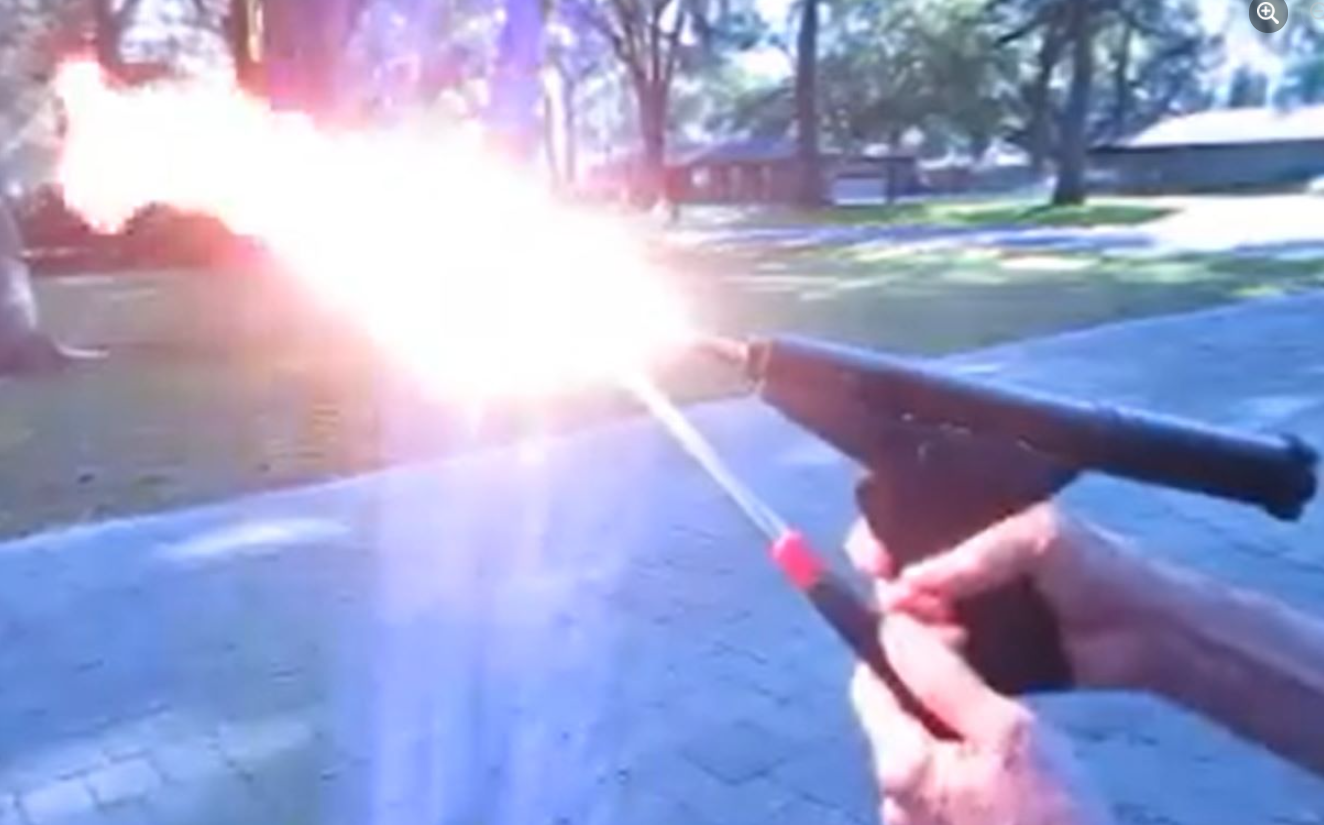 RPF PREMIUM MEMBER
Very cool. I sell a machined aluminum kit of this blaster and was wondering if it could be retrofitted with your innerds.

I did a second video with a bit more CC and Water (for another test of the hand torch) and more detail about how this prop originally functioned.
(Pleas note: I said calcium carbonate by accident, I know it is Calcium Carbide).

Did another test of the firing mech. and modified the gas output needle valve and venturi (air/gas) mixing area.
During the test however I lost a couple shots because the lighter flame failed me.
Then would have been great as well due to how it already is functioning.
I still have to machine an aluminum flame suppressor/deflector to take the heat developed.
Due to the amount of pressure and heat developed there is still the need for metal internal parts which are still
under development and very different then the "traditional" means.
In this design, the Venturi/Mixing area had to be moved forward of the handle due to the redesign and I needed the room
in that location. It seems to work ok.
I think the original design is much easier then what I have designed, but I wanted to 3D print (PLA) most of the prop
to see if it could be done and I needed the challenge.
It also makes kind of a loud "crack" torch sound just as it is ignited.
Have been asked if this will be made for sale, but it is not likely at this time due to the design aspects, nature of it's function and
safety concerns.
P.S. Looking to color the flame with "contaminants" to get that green tint to it.
A form of copper - boric acid - BORAX, etc. have been suggested but getting it introduced (ion mix) is the issue without
damaging the valve components.

Looks great, so far. Any details on the valve assembly? I understand your caution in putting this in other's hands. Acetylene can be nasty stuff, especially when in your hand in a plastic enclosure.

Here is a video I just made tonight testing the flame ignition without a glow plug or holding a lighter.
.
The rest of the design (body and internals) seems to be holding true to form.
.
It was once said a 3D printed version could not be made to fire flame.
I think I am getting close with this one of a kind version.
This is getting to be more like a firing HERO prop.
.
YOUTUBE Video Link:
www.youtube.com/watch?v=nuGTc0U-vgw
Last edited: Jul 22, 2021

This morning I started up my Lathe and machined an Aluminum suppressor for the front flame deflector of my working Logan's Run 3D Printed working hero flame pistol.
I still have to do the 2 end caps and fin and paint black.
.
.
YOUTUBE Video Link:
www.youtube.com/watch?v=H4Roiviettc
Last edited: Jul 22, 2021

Still have to add the fin and the simulated "glow plug", then paint.
Machined aluminum suppressor/deflector. 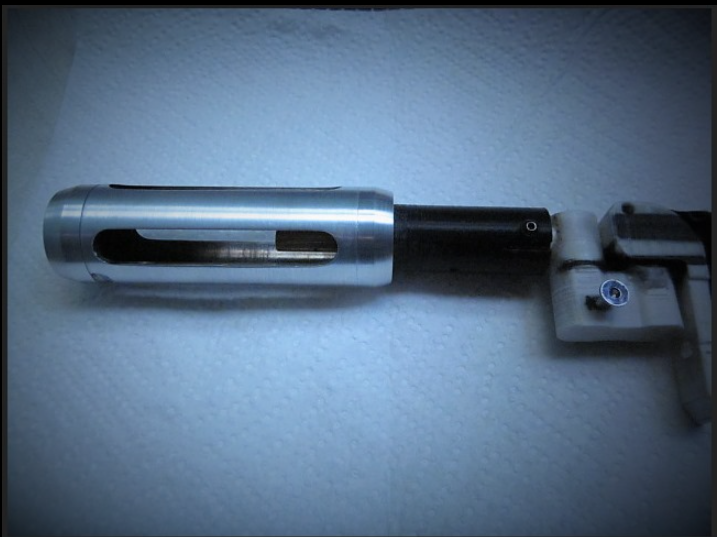 Will be doing a test firing tomorrow with the aluminum deflector on it. 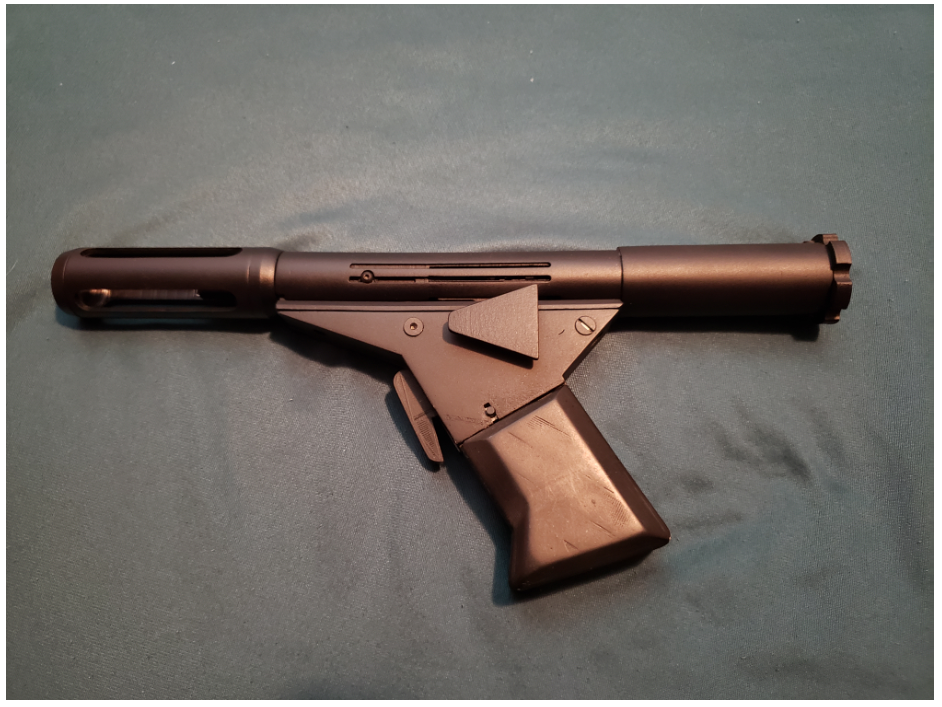 Just a simple test firing of the "Flamer" DS Sandman flame canon.
This was done outside but I did fire it in the house and it has a pretty cool sound to it.
.
Since my design does not have the large filter area like the original, I have no where to place the large quantity of solder flux in the path of the acetylene gas to achieve a green flash effect.
I think the series did not use the "green" flame for there flame gun. 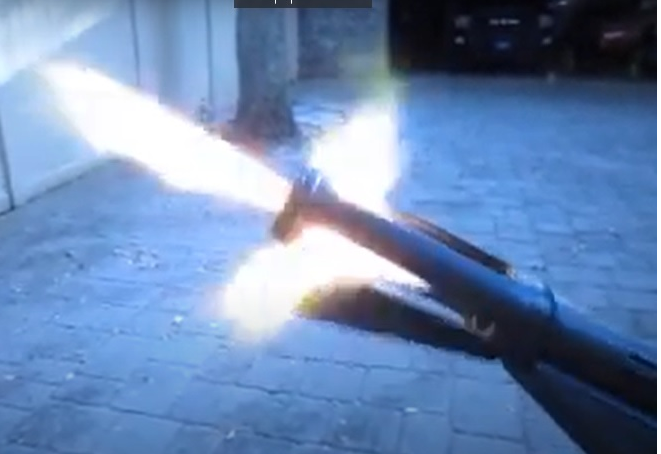 AMAZING!!! is it possible to order a working version from you?

Please message me at darrenwpeters@gmail.com

I had a bit of free time this afternoon to "fire" the pistol and when I do I always take a video so I can watch it function.
Sometimes the action happens so quickly I don't get to see the full effect.
So here is the most recent firing of the HERO prop, DS Sandman "Flamer" Pistol.
This thing is a kick in the a$$ to fire.
NOTE: This will not be recreated for sale.
As many have read from the original makers, there are a few things to consider when setting one of these up to be fired.
The original one was all metal and was created to produce a functional, live special effect and had many issues when doing so.
The original replica makers may still be available to create there version of the prop for sale, not sure.
.
This was just a challenge for me to see if it could indeed be done in this fashion (mostly 3D Printed) to create a flame during firing and I think for what it is, it came out better then I could have hoped it would.
It was to be considered a "SPECIAL EFFECT" not a flame thrower.
Not sure who's idea this was in the beginning (putting pencil to paper) but it was a really unique prop for it's time and
now this totally reimagined version here.

The only thing similar to the original DS weapon is the "general look" of the exterior of the prop, the aluminum suppressor/deflector nozzle and the use of the miners mix "CC and Water".
The internal trigger and valving, acetylene chamber and electronics is completely unique to this prop and was specifically designed in such a way that only "fits" in the interior of this 3D Printed Body.
I think looking at the interior design drawings of the original prop, it would be easier to reproduce then this version of the prop.
My goal was to see if I could do it by 3D Printing as much of it as I could and this is the result.
The original version takes up way less room and is made of machined metal and can produce a more forceful "output" as many videos show.
I was going for mostly effect then being robust.
'
It seems that this may have been the only hand held weapon that used flame output has an added "practical effect" (besides a flamethrower).
And now many years later, another "unique" version.
I wonder who thought of the flame as a prop "feature"?
An energy discharge canon.
I found this on line:
.
In the novel the DS gun (or Deep Sleep gun) was a six shot revolver that fired different types of ammunition. Ripper, Nitro, Tangler, Vapour, Needler, Homer.
In the film the gun was some sort of energy beam weapon with just one fire mode which killed runners. It shot a green flame from the muzzle, which was a practical effect.
.

RPF PREMIUM MEMBER
Very nice work. I'm with Nicksdad, I wonder if it would fit/work in his kit?
Cheers,
Kevin

Did another test firing earlier.
Same prop, same set up. 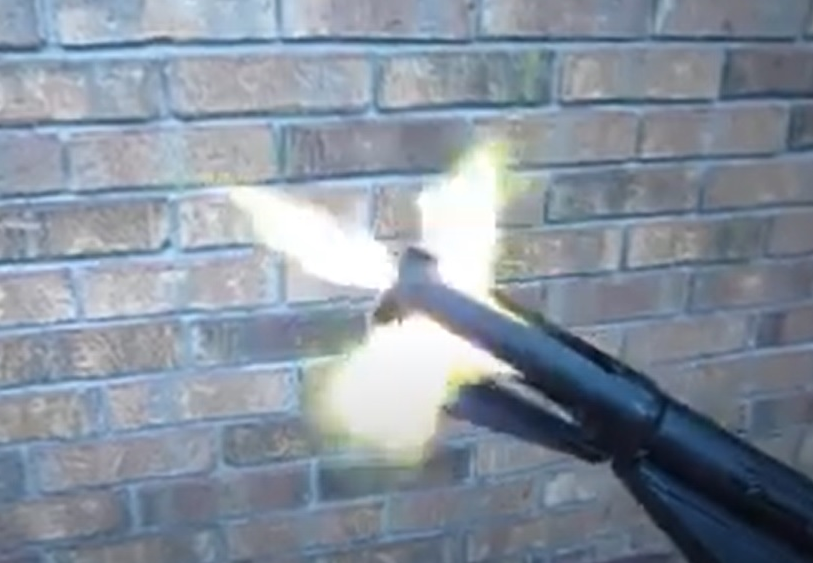 I am currently working to add a means to get the Acetylene "blueish/yellow" flame to burn more green color.
I did a multiple shot test and it seems that the technique works.
I developed a small leak in the tube since it was a bit of a rush to take a video.

Here are 4 still shots of the flame using Acetylene and my "coloring" system..
. 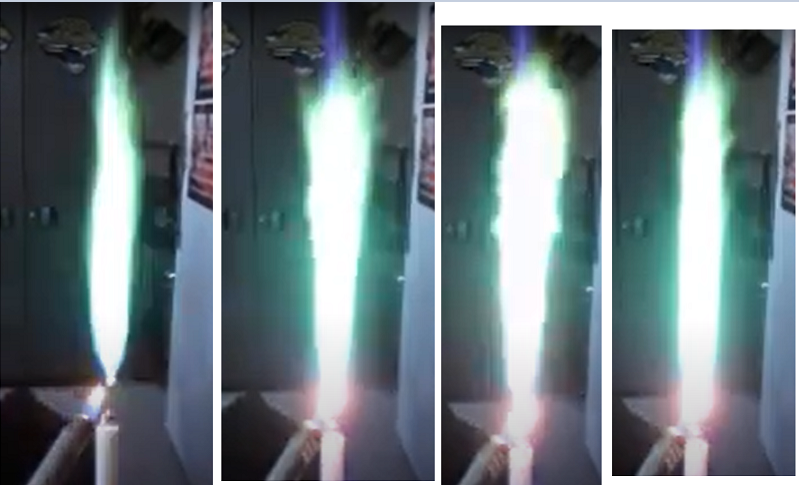 This glass vial will be located in the grip, to be used to add the chemical solution for vapor colorizing the Flame of my prop to get a green tint.
The electronics is my solution to igniting the flame other then the glow plug. It produces an arc at the tip.
Very different then the original and is at the prototyping stage.
. 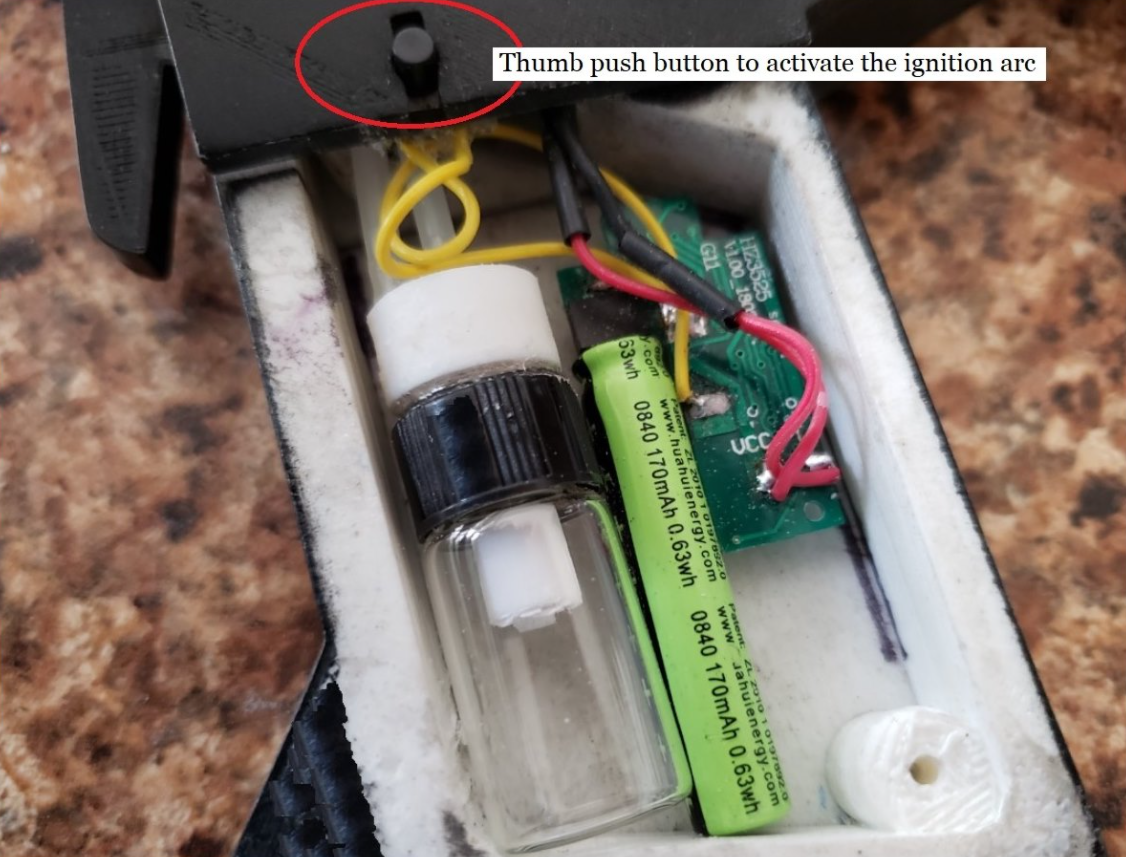 RPF PREMIUM MEMBER
This is such a cool build. It makes me want to trick out my Nicksdad kit.

I didn't have a way to video this current test firing, but instead used the CCTV camera in the garage. I wanted to see how it would look and function with the added gas transfer set up that will be added to the grip area of the pistol.
This is the result of the flame output.
Normally it would be ignited using the ARC ignition and not a separate lighter.
. 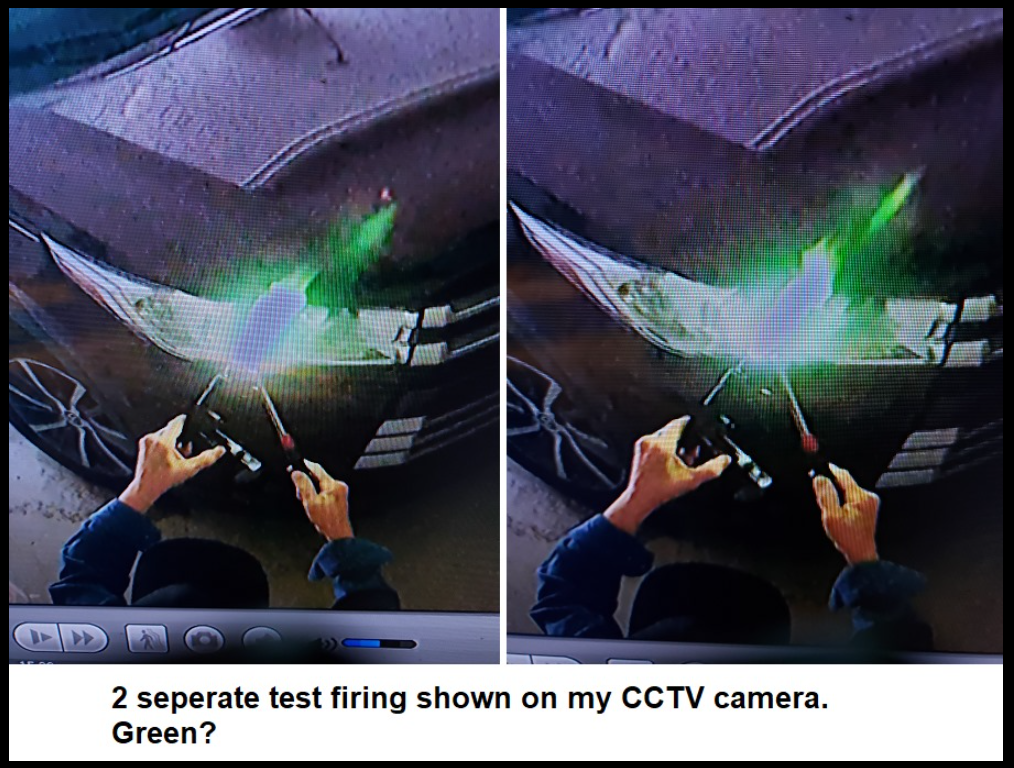