RPF PREMIUM MEMBER
Here’s my set of PoopaPapaPalps V3s with my vadermania V3 in the middle.

Dewy said:
Here’s my set of PoopaPapaPalps V3s with my vadermania V3 in the middle.

I wasn't aware you had a Vadermania scanned replica too, Dewy. That is too cool.

For the latest run of these hilts, I've slightly changed my method of boring out the interiors of the V2's. I'm leaving a little bit of meat around the further end of the cavity in the clamp section. As I have stated before, I'm always tinkering with these and testing/feeling out the correct method for cutting the hilts down.

I'm dealing with semantics here, but B. Alinger says specifically that inside the V2 there is a "chamber" for the motor. Implying there is a clearly distinct and visible area where the motor assembly would've been housed. Going back to the Jon Bunker diagram, he specifically remembers the rough silhouette of the OWK stunts, so I give a lot of credibility to the motor assembly set-up he's got laid out in there. Particularly, the paper shims that helped hold it in place.

From Mouse Vader thread on his Graflex stunt build, having paper shims in a hollow tube isn't going to cut it. It would work given the tolerance of the inside of the V2, however. As I have been machining my hilts currently, I bore out a cavity matching the width of the flange for the pommel, and looking inside of these, I'm not confident in saying that it by itself is a distinct "chamber" for the motor, nor paper shims being enough to pressure-fit the motor into the cavity. For my own in my collection, my motorised stunt has a cut down PVC tube to hold it in place. Currently, my method doesn't satisfy the description provided both by the man responsible for rigging the OWK stunt, and the man who currently owns the OWK stunt. However, leaving some wall thickness inside does.

This current run going forward, I'll be machining the interior of the V2 like this.

It's all theoretical and speculative (until confirmed otherwise) for right now. It's all a part of finding out what would make people do and say the things that have been about the prop(s).

I do feel I'm on the right side of the track though.

RPF PREMIUM MEMBER
I recently bought some new kit to help with machining the interior of these hilts, as scottjua says in DaveP research thread, that insides of the V2 are more bored out that what I could accomplish with what I had.

In an never-ending quest to get as close as I can to the original production-made hilts, I went and got myself a new boring bar to help achieve this in my cast hilts. Finding something that fits a bench lathe and is long and sturdy enough to do this was a bit more of a challenge than I initially anticipated. I was looking for bars that were 10 inches/~25 cm long but there wasn't anything that came in a 1/2" size for any of my tool post attachments, unless I was willing to spend $200+ for it.

I've been making due with an 8 inch/~20 cm boring bar instead and it does pretty well. The longer these things are and the further it bores into the piece, the more it gets pushed by the friction of the material, making it cut at a gradual incline. Really tricky cutting the internals when I can't see what and how much I'm cutting. I've been slowly feeling it out as I've been doing it; taking material off incrementally, pulling out the boring bar, clean up the chips to see my cut then adjust to take more off, repeat. Takes forever just to do roughly two more inches into the grenade.

It doesn't go as deep as the current CNC replica offerings, mine currently goes about halfway up into the grenade section. I'm also leaving some more meat in the grenade as well, as I'm not confident in my precision machining abilities on top of the strength of the cast metal if I shave the internal walls too thin.

This is what's taking so long with this current run, so I must apologize for that. If this works out, I'll be doing this for all my hilts on the run and will be updating the run thread soon enough as soon as I get the parts fully machined.
Last edited: Sep 7, 2021

RPF PREMIUM MEMBER
So, I'm putting this out there to anyone that might have any input for this, but I recently acquired some pure a356.2 casting aluminium and rather than the segmented ingots the photos on the site showed, I received this instead:

It's for industrial use. It's near 30 inches longs, 4 inches wide, and near 3 inches thick, and weighs close to 45 pounds. What would I need to cut this into smaller pieces or is this just too large? I have hand saws, a jigsaw, and a circular saw but I don't think those are viable options with something like this. I already have this and would rather just use it if I could. Any ideas, RPF?

RPF PREMIUM MEMBER
You would really need a portable band saw. A hack saw will do it, but the fatigue from cutting one piece would be palpable, or in your case palpsable.

RPF PREMIUM MEMBER
Brian get yourself a Milwaukee deep cut portable band saw from the big box store and a box of 14tpi blades. Aluminum doesn’t like to be cut but if you keep it cool it’ll be ok.. use wd-40 to *lightly* lubricate the aluminum if need be

Best tool EVER and can handle this job

You would really need a portable band saw. A hack saw will do it, but the fatigue from cutting one piece would be palpable.
Click to expand...

RPF PREMIUM MEMBER
I swear by Milwaukee portaband or the dewalt

This is the one I use 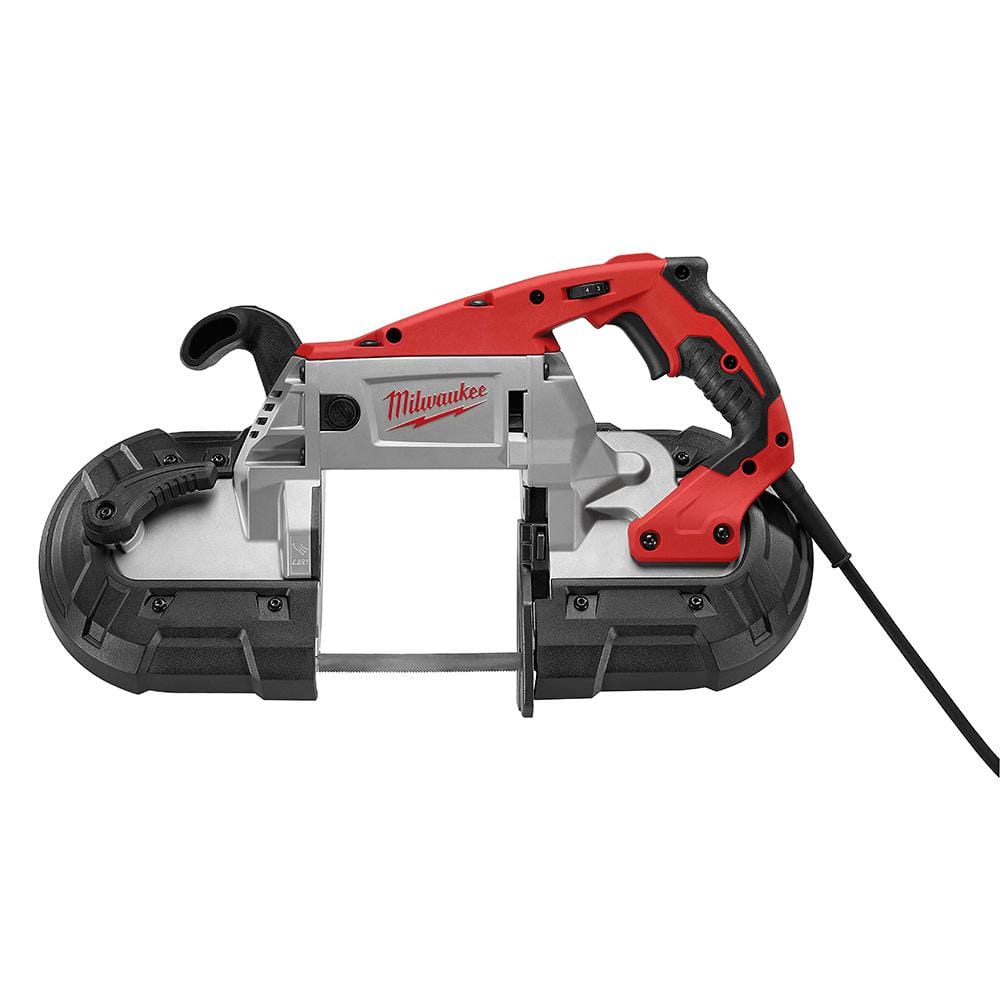 But really want this one.. 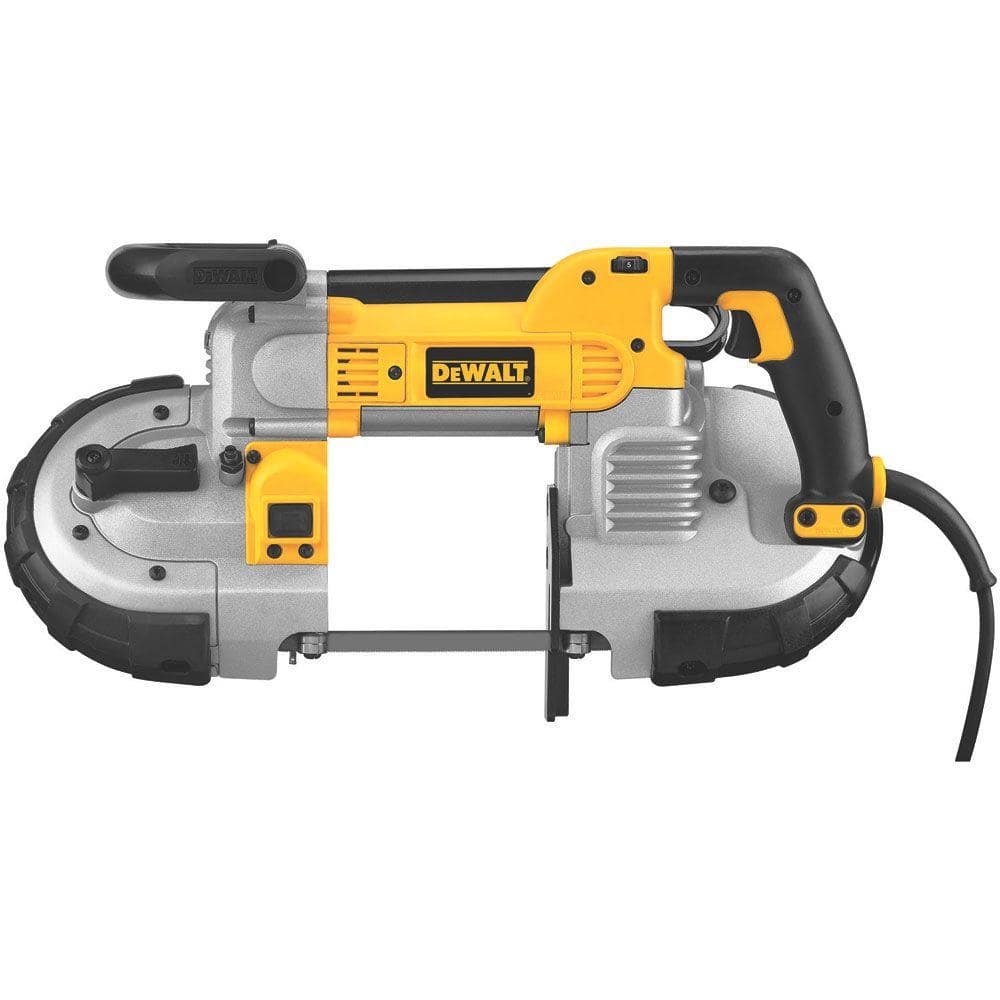 The DEWALT DWM120 Deep Cut Band Saw is built tough with a 10 Amp motor to withstand any jobsite application. This saw has a 5 in. deep cut capacity for rectangular stock and 5 in. x 4-3/4 in. for round.
www.homedepot.com

RPF PREMIUM MEMBER
I’ve always had blade tracking/ tension issues with the dewalt and the adjustable blade table/fence uses a hex key to adjust which is a pain on the jobsite.

I prefer the Milwaukee having never had blade tension or tracking issues (until much later in tool-life… usually easily fixed with a replacement rubber cover for the band wheel ). The blade fence/table has a spring lock lever and is super easy to adjust mid-cut.


Just saying. I only recommend Milwaukee

RPF PREMIUM MEMBER
Thanks, gents. I'll hit up the Home Depot on Monday and see what they have. I have bottles of TAP cutting fluid (does anyone else love the smell?) and plenty of WD-40 on hand should I need it.

Should push come to shove, I have a guy up the road that's a professional fabricator/metal-worker that works out of his garage that might be able to do the job.

RPF PREMIUM MEMBER
I actually have gallons of oil they put in the air conditioning systems, my uncle gives it to me by the quarts.

I've been trying to keep this hush for a bit now, but those that follow me on Instagram may already know, with the friendly participation of vadermania, I am now producing lineage casts.

Vadermania, for those need reminding and for those unawares, owns an original cast made for production of Star Wars back in 1976, which he had modified it to resemble the V3 stunt hilt back in the mid-90's. Very recently, he has had it 3D scanned and had his own replicas produced and even had it laser scanned to find out its composition. He has been very gracious in sending me a copy of this 3D scan to reproduce the original hilts as they were.

I re-scaled his scan back to the original wood master's size and have restored all the details back to its original state, erasing the
casting blemishes and work that has been done to it over the past 46 years; all so they may be controllably lost again when I cast them, as the original was want to do.

There is no more guess work for the buck to make these casts. Short of restoring the original wood buck to make these, these cannot be any better. I'm trying to produce one a day and there's still some things I need to test on the finishing end before I revamp my project run. I was hoping to have more to show but I just can't keep it secret any longer!

Lastly, here the current two casts I've got in my possession from the restored master. Now, the originals, as found out by LOM and Vadermania, were made of 4145---brazing wire. Brazing wire and the casting Al I'm using are similar in composition, the biggest difference is that a356 (what I'm using) has 10% more Al than Si, as brazing wire does. Brazing wire, in the amounts I'd need to get them in to cast the amount that I need, is financially unfeasible for me, and the amount that I need to melt in one setting is hazardous just working outside of my garage. Si--specifically its gas when melted--is poisonous and is heavily regulated as it is. I am not going to endanger my health making these (any further) nor would I ask anyone else to either.

Mentally working on cleaning things up stairs.. still got things to work out

RPF PREMIUM MEMBER
Awesome work.
Major gratitude to you; vadermania and LOM for a multifaceted understanding of this prop composition, geometry, and casting process